A Renault Megane RS275 Trophy-R is not a very good minibus, and the AMG GT?

Simply appalling for the bi-annual IKEA trip. Meanwhile try to fit three kids and a Labrador in the back of a Jaguar F-Type and you’ll sooner see them all driving away in a van from the Department of Child Services.

Point is, compromise is a part of life for lovers of performance cars. You either concede practicality, or performance. But one car has given us hope it doesn’t always have to be this way.

Truly we struggle to think of a car that blends performance and practicality quite as effectively as the new Mercedes-AMG C63 S Estate. You get an enormous boot, made truly cavernous by folding down the rear seats. Oh, and you get rear seats. That people with legs can sit in. 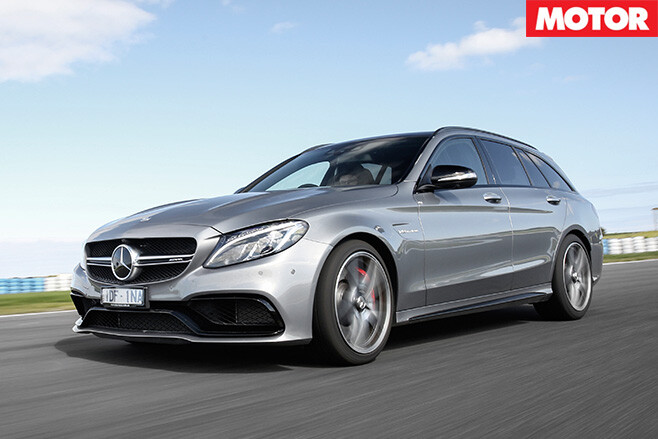 And you get performance. Oh, glory, the performance. But first, let’s recap. It all could have gone horribly wrong with the new C63. The last one was legendary, particularly in its swansong, SLS-powered 507 guise, where a thumping 6.2-litre V8 cranked out a stunning 373kW and 610Nm without an exhaust- or belt-driven air pump in sight. “One of the greatest engines ever,” we fawned.

And it had the playful, friendly, competent chassis to match, even in wagon clothing, such that we gave the M156-powered C63 507 Estate four-and-a-half stars. So the new car had a lot to live up to, not least because the old C63 was the most successful AMG product ever, selling more than 40,000 cars worldwide.

Not helping the plight of AMG engineers, legislators were putting the old C63 in an emissions squeeze. Its 12.2L/100km couldn’t continue. So AMG lopped a massive 2.2 litres off the old engine’s capacity and nestled in its V8’s vee a pair of exhaust-scavenging snails. The M177 was christened, saving an astonishing 3.5L/100km compared to the previous engine. And in kind, saving the C63. 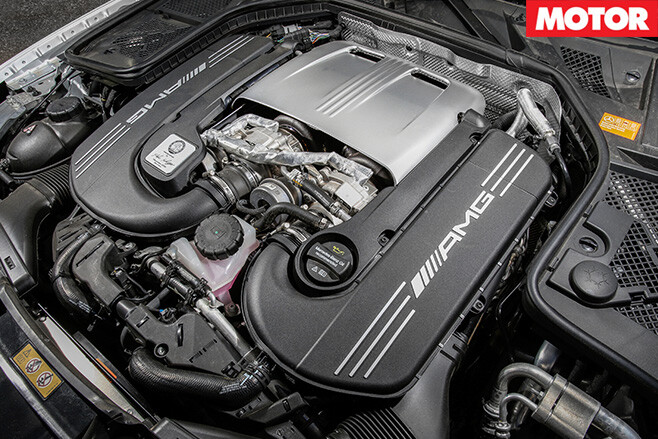 Let’s be honest, matching the power outputs was always going to be a cinch, even with ‘just’ 4.0 litres. Turbos pump 17.4psi boost to create 375kW at 5500-6250rpm, but, even more impressive, 700Nm is ready to rumble from just 1750rpm. The new engine, on paper at least, boasts a flexibility the old nat-atmo donk could only dream of.

The new C63 S benefits from a vastly improved C-Class chassis, too; more rigid and safer, but shedding 65kg from the old wagon. The C63 S Estate comes in at 1730kg, or 75kg more than the sedan.

There’s more tech, as well, and not just by way of the electronically-locking, computer-controlled differential, but with the S-Class’s self-steering cruise control trickling down with myriad other convenience gadgets. The C63 S now gets magneteorhelogical adaptive engine mounts, too, which can be firmed for better response and agility, and relaxed to better isolate the cabin from vibration and noise. 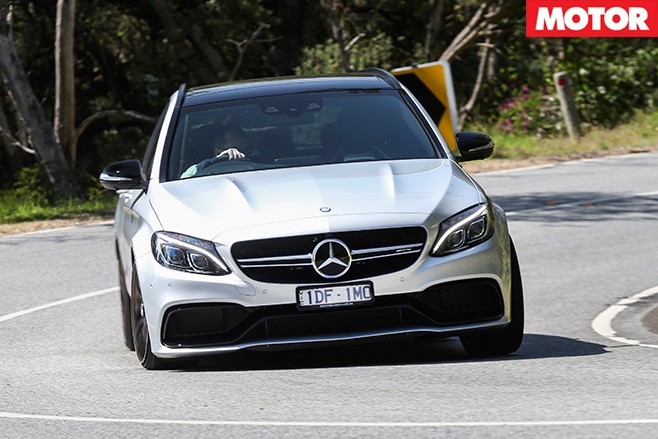 Australian C63 Ss get standard goodies that are otherwise optional overseas, like AMG’s Performance Exhaust and Performance Seats, which look serious, are firmly padded and cosy-fitting. They’re the first hint the C63 S confidently plants its flag on the fast side on the performance-comfort spectrum.

The second hint is the business-meaning Alcantara steering wheel, usually the reserve of cars like 911 GT3 and Megane Trophy-R. Rather hardcore for a family truckster. And yet another example of the duality of personalities of the C63 S when, after firing it up, the air-conditioning dusts you in sweet-smelling perfume. Like it’s trying to say something.

Just in case you missed it, there are no fewer than nine AMG badges in the front row alone and even more aft. But otherwise the C63 S’s interior is a classy place to sit. Meanwhile your blind mates (no, not the ones who’ve had half a slab each) will tell it’s a C63 S when the thing is burbling like a Messerschmitt fighter. AMG has clearly worked weekends to ensure a pair of turbos hasn’t wrecked the C63’s snarl.

Apply clog and it only gets better. The first time you open the taps, all anxieties about the switch from 6.2 litres to 4.0 evaporate. Moving away smoothly thanks to the wet-clutch auto, the C63 bellows a nasty, gurgling V8 note, lower in pitch and all tailpipe.

Put the windows down and you can hear some turbo hiss, particularly if you’re asking the engine to strain against a tall gear in the lower revs, but otherwise there’s little induction noise and high-rpm scream here. The new C63 S is definitely a baritone. And it sounds ace, with a certain hot-rod quality about its note. 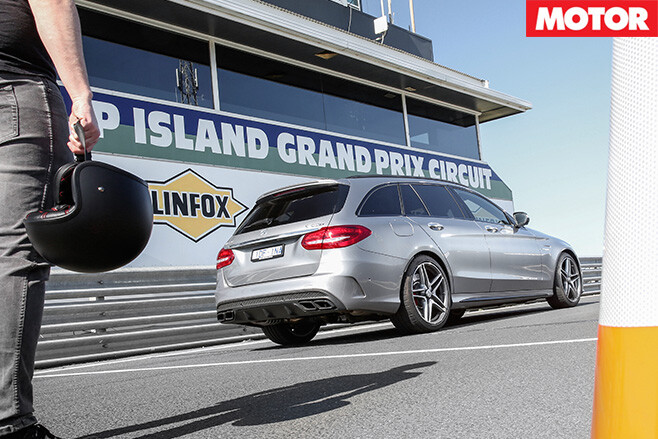 Said note is such a big part of this car’s personality, in fact, a V6 C63 just wouldn’t work. A few hundred metres down the road and we’re thinking: the new C63 S Estate is our kind of car. There’s enormous torque available in the lower rpms, such that it’s fun in any gear at any engine speed. Apply an ambitious amount of throttle in first gear in the dry and the C63 S will spike revs and brap its V8 as it squirrels on its rear 265s. Yes, please.

Like the old C63, AMG doesn’t offer a manual ’box, but, like the old model, the new one doesn’t necessarily need one. The seven-speed MCT Speedshift auto swaps up gears swiftly and will pop and crack as it grabs revs on downchanges. Nowhere near as laser-sharp as a twin-clutch, but it’s more than up to the task.

It’s a shame that further down the road we find ourselves double checking the C63 S is in Comfort mode, the car transmitting more of the road surface to our derriere than we’d like. But it seems this is as soft as the dampers get, like the throttle and tranny are in Comfort but the suspension’s stuck in Sport. Somehow we don’t think you’d get much of an apology from Herr AMG. And it only takes a few corners to see why. 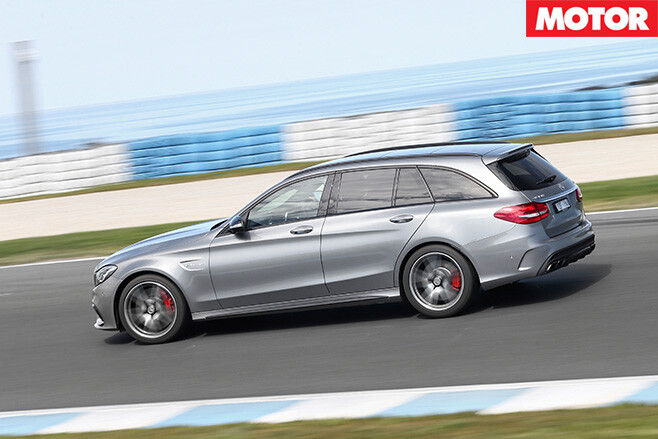 The C63 S is appallingly, devastatingly fast, with a comedic amount of grunt. From low rpm to redline it just hurls forward without lag or fuss. Mercedes-AMG claims 0-100km/h in a launch-control-assisted 4.1sec (0.1sec slower than the sedan; 0.2sec quicker than the old 507 Estate) on to a limited 250km/h.

We didn’t get a chance to performance-test the C63 S Estate this instance, but we’ve no reason to doubt Merc’s numbers. It feels every bit as fast as you might expect a car with 700Nm at 1750rpm and 375kW ought to be. In fact you wonder if AMG missed a row of cylinders when adding up the displacement.

Just like its sedan sibling, few cars less than $150K will be able to keep up with a C63 S Estate on a windy road. It’s certainly effective. And yet easy and friendly to drive quick; the ESP in Sport Handling mode permitting throttle-induced tail-wiggles out of uphill hairpins, easily caught by well-weighted, accurate steering. In the slower stuff it can start to show its heft and, indeed, its natural habitat feels to be more flowing roads where it can really stretch its legs. 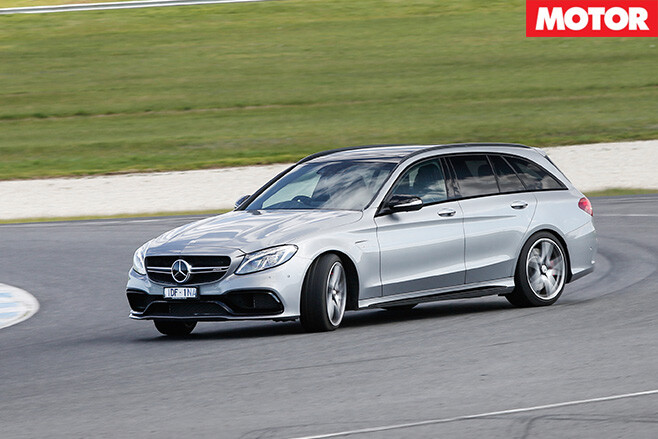 To make sure, we infiltrated an empty Phillip Island during the lunch break of an AMG Drive Day and our suspicions were confirmed. Our time on-track was brief but the C63 S, switched from Comfort mode to the C63 S-only Race mode, felt to exhale as it was unleashed on the longer straights, before attacking corners in a way a family wagon simply shouldn’t.

In fact it was too easy to forget the enormous cavity behind one’s headrest as we belted around one of Australia’s best racetracks, the C63 S showing off fantastic power, strong, fade-free brakes, and accurate steering complementing a stable cornering attitude.

Of course, understeer was amply available if you used up everything the front 245/35R19 Dunlop Sport Maxxes had to offer. But drift enthusiasts will be pleased to hear that, ESP off, the C63 S is entirely up for sideways action, torque easily unhinging rear rubber with the aid of the C63 S-only electronically-locking diff. And yet afterwards you could take the thing to Woolworths and fill it with more groceries than you’d know what to do with. The C63 S Estate truly proves that practical performance is possible without compromise. In fact there is so much performance on offer, AMG could feasibly fit the carbon-ceramic brakes and cup tyres and call its C63 S Estate a Black Series and get away with it if it so wished. Certainly then the firmer ride would make sense.

The C63 S might be a poor minibus, a worse removalist van and not the most ideal IKEA companion, but it’ll have a crack at each. When its chores are done, the kids and Labrador dropped off, it can satisfy and terrify you on track or road in equal measure. And you didn’t even have to buy a performance SUV.