The Mazda MX-5 and Abarth 124 Spider represent the ultimate in affordable sports driving, with lightweight frames, punchy engines and excellent ride and handling.

The 124 Spider is based heavily on the MX-5 and built at Mazda’s Hiroshima factory, however, their differences extend beyond their badges, with the turbocharged Abarth roadster offering a brasher Latin alternative to the elegant Mazda. 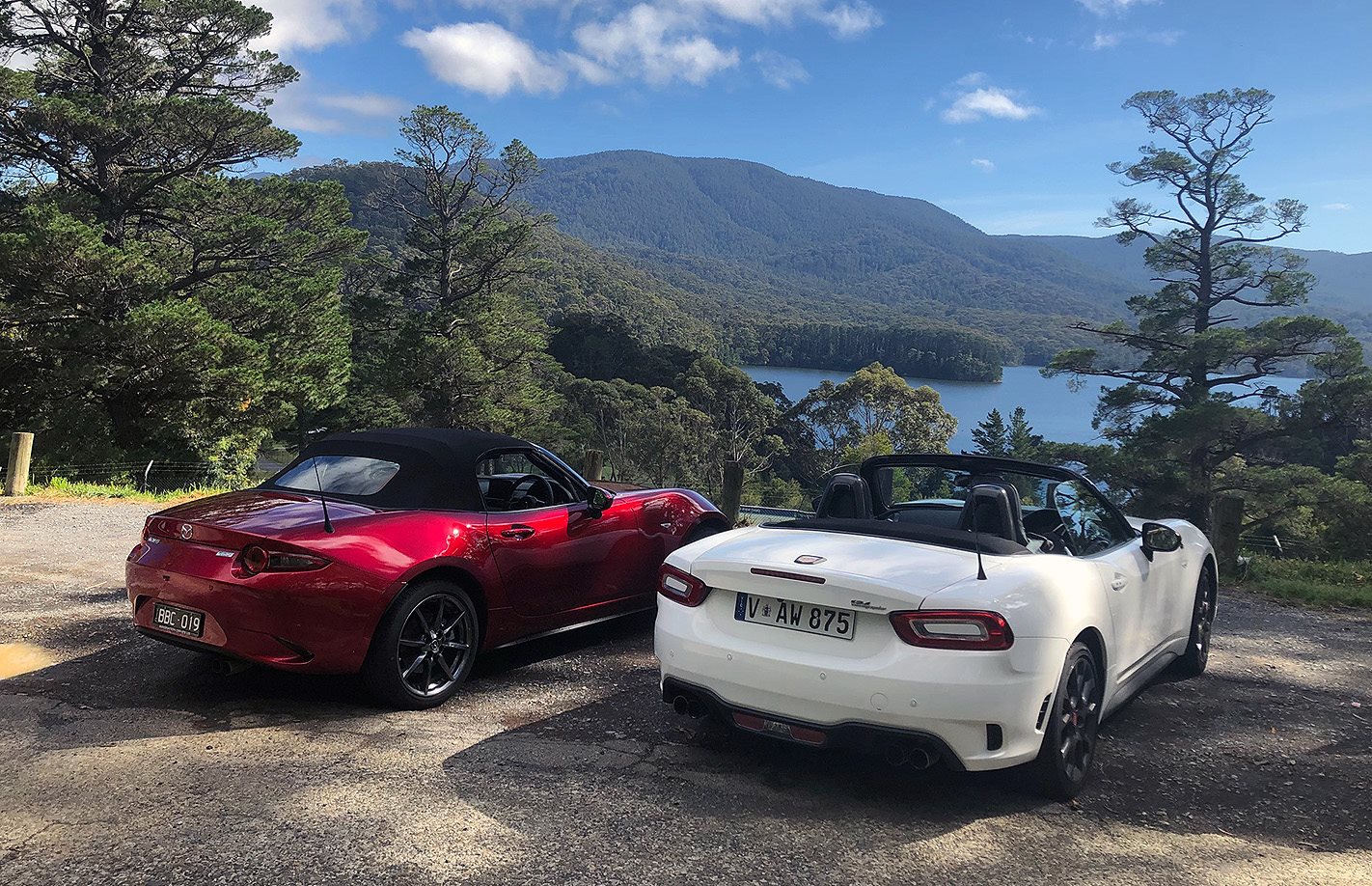 How affordable are they?

The six-speed manual MX-5 Roadster GT retails for $43,320 and sits between the less powerful 1.5-litre MX-5 Roadster ($35,390) and the manual version of the MX-5 RF GT ($47,400) with the hard-top folding roof. Automatic versions are available for each variant for an additional $2000, but you’re best saving that money and sticking with the entertaining manual. 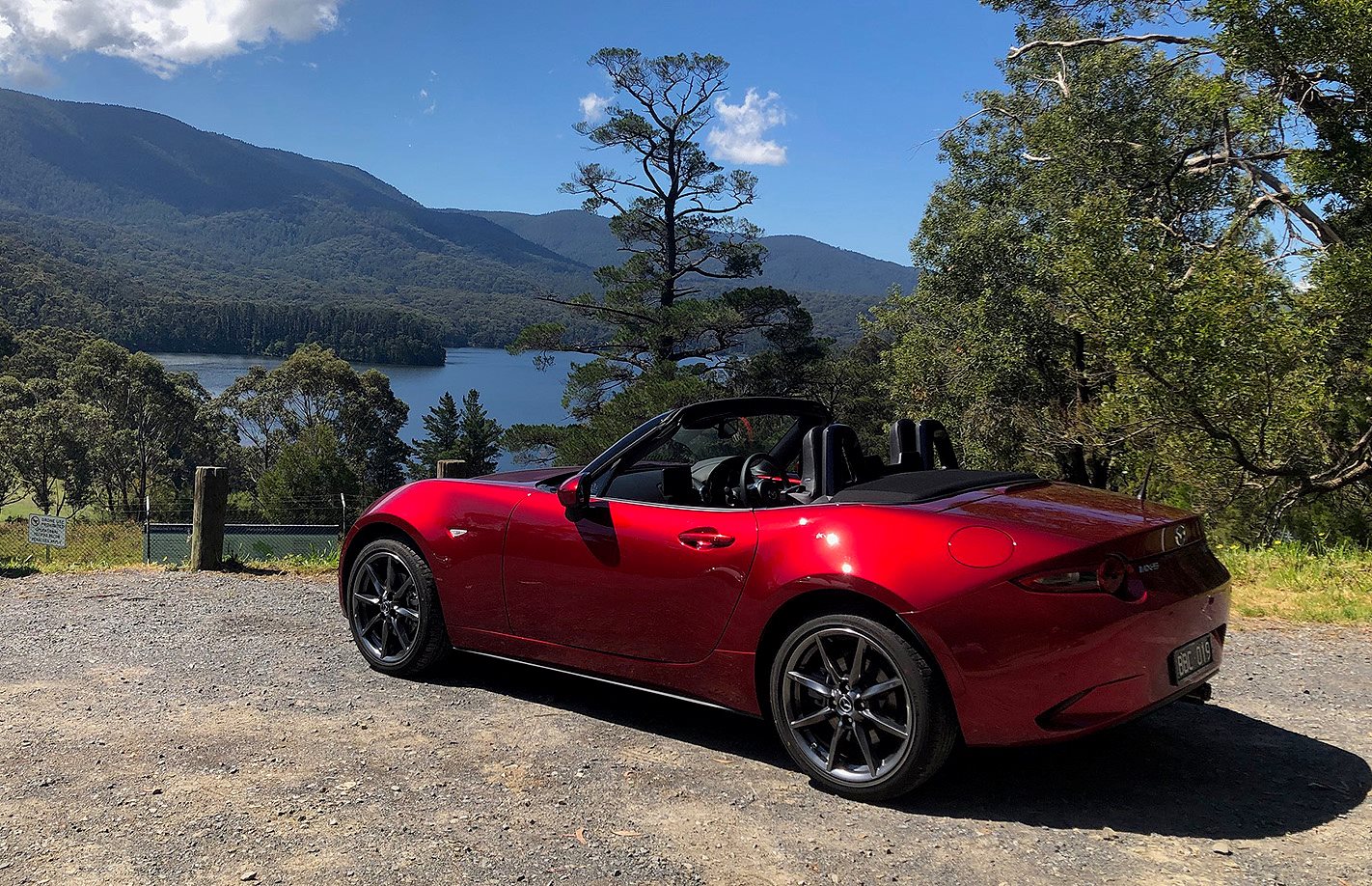 The MX-5 GT’s price is all inclusive with the only option, apart from accessories, being premium paint.

Featuring the same manual gearbox as the MX-5, the Abarth 124 Spider is priced from $41,990 with the same $2000 premium placed on the automatic version. However, there are extra-cost options such as the $2490 Visibility Pack that adds LED auto-levelling headlights, LED daytime running lights, adaptive headlights, rear-parking sensors, blind-spot detection, rear cross-traffic alert and headlight washers, most of which are standard on an MX-5. 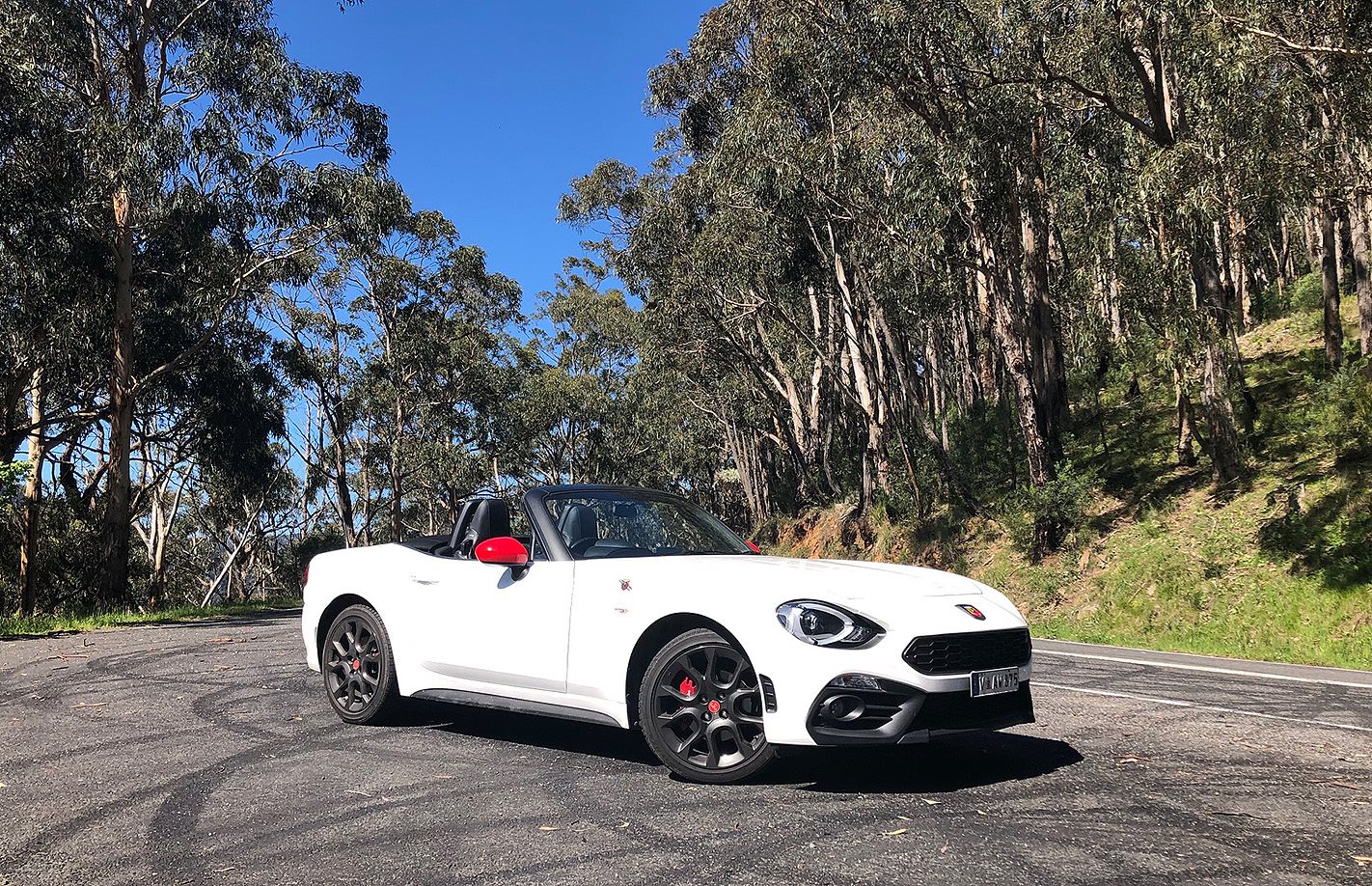 The 124 Spider in this comparison is a special Monza Edition that includes the Visibility Pack and other extras including two-tone leather Recaro seats, beefy Monza exhaust and bespoke wheels for $47,580.

What features do they have?

Even with the Monza pack, the 124 Spider misses out on key features introduced to the MY19 MX-5 Roadster GT including forward and reverse autonomous emergency braking, traffic-sign recognition, reach-adjustable steering wheel and Android Auto/Apple CarPlay. It does, however, have sportier Bilstein suspension and Brembo brakes. 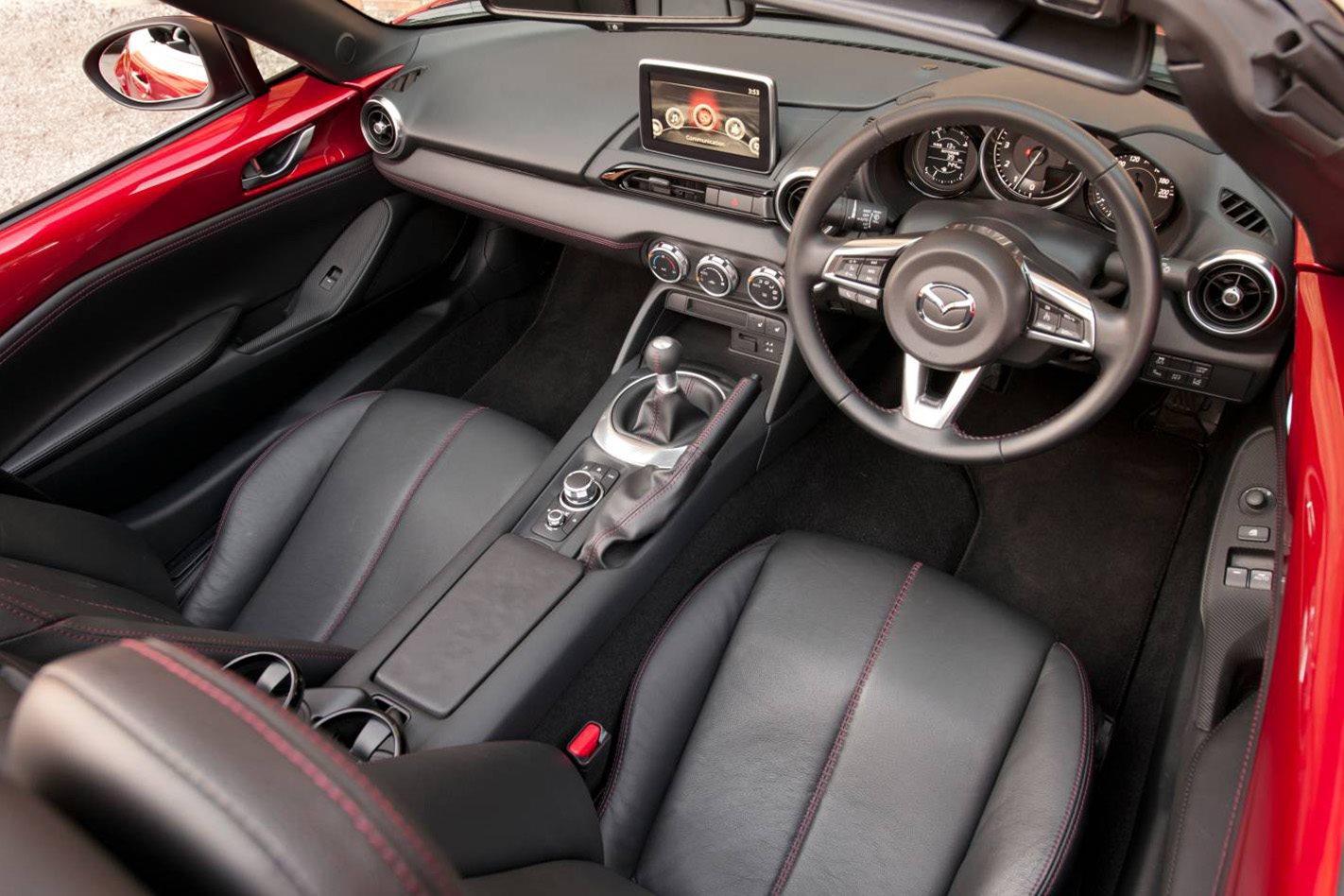 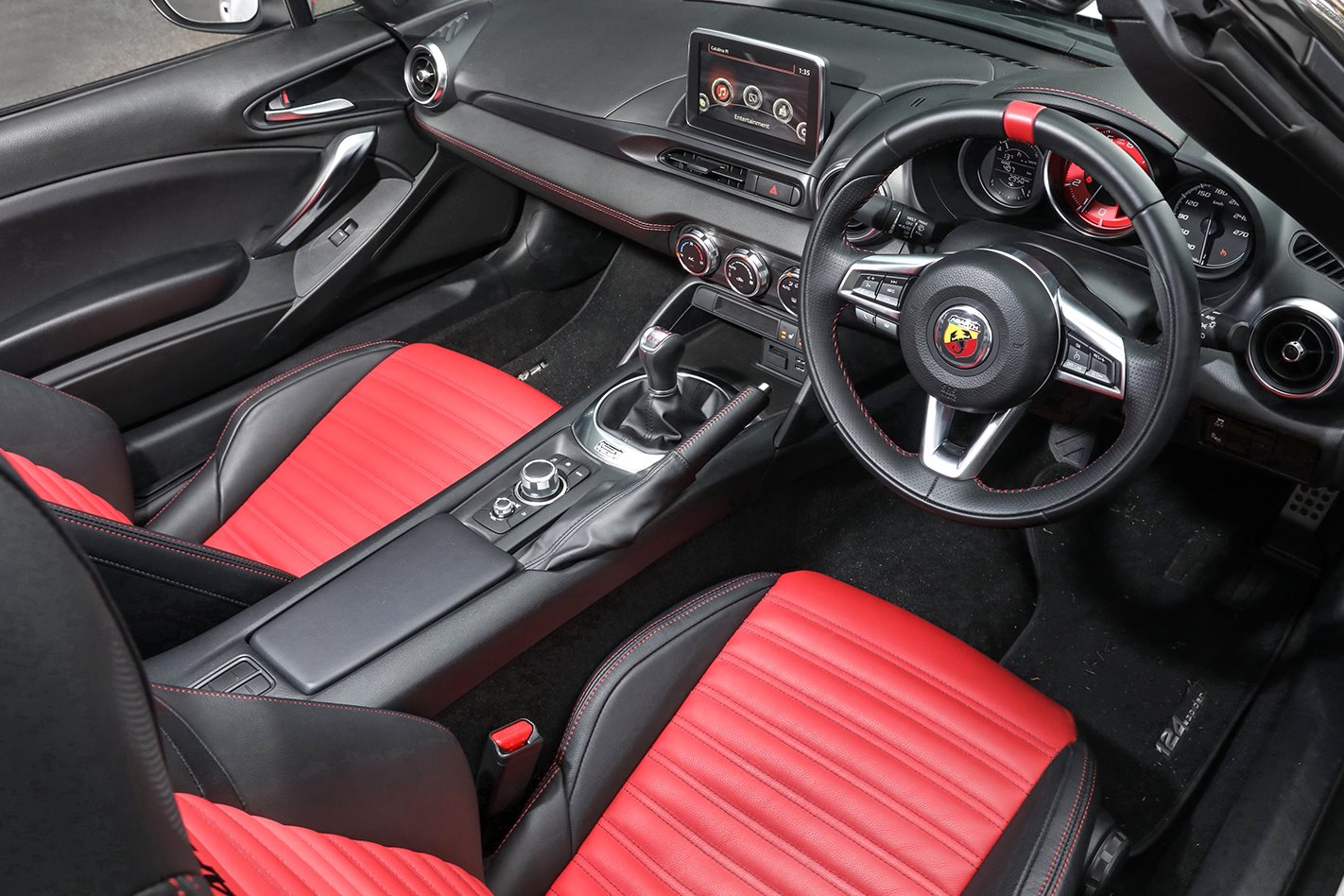 The Abarth 124 Spider is covered by a three year, 100,000km warranty, while the MX-5 GT has a five-year warranty with no limit on kilometres driven.

How safe are they?

The MX-5’s safety package significantly improved with the 2019 model, with the introduction of a reversing camera, autonomous emergency braking, and traffic sign assistance to help you with identifying the speed limit.  This is on top of other standard active safety features including blind-spot monitoring, and rear-cross traffic alert that warns you of any vehicles approaching from the side while you’re reversing

The MX-5 GT also has lane-departure warning, and adaptive LED headlights that adjust their beam depending on the MX-5’s speed and movement. 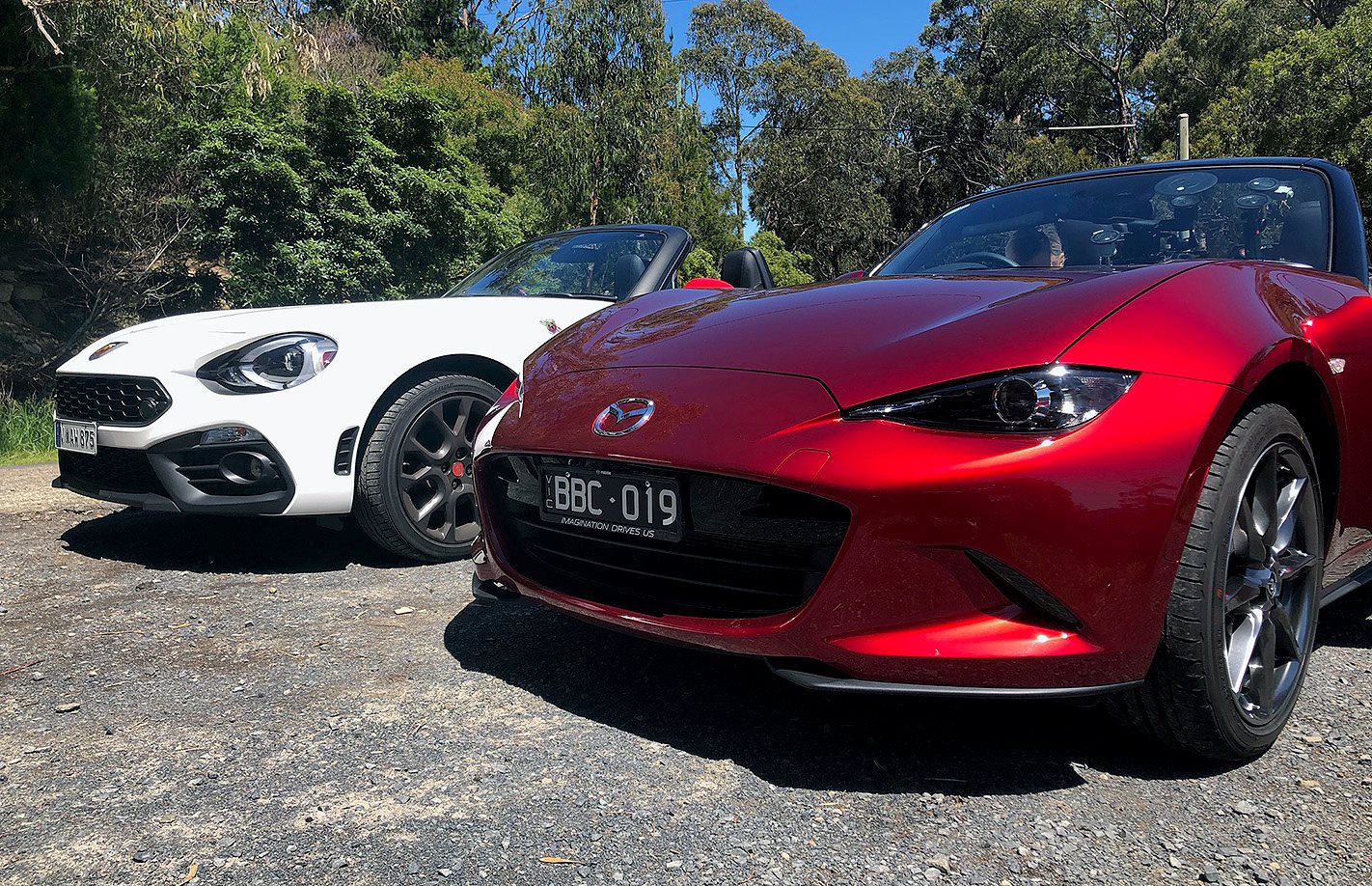 Of these, only the reversing camera is standard kit in the 124 Spider, with blind-spot monitoring and rear-cross traffic alert and adaptive headlights part of the Visibility pack.

Each car as has also a rollover hoop behind each seat that, with the strong windscreen pillars, give some protection in rollovers. There are four airbags, two front and two side, protecting the driver and passenger.

Both are extremely fun to drive, especially when you find some bendy roads. Their low ride makes you feel like you’re going quicker than you are which allows for a thrilling drive within the speed limit.

The steering feels like an extension of your arms, with the front wheels facing exactly where you point them, helped by the taut chassis and overall light weight. The short-shifting six-speed manual shared by each car is excellent, though I had to manage the Abarth’s clutch pedal a little more carefully in first gear to avoid stalling.

Performance and ride quality are where each car mostly display their different personalities. 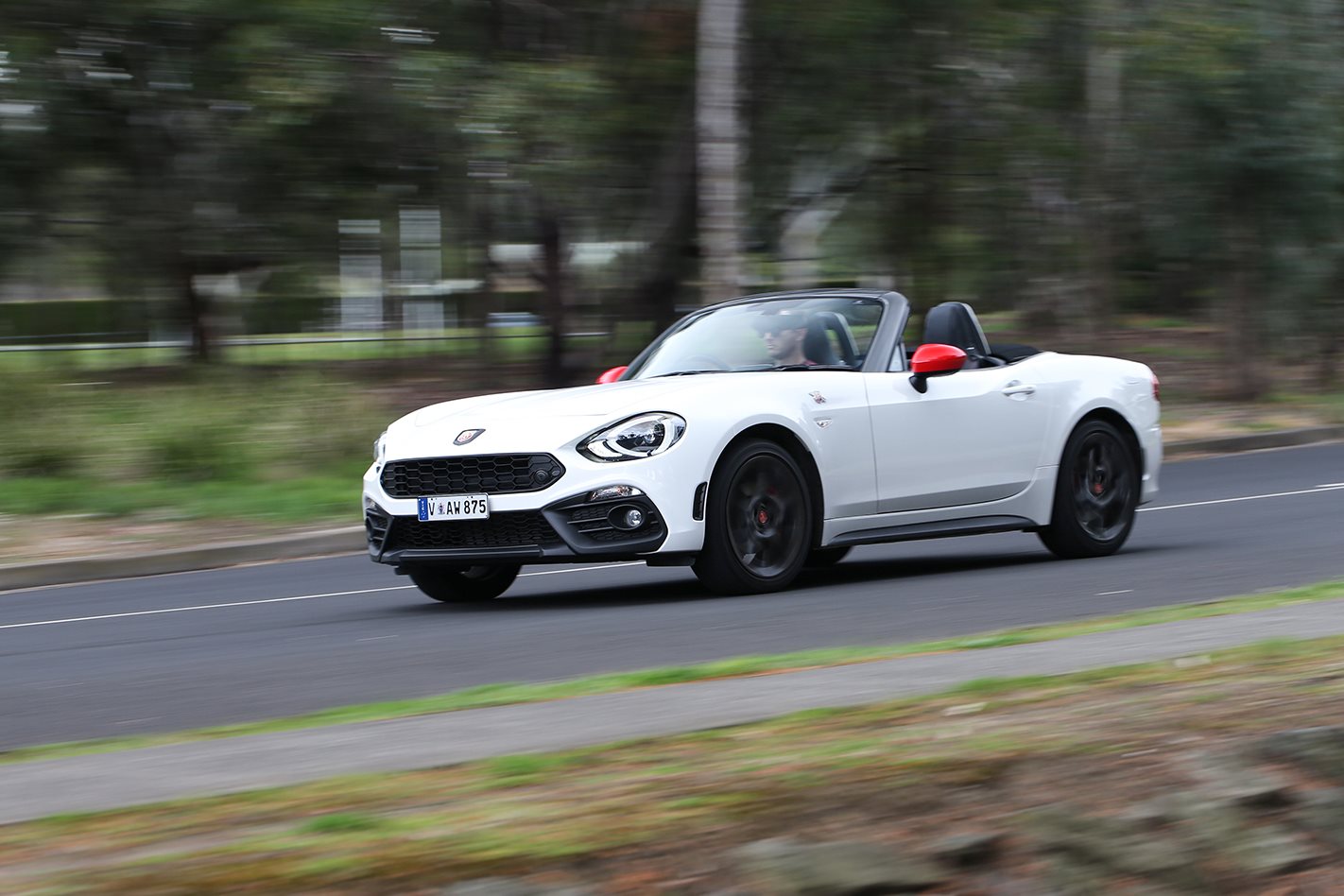 The Abarth’s turbocharged engine produces more torque than the MX-5’s, which means it lurches off the line quicker despite a little turbo lag. The MX-5 is almost opposite. It’s still lively, but it holds power for longer at higher revs, while the 124 begins to peter out as you continue to accelerate requiring you to change gears sooner.

The Abarth’s Bilstein suspension is noticeably stiffer than the MX-5’s, but it’s what you expect from a sports car and not particularly uncomfortable. The MX-5 offers a considerably smoother ride though, which does little to compromise handling. Where sometimes the Abarth’s back wheels will want to flick out of the turn to straighten the ship, the MX-5 feels more fluid. 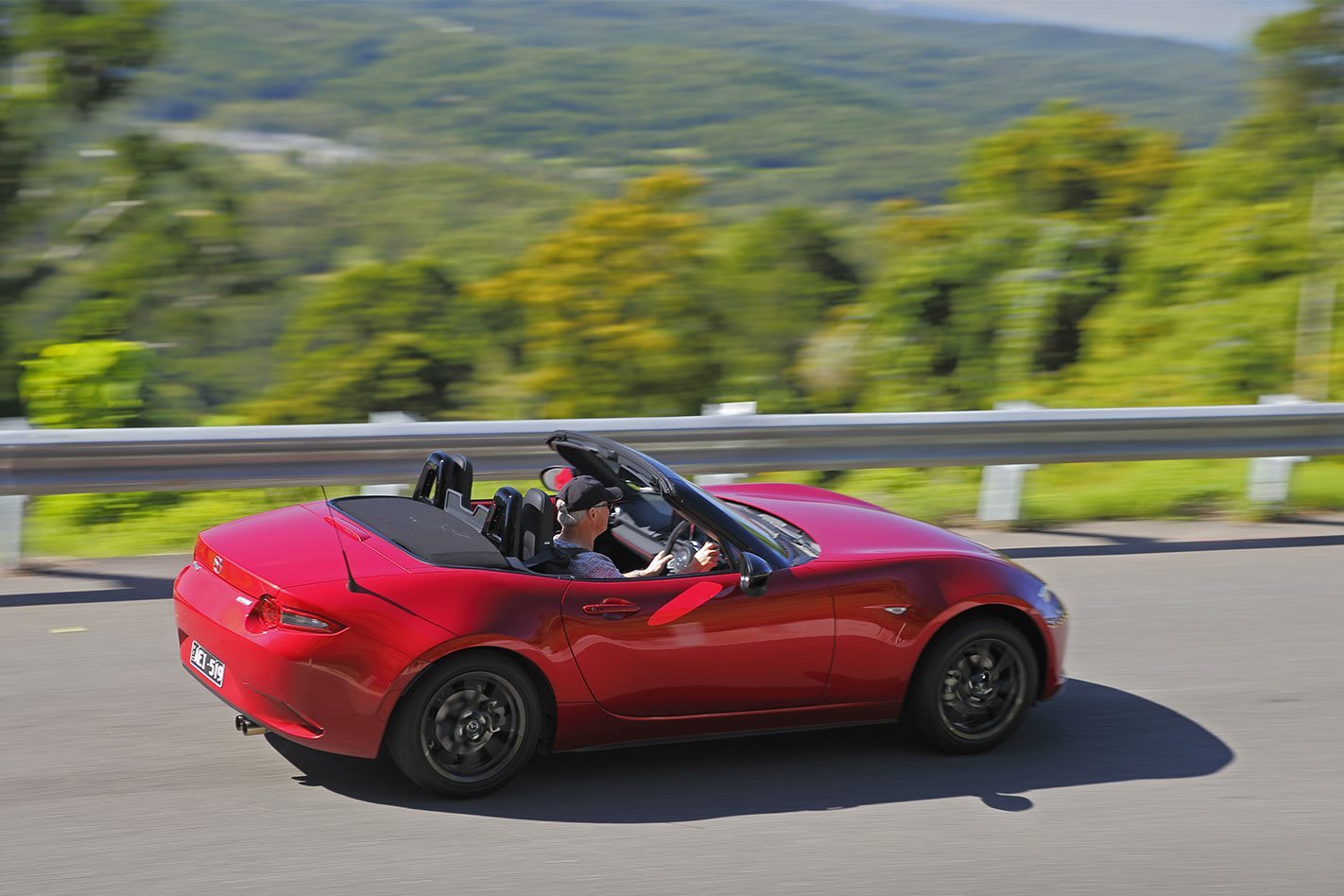 The driving position in each car is excellent, however, taller folk will appreciate the MX-5’s reach adjustable steering wheel even if doesn’t make climbing in and out any easier.

Driving each through the hills overlooking Victoria’s Yarra Valley, it’s difficult to pick which of these roadsters I’d rather drive, though the Abarth’s raspy exhaust note did stretch my smile a little further. It’s only when you leave the hills for the highway that you realise the MX-5 has the overall edge.

If the Abarth 124 had the same equipment levels as the MX-5 GT you simply could consider it a turbo MX-5 with the key differences coming down to ride and performance. It’s a joy to drive and its broad sculpted bonnet and retro-grille attract plenty of attention. If you want to stand out from Australia’s sizeable MX-5 gang you’ll have few regrets if you follow your heart and choose the Scorpion badge. 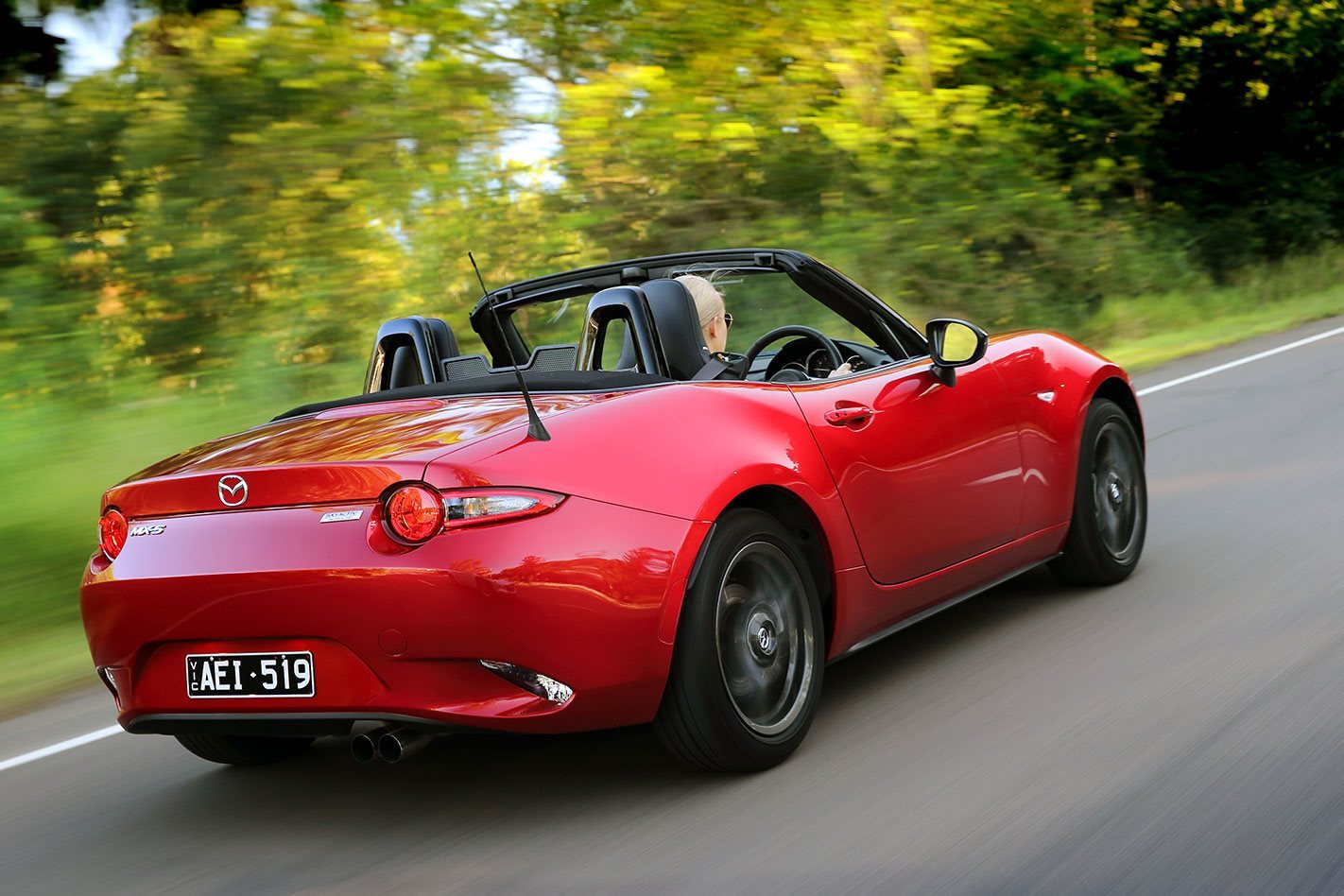 However, the Mazda MX-5 Roadster GT, with its lower price, superior equipment levels and longer warranty, is the better value buy, while being equally enjoyable drive.

Since the first MX-5 arrived in 1988 it always stood out as a reliable roadster that doubles as a loyal daily driver and fun weekender. The latest version continues to strike that balance lacking little in terms of modern creature comforts, while still offering the same old-school driving thrills. 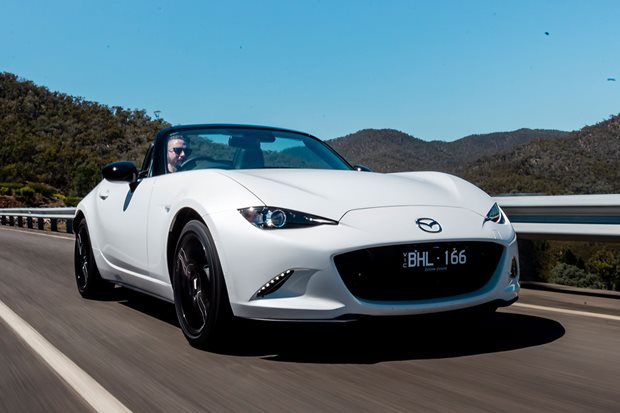