UPDATE, February 15: Hyundai has teased its all-new Ioniq 5’s interior ahead of its virtual world premiere on  February 23, 2021.

The Ioniq 5 will be Hyundai’s first battery electric vehicle (BEV) model to utilise the Electric-Global Modular Platform (E-GMP), which enables a spacious and customisable interior.

According to the Korean carmaker, this means it can offer personalised mobility with flexible configurations to comfortably accommodate both passengers and cargo.

We can’t see how spacious the interior is, but SangYup Lee, Senior Vice President and Head of Hyundai Global Design Centre, said the Ioniq 5’s interior design offers an optimistic look at what customers can expect in the new EV era.

“The long wheelbase is translated to a new dimension of space. We designed this special space as a perfect place to recharge, your home away from home.”

Hyundai says Ioniq 5 elongated wheelbase and the flat floor will allow the driver and passengers to freely enter and exit the cabin on either side when parked in a narrow spot, as the centre console will be able to slide back and forth.

The ‘Universal Island’ centre console also offer greater function than a static storage box and will become the centrepiece of the vehicle’s ‘living space experience’.

The driver and front passenger seats also have leg rests that allow occupants to ‘relax and recharge’ while their vehicle is being charged.

All seats can be operated and repositioned during this time, making it easier for adults in the front to care for children and pets seated in the rear.

January 13, 2021: Hyundai's Ioniq brand has dropped a couple of teaser images and vids of its incoming Ioniq 5 electric SUV.

Some small physical details - like the presence of a clamshell bonnet and the fitment of 20-inch turbine-style rims - were included.

It confirms that Ioniq's design language will not follow that of its parent company, instead forging its own sharper, more stylised path.

Hyundai also released a brace of teaser videos that point to the Ioniq 5's ability to be used as a power source for household items, one of which we've added above.

Despite its heavy camouflage, the sleek fastback-esque lines and minimal overhangs help to identify it as the Ioniq 5, which will be the first car from Hyundai’s new electric sub-brand Ioniq.

Hyundai tells us that the Ioniq 5 landed in Australia in December, and is here for “testing and evaluation”.

We also understand that the Ioniq 5 is a lot closer to market launch than we originally thought.

A global reveal of the car without camouflage is expected soon, and the five-door electric crossover will arrive in Australia sometime in 2021.

Hyundai’s current electric cars, the Ioniq hatch and the Kona EV, are based on conventional vehicle platforms, but the Ioniq 5 is the first to ride on the Electric Global Modular Platform (E-GMP for short), which can be tailored to produce electric cars of various sizes.

Product leaks from Hyundai’s own people suggest that the Ioniq 5 will be offered initially with two electric motors producing 230kW, backed by a relatively small 58kWh battery that can provide up to 450km of range.

A larger 73kWh battery pack will arrive later, which will increase the potential range to 550km.

It’s suggested, too, that the Ioniq 5 will have the capability to use 800-volt DC fast charging, which could recharge the lithium-ion battery from 20 to 80 percent in just 15 minutes.

It’ll also be able to use a 240-volt household socket to recharge (slowly) or an 11kW AC wall box.

MORE Apple and Hyundai in talks to build EVs

The Ioniq 5 rides on an enormously long 3000mm wheelbase, though, which means that it should have tonnes of room inside for passengers and luggage. 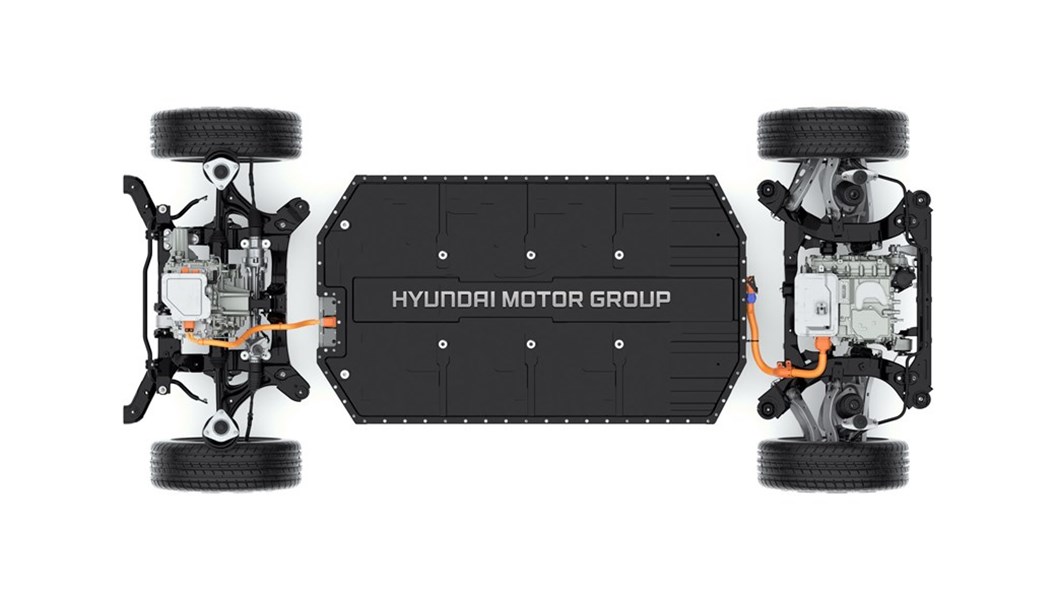 It could feasibly even be offered as a seven-seater, though we’d guess that a third row of seats would add a bit too much weight and size when the battery pack and the location of the rear motor are taken into account.