The BWA Golf R is a quick and useful street car and, to me, is the essence of what Hot Tuner is all about.

At a Wednesday night street meet at Sydney Dragway, the Golf has ripped through the quarter mile in 11.8sec at 188km/h and on the same surface but with different timing gear (the Driftbox timing equipment MOTOR uses is generally acknowledged to read around 0.3 second ‘slower’ than a dragstrip timer’s light beam triggering system) its best number was 12.09sec at more than 185km/h.

The other benchmark, heaving the 1500kg heft of the Golf R (yeah, all-wheel drive Golfs aren’t small-car light!) to 100 kays, is typically devoured in 4.2 seconds with Morley achieving one particularly sparkly run of 3.89s. Who would have ever thought VW’s replacement for the humble Beetle would have evolved to be a thing such as this? 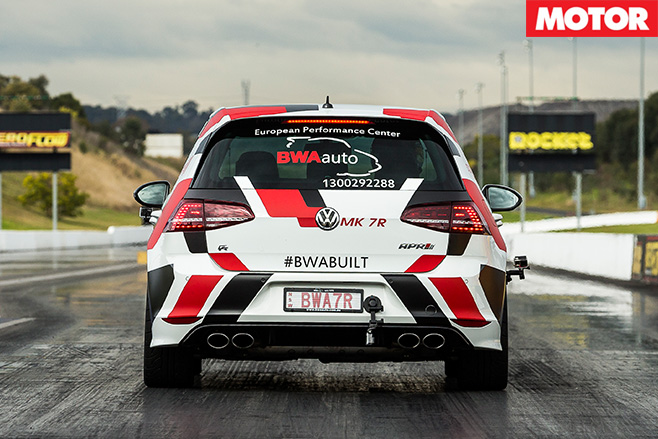 Not surprisingly, the confidence and competence of the all-wheel drive chassis meant the Golf was tidy on the tarmac too, with D’Alberto lapping the SMSP South Circuit in 1:04.8sec. Looking just at the results, the Golf is barely in the top half of the field, but that hides the car’s true competence.

I had D’Alberto’s words in mind as I strapped on my helmet, but you can imagine my disappointment when, after a few hours of better weather – and track drying-out time, in which we were able to run all the cars for our figures – it began drizzling almost the instant I opened the Golf’s door. Gawddamn… with wipers on, I stuck the shifter into D and wandered out onto the track…

As well as the KW suspension upgrade, there’s been a bit of other fiddling with the chassis too: a set of billet alloy upper rear control arms and a driveline brace between the trans and the subframe. Alignment specs – critical for a good handling car – are one degree of negative camber all round and seven degrees of positive castor up front, which helps with steering feel and keeps the front tyres’ footprint planted mid-corner for power-down and steering. 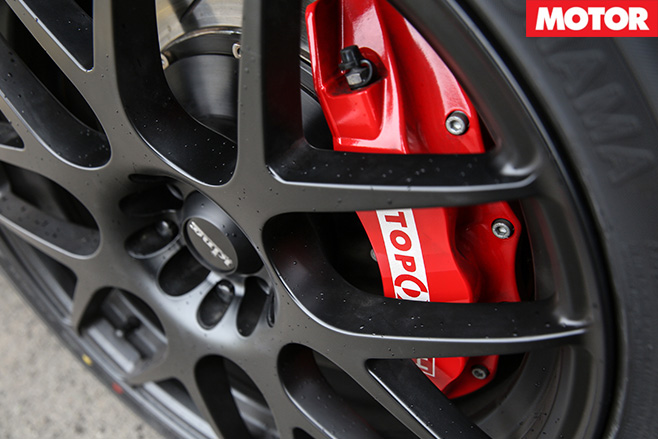 It all works. No matter what, this thing gets the grunt down hard, as anything like this needs to, to receive an 11-second time slip on a Wednesday night. I don’t mind admitting I’m not as experienced with fast all-wheel drive cars as some of my colleagues – and I can’t say I’ve driven too many 11-second ones! – but there are few vices or nuances with the way the BWA Golf R delivers its power.

However, although I found the steering to feel synthetically sharp, I didn’t quite find the apexes with the precision I expected; but hey, it was only five laps on a damp track and my brain is programmed with a fair degree of self-preservation, especially when I’m sitting in someone else’s pride and joy. Speaking later, BWA’s Craig Whyms mentioned that was more to do with his choice of semi-slick tyres – straight off the street – than any chassis set-up.

And gunning for such aggressive tyres was always going to be a roll of the dice with the weather. 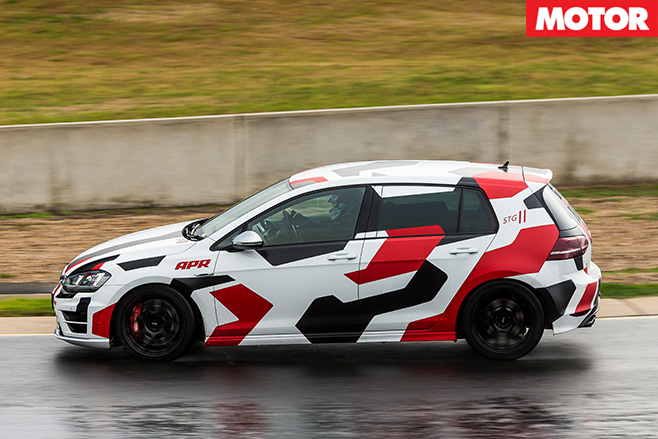 But the BWA-tweaked Golf R does it all in perfect comfort and with perfect manners for less than the price of a new Mercedes-AMG A45. Maybe in a few years, the idea of a reasonably roomy five-seat daily driver that can also function as a mid-week drag car, weekend track car and ski-fields express might just get me out of my ’76 Beetle… maybe.

Oh, and while it’s fourth outright at Hot Tuner 2016 for speed, the BWA Golf R does win something: the livery we’d be most likely to put on our own car. And that’s saying something. 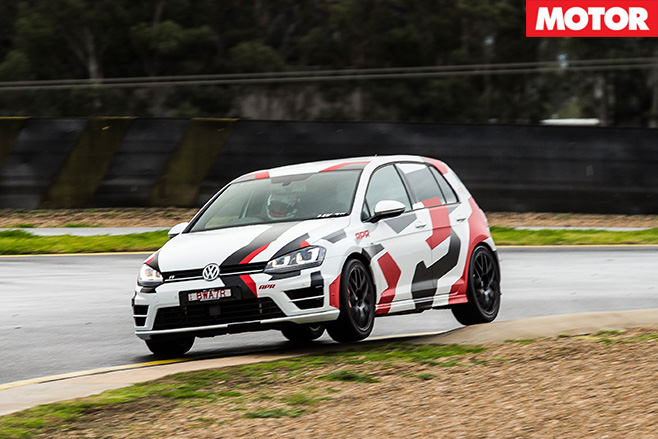 TONY D RECKONS
“Pretty forgiving in these conditions. You can have a slide with the car and still easily catch it. Power delivery’s very smooth but if you do get on it a little too early it tends to push the car off line. Reasonably easy to handle in these conditions, but still has plenty of go in a straight line, that’s for sure.”