“More than the sum of its parts. It’s not what you’ve got that counts, but what you do with it.”

All these cliches apply to Streetfighter’s SFP II Mustang, but don’t think we’re damning it with faint praise, for the proof of the pudding is in the driving.

Okay, I’ll stop now. Essentially, what it all means is that while the atmo Streetfighter didn’t necessarily light up the timing sheets in any particular area, its relatively mild, well-rounded approach nonetheless made it the top-scoring naturally aspirated contestant. 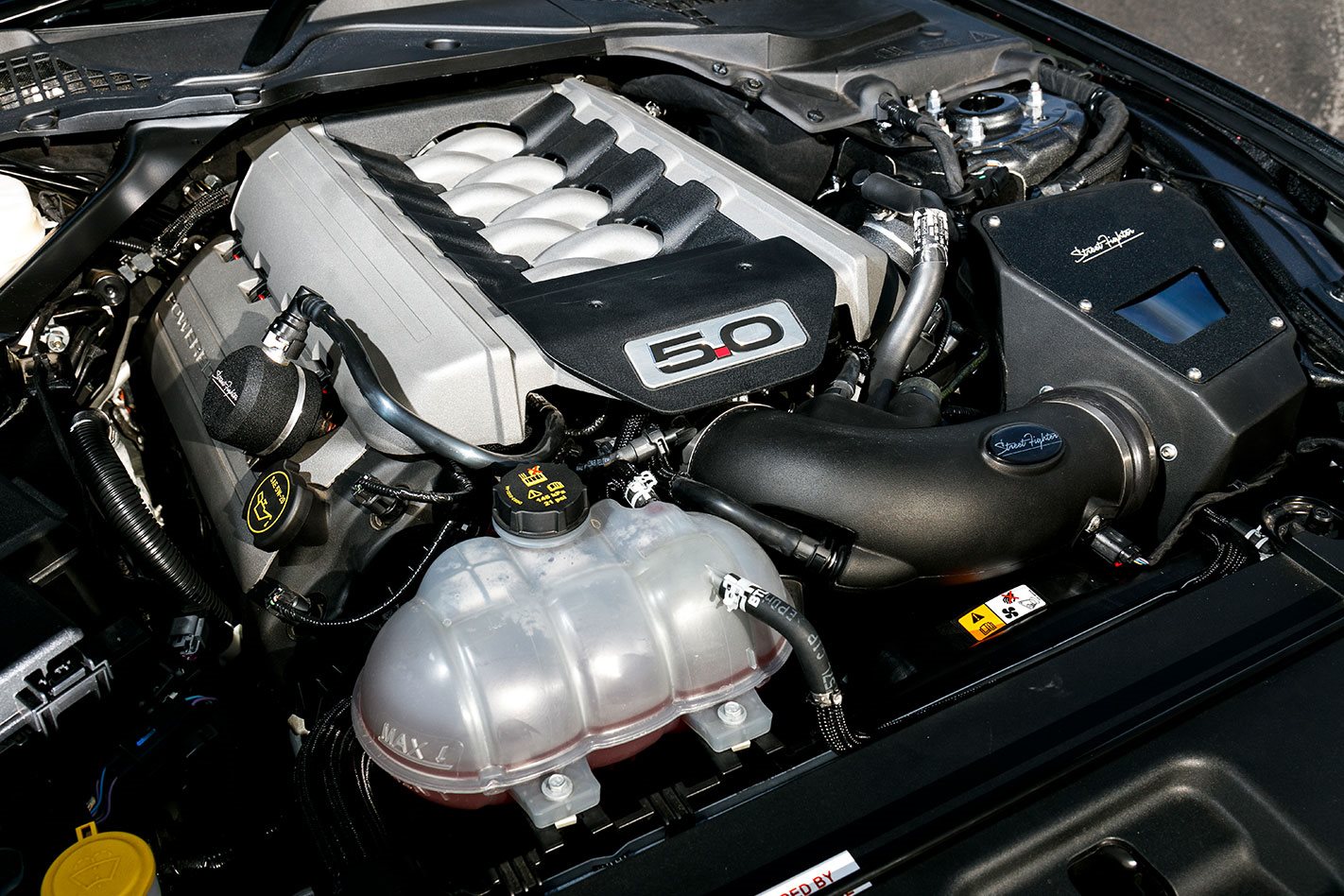 SFP III lifts this further to 427kW courtesy of a new intake manifold and 90mm throttle body, but Streetfighter boss David Roscio says Stage II is perfect for “somebody who wants a full exhaust system, they want the note, they want the increase in power [but in a] drive-away, turn-key sort of car”. The kit is backed by a three-year, 100,000km-limited warranty.

While fairly mild compared to some of the supercharged monsters also present (including Streetfighter’s own SF700s) the SFP II illustrates its power advantage over the standard car. The ice-cold track didn’t help its efforts to 100km/h but by the end of the quarter it’s 0.2sec and more than 4km/h clear of the standard GT and holds a similar margin in terms of lap V-max. 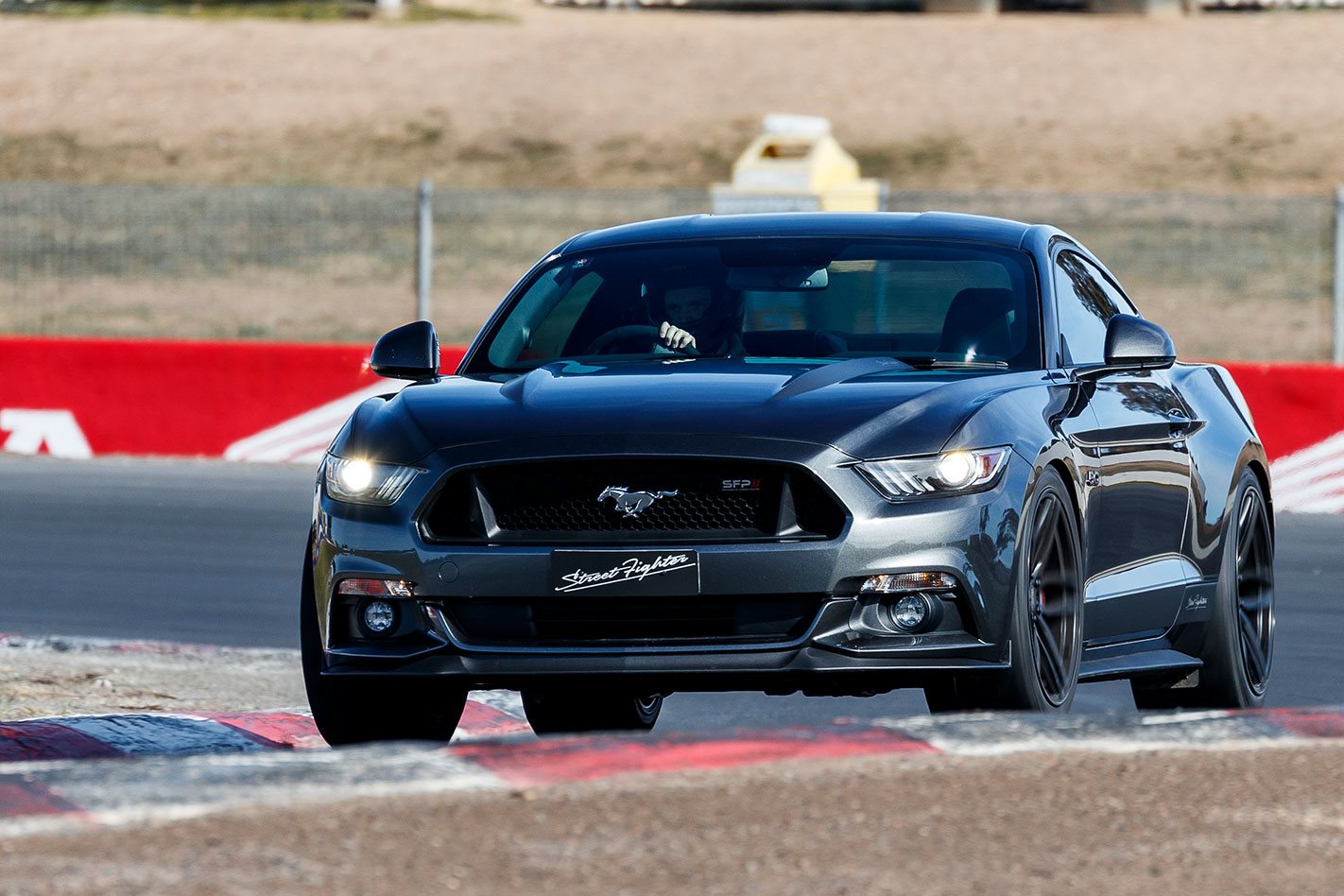 And it’s on track where this package really shines. Again, there’s nothing particularly radical going on under the wheelarches, but Streetfighter’s Handling Pack, which consists of lowered springs (-30mm) and heavy duty anti-roll bars from German company H & R, combined with its top-spec Dominator forged aluminium wheels and Toyo R888 tyres, make for a much more capable car on track.

Roscio admits that the R888 is a very focused tyre that’s not particularly suited to the street – mostly due to the unbelievable din it produces at speed – but for anyone keen on enjoying their Mustang on a circuit they make for a worthwhile investment. The Mustang’s fundamental balance is unchanged with a propensity towards understeer, however, the sticky Toyos provide a much more stable base to work from. 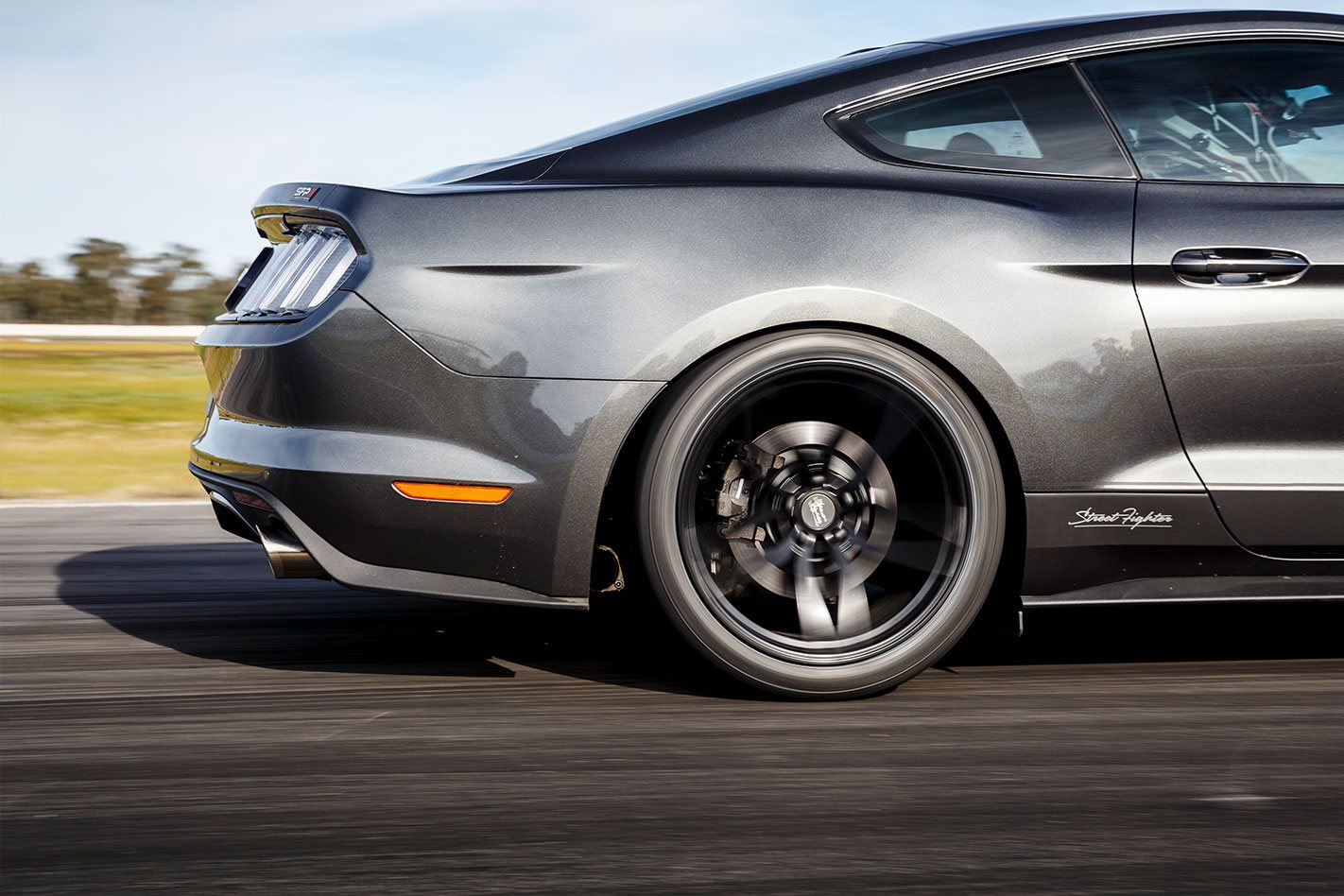 A cynic could say the extra mechanical grip is masking some of the chassis’s flaws, but who really cares when you can lean so much harder on the car under brakes, through an apex and on corner exit? The value of the Toyo rubber is evident in the unbelievable 33.93m 100-0km/h braking effort, the class of the field and more than four metres shorter than the standard car despite wearing identical brakes.

At this point you could be forgiven for wondering why, given the apparent success of its modifications, the Streetfighter Mustang only lapped 0.1sec quicker than the standard Mustang GT. 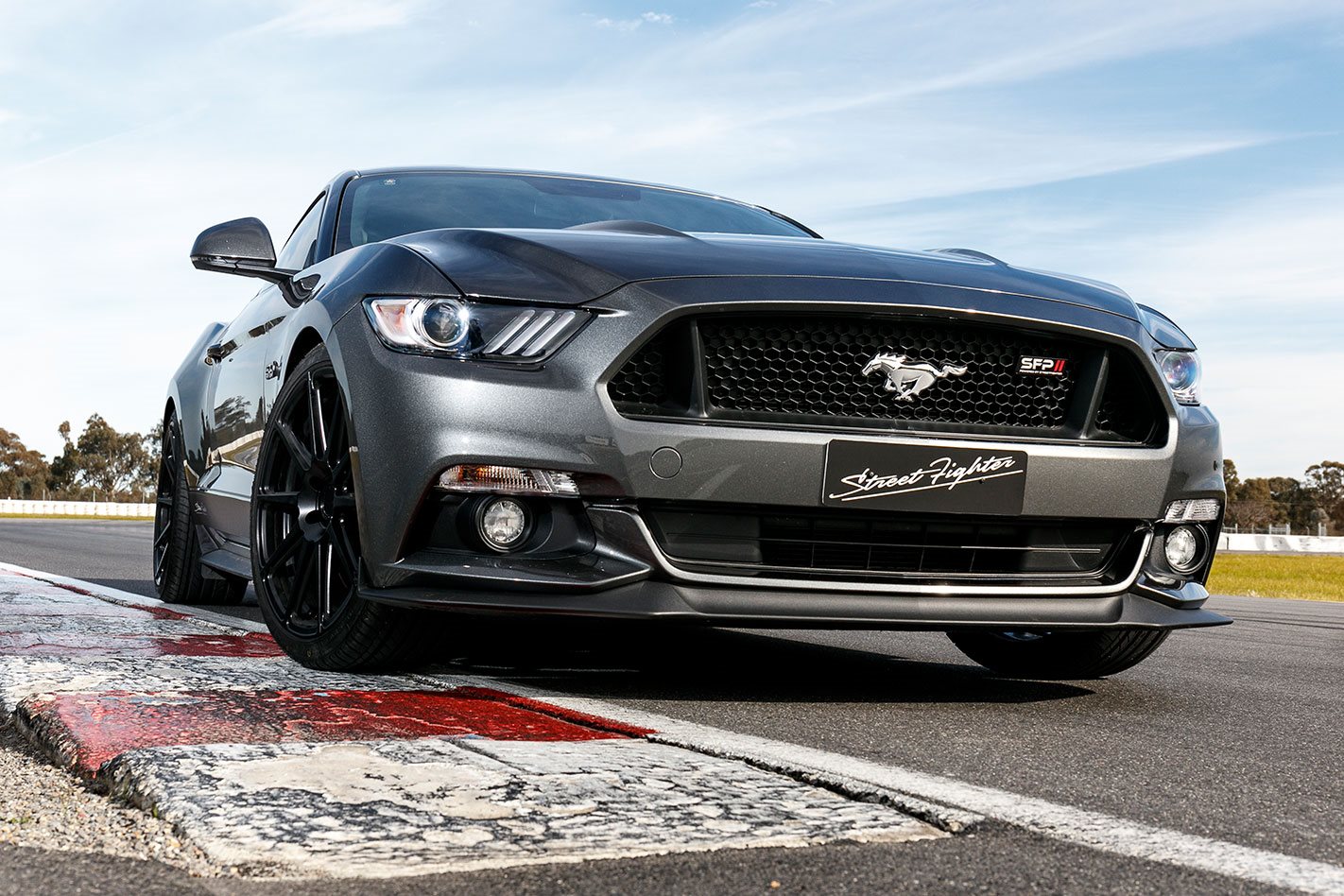 Unfortunately, on my final lap a huge plume of white smoke erupted from the back of the car half way through the sweeper; a quick stab on the starter button killed the engine and seemed to have helped as after a quick drive and inspection by the Streetfighter crew all seemed normal.

However, in an effort to minimise the load on a possibly strained engine, Luffy simply cruised around to record the data we needed for the car to complete the event rather than going all-out for a representative lap time.

Streetfighter’s SF700S proves it can build a crazy 10-second supercharged beast if that’s what you want, but this SFP II shows that a bit of restraint can also pay huge dividends.

By applying mild upgrades to an already excellent base vehicle you can enhance its strengths and negate many of its weaknesses, resulting in a car that’s a hell of a lot of fun.

“You can really notice the effort put into the handling of this car at such a tight circuit like Winton.

“Let’s be honest, the Mustang’s no lightweight, so to get this car to handle like it does means a great job.

“It’s got a cracking sound, but the real attribute of this car is its braking and cornering; you can really tip it in and it’s really sharp on the change of direction.

“It’s certainly a surprise packet and one that definitely delivers.” 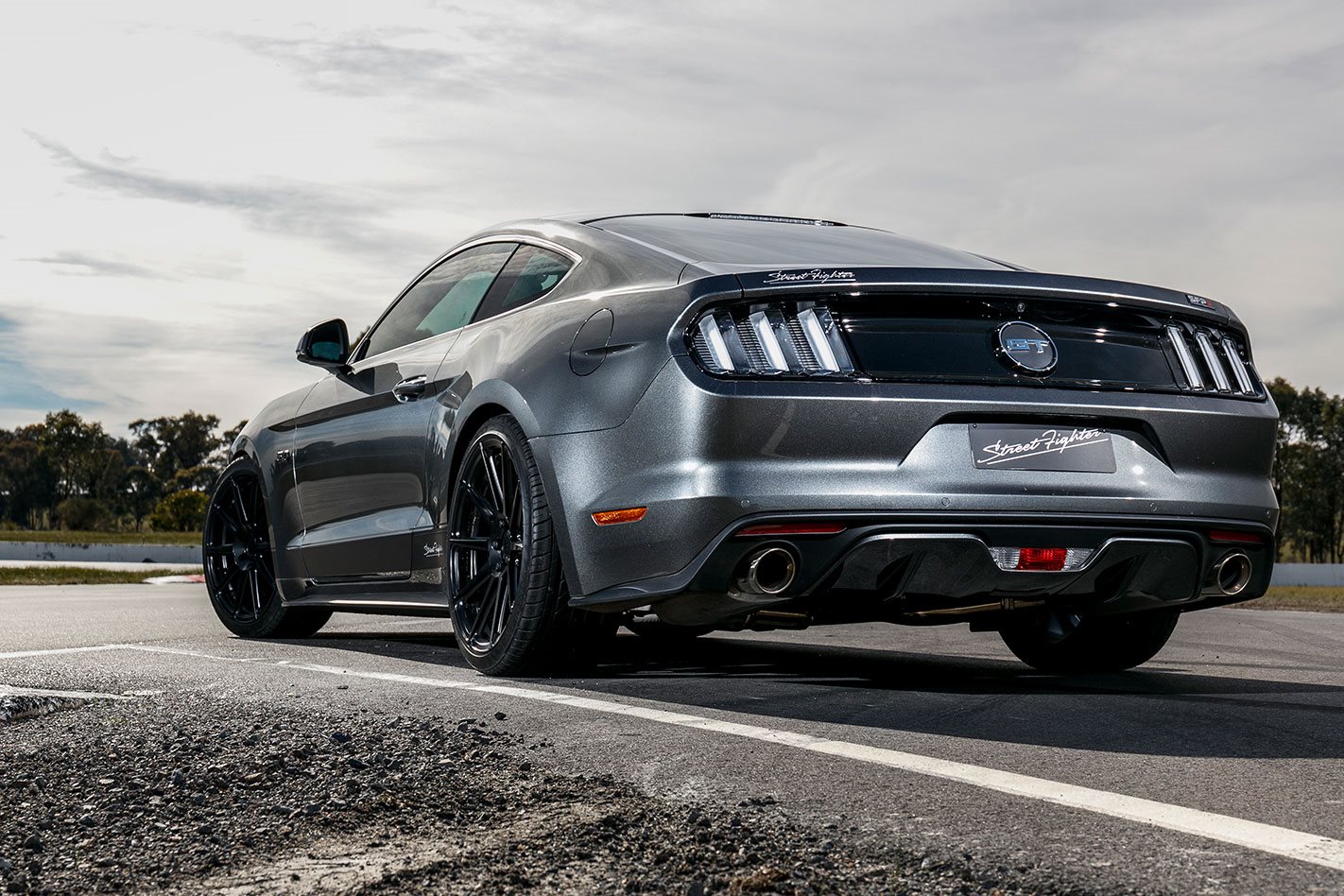 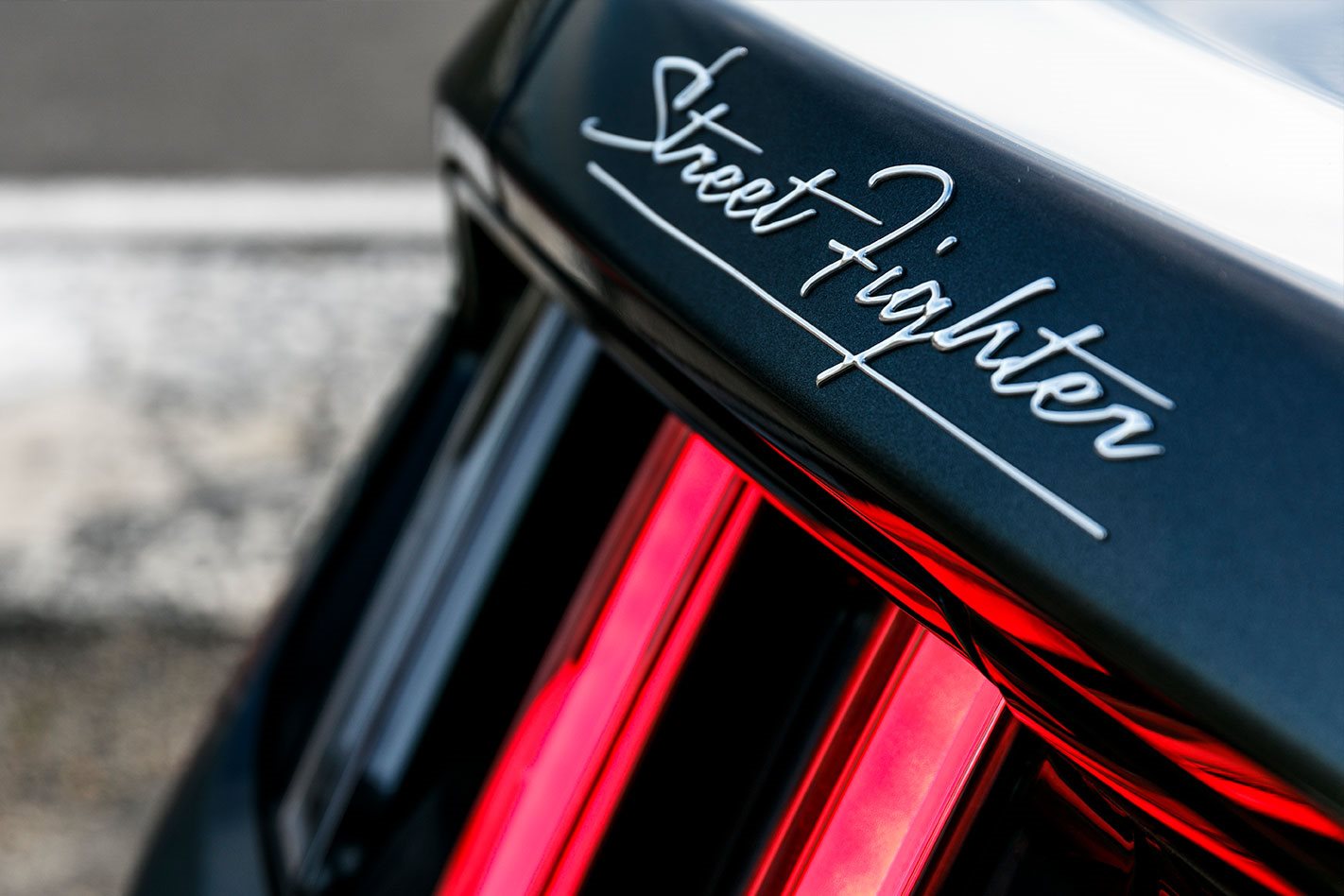