With the car only running a handful of psi, Tunehouse admits there is plenty more to come

Useful gains over the standard model, but with the car running only a handful of psi, Tunehouse boss Jim Ghelis admits there is plenty more to come from this package.

“It’s definitely not a finished product,” he explains. “We need to refine the tune, but our focus so far has been making the hardware fit into the car – we’re not doing this just once; it needs to be made ready for production. We really wanted it here to show what’s coming from us.” 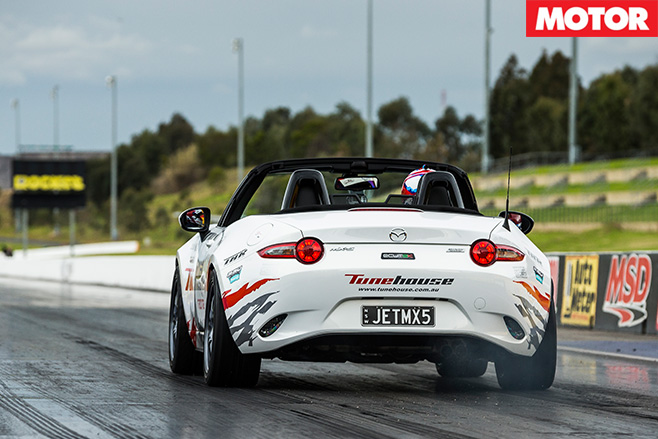 In Tony D’s hands, the Mazda put down a 1:12.4sec lap around SMSP’s South Circuit in thoroughly wet conditions early in the day, but unfortunately with the bonnet up the Mazda was not able to join the other cars and set another lap time once the track had dried out.Though by our reckoning, on the basis of all other cars’ lap times improving by an average of 5.5 per cent wet versus dry, the Tunehouse MX-5 could have done something like a 1:8.4sec lap.

And how much power is the current-spec turbo set-up actually worth? On the day, the MX-5 spat out 122.5kW at the treads though it was the same old story with the fuel. Tunehouse had seen 158rwkW back in the workshop immediately prior to the event. Either way, pretty good given the stock 2.0-litre ND MX-5 makes 118kW at the donk. 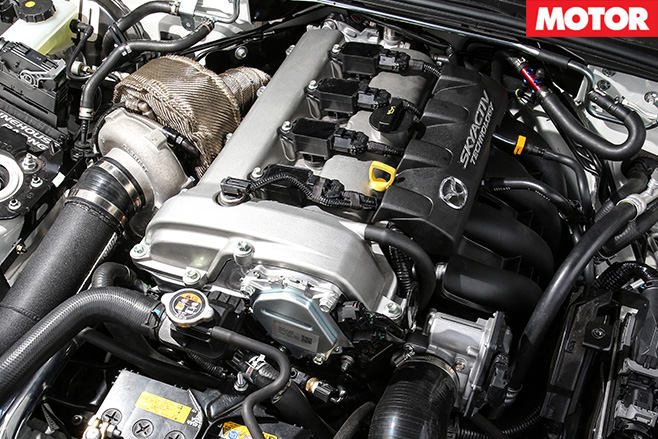 Primed by Tony D’Alberto’s wisdom (see comments panel, opposite page), I must admit I was intending to be very, er, respectful of the turbo Mazda as I strapped on my brain bucket in the afternoon and wandered out onto a mostly wet track.

Firstly – and this is nothing to do with Tunehouse – the MX-5 doesn’t really have space for a person in a helmet with the lid up. For me, the driving position felt a little too legs-forward, low and laid-back, and with a skid lid under the convertible top, I had to snuggle down into the seat and lean back a smidgen more. So, wet track and all, I wasn’t quite plugged into the car the way I like – and I had, like, five minutes to get a holistic impression.

I always play brakes before I play throttle, and these ones have a great confidence-supporting combination of feel and force. It’s a featherweight flyer on wide rubber, so I expected the car to feel over-tyred, with something of a floaty feel on turn-in, but Tunehouse’s enhancements to the Mazda’s suspension obviously work. 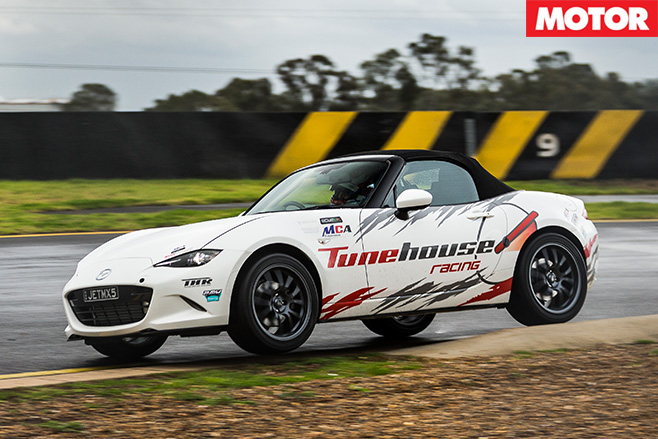 However, as expected, I found the only way for me to stop being chucked away like a crying kid’s teddy was to be gentle with the throttle on the second half of any corner and keep the revs below 4500rpm. That’s where the boost comes in – boom! – with a bellow from the engine bay. Thankfully the stability control (no, I didn’t switch it off) grabbed the car straight even before you realised the power had cocked the car sideways.

Overall, Tunehouse’s Mazda oozed potential, lifting the grip and grunt levels in harmony to prevent the standard car’s balance being destroyed. We certainly look forward to having another crack at it once all the development work is done and dusted. 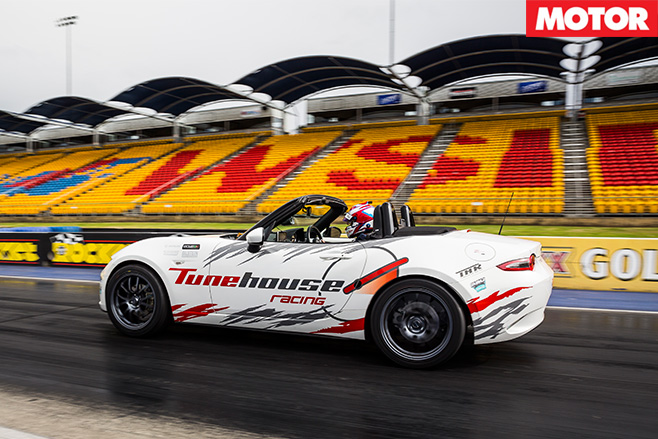 TONY D RECKONS
“Actually felt nicely balanced. I felt comfortable to use the grip of the tyre. The biggest thing I found with this is just the power delivery. When I tried to feed the power on in these sorts of conditions it wasn’t as smooth as what I would’ve liked, which made it a little bit tricky on the exit of corners.”