ND MX-5 with a turbocharger? Go on, we’re listening

The fourth iteration of Mazda’s legendary MX-5 drop-top roadster, the ND, lobbed in 2015.

With the car having grown gradually more porky over the past 25 years, the new-gen model saw the little two-seater become once again lithe and nimble. And, as always, it’s a great platform for enhancement.

Tunehouse has chosen to play with the 2.0-litre ND. As well as satisfying Aussie speed freaks, it has its eye on the US, the MX-5’s biggest market. “The last car we developed was the Toyota 86,” says Tunehouse’s Jim Ghelis, a regular at Hot Tuner. “Of course we thought we’d invest in the new MX-5: it’s far lighter and it’s a new platform with direct injection.”

Tunehouse’s first plan was to refine the chassis and engine in naturally aspirated form. “We found some restrictions in the exhaust and played with the tune,” Ghelis explains. The result was an extra 22kW at the wheels – the standard car shows around 75kW at the tyres – and this is what Tunehouse will market as a Stage 1 upgrade. 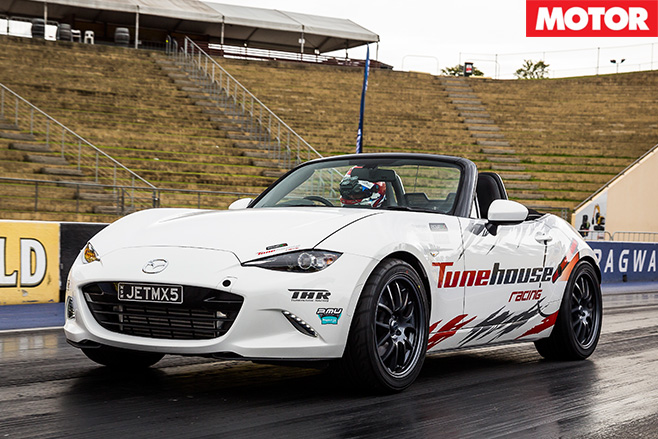 Tunehouse has played with the suspension, too, beginning with a sway-bar upgrade. The bars are from Whiteline and they’re fitted with stiffer drop-links and machined mounts, eliminating any turn-in withering.

“Doing that made a big difference,” Ghelis smiles. “The car’s standard sway-bars allow the body to move around a little more than ideal. That gives a funny feeling when you’re sitting so close to the rear axle line.”

Tunehouse’s next step was fitting MCA coilovers. “What it used to do was squat a lot,” Ghelis says. “This is what we provide to a customer as a Stage 2 set-up after they’ve done the sway-bar upgrade.”

The Mazda’s four-wheel disc brakes have been given the once-over, too, with Project Mu pads against the original discs, and braided lines and higher-spec fluid for a tight ’n’ bright pedal, better bite and reduced fade within the standard wheels and tyres. 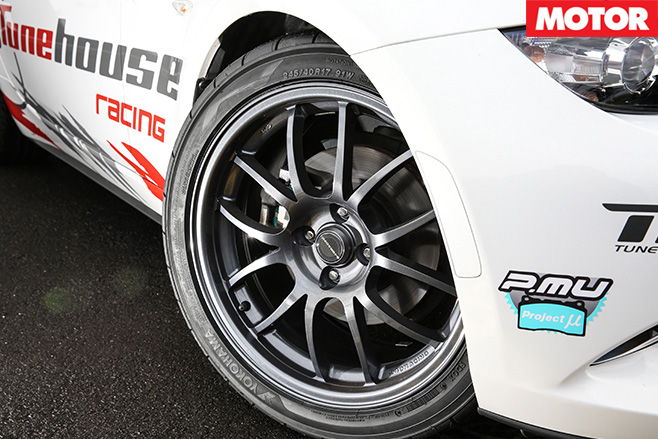 So, let’s get serious. With Tunehouse happy with its naturally aspirated enhancements, the lads got busy with a turbo installation. Even without the first-gen MX-5’s space-invading pop-up headlights, there’s never been much space in an MX-5 engine bay, and with Tunehouse’s intention to sell into the USA, left-hand drive differences have been necessarily considered, too.

Tunehouse has managed to squeeze the turbo, new intake plumbing and intercooler under the Mazda’s skin with only one significant hardware change: relocating the battery directly in front of the engine.

For reasons of price, reliability and ease of fitment, the engine is internally standard, but the GTX 28/67 turbo and intercooler hardware will eventually be used on bigger-budget and bigger-boost modified motors if Tunehouse chooses to go that way.

Surprisingly, this conversion retains the standard exhaust from the cat converter back. Sure, it might be leaving a handful of kilowatts on the table, but it helps keep the cost down at this level of power.

The clutch is also standard. “It hasn’t let us down,” Ghelis says. “It’s the same with the gearbox. It will cope with a lot of extra power, but obviously we keep an eye on things; for instance by looking at the oil.” The result for now is 135kW at the treads. 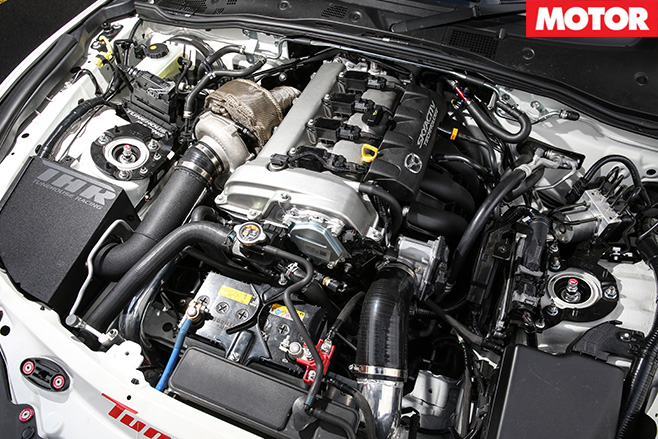