“We’re usually Commodore guys,” VCM Performance’s Steve Tayler remarks as we watch his Mercedes-Benz C63 AMG being wheelspun down the dragstrip. “We’re about factory fitment, factory form and factory feel… but we are car nuts and we do like our power.”

And power is one thing the previous-generation Mercedes-Benz C63 AMG had in spades. Its 6.2-litre V8 is spoken about in hushed tones as one of the best ever, and its 336kW of grunt and tractor-like 600Nm of torque was plenty – enough for most
people. Except…

The guys at VCM Performance in Melbourne are, as Tayler pointed out, more experienced with domestic bent-eight stuff, along with the odd V8 from the Chrysler/Dodge stable. But the potential of the C63 wasn’t lost on them, and supercharging seemed the logical answer – as long as it fit the brief. The company searched the world for a suitable supercharger set-up that wouldn’t need massive surgery to fit, and which could provide a healthy, but not ridiculous, boost of power and torque.

“The last thing an AMG customer wants is to drill a hole in their car,” Tayler observes, adding that the Magnuson set-up requires one small hole in a piece of plastic ducting to fit. “We’ve looked at everything on the market, and the systems are very intrusive.

“There’s a market for all-out power, but what about the guys who want to have just a bit more power, the bragging rights of a supercharger, and have it all reversible?” The VCM crew also works to retain as much of the factory gear as possible because “it actually works”.

“We’re about making it ‘factory’. It’s got factory headers, our airbox is made to suit the factory airbox lid,” Tayler says. “The intercooler just slides in from the top – you don’t have to take the bumper off, which is a good thing if you’ve ever tried to take the bumper bar off this thing. A mechanic who could fit a supercharger on a Commodore could fit this in six or seven hours.” VCM has reset the chassis with a Bilstein damper/H&R spring combo that’s been set up by Melbourne’s Quadrant Suspension, as well as adding uprated brake pads, a Wavetrac rear diff centre (their car missed out on any sort of limited-slipper at the factory) and a custom steel tailshaft.

The main element of the VCM package is the ECU tuning, done via the very sophisticated HP Tuners software suite. Tayler reckons it’s a world first.

“It’s the first one we’ve tuned with HP Tuners software, which means we’ve got access to change a lot more things,” he says. “It’s more of a Toorak tourer – it’s a nice car to drive. The power isn’t on and off – you have to ask for it.”

The C63 has been tuned back a little, according to Tayler, who reckons it should be turning outabout 370rwkW.

“Pushing it, we can break the 400kW mark at the wheels, but I took a couple of degrees [of ignition] out because people would be thrashing it,” he says.
Well, if you insist… 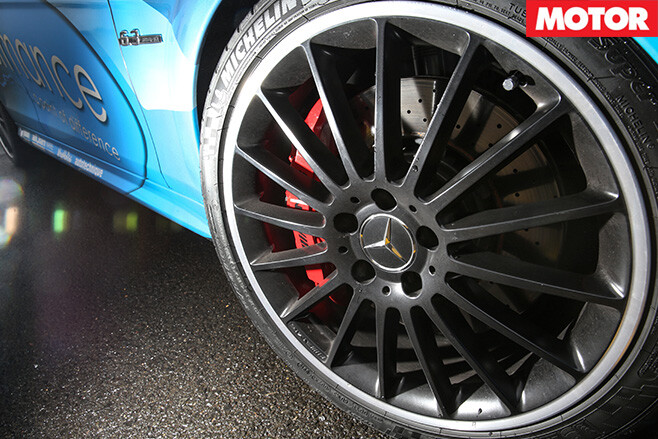