The dirt road we were travelling on had parallelled the ridges of the Richardson Mountains ever since we had climbed out of Eagle River Valley and cruised across the rolling tundra for our latest crossing of the Arctic Circle.

We have crossed the Arctic Circle twice during our world travels; once when heading north through Norway and again a few weeks later as we headed to Russia through Finland. This time we were in the far north of Canada, heading for the remote outpost of Inuvik at the northern end of the Dempster Highway. From the time the first sod was turned in 1959, the Dempster took 20 years to build. Today it is the only road in Canada that crosses the Arctic Circle. In winter it is one of the ice roads made famous by the hit TV show, Ice Road Truckers, but we were there during the height of summer, when the country north of the Arctic Circle is the so-called Land of the Midnight Sun.

Our journey through Canada had begun a few weeks previously when we had crossed the US-Canada border into southern Alberta. The ragged peaks of the Rockies looked close enough to touch from the picture frame of the Patrol’s passenger window.

As spectacular as the Canadian Rockies are in Alberta, we didn’t dally too long, just long enough to wander the Cowboy Trail and visit the Bar U Ranch, one of the country’s most famous ranches, and now run as a historic site by the Canadian National Parks Service. 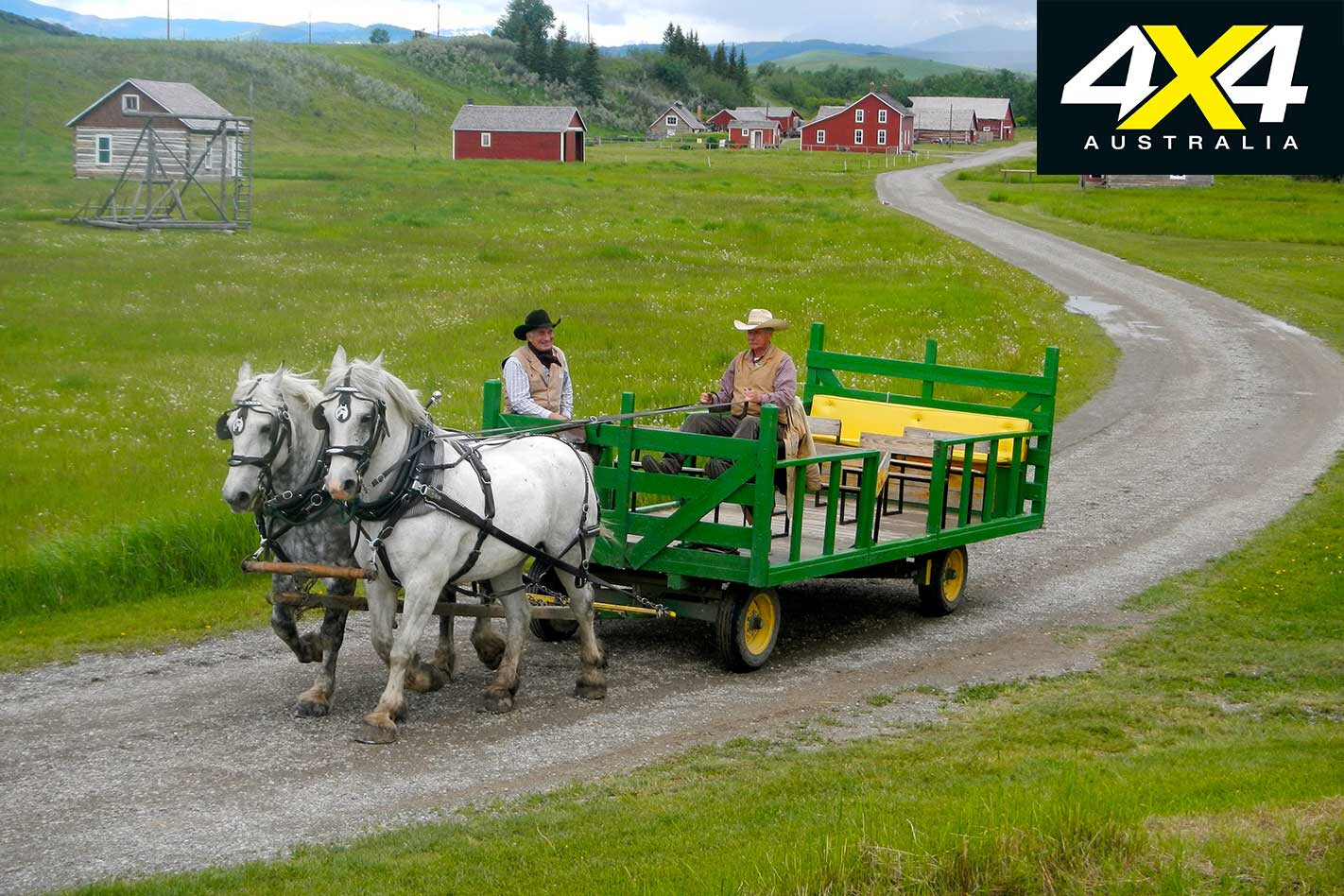 It is claimed that outlaw Sundance Kid (real name: Harry Alonzo Longabaugh; an infamous bank robber in the late 1800s and early 1900s) worked here while trying to dodge the long arm of US law. We seem to keep encountering the Kid’s legacy ever since we were in Bolivia and southern Argentina – he certainly got around!

We also checked out Head-Smashed-In Buffalo Jump (love the name) where, before horses came to the Great Plains, Native Americans, on foot, drove bison to their death over a low cliff. Our route then led us north through the trendy ski towns of Banff and Jasper and we mixed briefly with the rich and not-so-famous at Lake Louise.

High-tailing it onto a dirt road, we escaped the tourist throngs and the RVs that make their way north to Alaska on their annual pilgrimage from the USA and Canada’s deep south. We slipped through northern British Columbia only to find the dirt road we wanted to take was closed due to flood damage.

Forced onto the Alaska Highway – a road that was pushed through the Canadian wilderness in the dark days of World War II to give Alaska a land link with the lower 48 states – we continued north with all the other pilgrims. It’s a route that retains its adventurous and challenging reputation even though the road has long been tarred and dotted with small towns, servos and campgrounds. 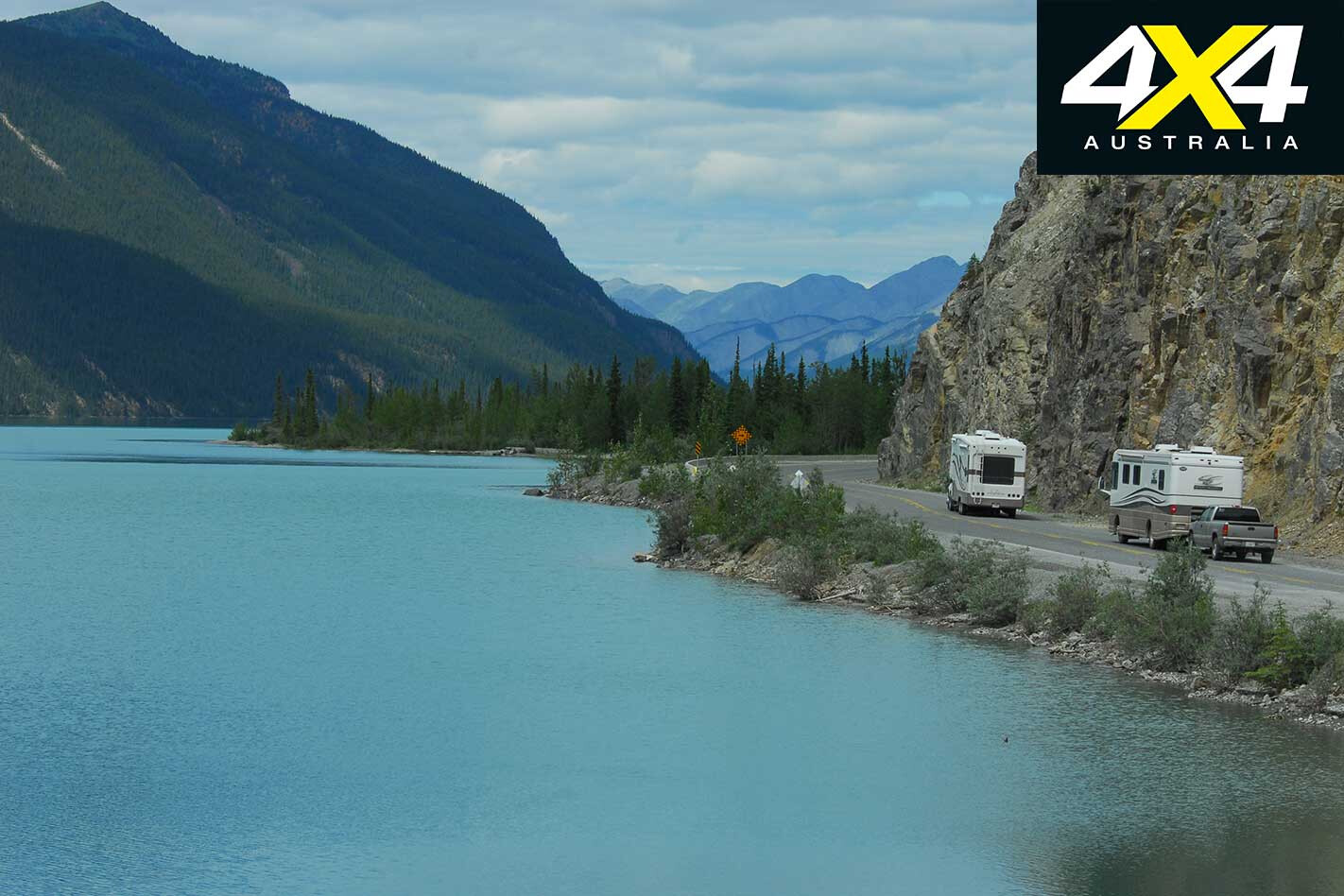 Near the small community of Watson Lake we crossed into the Yukon and immediately found a dirt road to our liking. This route first follows the Frances River, then the Finlayson and Pelly rivers, before meeting the mighty Yukon River.

Isolated hamlets, with their inhabitants busy mining for gold or trapping for furs (or both, depending on the season), dot this wild region of Canada. Immediately, we decided to ease up on the accelerator, and chose to dawdle our way deeper into these wild lands.

Not wanting to break the spell too quickly, we headed for the old mining towns of Mayo and Keno City. The latter is a rustic town perched on the edge of Keno Hill, which even today continues to yield its wealth of silver to big miners, and nuggets of gold to small dredge operators. At Dawson City we had a chance to step back in time. This town, on the banks of the Yukon River, was the epicentre of the late 1890s Klondike gold rush and it still hangs onto its Wild West charm and character. Only a couple of the streets here are paved – the rest are dirt with wooden sidewalks – and many of the buildings date back to when this was once the world’s richest gold-mining town.

The nearby river valleys have been turned over so much in the past hundred years that they resemble huge gravel pits, the earth washed away and sieved for increasingly finer particles of gold. While hydraulic sluicing of the hillsides has been banned in the Yukon, small dredge operators still work the flowing waters of the ice-fed streams. From Dawson City we joined the Dempster Highway, which for much of the way follows an old dog-sled trail and is named after Royal Canadian Mounted Police inspector, William J Dempster.

As a young constable, Dempster frequently ran the dog-sled trail from Dawson City to Fort McPherson in the Northwest Territories. He later gained more fame when he and two other constables were sent out in March 1911 to rescue another police patrol unit [A Royal Northwest Mounted Police patrol of four men, led by Francis Joseph Fitzgerald, that became known as ‘The Lost Patrol’] that was long overdue to arrive in Dawson City.

Sadly, they only found the frozen bodies of the unit members, which were recovered and are now buried at the First Nation community of Fort McPherson. It’s about 770km from Dawson City, north across the Arctic wilderness to the First Nation settlement of Inuvik.

Once again we said goodbye to most of the RVs as we slipped onto the well maintained dirt highway. At first, the road followed the North Klondike River and then climbed into the spectacular Tombstone Range as we passed through the fine mountain vistas and magnificent wild country of Tombstone Territorial Park. 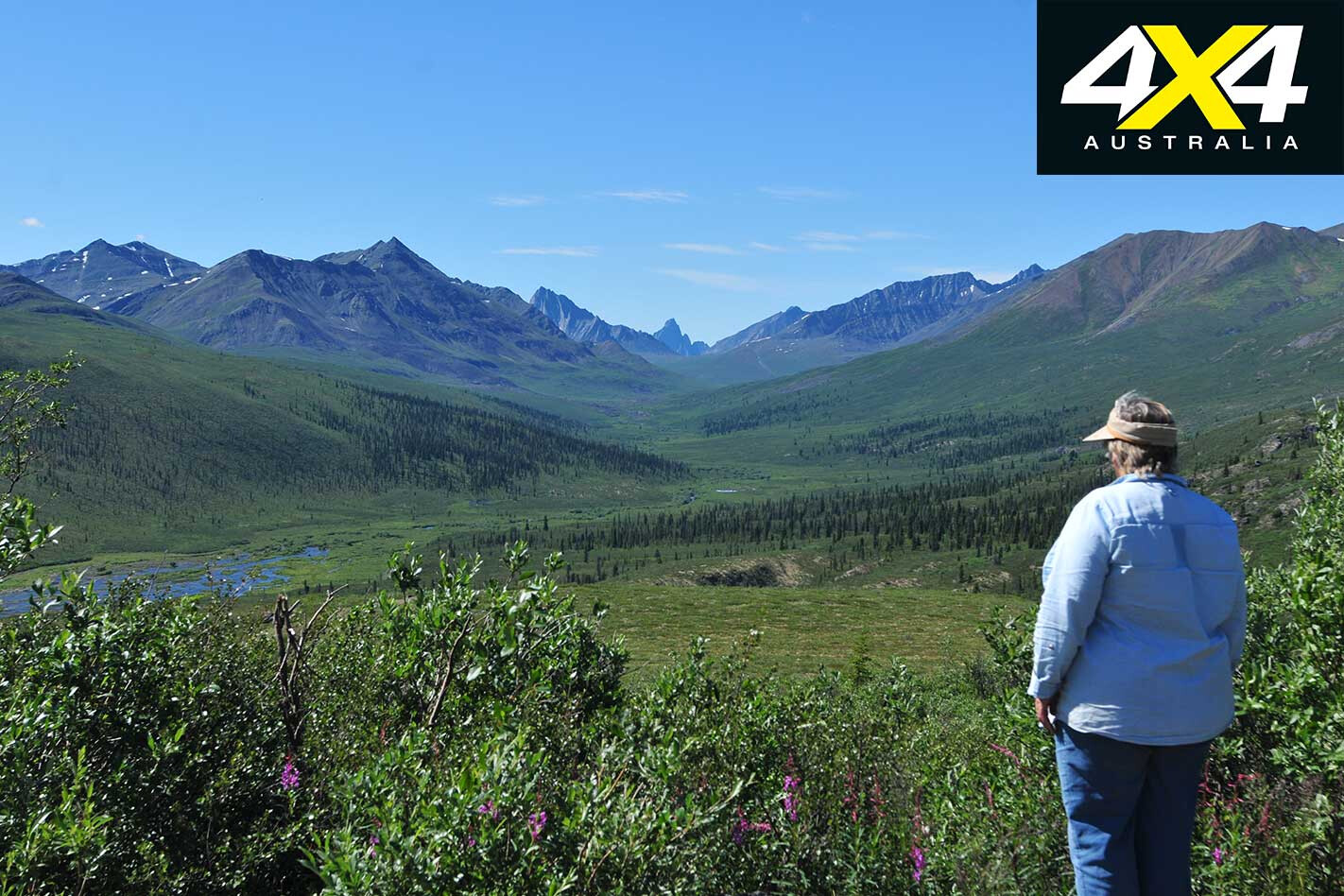 Around the halfway mark we reached the small settlement of Eagle Plains, and then a short time later, the Arctic Circle Monument. Further north, among the peaks of the Richardson Mountains, we reached the border of the Northwest Territories.

This sparsely populated region of far-north Canada encompasses an area the combined physical size of South Australia and Victoria, but with a population of just 44,000.

Across this rolling tundra, bare of trees, the Porcupine caribou herd – containing more than 150,000 animals – wander on their annual migration, first heading north to the coast in early spring and again in autumn as they head south back to their winter feeding grounds. We missed a small mob of between 5000 and 6000 animals by a couple of hours (or so we were told by locals and travellers), the plains appearing devoid of all life as we drove north. In summer, though, the plains are ablaze with colour, especially with the purple and mauve of fireweed, which in places carpets the ground in an unbroken display.

Still, in autumn the tundra puts on one of its most dazzling mantles as the low scrub and bushes transform from vivid green to a range of yellow, brown, gold and red hues and then to the sombre colours of winter. 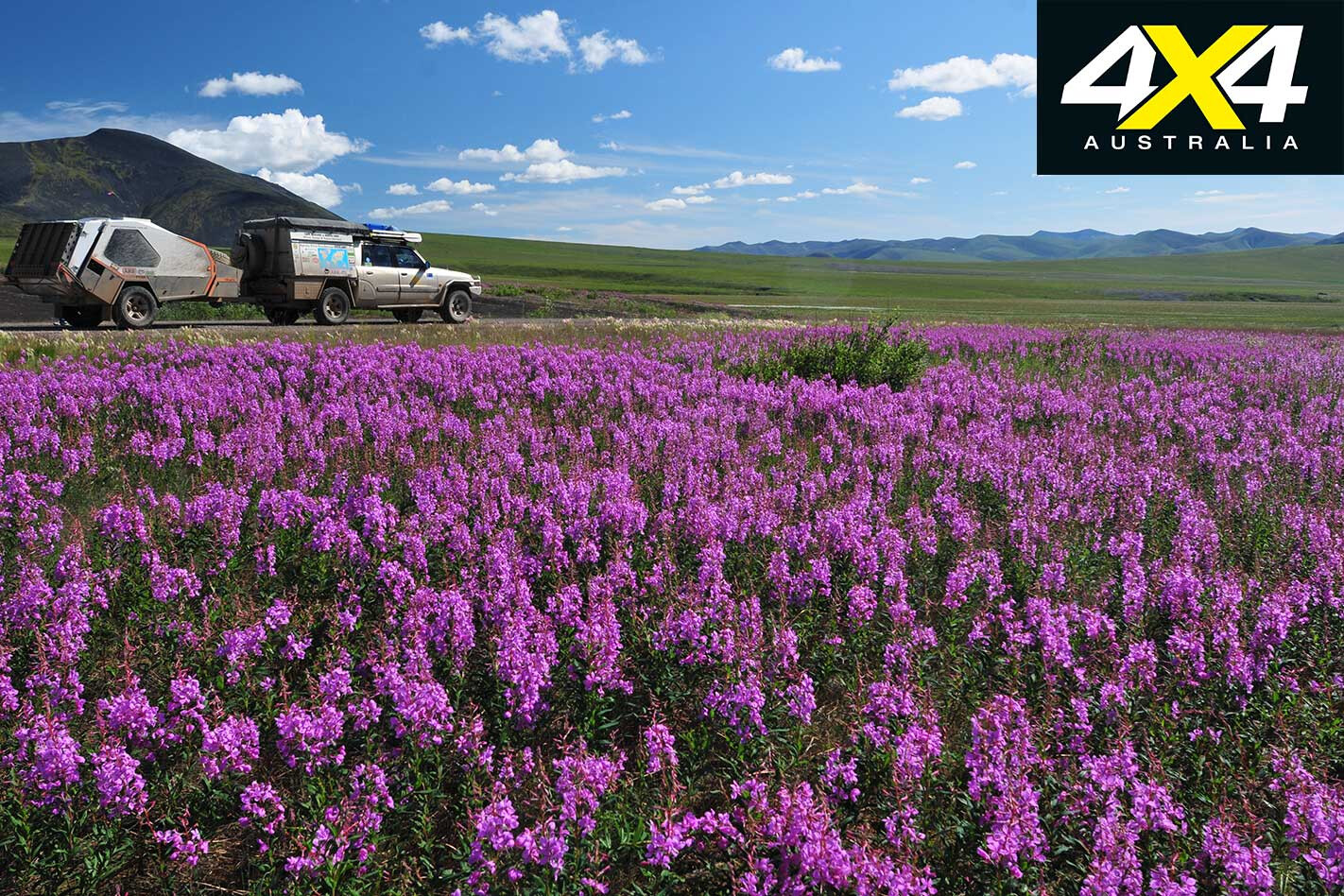 At the Peel River – and much larger Mackenzie – ferries shuttle vehicles across the water during summer, while an ice bridge in winter keeps traffic moving. Only when the rivers freeze and break up is traffic flow interrupted. We were lucky. Unseasonably, a flood of water came down the Peel and washed the ferry away, closing the crossing for a week just after we had returned south.

On the banks of the Peel is the small historic settlement of Fort McPherson; its cemetery contains the graves of that unfortunate RNMP patrol of 1911. On the Mackenzie’s banks, at the confluence of the smaller Arctic Red River, is the native settlement of Tsiigehtchic. Here, we met a fellow Aussie. Hailing from Brisbane, the ex-pat has lived in the village for the last few years working as an electrician on the mining sites around the area. Married to a local, we asked if he would ever return to Queensland. His reply? “Probably not, too many people, and the only thing I dislike about this place is the month or so of absolutely no sunlight.”

A few hours later we drove into Inuvik and the end of the summer road. In winter, an ice road heads north across the Mackenzie delta and along the shores of the Arctic Ocean to Tuktoyaktuk. After a day in this small town we were to retrace our steps south and head for Alaska, but that ice road heading north looked tempting – maybe tempting enough to draw us back in winter.

Travelling in Canada is easy and rewarding with plenty to see and do. Crossing the border from the USA is a cinch and by far the easiest border we have crossed in our global travels. You can hire or buy an RV at Canadream; www.canadream.com. There are several other RV hire companies.

For info on the Canada’s three western provinces check out: http://travelyukon.com; http://travelalberta.com; www.hellobc.com. For Parks Canada visit www.pc.gc.ca/eng/index.aspx. For info on parks, camping and fishing in the Yukon check out: www.env.gov.yk.ca/