It’s not quite a highway, but Anne Beadell’s namesake off-road track offers the desert experience of a lifetime

Just before Christmas 2011, our local 4X4 club (the Riverland 4WD Club) had [the late] Anne Beadell as guest speaker – this was the final spurt of enthusiasm we needed, as only a few months earlier we’d been discussing around the campfire where to hold next year’s big trip.

This article was originally published in 4x4 Australia’s April 2012 issue.

Having driven the Gibb River Road, Tanami and Simpson deserts on numerous occasions, the Great Victoria Desert was mentioned and this materialised into a plan for an Anne Beadell Highway crossing. 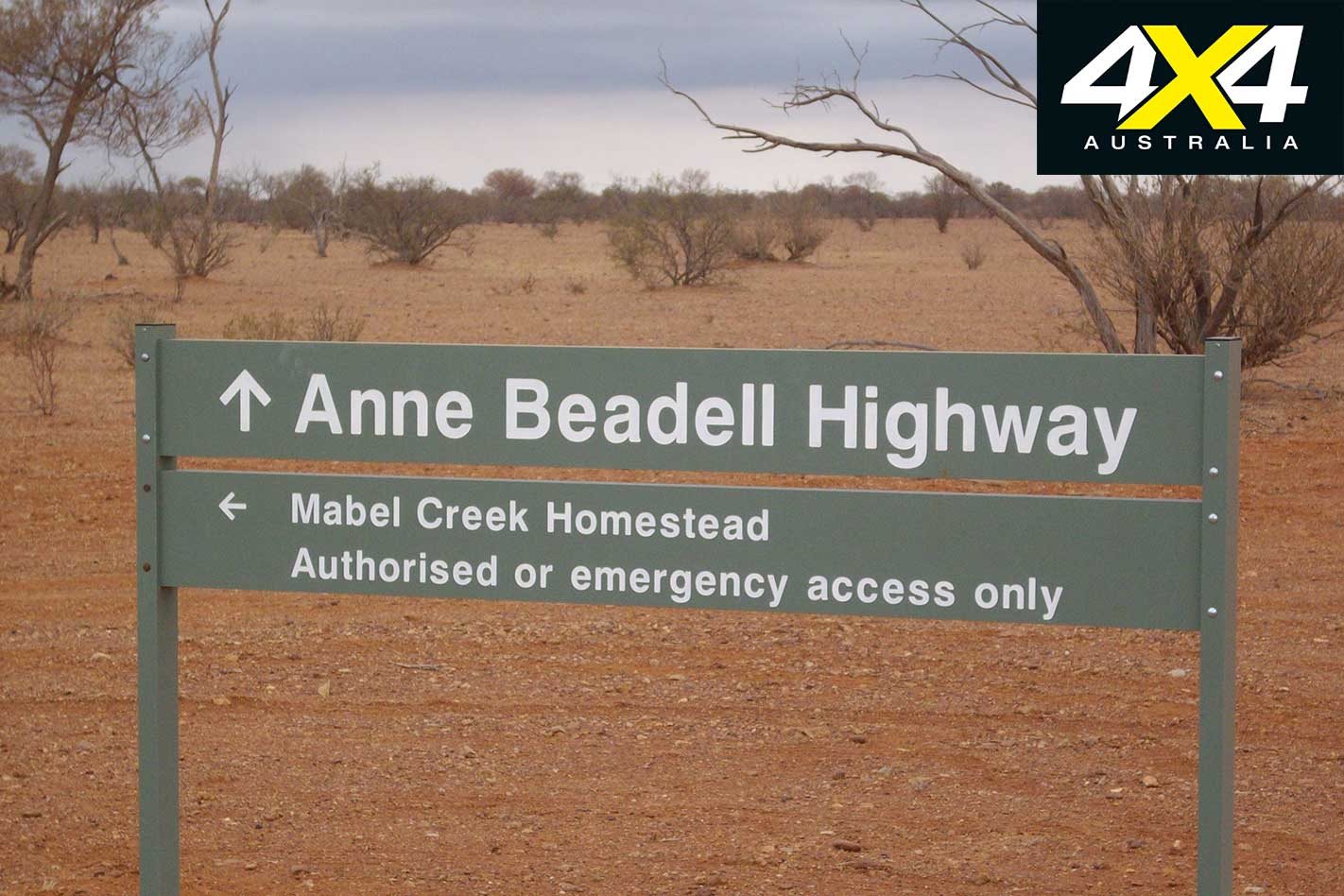 Several permits are required to pass through aboriginal and government-restricted areas, and this is one of the longer trips away from any major supplies. We had been also told to expect a narrow track in places and lots (and lots) of corrugations.

My decision to take a Jayco into such a rough, isolated area was questioned. My response was, and is, if Len [Beadell] could do it in an old Land Rover, then surely I could manage with modern equipment.

I had done a lot of work on the Jayco, replacing screws with bolts and Nylocks, and just checking and fixing what I considered weak points. Having done a lot of 4X4 travel with a soft-floor flop-over camper, I was confident that with everything set up and checked and driving to the conditions, we would be fine. 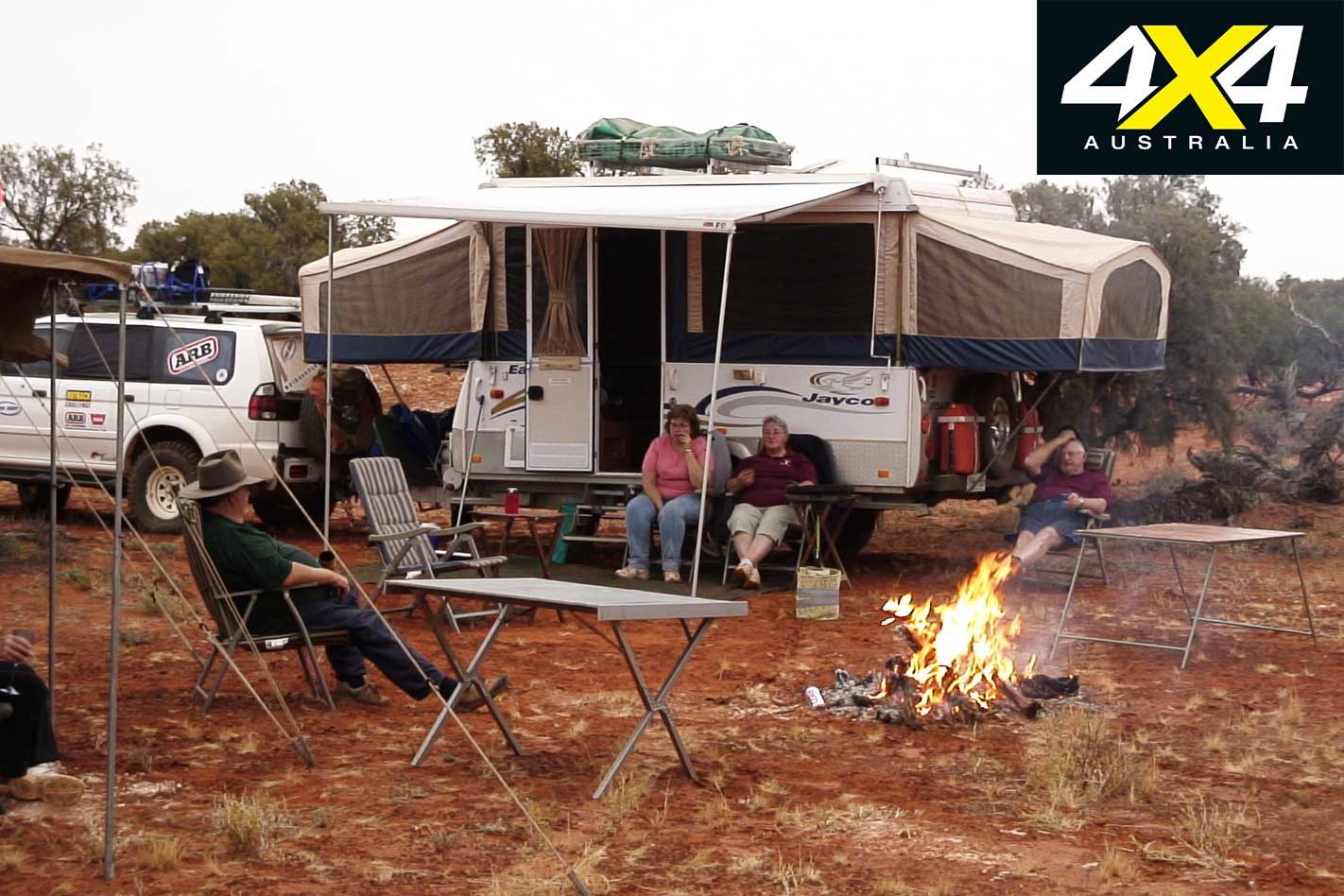 In early June we set off along the blacktop towards Coober Pedy. The Anne Beadell crossing was only a small part of a seven-week trip through the Pilbara and to the WA coastline and then back across the Nullarbor.

We camped 40km below Coober Pedy, finding a spot set back from the road for our group, which consisted of Barry and Rae in an 80 Series with a new Cub Spacevan in tow; Pete and Pat in a 3.0-litre Nissan Patrol with an Adventure Camper; and Sadie and me with our Mitsubishi Challenger towing a Jayco Eagle Outback. Ages ranged from 50 through to Barry at 70 years young.

Thunderstorms surrounded Coober Pedy the following day and after refuelling and topping up supplies, we looked west to find the only porthole in the weather exactly where we intended on heading. 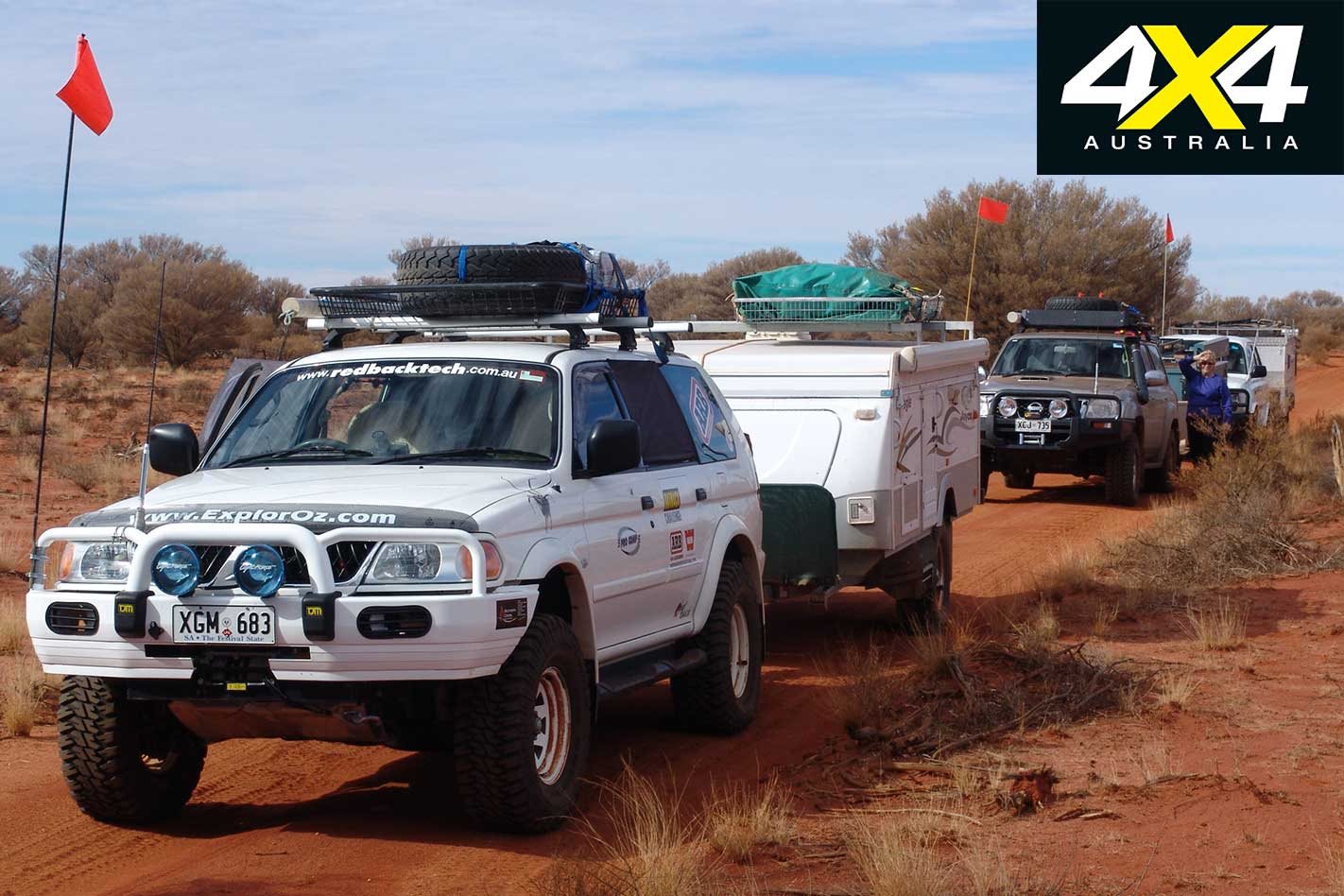 Approaching 2pm, and after a quick call to the Bureau of Meteorology, we headed towards Mabel Creek. Though dusty, this road was in very good condition and we had quite a large area of opal mining to pass through, but we made good time. Camp was struck among thick scrub beneath a brooding sky.

Next morning, after packing up, it wasn’t long before we found some aggressive corrugations. Speeds were reduced and tyre pressures dropped to help the suspension. With camper trailers in tow, progress was slow. Nobody minded, as this allowed more time to enjoy the countryside and the light-hearted UHF chatter between the three vehicles. 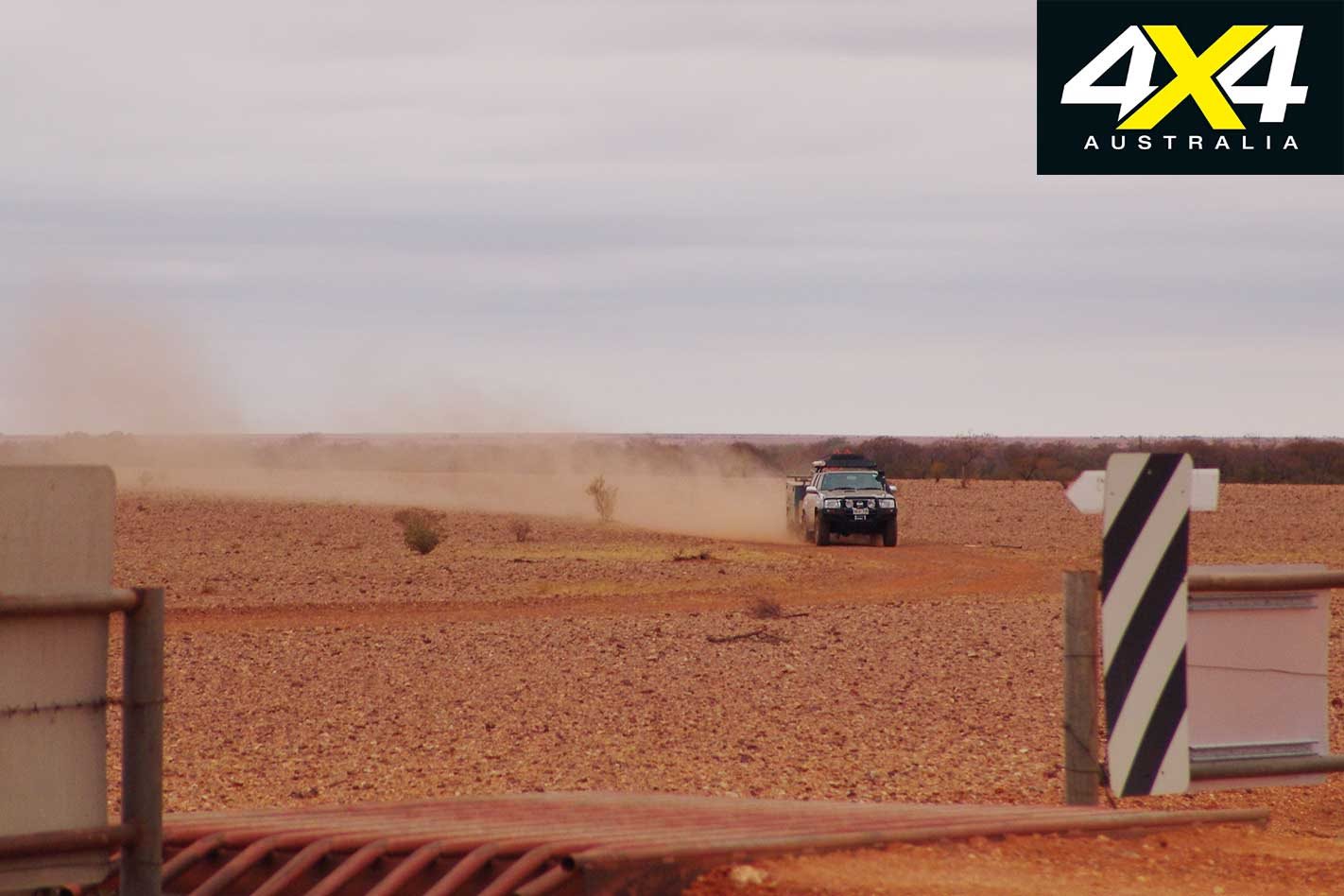 Just after lunch and about 200km from Coober Pedy the tone changed when it was discovered a U-bolt had fallen off one of the camper axles. We set up camp and then thought about the best way to attack the problem. Pete decided to head back and buy a replacement in Coober Pedy. He and Pat returned 24 hours later and the parts were fitted. That night we enjoyed a roast dinner with considerably lifted spirits ahead of the next morning’s departure.

After about 40km we reached the turn-off to Emu Field, where the British Government carried out its first mainland atomic bomb tests. Totem 1 and 2 were detonations carried out at Emu Field on October 15 and 27, 1953. It was an eerie feeling to look around and see the lack of vegetation for at least 200m, which slowly built as it radiated from the site. Onward from here it’s 16km to Emu Air Strip – one can now only imagine the planes landing here, loaded with equipment. 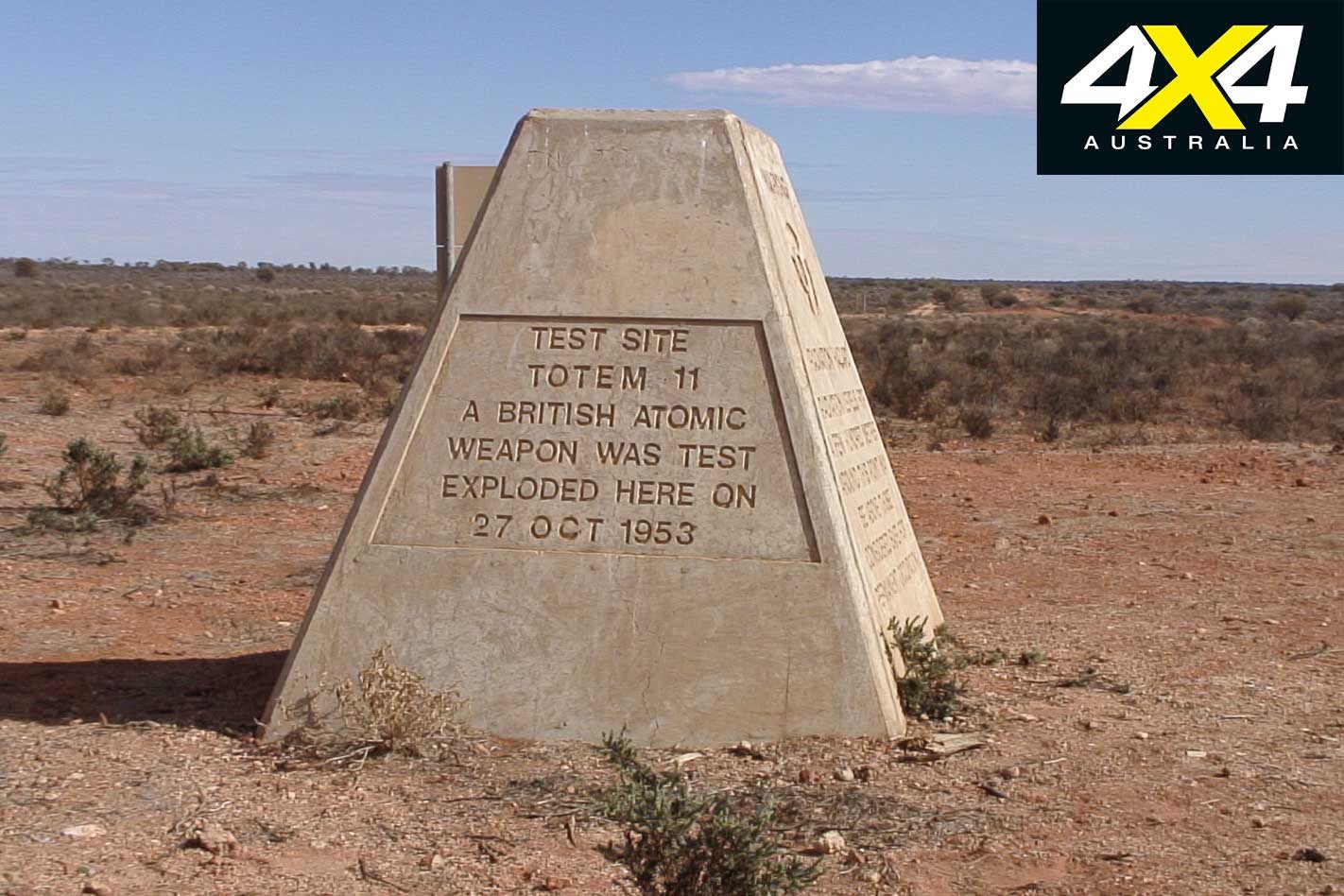 After a good look around, we pushed on to eventually strike camp 30km further west. I had looked for campsites using Google Earth before leaving home – all were great with ample room for three vehicles and campers. This is a great way of finding camp spots anywhere before heading out.

We awoke to some drizzle and everything was damp, so we took time packing up to allow for things to dry. I did my usual vehicle check. As I examined the camper connection, it all moved – including the towbar!

Thinking it was just mounting bolts being shaken loose, I climbed under with sockets and spanners only to discover it was actually cracked in three places. Nothing to do but remove it and fix it with a bush battery weld. We had tried using two batteries, but found three better. While doing this, we also put some steel rods to help strengthen it. It was replaced and we finally got underway. 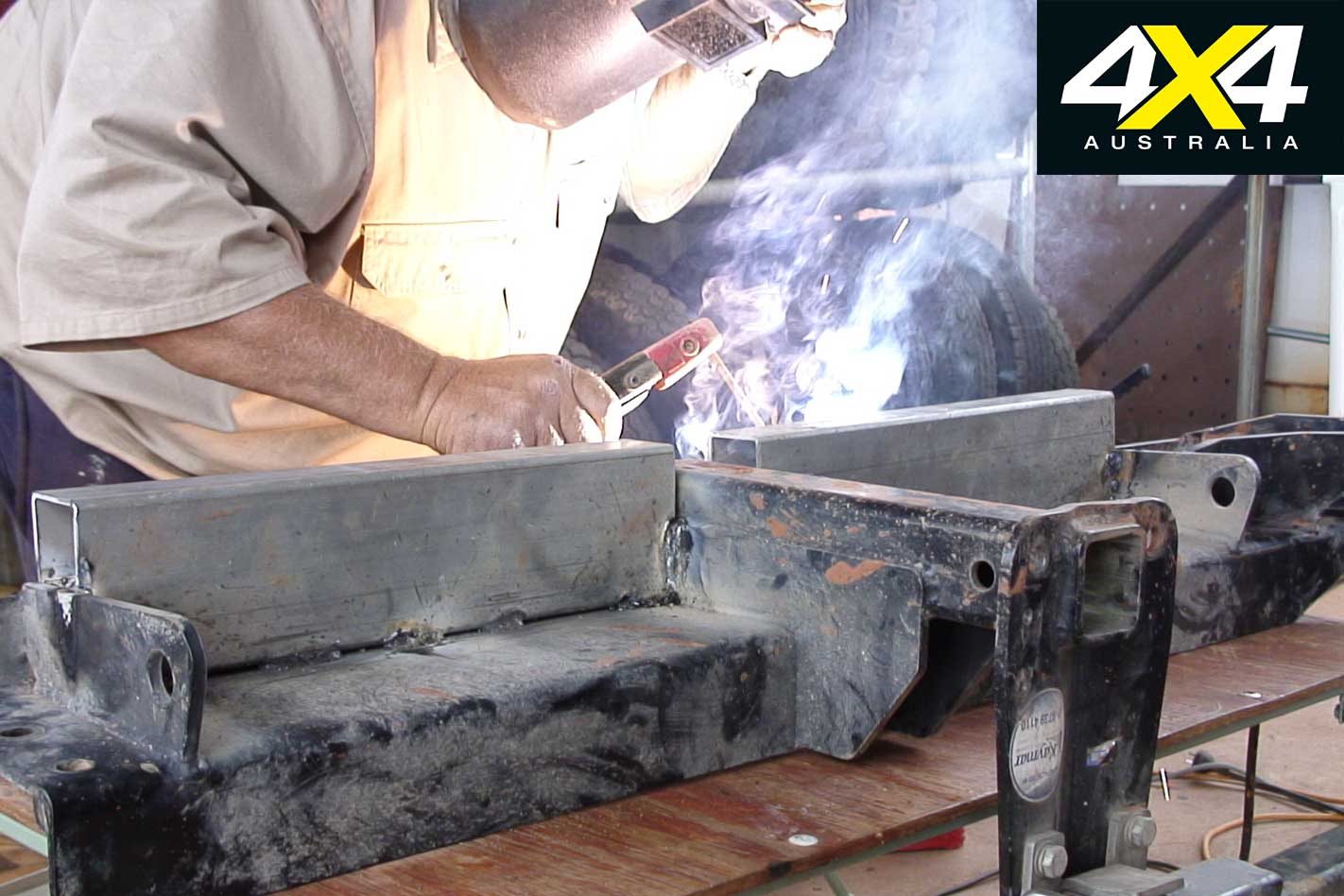 Later that day we reached Annie’s Corner. Most of the tracks and corners were named by Len Beadell using family names, with this corner and the track itself named for his wife Anne (he must have had a smile on his face when he called it a highway, though). Travelling on with corrugations getting worse and checking welds every 30 minutes, we only covered 65km on this day.

The following day we noticed how the countryside was changing, with much more spinifex and mulga, with other grasses and grevillea. We were surprised to learn that there are currently 65 species of spinifex that have been documented. 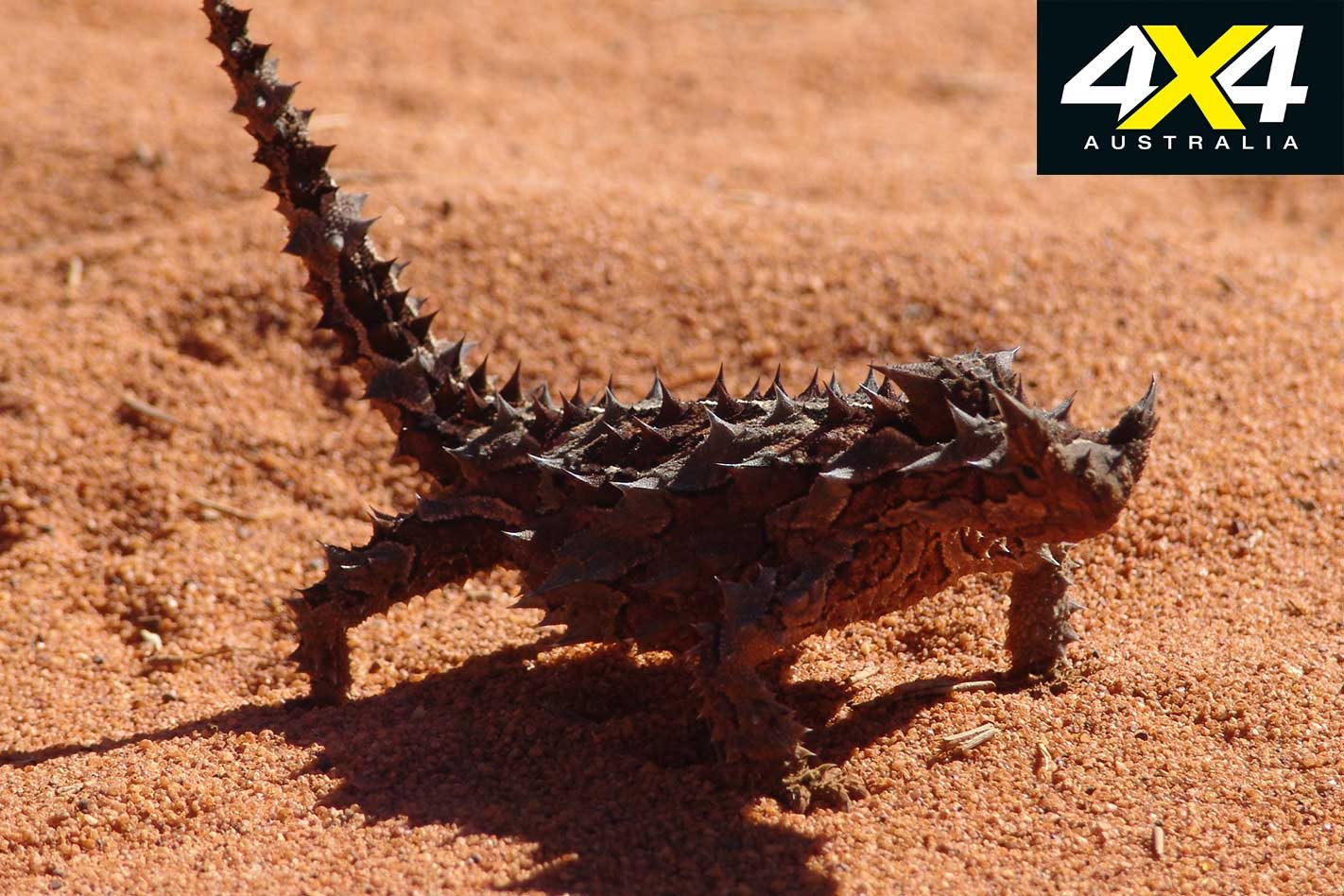 By now we had settled into a similar driving style each day. A lot of the track now was becoming closed in and with the extra width of the Jayco scraping its way past all the growth, we copped a broken exterior light.

We checked out Vokes Hill Corner and the Len Beadell sign there. By the time we stopped for camp we were just over 110km from Ilkurlka, and 700km from Coober Pedy. When setting up camp we heard another group coming along heading the same way. They stopped and told us of their dramas with parking and indicator lights falling out of vehicles. They also had a tandem trailer that had lost its U-bolts from one side and had the axle chained to the spring. 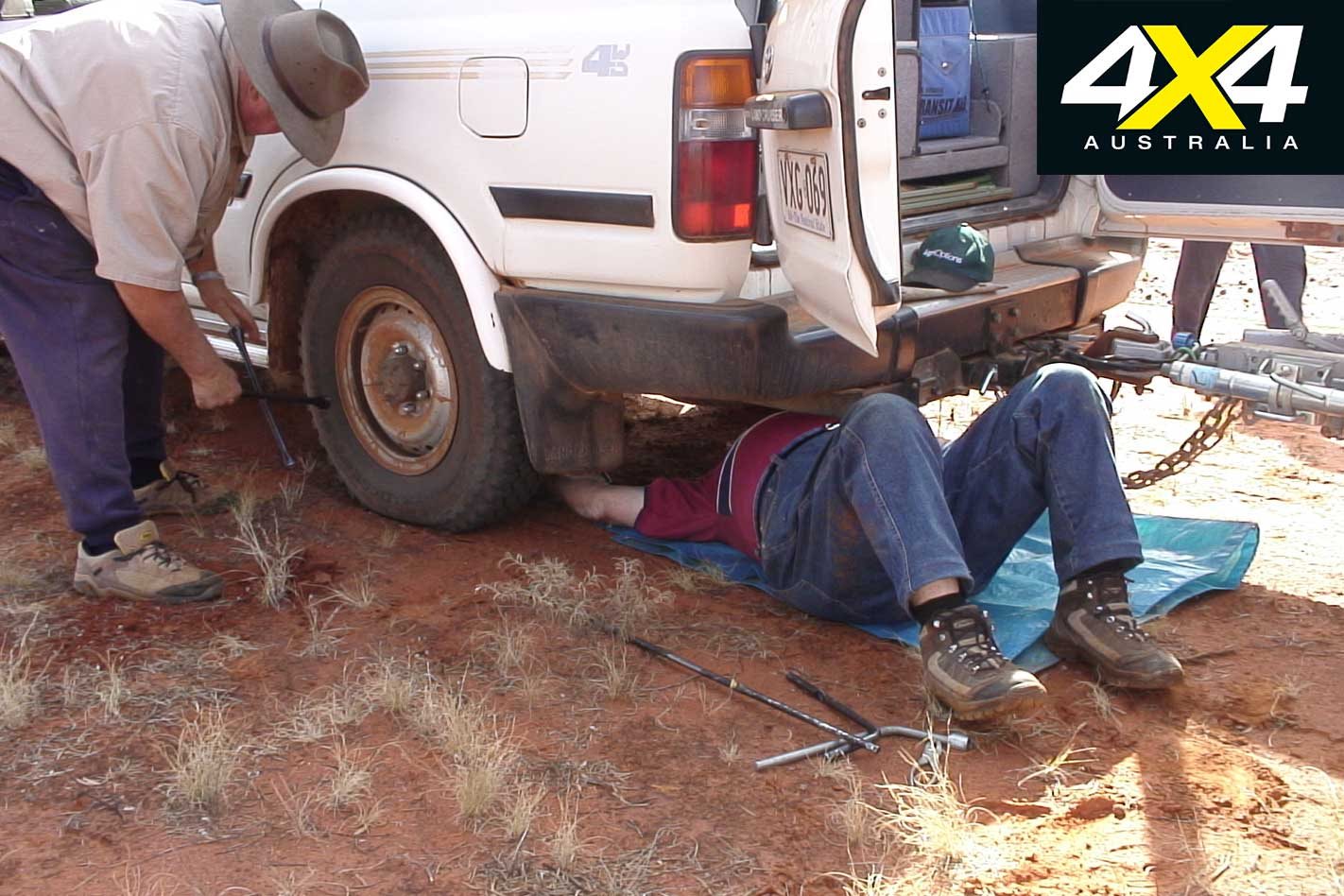 While examining my tow hitch I found it was cracking again slightly. We decided to leave it and see if we could do a better repair at Ilkurlka, only a day away. In this first 700km and seven days we had only seen four other vehicles – the only other track that is more isolated than this is the Canning Stock Route, although it arguably sees more traffic.

Day eight and a small drama surfaced with the 80 Series: Barry could hear a grinding noise from the rear of his vehicle. We started by pulling the wheel off the side he believed the noise was coming from. More and more it sounded like a wheel bearing, but once we tried to remove the brake rotor and found it would not budge, we started thinking it may be the handbrake shoes. 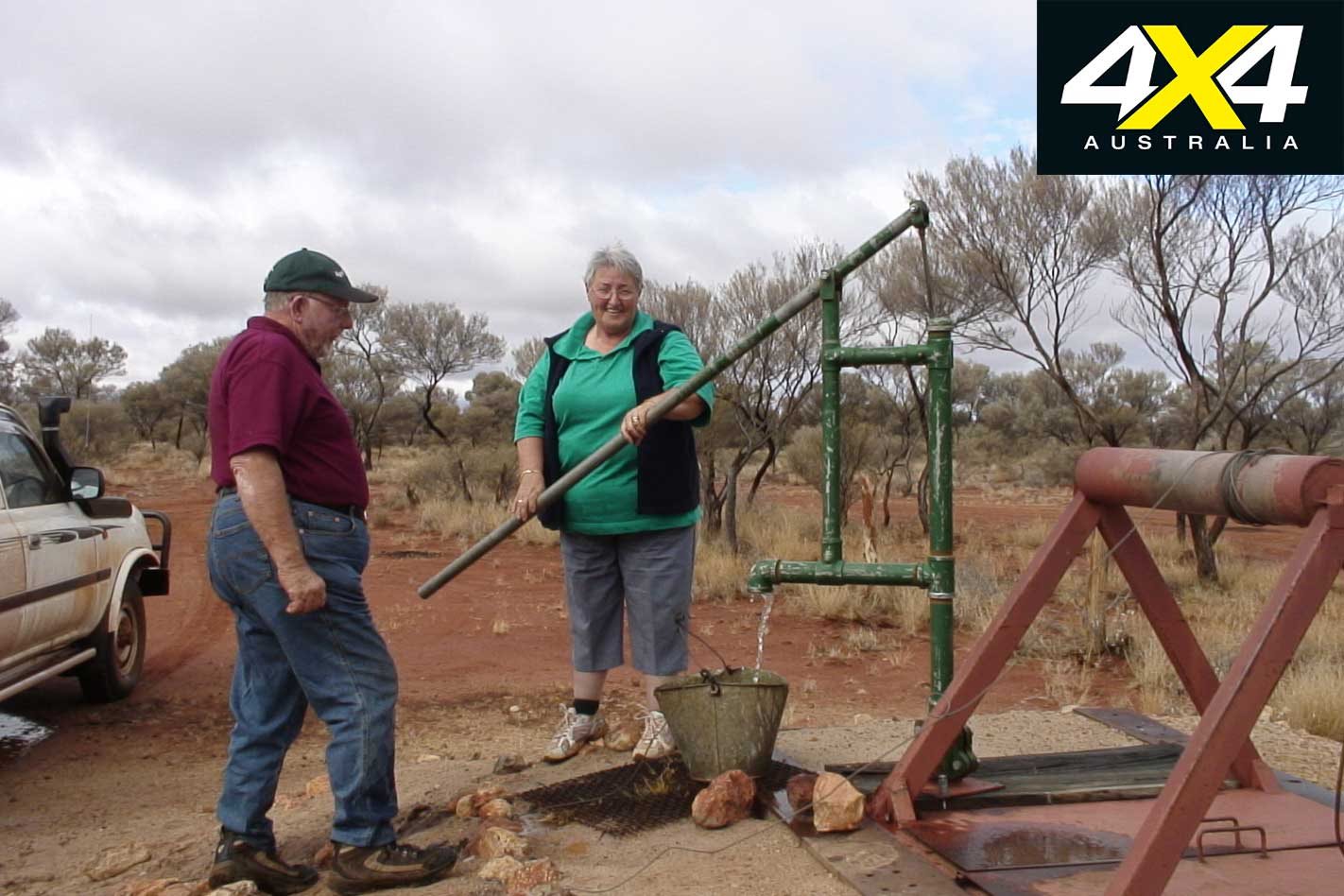 Sure enough, when we finally removed the rotor, the shoes had delaminated and were spinning around inside, jamming the rotor. We removed the shoes and taped the hand brake handle down so Barry wouldn’t apply it by accident.

Next we were headed for Ilkurlka. This piece of track had more sand hills and was the site of our first camel spotting. We saw three groups and one single male that decided he wanted to be trip leader for about six kilometres – no matter what we did and how much we varied our speed he stayed on the track, plodding along at about 30km/h. We were about to give him a sand flag so he could become our official new trip leader, but he decided to head bush. 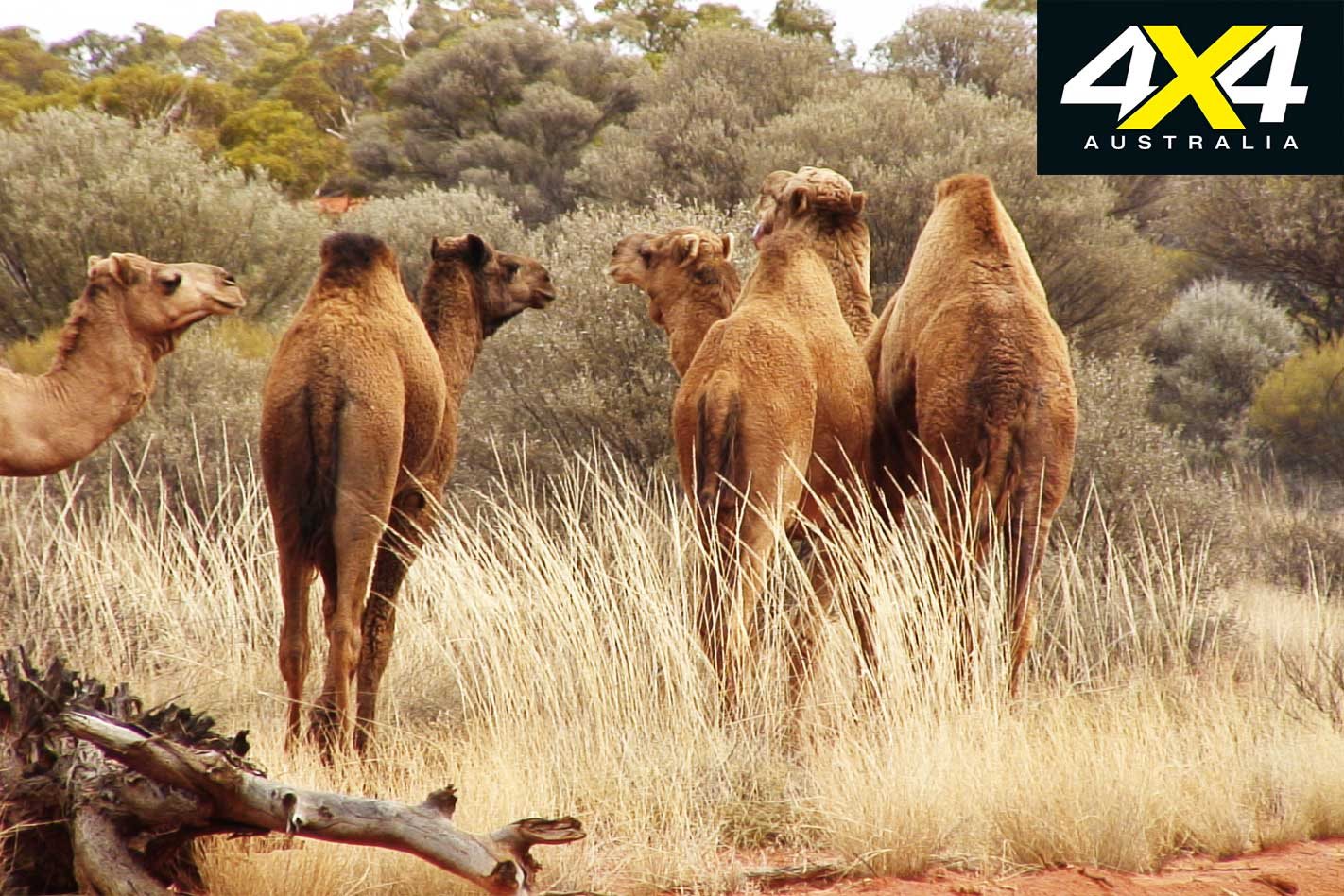 Shortly after this entertaining interlude, we reached Ilkurlka and refuelled. We also made use of the great camping area and hot showers there. Welding repairs were done using an inverter welder and some 70 x 50mm RHS on both my errant towbar and an LPG bottle holder on one of the other campers.

In the morning and after final repairs, we travelled the 57km to the light plane crash site. A Goldfield Air Services plane had crash landed in January 1993 en route from Warburton to Kalgoorlie. The track is the same one in and out, cresting numerous sand dunes. 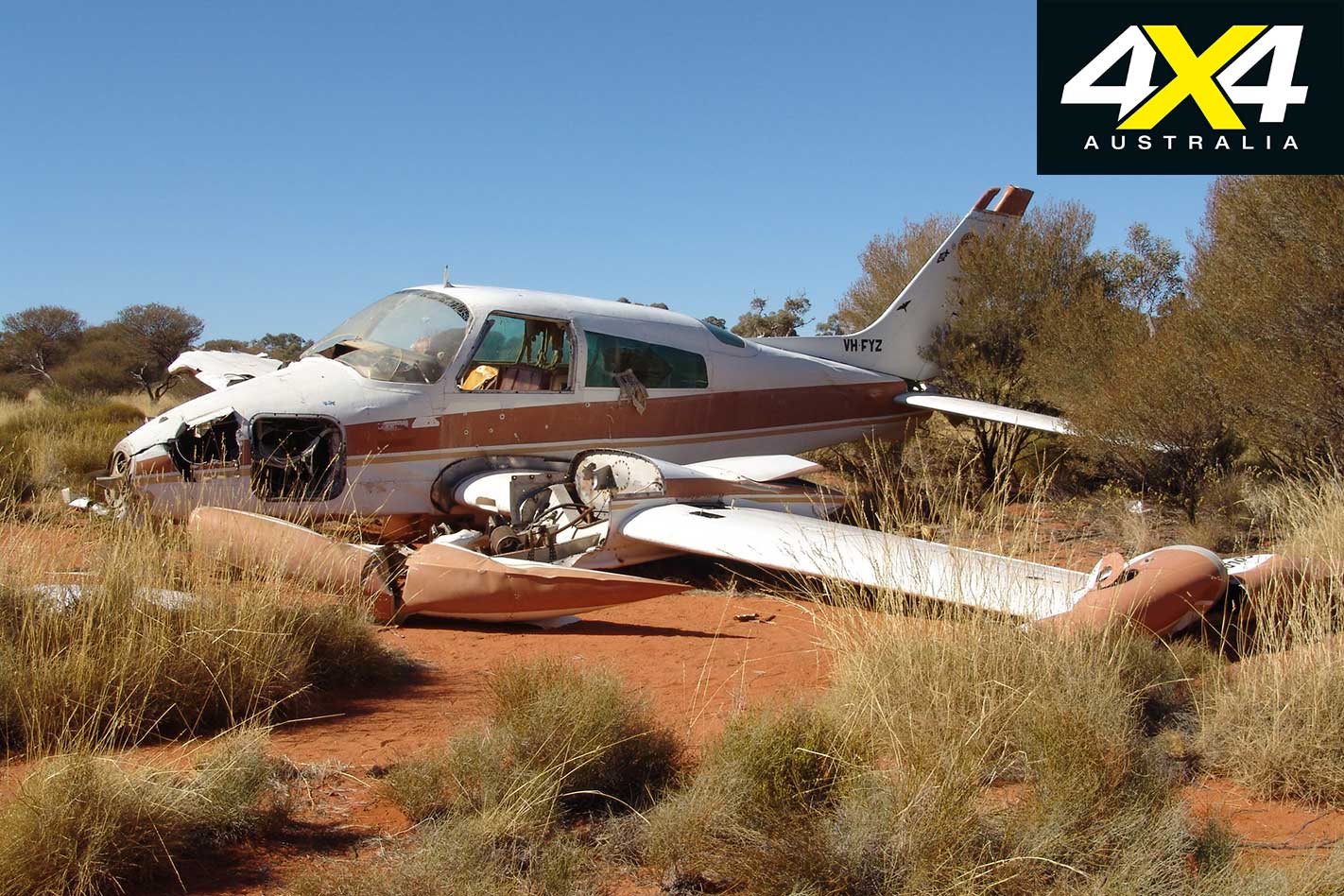 Discussion was made about how lucky they were the pilot came parallel to the sand dunes, putting it down so well in a very deserted area. After a photo session we headed off towards Neale Junction. Along this stretch we noticed all the burnt areas from the previous fires, but regrowth was looking good, with recent showers helping the recovery. Large groups of camels grazed the grasses that had sprouted.

Camp was made about 5km short of the junction as we expected it to be a dust bowl at the camp area itself, as it’s used by travellers of both the Anne Beadell and Connie Sue highways. 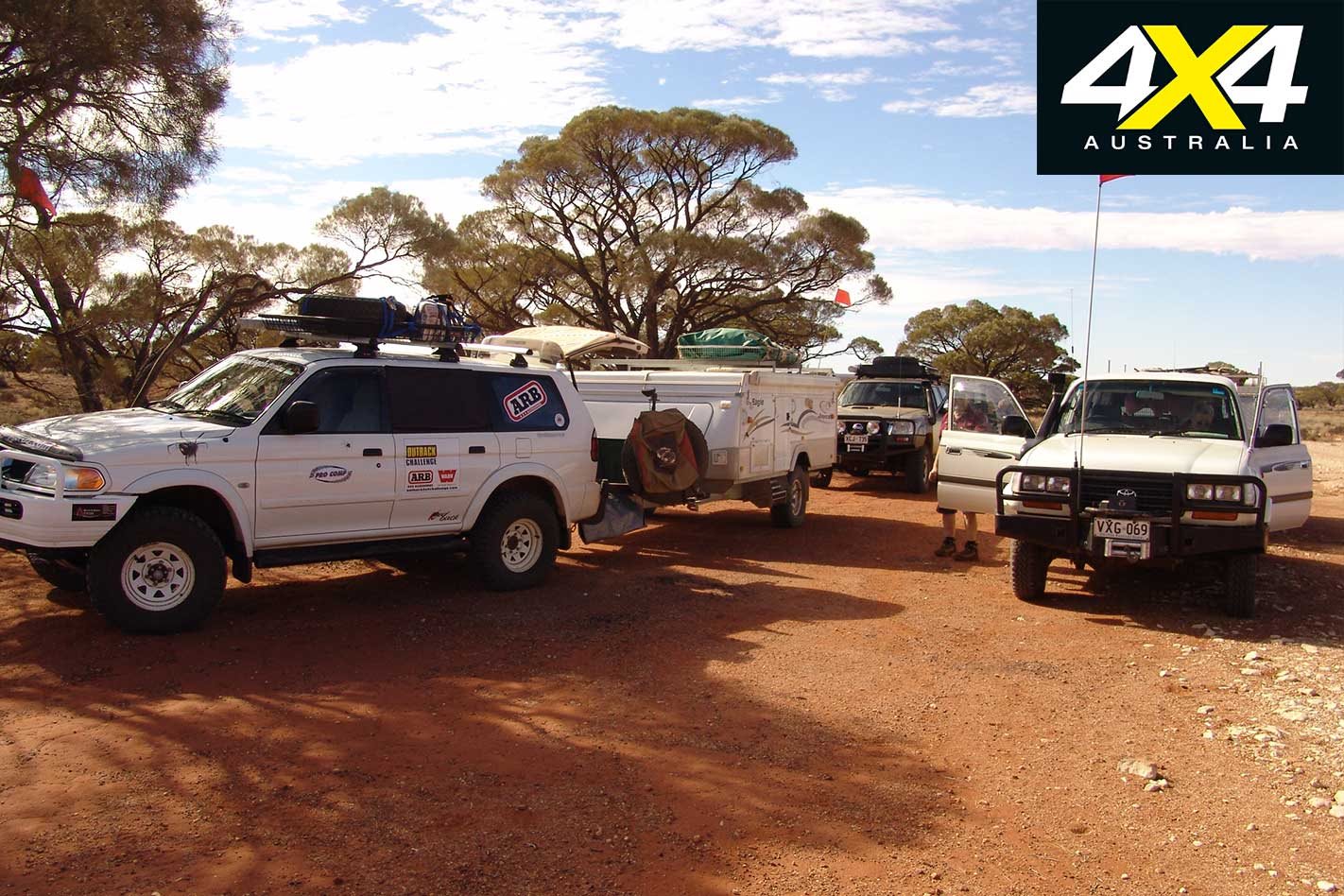 We awoke to dark clouds and reports on the radio of the Pilbara being flooded and of heavy rains headed our way. Camp was packed up and we headed west. We met other travellers at Neale Junction who were doing the Connie Sue and heading north to Warburton. Visitor books were signed and we moved on.

After about 30km we started getting into windscreen-wiper weather and the track became wetter and wetter. By the time we had travelled 50km, water on the track was 30cm deep. As the track is lower than the surrounding countryside, water rushed onto it in channels. 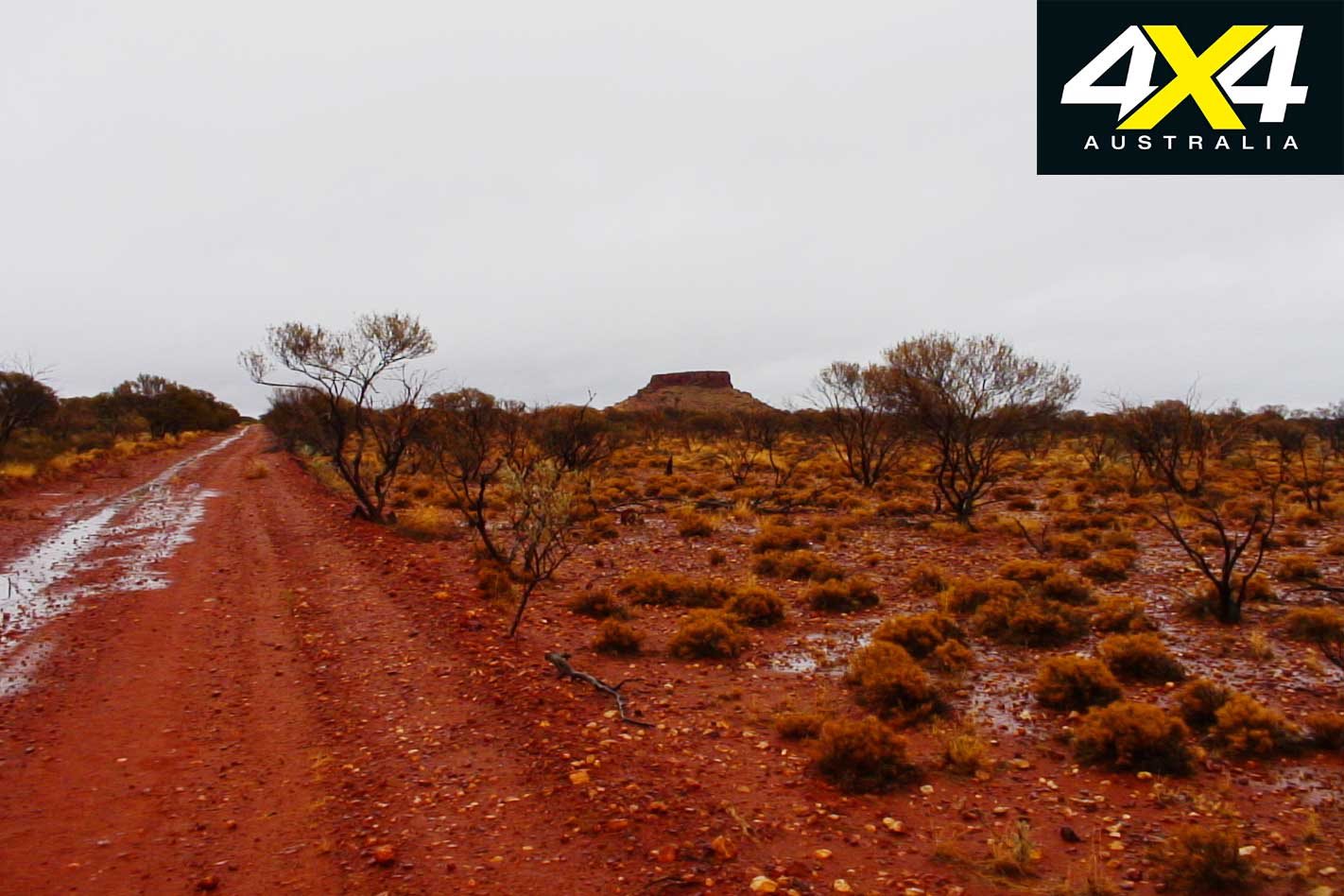 The conditions persisted until Yeo Homestead. This is effectively the end of the Anne Beadell Highway and after lunch we headed off again, avoiding some large washaways across the track.

By late afternoon we decided we needed to camp. The surrounding country looked wet and boggy, so we pushed on for another 30 minutes until finally finding a raised area with rocks and plant growth showing through. Only 170km for the following day along the smooth White Cliffs/Yamarna Road into Laverton. 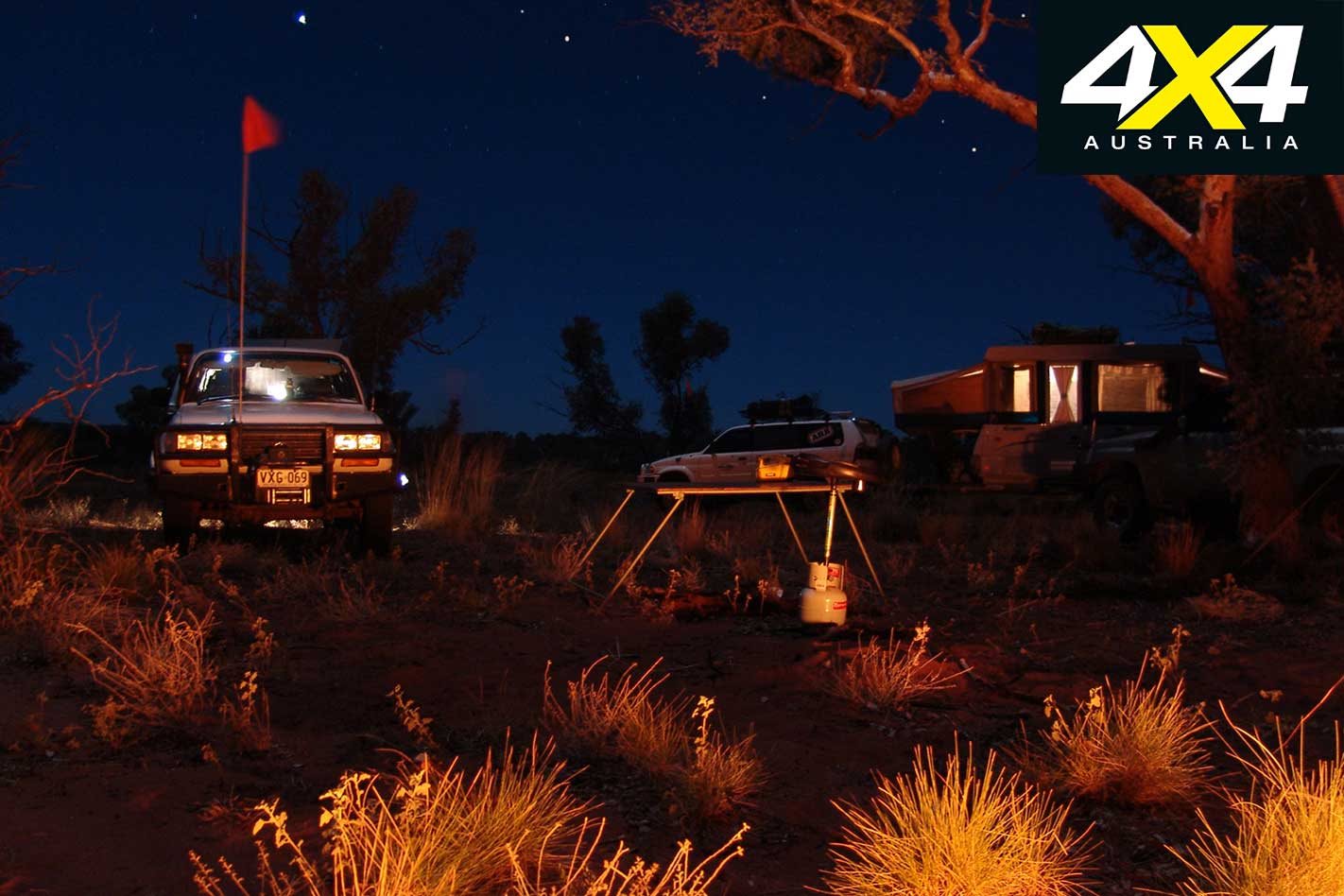 Next day’s run was uneventful but very pretty, especially around White Cliffs. We stayed overnight at Laverton to do some washing and repairs. We were now only 1800km into our 11,000km trip.

We had taken 10 days to do the crossing, which is good considering we lost a day with the camper U-bolt and three or four hours with the cracked towbar and brake problems. It’s all part of the adventure and these desert areas are a must-see for anyone wanting to experience the real Australia. 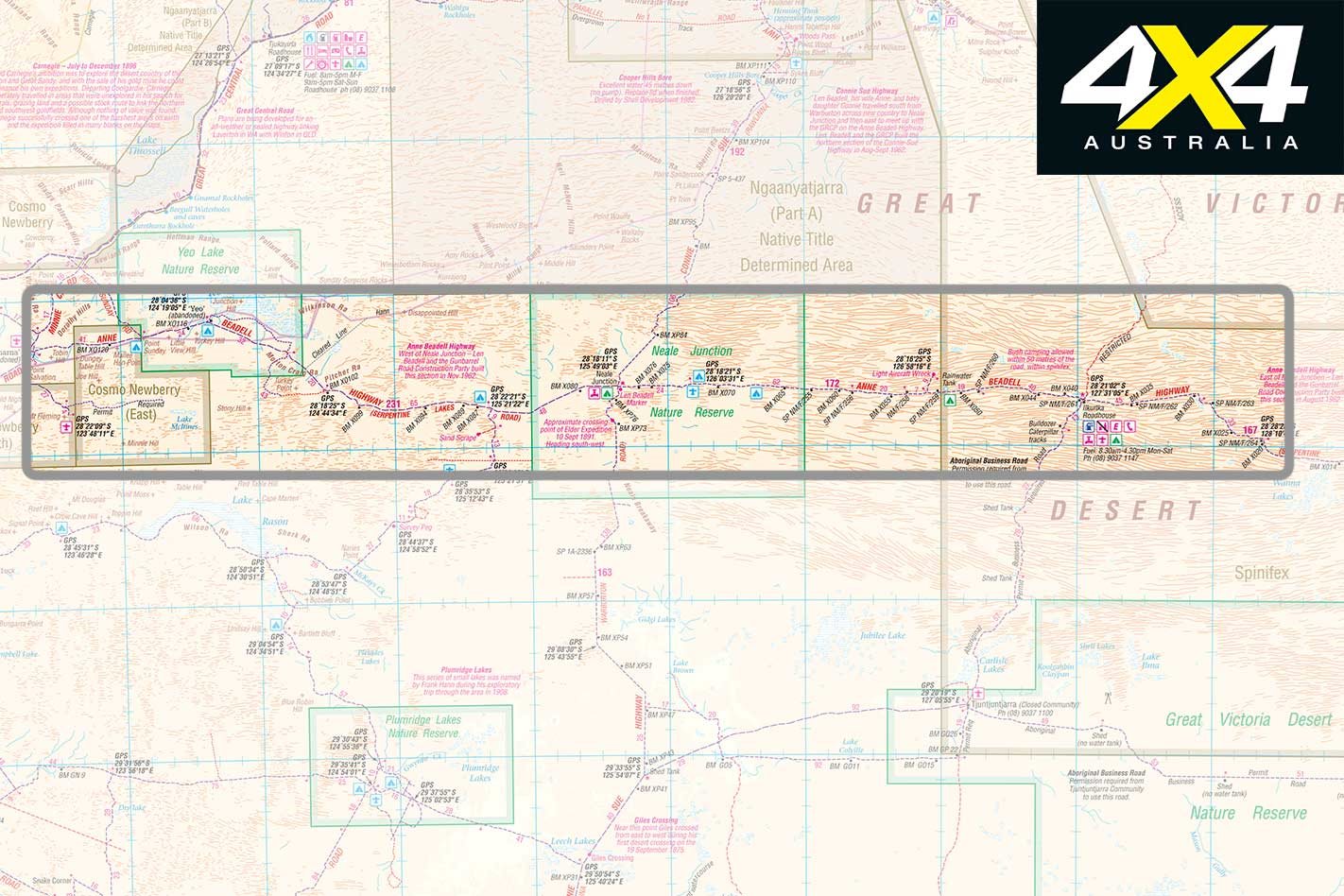 WHERE
The Anne Beadell Highway runs for 1258km from the SA opal mining town of Coober Pedy due west to Yamarna, which is 142km north-east of Laverton, in Western Australia.

WHAT TO BRING
This track is extremely isolated, you will need to be entirely self-sufficient in everything from food and water, remote-area communications, first aid, vehicle spares, etc. 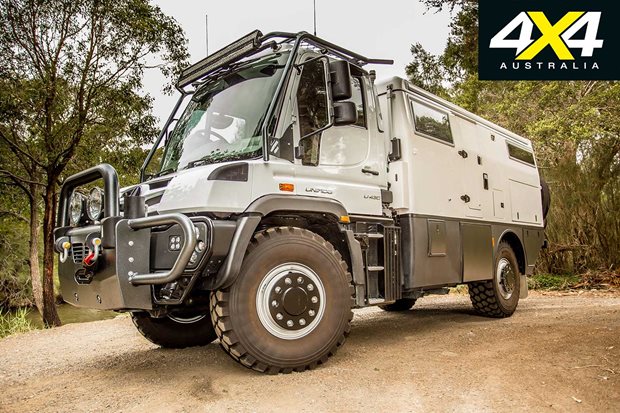 Overland giant based on the Mercedes-Benz Unimog U430 is the ultimate 4WD. 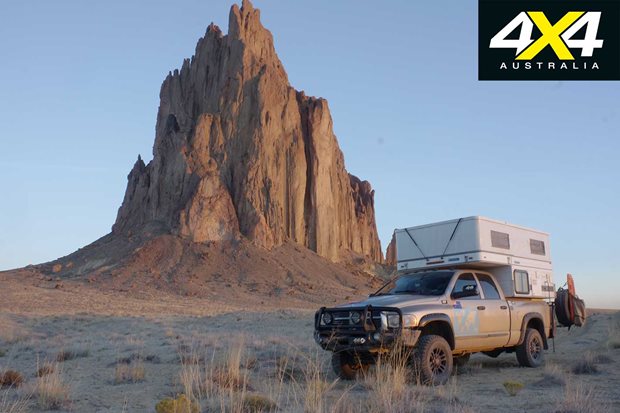 A 68,000km pilgrimage takes in some of the lesser-known delights of the USA, Canada and Mexico. 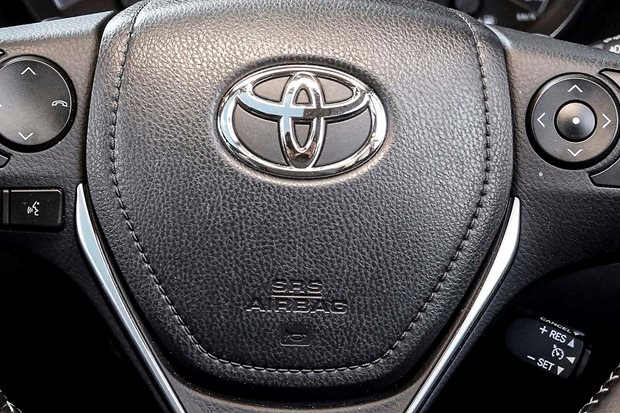 Hilux, Corolla and a slew of other vehicles are subject to a new airbag-related safety recall