EVOLUTION isn’t something that happens overnight – just ask Charles Darwin. Or maybe you can ask John Colaidis. He’s got one of the quickest street cars in the country, but it took a while to get there because John didn’t want the car to just be quick; he wanted something that was truly streetable, and that’s not as easy as it sounds.

“I could slap a big turbo on this thing and go sevens tomorrow,” John says, “but it would ruin how streetable this car is. It’s unbelievable, it’s not lazy or laggy, you just put your foot down and it goes straight away.” 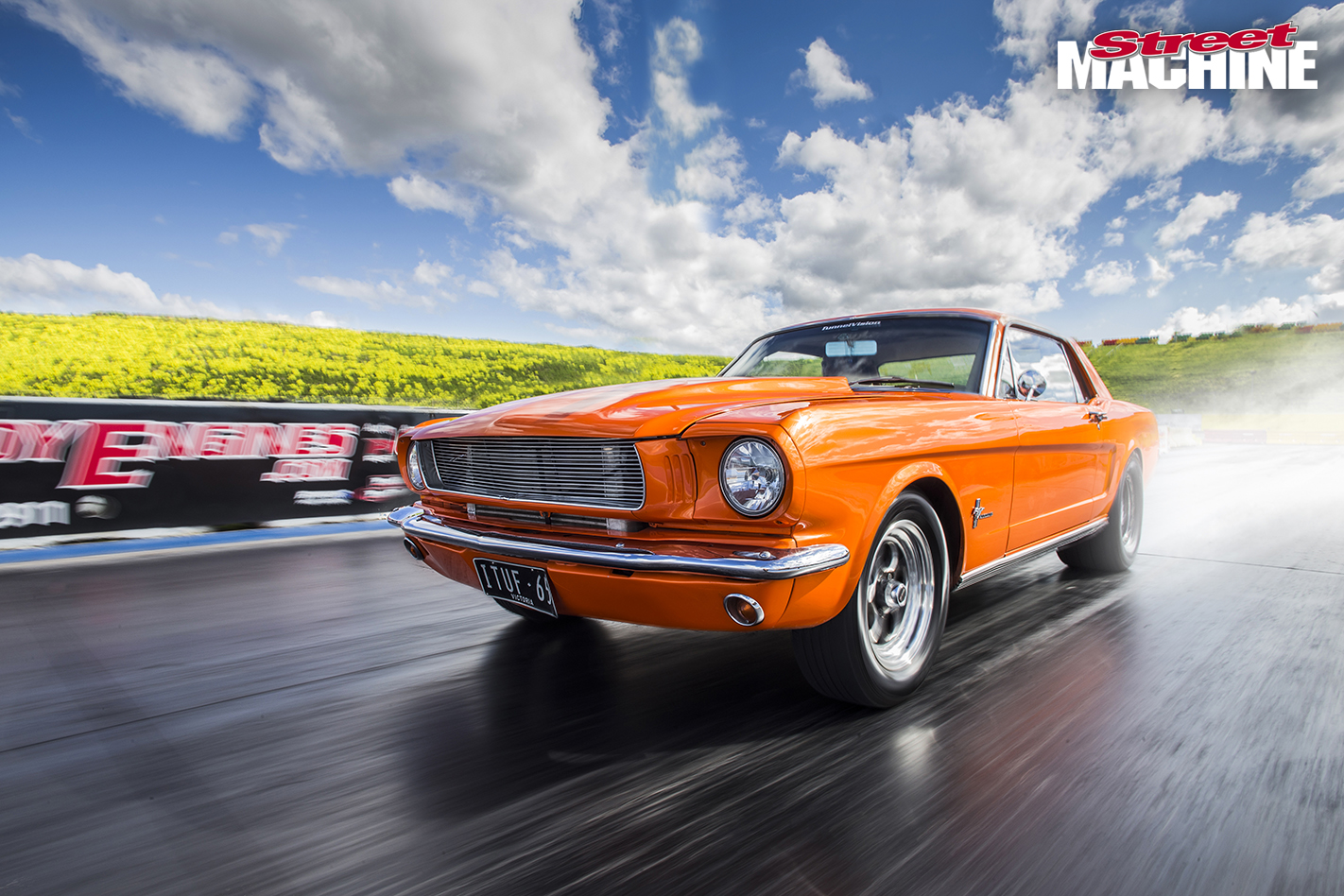 And it sure does go. John’s quickest time so far is 8.16@172mph; that alone would be amazing enough, except for the fact that John’s 1965 Mustang is only packing six cylinders, specifically an AU Falcon Intech donk.

If the car seems familiar, that’s because we featured it back in March 2011 when it was still running on barbeque gas. When we quizzed John on how different the car is now, he asked how quick we had it listed as back then. The answer was 9.80@143mph, and like most people that race, he knew exactly when that was. We might not remember our kids’ birthdays, or when our wedding anniversary is, but we remember when we shaved that crucial couple of tenths of our ET.

“Oh wow,” John responded, “it’s had everything changed since then. As you reach a limit you keep changing things to go faster. This is a totally different car.”

As previously mentioned, the car used to run on straight LPG, and with the help of Jason Ghiller from Tunnel Vision they eventually got the Mustang down into the eights, with a best of 8.94@154mph. 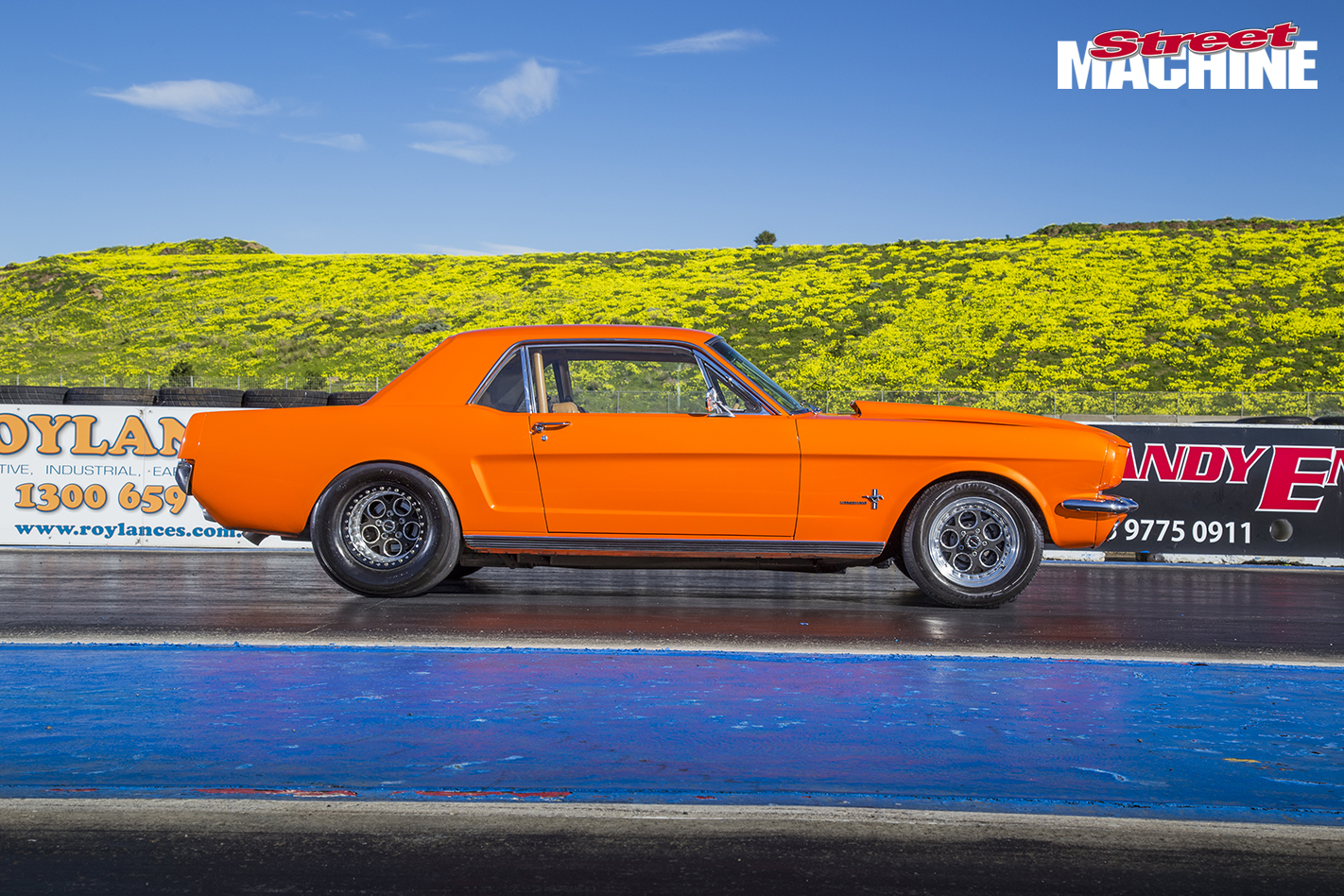 “We maxed out the fuel system,” John says. “There are advantages and disadvantages with LPG. It was cheap but you had to have everything perfect to get the best out of it. But also it would let you know if things weren’t right, through backfires and whatever, without killing it outright; it was forgiving in that way.”

Switching to E85 and Haltech injection saw the numbers tumble even further, with the times getting down to mid-eights before the crank snapped. Up to that point the car had done hundreds of runs, many of them in the eight-second zone. “I remember driving up to Heathcote one day, running 17 passes and then driving home; most of them were eights,” John says.

Rebuilding meant stepping up to a stronger billet crank. They de-stroked the AU Falcon Intech 4.0-litre six to 3.8 litres. That small reduction in stroke – we’re only talking a few millimetres – really improves the revability of the Falcon six. With the stock-stroke factory crank the AU donk struggles over 7000rpm, but by reducing the stroke John is able to spin his Mustang’s engine to 8500rpm time after time. 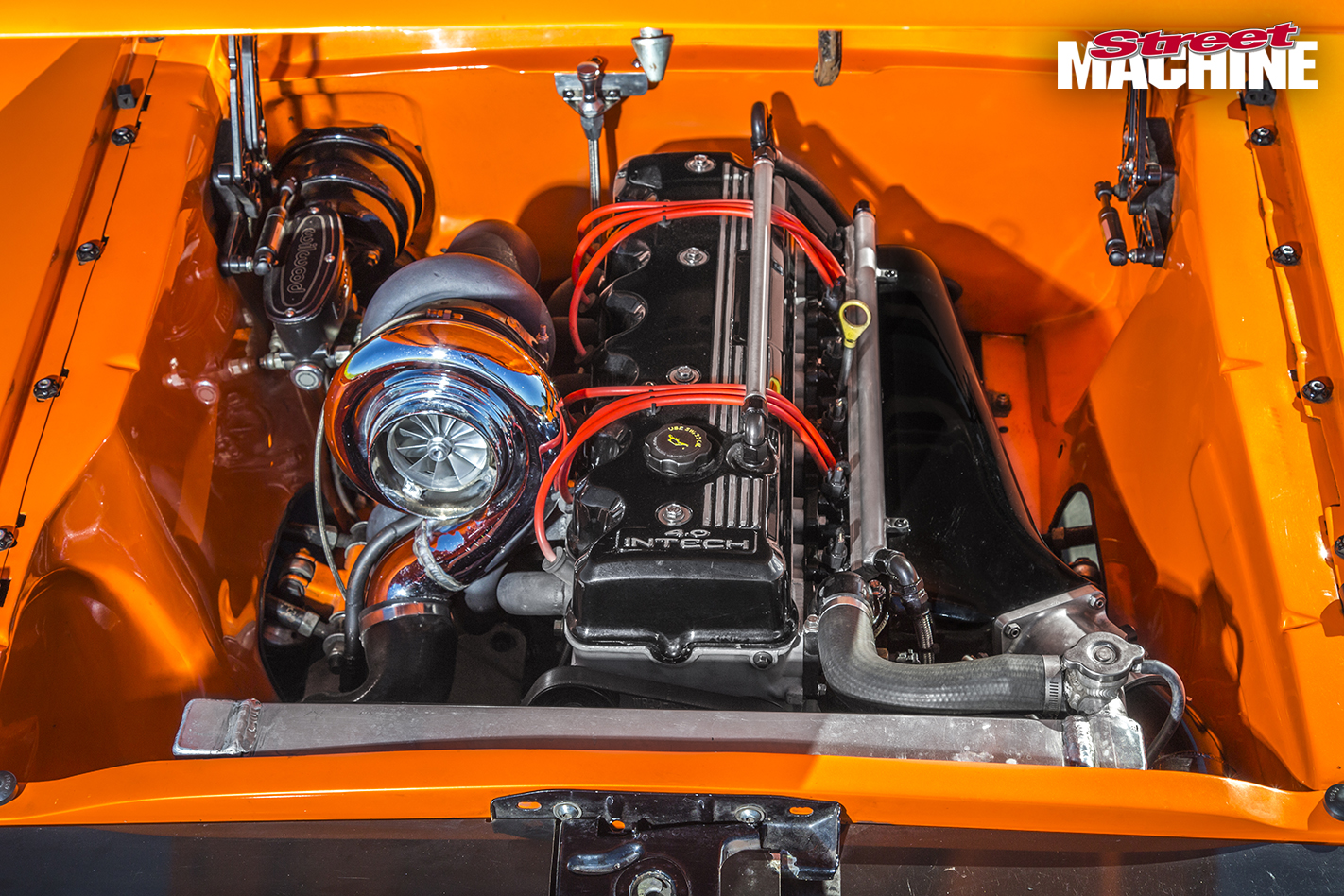 Six-pot screamer! Tunnel Vision has put together an amazing engine package using an AU Falcon Intech 4.0L, de-stroked to 3.8L for more revs. By our calculations, it’s making around 1400hp on E85

“De-stroking it isn’t a new thing for us,” John says. “The old crank was offset-ground to reduce the stroke as well, but with the billet crank and main caps the whole thing is a lot stronger.”

A main stud girdle helps hold it all together as well, while Oliver rods and Australian-made SPS pistons complete the bulletproof package. Jason from Tunnel Vision is the man behind the motor, and not only did he design the whole package, he made the manifolds and tuned it all too. The single overhead cam is also Tunnel Vision-spec, as are the custom billet rockers, which become necessary when you want to spin these engines over 6500rpm according to John. 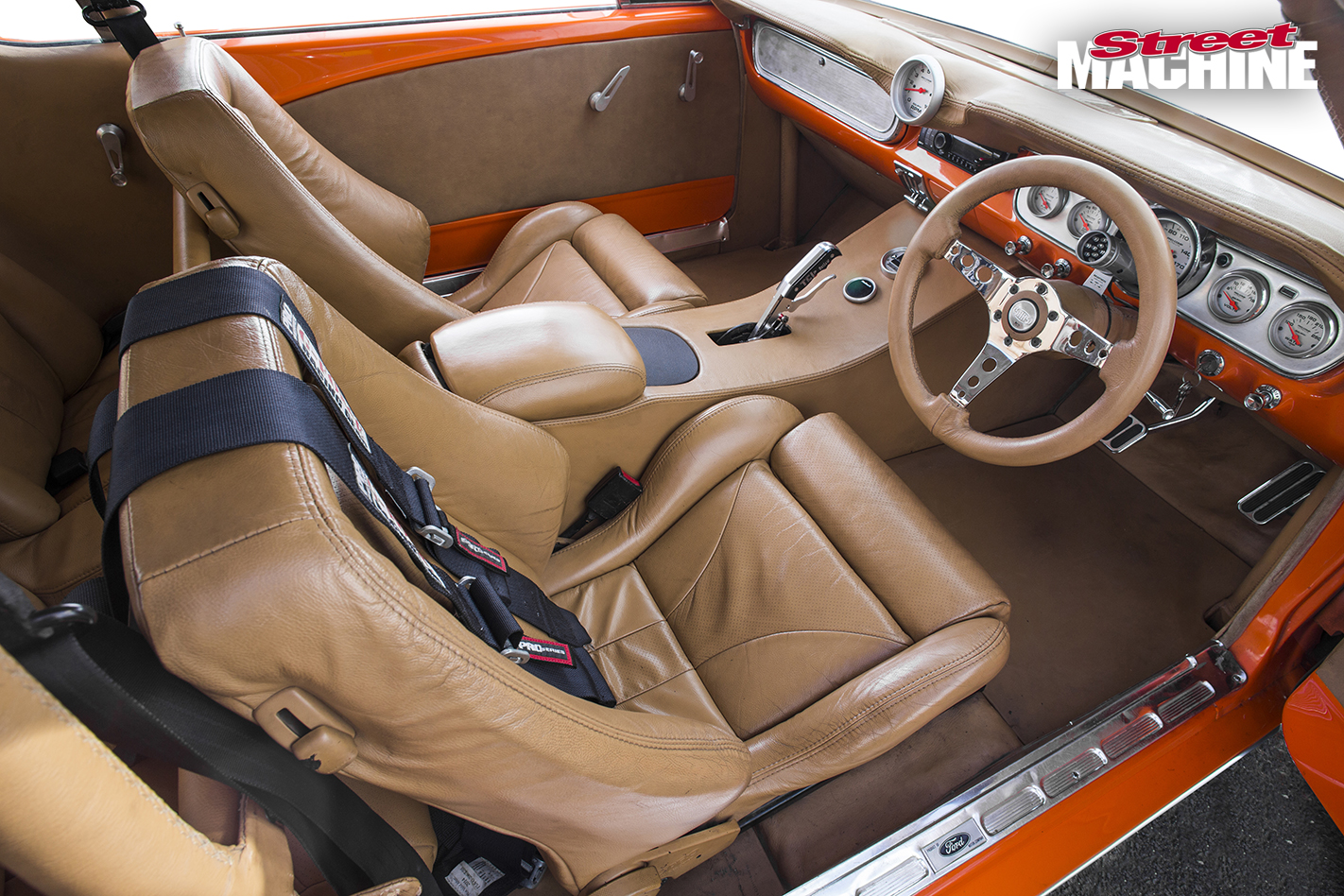 The tan leather trim is one thing that hasn’t changed much since last time we featured the Mustang. Modified Recaros in the front and a customised VY Monaro rear seat are both comfortable and stylish

The turbo is another custom piece built to Tunnel Vision’s specifications. “It’s a Garrett turbo but it’s all made up from different pieces,” John says. “It’s not as big as a GT47, but it’s bigger than a GT45.”

The Preston Automatics-built Powerglide and 35-spline aren’t going to raise any eyebrows, but suffice it to say they’re built to handle a shitload of grunt. Remember, this thing weighs in at 3600lb with driver, so that little taxi motor is punching out somewhere in the vicinity of 1400hp.

Since we last featured the car, John has had the front shock towers cut out and an American Mustang II front end grafted in. It’s a win-win situation – better front suspension and more room in the engine bay. Down the other end John had Lauria Motor Sport (LMS) move the rear leaf springs inboard of the chassis rails. They’re Calvert split mono-leaf springs and they work with Penske coil-overs to plant the rear tyres – and looking at the photos there’s plenty of tyre to plant. But don’t be fooled; John says he put the wide 325s on the rear to give the Muzzy a better stance. When he hits the track he bolts 275 pro radials on the rear, and that’s all he changes. “Other than that, the car is raced as it sits,” John says. “I don’t pull anything out or change anything else; it runs pump E85 fuel, full exhaust and radial tyres.” 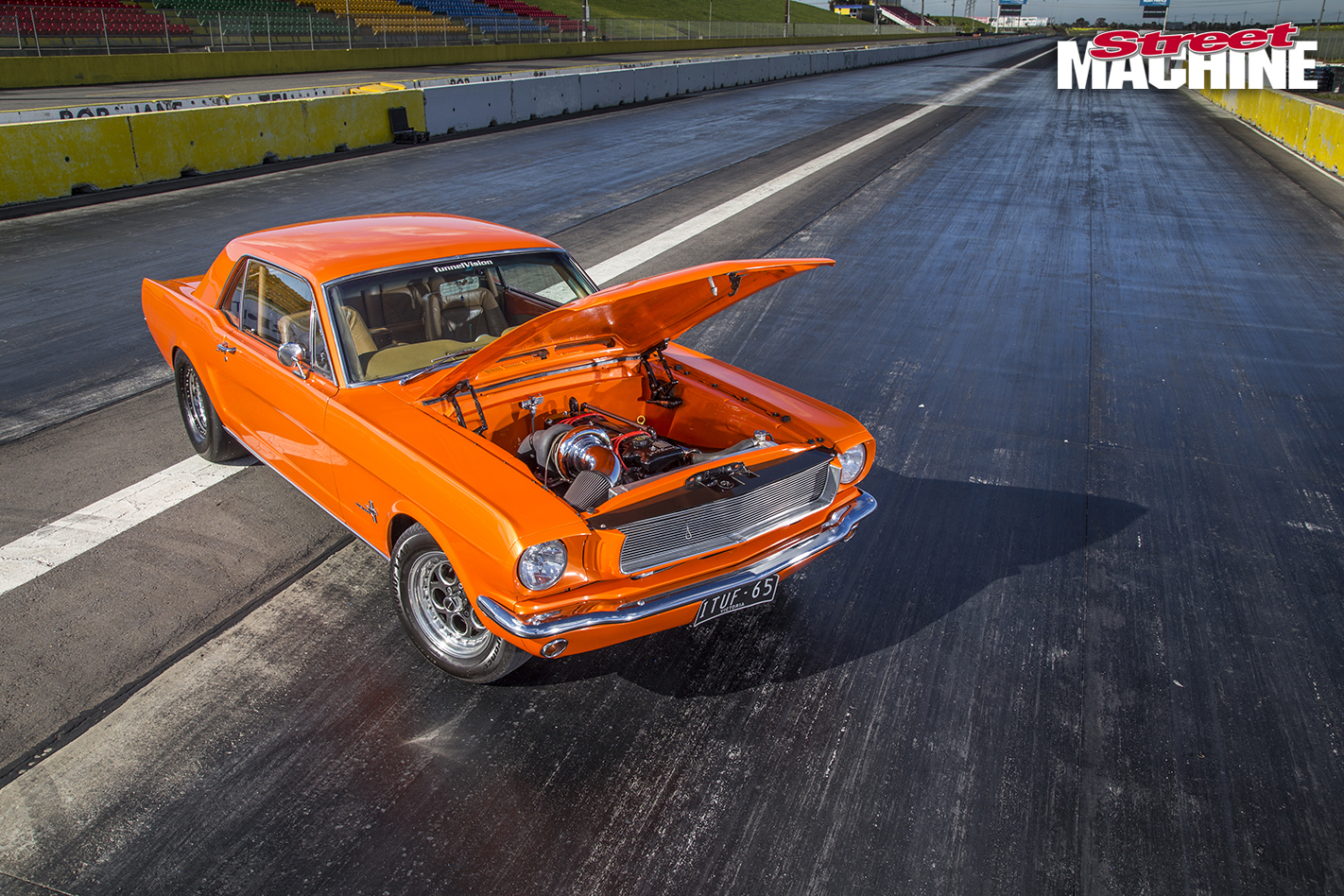 The fibreglass cowl induction bonnet is the only lightweight panel on the car, adding a little visual bulk to match those massive 325 radials up the back

All that might be set to change soon, however. John has just had the car ANDRA tech-inspected so he can run at Calder and compete in Drag Challenge.

“I just have to bolt in the race seat and intrusion bars for that,” John says. “We’re chasing sevens now, but for me it’s all about doing it in a streetable package.”

So what happens once he runs sevens?

“That’s a really good question,” John muses. “I’m not sure yet; maybe I’ll build a lighter car. I don’t want to turn this one into a full race car; it’s perfect the way it is.”