It was a David among Goliaths that cleaned-up on the world’s road, rally and race tracks, redefining the ‘performance’ car

It’s the original front-drive performance car, sparking a small-car/big-engine philosophy echoed in hot-hatches to this day.

This feature was first published in MOTOR magazine's February 2009 issue.

The Mini Cooper S championed the light and nimble, dispelled the ‘no substitute for cubic inches’ mantra, and redefined what constitutes a genuine performance car. And it became the ultimate underdog, the David that pulverised its bigger, more-powerful Goliath rivals in both racing and rallying. 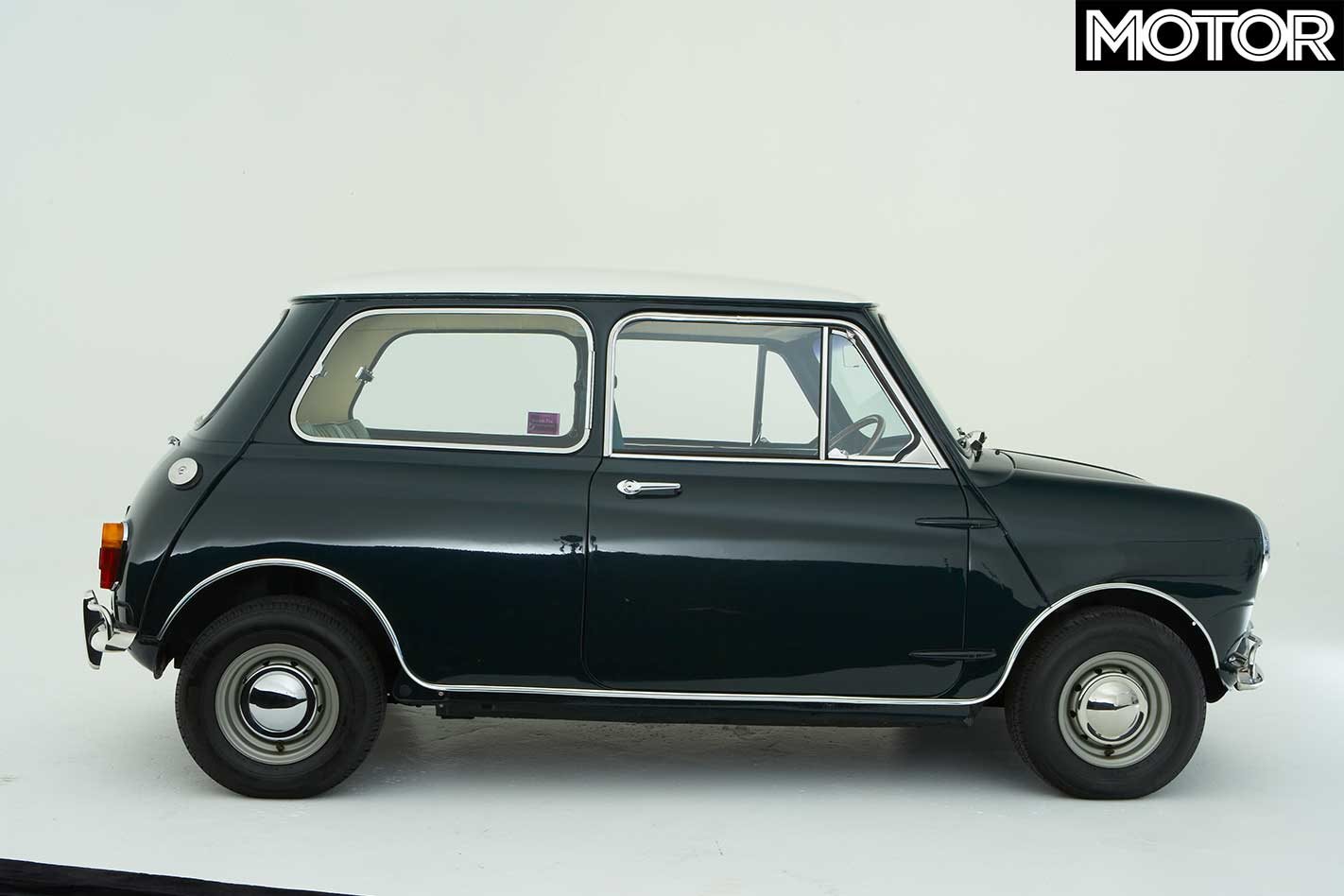 The basic 848cc Mini remains legendary for Sir Alec Issigonis’ ingeniously efficient packaging. Its front, transversely mounted engine and gearbox transaxle was revolutionary. Not only did this prove cheaper to produce, it allowed for a more spacious interior.

Cost effectiveness was assured by raiding the Morris parts bin, while its pleasing styling cues were both cheery and distinctively English. F1 engineering guru John Cooper convinced BMC to produce a hot Mini – initially a warmed ‘Cooper’ version, followed by a hotter S.

Like Carlo Abarth with Fiats the decade before, Cooper exploited the Mini’s packaging and cost-effectiveness benefits to produce an affordable, but genuinely fast performance micro.

Debuting in Europe in 1963, two years after the regular Cooper, the S’s four-cylinder was bumped up up to 1071cc, though the local version – manufactured at the BMC plant at Zetland in Sydney – debuted in July 1965 with a twin-SU-fed 1275cc engine mated to a four-speed manual ’box. 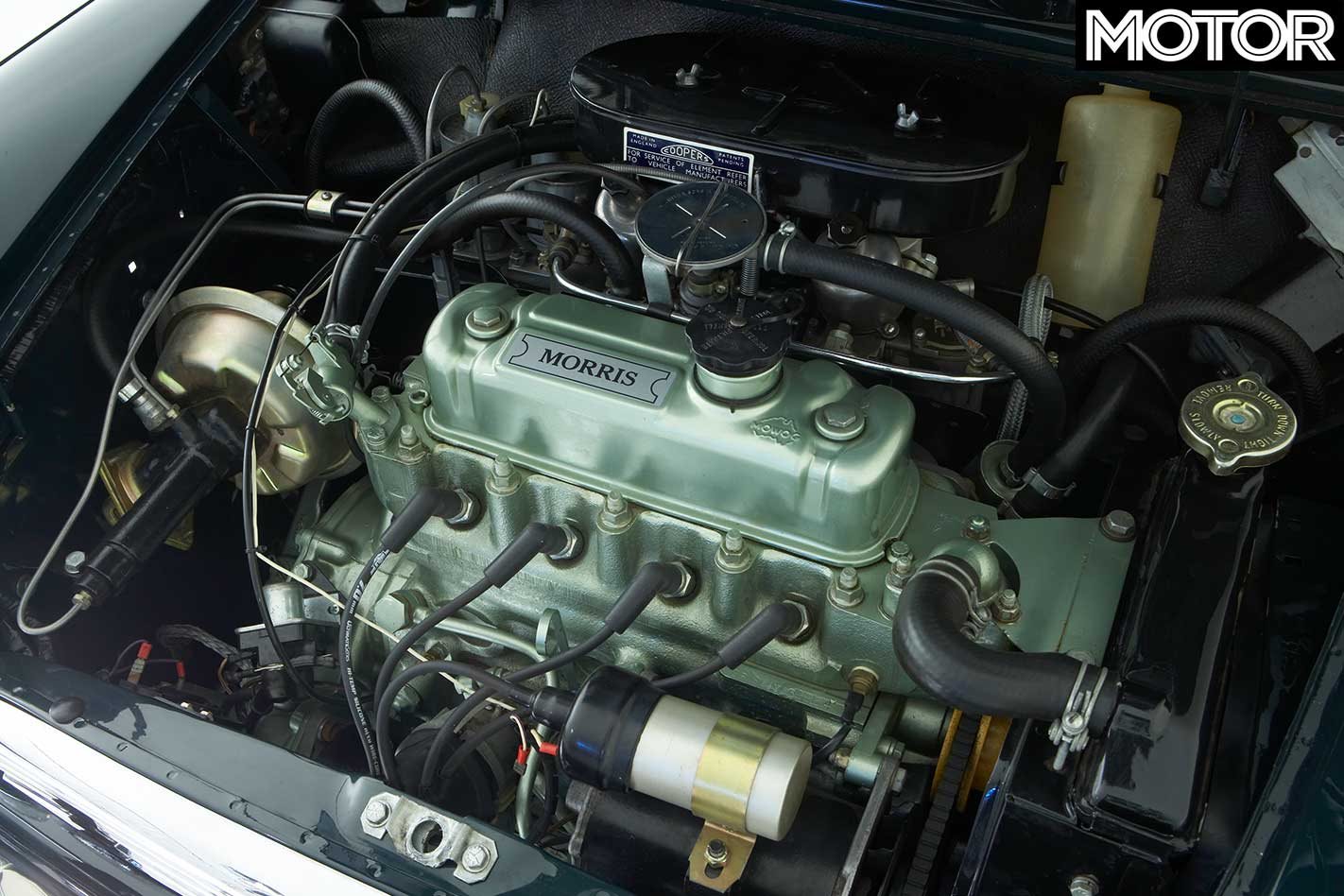 The bored and stroked Aussie A-series produced 56kW and 107Nm. It also gained larger 190.5mm brakes, a 120mph speedo, an oil pressure gauge and seatbelts (which weren’t compulsory fitment until 1969).

Make no mistake, the engine was huge for a tiny three-metre-long, 1.4m-wide Mini, dwarfed by competition rivals such as Ford Mustangs. And the Cooper S weighed a mere 635kg for a power-to-weight ratio of 88kW/tonne, more than a match for contemporaries such as the Ford Cortina GT500 (77kW/tonne) and the Renault R8 Gordini (90kW/tonne). 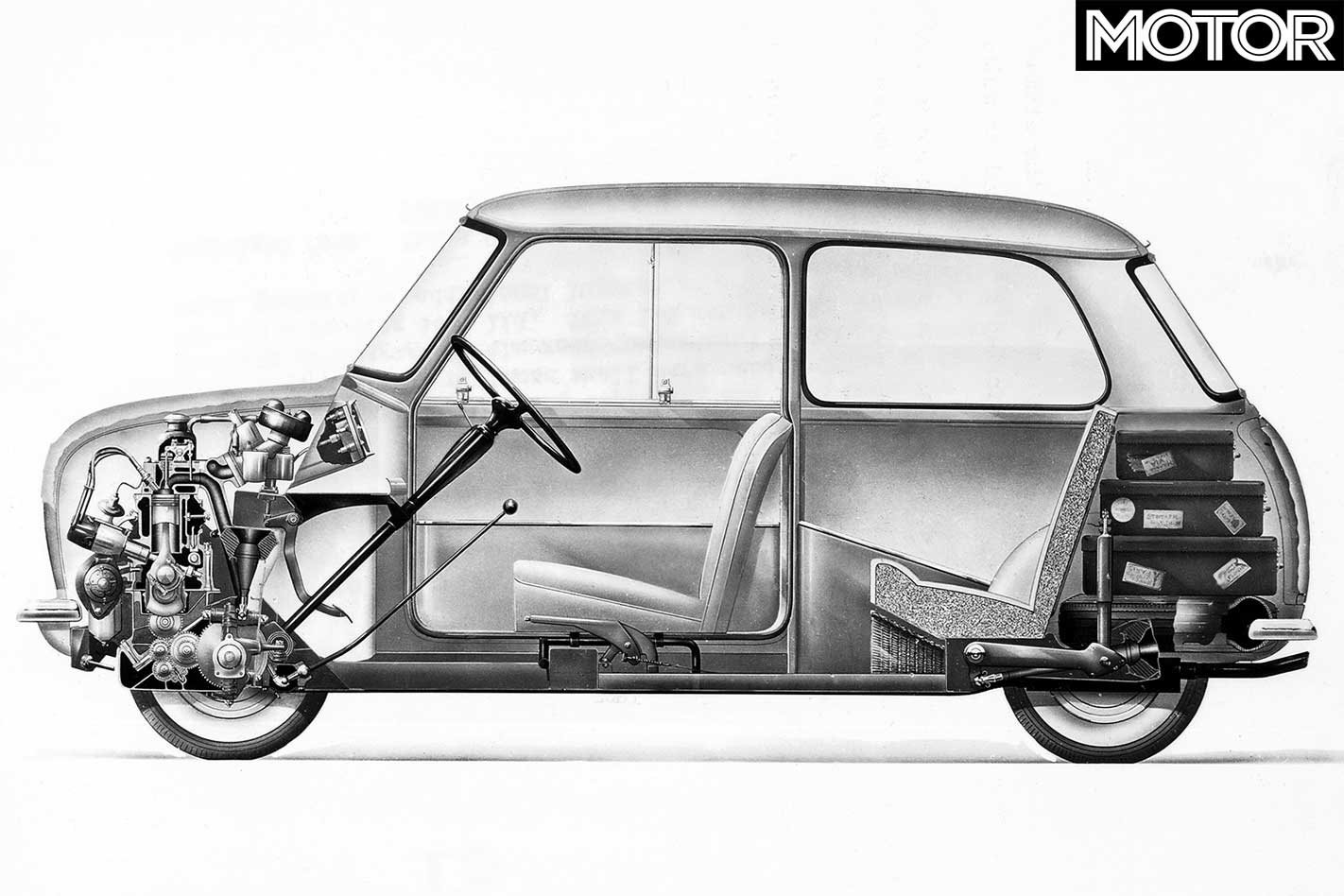 It uses interconnected fluid-filled displacers, which each contain a rubber spring, so when the fluid was displaced in one of them it was transferred to the other (front to rear or vice versa). This in turn lowered the opposing end of the car to keep it level. If both the front and rear hit bumps simultaneously, then the rubber springs came into play.

The Cooper S initially etched its name in stone by twice winning the Monte Carlo rally. And it repeated the effort in ’66 by finishing first, second and third. But a quick rule change saw the victorious Cooper S of Timo Makinen disqualified, handing the win to Finn, Pauli Toivonen, in his Citroen DS21. But even Toivonen knew it was a token victory.

“None of us dreamed that the stewards would turn the results upside down, and for such a stupid reason,” he admitted. 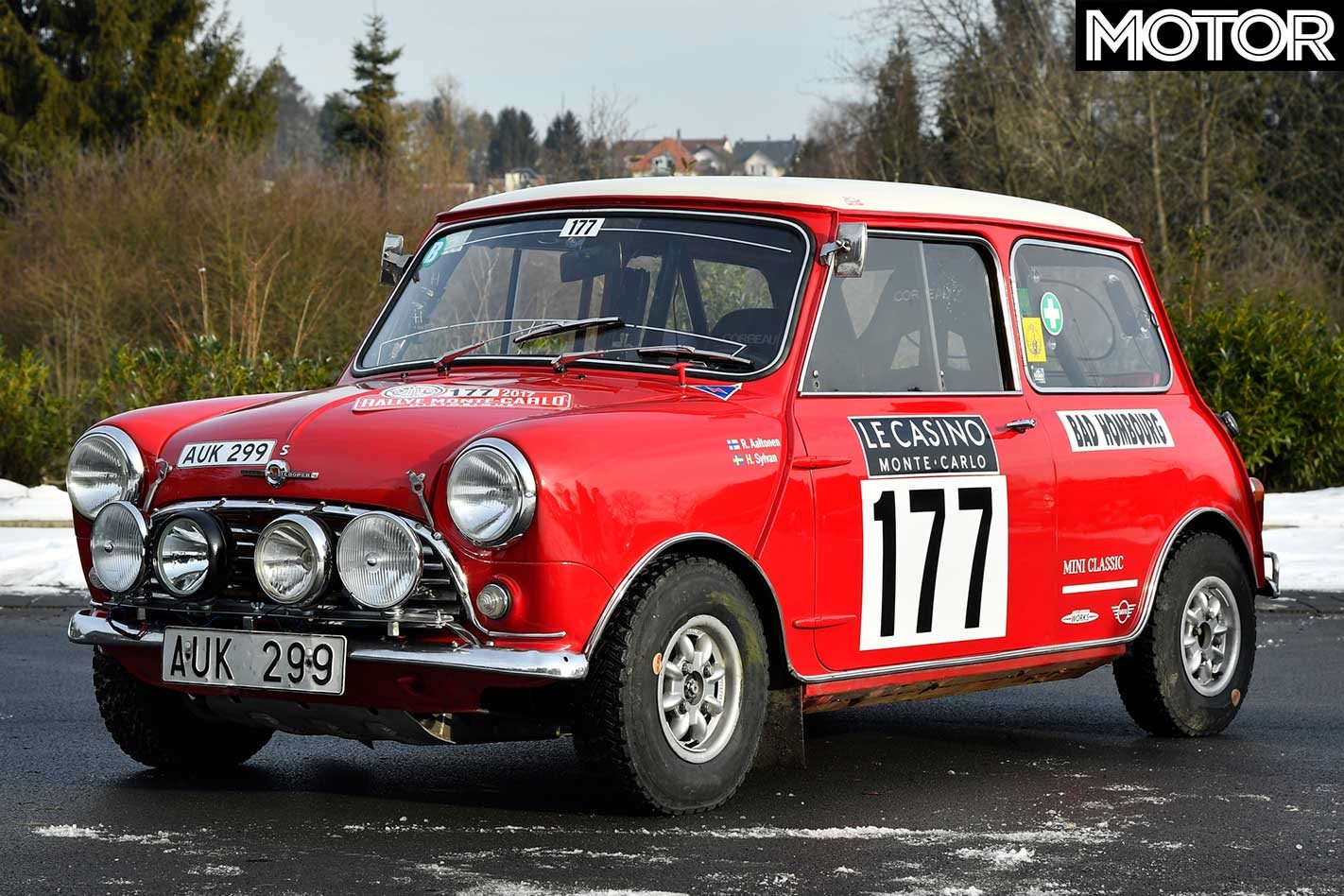 The Minis were outlawed as their spotlights were declared non-standard and therefore deemed illegal. The BMC team – rumoured to have spent £10 million on the event – threatened to boycott. But it went one better, returning in 1967 – sans the spotlights – to win the rally, with Rauno Aaltonen and Henry Liddon.

While outlawed at the Monte, Bathurst ’66 saw a 17-strong Mini assault on Mount Panorama, with BMC factory support.

The production-car race was categorised into price points back then, with the maximum capacity (55-car) field led by the most expensive, Class D. This is where the Mini, once again, had its rival by the balls: the Cooper S cost just $2280 in 1966, while the R8 Gordini asked $2630 and the Cortina GT500 $3006 . And don’t even bother comparing the running costs of racing a Cooper S against a V8 or Holden six…

So for Mount Panorama’s classic in ’66, the Minis started behind the Ds. When the chequered flag dropped, the Cooper Ss had filled the first nine places. No other car in the race’s history has got close to repeating such dominance. 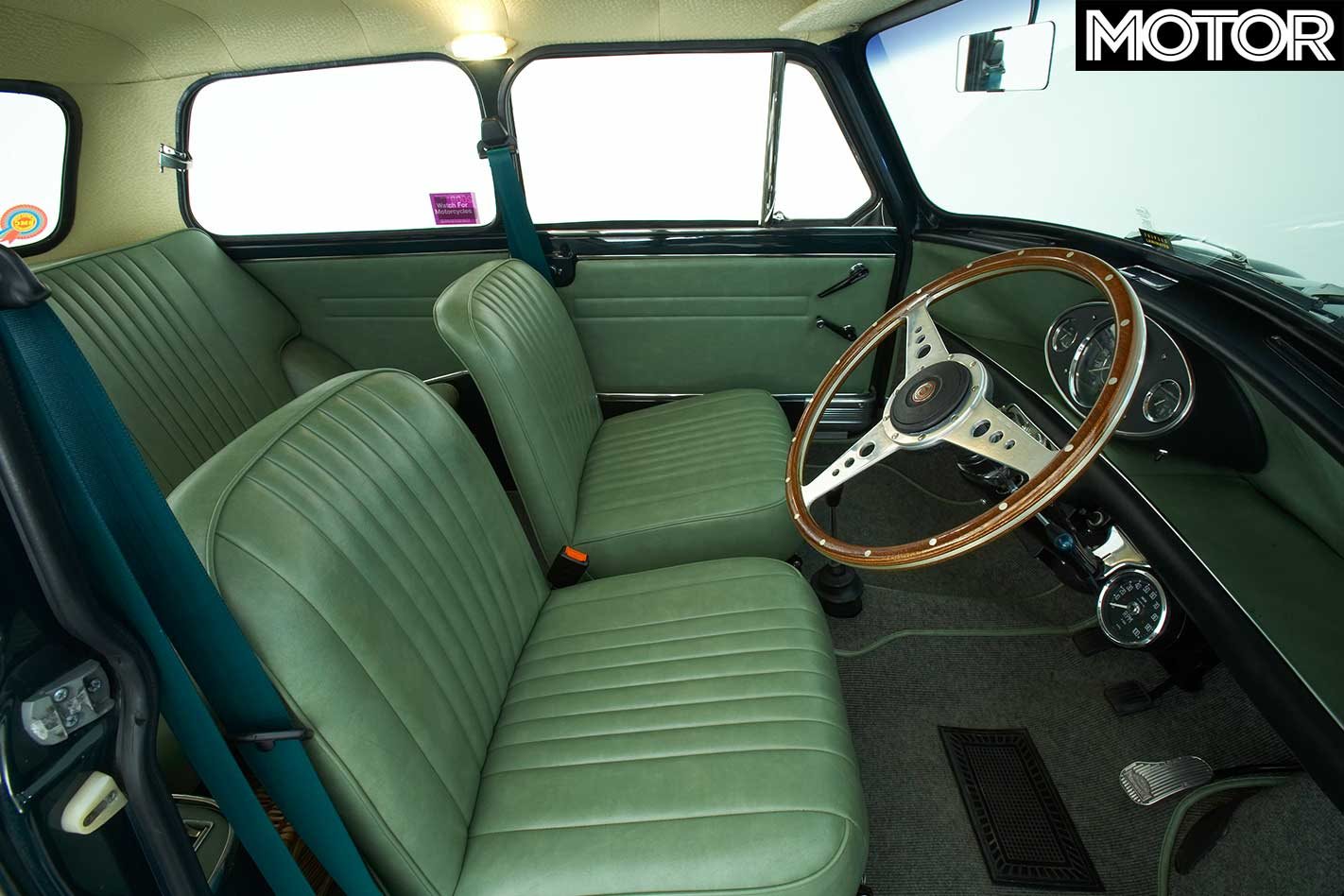 In conquering the mountain, the Cooper S defeated rivals that not only included Renault Gordinis, Isuzu Bellets and Volvo 120s, but it crushed the more expensive, more powerful VC Valiants with their 134kW 4.5-litre V8s. And while the Cooper S never won the local touring-car championship, drivers such as Brain Foley (and his legendary dices with Pete Geoghegan and Bob Jane’s Mustangs) showed the car’s performance pedigree.

BMC never intended the Cooper S to be a race car, but the tiny terror literally won thousands of events across the globe, and the irony of its success was further frustrating for rivals because of its humble and practical – not performance – origins.

While Volkswagen’s original MkI Golf GTI is generally credited as the instigator of the hot-hatch, the Cooper S was the first front-drive, pint-sized performer that espoused such a configuration. It sparked a paradigm shift in the definition and execution of what makes a performance car, as until the Mini Cooper S came to the fore in the mid-1960s, you needed a seriously powerful and large machine to win any sort of motorsport contest. 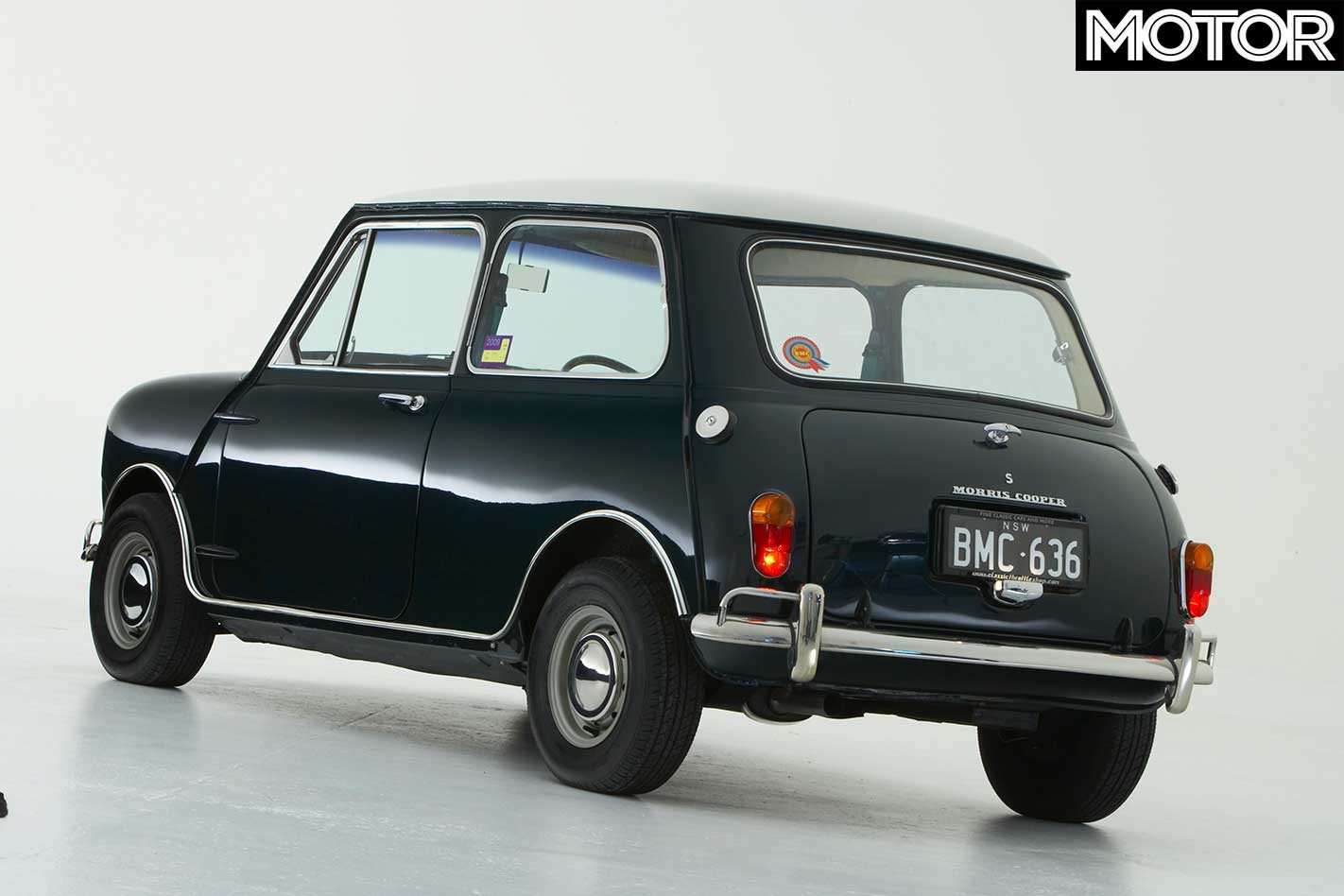 Its legacy remains in the form of the Golf GTI, the Corolla SX/GTi and Suzuki Swift GTi hot-hatches of the ’80s and ’90s, as well as vehicles such as the Subaru WRX and Evolution Lancer – take a small, everyman’s motor car, fit a large engine and create a sparky, fun, yet practical screamer.

Only a handful of years later, Holden subscribed to the ideal in putting the LC Torana GTR and later GTR XU-1s up against Ford’s 5.8-litre V8 Falcons. The Mini Cooper S demonstrated that when it comes to performance supremacy, there’s more at play than simply piling on the horses.

Where can I get one & what’s it cost? 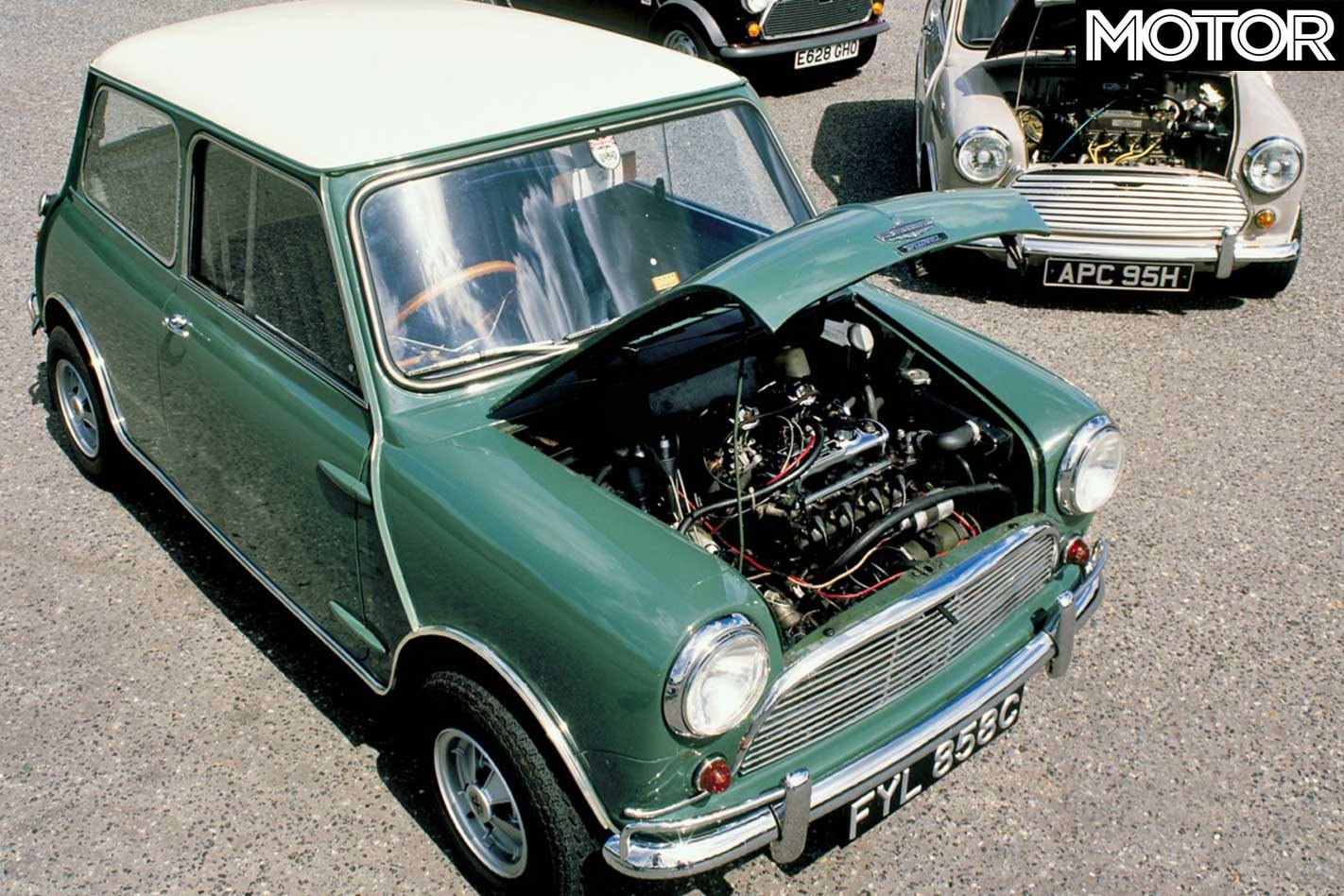 Shannons have a number of Cooper S models on their website, some Australian and some imported, with the highest price being $19,000 for an Aussie 1275cc in British Racing Green. We also found a beige 1968 model that went for $13K, and an immaculate 1968 Cooper S with 65,000km on the clock for $25K. So per inch, they’re not cheap.

Finding unrestored versions is difficult, so the buying seems to be a broad range from low-teens to around $30K.

As always, specialist collector’s dealers are a smart way of finding a genuine Cooper S. The ’66 Oz-spec example photographed here is owned by the Classic Throttle Shop in North Sydney (02 9922 2036 or classicthrottleshop.com). And, despite shooter Bateman’s obsession, it’s actually not for sale, such is the regard this vehicle is held in.

AS OF 2018: Our sister publication Unique Cars had recently called $32K a 'steal' for a tidy '69 Cooper S, but one 1964 Cooper S is for sale on the TradeUniqueCars classifieds in tidy but modified condition for $24K at the time of this update.

Why wasn’t it thought of before? 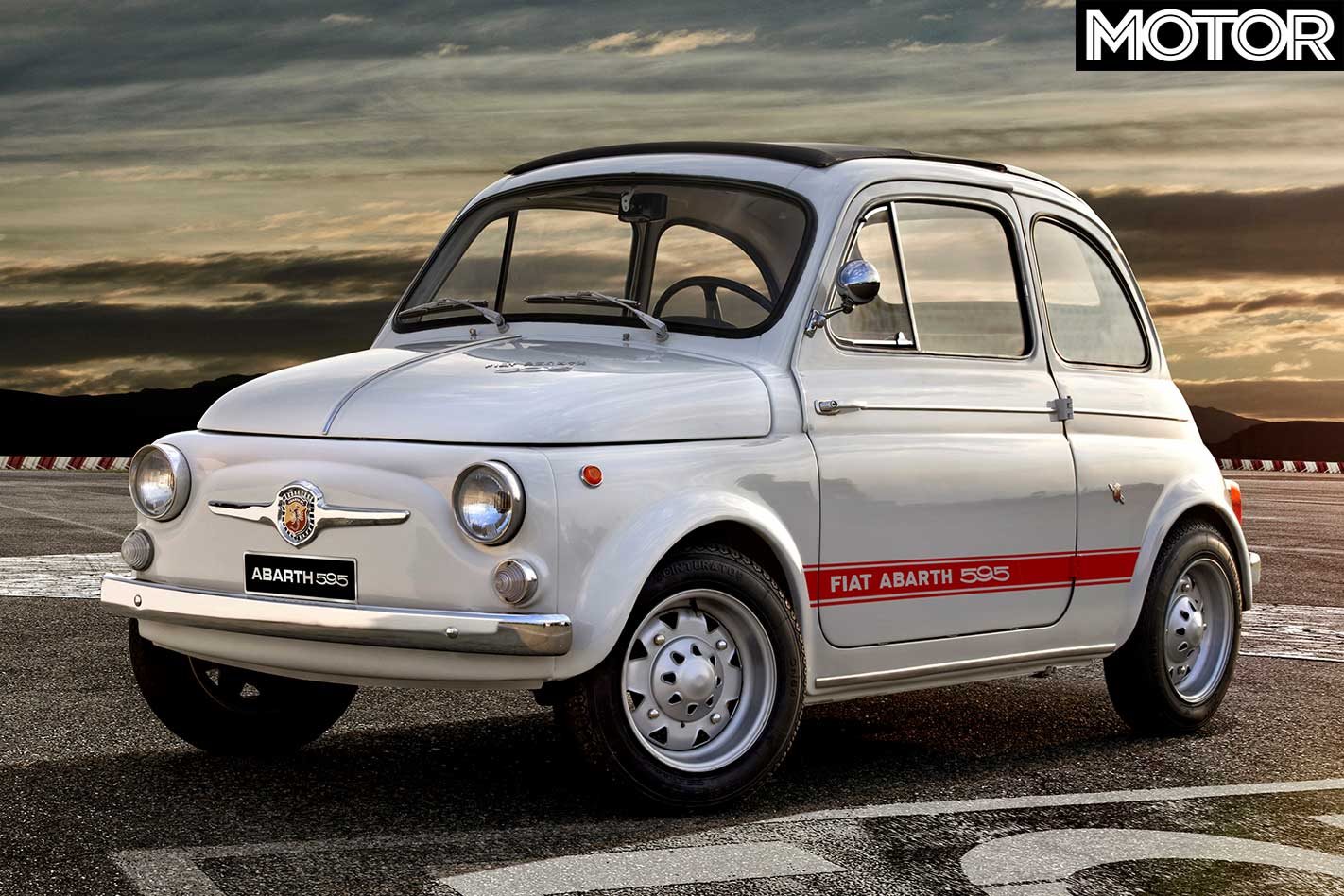 While it may remain the most legendary of the little ’uns, the Mini wasn’t the automotive world’s first pint-sized hottie. Fiat’s smaller 500 was introduced with a 10kW 479cc air-cooled twin in 1957, two years before the original 848cc Mini, and the souped-up 19kW Abarth version pre-dated the 1961 Mini Cooper.

Indeed, it was the Italians – Fiat specifically – who’d set the small performance benchmark with Carlo Abarth’s tuning house, producing wee weapons such as the Abarth 600, which boasted a 1.0-litre engine in its largest form.

What made the Cooper S such a groundbreaking vehicle, however, was not just its on-paper stats, but the effectiveness of its execution, meaning it had no direct rivals when it launched. In simple terms, nothing came close to its combination of power-to-weight and agility. It moved the goal posts, dominating race and rallying for the best part of the 1960s. 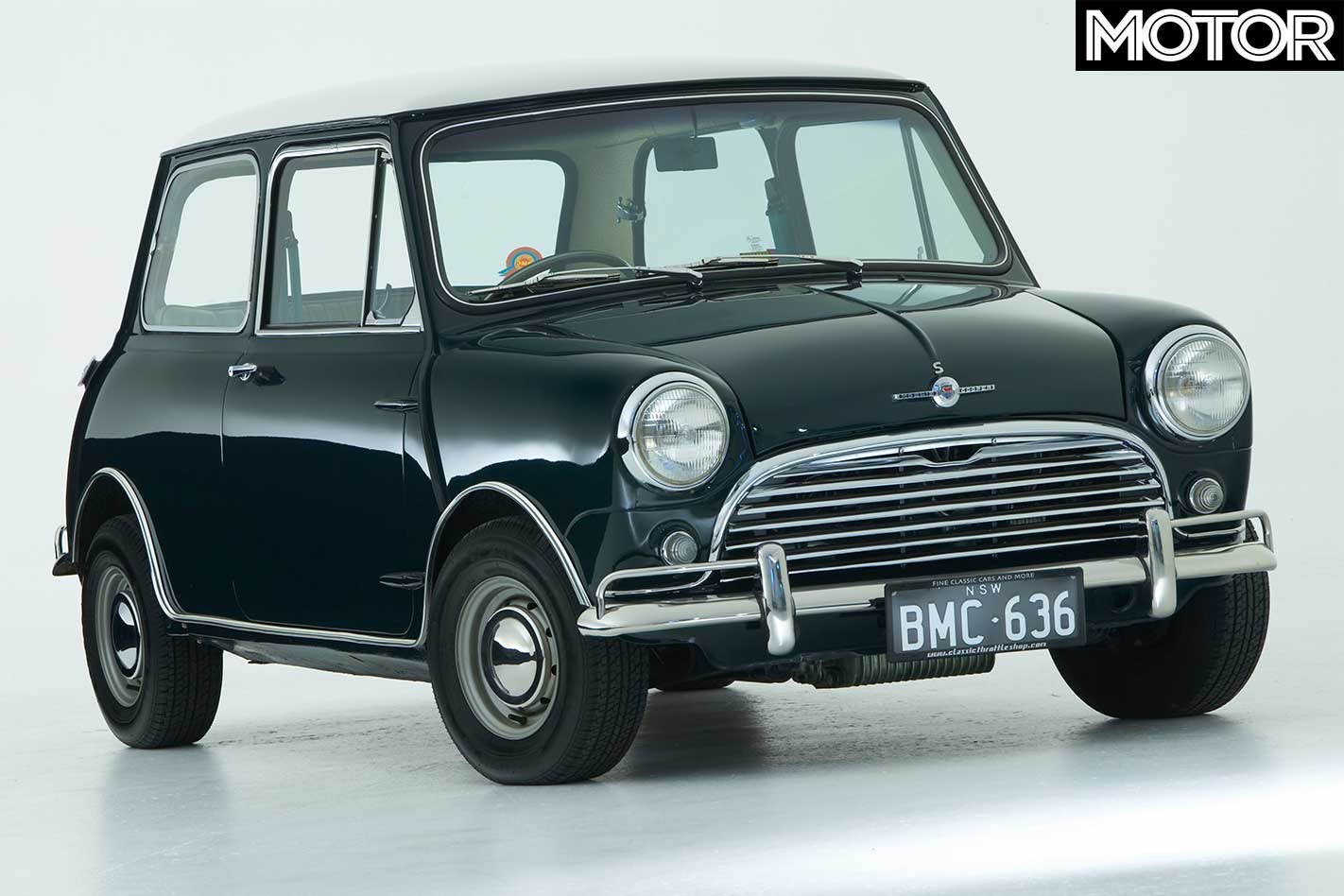 1 - Handling
The chuckability of the Cooper S is superb. This is a car that set the benchmark for front-drive pocket rockets, offering so much fun for such little effort.

2 - Credibility
Respected and admired by people of all walks of life, the Cooper S doesn’t scream ‘money’ or ‘wanker’ like many of the cars that it beat in competition.

3 - Size
Storing, parking, even refuelling a Cooper S is a breeze with its Dinky-like dimensions. Still, that doesn’t mean they’re any cheaper to restore, mind you.

1 - Size
With the proliferation of 4WDs on our roads, and the reduced visibility of modern cars, the Mini feels more vulnerable than ever. It was never designed to crash!

2 - Authenticity
There are a lot of fakes around, so do your research and make sure your Cooper S is legit. Every part can be faked, so checking body and engine details is a necessity.

3 - Corrosion
Rust can occur in the door sills, hinges, seams, the boxed area between the front screen and guards – pretty much anywhere. Replacement sections are available, luckily. 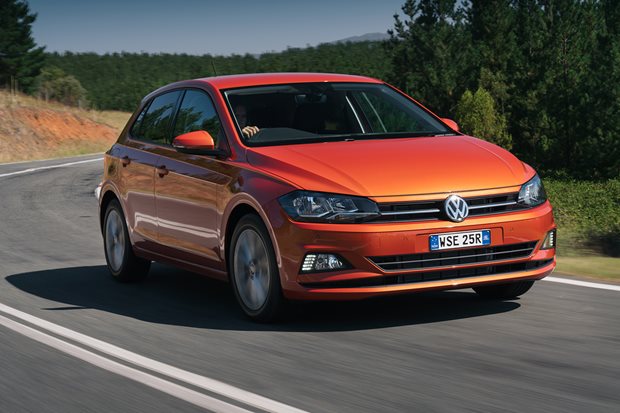 Volkswagen’s all-new, bigger Polo has raised the benchmark for the light hatch segment. Here’s what you need to know. 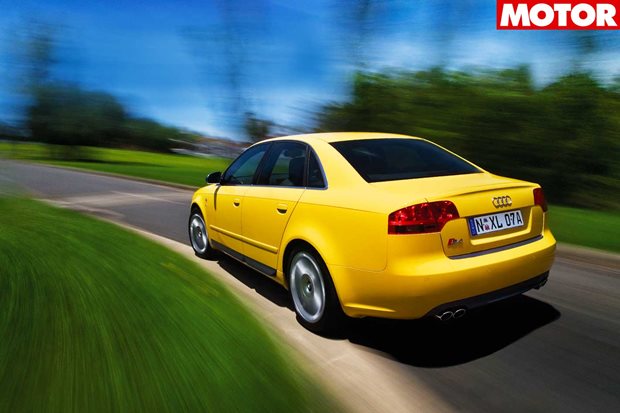 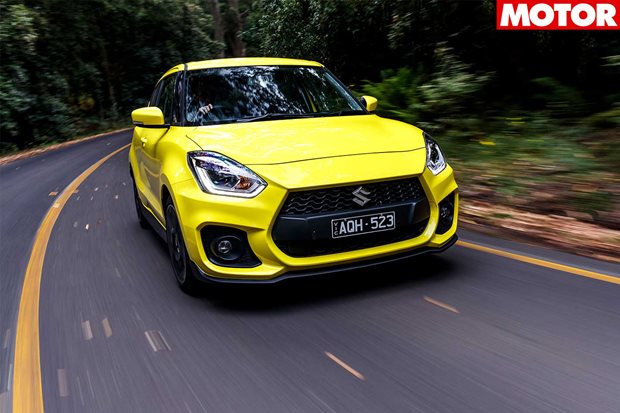 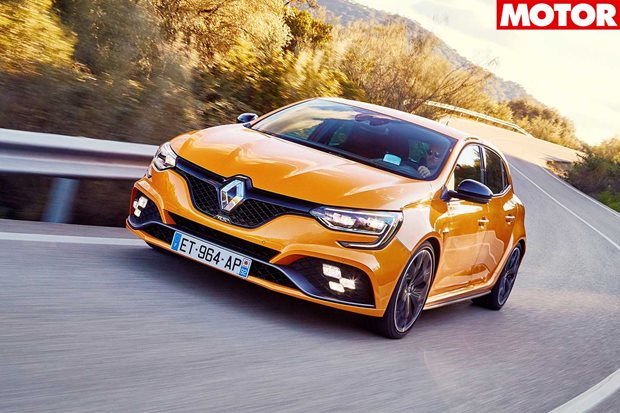 Talk is cheap. It’s time to see if the hyped Mégane RS can beat its own benchmark