Toyota’s one-make race series kicks off for its second year. We join the sport’s young guns on their first day out at the track

RACE cars have kill switches. It’s an important thing to know when you’re sitting there in front of the garage, the pit lane marshal urging you on, and repeated stabbing of the start button fails to fire the engine into life.

We’re at Sydney Motorsport Park, where Toyota is launching the 2017 season of its one-make wonder, the Toyota 86 Racing Series.

The series is into year two of a three-year deal that pits talent directly against talent, with tightly controlled cars piloted by a mix of experience-hardened mentors and pimple-faced rookies promoted as an affordable bridge between karts and tin-topped racers.

But rather than just hold a dull presser to reveal this year’s circuits, Toyota invited us to drive the cars at the series’ test and practice day featuring a host of young up-and-coming motorsport talent.

And that’s how we ended up here now, where I’ve contorted myself through the roll cage and in behind the Motec unit-mounted steering wheel, and now sit crunched and compressed into the non-adjusting race bucket.

From where I sit, it looks like a conventional Toyota 86 GTS, apart from the fact that it’s a stripped-out interior and someone appears to have taken to the door card with a reciprocating saw, leaving only the bit that houses the power window controls.

The start button is still in its usual place above the driver’s knee, so I pop the clutch in, punch the button… and nothing.

“Kill switch, kill switch,” the pit lane marshal suggests helpfully, pointing to the dash as the custom exhaust rumble of the two cars that will follow me out to the track reverberates through the garages. 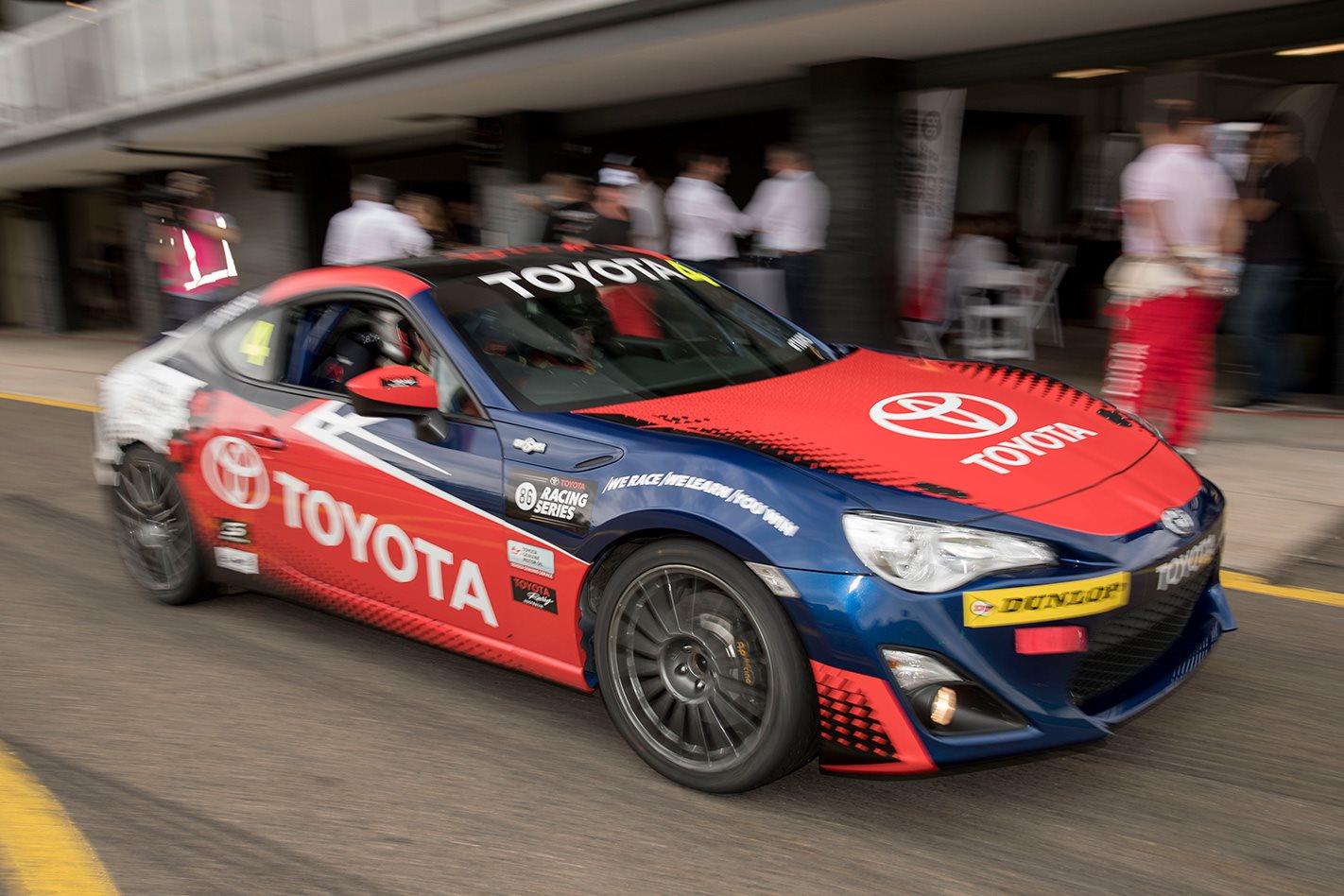 Luckily I have a bit of help in the car beside me. Ben Porter is more used to piloting GT cars around Bathurst, or dicing for position in the Porsche Carrera Cup, but today he’s in the jump seat helping rank amateurs such as me tick off three laps of the circuit. His first helpful act of the day is to flick closed the big, red electrical cut-off switch mounted high on the dash, lighting up the electrics.

Another stab at the start button, and the 179kW/246Nm 2.0-litre flat four fires into life. After exploring the limit of the long-travel clutch pedal, we’re rolling out for my first-ever lap of Sydney Motorsport Park’s extended 4.5-kilometre long circuit.

For a full-blooded race car, the track-spec Toyota 86 feels just as easy to drive as the road-going version. There’s a new low-inertia clutch introduced to the gearbox this year to help cut costs (drivers who flat-shifted last season noticed the old one becoming something of a regular service item), but otherwise this is the exactly same spec car we compared with the regular road-going 86 GTS last year.

The first lap is a sighter, a nervous and cautious feeler with the six-speed manual mostly in third gear. I already notice several things I’ll need to be cautious of, such as the big drop-out just past the entry into the fast left-hand sweeper that is turn one, the late, late, late apex at turn three, and the blind entry to the hairpin at turn 11.

Ben is talking me around the track, his voice lost in his full-face helmet, the roaring cyclone of wind and road noise and the rasp of the exhaust as I short-shift every single bloody gear change despite trying to wring them out. I’m relying on his hand gestures to guide me as he motions towards the side of the track that will give me the best corner entry, and a downward patting motion accompanied by muffled urges to get on the throttle.

We’re not yet going as fast as I dare, but already I’m impressed with the noticeable amount of grip the control Dunlop tyres provide. The road-going car sits on narrow, skittish tyres that add to the 86’s default, tail-happy charm; the race ones stick like hot glue. 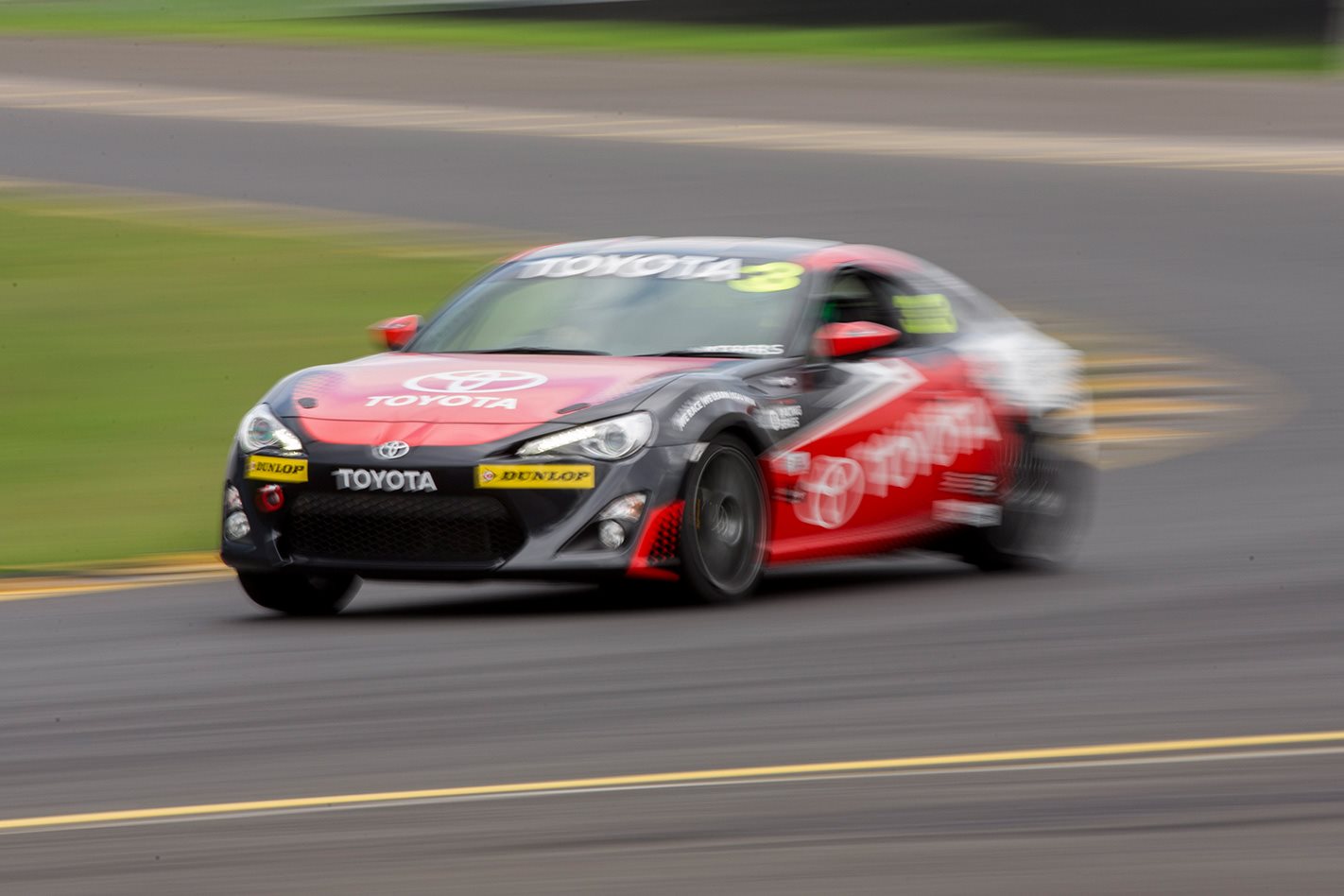 Strapped tight into the race bucket, I can feel every lump and bump of the circuit. Standing beside it, the track’s surface looks billiard-table smooth, but with the race-taut suspension and extra rigidity, not to mention the direct steering, every element of the track is as readable as a book.

The track is very technical, mixing hairpins with elevation changes, heavy braking zones and complex corners that the good drivers need to knit together to get right. For a Project Cars-addicted amateur such as me, there’s a hell of a lot more going on in the real world.

Sighting lap in, it’s time for the hot one. I fire onto the main straight, but slowly enough to wind out third gear almost all the way to the limiter.

Turn one at SMP is fear-inducing. You barrel down the main straight hugging the far side of the track as the pits flash past, the fast left-hand sweeper approaching fast. I’d noticed the real drivers, practicing on-track earlier, waiting until they bounced through a mid-corner whump before rolling on more throttle, exhausts rasping.

I button off and jump on the race-spec brakes to wash off speed before turning in, expecting the seemingly crater-sized whump to unsettle the car. It doesn’t, although the 86 jumps like a stung cat on exit. Just like the drivers did, I throttle on, but instead of the engine sitting in the exhaust’s resonating high end I’m down in the quiet zone, which shouts that I lack courage and commitment.

Lack of balls noted, I’m trying to spin the engine out to 7500rpm before swapping gears, but I’m still short-shifting in response the almost schizophrenic change in the exhaust note that kicks in from about 5000rpm. I’m focussing more, though; Ben’s words are lost in the background noise, his hand gestures – still almost always to get on the throttle earlier – a peripheral distraction. 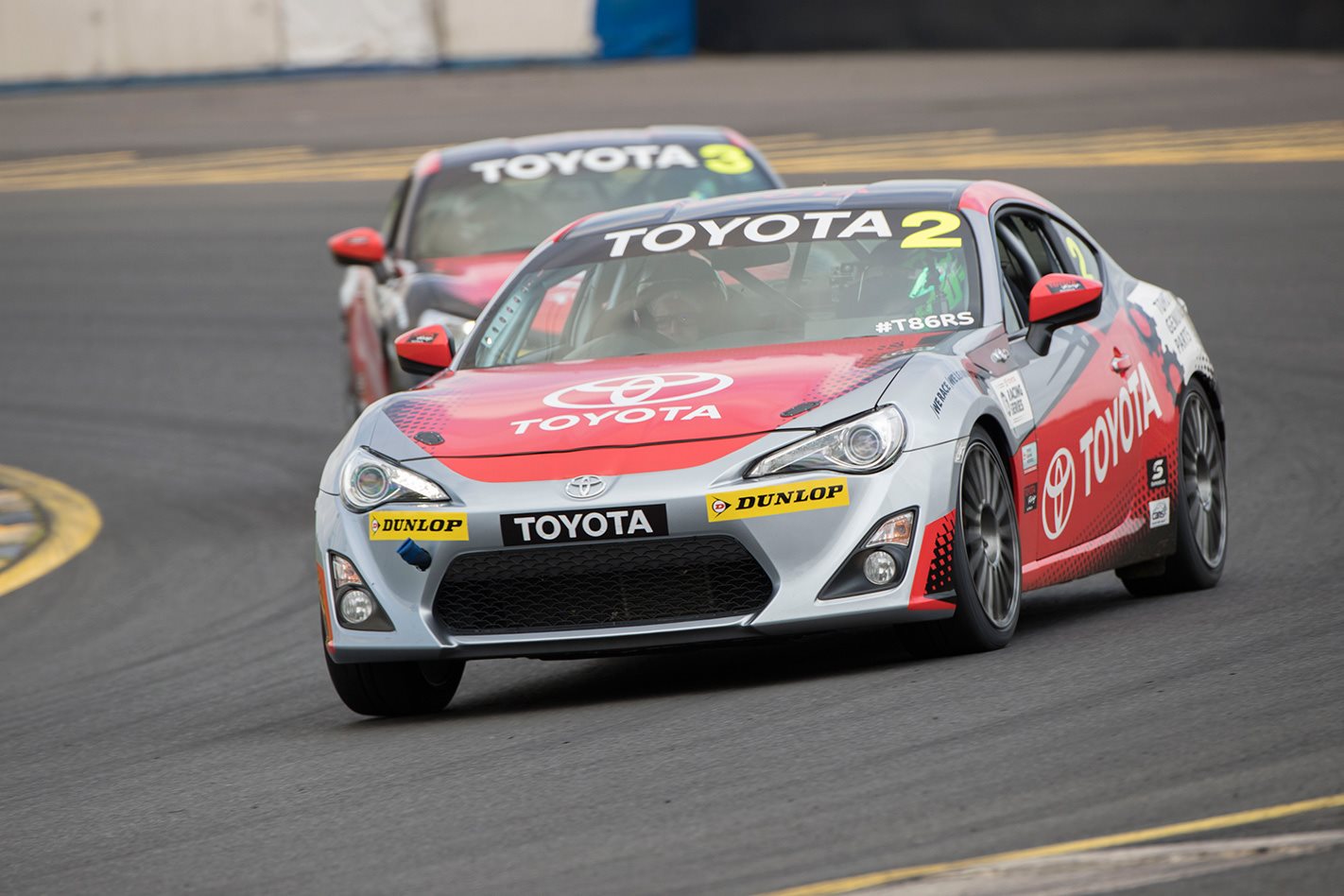 My focus catches me out at turn 11. Coming up to the crest, I lose all sense of where I am on the track, sitting in the centre. A sharp second-gear left-hand hairpin is just over the rise and I need to be kissing the concrete strip on the right as soon as I’ve crested. Ben’s hand flashes in my face urging me right, and I jump on the race-spec brakes, washing speed and trying to downshift as I aim for the outside. We make it around, although that’s the first of a few apexes that won’t be claimed as trophies today.

The rest of the lap is a blur, taking only what seems like seconds to complete. I sharpen up on my track position for the remaining corners, relying on the tyres’ lateral grip to hold the track. By the time I’m coming down the straight, I can snatch fourth gear about three-quarters the way along the pit wall. It’s a good feeling.

Ben’s chatting to me as we button off to do the cool-down lap, the one where I take the time to position the car and clip as many apexes as I can, and attempt my only semi-race speed heel-and-toe – which I surprise myself by nailing. I still don’t have a clue what he’s saying, but he’s animated. That’s a good thing, right?

We slow right down at turn 17, the entry to pit lane appearing. As we idle in, I suddenly notice how hot and cramped I am.

The Toyota 86 Racing Series office is a demanding one. I’m sweating hard in the heat and humidity of the cabin, not helped by the hammer of a sweltering Sydney day beating down on the unlined roof. My helmet is constantly rattling around on the ribs of the roll cage, and my hips feel like they’re being compressed in a vice.

I’m glad to climb out, levering myself over the roll cage as I ungracefully drag the rest of my body out from behind the wheel. I’ve just done three gentle loops and feel as though I’ve just had five rounds with George Foreman wearing a pair of his grills instead of boxing gloves, yet the real drivers will spend much of today banging out lap after lap at full race pace in helmets, race suits, gloves and boots.

That’s what Mark Skaife, at Sydney Motorsport Park yesterday to rev up the young drivers, likes about the one-make series.

“It’s a really well structured, important pathway category,” he says. “Last year it had some fantastic racing, and some real talent came out of it.” 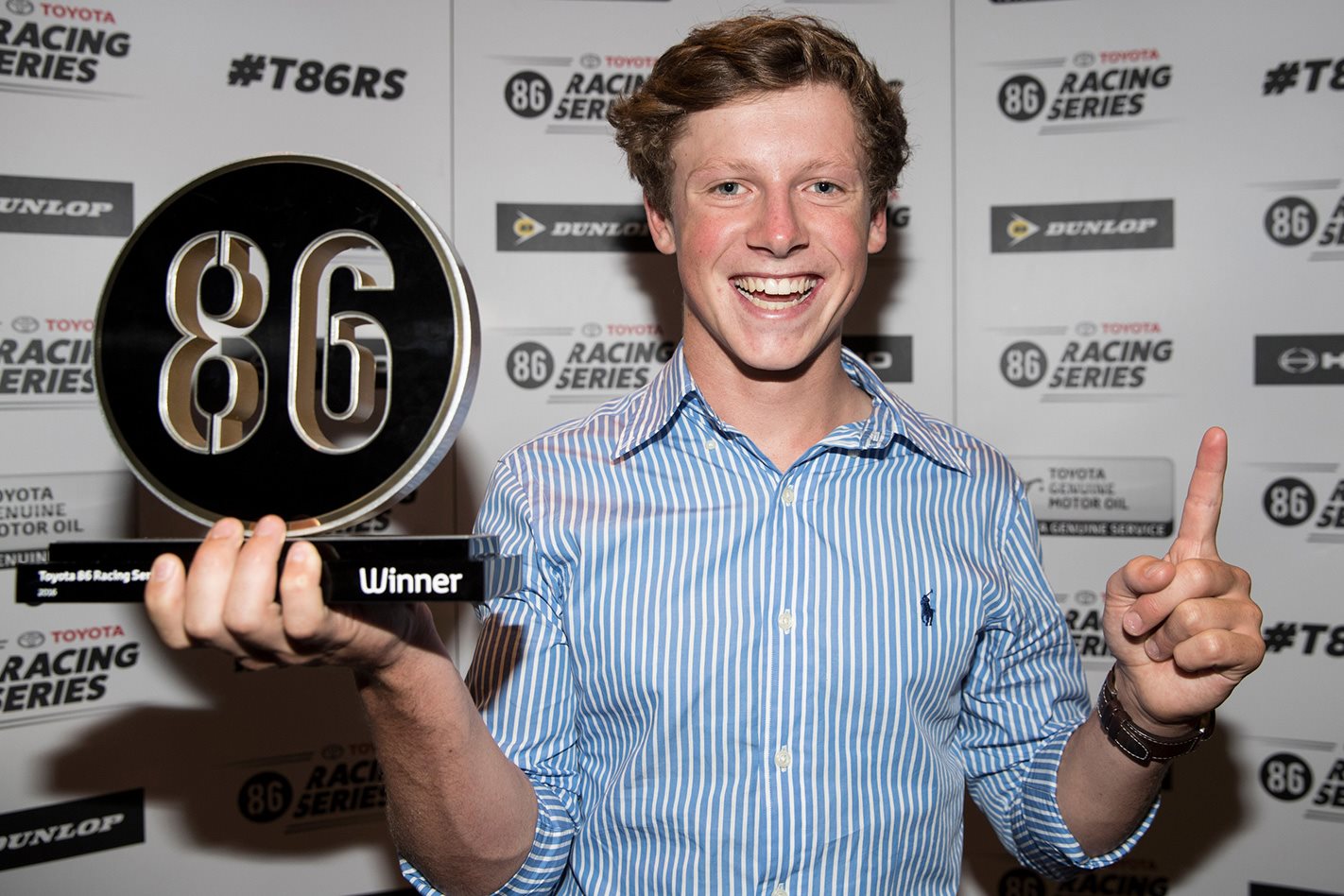 The most surprising was last year’s winner, Will Brown. He’s now been talent-spotted for a Super2 drive, the feeding ground for the top-tier Supercars series.

This year’s field could bump up past the 36 cars that took to the grid last year to number more than 40 – we won’t know until the list of entries are finalised this month.

Once you’ve paid around $100,000 for the car, the competition costs $1500 a round, and some teams have capped consumables – brake pads, tyres and the likes, and negating things such as mechanical failures and panel beating – to just $4500. That’s at the extreme end of cost-saving with a father-son team, though.

Prizemoney, at $125,000, is the same as last year, but the TV and online exposure for those who shine is invaluable.

This year, the Toyota 86 Racing Series will visit tracks at Phillip Island, Townsville, Sydney, Bathurst and the new street circuit at Newcastle.