Ford has put in some useful midseason training, but will it frighten Holden’s horses? Mike McCarthy is poised for a photo finish…

Regardless of what capitalists and economic rationalists espouse, gladiatorial competition isn't necessarily A Good Thing for the competitors and/or the market.

But even doves who don't endorse the sanctity of rampant market forces must agree that the Holden v Ford duel is a classic instance of cars and consumers benefiting when major players lock horns.

There's certainly no lack of intensity in the current contest. While it mightn't have the epic scale of a full model change, the EL Falcon is Ford's pointed reply to Holden's mid-year Commodore VSII upgrade. Mild though they may seem at a glance, the changes are crucial in keeping models competitive between major overhauls.

So where now does Falcon sit in relation to Commodore? 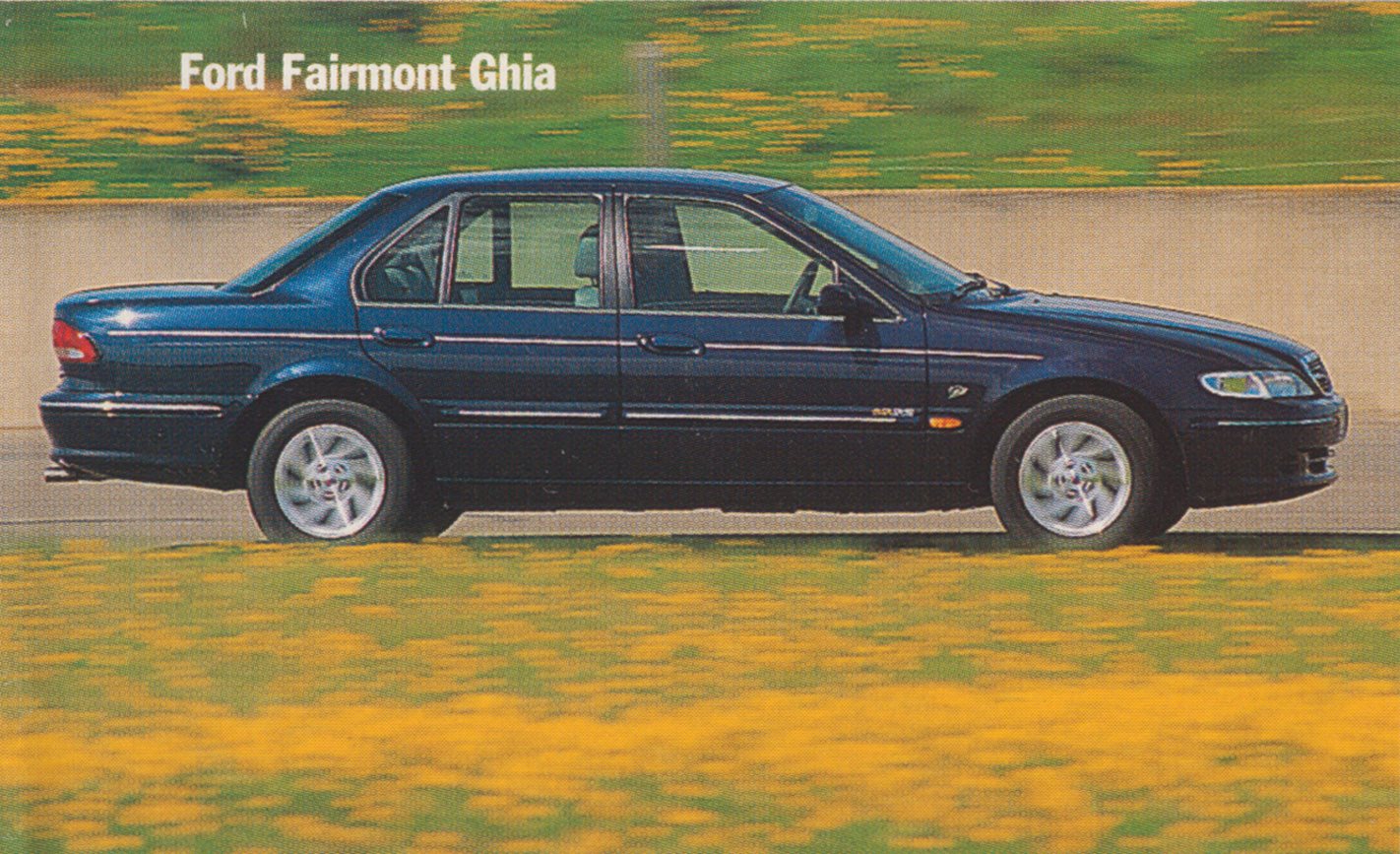 The answers came from a hard day's drive outside Adelaide's criss-crossing the city, lapping the local raceway (AIR), then out through the hills to loop back along the southern coast. In the blue corner is a Fairmont Ghia; in the red, a Calais. Though Ford's four-litre in-line six has only 200cm more capacity than Holden's V6, it maxes at 157kW and 357Nm, meaning better power and torque than the 147kW, 304Nm Calais. However the Ford is a substantially bigger car in all respects; with extra wheelbase, length and width and weight. Their electronically controlled four-speed autos share power/economy dual mode facility. A limited-slip cliff is standard in the Fairmont Ghia, optional for Calais.

They both perform pretty well, and there's very little between them in regular driving; just a few tenths of a second from 0-100km/h, for instance. In spite of carrying more mass and pushing more air aside, the Ford has the quicker full-bore acceleration from standstill and rolling starts, not by much but enough to draw clear. However, due to unchanged driveline constraints, the automatic Fords' top speed is still governed to 180km/h whereas the Holden could rush through the Northern Territory, say, at 200.

For the Calais, less wind resistance and weight pays off in superior economy. 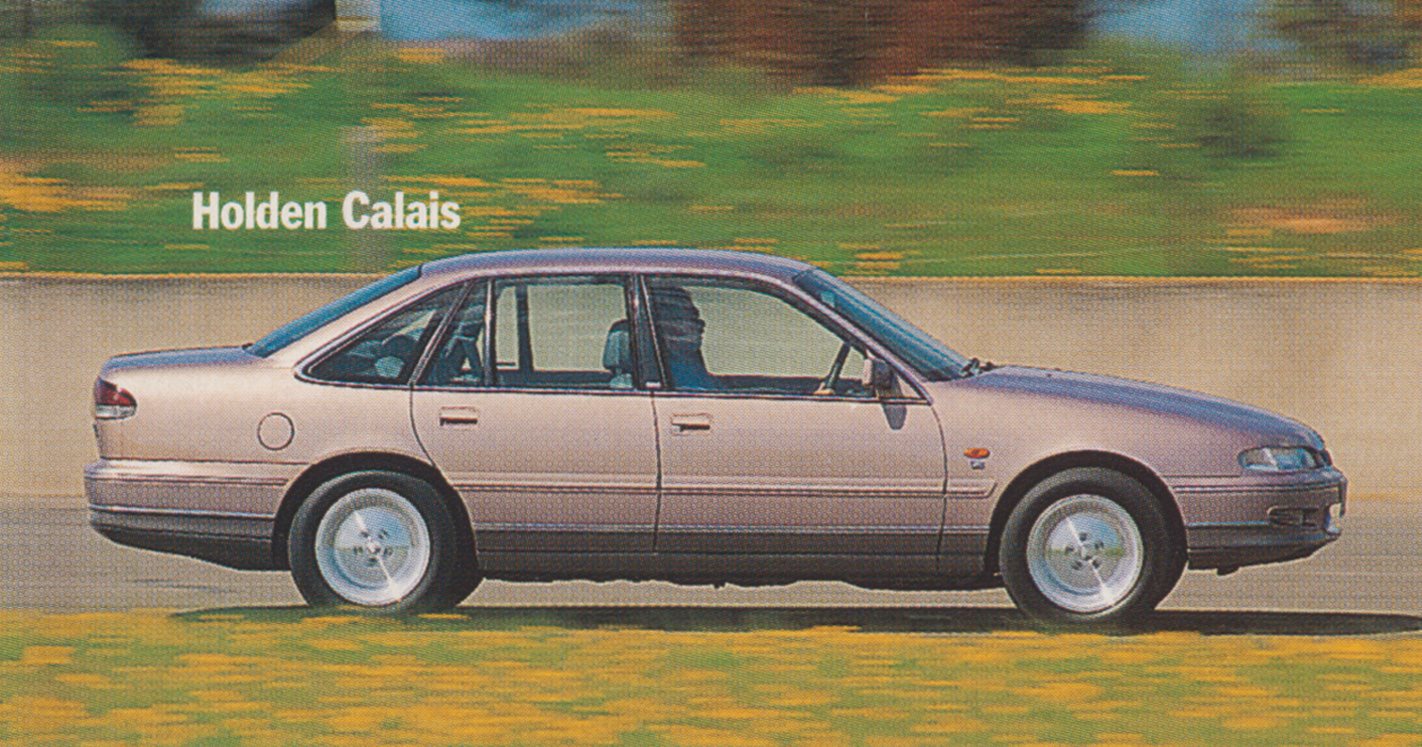 According to AS2877 test results, the Calais uses  11.5 L/100km for the city cycle and a thrifty 7.2 L/100km for the highway cycle. Under the same test regime, the Fairmont Ghia is credited with 13.0 and 8.0 L/100km respectively. But their cruising ranges are about similar, as the Ghia takes 68 litres and the Calais only 59.

It's not only from the outside that the Ford is the bigger of the two. The disparity shows on the inside too, because the Ghia's cabin has more room all round.

On the road, you very soon find that differences exist as much in the driving as in the dimensions. Ride and handling bring constant reminders of the Ghia' s extra size and mass. Not the steering, though. Unlike lower-line ELs, the Ghia sedan gets speed-sensitive power assistance which makes for light parking. Indeed it is a little too easy for our taste, and remains a touch remote at speed. Though the Calais also has speed-sensitive variable assistance, its wheel is the more firmly weighted at all speeds and generally gives a better sense of connection with the road. 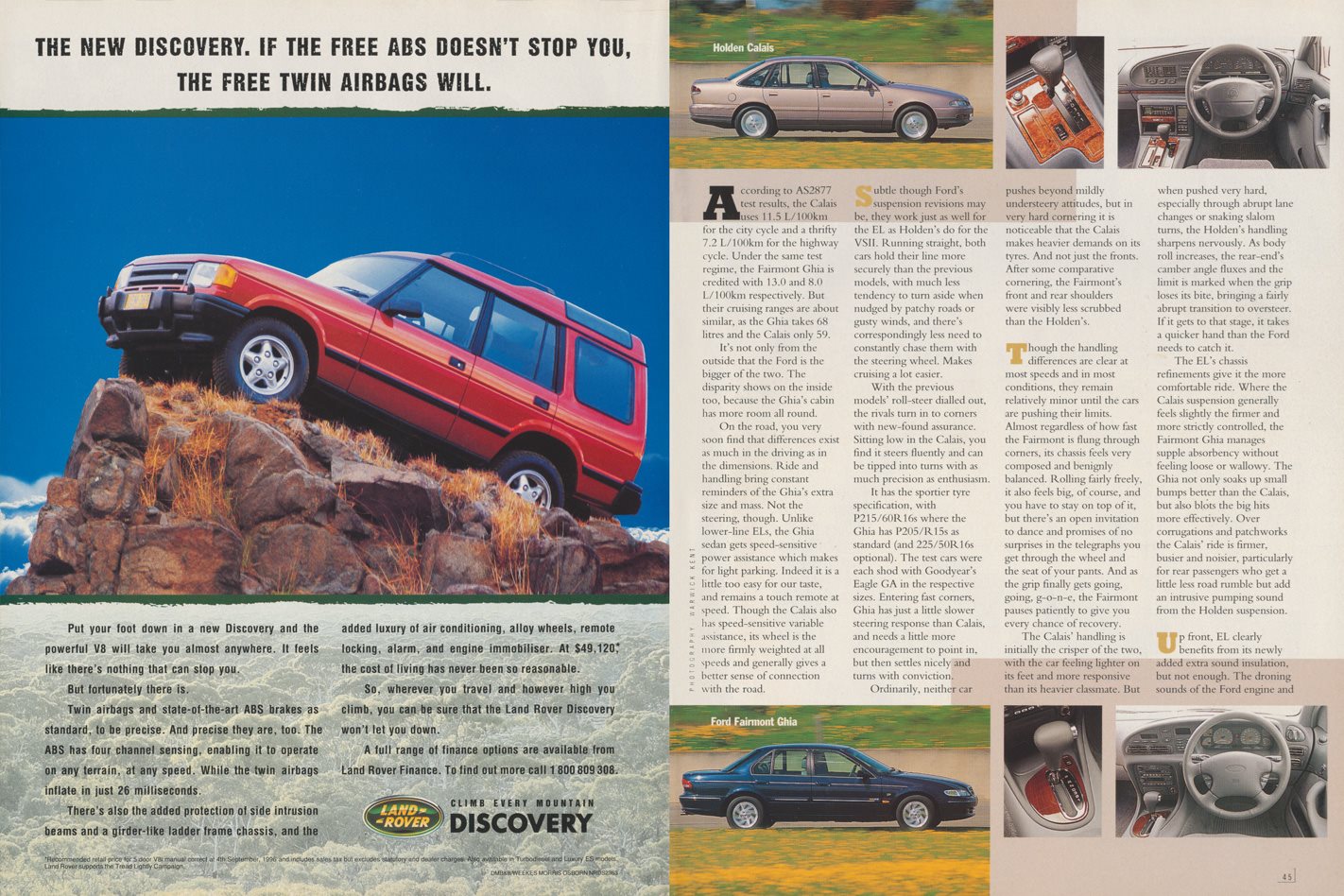 Subtle though Ford's suspension revisions may be, they work just as well for the EL as Holden's do for the VSII. Running straight, both cars hold their line more securely than the previous models, with much less tendency to turn aside when nudged by patchy roads or gusty winds, and there's correspondingly less need to constantly chase them with the steering wheel. Makes cruising a lot easier.

With the previous models' roll-steer dialled out, the rivals turn in to corners with new-found assurance. Sitting low in the Calais, you find it steers fluently and can be tipped into turns with as much precision as enthusiasm.

It has the sportier tyre specification, with P215/60R16s where the Ghia has P205/R15s as standard (and 225/SOR16s optional). The test cars were each shod with Goodyear's Eagle GA in the respective sizes. Entering fast corners, Ghia has just a little slower steering response than Calais, and needs a little more encouragement to point in, but then settles nicely and turns with conviction. 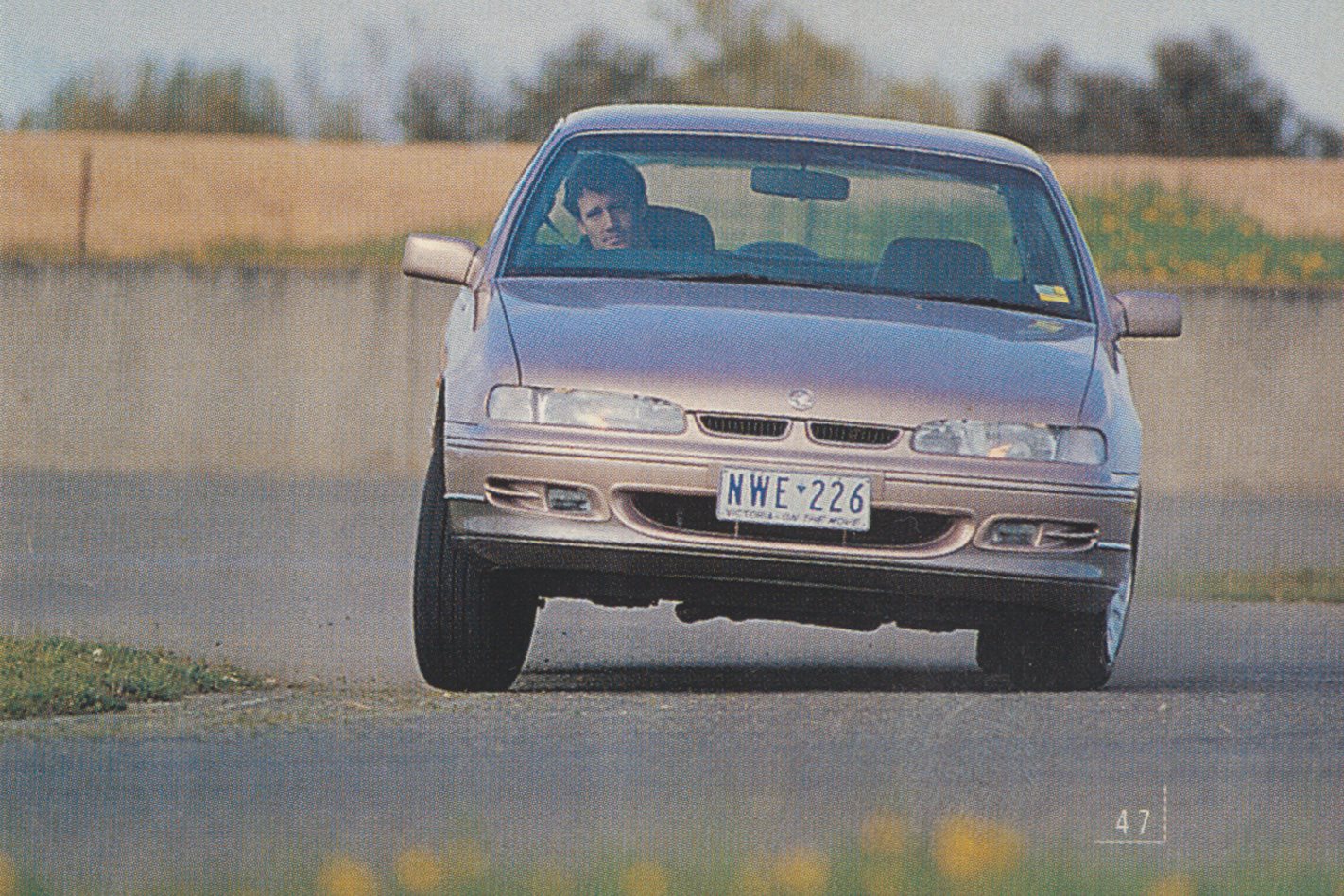 Ordinarily, neither car pushes beyond mildly understeery attitudes, but in very hard cornering it is noticeable that the Calais makes heavier demands on its tyres. And not just the fronts.

After some comparative cornering, the Fairmont' s front and rear shoulders were visibly less scrubbed than the Holden's.

Though the handling differences are clear at most speeds and in most conditions, they remain relatively minor until the cars are pushing their limits. Almost regardless of how fast the Fairmont is flung through corners, its chassis feels very composed and benignly balanced. Rolling fairly freely, it also feels big, of course, and you have to stay on top of it, but there's an open invitation to dance and promises of no surprises in the telegraphs you get through the wheel and the seat of your pants. And as the grip finally gets going, going, g-o-n-e, the Fairmont pauses patiently to give you every chance of recovery. 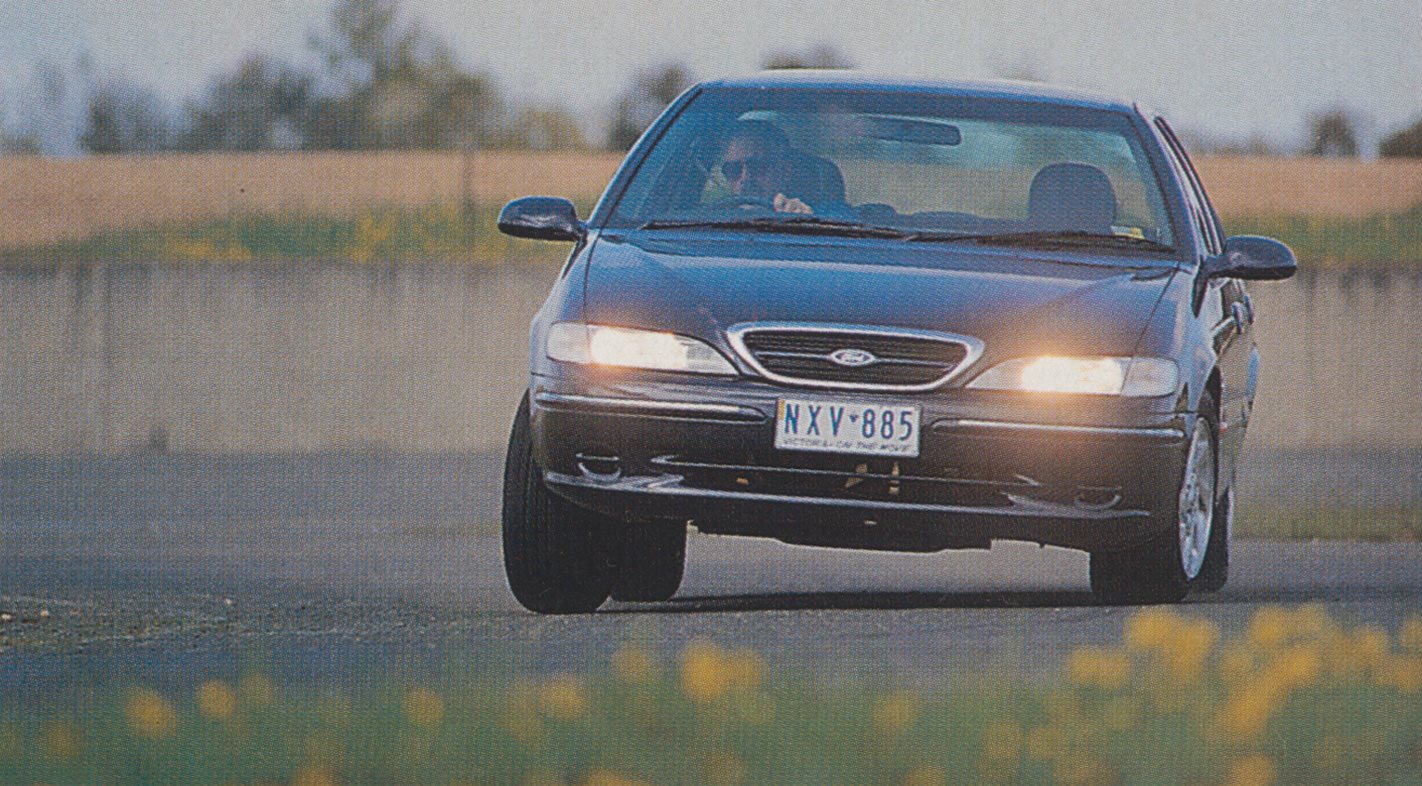 The Calais' handling is initially the crisper of the two, with the car feeling lighter on its feet and more responsive than its heavier classmate. But when pushed very hard, especially through abrupt lane changes or snaking slalom turns, the Holden's handling sharpens nervously. As body roll increases, the rear-end's camber angle fluxes and the limit is marked when the grip loses its bite, bringing a fairly abrupt transition to oversteer. If it gets to that stage, it takes a quicker hand than the Ford needs to catch it.

The EL's chassis refinements give it the more comfortable ride. Where the Calais suspension generally feels slightly the firmer and more strictly controlled, the Fairmont Ghia manages supple absorbency without feeling loose or wallowy. The Ghia not only soaks up small bumps better than the Calais, but also blots the big hits more effectively. Over corrugations and patchworks the Calais' ride is firmer, busier and noisier, particularly for rear passengers who get a little less road rumble but add an intrusive pumping sound from the Holden suspension.

Up front, EL clearly benefits from its newly added extra sound insulation, but not enough. The droning sounds of the Ford engine and wheezy transmission are slightly dimmed but as agricultural as ever. It's still far louder and coarser than the Holden drivetrain which is perceptibly quieter, smoother and always feels several degrees more refined.

Judging by our drive, braking consistency is a plus for the Calais. Four-wheel discs and sophisticated antilock systems are standard on both models, and very powerful braking is the rule in normal driving. However the Ghia's pedal travel softened and lengthened under the duress of repeated hard slowdowns, and the Calais proved much better settled and more directionally stable when braking urgently over bumps and into corners.

In back to back runs over the same very varied stretch of winding road, the Fairmont Ghia's rear seat got the thumbs-up from our passengers. The Calais isn't cramped by any means but the Ghia has more room in every direction and a more comfortable, more supportive bench as well. You tend to sit on, rather than in, the Calais cushion which also gets marked down for its raked backrest angle, non-adjustable headrests and poorly placed door armrest.

When it comes to arm-wrestling, the Ford wins hands down. Even if you can get your hand through the Holden's squeezy door grip, the mould parting-line's rough burr is dissuasive. Same for the front doors grips.

Even though the VS II Commodore interior was freshened only months ago, the EL update keeps the Ford at generation ahead in styling harmony and looks. It works better too. For example, the Ghia driver gets cushion height and tilt adjustments, the Calais height only. Where Holden's front seats have simple lumbar adjustment, Ford lumbar system now moves vertically as well as in/out. Standard trim is leather in Fairmont Ghia, velour in Calais. The test Calais had the optional leather facings, which are quite classy except for the obvious difference in the vinyl back panels' grain.

Indeed it's difficult to find any two different areas of the Calais interior with the same grain finish, let alone the same colour.

Throughout the Ghia's interior, the trim and tones are well matched. The Calais cabin has never looked better, but is still uncoordinated. The Ford's integration and modernity reflect a cohesive team effort. The use of polished woodgrain is revealing: it's complementary in the Ghia, almost an afterthought in the Calais. 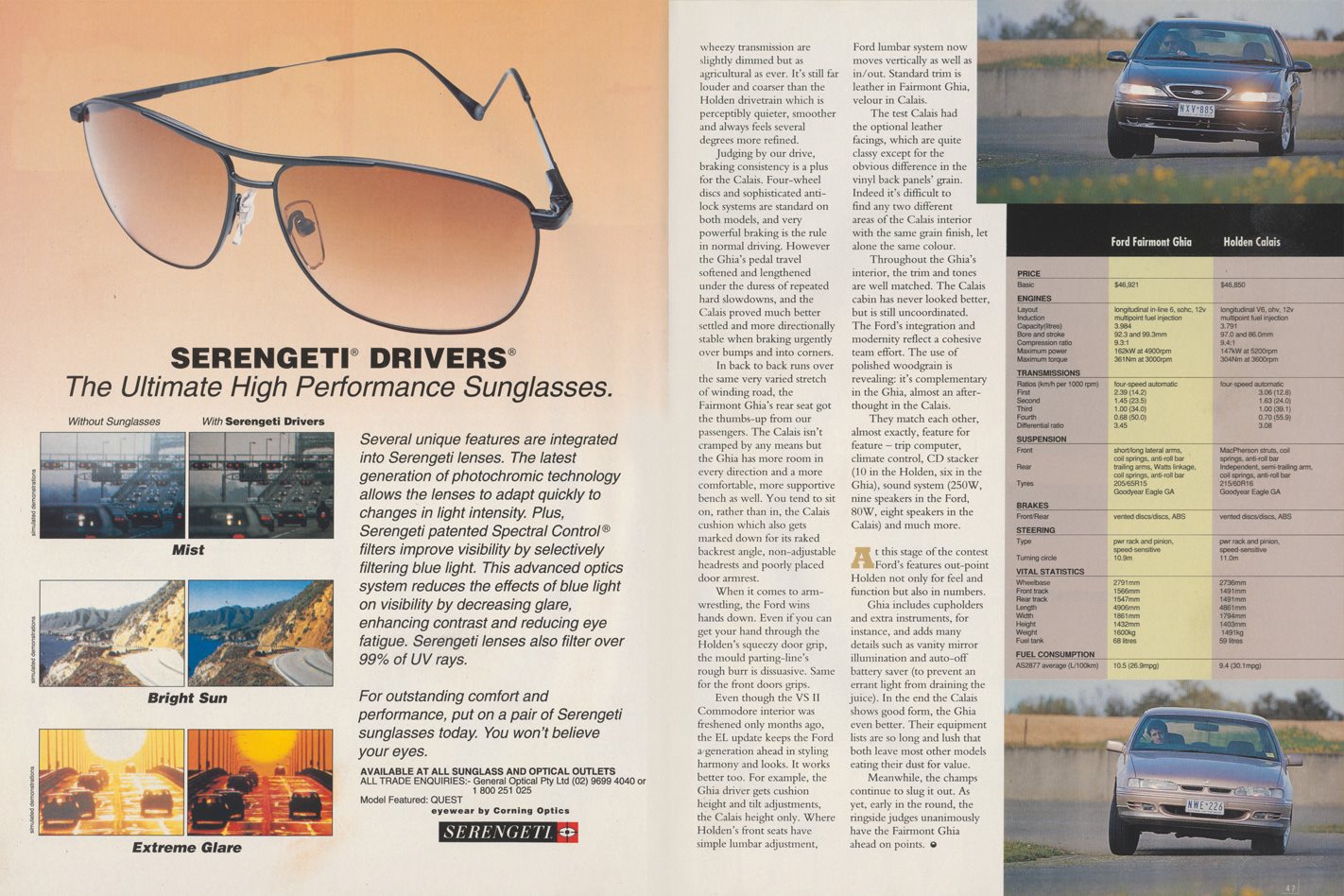 They match each other, almost exactly, feature for feature- trip computer, climate control, CD stacker (10 in the Holden, six in the Ghia), sound system (250W, nine speakers in the Ford, 80W, eight speakers in the Calais) and much more.

At this stage of the contest Ford's features out-point Holden not only for feel and function but also in numbers. Ghia includes cupholders and extra instruments, for instance, and adds many details such as vanity mirror illumination and auto-off battery saver (to prevent an errant light from draining the juice). In the end the Calais shows good form, the Ghia even better. Their equipment lists are so long and lush that both leave most other models eating their dust for value.

Meanwhile, the champs continue to slug it out. As yet, early in the round, the ringside judges unanimously have the Fairmont Ghia ahead on points. 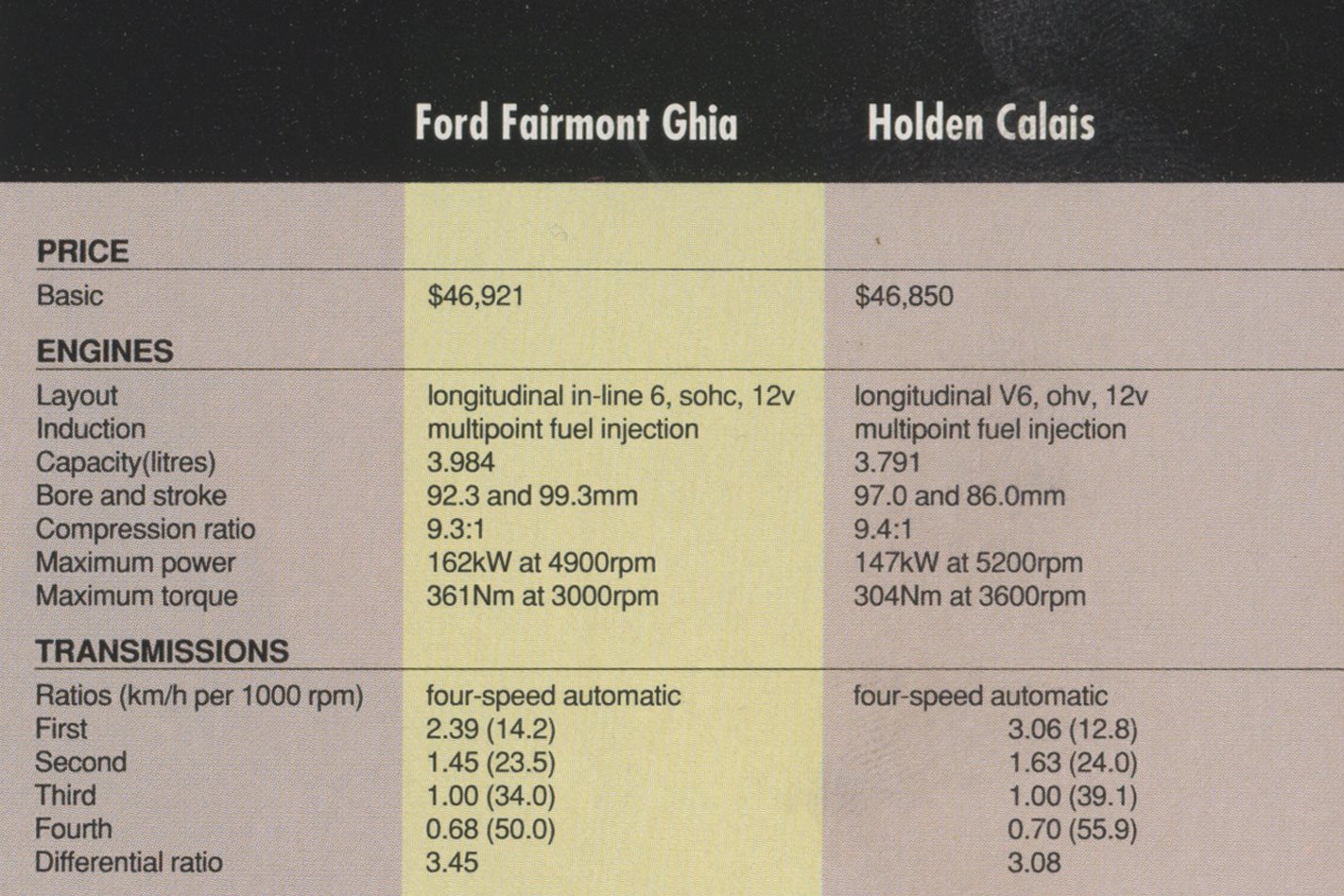