At last, a tweaked chassis, more equipment and less noise makes Falcon the car it should have been from the start. Bob Hall gives EF II the thumbs up.

There's no question last year's Ford EF Falcon was a giant leap forward for Ford in terms of styling, refinement and quality. But in the pressure cooker of Car of the Year judging it fell just a fraction short of the mark.

Not only did the EF run into some pretty tough competition, but there were niggling doubts among most of the judges over its twitchy handling.

To the shock and dismay of all those at Broadmeadows, COTY '94 went to Subaru's Liberty instead.

To its credit, Ford took our criticisms seriously. We spent a warm mid-February day at the You Yangs proving ground evaluating a number of EFs in the company of senior Ford engineers. While no one actually conceded there was anything amiss with the EF's suspension tune at the time, it's clear they did plenty of listening. Just fourteen months after the EF Falcon stormed onto the Australian market, Ford has released EF II. And significant suspension upgrades were among the 1000-odd changes wrought in the $18m makeover.

The most extensive of these is a rework of the front suspension which first appeared on the Fairlane Ghia and LTD a few months back. Taller spindles have raised the ball joint location by 3mm, while toe-in has been reduced by 1mm.

Firmer lower A-arm inner bushings have been fitted and the stabiliser bar diameter increased by 1mm with bushes to suit.

In addition, the power assisted steering has been tweaked to improve feel.

The result? A Falcon with the same sort of sure-footed composure as a live-axle Commodore. No more twitchiness, no more nervous roll oversteer, no more hyperactive turn-in response.

Ford has got it right. At last.

Only the most eagle-eyed of bird-watchers will spot the exterior changes. On the GLi and Futura, the model series badge work at the rear has forsaken frosted silver finish for the lustrous, prestige-packed luxury of plastichrome. Mmmm! 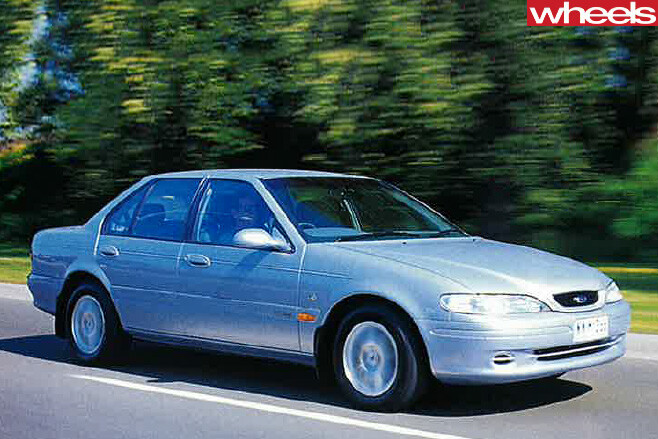 Those ever-popular wagon versions of the GLi and Futura also add a silver applique to the tailgate (which, by the way, now opens 50mm higher and includes a pull-down handle) possibly obtained through after-hours pilferage of the Fairmont parts bin.

Nine-spoke wheel covers on the GLi are new and the Futura's bodyside moulding insert is given a more prominent section.

There's also an 'ABS' logo at the base of the rear window on cars so equipped (everything but a GLi, and if the ABS option is bought, the logo is included at no additional charge. Swell, huh?).

All cars from the GLi to the long wheelbase LTD get a convex left-hand door mirror with that US lawyer-frustrating inscription “objects in mirror are closer than they appear”.

The latest Fairmont, in Ghia form, is slightly easier to spot than the two Ford Falcons. There's a chrome moulding surrounding the dummy grille, bodyside pinstripes and the grey finish between the spokes of the aluminium wheels is now a brighter silver, 'Ghia' nameplates subbing for the Ghia logos previously seen on the front guards (and appearing alongside the rear Fairmont badge).

The B-pillar has a black finish applique and the engine designation is now on the bodyside moulding insert on V8s as well as sixes. The '4.0i' legend is now satin gold instead of grey.

All models are now available with a passenger airbag. It's a reasonable $510 option on all Falcons and the Fairmont, standard on Fairmont Ghia, Fairlane Ghia and LTD.

The big (150-litre) bag has a distinct shape Ford calls 'keyhole', designed to provide a degree of protection to centre passengers on GLis fitted with the no-cost centrefold front seat option. 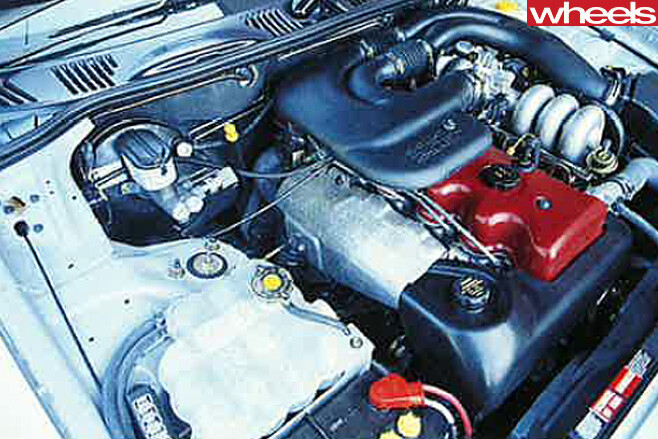 To address comments about seating, the front seat tracks of all Falcons, Fairmonts, XRs, Fairlanes and LTDs have been lengthened by 25mm and the cushion has been recontoured to improve headroom and side support. This has reduced the feeling that you sit on a Falcon, rather than in it.

Ford engineers have also been aggressive in their efforts to control noise. Door seal rubbers have been redesigned for better control of wind noise, particularly in the A-pillar area. Further acoustic control comes from the addition of Orbseal inserts.

First used by Ford on the imminent Taurus, Orbseal is a neoprene-based foam which expands from 400 to 1000 percent when the car is run through the cathodic paint process. It swells to fill hollow areas of the body structure, blocking potential resonance paths and improving the body's sound absorption.

Additional suspension upgrades are a large part of the new Fairmont Ghia, the closest thing to an all-new model in the EF II series. Recently overshadowed by the Fairlane Ghia in the eyes and wallets of the buying public, Ford has refocussed – some might say it without the prefix – the top spec, short wheelbase model to give it a stronger image. In an interesting way, mind you.

Relying upon the keystone of the punchy XR6 engine developed by the wizards at Tickford Vehicle Engineering, Ford has managed to produce a fascinating composite, highlighting the best performance aspects of the faster-than-an-eight six allied to the sort of comforts you’d expect from a top-line local six.

In the process, they've also managed to imbue the car with more character than a Calais.

Using the XR6 engine as a starting point, Ford fits a laminated sump and a specific exhaust, tuned to be a little more mellow than the extrovert XR6, but  maintains everything else as on the volcanic XR, Tickford winged 'T' logotype notwithstanding. Power output dips from the donor car's impressive levels, but not by much.

You can have any transmission you want, provided it's a four-speed automatic, coupled to the six. The automatic box is, in fact, the same one fitted to the XR6, and the 3.45:1 final drive ratio (rather than the 3.23:1 used with the regular Fairmont and six-cylinder automatic Falcon GLis and Futuras) is shared with the XR6 auto.

The Fairmont now fits a limited-slip differential as standard.

Time prevented us from taking any performance figures, but a series of impromptu back-to-back runs with a baseline automatic GLi showed the Tickford-improved Fairmont Ghia would move out more smartly than the standard Falcon under any circumstances.

Ford's claiming a 0-to-100km/h time of 8.4sec for this king of Fairmonts. Our seat of the pants-ometer tells us they're in the ballpark.

The price of performance must be paid and there are no prizes for guessing that the preferred currency is dinosaur squeezings. Crackling fresh AS2877 numbers show the Fairmont Ghia's 13.0L/l00km city and 8.0 L/100km figures to be 4.0 and 5.3 percent worse than the base Fairmont's 12.5 and 7.6 fuel economy numbers.

Against the 5.0-litre V8, the situation reverses itself.

The Fairmont Ghia's 'enhanced' six handily trumps the optional (though we don't know why anyone would order it) bent eight's 14.5L/100km city and 9.0L/100km urban thirst. Cheers!

Suspension for the Fairmont Ghia has 10 percent higher rate springs up front, improved rebound control in gas shocks all round. It has been lowered 10mm up front, 15mm in the rear – and yes, you can see the difference.

Of course, the Fairmont Ghia gets some interior tweaks and upgrades, too. Full leather upholstery (previously a $1113 option) is now standard and the previously standard velour/leather combo is now a no-cost option. ‘Cappuccino’ interior trim has been 'imported' from the Fairlane/L TD.

A six-disc CD stacker is now factory-fitted in the boot to level the playing field with Calais, with chrome metal door handles culled from the Fairlane/LTD. But the passenger airbag means the dead tree applique on the dashboard is in the waste bin. There's still some on the doors, though.

None of this is going to come cheap, right? Well, the Fairmont Ghia's price has edged up exactly $510 to $45,340. Not bad considering the increase is equal to the price of the passenger bag option on Falcons or the base Fairmont, but the leather, CD changer and limited-slip rear end would have added another $2500 above 'last year's model'. It's also $356 less than a Calais, which must have been another object of the exercise.

It would appear Ford has not been greedy, even if the rest of the range isn't being treated as well as the Fairmont Ghia. Futura, base Fairmont and XR6/8 prices are unchanged. Base GLi is up $148 for the sedan, $157 for the wagon while Fairlane Ghia and LTD prices are also up $510, but without extra fruit.

With the VT Conm1odore more than a year away, the General's reaction is bound to be interesting. We're guessing there may be some buyer-pleasing special editions in the offing.