Warning: Holden's longest ever production contains material you may have seen before

WHAT you're looking at is two-thirds of a Statesman, a good portion of One Tonner, a small helping of Ute, and a dash of concept car.

With a single-digit gesture in the direction of political correctness, it's been named Crewman. This new lord of the Loading Zone is both the longest-ever Holden and Australia's first homemade, car-based, double-cab utility.

Only a few other manufacturers have ever attempted to build car-based double-cabs – Subaru's Outback-based Baja, on sale now in North America, is one of the handful – and no-one we can think of has ever done one anything like this with a V6 or V8 up front. 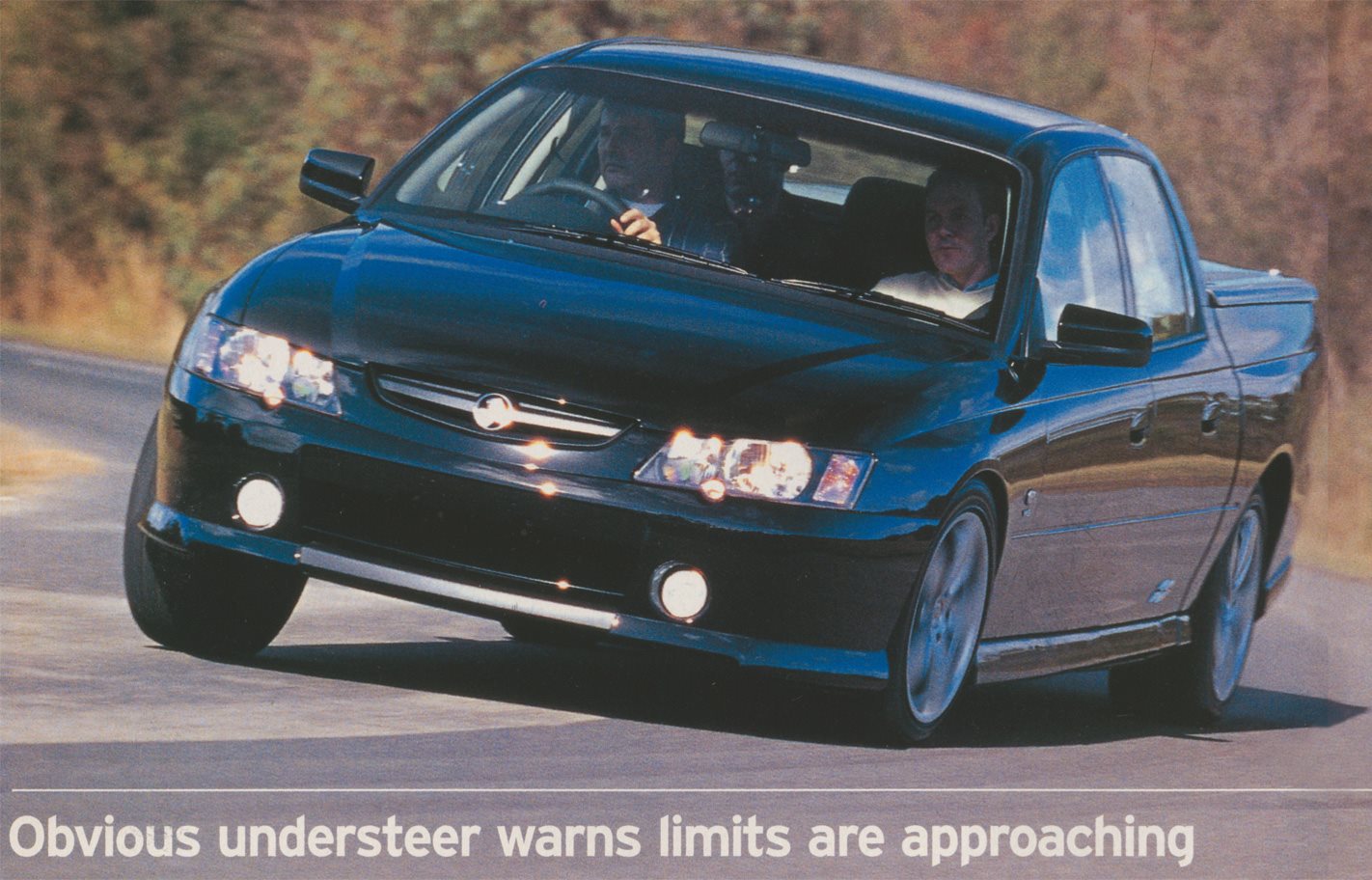 Holden's 5.3-metre-long Crewman is just the first of a trio of important new models the company will launch between now and November. There's an all-wheel-drive Crewman to come, plus the Commodore wagon-based Adventra that utilises the same drivetrain.

While both these will be V8 – only until the all-wheel-drive-friendly High Feature V6 from Holden's new engine factory comes on stream, the rear-drive Crewman doesn't have this problem. It arrives with the familiar, old, iron 3.8-litre V6 in the base and S models, with the SS, naturally, packing a 5.7-litre Gen III V8.

Because Australia has never seen anything like the Crewman, Holden's feel for its appeal must mostly be gut instinct. Around 8000 a year, or almost twice the number Monaro sold in its first full year on sale, they reckon. It's a substantial number and part of the reason Holden believes it will sell almost 30,000 Australian-made utes next year. As well as Crewman, this prediction includes One Tonner and Commodore Ute. 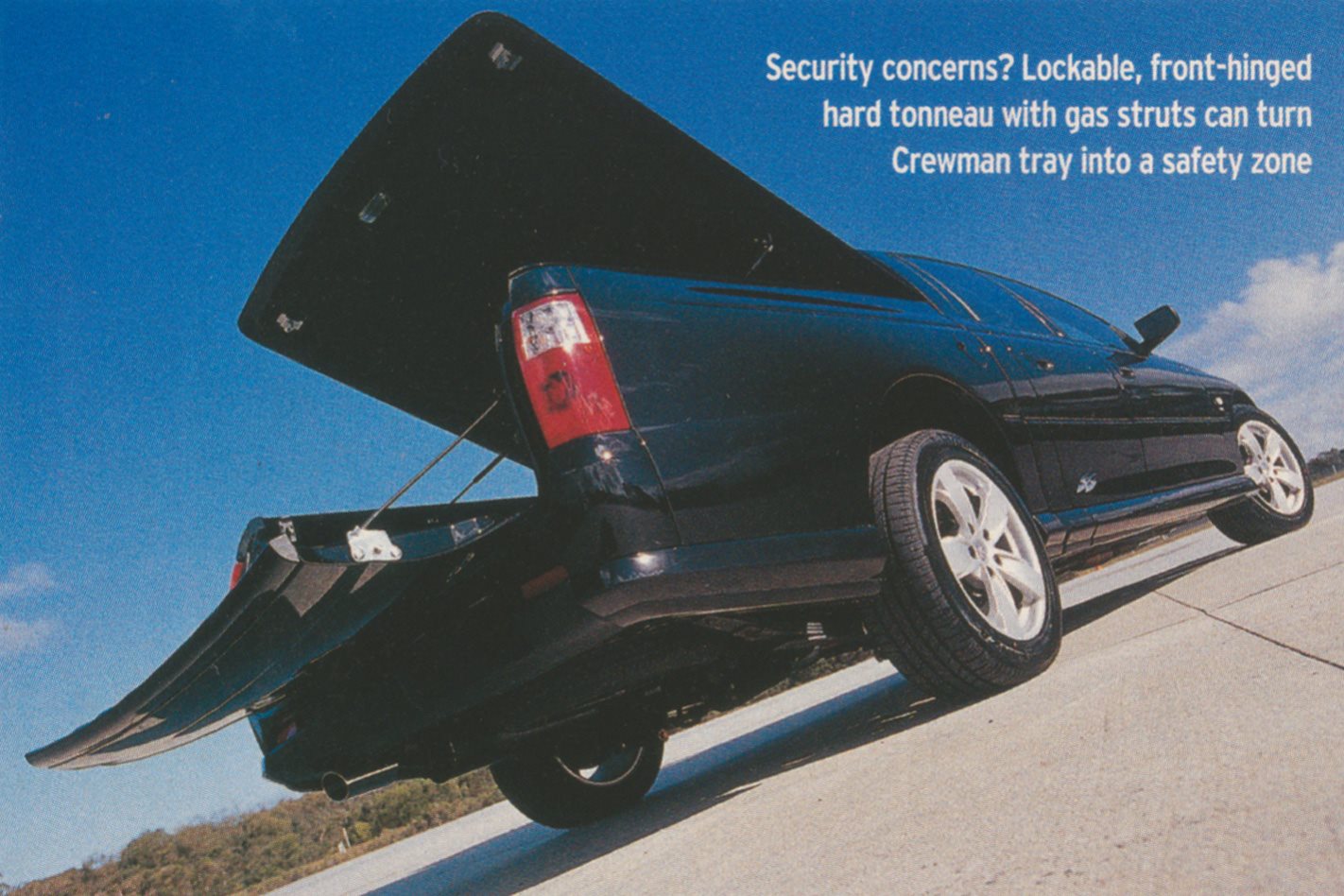 Crewman customers will choose it for a bunch of different reasons, according to marketing director John Elsworth. Everyone from Holden Ute loyalists who have sprouted a family, to tradesmen who are tired of imported, commercial-vehicle-based double-cabs, he says. Prices? The auto-only base and S are $32,490 and $38,740 respectively, while the SS is $46,140 in both six-speed manual and four-speed auto forms.

There's nothing remarkable about the Crewman's technical specification, especially the nostalgic live axle and semi-elliptic leaf-spring rear suspension. What is truly ingenious is the way the Crewman has been engineered. This ingenuity was born of the need to be thrifty. Holden spent a total of $130 million on the combined Crewman and One Tonner program. Crewman accounted for $60 million, and less than one-third of this amount was spent on engineering.

Pragmatic Holden prefers cleverness to costliness every time, as you will see... 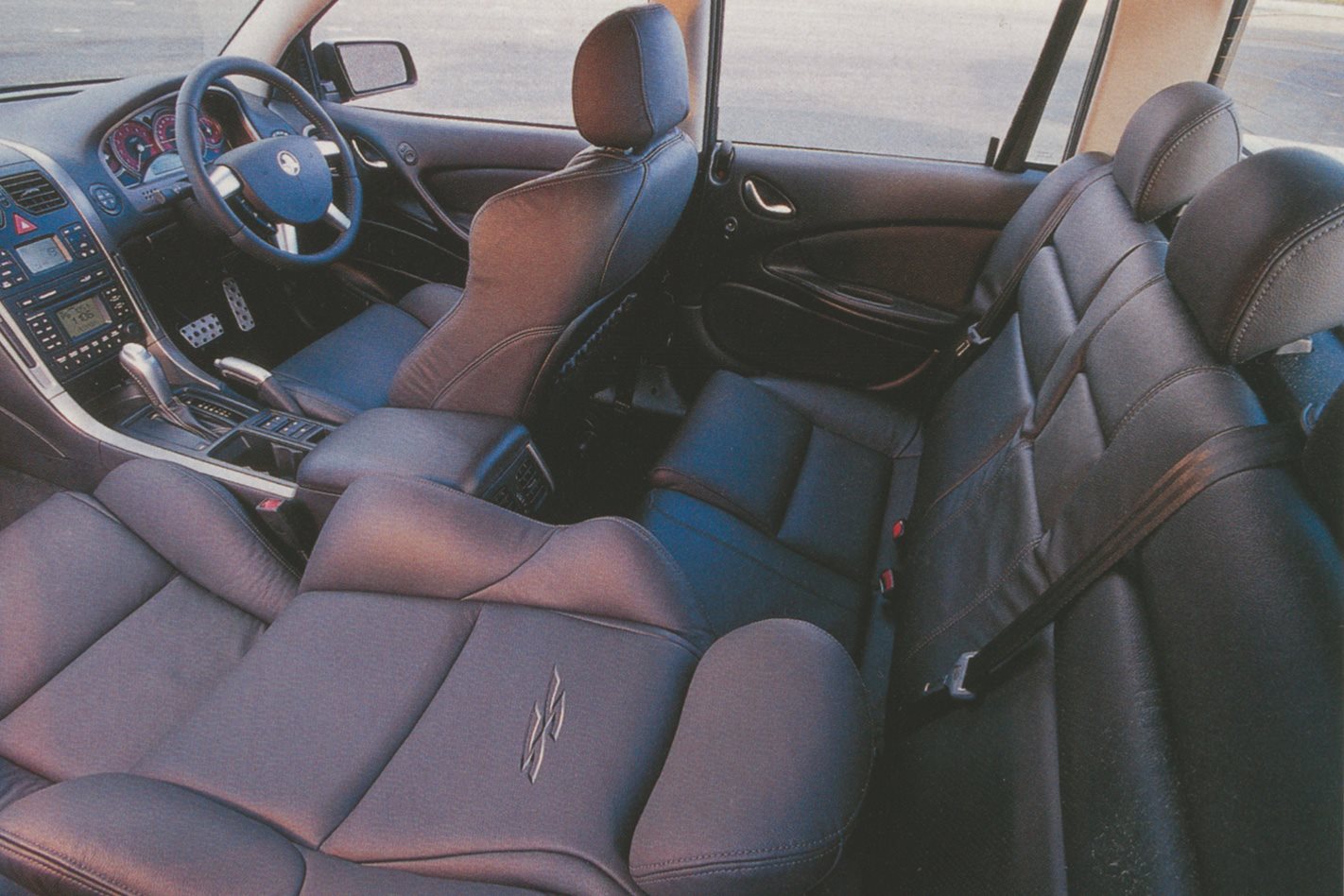 The passenger compartment is from Holden's long-wheelbase WK Statesman. Chosen because it delivered the rear seat headroom Crewman required, it's cut off just aft of the rear door window. Crewman's rear door inner structure and lift -glass are straight from WK, but the skin is obviously new. The cab's rear glass is the same as Ute and One Tonner.

Holden's engineers describe the Crewman body as a half monocoque, half chassis structure. Although it shares all important components, including fuel tank and axle, with the similar chassis of the One Tonner, the Crewman's is shorter. The dual applications were envisaged from the start, so the chassis was designed to have both long and short frame modules.

Naturally, the connection between cab and chassis has to be super strong. At the forward end of the chassis assembly are vertical, box-section posts. These help spread the load broadly across the rear section of the cab, to which the chassis is secured by 12 bolts. Holden calls it 'torque arm', a reference to the upright strengthening pillars concealed behind the rear seatback. 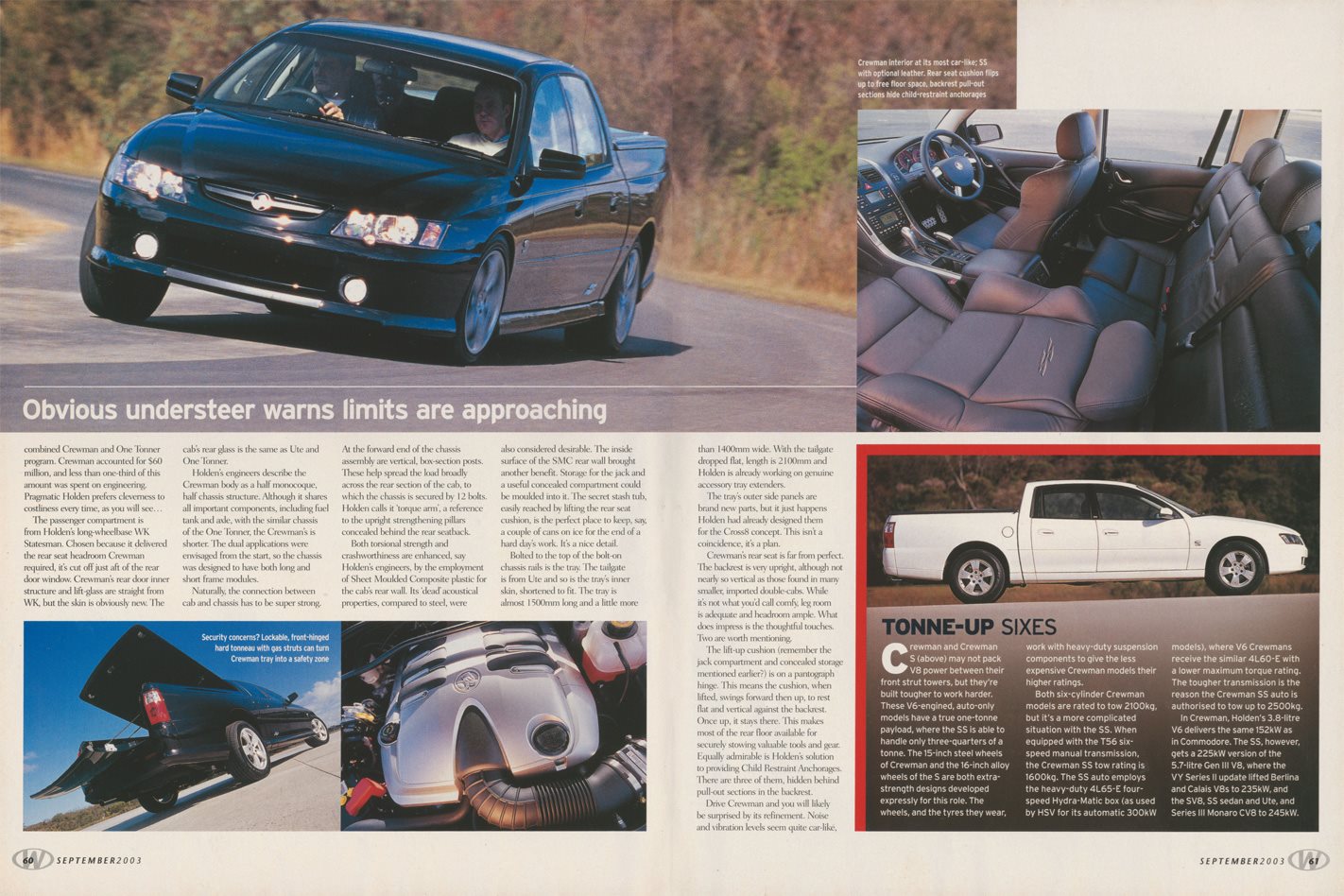 Both torsional strength and crashworthiness are enhanced, say Holden's engineers, by the employment of Sheet Moulded Composite plastic for the cab's rear wall. Its 'dead' acoustical properties, compared to steel, were also considered desirable. The inside surface of the SMC rear wall brought another benefit. Storage for the jack and a useful concealed compartment could be moulded into it. The secret stash tub, easily reached by lifting the rear seat cushion, is the perfect place to keep, say, a couple of cans on ice for the end of a hard day's work. It's a nice detail.

Bolted to the top of the bolt-on chassis rails is the tray. The tailgate is from Ute and so is the tray's inner skin, shortened to fit. The tray is almost 1500mm long and a little more than 1400mm wide. With the tailgate dropped flat, length is 2100mm and Holden is already working on genuine accessory tray extenders.

The tray's outer side panels are brand new parts, but it just happens Holden had already designed them for the Cross8 concept. This isn't a coincidence, it's a plan. 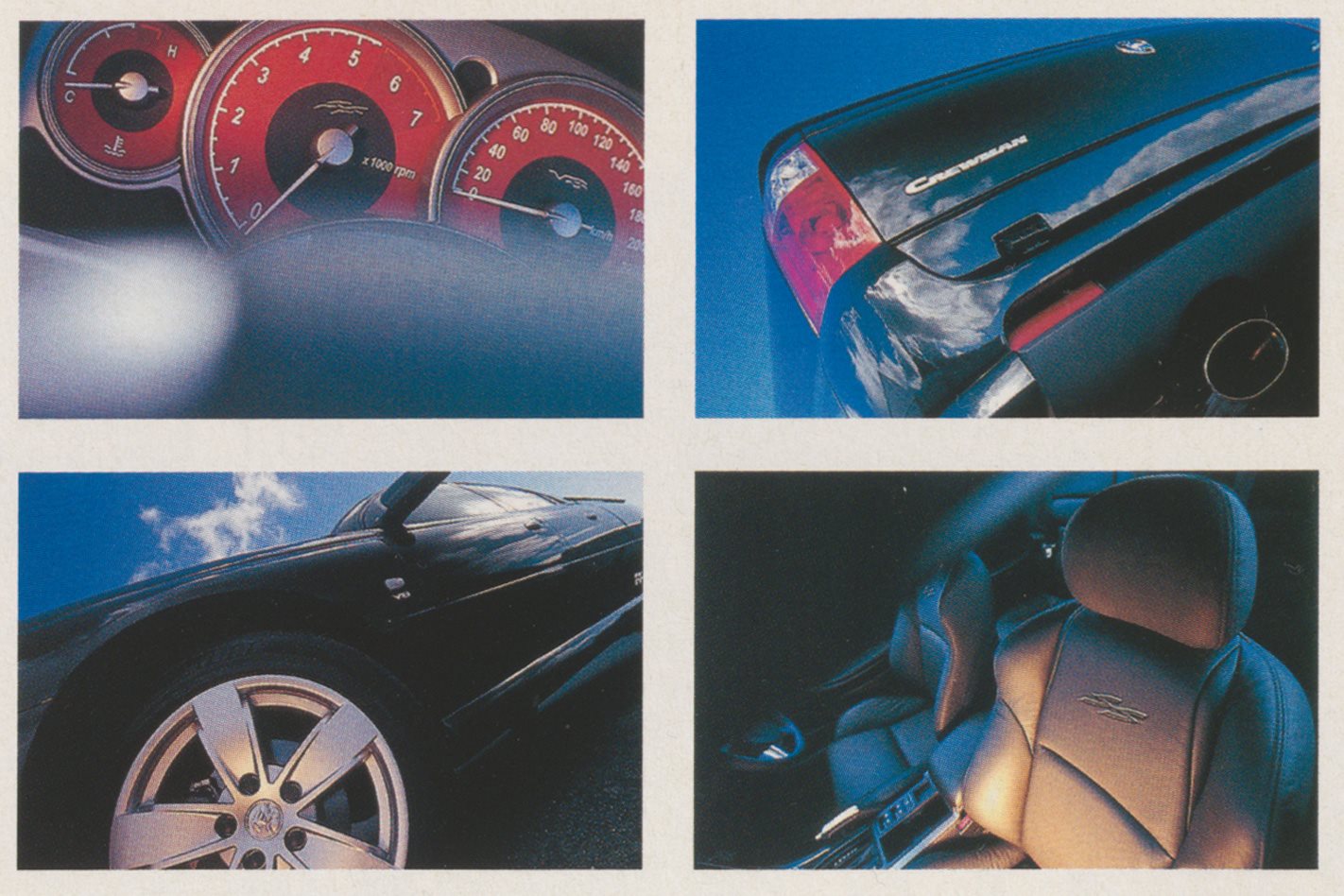 Crewman's rear seat is far from perfect. The backrest is very upright, although not nearly so vertical as those found in many smaller, imported double-cabs. While it's not what you'd call comfy, leg room is adequate and headroom ample. What does impress is the thoughtful touches.

Two are worth mentioning. The lift-up cushion (remember the jack compartment and concealed storage mentioned earlier?) is on a pantograph hinge. This means the cushion, when lifted, swings forward then up, to rest flat and vertical against the backrest.

Once up, it stays there. This makes most of the rear floor available for securely stowing valuable tools and gear. Equally admirable is Holden's solution to providing Child Restraint Anchorages. 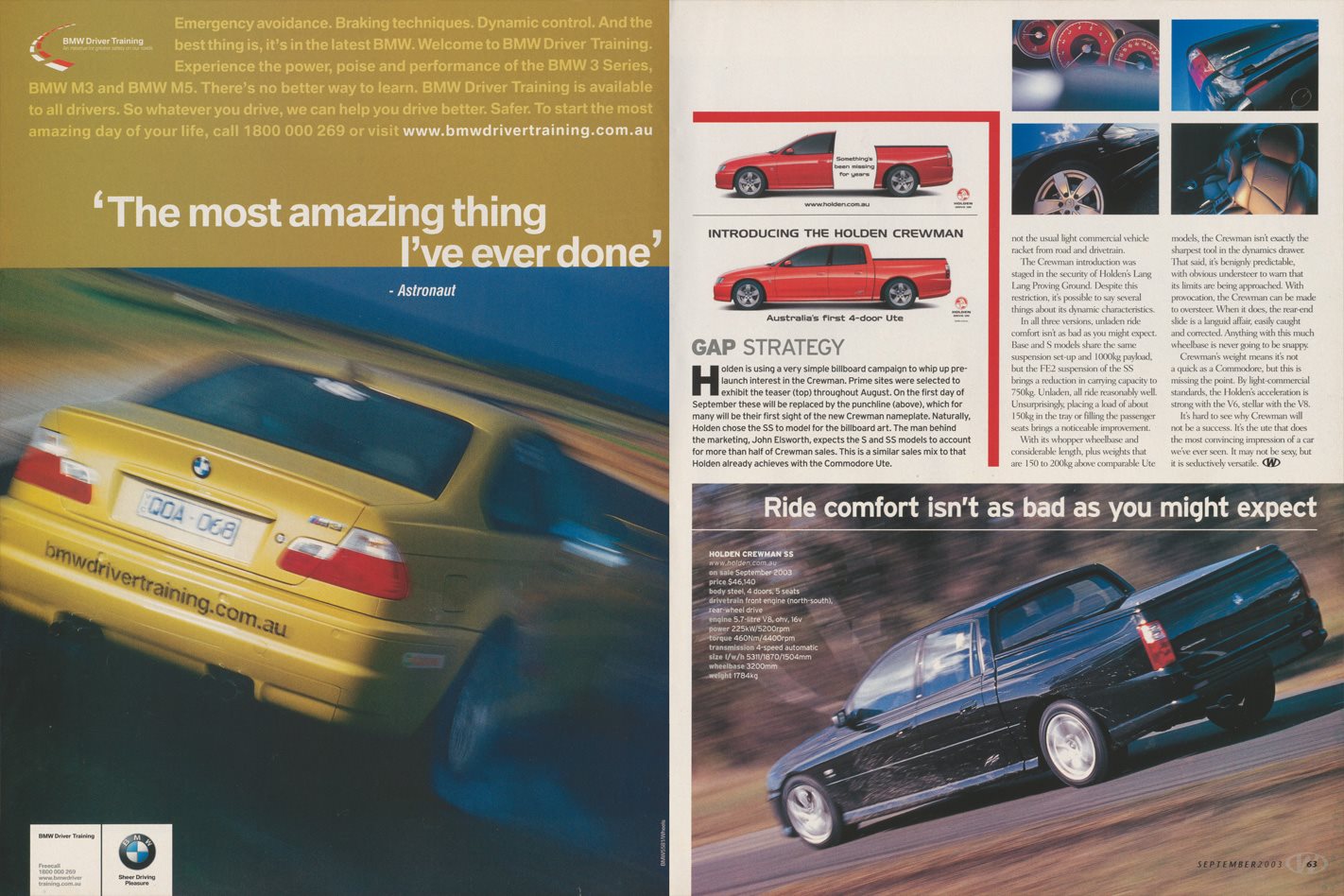 There are three of them, hidden behind pull-out sections in the backrest.

Drive Crewman and you will likely be surprised by its refinement. Noise and vibration levels seem quite car-like, not the usual light commercial vehicle racket from road and drivetrain.

The Crewman introduction was staged in the security of Holden's Lang Lang Proving Ground. Despite this restriction, it's possible to say several things about its dynamic characteristics. 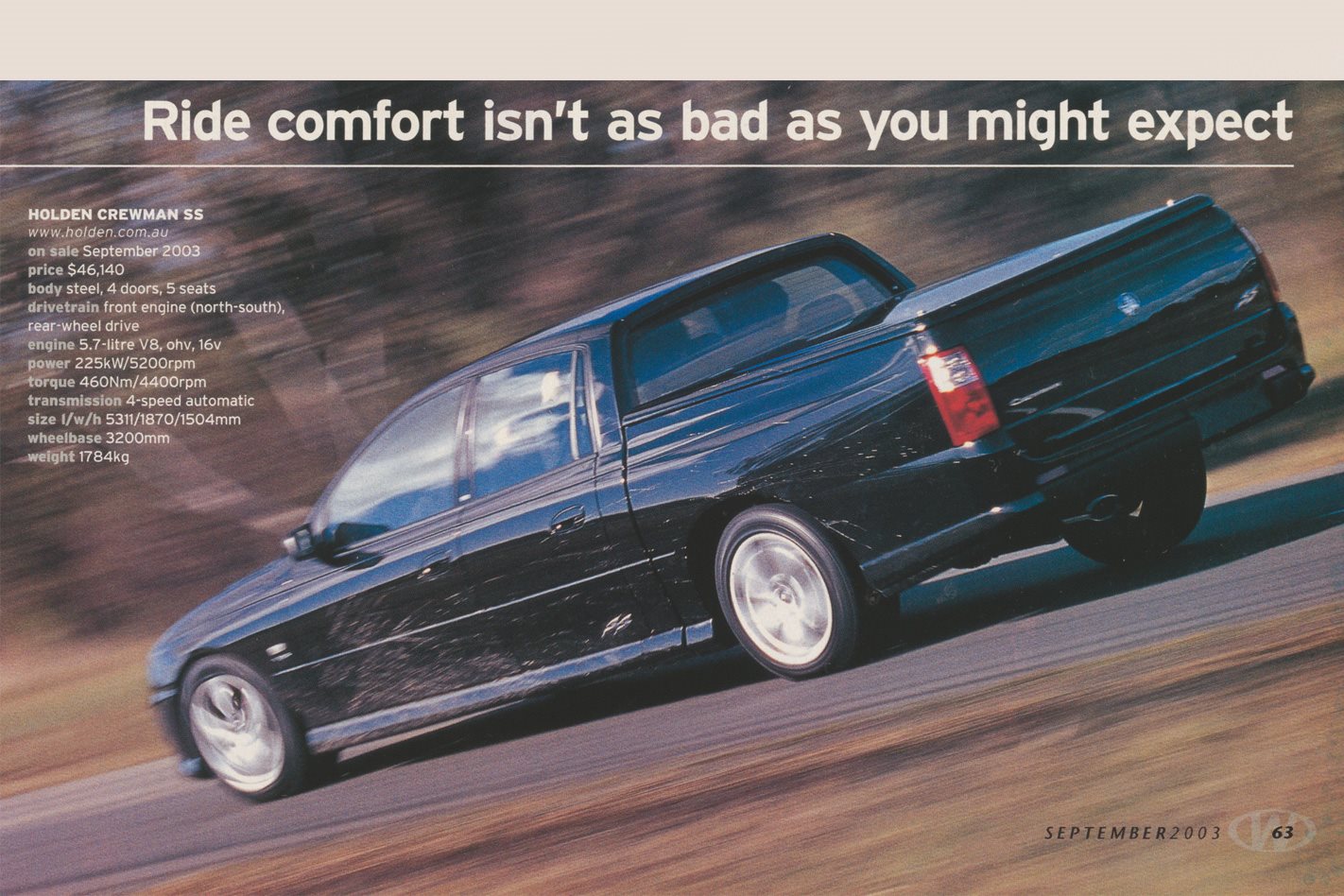 In all three versions, unladen ride comfort isn't as bad as you might expect. Base and S models share the same suspension set-up and 1000kg payload, but the FE2 suspension of the SS brings a reduction in carrying capacity to 750kg. Unladen, all ride reasonably well.

Unsurprisingly, placing a load of about 150kg in the tray or filling the passenger seats brings a noticeable improvement. With its whopper wheelbase and considerable length, plus weights that are 150 to 200kg above comparable Ute models, the Crewman isn't exactly the sharpest tool in the dynamics drawer.

That said, it's benignly predictable, with obvious understeer to warn that its limits are being approached. With provocation, the Crewman can be made to oversteer. When it does, the rear-end slide is a languid affair, easily caught and corrected. Anything with this much wheelbase is never going to be snappy. 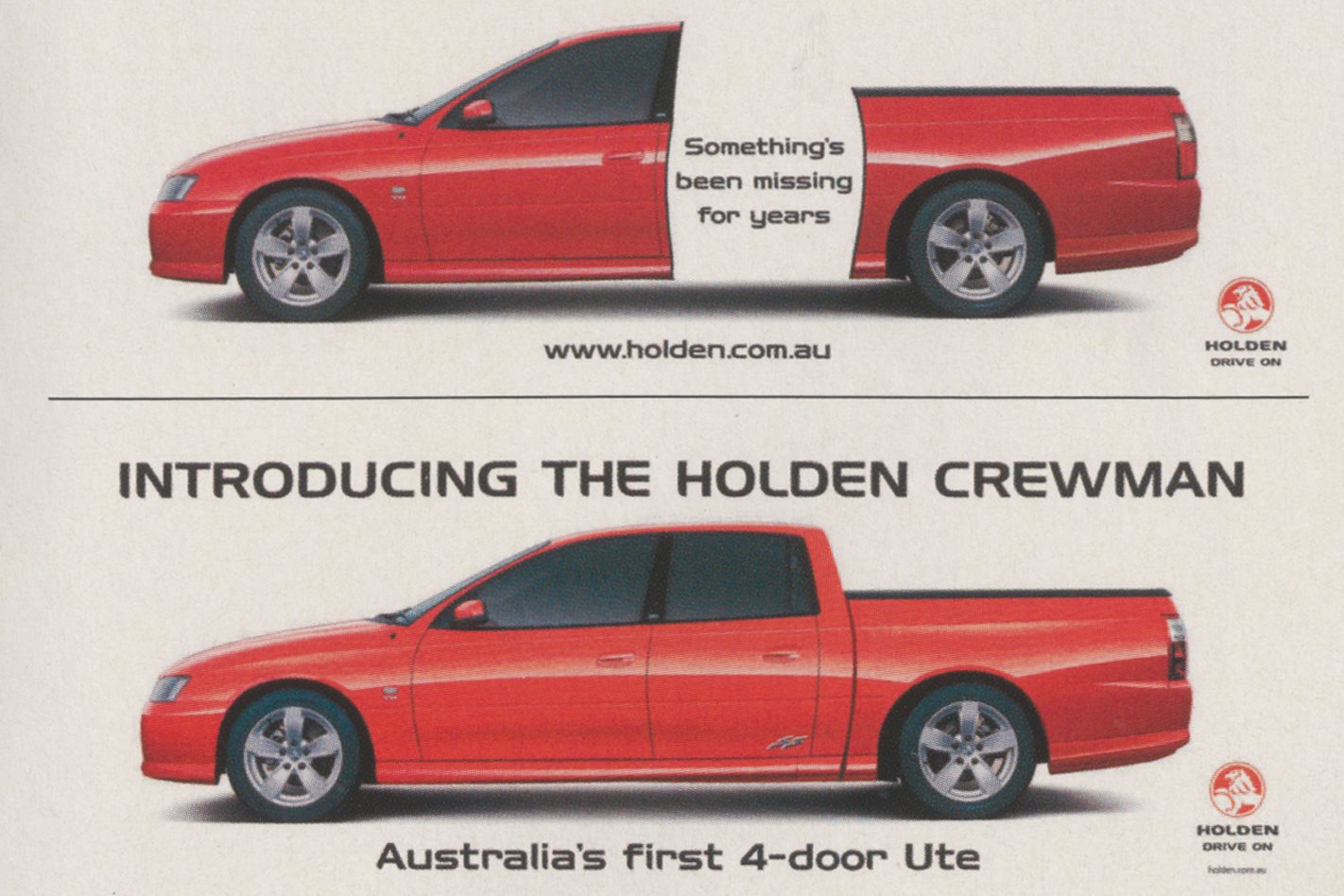 Crewman's weight means it's not a quick as a Commodore, but this is missing the point. By light-commercial standards, the Holden's acceleration is strong with the V6, stellar with the V8.

It's hard to see why Crewman will not be a success. It's the ute that does the most convincing impression of a car we've ever seen. It may not be sexy, but it is seductively versatile.