Keep it simple. Take a V8 cousin to the Corvette’s all-alloy donk, slide it between a VT Series II’s strut towers and voila! Meet the meat inside HSV’s wrapping.

It’s a seemingly simple left-into-right. A flick of the wrists, an easy-over shifting of weight from one pair of Z-rated tyres to the other, then away.

A one dimensional wiggle. But when you're about to turn-in at something approaching 140km/h, that first left rushes up much, much faster than you expect.
With the belt cinched tight, your left knee braced against the door trim and your right hand pushing down against the seat cushion, you can see past Mark Skaife's shoulder. From the back seat, you watch the speedo needle rise and fall, as Skaife loads then releases suspension and tyres. It never drops below 130km/h and is brushing past 160 as we run millimetre perfect to the edge of the bitumen exiting the right-hander. 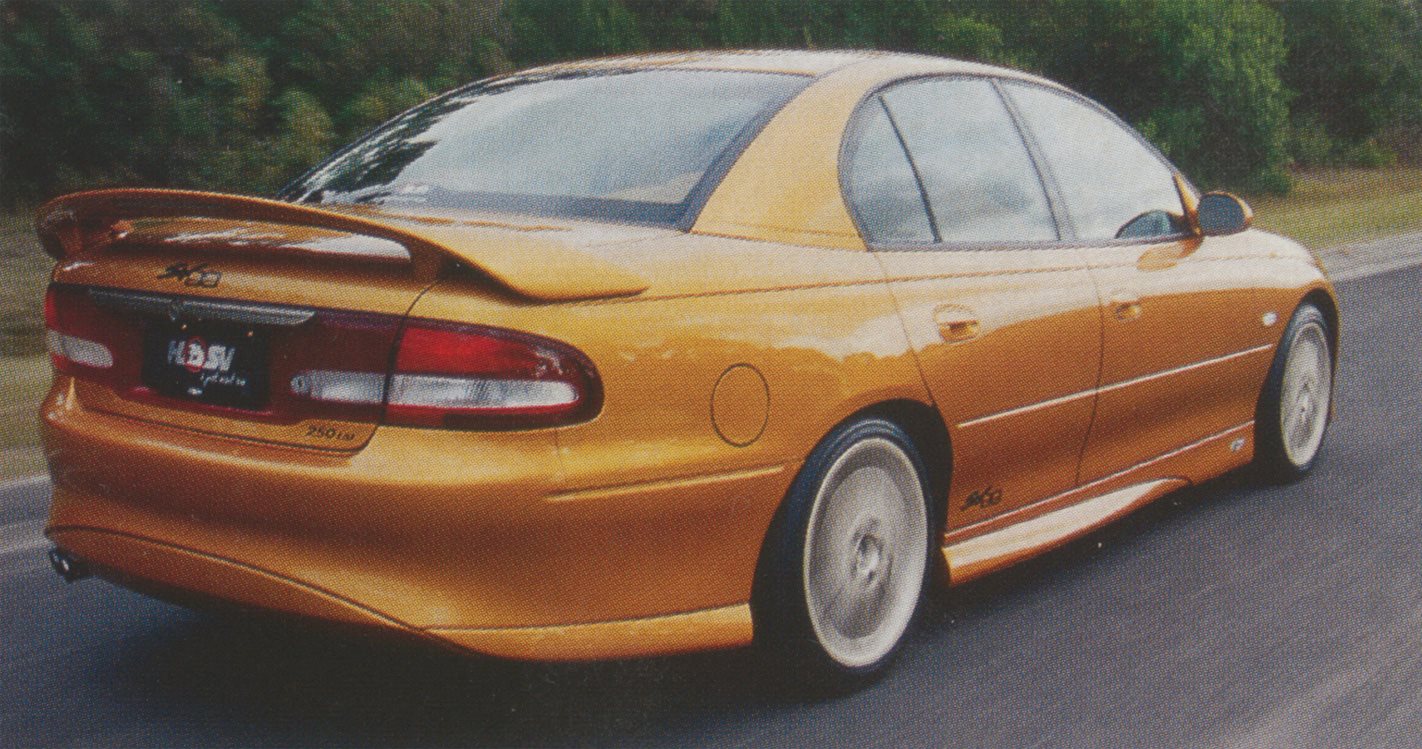 Holden Special Vehicles had come to Holden's Lang Lang Proving Ground to show what 250kW and 5.7 litres of American alloy can do -but it seems 18 inches ofBridgestone rubber can be just as powerful. In truth, the launch of HSV's muscle cars was a botched affair. Only the famously qualified Mr Skaife was allowed to drive, and even then in an unrepresentative VT Senator. And while that particular car had the right engine and performance suspension, it was obviously a well-used 'mule' car. The Series II Club Sport RS, SV99 and VTII Senator sitting on the skid pan over there were for photographic purposes only. All had been quickly dummied-up for the launch and weren't to be driven seriously.

None had a Chevrolet VS beneath the bonnet. It's just as well we had some time in an engineering prototype car some months ago ...

Don't go looking for a VT II HSV Manta - there isn't one. Hurt by Holden's runaway success with the better looking SS, HSV has dumped the entry level eight, leaving the supercharged XU6 ($51,990) to lead the charge. In order of price, the HSV range follows with Club Sport ($55,000), the enhanced Club Sport RS ($59,750), the SV99 pictured here ($76,450), Estate ($70,950), Senator Signature ($71,450) and the WH Grange ($7S,500). The VS Commodore-based Maloo continues, to be replaced next year when the Chev-engined VT II version comes on line. Why no GTS? HSV is offering just one engine at this point, meaning the Club Sport RS runs with the previously higher performing GTS. The famous badge will reappear in time for the Olympics with a rumoured 300kW engine. 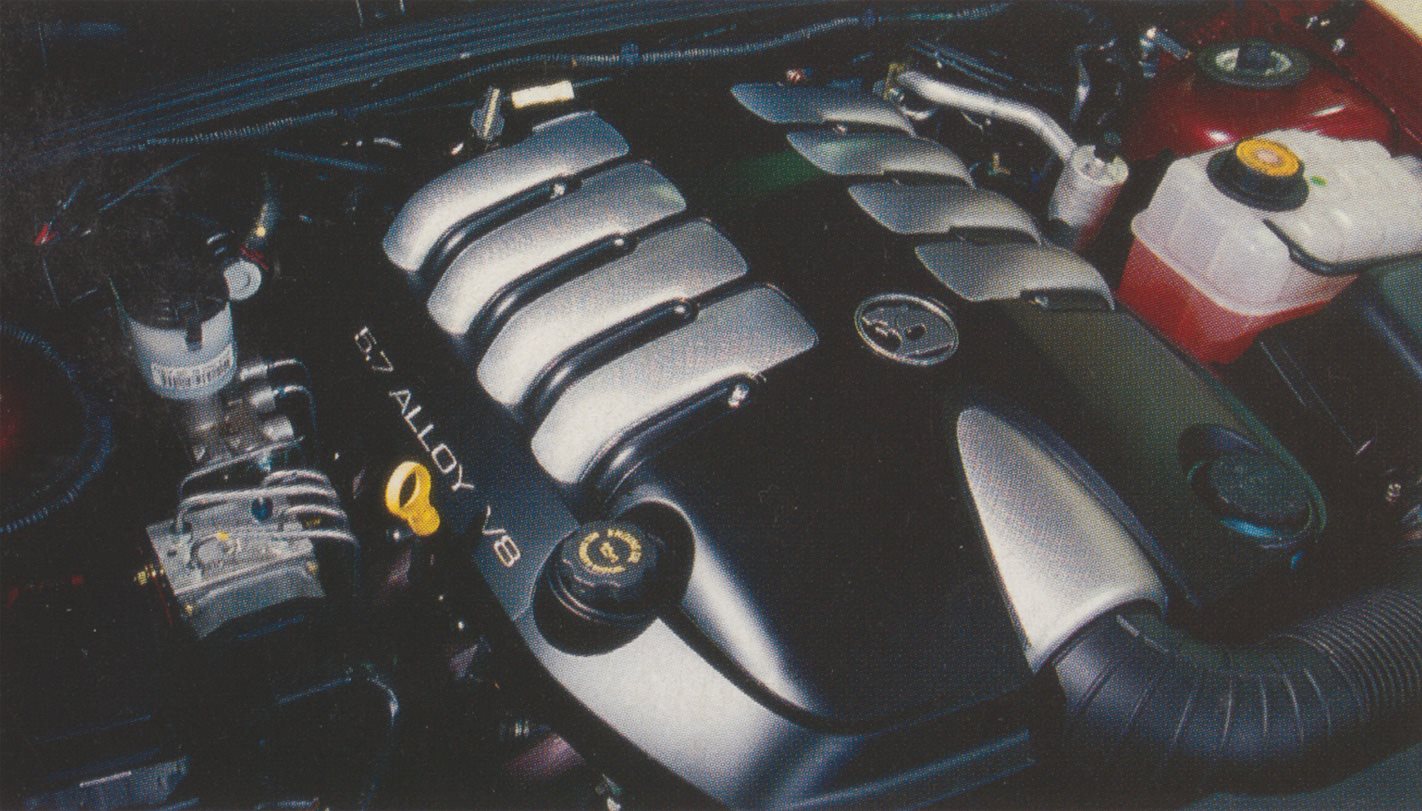 The arrival of the Chevrolet V8 was the worst kept secret in Australia - we've been reporting since 1996 how HSV would get the Gen III 5.7. It subsequently re-badged the engine LS 1 and while it shares this name with the Corvette V8, the specifications are different.

The decision to end the locally-built V8 came from Detroit long before the VT Commodore was launched, which explains why the VT engine bay is wider that the VS. The LS 1 is broader, more powerful, 30kg lighter and more fuel-efficient than HSV's previous, Aussie small block. It also revs to 6200rpm. Still pushrod with two valves per cylinder, the all-aluminium V8 is possibly the most advanced pushrod engine in the world, although there'll be some who say pushrod and advanced is an oxymoron.

Okay, the BMW M5's 5.0 litre, dohc 32-valve V8 is more powerful, but it is also hand-built at a rate of just 25 per day. GM executives in Detroit reckoned the cast-iron Holden V8 was not export quality and lacked technical and spare parts support for overseas markets. Other GM engine options were the 4.6-litre Cadillac Northstar V8 and the 4.0 litre Oldsmobile Aurora - both transverse mounted and less powerful than the LS1. 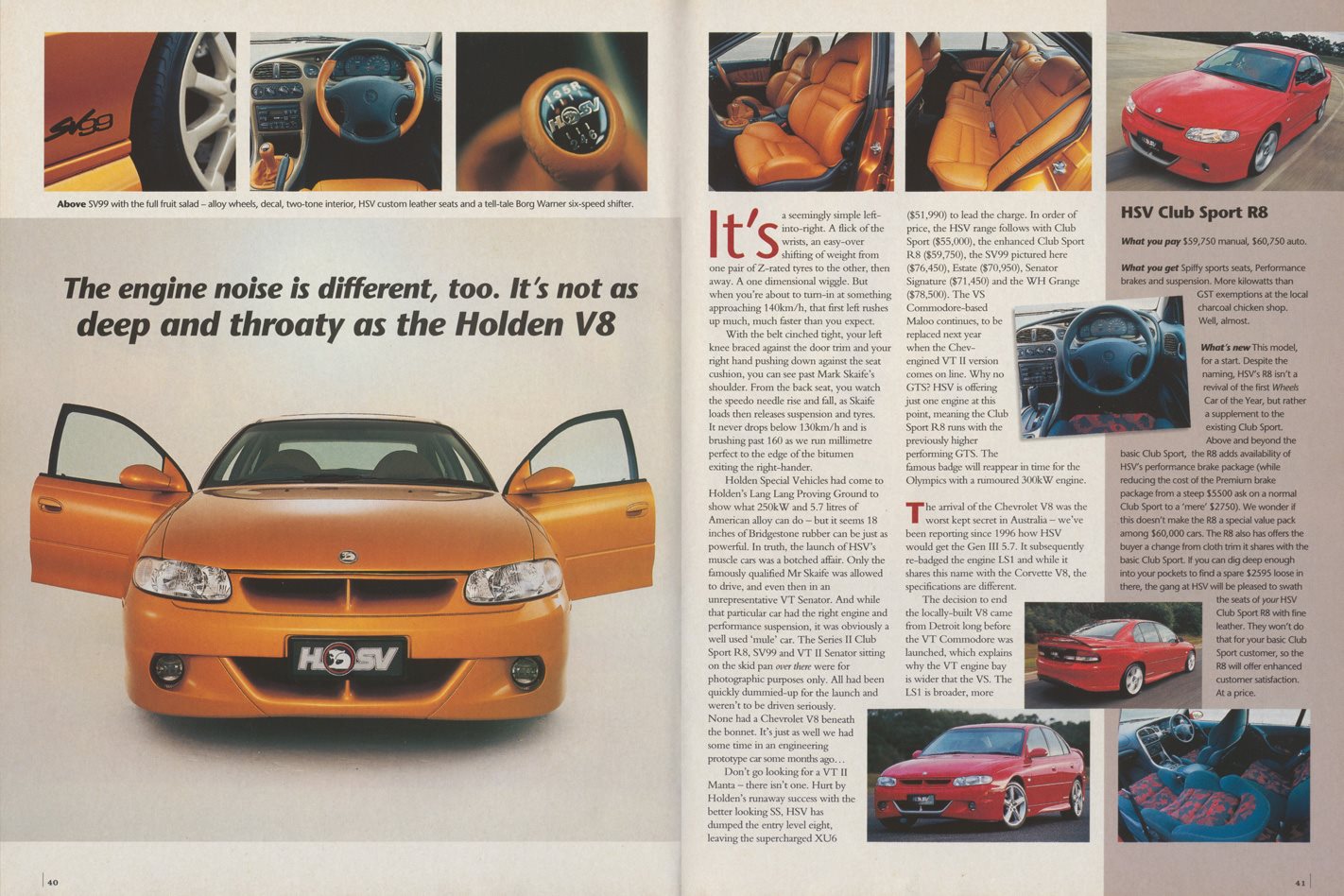 While more than 10,000 Gen IIIs will be imported into Australia each year (many for export to the Middle East in Commodores and Statesmans), HSV's engines will be of a unique specification. Tuned to run on premium 95 RON fuel, where Holden's Gen Ills are detuned to suit regular 91, a combination of exhaust technology and engine electronics has extracted more power and torque. 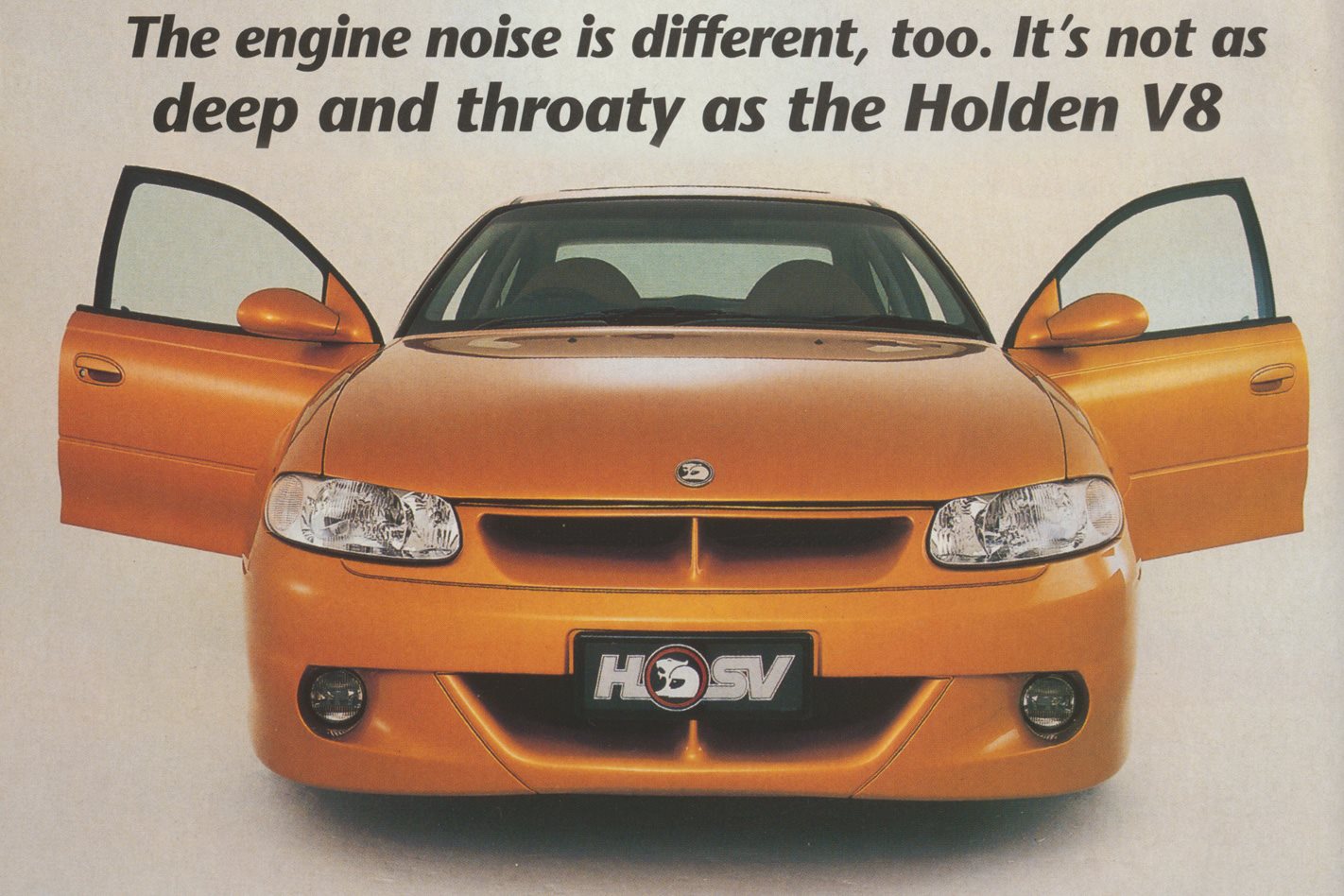 And the posh-riding, four-speed automatic Senator, supposedly posting 6.1sec 0-100km/h and 400m in 14.2sec, is quicker than Phase Ill Falcon and E49 Charger. We'll give you the independent numbers when HSV has production cars to drive. But we did get to sample a prototype Club Sport a few months before its public release. How could we refuse a drive through Melbourne's southern suburbs and a run through the Dandenong Ranges? The LS 1 engine transforms the car. The Aussie 5.71itre produced more torque but we often criticised it for being rough and lethargic above 4500rpm. This new Chev 5. 7 is absolutely smooth and twice as refined. Add to that almost 2000 more revs at the top end, and it is thrillingly quick. Redline sits at 6000rpm and the fuel cut-out is at 6200rpm.

Traction control is standard on automatic and manual ... and you'll need it. Often. The engine noise is noticeably different, too. Not as deep and throaty as the Holden V8, the Chev's exhaust note is higher, and up in the revs there's a definite mechanical buzz that sounds damn sexy. As part of the HSV in-house modification process, the LS1's cast iron exhaust manifolds (kept on Holden models) are tossed for a set of stainless steel HM extractors, low back pressure catalytic converters and 57mm stainless steel twin pipe exhaust system. 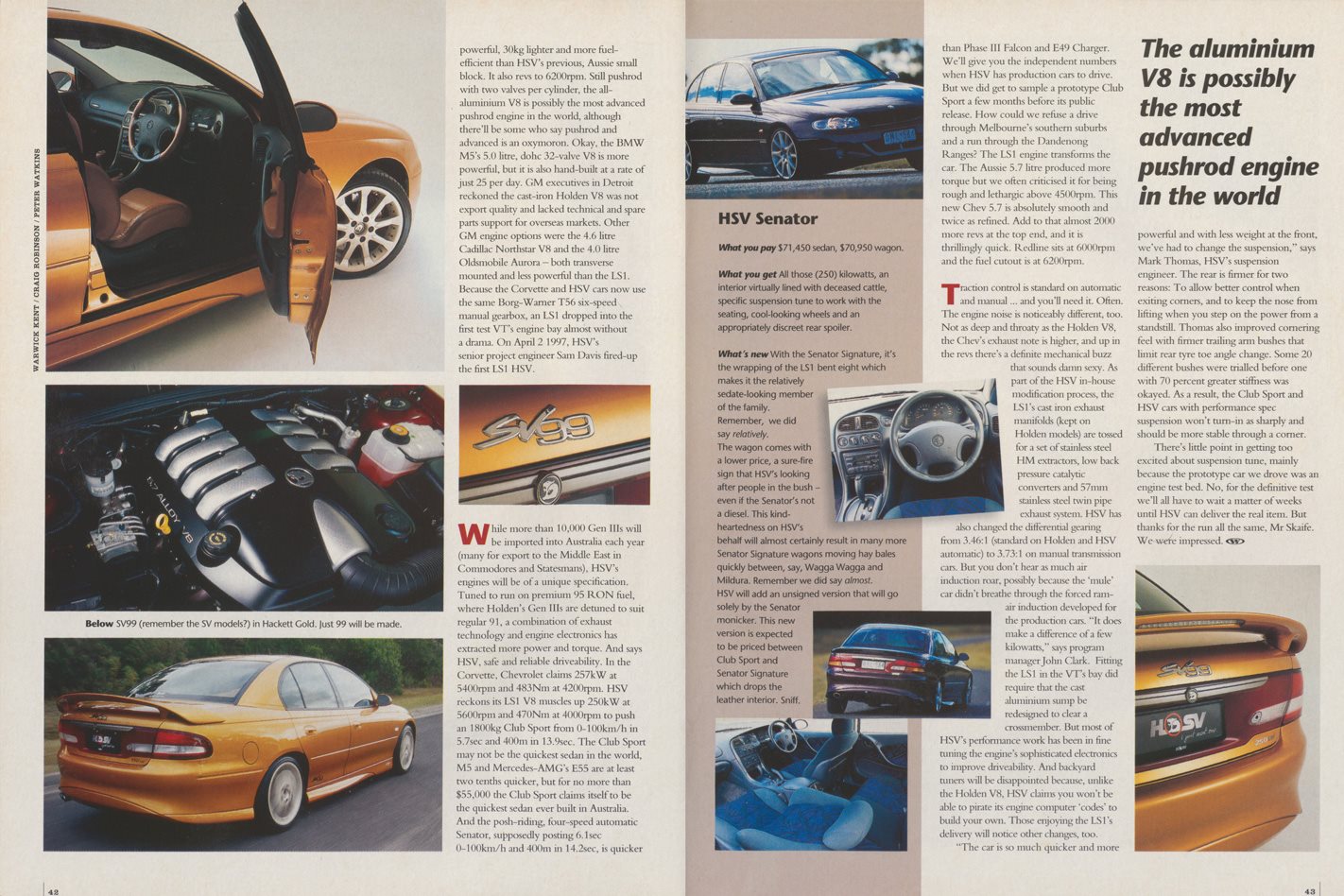 HSV has also changed the differential gearing from 3.46:1 (standard on Holden and HSV automatic) to 3.73:1 on manual transmission cars. But you don't hear as much air induction roar, possibly because the 'mule' car didn't breathe through the forced ram-air induction developed for the production cars. "It does make a difference of a few kilowatts," says program manager John Clark.

Fitting the LS 1 in the VT's bay did require that the cast aluminium sump be redesigned to clear a cross-member. But most of HSV's performance work has been in fine tuning the engine's sophisticated electronics to improve driveability. And backyard tuners will be disappointed because, unlike the Holden V8, HSV claims you won't be able to pirate its engine computer 'codes' to build your own. Those enjoying the LS1's delivery will notice other changes, too. 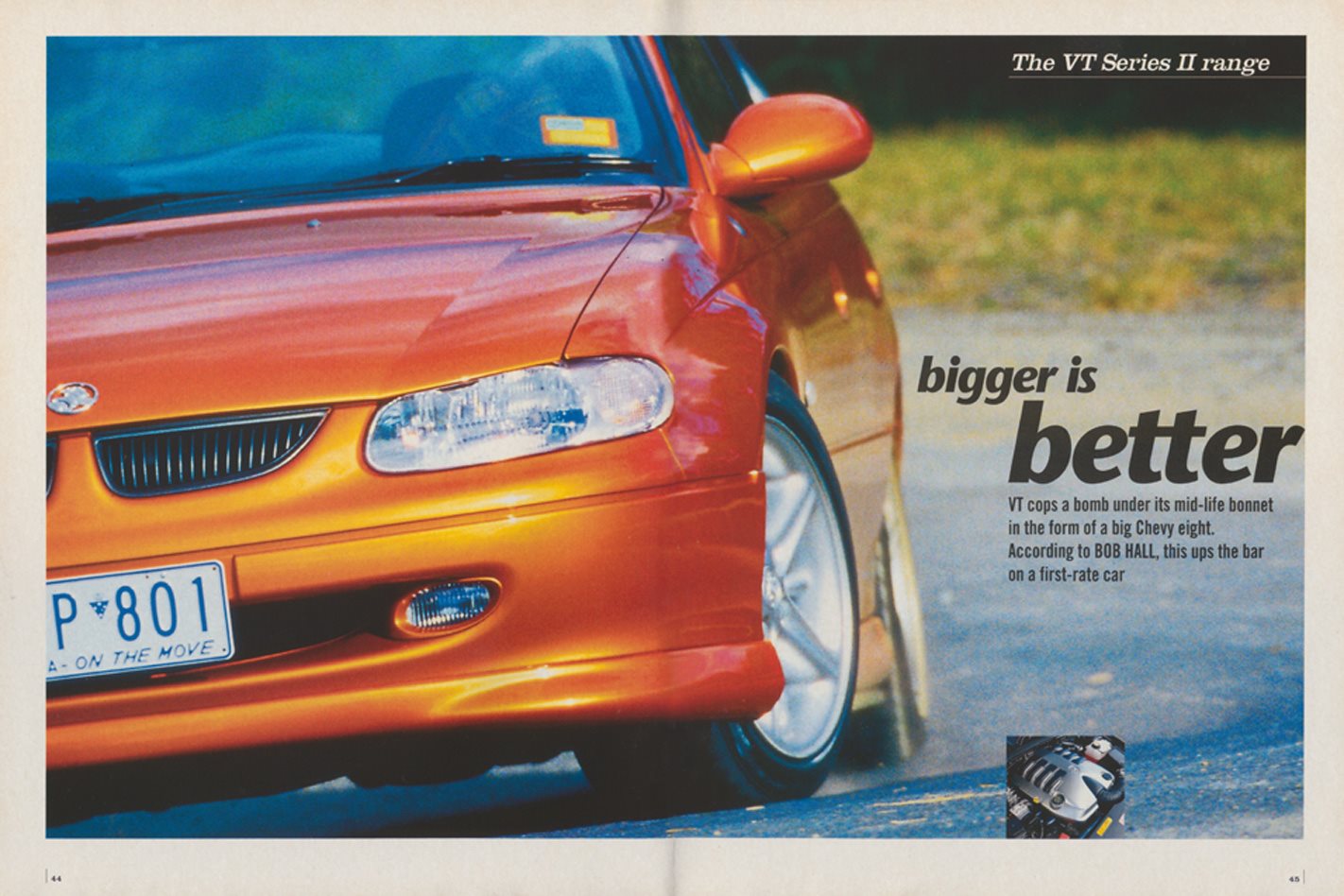 "The car is so much quicker and more powerful and with less weight at the front, we've had to change the suspension," says Mark Thomas, HSV's suspension engineer. The rear is firmer for two reasons: To allow better control when exiting corners, and to keep the nose from lifting when you step on the power from a standstill. Thomas also improved cornering feel with firmer trailing arm bushes that limit rear tyre toe angle change. Some 20 different bushes were trialled before one with 70 percent greater stiffness was okayed. As a result, the Club Sport and HSV cars with performance spec suspension won't turn-in as sharply and should be more stable through a corner.

There's little point in getting too excited about suspension tune, mainly because the prototype car we drove was an engine test bed.

No, for the definitive test we'll all have to wait a matter of weeks until HSV can deliver the real item. But thanks for the run all the same, Mr Skaife. We were impressed. 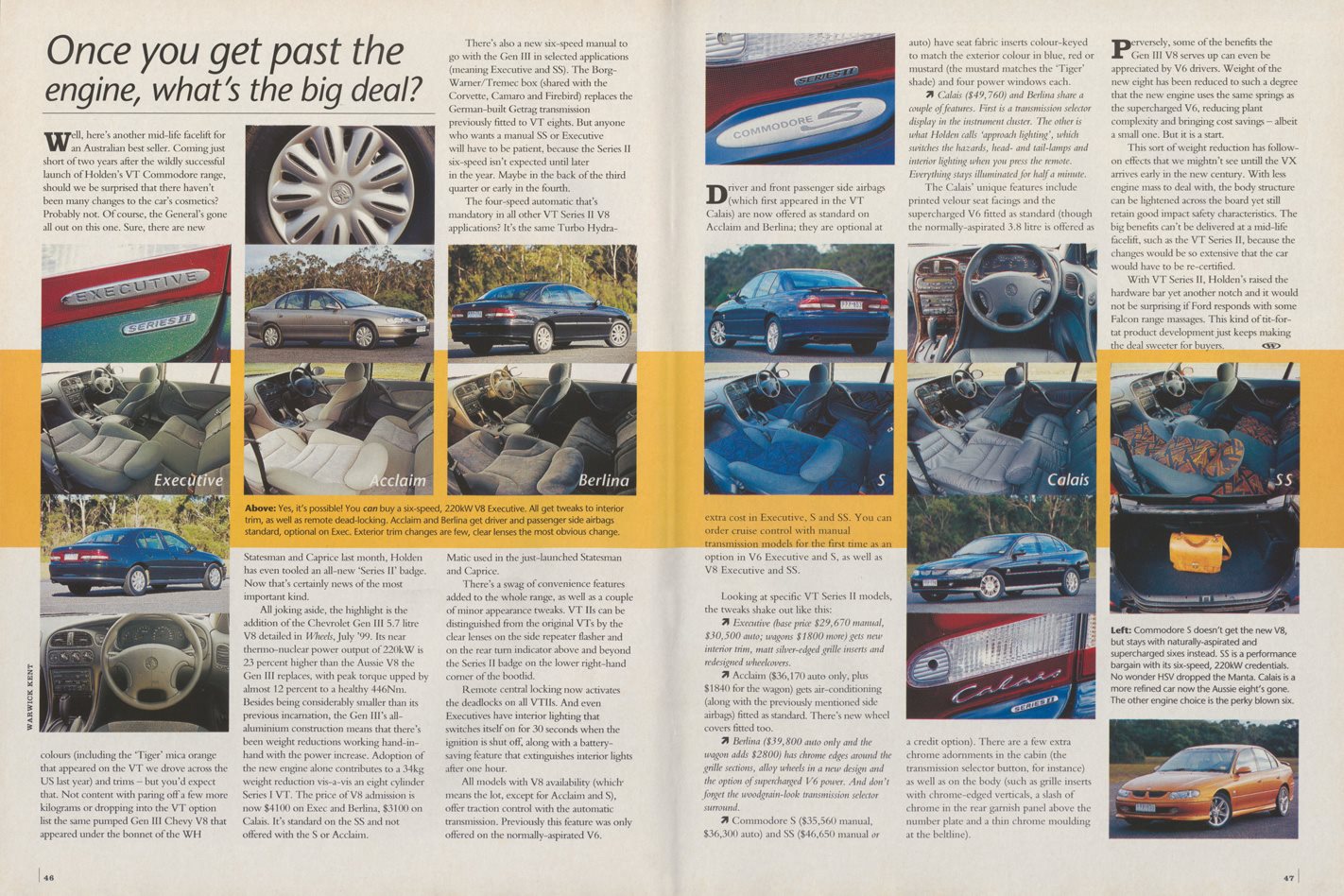 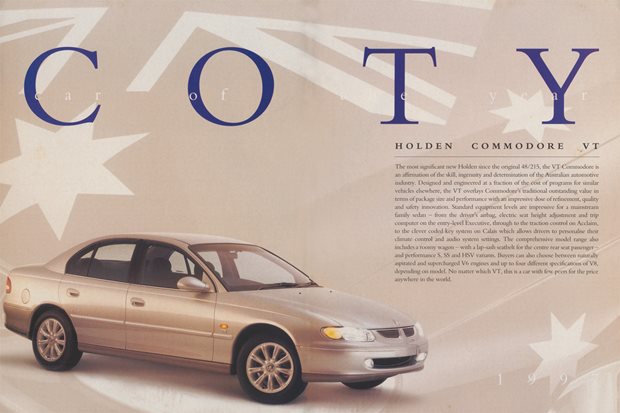 The most significant new Holden since the original 48/215, the VT Commodore is an affirmation of the skill, ingenuity and determination of the Australian automotive industry 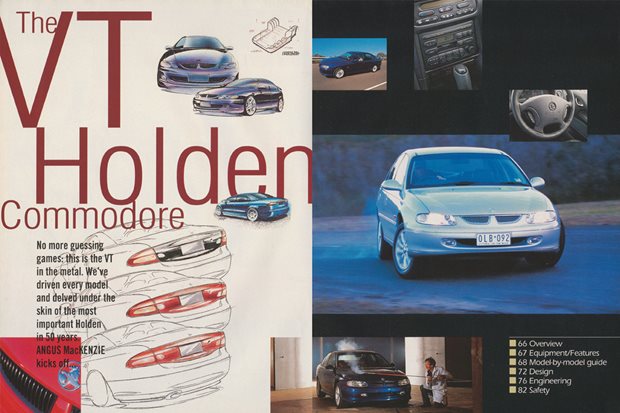 No more guessing games: this is the VT in the metal. We’ve driven every model and delved under the skin of the most important Holden in 50 years.