Bolder, better balanced and Brembo-braked, the SS V Redline spearheads Holden's important new VE Series II assault. Factor in its revamped interior, and you're looking at a Commodore that further narrows the gap between factory-fettled and HSV-honed

NOW HERE'S a Commodore after HSV's heartland. With the new Redline Edition, Holden, forever finding ways to intrude on HSV's territory, has introduced its baddest factory-built Commodore yet.

For the VE Series II, Redline has adopted an HSV mentality. You get the feel, the sound, some of the look and, most of all, nigh on the capabilities of an HSV, without the hefty price tag. Understandably, Holden plays down the rivalry. "HSV is above Redline," insists Fishermans Bend. But the Redline Edition – a bargain $2500 option on the Calais V and SS V in sedan, Sportwagon, and Ute - stops and corners just like its big-name Clubsport and GTS cousins in a rather more subtly styled package. 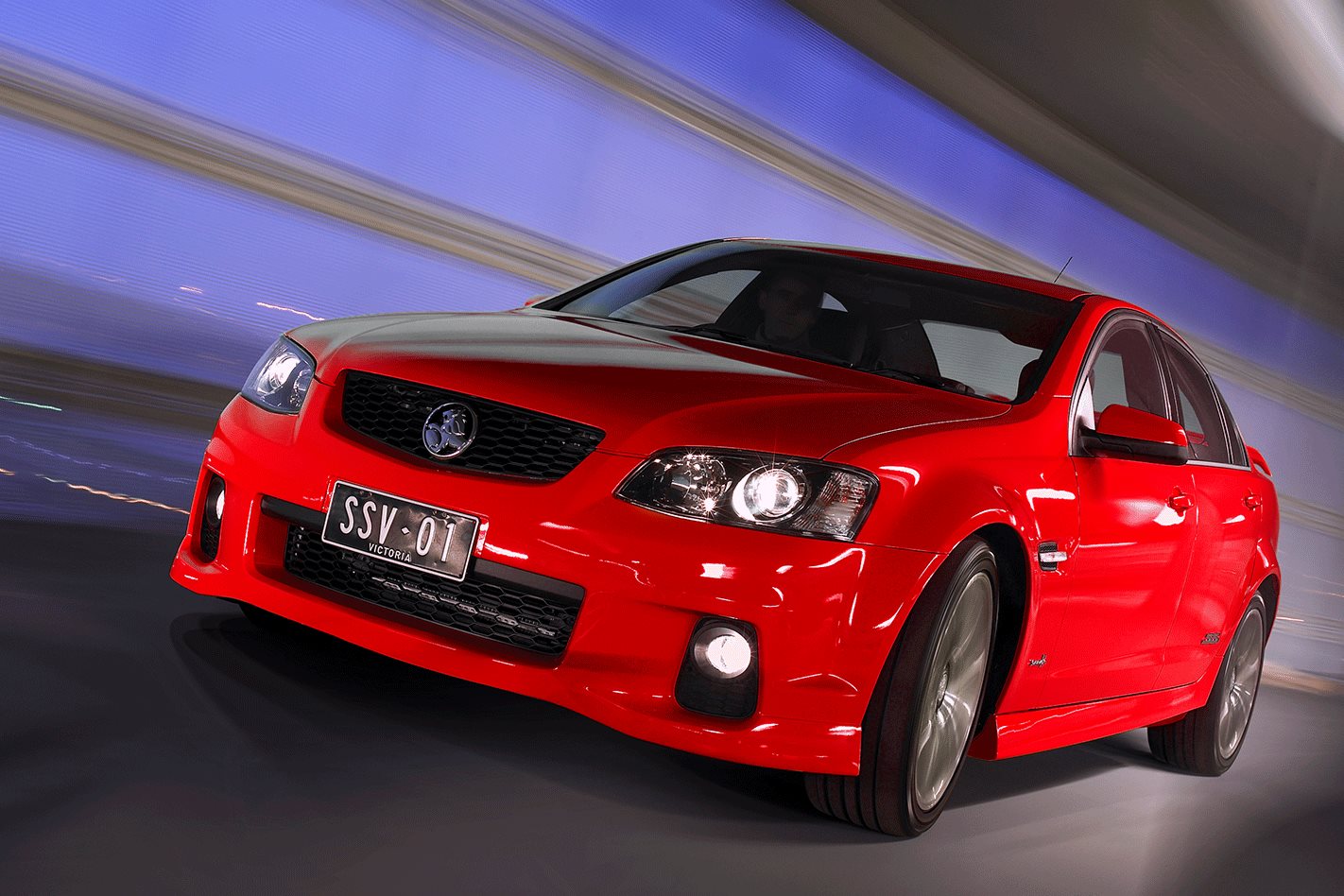 The only instant give-away to the Redline models are the highly polished, 10-spoke, 19-inch alloy wheels borrowed from the GXP version of the short-lived, Commodore-based G8 built for Pontiac by Holden. The forged wheels are wrapped in 245/40R19 Bridgestone Potenzas specifically developed for Holden, and house, at the front, 355mm vented rotors with four-piston, two-piece-caliper Brembo brakes.

Underneath the shiny parts, Redline sedans (but not the Sportwagons or Ute) serve up yet another Commodore suspension tune - known internally as FE3 - aimed explicitly at the hard-driving enthusiast. Retuned dampers are tauter and improve body movements via shorter primary control that suggests FE3 is the ideal Commodore for track day excitement. As well, the rear anti-roll bar diameter is increased from 18mm to 20mm. All of which is understated confirmation that the FEZ chassis tune, retained for the SV6, SS and SS V, demanded no more than a subtle tweak to match the stopping power of the mighty Brembos.

It's cold, despite moments of sun, and rain threatens, yet nothing can dampen the prospect of trying the FE3 on Lang Lang's legendary ride and handling circuit. Among a fleet of Series II Commodores on hand for our evaluation at Holden's proving ground, a lone Redline version - a Calais sedan - stands out, easily recognised by the shiny brilliance of its alloys, if you miss the new headlights and discreet grille with its prominent, bonnet-attached, chrome header. Sadly, no manual Redline SS V is on hand to reveal if a higher fifth gear ratio - 0.71 versus 0.84 – better plugs the gap between fourth and sixth. 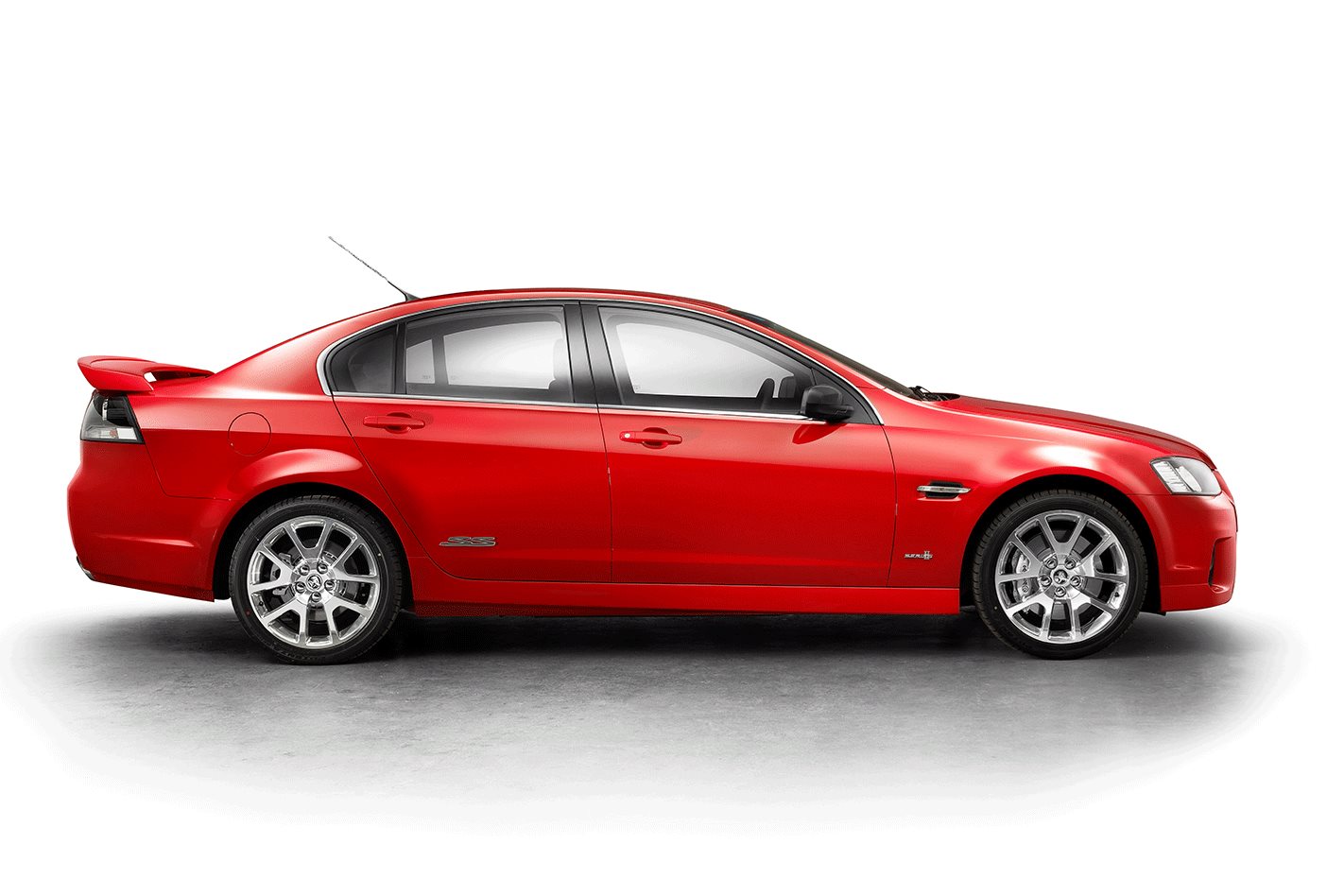 Nothing like attacking the rough, off-camber esses, halfway through a lap, to learn if FE3 works. Over the years these corners have instantly exposed any dynamic shortcomings of COTY contenders during our testing regime. Six-litre V8 hunting to the 6200rpm cut-out in manual mode, the Redline Calais invites commitment. It turns confidently into the first left-hander, stays near-flat, the body quickly settling, the weight beautifully balanced on both outside wheels. Stay out to the left, then flick back to the right. Bloody hell, the VE steering wheel's still too big and awkward to hold around the spokes. No changes there, nor to any other aspect of the steering.

Biggish wheel movements are demanded, but the transition to the right is swift and secure, and over the ripples the connection to the road is  responsive and encouraging. Yes, FE3 changes direction better than any Holden in my experience. If the superbly judged stability control intrudes at the outer edges, it's benign, supportive and never inhibiting. The railway crossing is absorbed cleanly, yet the barest hint of harshness suggests that on rough roads the tight ride may not be ideal; there was no public-road element for this preview drive.

Stomp hard, and the instant reponse from the Brembos is welcome. Pedal travel is shorter and the brakes immediately feel stronger than the standard set-up. 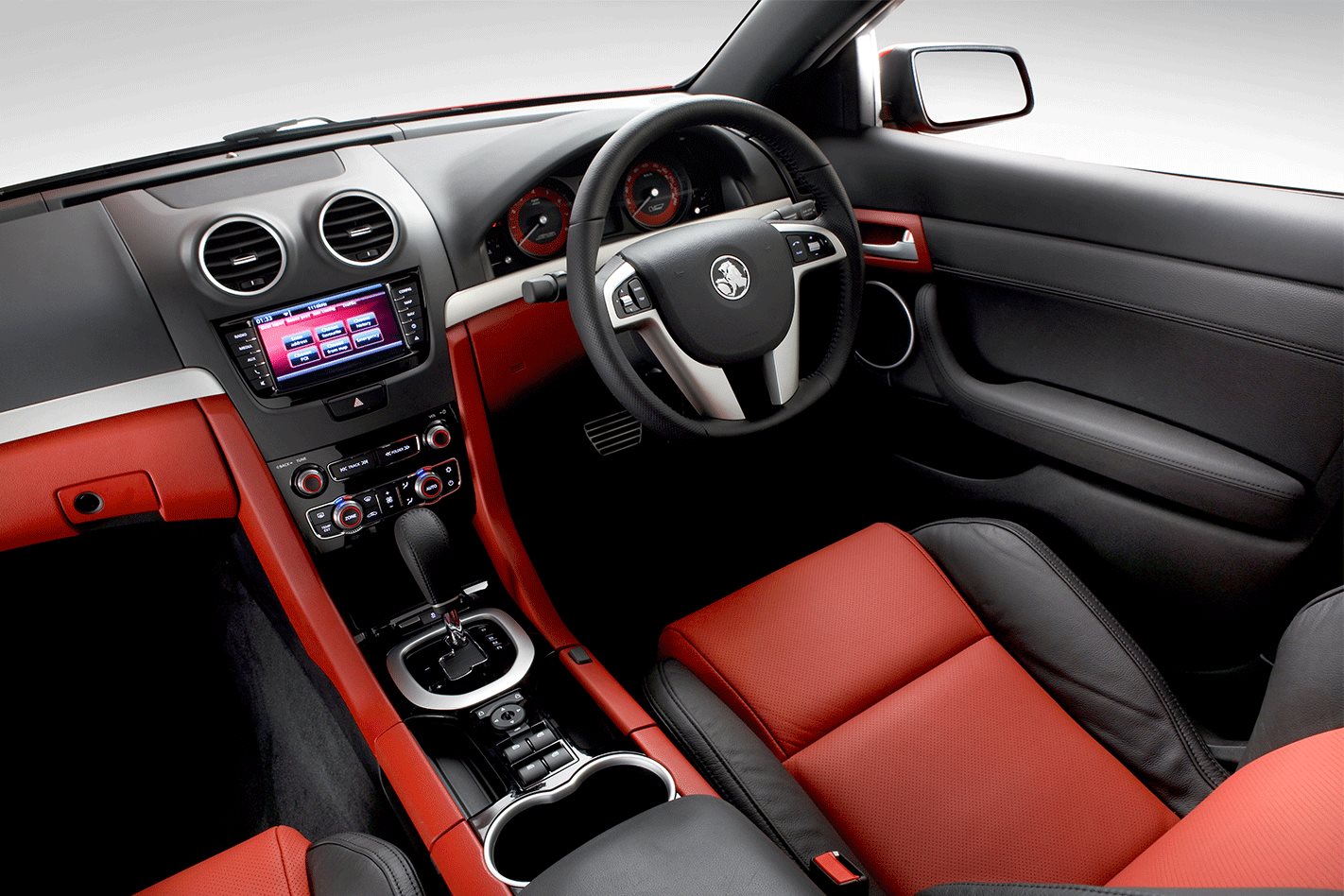 Minor tweaks to the auto transmission software mean down-changes are faster and the old tendency to jerk between ratios after a sudden back-off, followed by heavy acceleration, has virtually disappeared.

The HSVs have the 325kW (GTS and Grange) and 317kW 6.2-litre VB, yet Holden's now flex-fuel 270kW 6.0-litre V8 delivers grunt enough for most drivers. Holden promises more (if unquantified) mid-range torque on a diet of E85 fuel, especially in hot temperatures, and suggests we'll achieve the best acceleration numbers on the petrol/ethanol mix. The auto V8's 12.3L/100km combined consumption is a 2.5 percent improvement, while the manual V8s improve by 12 percent to 12.2L.

In part, the superior economy is due to a series of small aero tweaks which together lower the Series II VE's Cd to 0.330, compared with the old car's 0.354. A near fully enclosed (exhaust exposed) underbody, air deflectors in front of the rear wheels (common on most large Euro sedans), a deflector across the undertray in front of the front wheels and, on the sedans, a small built-in spoiler on the trailing edge of the boot lid, all play a part in reducing drag. Holden admits that GM has never been able to go close to equalling the Cd numbers claimed for European rivals in its Michigan wind tunnel, where much of the VE's development took place, and claims the VE is rather more competitive than the figures indicate. 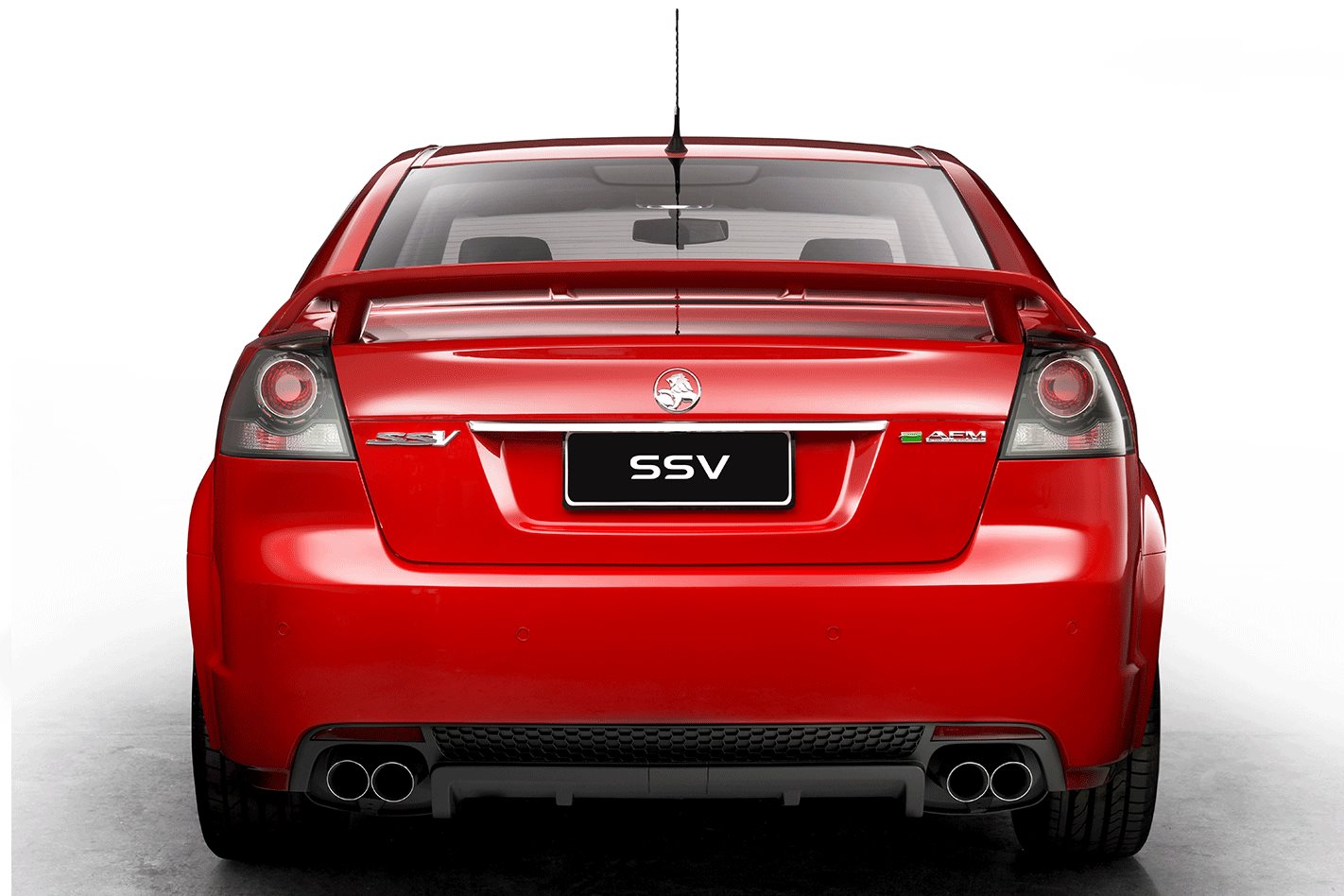 Design remains king, however. Eliminating those lovely front wheelarches would reduce the Cd by a further 0.02. Says senior designer Richard Ferlazzo, "We didn't want to apply the ugly stick and ruin the design integrity of the original, not when we have proportions that guarantee longevity."

After four years, the familiarity that comes with being Australia's best-selling car turned into the VE's biggest disadvantage. The new Series II (price unchanged) achieves surprising recognition from minimal change - the reality is Holden couldn't afford a major retooling bill - while the Redline Edition represents a clever and desirable range-topping addition to the new VE line-up.