39 Years of Holden Commodore: 2014 - Wheels Car of the Year finalist

WE HAD no idea, while evaluating the VF Commodore at COTY; that we’d never see its like again.

We might have suspected, and even whispered it, but Commodore’s death rites still seemed a long way off, back then. Certainly it wasn't any sense of pity or misty-eyed nostalgia that put the last Commodore ever on the podium. In a champagne year, the Holden deserved to be there. 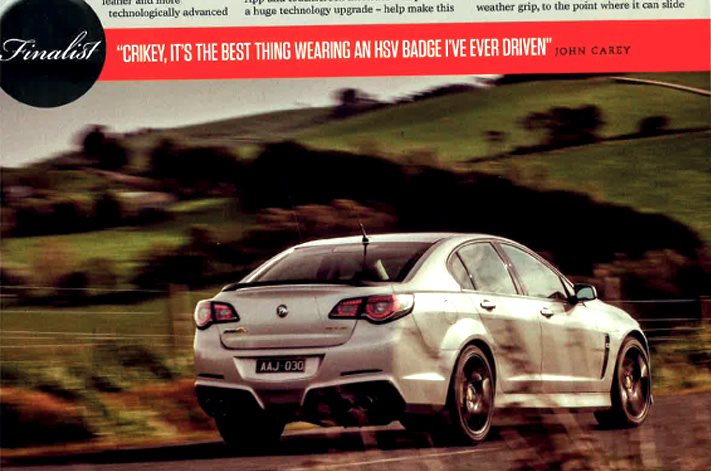 The fact that VF is a revamped VE Commodore rather than brand new meant it nearly missed COTY altogether. Weeks of heated debate over eligibility ensued; I was on the side of exclusion. But cooler heads prevailed. After all, about 90 percent of the sedan is different, Holden claims, with new or modified steering, suspension, interiors, electricals, and - roof and doors apart – body panels. Some, like the aluminium bonnet and bootlid, are Aussie-mainstream firsts.

Yes, the Holden drivetrain are fundamentally carryovers, while the Sportwagon and Ute keep the VE sheetmetal from the A-pillar back. But this is more than a simple facelift, and a disarming testimony to Holden's abilities under what turned out to be deadly economic duress. Don't forget that the four-year program commenced just as parent General Motors filed for bankruptcy in the US.

Yet even against newer, leaner and more technologically advanced models like the VW Golf, Renault Clio, and Mazda 6, the indigenous' car equalled and even bettered them on a variety of fronts.

And when you add value to the equation, here's a full-sized five-seater family car that performs well beyond its price point.

With a broad volley of VFs (and HSV' Gen-Fs) delivered to Lang Lang, everybody was acutely aware of the Holden’s home-ground advantage, so we spared it nothing in order to expose weaknesses. 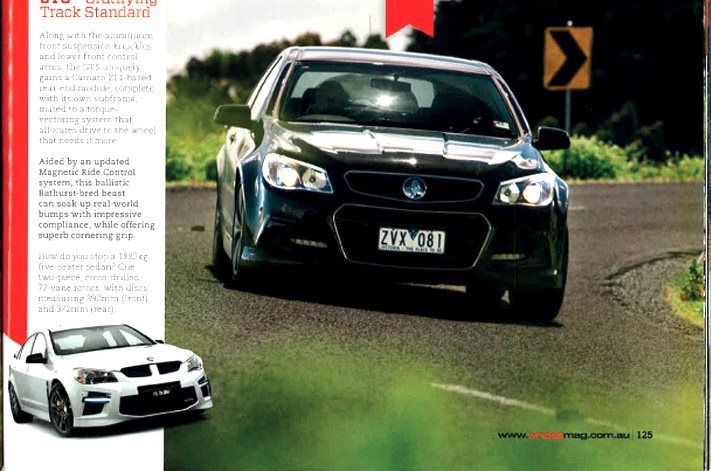 Priced from $34,990, the Evoke is around 43kg lighter than the Omega and Berlina it usurps, even though every VF boasts an interior presentation and equipment specification that makes the base model's $5000 price drop over the sparser VE even more profound value for money.

Holden’s cabin designers have created an uplifting ambience, with nothing brought over from the cruddy old interior save for the rear-view mirror, console lid, and rear vents. Of note 8re'cosseting front seats, a business class-like rear bench, Opel-esque dashboard and switchgear, a new steering wheel/column, integrated door cards, and extra storage. All are of export quality because the VF must fly as a convincing Chevy SS luxury/sports sedan flagship for the finicky American market.

Classy instrument graphics, contemporary materials, and GM’s MyKey downloadable app and touchscreen interface - as part of a huge technology upgrade - help make this Commodore's cabin the most modern ever.

That the Evoke standardises these – along with Bluetooth, an electric park brake, rear-view camera, front and rear parking sensors, and automatic parking distance - is outstanding. Today's base Commodore is more Calais than Berlina. Yet additional series strengths, like sprawling space – and a driver-oriented environment, remain. In fact, thanks to the newly concave dash shape, there's even more room. 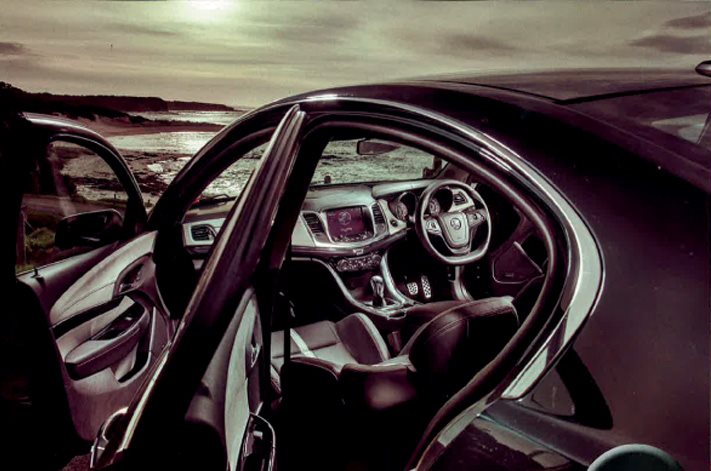 On the flipside, the VF continues with vision-blotting A-pillars (despite featuring thinner lining to reduce their bulk) while a 1984 XF Falcon-era oversized ski port in lieu of a fully folding rear backrest is hardly versatile in this day and age.

Sharing the FE1 Touring suspension tune with the Calais/Calais V, the Evoke is comfort flavoured, but in isolation the beautifully calibrated electric power steering straddles the fine line between relaxed and responsive, like a finely engineered sports sedan. "Is it the best ever?" Peter Robinson asked.

Holden has attempted to refine the thrashy 185kW/290Nm 3.0·litre V6, but it still needs plenty of prod, and isn’t exactly sweet. To help achieve respectable economy (we averaged high-10s against a claimed 8.3L/100km) the Evoke employs low-resistance 225/60R16 Bridgestone Ecopia but suffers from dramatically reduced wet-weather grip, to the point where it can slide around alarmingly, before the exquisitely tuned ESC system reins it all in.

The $39,990 Calais' 18-inch footwear suffers no such slippage. And in real-world conditions, few cars can match its incredible comfort. Only when driven back-to-back with the FE2-suspended SV6 and SS, and the FE3 Redline, was its relatively soft tune apparent. 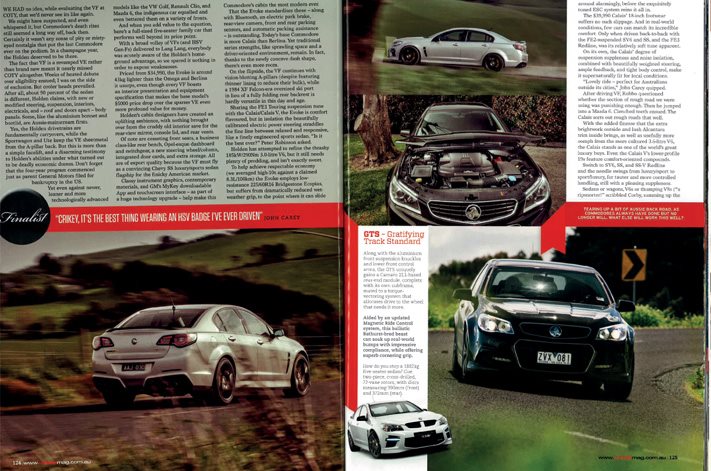 On Its own, the Calais' degree of suspension suppleness and noise isolation combined with beautifully weighted steering ample feedback, and tight body control, make it supernaturally fit for local conditions.

After driving VF, Robbo questioned whether the section of rough road we were using was punishing enough. Then he jumped into a Mazda 6. Clenched teeth ensued. The Calais sorts out rough roads that well.

With the added finesse that the extra brightwork outside and lush Alcantara trim inside brings, as well as usefully more oomph from the more cultured 3.6-litre V6, the Calais stands as one of the world's great luxury buys. Even the Calais V's lower-profile 19s feature comfort-oriented compounds.

Switch to SV6, SS, and SS-V Redline and the needle swings from luxury/sport to sport/luxury, for tauter and more controlled handling, still with a pleasing suppleness.

Sedans or wagons, V6s or thumping V8s ("a ripsnorter!" scribbled Corby, summing up the engines' effortless punch), these are vehicles with reactive, agile chassis, for sharp yet consistent and stable sports-sedan dynamics. 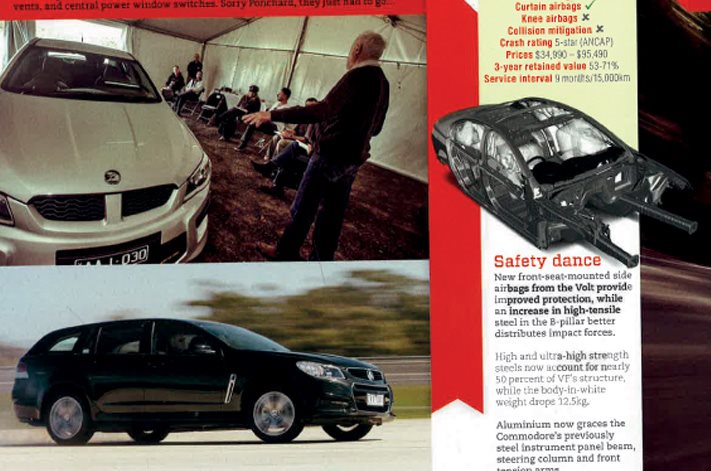 There won't be any mistaking these for a Camry Sportivo. And we'll cop the (slightly) harder ride and noise intrusion. Meanwhile, BMW M and AMG might wonder when HSV learned how to make one of the greatest GM cars in history.

Some critics reckon the leap from $60,990 Clubsport to $83,990 Senator might be a case of diminishing returns, because of the reduced visual differentiation compared to the old VE-based versions, but the Gen-F's newfound finesse - to go with the thumping 340kW/570Nm 6.2-litre LS3 unit - puts clear space between Holden and HSV offerings.

Meanwhile, the $92,990 GTS is another beast altogether. This one warps space and time. "It's everything I hoped for and far more than I realistically thought they'd achieve," said editor Butler.

Wrecking-ball performance has long been an HSV strength. However, the convergence of snatch-free 430kW/740Nm supercharged LSA VB brawn, a weighty but no longer notchy six-speed manual gearbox, V8 Supercar-class braking, sensational steering feedback, and a bespoke rear-suspension module, show that the crew from Clayton can keep up with the Teutonic uber-saloons – and not just on the straights, either.

"Crikey, it's the best thing wearing an HSV badge I've ever driven," said Carey. "Lots of power, but lots of everything else." 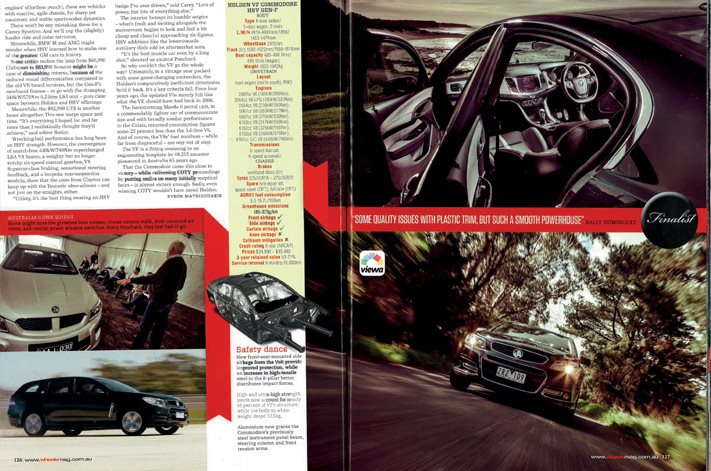 The interior betrays its humble origins – what's fresh and inviting alongside the mainstream begins to look and feel a bit cheap and cheerful approaching six figures. HSV additions like the lower-console auxiliary dials add an aftermarket aura.

"It's the best muscle car ever, by a long shot," shouted an excited Ponchard.

So why couldn't the VF go the whole way? Ultimately, in a vintage year packed with some game-changing contenders, the Holden's comparatively inefficient drivetrains held it back. It's a key criteria fail. Even four years ago, the updated V6s merely felt like what the VE should have had back in 2006.

The barnstorming Mazda 6 petrol unit, in a commendably lighter car of commensurate size and with broadly similar performance to the Calais, returned consumption figures some 25 percent less than the 3.6-litre V6.

And of course, the V8s' fuel numbers – while far from disgraceful - are way out of step.

The VF is a fitting swansong to an engineering template its 48-215 ancestor pioneered in Australia 65 years ago.

That the Commodore came this close to victory – while enlivening COTY proceedings by putting smiles on many initially sceptical faces – is almost victory enough. Sadly, even winning COTY wouldn't have saved Holden.