Will the suits ever learn? Once again BMW has graced us with a jaw-dropping show car yet the company is adamant that not only will it not be built, according to BMW chief brand designer Karim Habib it’s not likely to influence the styling of future product either.

Following on from the 2008 M1 Hommage, which celebrated 30 years of BMW’s first supercar, and the 2011 328 Hommage, which paid similar tribute to the Mille Miglia-winning roadster on its 75th anniversary, the Hommage CSL has been created in memory of the famous ‘Batmobile’, BMW’s E9 3.0 CSL.

Three great show cars, three missed opportunities, as once again the company behind these show-stopping creations refuses to recognise their potential, draw up a business case and run them through a couple of customer clinics. The only way to change the minds of the bureaucrats is through public opinion, so let’s take a closer look at what constitutes a 21st century BMW CSL. 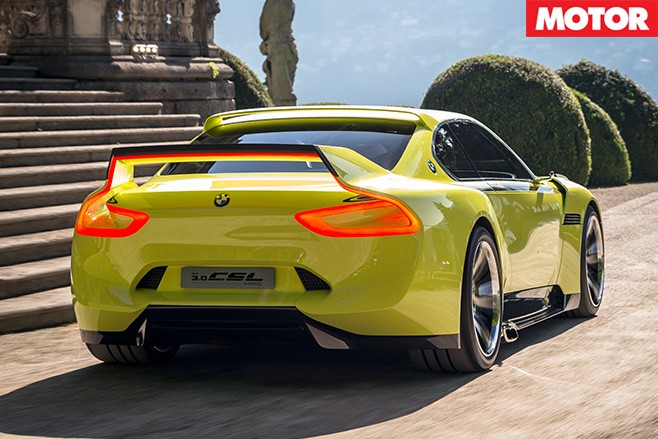 First, though, a history lesson, so pay attention. Created in conjunction with Alpina, the first CSL was a homologation special designed to dominate the European Touring Car Championship, and that’s precisely what it did, winning six out of seven titles between 1973-’79.

The ‘L’ in CSL stands for leicht (German for light) and thanks to the use of thinner steel for the bodyshell, aluminium body panels, Perspex windows and no soundproofing these road racers weighed just 1165kg, a substantial 200kg less than the 3.0CS/CSi on which they were based. Thanks to the level of luxury and safety required for modern motoring the Hommage CSL hasn’t a hope of getting within cooee of that figure, but then with an estimated 370kW on tap it doesn’t really need to.

Sitting beneath that radically sculpted front clamshell is the 3.0-litre straight-six from the 435i, ably assisted by two conventional turbochargers and one electric unit; the two energy reservoirs from which the e-charger draws sit above the rear axle in place of seats. As the engine fires up the air on the passenger side blurs as the side-exit exhaust emits a noise that wouldn’t be out of place in the Le Mans pit lane.

Before we can commence our ’round-the-block encounter – literally, as the only location we can drive the unregistered, handbuilt canary yellow coupe is on the private grounds of Villa Erbe, next door to Villa d’Este – there is the small matter of getting inside. 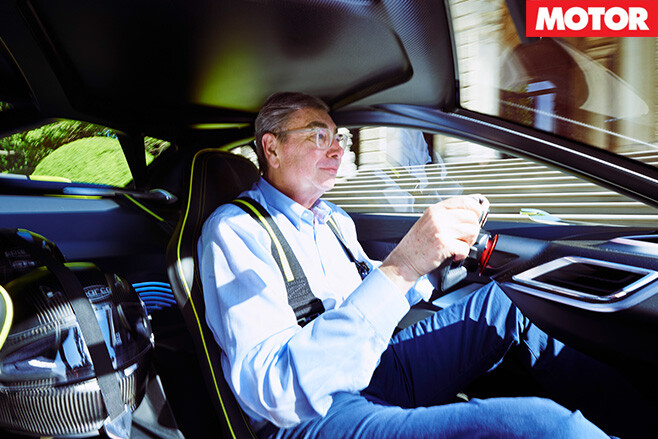 The doors open wide and the cabin is unexpectedly spacious, but sliding into the cockpit requires extra care because the solid-looking carbon fibre sills are actually wafer thin and the seat frame is made of fragile small-diameter aluminium tubes.

You sit low in a dark tunnel of man-made materials. This sombre environment is enlivened by alloy-capped pedals and plenty of bright yellow stitching. Everything about this interior is trying very hard to exude racecar cool, from the slim-fit, fixed-back carbon bucket seats, the lightweight headlining, the fire extinguisher system and helmet stowage behind the seats.

Most obvious of all, however, is the radical butterfly-shaped steering device – to call it a wheel would be plain wrong – a stylised version of the helm found in BMW’s M4 DTM racer. But while the majority of the cabin is dedicated to previewing the road racer of the future, there are some lovely retro touches like the full-width wraparound wooden dash and nylon door pulls that hark back to when Hans-Joachim Stück and Niki Lauda were giving Ford Capris the hurry up around the Nürburgring.

Credit must go to BMW for making all its show cars driveable art, even if practical realities restrict the actual level of ‘driving’ that can take place. With this one-off automotive sculpture due to be revealed to the world in eight hours, speed is limited by hand signals to whatever the BMW minders deem acceptable.

The turning circle is gargantuan thanks to fat 21-inch wheels wearing 265/35 rubber at the front and 325/30 on the rear and the dampers feel almost solid to prevent that glossy front splitter from eating gravel. 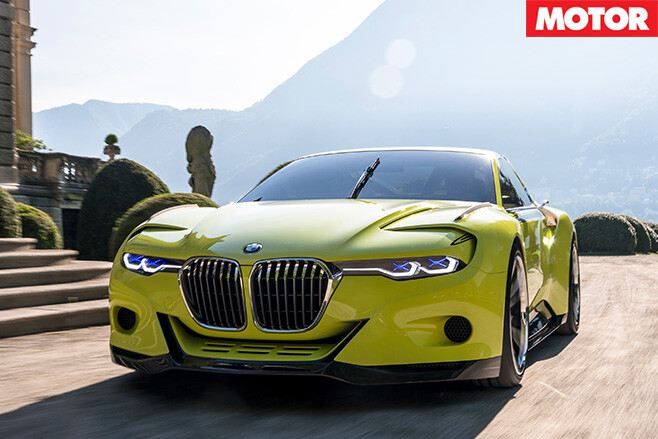 Even this heavily restricted experience offers a tantalising taste of what could be, though. All it takes is one quick stab at the throttle for this beast to leap forward with a growl – and subsequently gives the minders a near-heart attack – before the enormous Brembo brakes promptly bring speed back down to a more PR acceptable level.

In its current guise, the Hommage CSL feels to have the mechanical aggression to back up those wild looks. Of the five available solid period colours, Golf Yellow was rightly picked as the most eye-catching shade.

Further nods to the past are present in the full-length black rallye stripes, circular air intakes in the front bumper, chrome window surround and two BMW roundels just aft of the signature Hofmeister C-pillar kink. Imbuing the shape with modern muscle car aggression are those outrageously flared guards with “integrated wrapover wings” and the towering rear spoiler with integrated taillights. 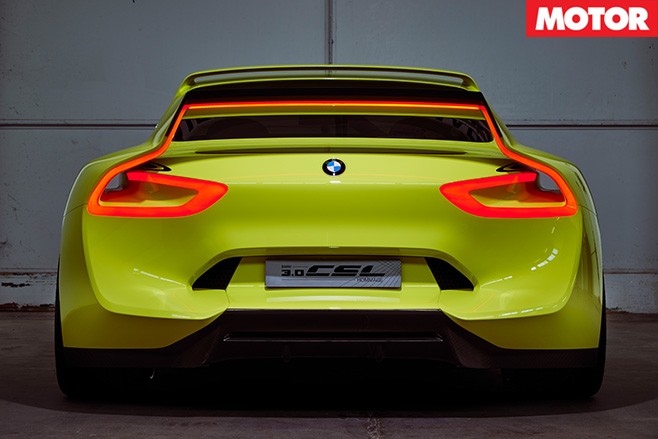 So where to from here for BMW’s latest concept? Habib sticks to his one-off credo. “There is so much else that needs addressing – autonomous driving, CO2, connectivity, you name it,” he says. “We don’t know yet to what extent these new priorities may dent the demand for the proverbial ultimate driving machine.” Disturbing words from a brand that once put driving dynamics above almost all else.

As it is, the Hommage CSL may indeed be too costly to be built at a profit, but when you want to invest in the brand, giving continual thumbs down is the wrong strategy. Having said no to the proposed 9 Series and M8 supercar, BMW management should give the CSL idea a second chance. Related opportunities include a contemporary 2002 positioned clearly below the M235i or a no-frills Bavarian Mustang powered by that iconic straight six.

Habib, who by now is wondering what I have been smoking, continues to tow the party line. “The Hommage cars make sure that old-fashioned excitement is alive and kicking. And don’t worry, we have more than enough ideas for the next three or four iterations.” Excitement, old fashioned? Will the suits ever learn? 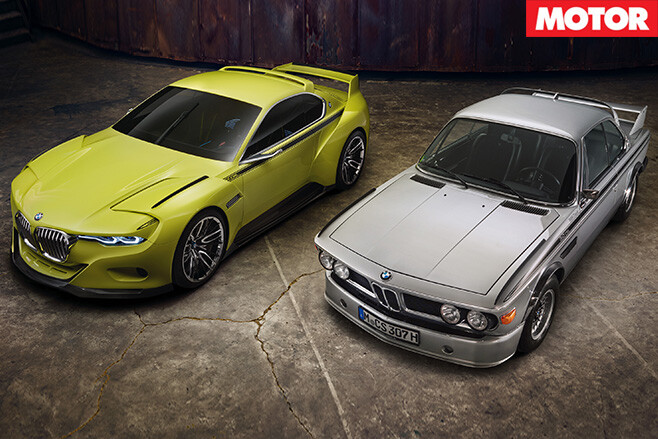 PAYING HOMMAGE
The new CSL Hommage pays tribute to the famous E9 3.0 CSL ‘Batmobile’ (pictured above), but it’s not the first time BMW has dug into its back catalogue for inspiration. The sensational M1 Hommage celebrated 30 years of Munich’s first supercar and was a design precursor to the i8, whereas the 328 Hommage was released in time for the 75th birthday of the iconic 328 Roadster. i8 aside, it would be nice to see some of this bold design present in BMW showrooms in future.