Nothing in the saga of Australian cars and car magazines approaches Ford versus Holden, blue versus red for longevity, significance or volume.

Through almost six decades, these comparisons became the core element of the magazine and its cover.

You must go back exactly 56 years to find the first. The October 1960 issue carried only the Ford Falcon on the cover, but in a “special test”, Wheels compared Ford’s all-new Falcon and Holden’s FB.

In the story’s subheading, editor Ian Fraser conveyed something of the behind the scenes dramas, admitting: “This story is not listed on the contents page of this issue, as it was prepared after earlier sections of the magazine were printed. It is a ‘stop press’ feature we know every reader of Wheels magazine is waiting to read; a reliable road test under identical conditions of Australia’s two most talked about cars.” 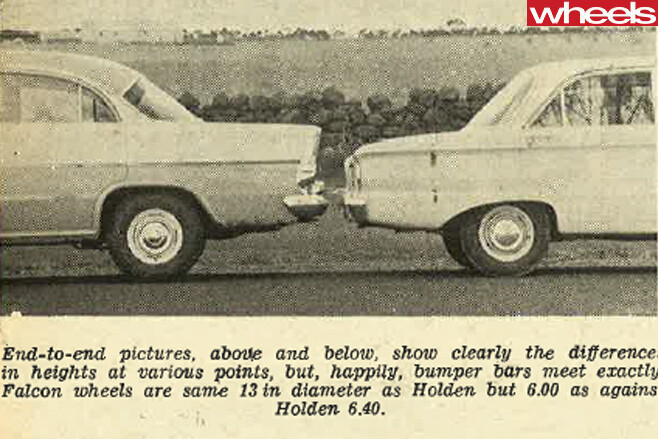 Not only was it the magazine’s first Holden v Ford story, it was also our first comparison. Not until Bill Tuckey became editor three years later would Wheels regularly compare rival models, a tradition that continues to this day, of course.

Side-by-side photographs of the two cars tell the story. The Falcon looks at least a generation ahead of the Holden in terms of styling. Which it was, given the FB was a heavy facelift of the 1956 FE, mostly to introduce a wraparound windscreen and vestigial tail fins.

You’ll find no tail fins on the Falcon, however. Ford also preferred a far more contemporary and huge multi-curved screen. Their respective heights confirm the Falcon’s design lead: it’s a massive 136mm lower than the upright Holden, while the Ford’s wheelbase (at 2781mm it’s just 57mm shy of today’s FG X Falcon) is 114mm longer, despite a difference in overall length of just 9mm. 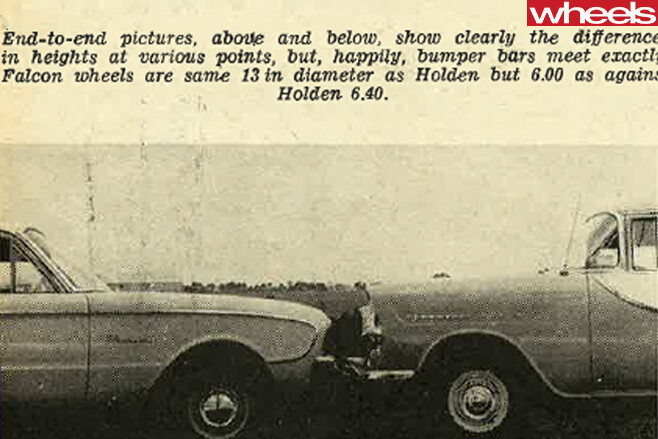 Ford’s all-new short-stroke in-line six-cylinder, which shares its bore centres with today’s engine, despite adding twin camshafts, fuel injection and five decades of development, also compared favourably in terms of power (plus 20 percent) and torque (plus 15 percent) with the long-stroke Holden engine.

Fraser’s stopwatch recorded a standing quarter-mile (400 metres) time of 20.5sec for the Falcon, against 22-neat for the Holden. The difference in economy on test was even more profound: 11.1L/100km for the Ford versus 13.3 for the thirsty Holden.

Away from the test track, Fraser preferred the handling of the Holden, mostly because of the Falcon’s low-geared steering. With five turns lock to lock, he wrote that it “seems unnecessarily low, to put it very mildly … it has no basis in the realms of sensible design on a car that weighs only a ton (1041kg, or 90kg lighter than the FB)”.

What was Fraser’s conclusion, as printed in the introduction? “After we had completed the tests we seriously asked ourselves which was the better car overall. We concluded that the Falcon was slightly superior in most aspects, some of them so subtle that many people would not even notice.”