The Focus ST proves there’s blue-oval appeal beyond Broadmeadows. We dig into the global catalogue for Ford’s latest hits… and the ones we missed.

The Focus ST proves there’s blue-oval appeal beyond Broadmeadows. We dig into the global catalogue for Ford’s latest hits… and the ones we missed.

First published in the July 2012 issue of Wheels magazine, Australia’s most experienced and most trusted car magazine since 1953.

American petrolheads view Australia as the last refuge of rear-wheel-drive performance, land of V8 Supercars and birthplace of the current Chevrolet Camaro. But that perception is mostly just a cultural kinship. In reality the muscle car is alive and well on Yankee soil. The latest proof: the 2013 Ford Mustang GT500. With an output of 494kW, the GT500’s engine is among the world’s most powerful production V8s. Ford claims a top speed of 202 miles per hour (325km/h). And its base price in the States is just $54,995. The Shelby GT500 is like the Model T of supercars in making massive horsepower available to the masses.

The big news, of course, is the engine, bored out to 5.8-litres with a 2.3-litre Eaton TVS supercharged perched on top feeding in 15psi of boost. Compression increases to 9.0:1, and new high-lift camshafts are borrowed from the Ford GT supercar. A special over-rev feature allows a 7000rpm limit for eight seconds at a time, up from the nominal 6250rpm redline. 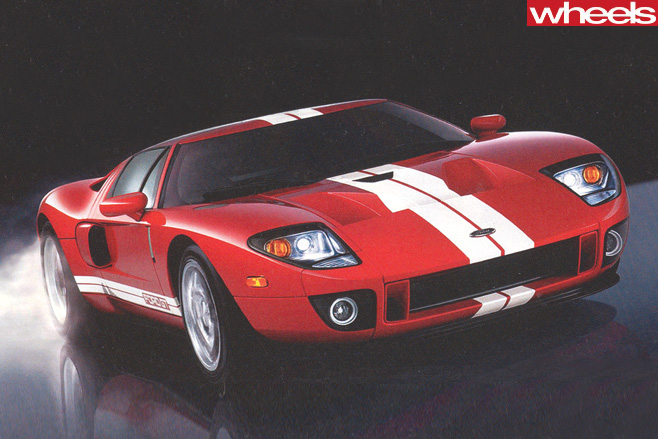 Even in base trim the GT500 is supposed to hit Ford’s 202mph official figure. An optional performance pack upgrades the rear limited-slip to a Torsen unit and adds cockpit-adjustable Bilstein dampers. A track package adds oil, differential, and transmission coolers to the list of heat exchangers fed by the Shelby’s gaping, grille-less snout.

A carbonfibre driveshaft shaves 6.5kg and enables the new top speed, as the old two-piece metal shaft would vibrate excessively above 18-mph (290km/h). And a 3.31 final-drive ratio puts terminal velocity in fifth gear at 6400rpm, just 100 revs below the power peak. Despite the tall gearing, Ford says the GT500 will hit 97km/h (60mph) in 3.7 seconds and reach 160km/h in less than 8.0sec. And a programmable launch control system that limits wheelspin makes those figures achievable for the novice driver.

Behind the wheel the GT500 drives like you might imagine a classic ‘70s Trans Am race car would, except probably quicker and, with tyres that grip over 1g, probably faster around a track as well. The shifter and clutch are heavy, the Mustang leaps at the slightest throttle prod in the lower gears, and the exhaust booms through quad 3.5-inch tips. The Shelby feels every bit as powerful and intimidating as you’d expect a 682-horsepower Mustang to be. It’s brutish, but mostly in a good way; kind of like America itself.

THE PREVIOUS-gen Fiesta ST (XR4 in Oz) was a $25K handling revelation ... but it was pretty ordinary in the engine compartment; its atmo 2.0-litre four- a pretty uninspiring one -just couldn't match turbo rivals. 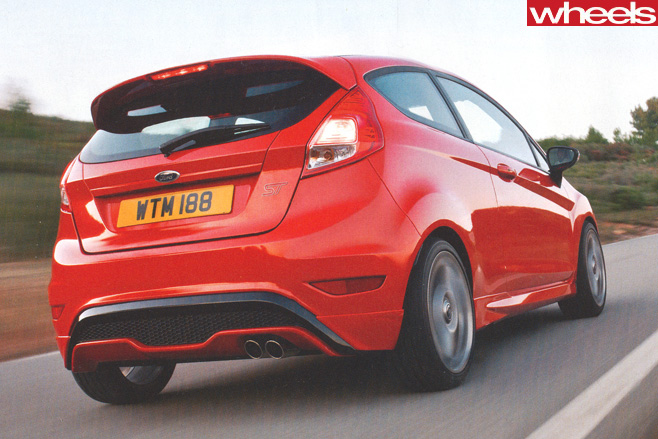 Next year's Fiesta ST - previewed at the Geneva show earlier this year - brings an Ecoboost turbo 1.6 to this time offer the grunt and (here's hoping) character to match the dynamics.

Building on the excellent lower-spec models, the ST's handling should be even more incisive than the XR4's. The Fiesta's steering is the high point - it doesn't get much more slick or direct until you're well into sports coupe territory - and is in good company with the agile, adjustable, entertaining handling.

In ST form, it's dropped 15mm over firmer springs and dampers, with tweaks to both steering hardware and the tuning of the electro-mechanical power assistance. Meanwhile, the braking system is upgraded with rear discs (in place of drums) and bigger piston calipers. With an LSD-like effect from a torque-vectoring system, and three-mode ESC, the ST should really take the fight to Polo GTI and Cooper S. It should have their measure in a straight line, with 132kW, 240Nm and a claimed sub-7.0sec 0-lOOkmlh, packaged with sub-6.0L/100km economy.

Inside it's vibrant; a bit chavvy, with red seat inserts and highlights on dark grey, though the front seats themselves look like the comfortable, body-hugging type.

It'll be built in three- and five-door forms, though it's not known which we'll get (if not both). We'll get? Yep, Fiesta ST (it'll be called that in Oz this time) will follow bigger brother Focus ST, arriving in the second half of next year.

When Falcon production comes to an end, this is the car we'd most like to see replace it (read: the best of the limited options available in the global catalogue).We might add though, that we're in no hurry to see our beloved Falcon killed-off. 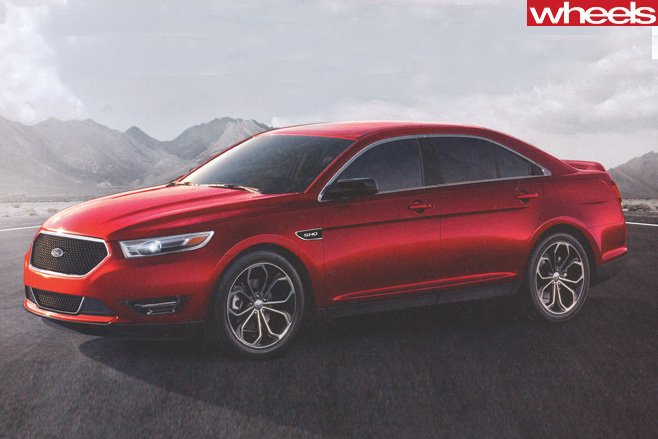 Topping the list of prized Falcon qualities we'll miss is rear-wheel drive, and its associated ability to hang the rear-end. We'll also mourn the passing of the now welldeveloped in-line six, with almost as much torque as it has history. And in its short time on sale, the turbo four-pot Ecoboost has proved itself a highly likeable car that we'd like to see live on.

When the inevitable does happen, the performance flagship of the Taurus range - though not so much the front-drive cooking models - could offer some consolation.

A direct-injected, twin-turbo 3.5-litre V6 is the highlight, with outputs of 272kW and 474Nm. It sends the grunt to all four wheels via a six-speed torque converter auto with paddleshifters, making it quick (in a straight line, at least) and easy-driving, with plenty of traction to punch out of comers. But that's about where the appeal of this Yank ends.

"The SHO at least has power," says Aaron Robinson. "On open roads under big skies it passes the miles with a cosseting aplomb, but in tighter situations the dull controls and general hugeness give you the feeling of threading a needle's eye with a battleship."

Okay, it's little more than a glimmer of hope for the future of large Ford sedans in Oz. Perhaps instead of longing for what might be coming, we should be enjoying what we've got and giving Falcon the send-off it deserves. C'mon Australia, let's exercise our God-given right to do circle-work while we still can.