Three decades after Mad Max brought the blown Falcon to the big screen, we strap into FPV’s supercharged V8 GT for an 1150km maxxed-out mission to meet that iconic ’80s star.

WITH A WHINE, the reign of the turbo six is over. FPV’s V8 GT is under new management, and the new Boss is a powerful straight torquer.

Kick its supercharged 5.0-litre in the guts and it settles into a deep, throbbing idle. Spin the crank into the mid-range and there’s a growing, rich swell of thrust on tap but little else signposting this burbling bent-eight as blown.

Then, offer it a force-fed lungful via a wide-open throttle and you’re shoved down the highway to a maniacal whine from the supercharger as a torrent of torque powers you to an insistent top-end that’s part V8 howl and part blower shriek. The new GT is quick. 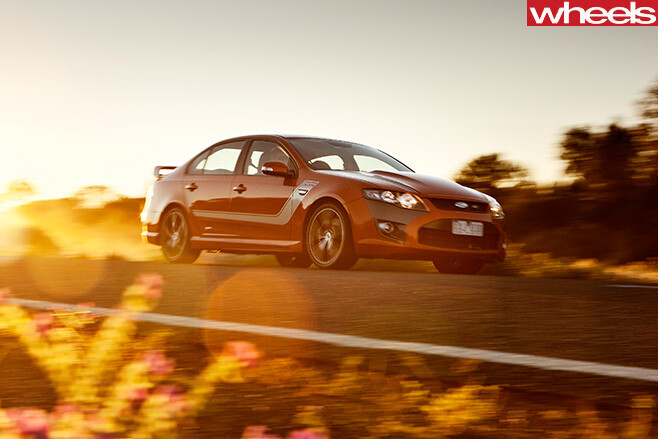 With the V8 GT now quicker than FPV’s turbo six the biggest contradiction in the Blue Oval universe is no longer. But, as with any great Australian road-trip, the car was merely the, um … vehicle that introduced us to places and people, and in other ways it was a 2300km outback adventure full of contradictions.

Let’s start with ‘Burgo’ of Broken Hill, a wily, weathered sometime car wash attendant, sometime bouncer, and former prison screw. He was exactly the sort of character you’d hope to meet in a remote country town, if not at night. 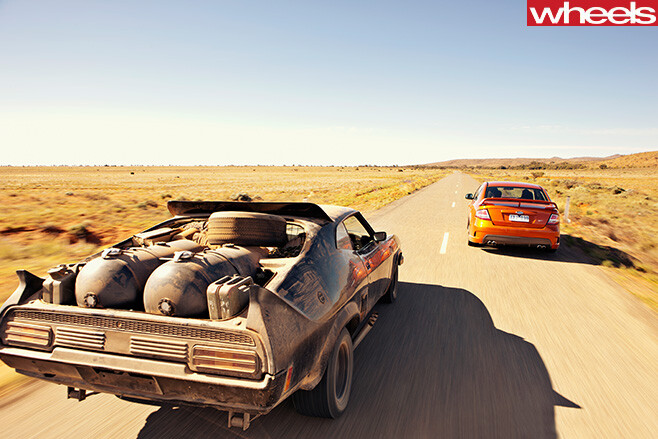 Combine his two specialities of coin tricks and fighting and take them to their natural conclusion, and he could mess you up using only the contents of his wallet. He reckoned I was “slow for a young bloke” because I couldn’t keep up with his coin flipping. Not once he had me in a headlock, anyway.

The contradictions? Well, having turned 31 a few days earlier, the reminder was fresh that my grip on ‘young’ was slipping. While the friendly highway patrol officer we met two days later certainly didn’t think we were lacking in the speed department…

To Adrian and his mates we were perhaps heroes. Petrolheads who’d done the long haul to introduce FPV’s supercharged GT to Australia’s legendary Falcon-based, blown V8 movie star. And to put Adrian’s museum centrepiece on the cover of Wheels. To others, including Burgo, on the other hand, we were no-idea city wankers. Take, for example, the young woman behind the counter at one outback servo. Helpful, but nonetheless not about to entertain any of our flashy Blue Oval rubbish on her forecourt. Bet you’ll never guess which brand her allegiances were with…

Yep, even today the outback’s in some ways still a harsh and hostile place. At least, for us precious, latte-sipping Sydney types.

But if we had little nous with which to take on the great unknown, we at least had the equipment. Let’s take a look beneath the GT’s bulging bonnet. Formerly burbling away between the strut towers was a naturally aspirated, 5.4-litre Boss V8. Wheels’ criticism was always that it lacked bottom-end and, erm … top-end. Okay, so it was a pretty big criticism. In the inevitable comparisons with HSV’s less technically advanced pushrod 6.2-litre it suffered defeat, despite its double overhead cam per bank arrangement, and in part due to almost a litre less swept volume.

In its place is a new, lighter and more powerful roots-type supercharged, still-dohc 5.0-litre V8. The burble remains, but now the bark equals the bite. Power is up from 315kW to 335kW. Far more pointedly, the generous new Boss offers its 570Nm from 2200rpm to 5500rpm, where the stingy old one needed 4750rpm showing on the tacho for a peak of 551Nm. With the sun blazing, Sydney well behind us, and the wide-open expanse of Australia’s outback unfolding, we powered on west through Dubbo, Nyngan and beyond.

It’s this stretch that brought an amusing encounter with a woman driving a purple Commodore SV6. Not happy to sit back and watch some dickhead in an F-O-R-D disappear into the distance, when we passed her she would immediately re-overtake at high speed – try 170km/h – before settling back to a cruising speed slower than ours. Seems Holden versus Ford rivalry is bitter out here.

After an extended cat and mouse sequence we were on our own again. Alone on an endless, arrow-straight road that vanished into a distant shimmering haze. It was just man and machine, in search of ‘guzzoline’. Though, the GT’s not so bad on the juice you have to drive with one eye on the fuel gauge. Our best highway figure (and they were all highway figures) was 10.7L/100km, compared with a single-leg worst of 14.L/100km, because sometimes you need to remind yourself why you didn’t buy the XT. The overall average sat neatly in between, at 12.5L/100km. To put that in context, our Ford Falcon G6E Turbo – which tailed the GT, probably wasn’t driven as hard, but was loaded with photography gear – averaged 10.8L/100km.

There’s clearly a truth-in-naming policy in operation at FPV, because the GT – although rocket-quick when you want it to be – is also the consummate Australian grand touring car. 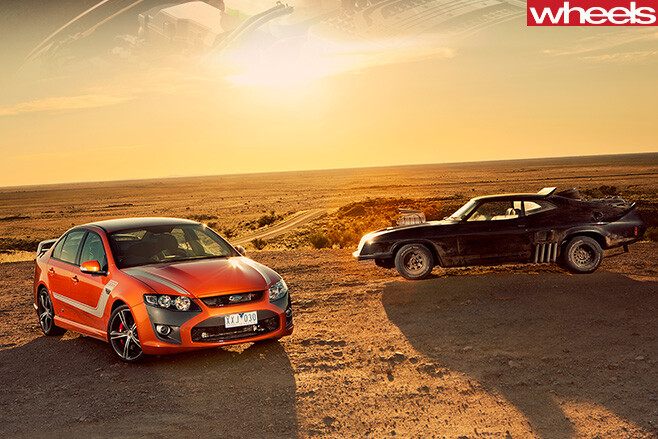 Despite a stiffened-up suspension and low-profile rubber, the ride-versus-handling compromise that’s struck in the big fella favours bump-soaking ride comfort, and that’s just about perfect out here. Some of the larger details of the road surface filter into the cabin, but the primary ride takes the worst in its travel.

We do have a few complaints. Reflections off the bonnet hump can be like staring directly into the sun at certain times of the day. And, c’mon FPV, either ditch the ‘Start’ button, or give us a remote key. Not deal-breakers, but there’s ‘auto’ down but not up for the driver’s electric window (why not auto up and down on all windows, for that matter). Finally, the remote-controlled sat-nav system could be more intuitive. 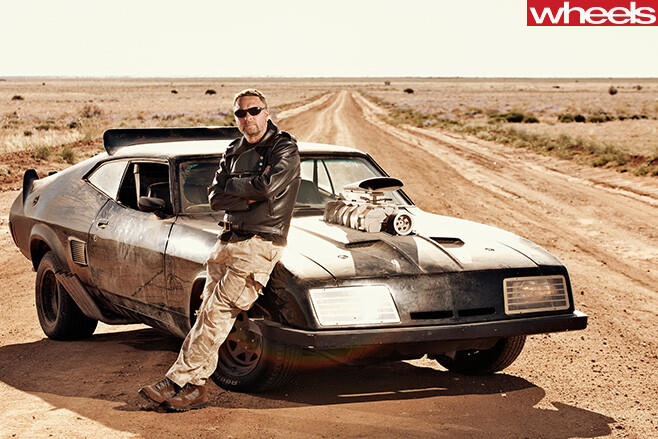 However, building on the inherent chassis comfort are the body-hugging front seats wrapped in an equally grippy fabric that looks like it’ll wear well, a chunky, contoured leather wheel with clear, easy-to-use audio and cruise buttons, frosty air conditioning and crankin’ sound to satisfy your inner Ayatollah of rock ’n’ rolla.

Labelling it a GT in the true sense of the badge is not to say there isn’t some ‘HO’ lurking within. The Ford Falcon chassis is a beautiful, well-balanced, trustworthy thing. The tiller is allied to a light, slick steering system that offers up ample feel; the well-modulated brake pedal to powerful, responsive Brembo brakes – six-piston calipers clamping 355mm ventilated discs up front. And the muscular blown bent-eight is mated to the ever-smooth and intuitive six-speed ZF autobox. It all comes together as a terrifically well-sorted muscle sedan that works a treat on Aussie roads.

But a hard drive reveals weaknesses. Ask it to change directly quickly, and there’s slight rubberiness of response, rather than the crispness you might hope for. Increase the speed with which you tackle undulations and the normally controlled body begins to float. And as the front tyres near the limit of adhesion – sometimes at a surprisingly early stage – there’s a degree of steering kickback.

Back cruising, the palette either side of the coarse chip is increasingly an iron oxide reddy-brown punctuated by the ever-present purple blight of Paterson’s curse as we jet towards Broken Hill. Some time later, about 25 kays north-west of that isolated mining town near the South Australian border – and about 1150km from Sydney – we’d arrived in Silverton. And didn’t they roll out the red carpet. The woman who ‘served’ us in our ‘chosen’ food establishment was the catering industry’s equivalent of Barbara from Bank World. I say ‘chosen’, because it was either the world’s weirdest hamburger here – a beef patty with gravy on a scone, served with a side fruit salad and a scowl – or a hot dog at the pub. Okay, so we took too long to place our order. Sorry.

Meanwhile, the reception at the Mad Max Museum couldn’t have been more welcoming, with Adrian, wife Linda, friend Ian (who worked on Mad Max 2) and his son Dustin some of the nicest, most enthusiastic people you’re likely to meet. 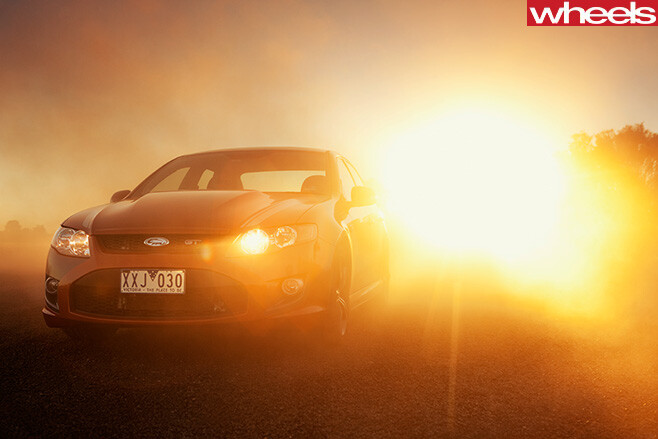 Loquacious Briton Adrian developed an obsession for Mad Max after he first saw the movie and its sequel as a teenager in 1982 back in England. A panel beater by trade, he built his own Interceptor based on an XA Fairmont, before moving it, an extensive collection of memorabilia and his family from Yorkshire to the Australian outback in 2006, setting up the Mad Max Museum in Silverton earlier this year.

Those long hours and big kays were worthwhile when Adrian and his Interceptor crested the hill at our photo location. All matt black and menacing crouched over fats, whirring blower casting its evil shadow over the bonnet in the dying amber sun.

Up close, it’s the duck’s guts, with its wedgy nosecone, flared arches, roof spoiler, side pipes, twin tanks and jutting Weiand blower complete with obligatory in-cabin supercharger switch. It doesn’t quite have 600 horsepower through the wheels. Standing there, in that starkly beautiful outback setting where they filmed the opening scenes of Mad Max 2: The Road Warrior, the Interceptor hulking evilly on the roadside, it was like being on set for that epic 1981 sequel. It was about then Ian leant in close and said with near religious reverence, “See that road there, that’s Fury Road.” Like most sequels, Mad Max 4: Fury Road, which is currently in-the-works, will be greeted with great anticipation. But it also has plenty to live up to.

You could perhaps have said the same of the new GT. But with the supercharged muscle to blow the turbo six into the weeds, FPV’s V8 hero gets star billing.

Curator of Silverton’s Mad Max museum Adrian Bennett (right) is known to bet the museum itself he can answer any question about his beloved flicks, says wife Linda. A Mad Max tragic since he saw the first two movies in 1982 in his native England, he moved his family, Mad Max memorabilia, and Interceptor (which he built himself) to Oz in 2006, before opening the museum earlier this year. Chief among the attractions are photographs, scripts, props and an extensive collection of vehicles. You’ll find the museum up the hill from the pub (can’t miss it) where Adrian’s always keen to chat. Looks the part driving the tough-as Interceptor, too.

Some of you lot wrote in telling us our GT-P figures last issue were too slow and that we were a bunch of jokers. Shattered, we lined up our automatic GT at Sydney Dragway’s Christmas tree for a second crack. Our best launch resulted from a momentary stall-up on the brake in second gear. The GT let fly to the combined howl of tortured tyres and mechanically supercharged V8 to lay down a scorching 12.92sec quarter at 181km/h. Our Vbox figures below – on the same run – are four- tenths slower due to a dragstrip timing phenomenon called ‘rollout’. So, can FPV’s blown V8 run a 12 at the strip? Yes. Can it do a 12 on a Vbox? Almost.