HIS photography features in state and national galleries, but Aussie Jeff Carter was also a talented writer who penned compelling features for Wheels about the Porsches he loved to steer ... after importing them on the cheap.

Jeff Carter is one of Australia’s great photographers, with his work featuring in the National Gallery of Australia as well as in state galleries and museums. But Carter was better known to Wheels readers for his love of Porsches. His first, the final 356C imported to Australia, was bought on expenses from National Geographic magazine, for whom he wrote at the time. But his masters objected to paying for a “hard item” and he never wrote for them again.

He did buy more Porsches, though: when its tyres were worn, the 356C was replaced by a 912 – the four-cylinder 911 – followed by a 911E. Carter worked out that if you bought a 911 on tourist delivery in Germany and stayed with the car for 15 months, you could import it and bypass the 45 percent duty, near-halving the cost of the Porsche. In 1976, 1977 and 1978, he wrote six stories on his Carrera 3.0-litre for Wheels, helping to cover his 15-month holiday. Readers loved them, though Jeff’s efforts always put a large hole in the magazine’s budget. The bloke knew his worth: the terrific, wonderfully readable words were always accompanied by great photographs, which he insisted be returned each issue. 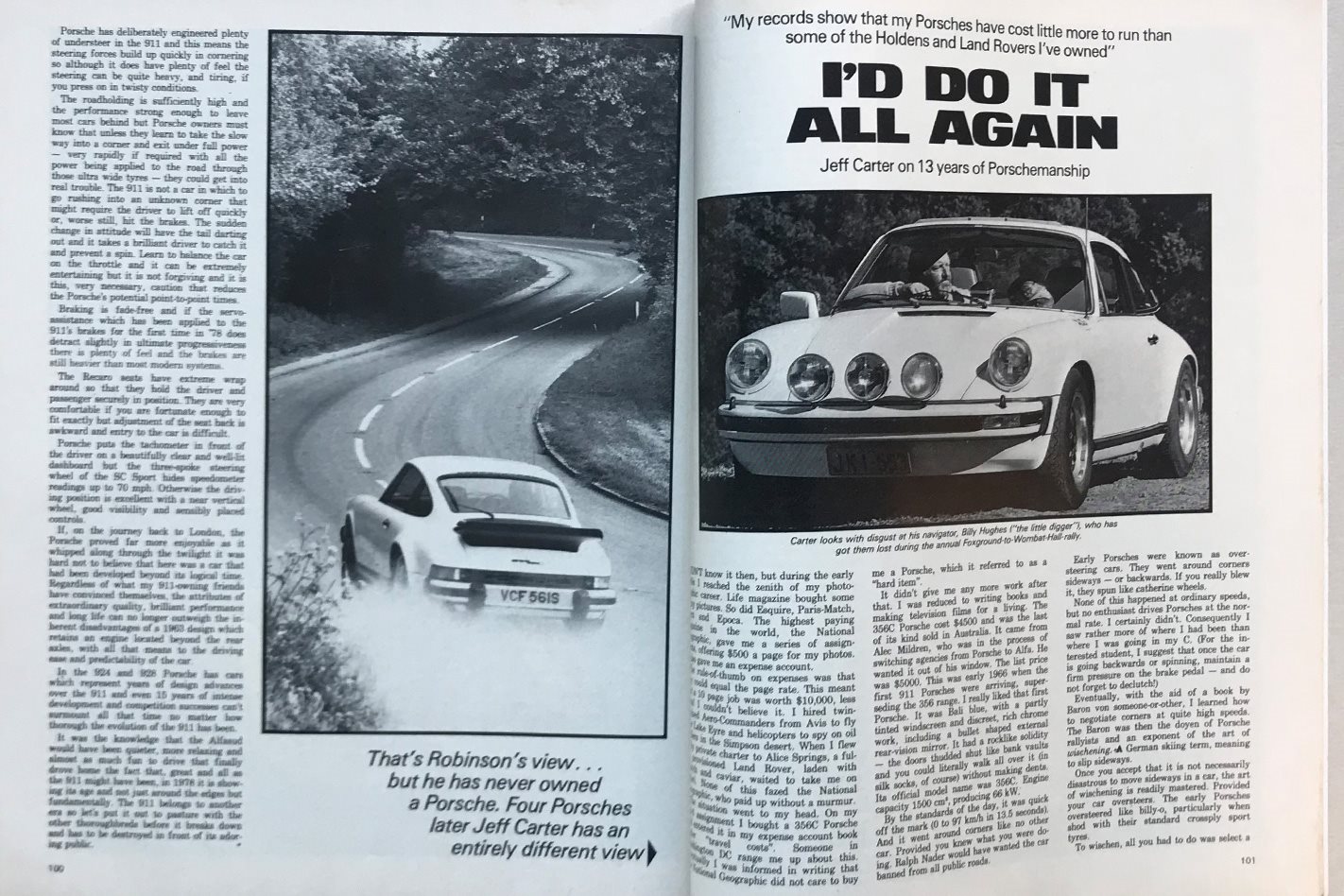 This highly entertaining tale concerning Carter’s four Porsches, published in December 1978, acted as a favourable sequel to my highly critical drive story on the 911SC 3.0 (embarrassingly now, I wrote that the 911, “belongs to another era so let’s put it out to pasture.”) We’d agreed to a word count, but Carter couldn’t help himself and, as always, supplied an extra 1250 or so words. Of course we paid up and ran them all: cutting his words was not something an editor did lightly without incurring his considerable wrath. Besides, his compelling narrative made it all but impossible.

Jeff quickly discovered that Porsche depreciation was minimal, that they were remarkably reliable as they were superbly built, and they cost little more to run that his Holdens or Land Rovers. They also taught him about driving and, especially the 356C, wischening, a German skiing term for ‘slip sideways’, or, in car-talk, oversteer.

He explained: “All you had to do was select a gear that left you with plenty of reserve acceleration and then go into the chosen corner much too fast. Quite small but rapid sawing motions of the steering wheel and firm acceleration controlled the resultant slide. The worst thing you could do was to ease off on the loud pedal. Any hesitation with the right foot causes the car to swap ends or spin, even if you backed off only by the thickness of your socks.”

Despite the publicity Carter provided Porsche, he was at pains to explain that he never received, “any form of consideration” from the dealer or the factory. Once, he claimed that Hamilton’s threatened legal action over what it believed were defamatory remarks about one of the Porsches. 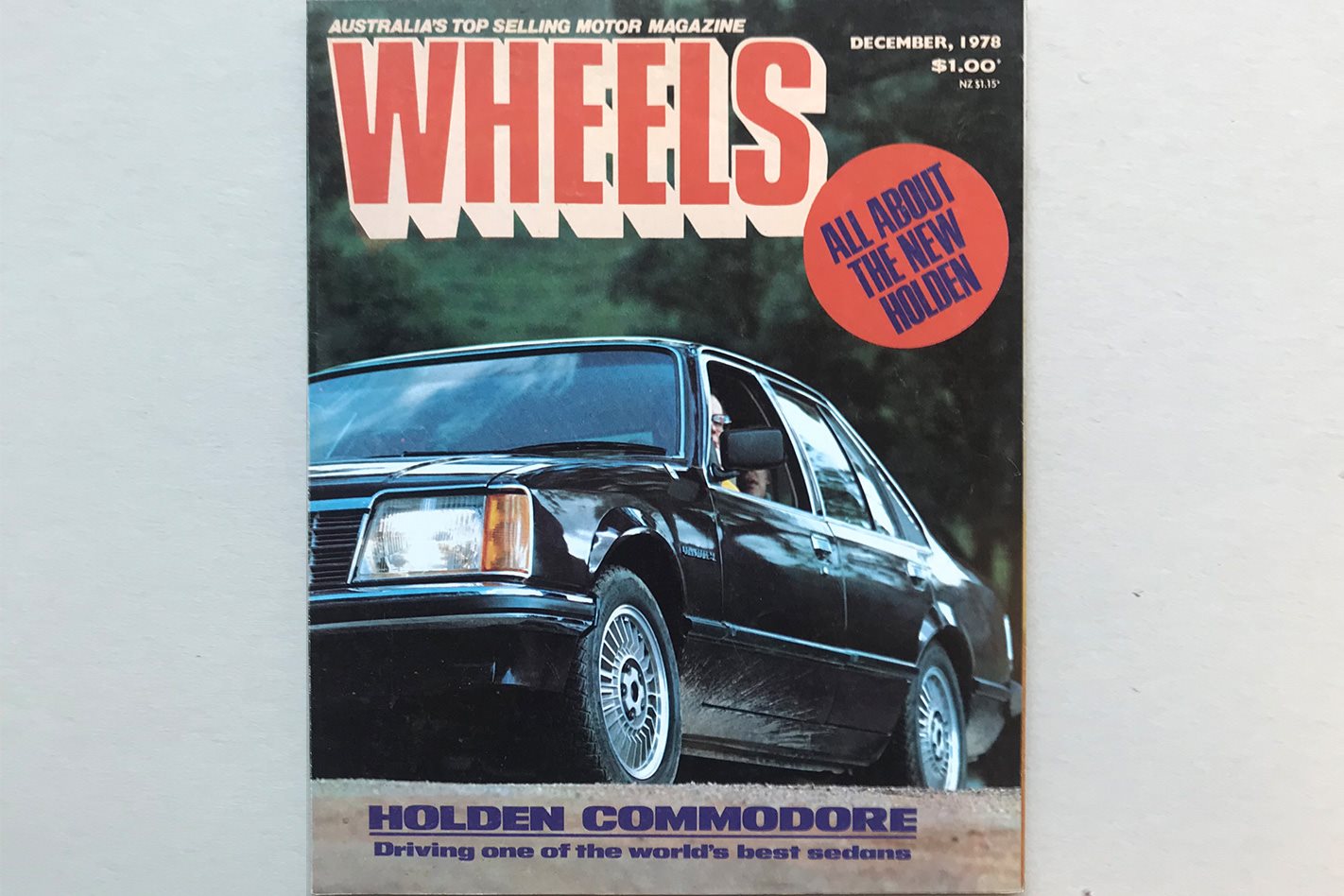 “My praise for the marque is inspired solely by my admiration for the cars,” Carter wrote. “No slings have ever come my way, only arrows.”

Carter wanted a steady job after the birth of his first child, and in 1949 became the editor of Outdoors and Fishing. As a result, he was in on the birth of Wheels and became friends with its first editor, Athol Yeomans. He then resigned to travel the inland of Australia, writing books and articles – occasionally for this magazine – all backed by his evocative photography. The Porsche era ended when falling import duty meant there was no point to buying a car in Germany and thus made the cars “too bloody expensive” in Carter’s words. He died in 2010, aged 82.