On March 31, 1998, Porsche built the last air-cooled 911. This was a point of historical significance to some people, as it left the Volkswagen Beetle (still being produced in both Brazil and Mexico) as the last air-cooled rear-engine car on earth, right? Smile and say, "Wrong." There's still one other outfit holding the rear engine fortress - one that's been at it longer than even Volkswagen, too.

Bouncing Czech was first published in Wheels in August 1998.

The Bouncing Czech - August 1998
View this article in its original format in the archive.

Nestled away in the eastern end of the Czech Republic is the Koprivnice headquarters and main plant of Tatra a.s. The company is probably better known worldwide for its range of fascinating heavy diesel trucks – big air-cooled diesel V8s, V10s or V12s with all-wheel drive and tubular backbone chassis featuring fully independent suspension – than for cars even though the outfit’s been building cars since 1897. The company hasn’t been without innovation in the cars either – early on, Tatra introduced the pedal-operated brake (despite outcries of the potential dangers of such a feature in the press of the day). By the early ’30s Tatra’s formula had become well-established – front-engine, rear-drive cars with horizontally opposed air-cooled engines and independent suspension on all wheels (even if it was via swing-axles at the rear end). In 1933 that was to change. 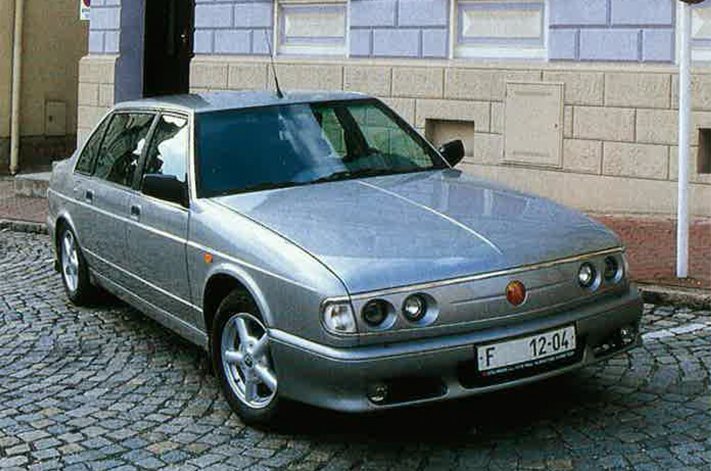 Technical director Hans Ledwinka had developed a large (3150mm wheelbase and overall length more than 5m) rear-engined car adhering to the aerodynamic theories popular in the 1930s. Powered by an air-cooled V8 of 3.0 litres, the model 77 rattled a number of cages when it appeared at the Prague show in late 1933.

With a top speed of 140km/h it was fast by the standard of the day, even though the kerb weight of roughly 1800kg meant it was no lightweight. Subsequent versions had larger and more powerful engines (3.4 litre), and handling that was even more suspect.

In 1937 the 87 was introduced, notable for having weight pared by more than 400kg, a new engine which reverted to a 3.0 litre capacity, as well as a wheelbase reduction to improve handling. With a top speed just shy of 160km/h, improved dynamics were probably a good idea.

Tatra kept building air-cooled rear-engine cars throughout Czechoslovakia’s ‘experiment’ (as some of the people we recently talked to referred to it) with socialism to the present day. Tatra’s latest model, the T700, is a heavily facelifted version of the Vignale-styled T613 of 1970.

The mechanical package is pure Tatra; an air-cooled twin cam V8 displacing 3.5 litres and developing 147kW at 5700rpm, and with peak torque of 300Nm coming on stream at 4000rpm, and it’s coupled to a five-speed manual transaxle. No automatics here. The T700 diverges from Tatra tradition solely through the use of Bosch fuel injection. One of Tatra’s engineers mentioned that a more powerful 4.3 litre version of the eight is under development, with planned introduction sometime in 1999. Hey, 4.3 litres. Same as a Mercedes E-class.

Yes, but in fact the Tatra is closer to an S-class than it is to Mercedes’ mid-ranger, at least as far as size is considered. Whoever said that size doesn’t count never worked on the T700. Looking at the Tatra from a distance, the proportion belies the T700’s mass, especially if there are no people near the car.

It’s difficult to realise that the wheels are 16-inchers, for example. Riding on a 3130mm wheelbase (a mere 20mm shorter than Tatra’s first rear-engined car of a mere 65 years ago) the T700 spans an impressive 5135mm from bumper to bumper and, as a side view shows, a lot of the car’s length is in the rear compartment.

Because the ‘h’ point is relatively high in the rear (you are sitting atop the petrol tank, forward suspension pick-up points and engine mounts – higher than the front seat occupants) and because there’s a lot of glass (including quarterlights in the C-pillars) the cabin’s airiness makes the T700 seem even roomier than it is. In terms of dimensions the length, legroom and width are sinfully good. Seat comfort is also well above the norm with plenty of lateral and thigh support. Tatra also offers electrically adjustable Recaro rear seats as an option. Where the big Tatra comes up short is with headroom. Lanky Mr Robinson found that the high ‘h’ point meant that his scone was getting close to the roof. Real close. Entry and exit through the mile-long rear doors is a snap for any full-blooded humanoid.

Exterior styling is based on the Vignale-styled 613 and is professionally done. The six-light upper means there’s a certain late ’60s look about the centre body but the car works pretty well for a large, rear-engined sedan. Not that there’s a lot of competition in the genre.

As you’d expect for a luxury car the interior fittings are pretty good. The T700 we got to drive had the basic cloth interior (leather’s available as an option) but with enough walnut on the instrument panel to make you think you were in something British. The workmanship was generally good, though it could be selectively spotty. The seats, for example, are superbly done with bloody perfect French seams and the sort of needlecraft you’d expect in one of those Parisian haute couture dresses with a five figure price-tag. Then you take a glance at the dashboard and you notice the leather covering for the dashboard (and it’s real leather, not vinyl) doesn’t seem to be quite so meticulously crafted. There are a couple of unique touches (surprise, that) like steering column stalks controlling lighting and wipers which look – and feel – like something from the Honda parts bin, and lashings of blue velvet (maybe those at Tatra are all David Lynch fans) around the instrument binnacle and HVAC registers. The air-con’s standard and it’s of the climate control variety. 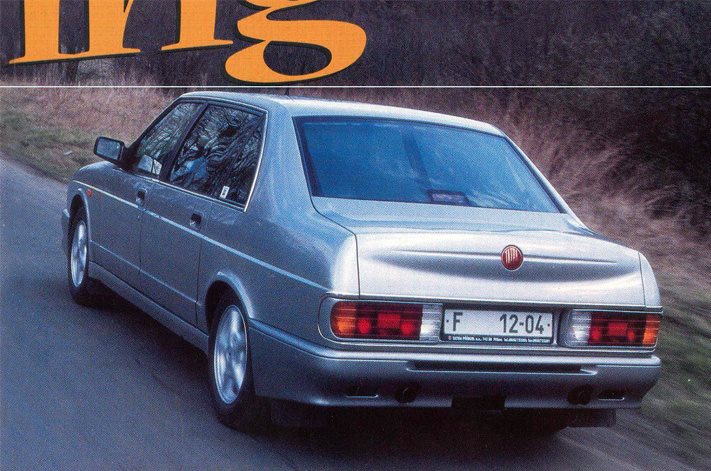 Down in the centre console is the shifter for the five-speed transaxle. It wasn’t nearly as ropey as we remembered rear-engine cars to be, nor as much as we expected something to be with such a long distance between shifter and transaxle A twist of the key and there’s a smidgen of familiar V8 burble tinged with the slightest note of combustion resonance from the heavily finned alloy banks of the bent eight. When the boot lid (which in this case is really the bonnet) is opened the ’whhhrrblurrzzzz’ of the cooling fan seems to grab your over the rest of the engine’s sounds. Windows up and air con ‘on’, the Tatra’s quiet as far as engine noise is concerned.

Dip the clutch (which isn’t particularly heavy but has a dead feel), slip the shifter into first (which is down and to the left), apply a touch of throttle as the clutch is lifted, and we’re on our way. Gearchange effort is reasonable and more precise than we were expecting – no mean feat considering the distance back to the transaxle.

The steering is power-assisted (the power steering pump and air-conditioning compressor sit behind the engine about as far aft in the Tatra as anything can without residing on the bumper) with surprisingly good feel and reasonable weighting when puttering around town. Performance is better than expectations when you realise that the T700 we drove was tipping the scales at nearly 1900kg and is moved by 147kW. That’s a power to weight ratio a few grams below the 13kg threshold. That’s $14,000 econobox and Toyota Prado territory. Still, Tatra’s manufacturer’s figure of 10 seconds from 0-100km feels reasonable as does the claimed 230km top speed.

But cruising at 230km in the Tatra might require balls of titanium The T700 feels stable and pleasant around town, but as speed increases it becomes harder and harder to ignore the fact that this is a heavy rear-engined car. Tatra’s Koprivnice main office and works has a large test facility (built primarily for the company’s large trucks) but there’s a moderately banked circular track (laid across the slope of a hill with definite ‘uphill’ and ‘downhill’ sections) where we got our first taste of this Czech treat And it was, er, memorable.

As speed increases the nose of the T700 lightens appreciably. Up to and including the 150km/h threshold, all is fine. More or less. But as you approach and then exceed the old ton the Tatra starts to get light in the nose and heavy in the tail. The downhill sections of the track were especially interesting. This writer and colleague Robbo seemed to experience comfort levels in the Tatra that rated below that of genteel British cameraman Ian Dawson, who also took a turn at the wheel. Perhaps Dawson’s period of time as a Volvo owner has made him feel indestructible.

Out on the road the car also starts to feel familiar in an unfamiliar way when you put the boot in on a twisty section. Sort of like a two-tonne Porsche 911, if such a thing is imaginable. It’s not treacherous as much as it is slightly spooky and with time we’re certain that you’d get used to the Tatra, just like an old 911.

Production of the T700 runs at about 20 cars per year making this one of the most exclusive series-produced cars on earth. At Tatra, T700s are hand-built in the R&D shops. Sadly there’s no factory-sponsored export of Tatras to Australia planned. There was an abortive attempt to sell the T700’s predecessor in the UK a few years back – the British importer-to-be even provided the seed money for engineering right-hand drive as well as the Porsche-developed injected version of the Tatra bent eight and some suspension tweaks to tame the beast, plus the fellow who designed the Tatra V8 went to work at Porsche afterwards. But it all came to nought. It’s certainly an uncompromising car – which means it isn’t for everybody – and the name, when it is known, carries some negative baggage – Czech Republic President Havek won’t ride in one because the old Tatras were used by Czechoslovakia’s secret police, and in his former life as a political dissident he got chauffeured in them.

Sure, the Tatra’s a big, heavy rear-engined car with what might be charitably described as ’interesting’ dynamics. Nonetheless, we’re glad it’s there enriching the global car park If only at the rate of 1.67 T700s a month. 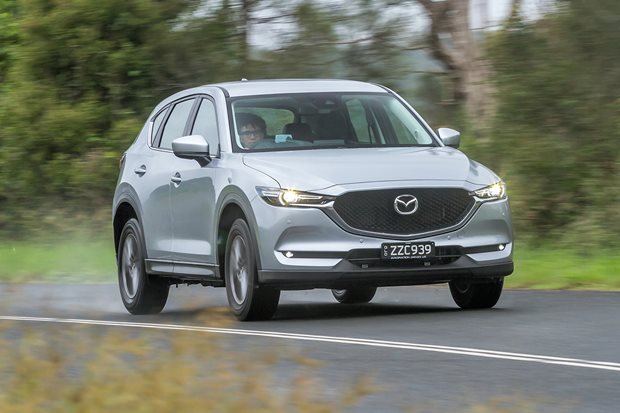 The first generation Mazda CX-5 was an impressively stylish and dynamic addition to the SUV segment. The second-generation neatly picks up where the first left off. 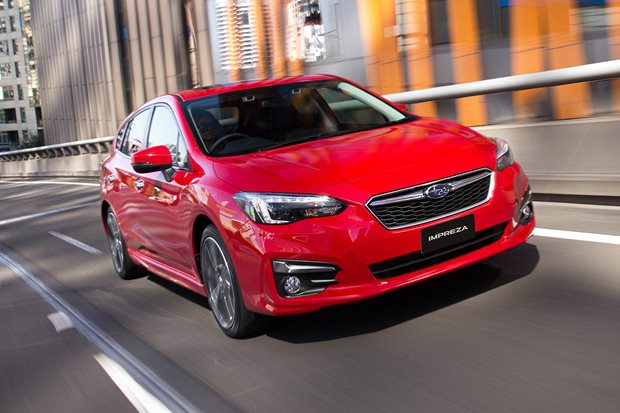 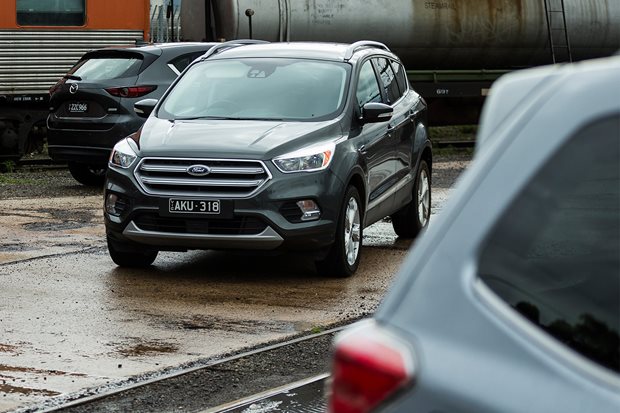 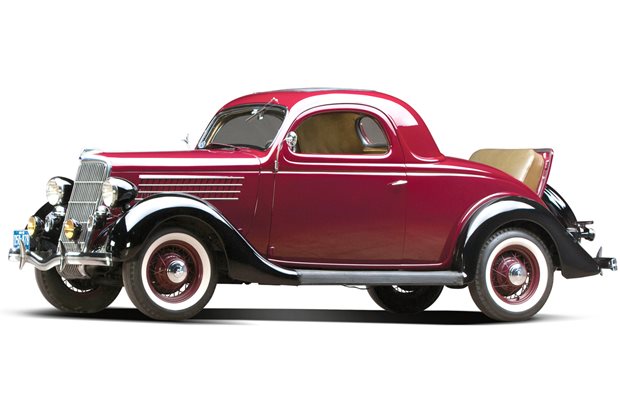 While the Model T is Hendry Ford's most famed creation, the 1932 Coupe was not only Ford's first V8, but arguably the world's first affordable V8.