California. A land where celluloid dreams are built or buried, the technology capital of the world, Uncle Sam’s most populous state, and the name of Ferrari’s first turbocharged road car since the F40 almost 30 years ago.

With its Mediterranean climate, winding coastal highways and challenging canyon backroads, where better to test Maranello’s new California T, a sports-luxury GT that ushers in a new era for the world’s most famous fast car maker?

Sadly, the MOTOR budget doesn’t stretch to trans-Pacific trips, so we set our sights a little closer to home. Ideally, somewhere with a similar mixture of sun, surf and sand to the US West Coast, and given the California T’s turbocharged nature, a place where artificial enhancement is a way of life. Welcome to the Gold Coast. 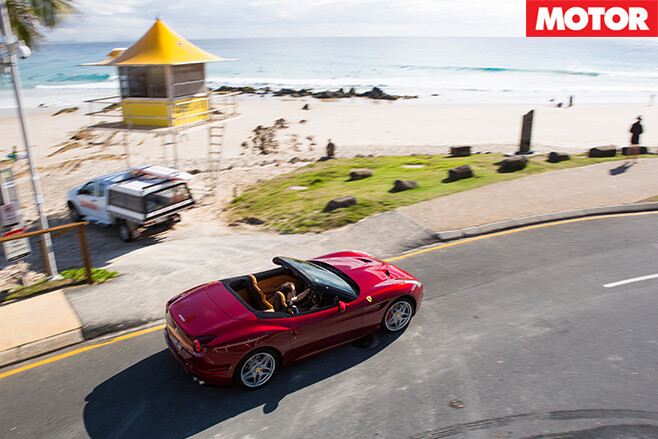 But we’re off to a bad start, as the weather is more Melbourne than Mooloolaba and photographer Nathan Jacobs has missed his flight north. Despite his fiancé being a school teacher, NJ has forgotten it’s the first day of school holidays – “I wondered why she was still in bed” – and as such, Melbourne Airport has descended into pandemonium, with flocks of metal birds migrating north to warmer climes.

Already in Brisbane, I’ve time to kill, which is less of an issue with a Ferrari showroom to wander around. A pair of 458 Speciales ooze perfection, while a Rosso-with-tan-interior 599 GTB looks conspicuously good value at $280,000. And it seems the passing of a decade has turned the 612 Scaglietti from an ugly duckling into a Prancing Swan, especially in black.

Anyhow, to business. A walk around the Cali T with sales executive Franco Giammattei highlights that for all Ferrari’s recent giant strides in performance and handling, it’s the interior where perhaps the greatest advancement has taken place. Peering inside the aforementioned 599 – only one generation old, remember – reveals HVAC controls that would appear cheap and tacky on a base model Fiat Punto, let alone Ferrari’s flagship GT. The California is a big improvement. Bluetoothing your phone takes seconds, not minutes, and there’s the ability to pair your iPhone to access music and sat-nav through Apple CarPlay, should you wish to depart with $6790 for the pleasure.

There’s a beautiful aroma of leather, everything you touch appears solid, and the open cabin architecture creates a spacious feel. So often the driver is hemmed in to the point of claustrophobia, but the Cali T is a welcome exception.

The driving position is excellent, however the optional ‘backbone’ chairs themselves are very firm with little under-thigh support, though they’re certainly better than the rear pews, which would struggle to accommodate even small children in any comfort. In a weird ergonomic quirk, the steering wheel is almost octagonal in shape yet accommodates your hands at the ‘quarter-to-three’ position almost perfectly, and in modern Ferrari fashion, it now houses all the major controls including lights, wipers, indicators and the all-important starter button.

Press and hold the red lozenge and the 3.9-litre twin-turbo V8 fires into life with a blare. We’ll come back to the controversial issue of noise, but thanks to their flat-plane crank configuration Ferrari V8s have never sounded particularly inspiring at idle.

With snapper NJ finally turning up, it’s an hour’s trek south to Surfers Paradise, but the California T makes light work of the motorway haul. The new California is sharper and more focused than its predecessor, but Ferrari’s latest SCM3 magnetorheological dampers provide excellent ride quality, so it’s worth ticking the $8970 ‘MagneRide’ box. Likewise, the wider reach of the new turbo engine has allowed longer gearing to be installed in the seven-speed dual-clutch transaxle, around 2000rpm showing on the tacho in top gear at 110km/h.

This relaxed gait allows miles to disappear quickly, though as is often the problem with fast cars on Australian roads, the California can make them disappear a lot faster. With a maximum of 755Nm available in seventh gear, it only takes a slight relaxation of your foot to add 20 or 30km/h without really noticing.

It’s in Surfers Paradise that the ‘Ferrari effect’ begins to make itself known. This new California is a much more attractive shape than its predecessor – lower, leaner and more aggressive – but without that exotic supercar ‘wedge’ profile, I assumed it would more or less fly under the radar. 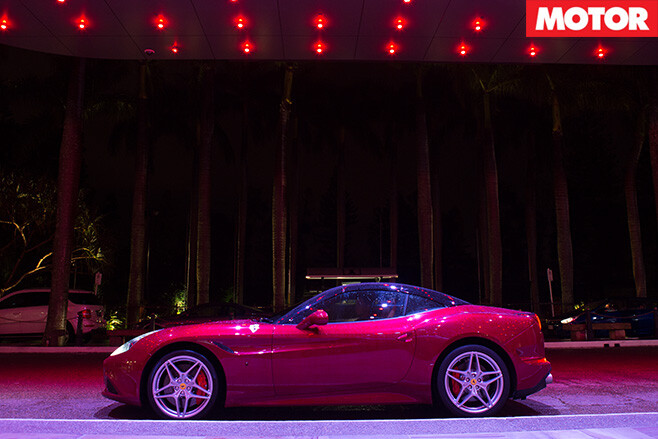 That assumption underestimated the incredible power of the Prancing Horse badge, and for the next few hours the California T is the focus of the smartphone paparazzi as we complete photography along the Surfers ‘strip’, the half-illuminated Hard Rock neon guitar perhaps a metaphor for a location that has lost some of its lustre.

Shuffling back and forth for Jacobs’ camera does highlight a couple of drivability issues with Ferrari’s seven-speed dual-clutch ’box. For smooth take-offs, it really must be treated like a manual, with a gentle introduction of the throttle to allow the clutches to take up.

Once rolling it shuffles gears of its own accord well enough, though every now and then the first-to-second change engages with a thump and it occasionally feels like the computer doesn’t provide enough revs on downshifts. 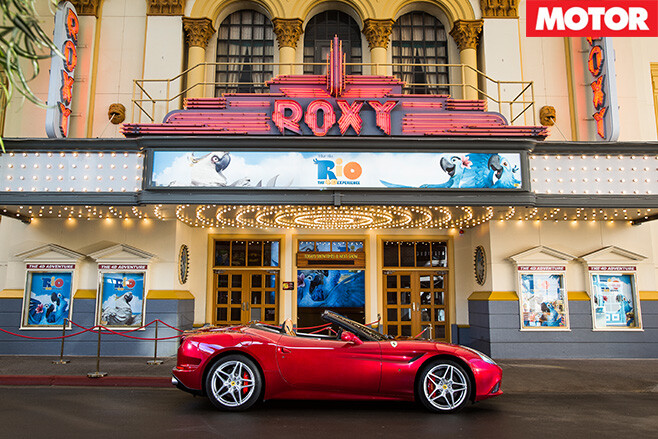 The beautiful carbon shift paddles are also attached to the steering column, however their length means you’re rarely grasping at air and their long throw adds a far greater sense of occasion to changing gear than the button-like ‘click’ of other manufacturers.

Thankfully, the next morning dawns bright and clear, as today we leave the high rises behind and head for the Gold Coast hinterland, but first it’s a quick stop at Movie World for more photography (California, Hollywood, you get the gist) before it opens to the screaming masses that delayed photographer Jacobs’ trip north yesterday.

Our route takes us south over the NSW border then turns inland into the sugar cane plantations surrounding Murwillumbah. The road is wide and smooth and the corners well-sighted third-gear sweepers, but the California feels oddly restrained. Unlike its sportier F12 and 458 siblings, the Cali T’s steering-wheel-mounted manettino switch offers no Race setting, leaving a choice between Sport or ESC Off for enthusiastic driving.

The latter feels like a step too far in someone else’s $400K Ferrari at this early stage, but the Sport ESC calibration is ridiculously cautious, removing large portions of the 412kW the minute it detects any hint of wheel slip.

It’s frustrating as it’s abundantly clear there’s plenty of talent in the California chassis. At over 1700kg it’s no featherweight, yet the car feels agile and light on its feet with plenty of lateral grip, though the steering is both fast and very light in its weighting, which means your inputs need to be very precise to not upset the car on turn-in. Likewise, the massive Brembo carbon-ceramic brakes are immensely powerful, but their sensitivity requires a delicate foot to avoid passengers headbutting the dash. 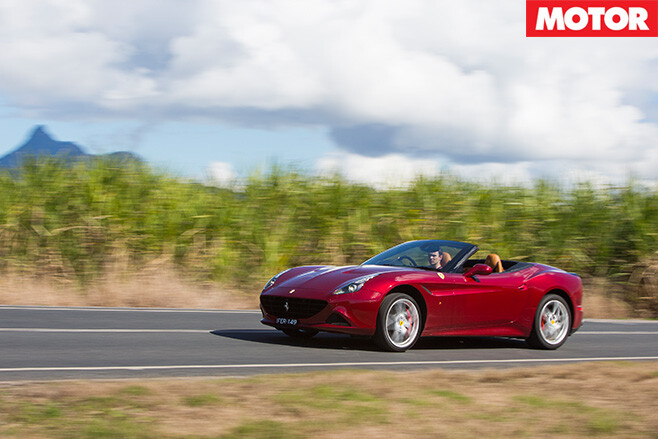 As confidence builds so too does our pace as we climb back across the state border then descend towards Numinbah Valley. Stung by criticism that previous Californias haven’t been ‘real’ Ferraris, this new model benefits from stiffer suspension settings, quicker steering and the engine has been lowered 40mm to improve the centre of gravity.

The California T mightn’t be the performance star of Ferrari’s range, but it’s still massively fast and it’s surprising how much of the speed can be used on these tight, twisty and bumpy roads. So often these new-gen turbo cars – BMW’s M models come to mind – are a real handful due to the massive torque they produce, but while the California T’s twin-turbo V8 produces a massive 755Nm, the full hit is only available in seventh gear. Manufacturers limiting torque in lower gears is nothing new, but Ferrari takes it a step further by creating a torque map for first and second then individual maps for gears three to seven, expertly matching torque to available traction.

It works brilliantly, the rear tyres refusing to yield even exiting corners under full throttle in second gear, but it does result in the odd sensation of linear acceleration, the push in the back feeling equally strong in third due to the extra torque available.

Ferrari has gone to extraordinary lengths to replicate the sensation of a naturally aspirated engine and claims “instantaneous throttle response”. In reality, it’s not quite as crisp as the best atmo engines, but the biggest giveaway it’s not breathing pure atmosphere is simply the quantity of performance available. But what of the all-important sound? Exhaust noise is muted compared to something like a 458, but roof down, fanging through overhanging trees, there’s still plenty to keep you entertained. It could be improved with a little more theatre; every now and then a vicious CRACK escapes on full-throttle upshifts, and more of that wouldn’t go astray.

Perhaps most importantly, however, there is a reward to extending the 3.9-litre twin-turbo V8 to its 7500rpm cutout; in fact, there’s plenty of reward in driving the California T harder than most owners ever will. At road speeds understeer doesn’t appear to exist, and it takes real commitment or provocation for the rear to break free. 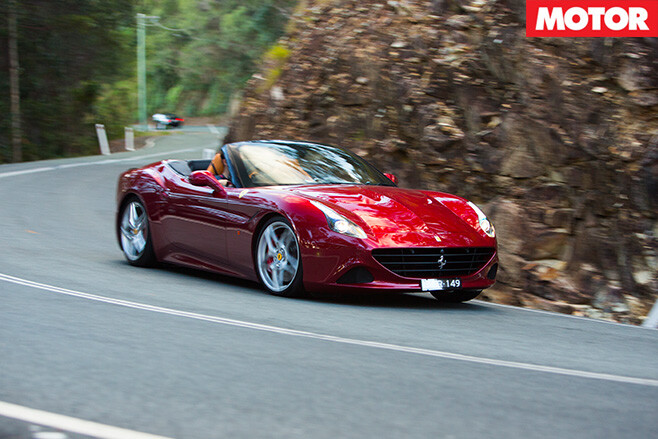 The California T has copped a bit of a bashing in overseas press, but as a drivers’ car it would make mincemeat of the likes of the Aston Martin DB9 Volante or Maserati Gran Cabrio. And even something like Mercedes’ SL63 AMG feels neither as wieldy to drive nor anything like as special as an object.

A 911 Turbo S convertible would offer a much sterner test dynamically, but to the world at large it’s just another 911, whereas deserved or not, a Ferrari still carries an air of rock star about it.

At the outer edges of the handling envelope a few cracks do appear, however. Through large compressions the nose will occasionally kiss the ground with a wince-inducing scuff, and it can be difficult to feel where the California’s limits lie, primarily due to the overly light steering. A version of the 488’s spookily prescient Side Slip Control would provide a handy safety net, and no doubt will be included on the next-gen California T due in 2017. 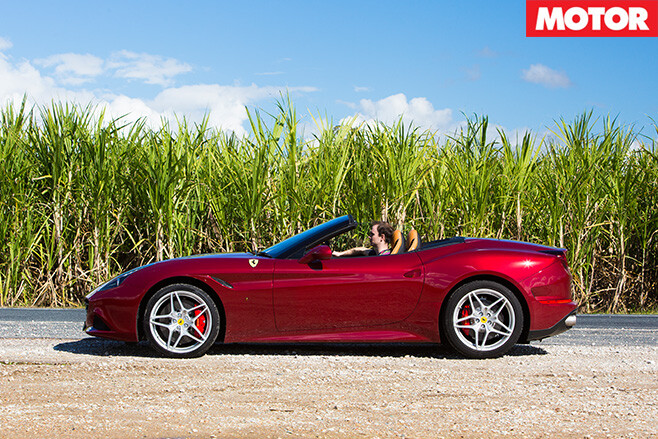 There’s also the issue of price. While a standard California T is a competitive $409,888, a swathe of options lifted our test car to a whopping $549,387 before on-road costs. Admittedly, aesthetic additions accounted for much of the increase, including the $20,500 California Rosso paint and $12,500 contrasting black roof, not to mention the $40,000 worth of carbonfibre and alcantara adorning the interior.

An extra $2700 for red brake calipers, $1400 for sports exhausts and $1255 for a yellow tachometer does seem a little excessive, however. Still, it doesn’t seem to deter customers and goes a long way to explaining Ferrari’s industry-leading profit margins. 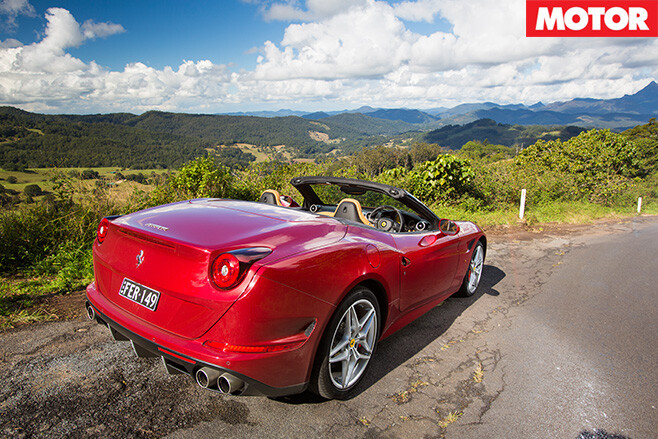 The original California was a little like the glitzier parts of its geographical namesake; superficially flashy but lacking substance, it could’ve been called the Ferrari Beverly Hills. The arrival of turbocharging has added a welcome dose of performance, but more importantly the chassis revisions mean the California T can stand tall among Ferrari’s prodigiously talented sportscar range as a true drivers’ car.