Ford’s new challenger is at long last trim, taut and terrific. All this, however, may have come one model late.

First published in the May 1964 issue of Wheels magazine, Australia's best car mag since 1953.

ONE new model-change swallow does not necessarily make a motoring magazine's summer, but the XM Ford Falcon has gone a long way toward making 1964 a more pleasant year. Too many road tests carry the atmosphere of this-new-model-is-marvellous-Iast-year's-was-a-dog,'' but this is justified with the new Ford six-cylinder. It does, however, deserve the criticism that the changes should have been made one model earlier. If this had been done, the company would not have faced its long uphill climb to regain the heights of favor; it is an unfortunate axiom that it takes only a few months to turn a public against a car, but a few years to lose that reputation.

The XM model is the result of immediate action by Ford's new managing director, affable, steel-minded Wallace Booth, whom we described in WHEELS February as "Ford's New Broom." It took him only a few weeks, apparently, to realise that the Falcon lost acceptance in Australia because of poor quality control and lack of engineering application of the peculiar demands of Australian conditions. He must also have seen that the worst thing the company could have done would have been to use the 1964 US Falcon as the Australian 1964 model. So the XM is more Australian than any previous Falcon. We feel it has been greatly successful in offering a choice of three engines, six body stylings and two transmissions it now leads the option market; a two-door hardtop, to be introduced soon will carry this even further.

The mechanical and body styling changes to the car have been described completely in the April and March issues of WHEELS and we will not labor them again. It has, of course, the option of the  previous 144 and 170 cu in engines  uprated to 96 and 111 bhp, mainly through increase in stroke and valve head sizes, plus the new 200 cu in. "Super Pursuit" engine at the moment available only with automatic transmission. Borg-Warner is experimenting with Falcons and its ·three-speed transmissions, so the two-speed Fordomatic may not be long for this hemisphere, particularly if the Tariff Board inquiry militates against imported components, as we expect it shall.

All three engines share a compression ratio of 8.7 to 1, and all respond very well to self-mixed 98-100 octane fuels. Oil change periods have been extended to 6000 miles by use of an improved oil filter, and brakes are self-adjusting. Body styling changes are minimal, but have given the car more character, particularly in the squaring-off at the rear. One of the most obvious changes to the trained eye is that the car does not show its underskirts, as it were, at the rear. Relocating the rear spring hangers has helped hide much of the rear axle assembly that was exposed, naked, to the public gaze.

Ford has also given much attention to anti-rust treatments of chrome and body metal. Front wishbones are from the Fairlane 260, and the coil spring/shock absorber units are heavier and have a higher rate. Rear dampers have been angled differently. The XM model now uses the 6.50 by 13 tyre, on a 4 1/2 in. rim that was optional on the Ford Falcon XL.

We covered 1522 miles testing three of the units. They were a 170 deluxe sedan, a 200 deluxe sedan, and a Futura with 170 engine. They varied remarkably in engine stiffness in their early miles, although much of this was probably due to stiff throttle springs - a habit which suspicious-minded motoring journalists might attribute to a company's desire for good fuel economy figures in its test cars. In fact, the 200 cu in. engine - which had a very free throttle spring - returned an average of 21 mpg under all conditions, and the specific consumption figures at steady speeds in top gear were good.

Most of our performance testing was done on the new engine, because of its novelty. We were quite pleased with its acceleration figures, but top speed of 90 mph was disappointing, even allowing for a mileage of less than 2000. The car does not work hard under acceleration, because the two-speed Fordomatic transmission has always given an impression of being utterly lazy. The car goes deceptively hard, particularly now that extensive sound-proofing has dampened down that unpleasant nasal buzz in the exhaust note. The handling has improved remarkably. Lowering the steering wheel by an inch in diameter, raising the seat cushion level and putting the front seat an inch or so further rearward has done wonders for the driver attitude at the wheel. One now has “arm room" with which to cope with low-geared steering, and this removes most of our objections to the Falcon system. Five turns lock-to-lock is not a disastrous ratio in itself, but it is most unpleasant when the only torque one can exert at the wheel rim comes from forearms and wrists.

Most of our drivers found that they could now commit the Falcon completely in all road situations whereas they were consciously holding back the earlier car. There is less roll movement and less rear axle misbehaviour, and we found that the car is absolutely faithful at all times. Under pressure on winding roads it begins to feel just like an overgrown Cortina, particularly in the way one would put on the first amount of lock and gradually feed the wheel back through the hands while applying more and more power out of a corner. The car is now predictable, even on wet or loose surfaces; that could not be said about the XL, because few people had enough courage to turn it loose.

The ride is firmer than it was before, due to higher rates all round. There is still some front-end and steering tremble over bad corrugations, but none of the wallow and wheel flap found in earlier Falcons. The car -- like most with live rear axles -- will move around a lot when driven hard over indifferent roads but it never becomes a handful. Over the "jump-ups” on the test roads near Port Lincoln it always landed firmly, but fairly quietly. Road and engine noise have been dampened a great deal in this new car.

The changes in seat location and wheel size have brought the wheel rim out of the line of sight and closer to the driver's knees. All of our drivers liked the new situation, and were definite that it made for far more confident handling of the car. A minor side effect of the styling, incidentally, is that you can you can see your rear extremes now when reversing. The front end is still a mystery, because the curve of the bonnet conceals the extremities, which are actually about two inches further from the driver's seat.

Our general opinion is that the extra power has been well-matched by improvements in suspension and steering “feel”. The car can be cruised at 75mph in peace of mind, although a two-speed gearbox limits one’s overtaking flexibility, despite first running to 50mph. Nonetheless there is enough torque from both the 170 and 200 engines to accelerate the car from, say 55 mph in drive. However, the brake lining swept 'area' remains unchanged at 114 sq ins., and this is not enough. The brakes can be made to fade readily under hard work and are affected by water splashes, but recovery is rapid; they are adequate for normal traffic driving. The handbrake, under the facia, is too far away, although it pulls up the car well. 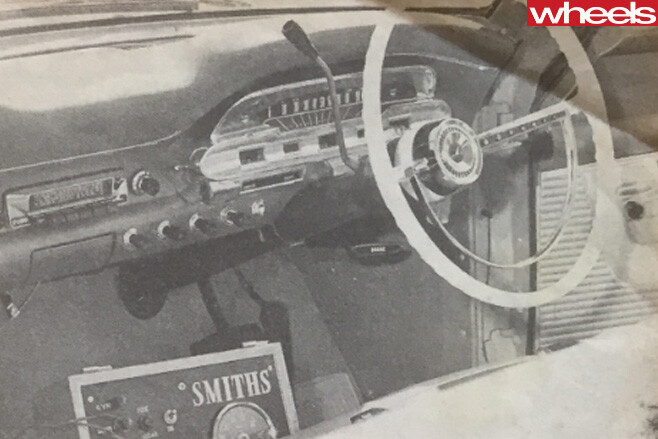 Great changes have been made to the XM’s interior, and most of them are for the better. Trim materials are more pleasant and less garish, although we still find the lavish use of red in the Futura  interior quite overpowering. One of the most important alterations has been to the seating.  Previous Falcon seats, apart from being set too low, were prone to sinkage. The XM seating has been stiffened and raised, and the woven fabric inserts in the pvc upholstery have been replaced with a moulded pattern, which serves the same purpose of locating the passenger's rear to the seat but does not get as grubby as the fabric materials did.

The floor covering is an improved pvc mixture that looks much neater and more durable than the rolled, colored chewing gum used in some of the Falcon's competitors. There is slightly more leg room in the rear, and head room is good throughout. However, the rear-seat cushion is still curved at its edges to allow easy exit and access, and this does rob one of some leg support. Otherwise the seats are properly angled with good support.

The top of the facia cowling still reflects badly in the vast screen, and we feel also that the top of the screen extends too far back into the hood for Australian sunlight. Most Falcon owners will still be driving the XM with the sunvisors swung forward.

The visors themselves have gained padding, but still are located by a plastic ball in a plastic spring-clip that often springs and rarely clips. The big rear vision mirror covers a lot of the rear window.

The redesigned facia has too much ribbed chrome moulding around the instruments, which themselves are quite well located in relation to the new two-spoke wheel (with those rather dreadful cone embellishments on the spokes). Unfortunately, neither the temperature nor fuel gauges are graduated apart from EMPTY or C for COLD or somesuch, and are of little help.

As well, the Falcon retains those great features which came with the very first Ford Falcon XK; those two big air boxes each side of the front compartment, making it the best ventilated six on the market, plus the beefy door and window handles located properly in the doors.

The interior, overall, is well-planned, durable and far better finished than that of any previous Falcon. The same goes for the exterior paintwork, which is much better than any Ford has produced before. Some of the acrylic finishes are deep and lustrous.

Overall, the XM Falcon has many changes that have been made for the practical purposes of durability, than for the sake of practical usage and durability, than for the sake of keeping up with the Joneses from Fisherman's Bend. Whether this very good car can recapture the glories of former registration figures is not within the scope of a road test article. We will say only that for the first time the Holden has an excellent car competing with it in volume.