Here’s our comparison test of the two semi-luxury, status-seeking sedans that have set Australia agog

Here’s our comparison test of the two semi-luxury, status-seeking sedans that have set Australia agog.

IF any Australian during the past two years had any doubts that the Ford Motor Company was serious in its efforts to tackle GMH's domination of our family car market, those doubts must surely now be dispelled.

In the very same week GMH released its long-awaited EJ range, Ford answered with the XL Falcons, the first change in the Falcon since it was released in Australia in September, 1960.

Not only was this the first time in Australian motoring history that the makers of the two leading volume sellers released new models in the same week, but it was the first -time an American-owned car company had released a new model in Australia before it went on the market in its homeland.

And that is precisely what Ford did. The XL Falcon hit the Australian market months before the same model was due to be released in America, proving beyond doubt how keen Ford is to bite big chunks out of the Holden percentage pedestal. 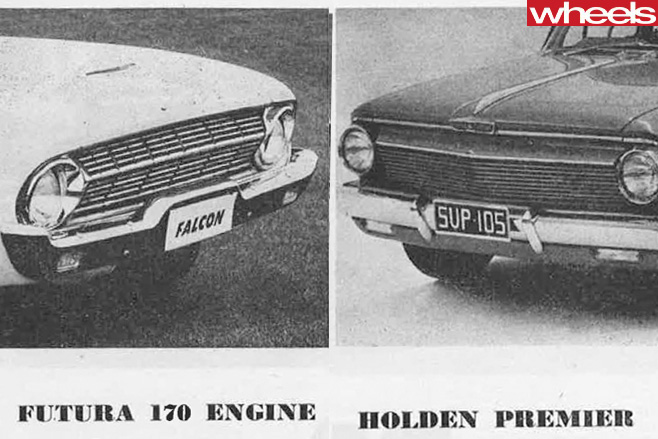 To the general car buying public, probably the most interesting - and surprising - aspect of this second round of the Holden-Falcon battle was the new luxury model added by each maker to his range.

Holden came out with the Premier at a very un-Holdenish price of £1420, and Ford Falcon produced the Futura for £1252 in its most basic form-stick shift and 144 cu in engine. Although the Futura was announced with the rest of the new Falcon range, it was not going to be generally available for many weeks - a legacy of the industrial dispute at Ford in mid-June which greatly upset the company's production schedules.

But GMH had not been blighted with such troubles, and the Premier hit the streets at the same time as new standard and special sedans and station wagon. Predictably, it got the lion's share of the new model publicity throughout Australia.

It was something entirely new for a motoring public accustomed for 14 years to accept basic Holden standards - those of reliable, serviceable transport with a minimum of motoring comforts.

The Premier was still very much a Holden, basically. Its bodyshell, engine, suspension, brakes were all exactly as they were to be found on the lesser EJ models. The Hydramatic automatic transmission was made standard equipment, but this, too, was no different from the Hydramatic offered as optional equipment on the rest of the Holden range.

lt was only in the trimmings and standard of finish that the Premier offered something brand new in the Holden marque.

So, too, with the Futura. Unlike the American version of the Futura, which is a two-door coupe offered with an optional four-speed, floor-change gearbox, the Australian version is basically a Falcon deluxe - with trimmings. 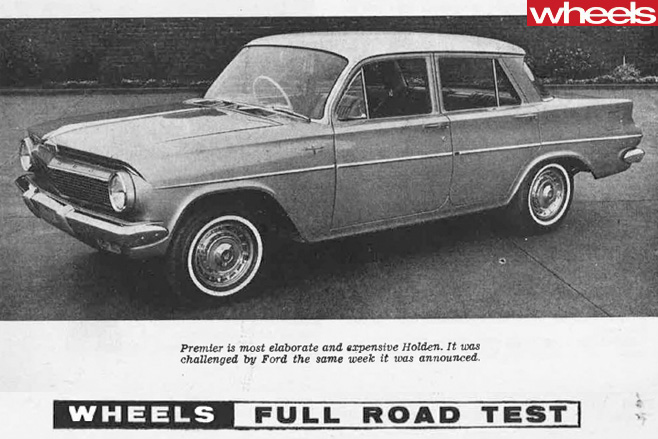 The Futura has none of these desirable items, but it does share some basic equipment with the Premier, such as divided, semi-bucket seats in the front, wall-to-wall carpet, a console between the front seats, extra ash trays, thicker seat padding, padded sun visors, wheel trim discs and special ornaments.

Ford's luxury model has one distinct advantage over the Holden Premier. It is sold with the full Falcon range of optional engines and transmissions.

So, too, the Futura buyer can have either the standard three-speed manually operated gearbox or the two-speed Fordomatic automatic transmission.

As with the other standard transmission XL Falcons the standard gearbox Futura has an improved gearbox and change linkage over the original Falcons.

The gear teeth have been toughened, second gear ratio lowered and the linkage altered to provide a longer and smoother movement between cogs.

Although noticeably better, the new gearbox was still not without fault. The long, steering column mounted change lever felt too light and spongy. The synchromesh could be beaten if the driver pushed the lever either too quickly or too slowly from ratio to ratio. 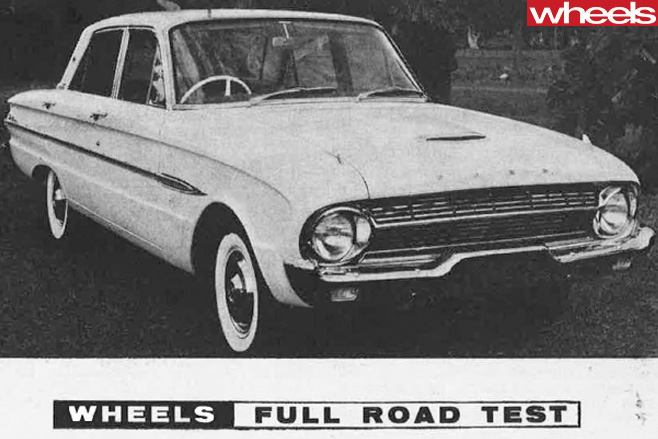 A few hours' driving was sufficient to get the hang of the gearbox, but even then it left the pilot with the impression that he needed to treat the whole thing gently.

The Fordomatic transmission has not been altered.

Gear selectors seem to be a Ford weakness. The Fordomatic selector does not need to be used very often - virtually only to move from neutral to drive or to find reverse - but it is a reluctant mechanism that does not shift with the smooth action of most automatic transmission selectors.

Keen motorists in the £1420 bracket are undoubtedly disappointed that GMH has not offered the Premier with either a manual transmission or a more powerful engine.

You have no choice in the matter - if you want a Premier, you must have the standard Holden engine, and you must have Hydromatic. Ford should undoubtedly catch a slice of this new luxury/popular market because of its more broadminded attitude to the performance and transmission tastes of potential Futura buyers.

Because of its extra weight, compared with the Holden standard and special models, and its compulsory automatic gearbox, the Premier does not give a sensational performance.

On the rather low mileage test car (it had done only 800 miles) I could not top 80 mph, and acceleration times were just adequate, certainly not exciting.

Indeed this is the point about the Premier - it is not really an exciting car, and I doubt if it was meant to be one.

But it is exceptionally comfortable and extremely well equipped. The bucket seats in the front are solid, thickly padded and well-shaped to support the shoulders, backs and thighs of those who sit on them.

Because the seat is thicker than the bench provided in other Holdens, the driver's seat cannot be pushed as far away from the steering wheel as I would like.

With that slight reservation, however, the Premier has an excellent driving position. The driver is upright, the white steering wheel is well-raked, all the instruments are right in front of him and the vision in all directions is so good that the car is just about impossible to criticise from that point. Even the rear-vision mirror, for long a sore point with Holdens because it pointed at the back roof, now lets the driver see straight through the big and distortion-free back window. 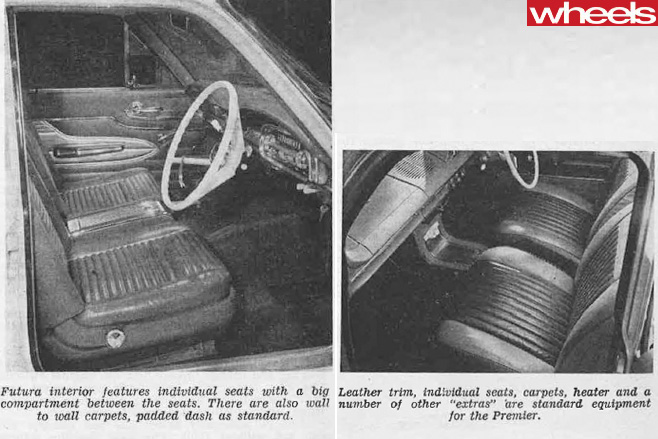 The Futura, which provides equally comfortable bucket seat in the front, suffers from the same fault as the Premier as far as the steering wheel goes - only more so.

White, handsome and deep dished, the Futura wheel comes so far out from the dashboard that one would be excused for thinking it was meant to be turned by the teeth.

And, of course, the Futura retains the Falcon steering ratio which necessitates a full 5 1/4 turns from lock to lock.

handling and, indirectly, made the low-geared steering seem less of a burden - but only slightly so. 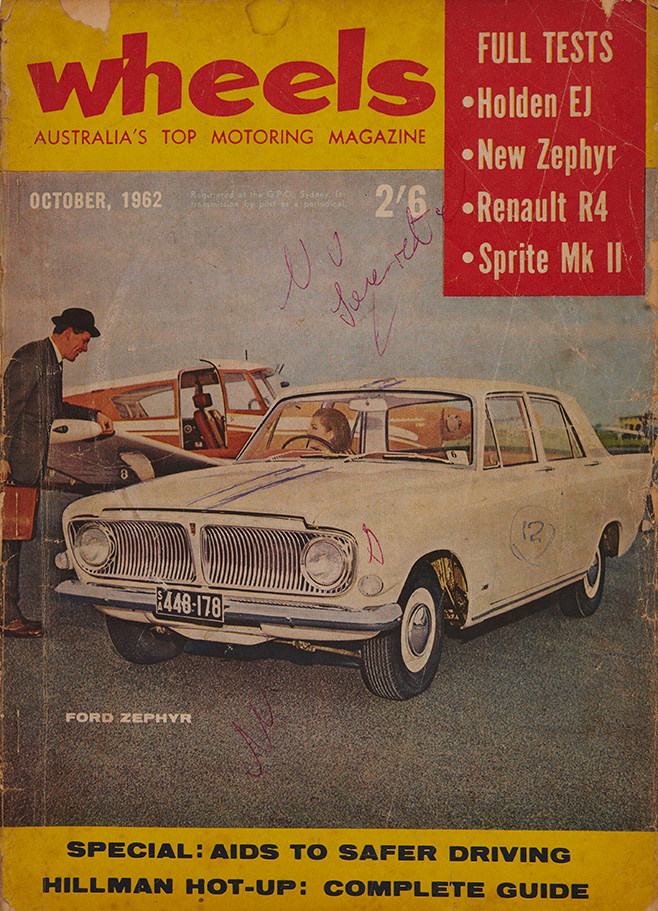 It seems as ridiculous as ever that such a moderately lightweight car of compact dimensions should be fitted with a steering mechanism that would be more useful for manoeuvring a 10-ton truck at slow speeds through sand. In fairness to the Futura (and the other Falcons), the steering is certainly light and on good, reasonably straight roads, the car keeps going in a straight line with little conscious effort on the driver's part.

Finish of all the Falcon range has been improving continually since the car first hit our market, and the new range is quite well finished but note quite up to the fairly high standard of the Holden and certainly not up to the standards of the pacesetters in the popular car finish stakes - Volkswagen and Hillman.

As I wrote earller, the handling of the Futura and the other new Falcons is greatly improved on the old models. Earlier Falcons used to scud sideways, in a crab-llke action on broken gravel roads traversed at speed. I found the new models stayed on their feet with dignity, and loped across potholes and corrugations without any disturbing kicks or slides.

There Is little between the Futura and Premier on the score of stability and roadholding ability. But the excellent Holden steering does give It an edge.

Appearance Is much more an open question now than it was when the Falcon competed against the FB and EK Holdens. Then the Falcon had a commanding advantage.

Now, the Holden is radically restyled and, in most eyes, looks much better. But the Falcon is still an exceptionally handsome package, especially the Futura, with its extra embellishments and all red upholstery.

Personally I could do with less red and chrome inside and a couple of extras like a heater and windscreen washer, but l'm prepared to bow out of the argument arid leave it to the fashion experts.

The Premier does have a slight advantage by using leather trim on the seats. The Futura sticks to plastic, albeit a very good plastic that looks like leather, and about the same quality as the plastic used by Mercedes-Benz.

Good carpets are fitted to both the Premier and Futura, back and front.

Well, there it is. Australia's "people's cars” have gone for the status seekers in a big way. How do they square up to each other?

That is a question ultimately to be answered by the market. And the market will base its answer on such pertinent facts as the Falcon's markedly better performance, price advantage and range of optional engines and transmissions and the Premier's more elaborate equipment, better handling and better finish.