There was never any question there would be another Falcon GT.

Even as the last of the Ford EB Falcon versions rolled out of Tickford's workshop five years ago, Ford Australia's marketing mavens had already decided there would be a 30th anniversary version in 1997.

Ford Australia design chief Steve Park began the initial styling work on the EL GT in early 1995. By March he had more or less settled on the controversial front end treatment.

“We wanted something different,” says Park. “Something that gave the car a strong 'down the road graphic'. We didn't want to do just another 'letterbox' grille.”

The March sketch also included a wild centre-post rear wing, with the high-mount rear stoplight included in the single pillar. The pillar was a more elegant, aerodynamic device than the somewhat agricultural looking attachment HSV uses for the GTS-R wing, but it was felt to be too heavy visually for the Falcon rear end.

There was another, more practical reason why the centre post wing didn't make it into production, says Tickford product planning chief Howard Marsden: “We'd learned from the race cars that a centre post wing wasn't as effective on a Falcon as a wing with two side supports." Howard Marsden recalls just one example: “We had to work very hard to allow Steve to hold the line he was after on the front spoiler while improving the airflow into the engine bay.”

A very early prototype of the front spoiler was in fact tested near Tennant Creek last April to make sure it worked.

While the stylists finessed the GT's form, Tickford attacked the functional bits.

Tickford boss David Flint concedes the Ford Falcon EB GT suffered in a couple of areas as it was hurriedly conceived and executed; this time, he says, nothing was going to be left to chance.

Powerplant was again to be the Cleveland 5.0 litre Windsor V8 – now only used as a marine and industrial powerplant elsewhere – fitted with off-the-shelf go-faster bits. A 5.8 litre V8 – the legendary 351 – simply wasn't an option.

“The 351 will not fit,” says Marsden emphatically, adding that the cylinder banks foul against the front suspension towers and leave nowhere for the exhaust manifold to run.

“You need a very big hammer.” 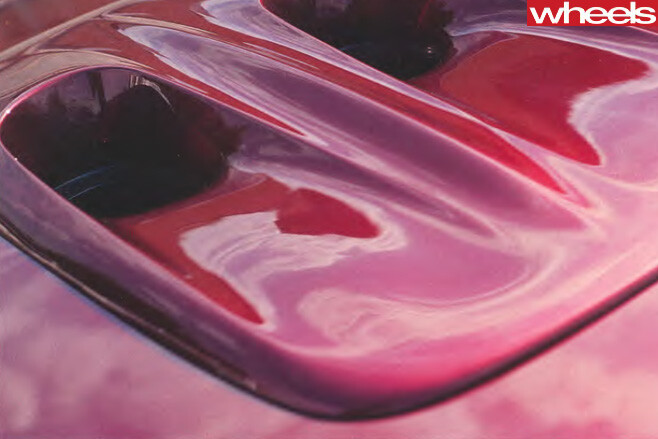 A larger capacity version of the Windsor was considered. “You can stroke it out to about 340 cubic inches,” says Marsden, “but we decided that if we couldn't get the charisma of the 351, it was better to stay with what we knew.”

Tickford kept the hardware straightforward, opting for the proven Ford SVO GT40 cylinder heads with their bigger 47mm inlet and 39mm exhaust valves, plus a larger diameter throttle body (up 5mm to 65mm) and Showa-type two-piece inlet manifold (up from 62mm to 70mm). The standard camshaft was retained, but roller rockers fitted to give greater lift.

New 42mm four-into-one headers were designed and the full dual exhaust (the twin pipes are hidden inside a single oval chrome extension exiting under the rear bumper) has half the back pressure of any previous Tickford exhaust system.

The previous GT engine, like the XR sixes, was developed by Tickford in the UK. This time, however, all the work has been done at TVE's workshop just across the Hume Highway from Ford's Broadmeadows plant. Among the detail tweaks: the addition of a 13mm Phenolic spacer between the upper and lower inlet manifold halves which was found to cool the incoming air and give a 9Nm increase in torque.

Following the embarrassment of the EB GT, which was found to have something less than the 200kW expected, Tickford made sure the new GT engine met the required targets.

“The calibration was the secret,” says Marsden, referring to the tweaking of the sophisticated EEC V engine management computer to make the most of the engine's improved breathing. The GT engine has been tuned to run on premium unleaded, allowing four degrees more spark advance for extra power. If you get stuck in an area without PULP, there's no knock sensor to compensate for the lower octane fuel, but Tickford has run a test engine for five hours at wide open throttle on regular ULP to make sure there are no detonation or overheating problems.

The tricky calibration work – Marsden calls the powerful F1-developed EEC V “a particularly non-user-friendly piece of equipment” – was handled by former Bosch engineer Rolf Glenk. Using an Arcon processor, he was able to make the required changes in the computer's RAM, then send the data to Dearborn, where it was burnt into the EEC V's ROM. The modified EEC Vs were then shipped back to Melbourne.

The engine program, which resulted in a genuine 200kW at 4700rpm and 420Nm of torque at 3700rpm, took 18 months to complete. But it wasn't the most expensive part of the EL GT program.

“In terms of dollars, it was the vehicle dynamics that cost,” says David Flint.

The EB GT's suspension was developed around Pirelli's sticky, expensive P Zero tyre. Ford sources now admit the P Zero was chosen simply to give the GT a marketing edge over Holden's HSV cars, and not because it was necessarily the best tyre for the chassis.
“It was a classic case of the tail wagging the dog,” says one insider.

“Steve Park was almost on his knees begging for us to go to 18in wheels,” recalls Howard Marsden, “but that would have simply been too much tyre for the car.”

Suspension mods included Tickford's new front-end geometry, unveiled on the XR cars last year, plus extensive use of neoprene bushes. Asa result the front wheels sit much more upright than before – negative camber is a mere half a degree – and there's less tyre squirm thanks to improved lateral control. The power steering was also recalibrated. 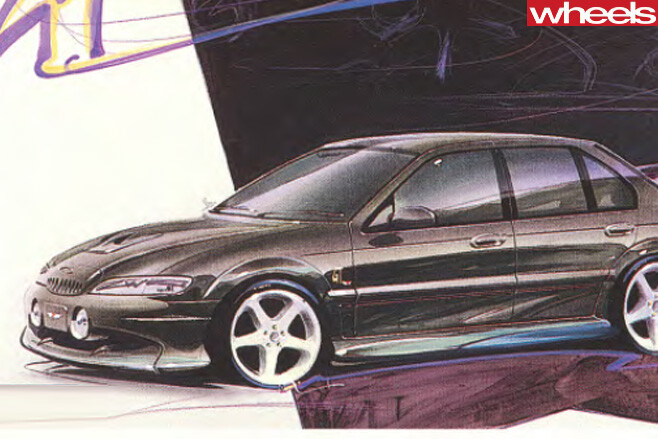 The aim, says Marsden was “what you steer is what you get”: in other words, near linear steering response.

New front brakes were the other major mechanical change to the EL GT. The larger (328.5mm from 287mm), thicker (up 3mm to 28mm) vented front discs are clamped by two-pot PBR aluminium callipers embossed with the Tickford flying wing logo.

Installing the new brakes, which have 12 percent more pad swept area than the standard items, required a revised forged upper spindle. Ford lent Tickford original moulds which were then modified to suit.

Unlike the previous GT, Tickford wanted suspension and engine tune identical for both manual and automatic transmission versions. With autos expected to account for 54 percent of EL GT production, Tickford persuaded BTRE to develop a form of adaptive shift for the Aussie designed and developed four speed.

The transmission's computer monitors a number of inputs, including throttle opening, current gear selection and main gearbox shaft speed, and selects one of five different shift protocols. The standard protocol is equivalent to the economy setting on the standard Falcon auto, and the shifts get progressively firmer and further up the rev range.

In addition, the gearbox has been programmed to start in second gear if it senses two first to second shifts have occurred and the vehicle has stayed under 45 km/h with no more than 60 percent throttle. The aim is for smoother running in stop-start traffic.

Improved quality at BTRE means Tickford could use a locally made gearset for the TS five-speed manual, instead of the beefy imported set used in the EB GT, in a bid to reduce transmission noise. Gear lever travel was reduced 16 percent and the detente spring stiffness cut by 30 percent to improve shift feel.

The TS has also benefited from an improved oil flow to a couple of gears, a fix developed by BTRE for Maserati, which uses the Aussie five speed in its Quattroporte sedan.

Will it appear on regular Falcons? Probably not, as the unit cost is high.

Most of the GT is built at Broadmeadows. Using a Fairmont as a base, it is fitted with Tickford underpinnings and the V8 engine – imported as a completely built-up unit from the US - on the line. The modified seats and black painted dash surround are also fitted on the line.

“We are not in the business of pulling cars apart and building them back up again," says David Flint.

The body kit – largely fibre-glass, apart from the RIM (reaction injection moulding) grey inserts on the front spoiler and the leading edge of the side skirts – is all installed at Tickford. Precisely 272 EL GTs will be built – 250 for Australia, 20 for NZ, and two for South Africa.

GT Job One went down the line at Broadmeadows on February 3, and was completed at Tickford on February 18.

This car, labelled P1, was the first of 11 pre-production cars to be included in the GTs earmarked for Australia. The remainder will be coded GT1 through to GT239. But fear not, we won't be short-changed – all 11 P-cars will be refurbished once their testing duties have been concluded and sold off.

At least they'll be well run-in...