Okay, you’ve heard the rumours – stories about a last-of-the-breed big-hitter to mark the end of HSV’s locally produced hot-rods.

Tales of near-on 500kW, V8 Supercar suspension and semi-slick tyres. And whispers of a price north of $150,000. In other words, the most powerful, most expensive Australian-made car. Ever. Well, just for once, the rumours turn out to be true.

Mind you, it’s not that simple and while there is a headline act, HSV has put together a three-car range of big-bangers to farewell the local Commodore platform, just so there’s something for everyone. Everyone with fairly deep pockets, anyway.

The farewell line-up has been dubbed the GTSR family and more or less amounts to a GTS sedan and Maloo with plenty of mods and tweaks as well as the big-daddy W1 with pretty much all those rumours bolted to it. Tweaks you say? 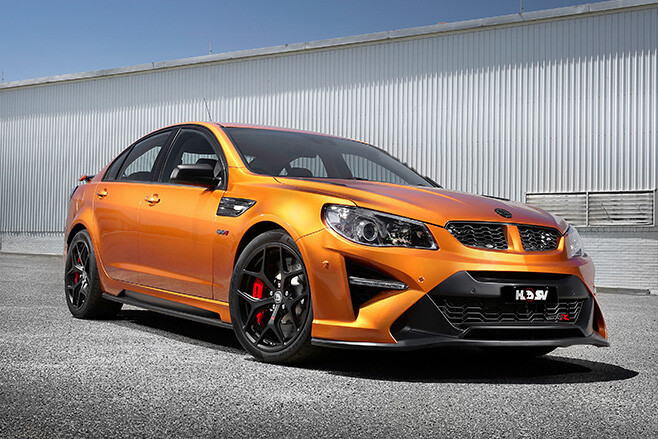 Actually, tweaks is selling the changes and additions short, because we’re talking some major (and not-so-major) advances in braking hardware, engine tech, wheel size and even bodywork to give the GTSR stuff its mojo.

Starting at the start, the GTSR and GTSR Maloo’s blown 6.2 (LSA) gets a small power hike from the GTS’s 430kW. The new number is 435kW and comes courtesy of a new air filter. Torque remains at 740Nm.

A brake upgrade is part of the deal with new-gen six-piston AP Monobloc calipers now grabbing 410mm floating rotors at the front. Four-piston calipers decorate the rear axle. Wheels are now forged 20-inchers in the same sizes as the GTS.

Check out our 8 nerdy facts about the HSV GTSR W1

HSV has really gone for the doctor with the bodywork, too, and somehow managed to get a set of widened polypropylene front guards past the bean-counters. There’s also new front and rear fascias, fender vents, a rear diffuser, rear spoiler, exhaust tips and, of course, the appropriate badging. Inside, it’s a mix of Alcantara and leather. 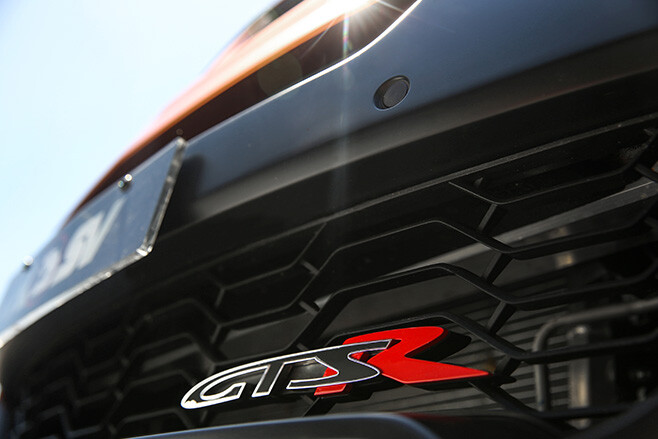 However, even those mods pale a little when it comes to the main stage and the main event, the GTSR-based W1. Don’t be fooled into thinking this is just a GTSR with a few more plastic bits.
No, no, this is, as they say in the classics, throwing the kitchen sink at her. Let’s start under the lid, shall we?

Are we looking at a further modified LSA? No, we are not. Instead, you’ll find an LS9 a la the Corvette ZR1. It remains a 6.2-litre engine but with a bigger pump and a range of internal goodness, it kicks out 474kW and 815Nm.

Some of the extra power is liberated by being able to rev the thing to 6600rpm, and to achieve that, the LS9 gets forged titanium con-rods, forged alloy pistons, titanium inlet valves, hollow-stem exhaust valves, under-piston oil jets for cooling, a specific camshaft and a 2.3-litre belt-fed blower.

Underlining all that race-tech is a dry-sump system that holds almost 10 litres of oil and incorporates a water-to-oil cooler. That list wouldn’t look out of place on the spec sheet of a high-end racer. Air enters the equation via a carbon-fibre, over the radiator (OTR) snout while at the other end of the combined chemistry and physics experiment, the gasses leave via a two-and-a-half-inch stainless system with integrated cats (for a quicker light-off time) a four-into-two-into one layout on each bank, ceramic coating and a recalibration of the bi-modal valve with the sole intention of making more racket.

The other piece of the puzzle is the intercooler, which has 47 per cent more capacity than the LSA’s unit, features a twin brick design (one matrix per bank) a front-mount heat exchanger and
a stand-alone, sealed cooling system (it doesn’t use the engine’s coolant).

You can forget about an auto tranny option for the W1; there’s just no auto that is compatible with the LS9 AND capable of harnessing 800 Newtons. So HSV has cobbled together its own take on the Tremec TR6060, combining the Corvette’s gearset (known within GM as MH3).

The high ratios are shorter, the low ratios are taller. That’d be a close-ratio 'box, then. A twin-plate clutch has been snavelled from the Sachs catalogue and there’s a solid (single-mass) flywheel. 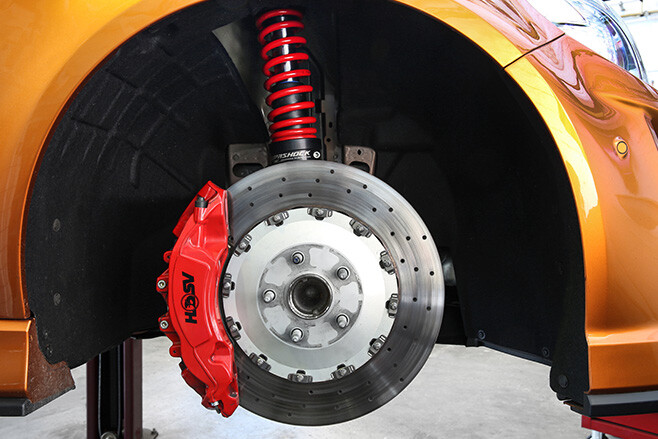 Brakes start with six-piston Monoblocs up front and four-piston jobs out back. The single-piece design of the calipers allows for a unit with a shallower profile, meaning they can be positioned within the existing 20-inch wheel and still cop a bigger (410mm) front rotor. So they do.

The rotors are fully floating with sliding pins and anti-rattle clips to keep them civilised. All up, we’re talking 25 per cent more pad area and a 10 per cent reduction in unsprung weight. Really, it’s a win-win.

Throw in the R-spec Pirelli P Zero Trofeos and it’s all starting to look and sound a bit racy, no? Well, it gets better. See, the wider front guards have allowed not just for the 265/35 R20 hoops, but also a change to wheel offset and scrub radius. It sounds Nth-degree, but it’s all tried and true race-car stuff. And, now, so is the suspension. While nobody ever complained too much about HSV’s Magnetic Ride Control adjustable damping, for the W1, they’ve gone for the doctor. SupaShock – Walkinshaw's shock supplier for its Supercar team – has come on board for the W1, supplying a set of shocks with upside-down front struts and what started as a coil-over for the rear.

All four corners feature monotube construction, and the rears have ditched the actual, physical coil-over layout so that HSV could mount the rear spring in the original upper spring mount (and the rubber pad) in the interests of keeping transmitted noise down. The move means the W1 no longer has adjustable damping (although the selectable drive modes still control throttle sensitivity, the bi-modal exhaust and the steering weight) but it does mean that the new spring rate is about 2.2 times heavier than a Clubsport R8.

That’s a big change, for sure, and it means the W1’s spring rates are now getting up towards the rates that you’d see in a Supercar set-up for something like a street circuit. Hardcore, or what? And what’s that going to do to ride comfort?

Inside, the W1 gets full Alcantara seating and a tiller and gear-knob trimmed in the same stuff. The diamond-pattern stitching sounds kind of twee, but when you see it in the flesh, it’s just lovely.

Outside, you’ll pick the W1 by its specific 20-inchers, and a heap of carbon-fibre extending from the fender vents to the skirts and the upper part of the rear wing. Then there are the trapezoidal exhaust tips and bold GTSR rear diffuser just to make sure. Nah, you ain't gonna miss it. 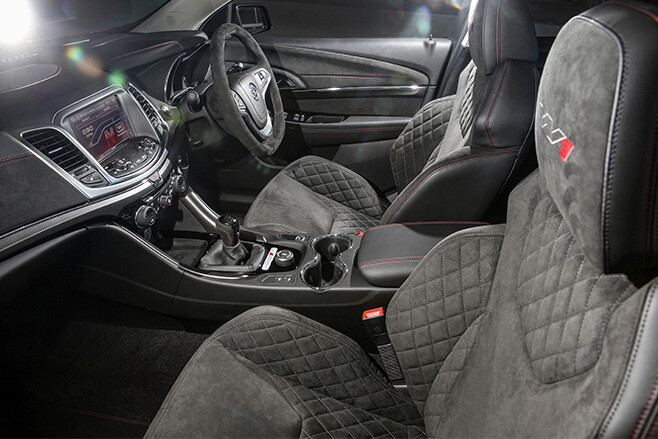 Except you probably will. Miss it, that is. See, HSV only has enough engines for a production run of 300 cars (including the handful the Kiwis will get) so W1s won’t be lying around like empties after a barbie. There’s also the fact that this car is a gold-plated, 24-carat collectible. According to HSV’s engineering boss, Joel Stoddart, the move to an LS9 presented challenges. Not the least of which was actually finding the engines, since the LS9 is now out of production.

“We had to head to the US and start going through warehouses trying to find enough engines,” he says. “And then we had to kind of beg for them. At the start, we could only find a handful, but we kept at it and found enough to complete the program.” The challenges didn’t stop there. “We had to come up with a new accessory drive, too,” Stoddart says. “The Corvette has hydraulic power steering so the accessory drive included that.

We didn’t need that (the Commodore has electric-assist) so the pulleys are our own. "But an even bigger problem was finding a transmission to handle 800Nm. We knew the Tremec TR6060 from the Corvette could, but that car has a transaxle, not a conventional layout. So we had to somehow put that gearset into our gearbox casing. Then we couldn’t find an input shaft anywhere in the GM world that was the right length, so we had our own made.”

Stoddart admits that’s a lot of development work for a car that will be built just 300 times. While nobody is saying for sure how much gold has been used, HSV brass reckon the number is close to $10 million. Yet, HSV claims the car will still be profitable, saying “it’s not a price gouge on our part. Not by any means.” 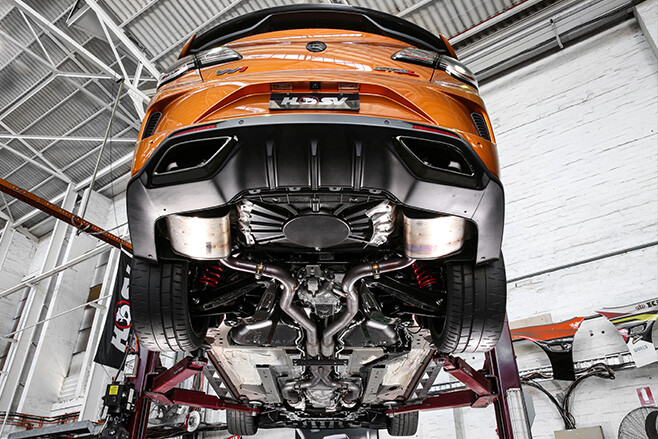 Where things get serious

2. Tyres
The track-focused R-Spec Pirelli Trofeos will stick like glue around a track – but risky in the wet

3. Dry sump
The V8 is dry-sumped with an oil capacity of almost 10 litres and a water-to-air oil-cooler

4. Suspension
With the addition of SupaShock items the W1 has suspension akin to (V8) Supercars. Impressive