BLOODHOUND SSC's Rolls-Royce jet engine was successfully fired up for the first time this week.

It's a significant step forward in the life of the land speed record contender, which will make its debut shakedown run in England later this month, followed by 800mph (1287km/h) and eventually 1000mph (1609km/h) record attempts in South Africa.

It's a good time then to revisit the carbonfibre capsule, pictured below, that will be home to Andy Green as he bids to smash his own 763mph (1228km/h) land speed record and become the first man to top 1000mph.

On a nondescript industrial estate in Bristol, England, Green invited Wheels to step inside the world’s fastest office.

Green is tall – 193cm – and there’s no disguising just how claustrophobic it will be. The team doesn’t have a back-up driver, so everything has been built around the RAF Wing Commander. The steering wheel is titanium and has been shaped using 3D printing techniques to fit his hands. There’s a throttle pedal for the jet engine and a trigger on the steering wheel for the rocket that will push the car through the sound barrier.

Simple toggle switches flank his legs and ahead are three digital screens. The central screen shows the speed in both miles per hour and the Mach number (Mach 1 is the speed of sound), plus the jet engine and rocket outputs. The screen to the left monitors the braking systems while the one on the right shows the condition of the propulsion system.

There are also analogue instruments for speed and time, provided by Rolex, which have a separate GPS and battery system – if the electrics fail they’ll keep ticking. “It’s critical I know what speed I’m travelling at,” says Green. “If you deploy the parachutes when you’re travelling too quickly, they’ll just be ripped away.”

Bloodhound has the equivalent of 100,670kW and employs a 560kW, 4.2-litre V12 race engine just to drive the rocket’s oxidiser pump.

Everything about this car is supersized. It will accelerate from 0-1000mph in just 55 seconds, by which time it will be covering a mile every 3.6 seconds and outrunning its own sound waves. At these speeds, nothing can be left to chance. The windscreen has even been designed to withstand the impact of a 1kg bird at 900mph.

The team admits its biggest challenge was balancing aerodynamic forces across the speed range. Too much downforce and the nose digs in, too much lift and Green will be employing his pilot skills. The team is confident this tricky conundrum is resolved, but the driver will still have to steer the car in a straight line.

“We can model the car’s stability,” says Green, “and we know there’s a low point around 600km/h. I’m going to be quite busy then.”

Anyone who has seen the extraordinary footage of Green applying opposite lock at Mach 1 in the Thrust SSC record car will understand what ‘busy’ means, but the man himself is unconcerned. 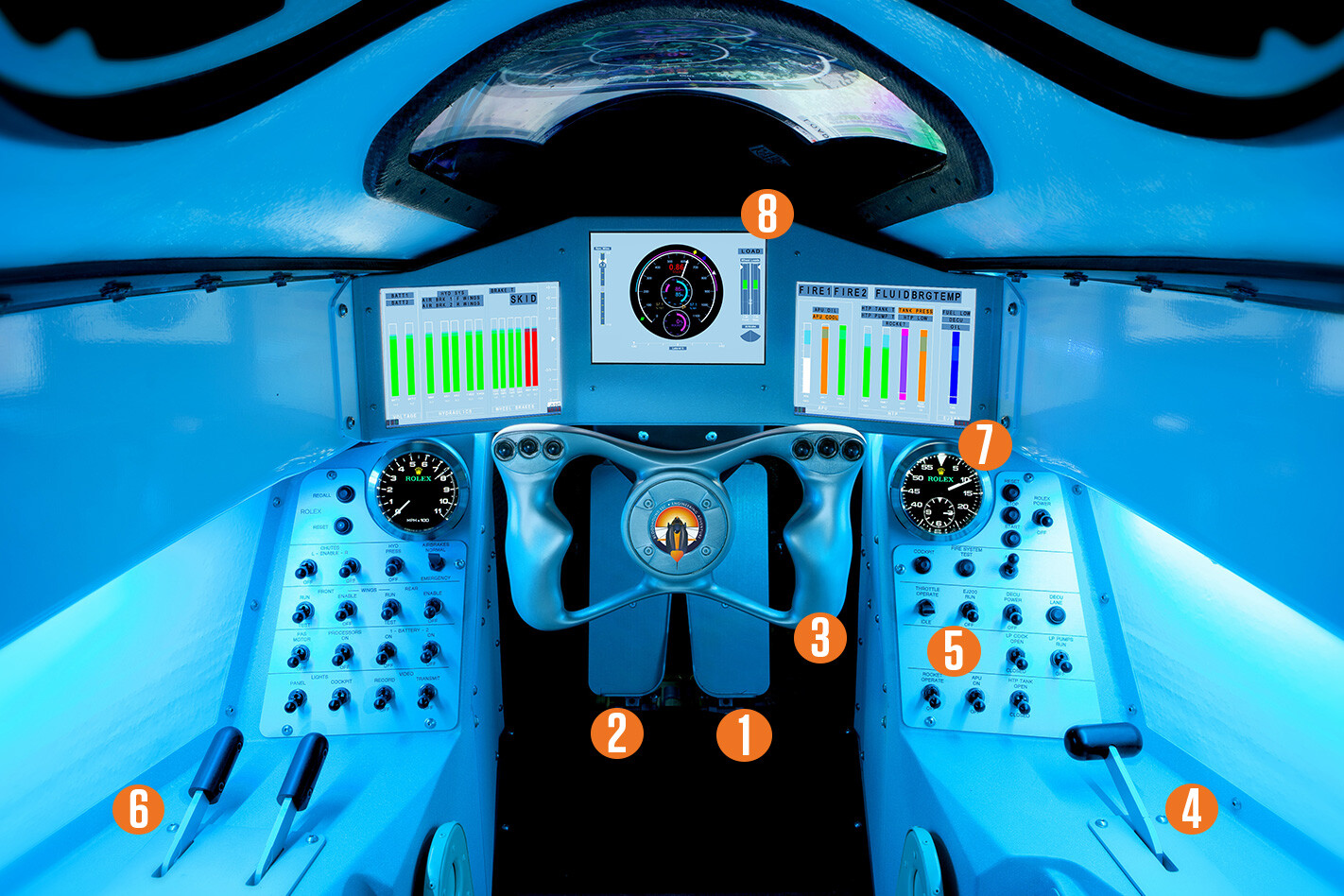 Take a step inside the Bloodhound SSC cockpit.

1. The go pedal. This is the throttle for the Rolls-Royce EJ200 jet turbine, which produces as much thrust (90,000Nm) as a Eurofighter Typhoon.

2. The whoa pedal. Green will have to freewheel down to 1300km/h before the air brakes can deploy, slowing Bloodhound using 20 tonnes of air resistance. At about 1000km/h the parachute comes out. The speed then has to fall below 320km/h before the friction brakes can be applied.

3. Steering wheel, made from lightweight powdered titanium on a 3D printer. Includes buttons for rocket ignition, parachute deployment, radio, and an ‘abort’ switch that throttles back the engine and rocket.

4. Manual cut-off that shuts down fuel flow to the 1000kg jet engine. Bloodhound will suck down as much as 390 litres of fuel on a run, and 64,000 litres of air each second at full noise.

5. This switch activates the rocket motor to help Bloodhound reach V-max, using almost a tonne of hydrogen peroxide oxidant and a tonne of highly combustible rubber.

6. Manual override in case the buttons on the steering wheel that control the two-stage parachute release fail. The parachute – there’s
also a back-up ’chute, just in case – provides up to 3G of deceleration.

7. If things go wrong, Green has access to a fire suppression system that can instantly flood the cockpit. Green has enough oxygen supply for three five-minute runs, with an extra half-hour in reserve.

8. All the vital info Green needs to monitor, including speed, target speed, flying mile speed, warnings for the rocket and jet engine, and green lights for things such as the safe speed to pop the ’chute.