Although associated with sexy shapes and introducing disc brakes to Le Mans in the 1950s, a flick through Jaguar's sports car back catalogue reveals only sporadic highlights involving a clutch pedal – and even these were largely out of reach for your everyday punter.

Early manuals were agricultural in shift operation and clutch heft, while your chance to emulate Walkinshaw's 1985 Bathurst pole lap is limited by the fact that only 352 manual XJS V12s were built.

The next flicker was the incredible XJR-15 with its Le Mans-derived mechanicals and 53-strong production, followed by the even more powerful XJ220, which ceased production way back in 1994. With this background, it came as a surprise when Jaguar revealed its sculptured F-Type would gain a six-speed manual variant, especially because the available ZF ‘Quickshift’ eight-speed torque converter automatic can shift so crisply.

Opting for the semi-dry sump manual, also developed with ZF, saves you 10kg vehicle weight but adds 0.6sec to the claimed 0-100km/h sprint.

Despite the non-descript rubber pedal covers, initial impressions of the three-pedal F-Type are positive, the shifter position a natural fall for your left hand from the leather-trimmed, paddle-less steering wheel. 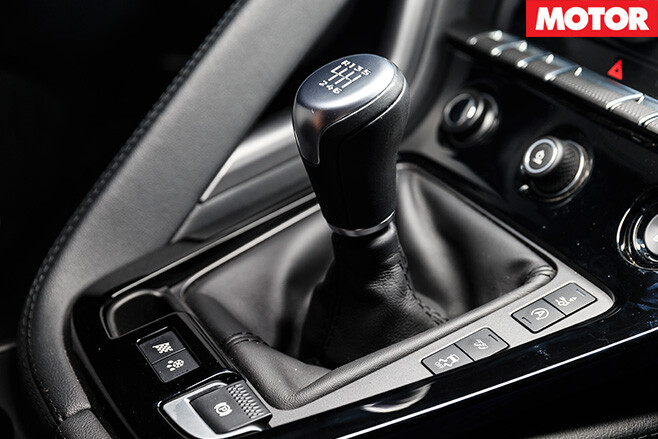 The stubby gear lever and 45mm throw suggests fast shifting is possible, however, once you’ve fed in the clutch (light enough given the engine’s outputs, but inconsistent in pick-up point) and start working the gearbox, you realise that this isn’t a manual that likes to be rushed.

For the smoothest shift it’s a two-movement job, pausing ever-so-briefly through neutral before engaging the next slot, particularly on those cross-gate shifts. You can speed up, say, the three-four change, but doing so doesn’t seem to re-engage drive any faster, despite the ECU offering an upshift speed-matching function.

Up at highway speeds, it comes as a surprise that the gap between fourth and fifth gear is almost rally-car-short, a registered 3000rpm in fourth dropping only to 2600rpm in the higher cog. 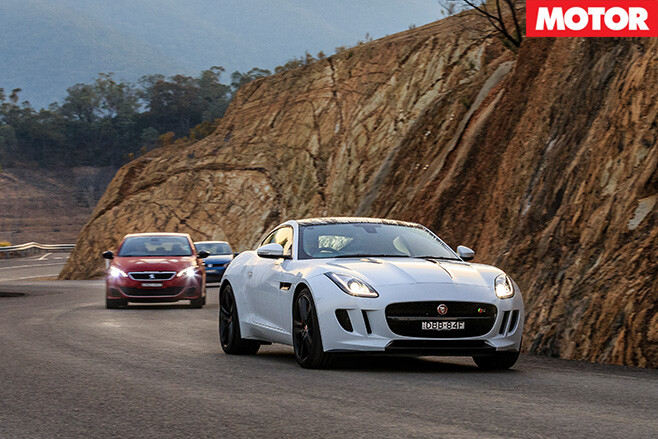 Swapping straight-line blast for braking zone, it’s the pedals that draw attention once more. Apply the brakes and it’s a natural roll of the right ankle to give a jab of throttle on the downshift. It requires a fair twist in the F-Type’s standard drive mode, but employ Dynamic mode (which ramps up throttle pedal response) and your reward grows, exhaust crackle combining with a satisfyingly tingly blip and smoother engagement of the lower gear… so long as you control the clutch re-engagement.

As familiarity builds, it becomes ironic that the manual is at its best is when you hold it in a single gear to enjoy the engine’s developing crescendo and torque reserves. Out of a tight uphill left, using third reveals a rotary-edged exhaust buzz that swells through the rev-range into an E-Type 3.8-aping howl that sounds even better from outside. Sure, the supercharged V6 lacks the ballistic top-end of its auto-only V8 sibling, but it remains characterful and responsive in a way turbocharged cars still cannot match.

Does the manual make the F-Type a better car? Despite the added gear control of the manual – the eight-speed auto can be a little pre-emptive with kicking-down gears – the answer is no.

That’s not to say the manual is a total waste, but more that the slick torque converter self-shifter is a better fit for the F-Type vibe, capable of dual-clutch-matching shift speed when pressing on but also able to cruise when the mood takes you. The overrun crackle also remains.

You’d never pick the manual’s weight advantage and the auto is both more accelerative and fuel efficient with a ratio for any occasion. It also allows you to keep both hands on the wheel, a key advantage when tackling bumpy road sequences that can excite the F-Type’s electric steering, manifested in the wheel jiggling around between your fingers and sapping cornering confidence. 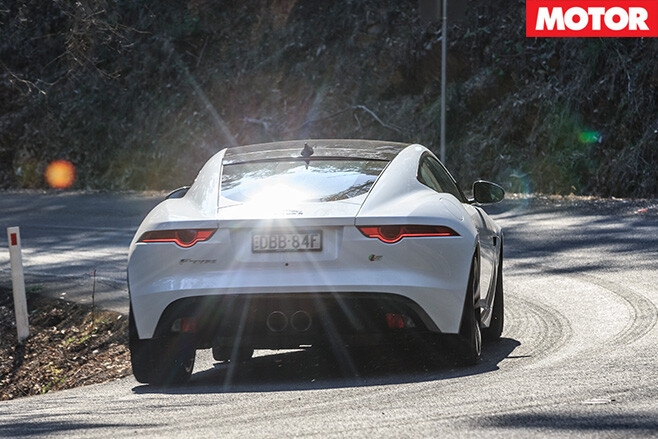 It’s a conclusion shared among the assembled test group. While Jaguar should be applauded for introducing the clutch pedal option, it’s clear that the modern breed of self-shifters can actually enhance the modern sports car experience.

For reasons only it knows, Jaguar has decided to spend a decent whack of money developing a six-speed manual ’box for the F-Type – hoorah! It’s available on the V6 models and will save you $5000.