A wall of F1 cars is just a small part of a 1000-strong collection of one-offs, motorsport stars and production classics hidden in secret bunkers Mercedes-Benz calls The Holy Halls.

A wall of F1 cars is just a small part of a 1000-strong collection of one-offs, motorsport stars and production classics hidden in secret bunkers Mercedes-Benz calls The Holy Halls.

MERCEDES’ temple to the car as a work of art is a dramatic nine-level aluminium and glass building. Designed as three overlapping circles, it houses 160 glistening cars and 1100% exhibits in 16,100% square-metres of floor space, or almost the area of the Sydney Cricket Ground.

By the time this architectural jewel opened in 2006, the museum located just outside the Unterturkheim factory gates at 100 Mercedes St, Stuttgart, cost Mercedes-Benz a cool $230 million. Worth it; since then more than seven million people (40 percent foreigners) have taken the tour through this giant atrium space with no straight walls and no closed rooms. 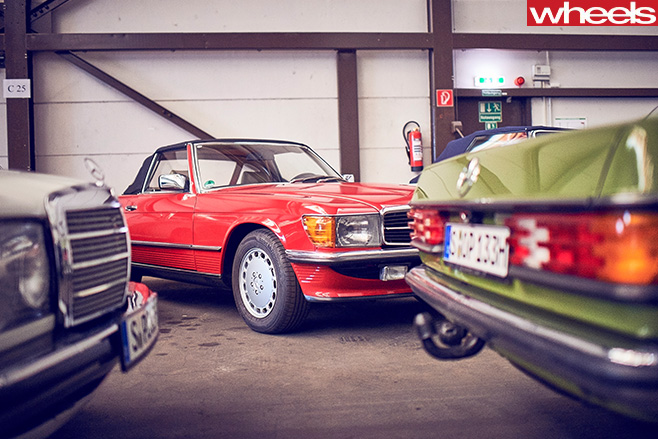 The museum is a monument to Carl Benz, the founder of the company that invented the car in nearby Bad Cannstatt in 1886, and replaces the first Mercedes museum that opened in 1961.

However, only seven kilometres away in Fellbach, a dreary industrial suburb of Stuttgart, is a far more fascinating, unheralded series of 11 warehouses that store an amazing collection of almost 1000 cars, everything from a three-wheel 1888 Benz to Lewis Hamilton’s 2015 championship-winning F1 car.

Mercedes calls them Heilige Hallen, the Holy Halls. They are the heart of the astonishing Mercedes-Benz Classic collection, and this visit by Wheels’ is the first time a media outlet has been allowed in with cameras. 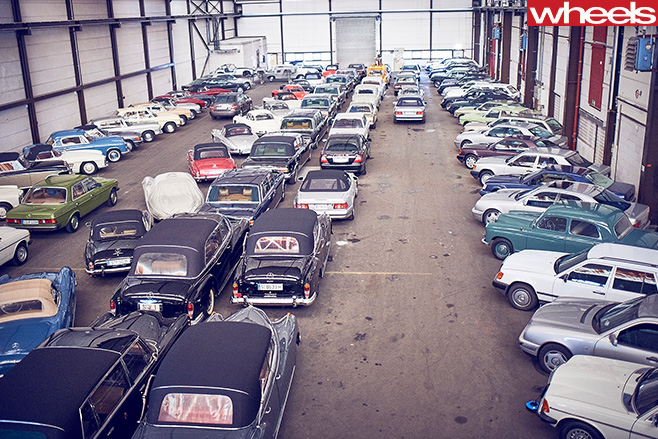 First, though, we go to the Classic Centre, opened in 1993, that is free to the public. Essentially a showroom for the sale of landmark Mercedes models, it’s clearly identified from the street. Most of the cars are duplicates from the collection, some are classics – like a recently sold 1929 Type 630 Kompressor and 1973 W113 280SL Pagoda – divided into three levels of quality, from fully restored to ‘Driver Edition’ (cars that still have potential for further restoration). Some don’t list prices on their placards, which is surely code for bring a lot of money. 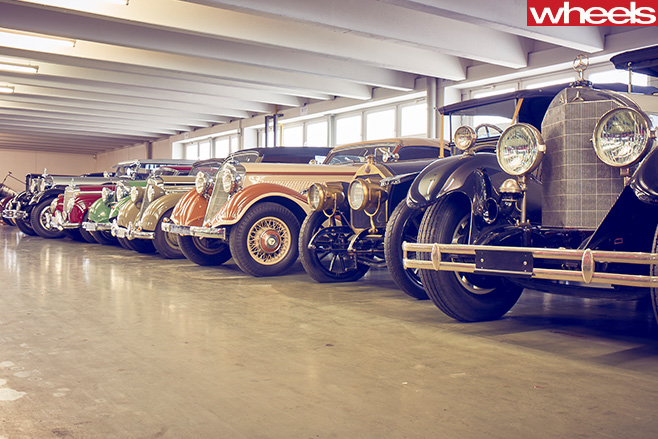 The detail is remarkable, yet somehow not surprising. On one reception area wall are cabinets displaying 1:18 scale models of the 190SL, each in a different colour. There are 113 models to show off Mercedes’ full colour range from the early 1950s period.

Immediately behind the showroom is the Classic Centre’s workshops, where a team of seven specialist mechanics work on maintaining the collection and especially those legendary models that are sent all over the globe, including Australia, for Old Timer events. Seventy percent of their work is for the collection and definitely not for sale, 30 percent for owners who want the best restoration and service available. 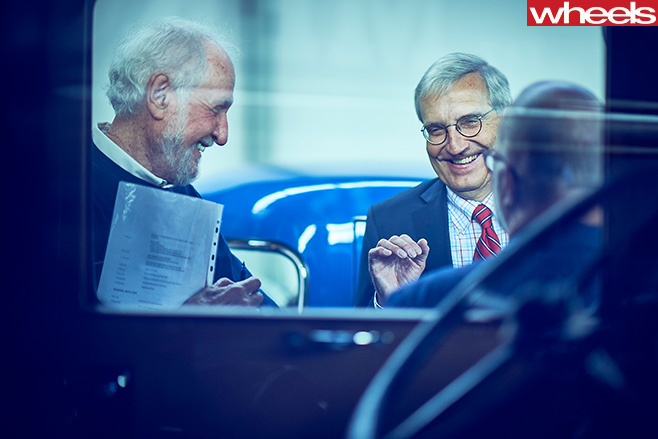 The Classic Centre has original blueprints dating back more than a century and can reproduce practically anything that can’t be sourced from the enormous spare parts catalogue, which totals 55,000 individual part numbers, including a choice of green or black spokes for the first 130-year-old three-wheeler. Cars constantly come in and out from the museum and collection, yet the atmosphere is calm and meticulous.

After my eyes adjust to the vast space, my brain begins to absorb the cars. A gullwing 300SL, an earlier 1952 racing SL sits on a hoist, there’s a 190E 2.3-16 Cosworth, a couple of SL Pagodas, an original SL spaceframe, a monster late 1920s SSK roadster and a ‘streamliner’ W196, Fangio’s 1954 French GP-winning car. It’s impossible not to reel in a daze, spellbound. Yet there’s much, much more to come in the Holy Halls. 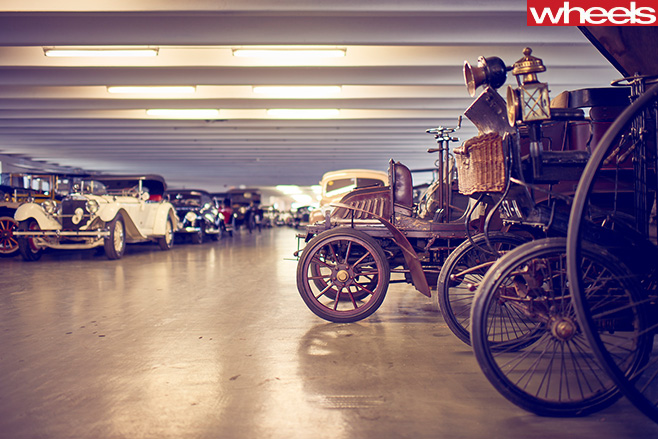 Scattered around Fellbach are a series of anonymous warehouses with 10-metre ceilings and a ring of small, dusty windows at the upper edges. There’s nothing on the outside to threaten their secrecy. These Holy Halls are an automotive archive so secret that until last year Mercedes-Benz banned all photography. Today, you still can’t take photos on smartphones because GPS tracking would reveal the exact co-ordinates of the building.

Every car is historically significant, whether it be a race winner, a record-holder, a concept, the last model of any series to come off the production line, or just a one-of-a-kind sample of rolling history. The Holy Halls are the supply chain to the museum, where cars are stored before rotating into the museum or classic car events. Some cars – especially modern F1 racers – are stored in hermetically sealed glass cases, stacked like scale-models until you get up close and see that they really are full-size. 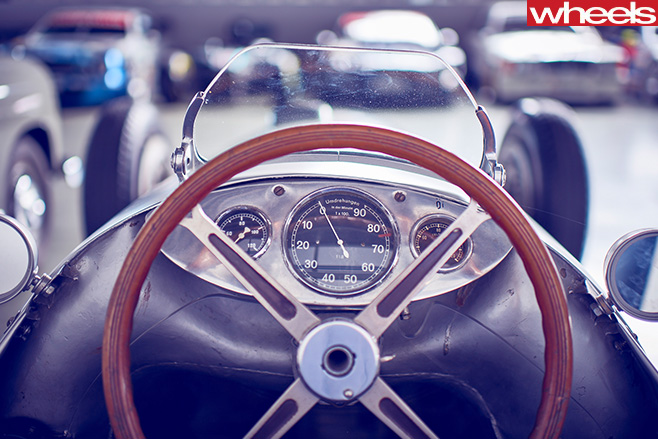 The Holy Halls are off-limits to the public, short of a personal invitation from a Benz boardmember. Wheels was invited to spend two days wandering three of the 11 halls, accompanied by Holger Lützenkirchen, who runs the collection, and local photographer Steffen Jahn.

Mercedes-Benz has been saving and storing important cars for more than a century. It’s company policy to keep at least one example of every production car it has sold. Every year, Mercedes adds 30-50 cars to the collection. It is currently looking for AMG models to round out next year’s 50th anniversary AMG celebrations, ideally with an example of every significant AMG model. 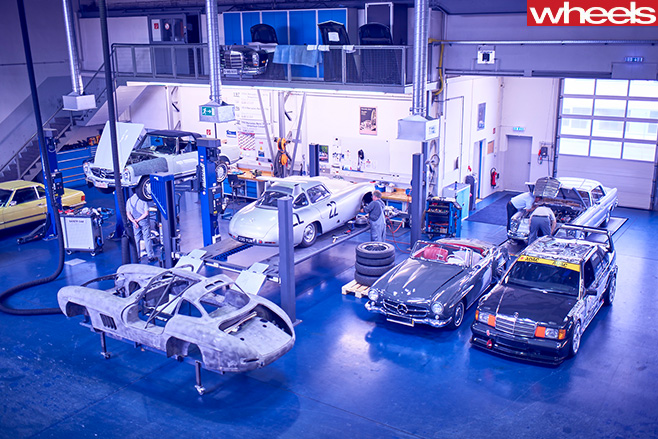 Not surprisingly, Lützenkirchen admits “we are always running out of space”.

An unmarked door set in a non-descript wall opens to reveal a tiny reception area and a door to a single toilet. There is no clue to what lies beyond the other door. The low hum of air-conditioning is the only noise, though I’m told there is a clever alarm system. The vast space is hangar-like in its floor area. And filled with cars. 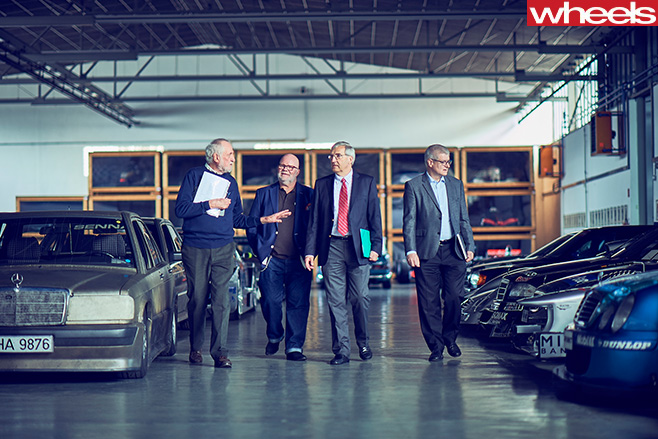 This hall is devoted to passenger cars. At first it seems they’re from the 1930s and 1950s, including examples of the rare 130, 150 and 170H models, the trio of aerodynamically efficient, rear-engine cars that Mercedes toyed with during the ’30s but quickly dropped due to poor sales and equally poor handling. As the mind grasps the incredible variety of models, including at least nine SL coupes and roadsters (the collection has 12 gullwings in total), it becomes clear that what’s here covers the history of Mercedes up to the 1990s. 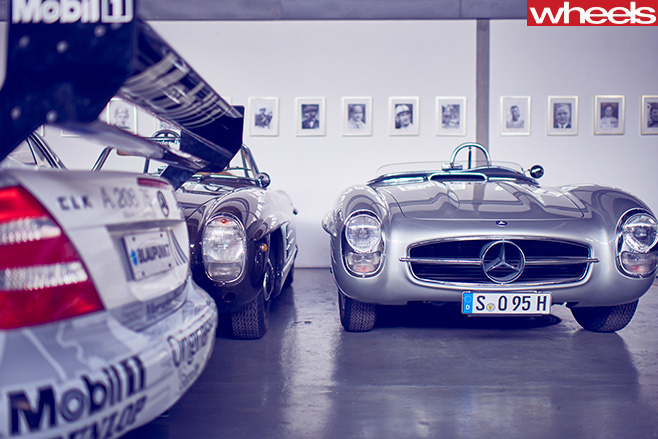 Weirdly, examples of the original ‘riding wagon’ of 1888 abound. It turns out Mercedes made 100 replicas during the 1960s and ’70s, and again in the ’90s, that were sold to collectors for $78K plus taxes, though the real ‘first car’ resides permanently in the museum.

An elegant 1938 320 combination coupe-convertible has a removable hardtop, surely one of the first. 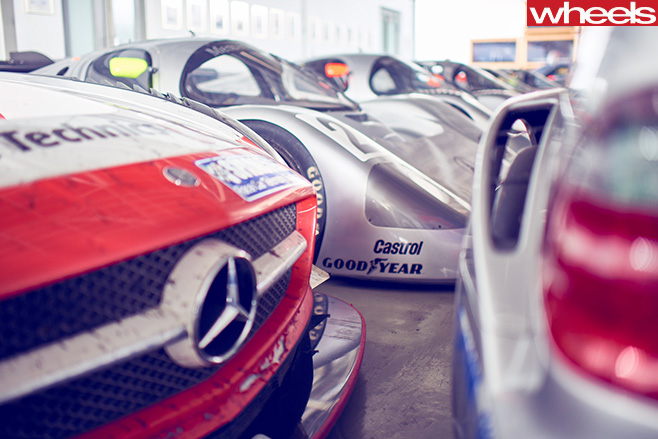 The long lines of cars stretch the imagination: 600 Pullmans, a lone W124 wagon, a virtually complete range of sedans, coupes and convertibles from the 1960s, some vast early 1920s machines and many veterans from the dawn of motoring.

A few hundred metres away we enter a second anonymous hall, this one devoted to racing cars: DTM, Indycars, F1, rallying and sports-racers including the Group C Saubers. At one end there’s a collection of about 30 more recent F1 cars: Petronas-sponsored Silver Arrows and Mercedes-powered Vodafone McLarens, most of them stacked neatly in bespoke, clear-fronted cells. And a row of six orange C111s, the gorgeous rotary-powered gullwing coupes that almost made it to production in the early 1970s. 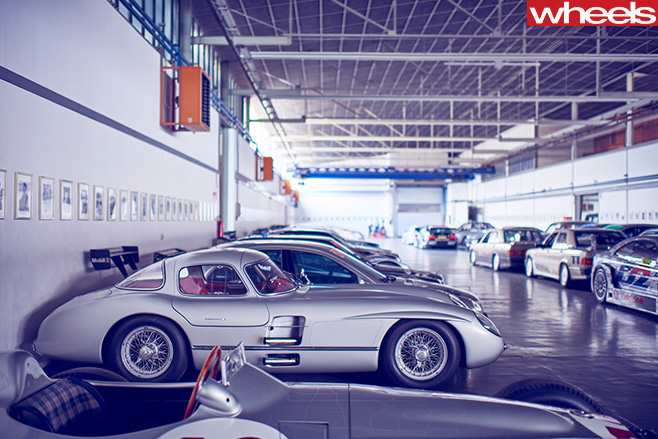 Around the walls, mounted in identical frames at head height, are some 250 black-and-white portraits of Mercedes drivers past and present. They’re all here: Fangio, Moss, Hamilton, Rosberg (junior), Hakkinen, Mass, Montoya, Ludwig, Stuck, Schumacher, Frentzen, Schneider and Wendlinger. Between them are photographs of drivers from motor racing’s first golden era, men like Caracciola, von Brauchitsch, Lang and Brit Richard Seaman, who was killed at the wheel of a Mercedes just weeks before the outbreak of WWII. 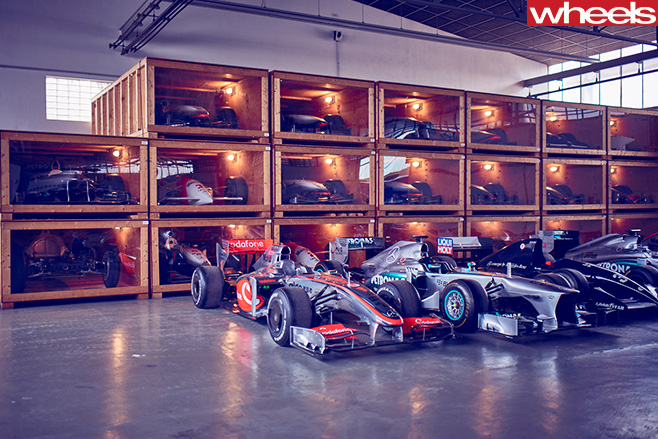 Move on past 300SLRs (the famous Moss 722 car is on almost perpetual display in the museum, except when it’s at a classic event somewhere in the world), a modern SLS 24-hour winner streaked in black rubber, past a W165, the 1.5-litre supercharged V8 one-off built to win a single race, the 1939 Tripoli Grand Prix, and eventually there it is, the most valuable car in the world (it’s insured for $94 million), the beautiful Uhlenhaut coupe. Just two examples of the coupe version of the 300SLR were built. When Mercedes pulled out of motor racing in 1955 after the Le Mans disaster in which more than 80 people were killed, the company’s board cancelled the idea of racing the 300SLR coupe. 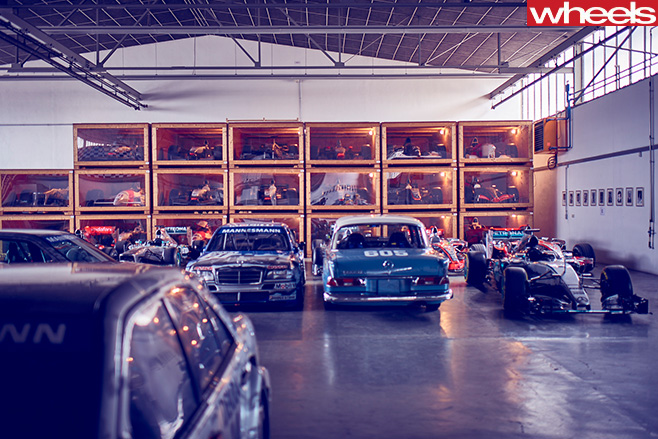 Rudi Uhlenhaut, the London-born engineering genius behind two generations of Mercedes GP cars, the sports cars of the ’50s and ’60s and most of the passenger cars from the same era, decided he would use one as his personal transport. Smaller than today’s Porsche 911 – 4350mm long, 1750mm wide and just 1105mm high – the 1265kg 300SLR Coupe is powered by the same 3.0-litre straight-eight from the 1950s W196 GP car and 300SLR sports-racer and makes 220kW at 7450rpm, enough for a top speed of 280km/h. Wheels carried a road test of the almost mythical Mercedes in the March 1957 issue and it cut a standing quarter-mile (400m) time of 14.9sec, staggering in the mid-’50s.

Mercedes’ commitment to the collection, and using it intelligently to promote the brand globally, is obvious. For the recent W213 E-Class international press launch in Portugal, Mercedes provided examples of nine generations of Mercedes-Benz E-Class for the journalists to drive. 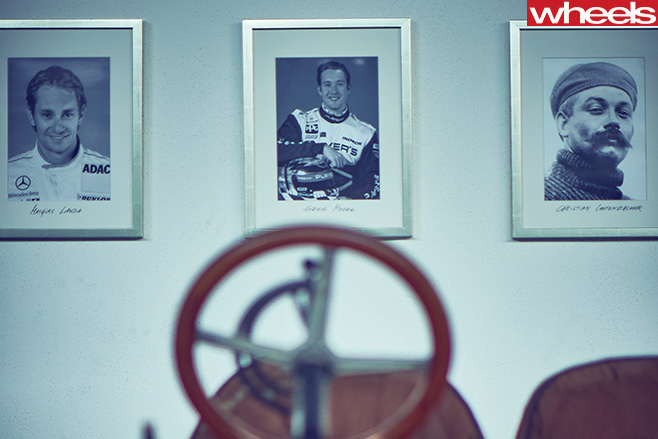 “It’s all about selling cars, not only for fun,” says Lützenkirchen, who drives a 1992 100%SL and a W124 wagon. “The collection is owned by Marketing.” In other words, running the museum, the Classic Centre and the Collection comes out of Marketing’s budget, though nobody is prepared to put a figure on the annual cost. Despite huge attendance numbers, even the museum runs at a loss.

“As long as the guys above appreciate what we do, we are okay,” says Jurgen Wittmann, who manages both the museum and the collection. A couple of days later CEO Dieter Zetsche tells us he is a great fan of the collection and its global work. 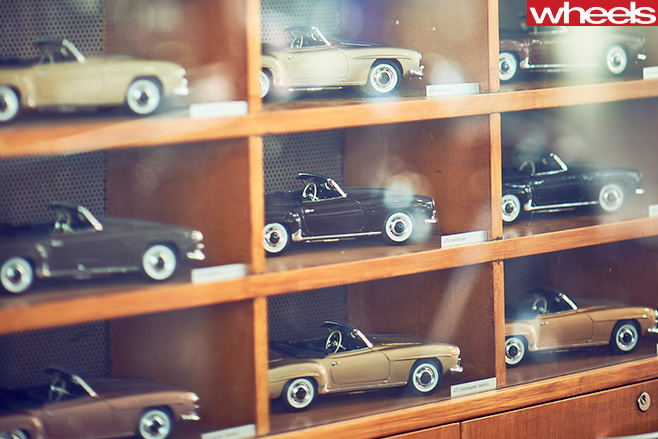 What, we wondered, happened to the cars during World War II when Stuttgart was heavily bombed by the Allies?

“The whole war was a nightmare,” Wittmann says. “We are aware of our history. We moved cars to various locations, mostly in the East. Some went to Polish and Czech dealers. Cars were hidden in tunnels and caves, some were sent to Dresden along with three million detailed blueprint drawings that miraculously survived unscathed.”

In 1989, after the unification of Germany, the Dresden Technical Auto Museum returned 12 cars. However, some that ended up in Russia have never been returned or even seen again. 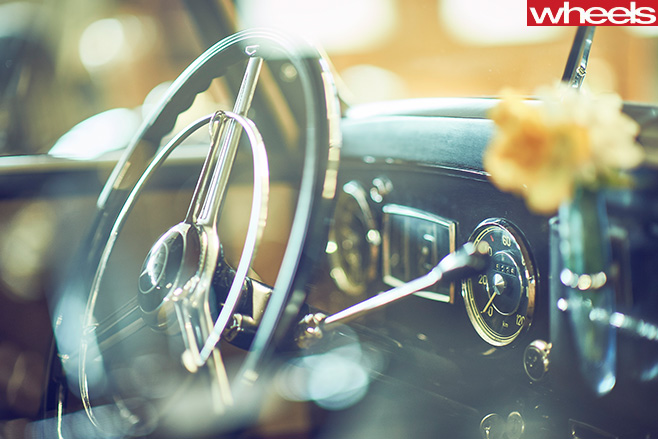 One of the famous Grand Prix cars that competed in the 1914 French Grand Prix (where Mercedes finished first, second and third) has disappeared. This car, which set the fastest lap, was on display in Mercedes’ showroom on the Champs Elysees in Paris when war broke out just weeks after the race. The car was seized by French authorities and later used by Baron Petiet, head of the French Motor Manufacturers Association. In 1939, after some negotiations with Mercedes, he exchanged the race car for a new 170H, the car arriving in Stuttgart in late August 1939, just days before the outbreak of WWII. During the war the car, along with an SSKL and Benz teardrop record car, was sent to Eisenstadt in Eastern Austria, never to be seen again.

Unlike this priceless and fabulous collection, which deserves to be seen, appreciated, and admired for the treasure that it is.

No other car company celebrates its past quite like Mercedes-Benz. Maybe that’s because none have a history as long, or as lustrous, as Mercedes-Benz.

Space shuttle Atlantis reportedly unleashed the force of 60,000 Corvettes when it took off on its recent final mission. Glenn Butler was there with just one, but still had a blast.