AFTER 24 movies spanning more than half a century, the Bond franchise has brought us some great cars.

Who can forget the iconic Aston Martin DB5 from Goldfinger, the scene-stealing submersible Lotus Esprit from ‘The Spy Who Loved Me’ or the beautiful Toyota 2000GT Roadster in ‘You Only Live Twice’? But for every hero car there’s a whole cornucopia of stinkers. We’ve lined up ten of the best here for your consideration - if you can think of any that are worse than this collection of clunkers, let us know in the comments or email us at wheels@wheelsmag.com.au

Renault 11
A View To A Kill was never a Bond movie for the connoisseur. Roger Moore’s final outing saw him at his most hackneyed and arthritic, the most entertaining sequences being those where the 57-year-old was forced to run. Moore himself stated that it was his least favourite Bond film, and mentioned that he was mortified to discover that he was older than his female co-star's mother. 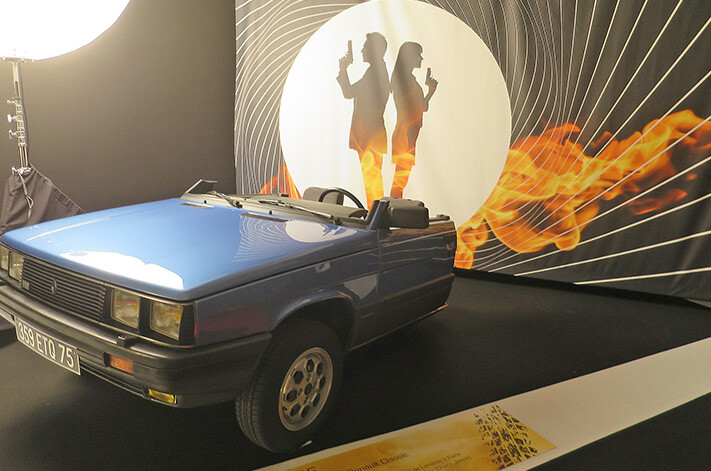 Perhaps it wasn’t age that did it for Roger Moore’s Bond career though. The final nail in his coffin was being seen behind the wheel of a Renault 11. This car waltzed off with the European Car of the Year award in 1982, but given that it joined such luminaries as the Citroen XM, Fiat Bravo and Nissan Leaf, perhaps we shouldn’t read too much into that. The 11 hatch, and its sister vehicle the 9 sedan, always felt like a tired collection of cheap components flying in loose formation and Bond’s chase scene underscores this fact when the vehicle is decapitated by a plastic car park gate. The 11 is later chopped in half by an errant Renault 20, something that might well have improved its ride and handling, before Bond abandons it, leaps off a bridge and lands in a wedding cake while wearing a tuxedo. Game over, Rog.

Volvo S40
Prize for most obscure car JB ever drove? That could very well be the unassuming Volvo S40 rental that Daniel Craig drives in Quantum of Solace. Towards the end of the Pierce Brosnan era, Ford went a bit crazy with its product placement, loading the movies with cars from its subsidiary brands, Aston Martin, Jaguar, Land Rover and Volvo. This carried over into the early Daniel Craig films, the Volvo Bond drove to Bregenz being a metallic grey S40 T5 R-Design. In case you were wondering, it was also specified with power seats, an armrest/cupholder, Premium Sound 6 CD player and came with a can of mobility tyre sealant. 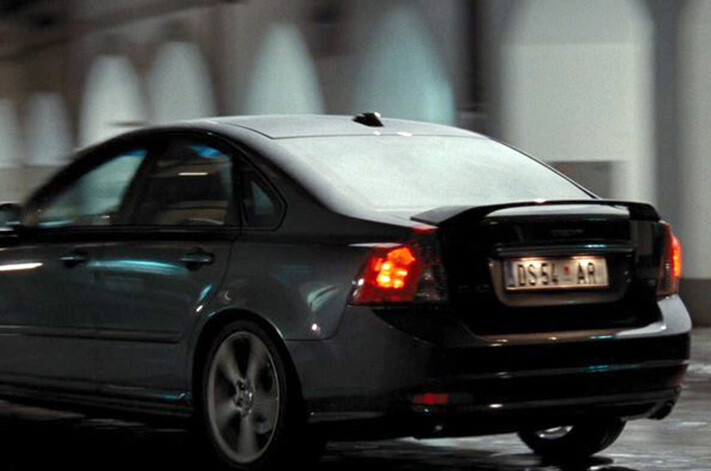 The S40 never won European Car of the Year, so you know it has some merit. Essentially a Ford Focus in a pretty suit, it would actually make a good car for a spy – fast, low-key and reliable. Thing is, we don’t watch Bond films for realism. We don’t want to see Bond having the usual argument with the rental agency desk staff that he doesn’t need Collision Damage Waiver because his holiday insurance already covers kerbed alloys. Let’s face it, the world’s greatest secret agent probably shouldn’t be mistaken for a printer cartridge sales rep.

BMW Z3 1.9
Another era, another piece of crass product placement. Powered by a mighty 1.9-litre four-cylinder engine, the BMW Z3 that Pierce Brosnan drove in his debut, Goldeneye, didn’t have enough power to shift a hair from his immaculately-moulded coif. Q branch had considerately made the car bullet proof, fitted Stinger missiles behind the headlights, given it a radar system, a self-destruct mode and an emergency parachute braking system, for when the 103kW became too terrifying. 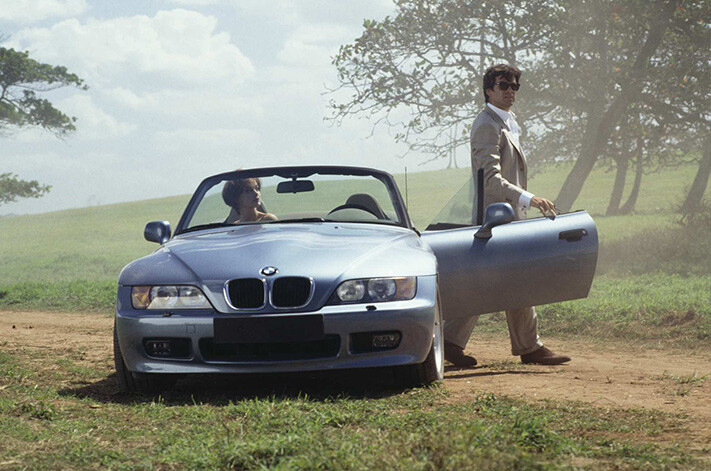 Given the amount of extra kit loaded on to the Z3, it wouldn’t have struggled to outrun an enthusiastically-piloted mobility scooter, but back in 1995 it was shiny and new and a big plug for BMW. Fortunately Brosnan didn’t actually drive the car very much, the producers perhaps keeping it to the contractually mandated minimum, and he wisely traded it in for a light aircraft.

Citroen 2CV
Step up a performance bracket from the wheezing Z3 and you arrive at the yellow Citroen 2CV used in the 1981 jaunt For Your Eyes Only. Bond found himself in a 2CV after some crook looked askance at his Lotus Esprit’s wiring loom and the car spontaneously exploded. He chivalrously demotes its crossbow-wielding lady owner to the passenger seat and then proceeds to show her the sort of moves that, for some reason, Victoria Police take offence to when performed in the safe and controlled environment of a McDonald’s parking lot. We’ve no real objection to Citroen’s tin snail and the chase sequence was clearly played for laughs, but the destruction of a few Peugeot 504 villain cars seems a bit of a waste. You just can’t get the henchmen these days.

Ford Mondeo 2.5 ST
You could see the look on Daniel Craig’s face. “My first Bond film and I’m driving a Ford bloody Mondeo?” Well you could have if he wasn’t wearing sunnies and possessed of all the emotional range of a sponge. Things got better later in the movie when he was upgraded to an Aston, but the opening scene in the Bahamas sees Bond appear in the Ford, like some sort of vacationing key account manager. The car was required for filming early in 2006, more than a year before this generation Mondeo was actually launched, so the car in the movie is a one-off, hand built at Ford of Europe's Design Studio in Cologne and transported to and from the set under wraps. The Mondeo and the Sony-Ericsson mobile phone with satnav smacked of grubbing product placement. Not a great look.

Triumph Stag
Sean Connery was one of the pioneers of on-screen identity theft as he ‘became’ Peter Franks in ‘Diamonds Are Forever’, purloining Mr Franks’ Saffron Yellow Triumph Stag and driving it onto a hovercraft. It successfully negotiated the 400 metre journey onto the vessel without overheating, suffering an alternator failure or lunching its valves which marked it as one of the better examples. Still, perhaps the Stag was the perfect vehicle for ‘Diamonds Are Forever’ – superficially good looking and within reach of greatness but ultimately compromised by a certain neglect of detail.

Leyland Sherpa
Watching ‘Jaws’ dismember a Leyland Sherpa van in ‘The Spy Who Loved Me’ wasn’t unlike a class trip I remember, where our school’s Sherpa was systematically destroyed from the inside out during a visit to the Science Museum. We didn’t have Roger Moore to casually regurgitate a series of sexist one-liners to Barbara Bach. Instead we had Mr Cunliffe who spent all day walking around the museum with a giant penis drawn onto the back of his shell suit. 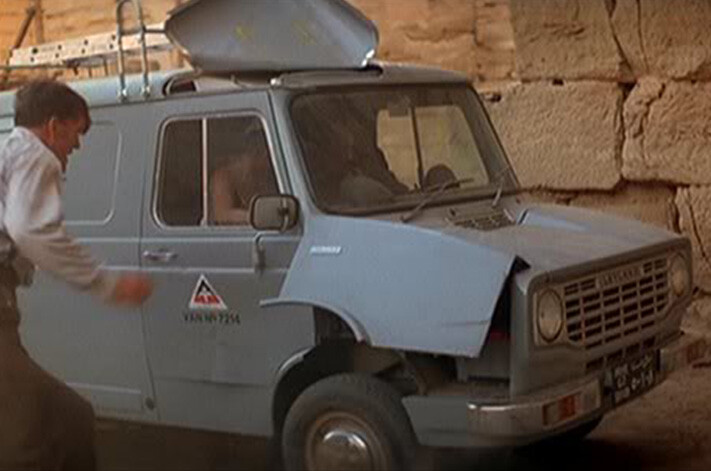 Cheap, rear-wheel drive and tough enough to withstand the depredations of an angry man with acromegaly and limited access to composite dental fillings, the Sherpa almost earns our grudging respect.

AMC Hornet
It’s hard to watch ‘The Man With The Golden Gun’ and not get overly absorbed in Scaramanga’s third nipple, but if you can look beyond this particular show stopper, Bond’s corkscrew jump over a Bangkok klong in an AMC Hornet is well worth your time. Brit stuntman Bumps Williard was relying on the outputs of a Cornell University computer program and a team of experts who had modified the Hornet with a central steering wheel and more suspension compliance. 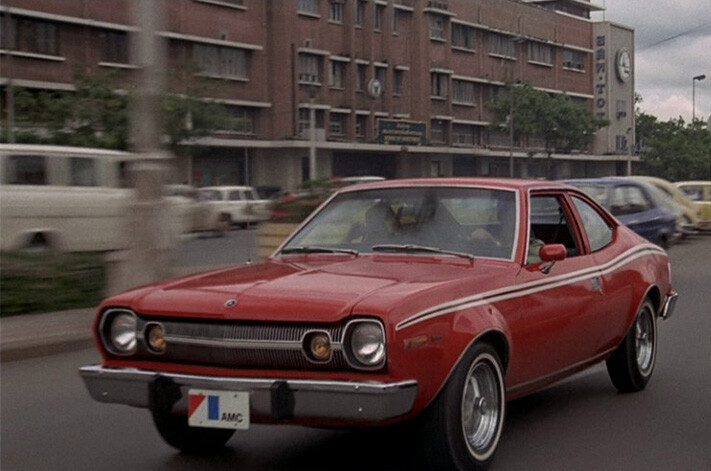 It’s one of the greatest Bond stunts of all times but it doesn’t gloss over quite what a munter the Hornet was. It’s almost as if director Guy Hamilton couldn’t resist lampooning its ineptitude by playing a corny penny whistle over the stunt’s slow-motion profile shot.

Lincoln Mk VII LSC
There are worse cars than the Lincoln Mk VII Luxury Sport Coupe that appeared in ‘Licence To Kill’. On the plus side of the ledger, it had a five-litre V8 and, well, now I’m struggling, but the issue with this car was tone. It just looked so wrong for England’s super-spy to be climbing out of a car that you’d probably more readily associate with a Taco Bell franchisee. Maybe that’s the genius of the Dalton movies; that he did things you wouldn’t immediately expect. Things like driving an uber cool Audi 200 quattro or exploding villains in decompression chambers. Ultimately he was hamstrung by acting in films that, for the first time in the Bond franchise, had nothing to do with Fleming’s original works whatsoever. That and driving a Lincoln coupe.

Everything in ‘Die Another Day’
Where to start with this one? ‘Die Another Day’ is a true collector’s piece, the alpha and omega of bad Bond. It’s Brosnan at his cheesiest, with joyously horrible CGI, laugh-out-loud silly stunts, Madonna as a fencing instructor, invisible cars, almost continuous explosions and $70m worth of paid-for product placement. For the ludicrous ice driving scenes, the stunt Aston Vanquish and Jaguar XKR cars were completely stripped of engine and running gear. 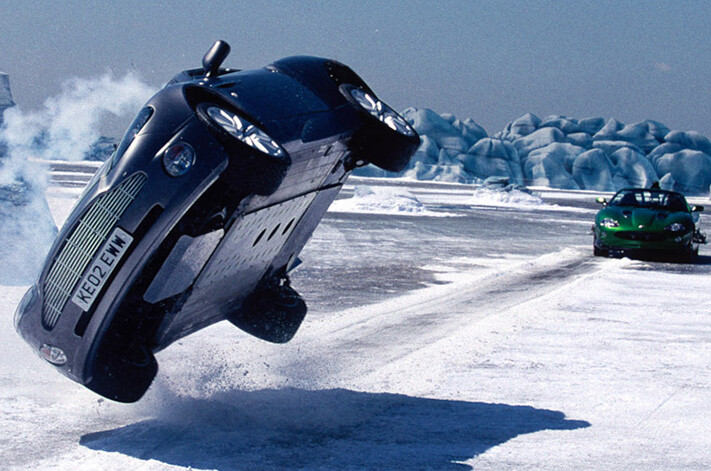 These were replaced by the Ford V8, transmission and all-wheel drive running gear from a Ford Explorer. To really cap off the movie, Ford even released a half-arsed limited edition Thunderbird. It was much like Halle Berry’s car in the movie but featured a 007 plaque on the instrument panel and the wrong-coloured roof. Enough said.