We drive the future of motorsport

It’s the race category manufacturers are flocking to in order to fast-track their EV development. But with road-related rubber and no shrieking engine note, what is a Formula E car actually like at the limit?

MINUTES earlier, DS Performance technical director Thomas Chevaucher had leaned into the Formula E car’s cockpit and asked me not to crash.

This, we agreed, was a great plan.

DS Performance had brought just one of its DSV-02 all-electric single seaters to Circuit Dreux near Paris, I was about to be the first journalist to drive it, and we were interrupting DS driver Sam Bird’s test. Crashing would be expensive, inconvenient and embarrassing. It seemed like a really bad idea.

But now I’m heading down the back straight, closing rapidly on a hairpin, and as I go from full acceleration to full braking I see the top of the treaded tyre stop rotating before I actually feel that I’ve locked the brakes, and sense the back of the car stepping out of line. Things are not playing in slow motion like people always say they do; in fact, I’m pretty sure they’re speeding up – the grass and barriers certainly are. 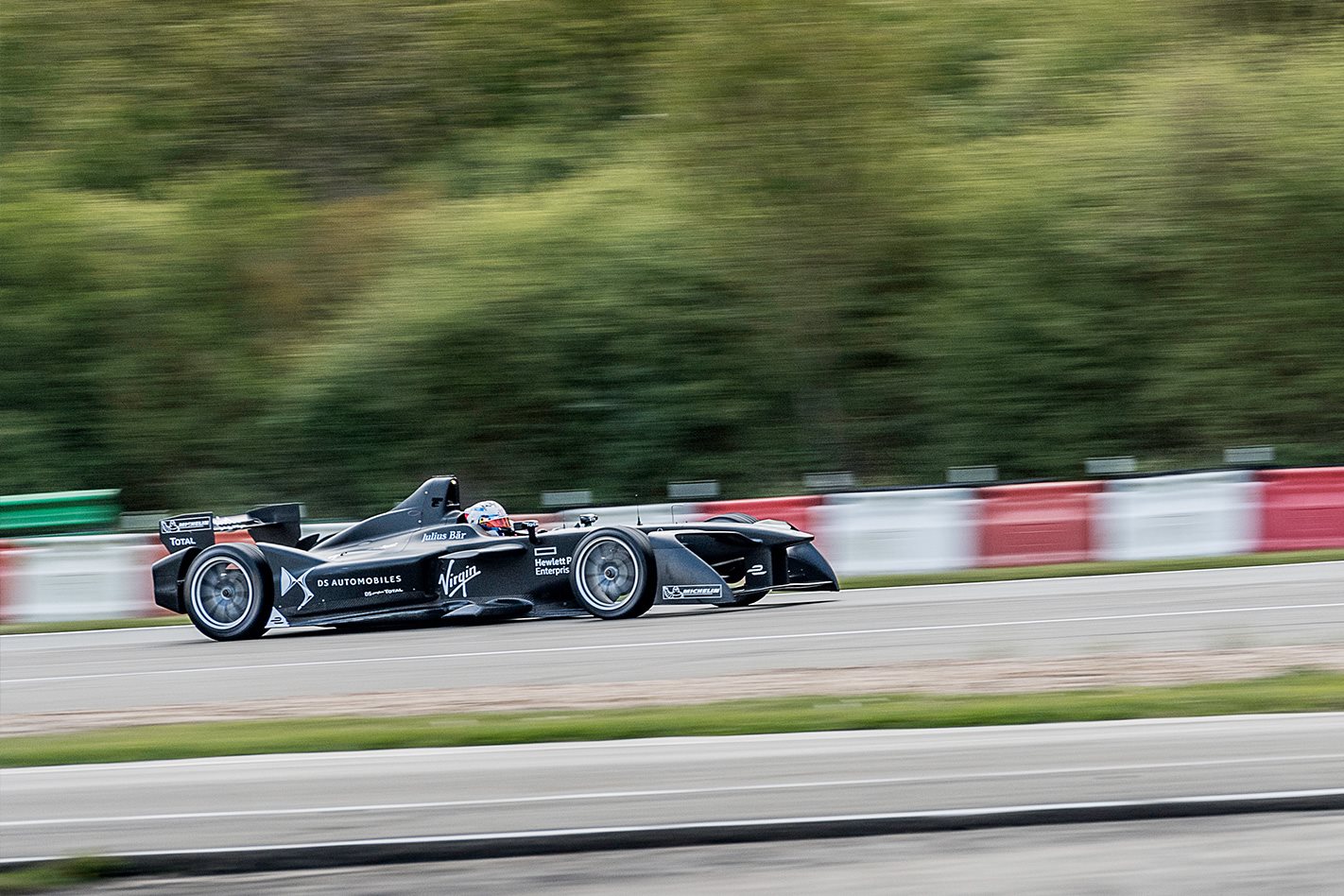 There’s a noise like a US police car siren behind me as the electric motors whir, I come off the brake pedal before climbing back on it, add a little twist of steering, and just about make the corner, driving back through my own tyre smoke. I don’t think Chevaucher will be pleased. But come on, I can’t just trickle round for photography and tell you I’ve ‘driven’ a Formula E car; we’re here to feel what it’s like to drive an electric race car as fast as we can. While definitely not crashing.

Formula E is the all-electric, FIA-sanctioned championship that races 12 times a year on temporary street circuits globally. It’s about to enter its fourth season, and it’s on a roll. A roster of ex-F1 drivers adds TV-friendly stardust, and manufacturers are taking the series increasingly seriously. 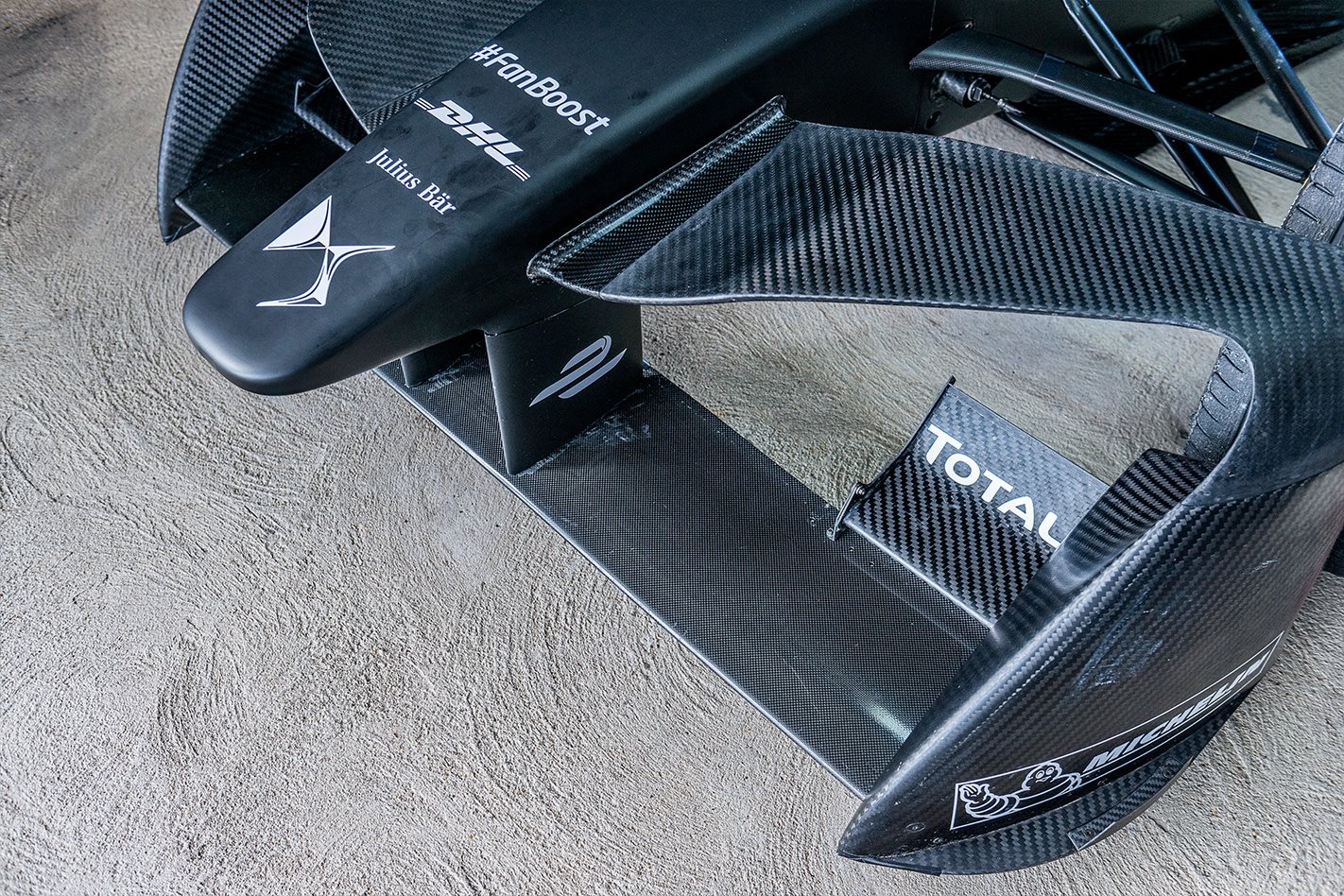 Of all the major manufacturers, DS is the least familiar name, but it’s no less significant. DS Automobiles is the luxury arm of Peugeot-Citroen, DS Performance its high-performance division. In under 18 months, there’ll be an electric DS road car, as previewed by 2016’s E-Tense concept. The engineers are adamant that lessons from Formula E are filtering down into the production car’s development.

To control costs, the Dallara carbonfibre chassis, front suspension and aero package is common to all Formula E competitors. The grooved 18-inch tyres are also universal and used for both wet and dry races. They’re much more comparable to road cars than the steamroller 13s seen in F1 and with thinner sidewalls the suspension has more work to do on bumpy street circuits.

The rear suspension design is the only component of the chassis that offers scope for the team to adjust, but the powertrain is a different story. The 700-volt lithium-ion battery is common, but the electric motor, three-speed gearbox and inverter are to DS Performance’s design. 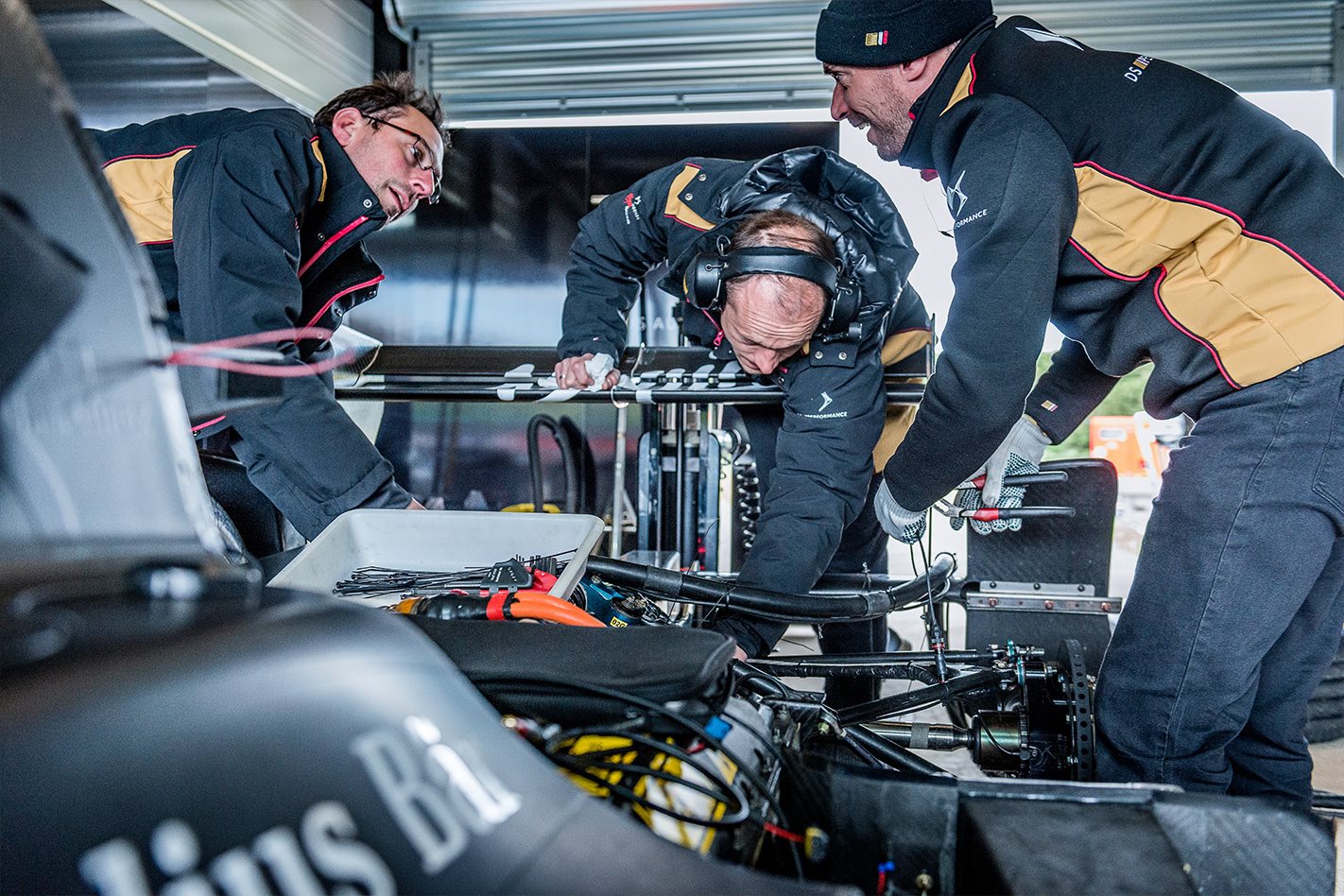 Unusually – but logically – teams are also free to calibrate software. It’s here that they glean deeper insights into energy consumption and conservation, underlining the race-to-road relevance. For now, the batteries take 50 minutes to charge and last half a race – the drivers pit for a different, fully charged car – but from season five they’ll do a race distance.

‘We are two years in advance of road cars,’ says Chevaucher. ‘We don’t share technology directly, but it’s the understanding that’s important.’

Driver Sam Bird finished fourth overall last season. He explains that while a Formula E car might feel quite alien to drive in some respects, fundamentally it’s a single-seater with four wheels, two pedals and a steering wheel. Driving one fast isn’t really the hard part if you’re a professional race driver. The strategy of conserving the electric battery and harvesting energy while racing rivals wheel-to-wheel is the challenge. 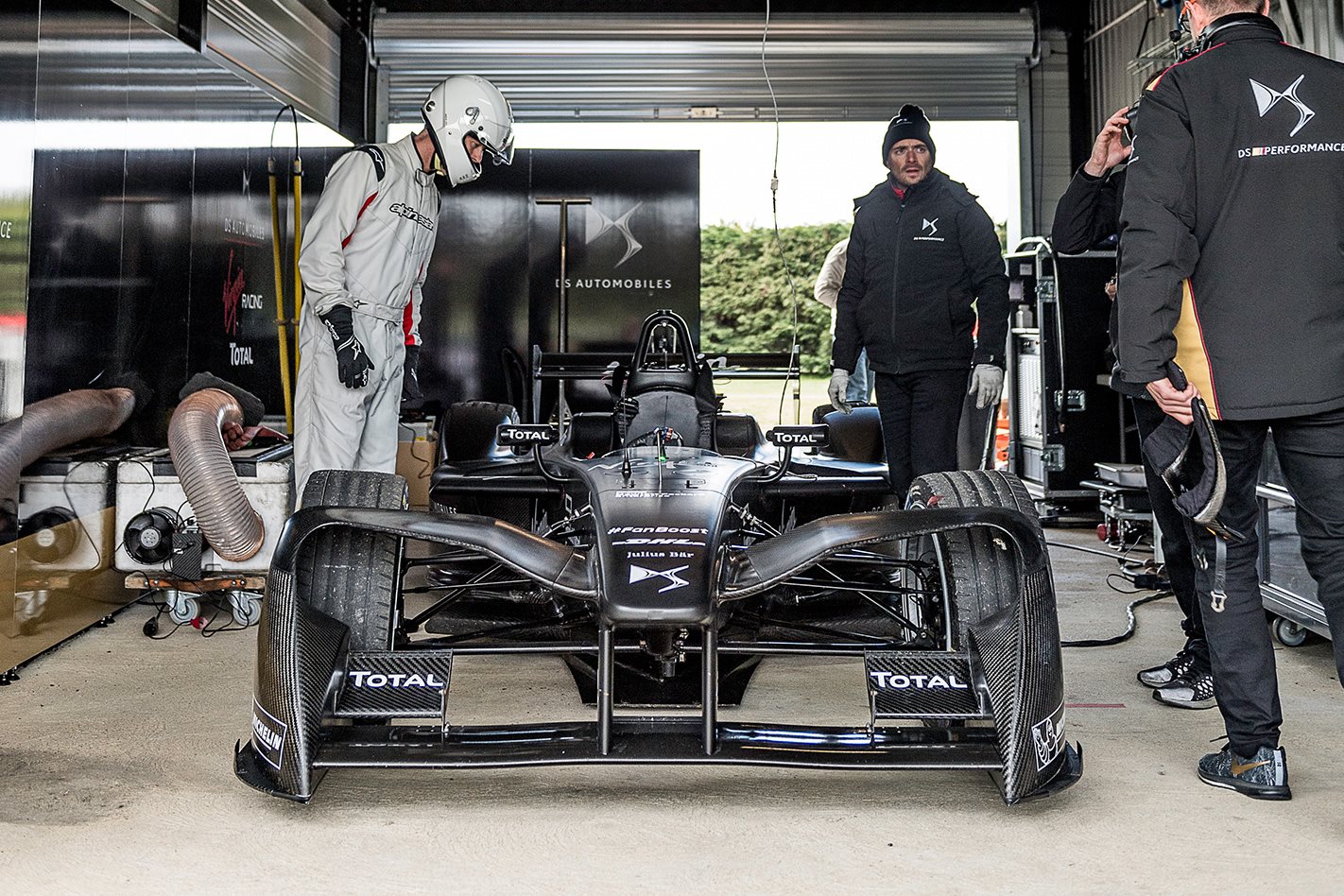 “We have 28kWh of energy, and you have to use it wisely,” he says. “We don’t drive flat out, but we’re within one second per lap of that and saving around 20 percent of the energy – down from 1.4kW to 1kW. But then we don’t get full re-gen until the battery is at 80 percent charge, then you have to remember to put the brake-bias further forwards to compensate for the extra braking that re-gen puts through the electric motor at the back.

“I’ve done GP2, World Endurance, and this is the most difficult by far. We’ve got drivers like Buemi, da Costa, Lopez, Vergne, and they’re all world class, 20 of us within an inch of each other. I think that’s exciting for the fans, as well as relevant to where we are on the planet today.”

I climb in the carbonfibre chassis, backside low, feet straight ahead, legs bent a little more than I’d like, head rest clipped in afterwards and only just clearing my shoulders. Chevaucher attaches the steering wheel, explaining that the middle paddles control the gears, while the top right paddle is for Fanboost. Fans can vote on social media, providing the most popular driver – usually di Grassi – with an extra burst of energy. With just a few engineers looking on anxiously, there’s little chance of that today. The bottom right paddle is for re-gen. Mysteriously, the purpose of the top and bottom left paddles remains secret. 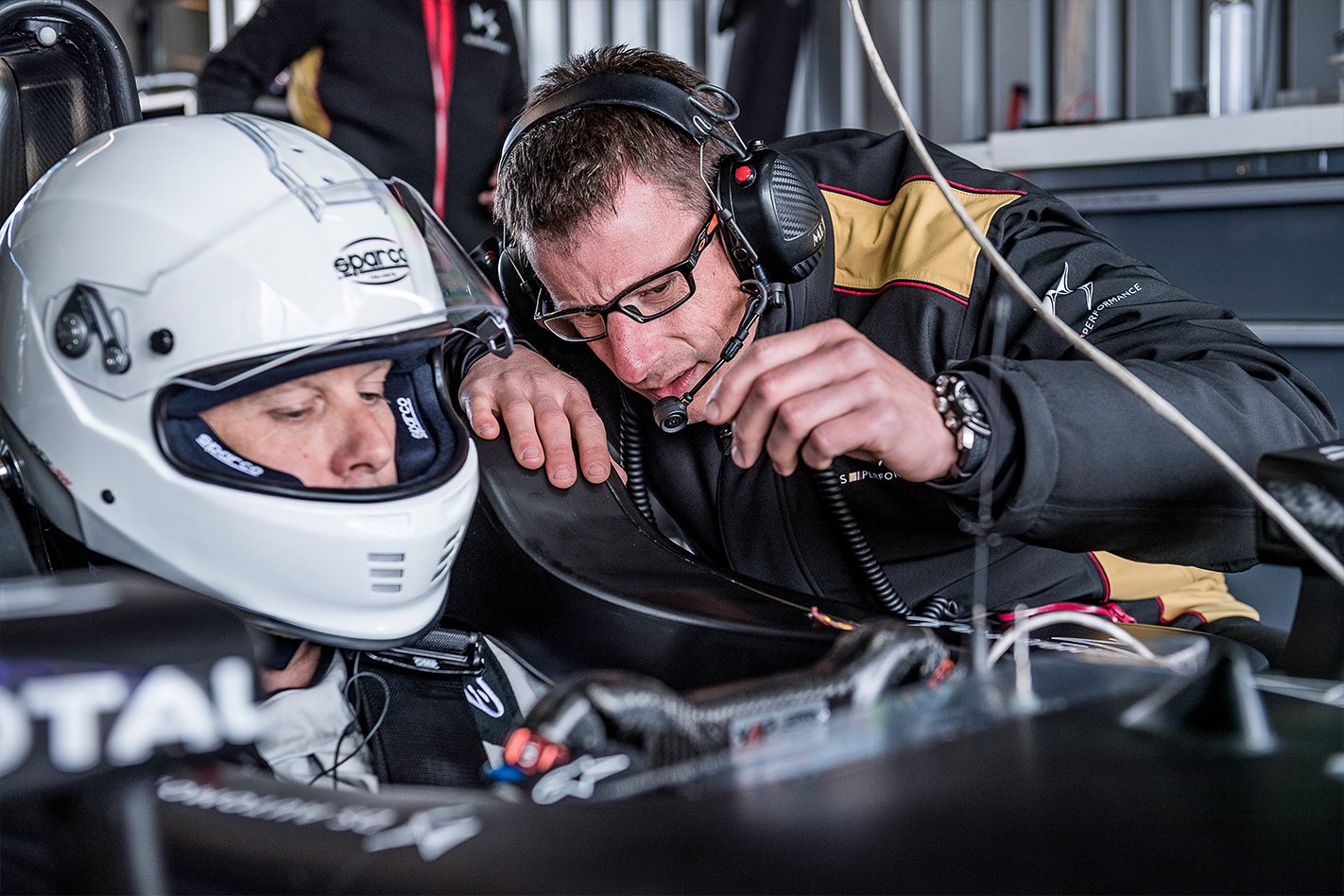 Formula E cars produce 170kW and weigh around 800kg, which doesn’t suggest outlandish performance. But as I accelerate from a standstill, the torque kicks instantly, the rear rubber bites hard despite being way past its best thanks to Bird’s earlier outing, and I’m pushed back in my seat, flung down the straight, hitting 100km/h in three seconds or so.

The sensation of light-switch thrust is similar to a Tesla in Ludicrous mode, but your backside is almost skimming the asphalt, and the vacuum of conventional engine noise is filled by a barrage of wind noise like you’ve jumped from a plane in a wing suit. The car is far from completely silent, though: there’s transmission whine and the fizzy bass of the electric motor, which rises and falls in line with acceleration and deceleration like a synthesiser’s pitch bender. It’s a very alien soundtrack, but one that isn’t without appeal.

The torque means you can stay in one gear the whole time, and Chevaucher says the gears are really there to help energy conservation, but it also feels natural to use them for performance. There’s a clunk as you pull back the paddleshifter, the familiarity of mechanical engagement amid all the strange whizzing and whirring. 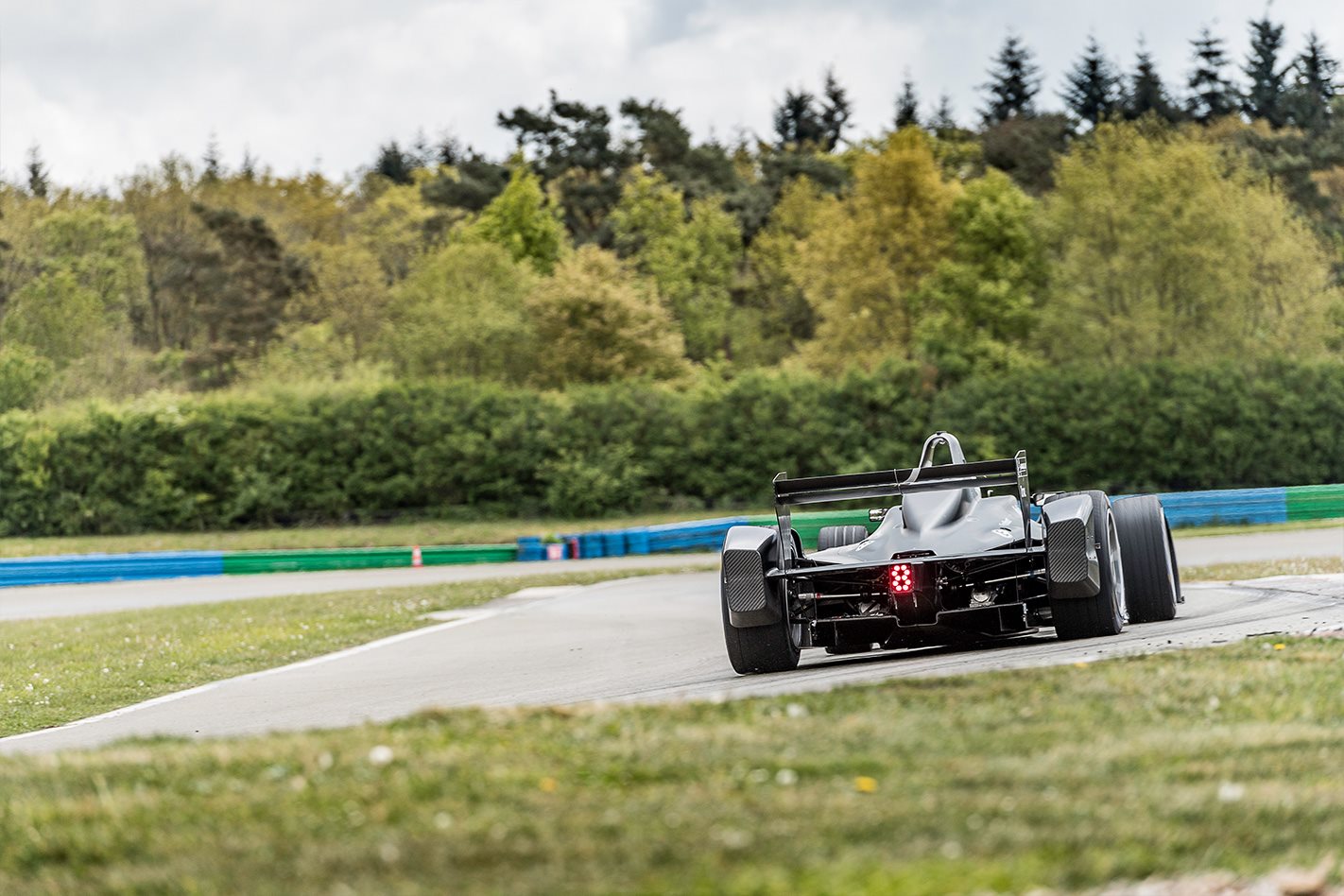 The steering, too, is resolutely analogue. Arriving at the first corner, it feels light and communicative, the turn-in super-direct. I reckon a go-kart would be harder on your arms over a race distance, and Bird confirms that, really, the g-forces aren’t that high, the cars not especially physically demanding.
The brakes, in comparison, are incredibly firm, and you have to press deep into them to kill speed. The tight cockpit bisected by the steering column means you have to left-foot brake.

Wary of destroying the car and of its worn-out tyres, I’m perhaps a little over-cautious in the faster corners, but I’m never really aware of an aero effect, and the DSV-02 is quite car-like in the way it shifts around slightly beneath you. Feed in throttle as the corner straightens and the electric racer gathers speed with the kind of runaway intensity that makes you tense and smile all at the same time.

Exiting slower corners, the front tyres start to scrub slightly. A Formula E car does have a higher percentage of its weight at the rear than a typical single seater, and maintains that balance because it doesn’t burn fuel; perhaps that contributes some understeer. Yet if you’re just a little greedy on the throttle, it’ll oversteer eagerly, especially in second gear. You need to be quick with corrections, but it’s a lot of fun. 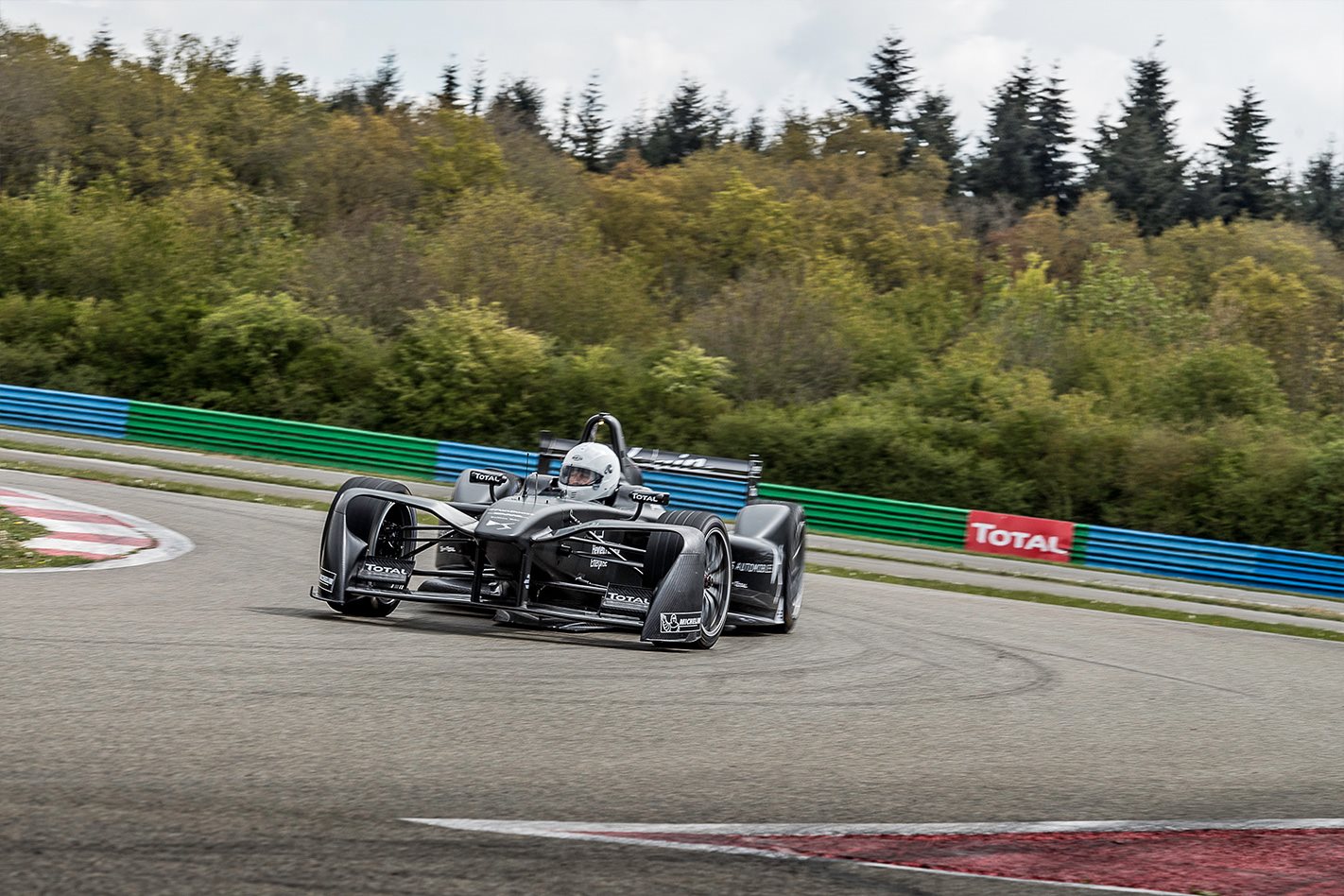 Familiarity with car and circuit increasing, I start to take more kerb and cut corners more heavily, following Bird’s advice. Diving into a fast left-hander, I cut the left wheel slightly into a dusty compression and tense up, expecting a large thwack through the chassis, but it softens it all off like the wheel never left the circuit. The compliance is unreal, and essential on street circuits.

Earlier, Bird had told me to hold out for the brake board at the end of the long back straight, and I swear he’s shifted it 50 metres upstream as a prank. It feels very, very late, especially as the speed is escalating so quickly as you hold out for the marker.

Towards the end of the stint, I steel myself to brake maybe just very slightly earlier as the hairpin zooms up. I feel the brake pressure build up hard, and it’s then that I have my lock-up. Bird says the grooved tyres are easy to lock, but are more resistant to flat-spotting than a slick. 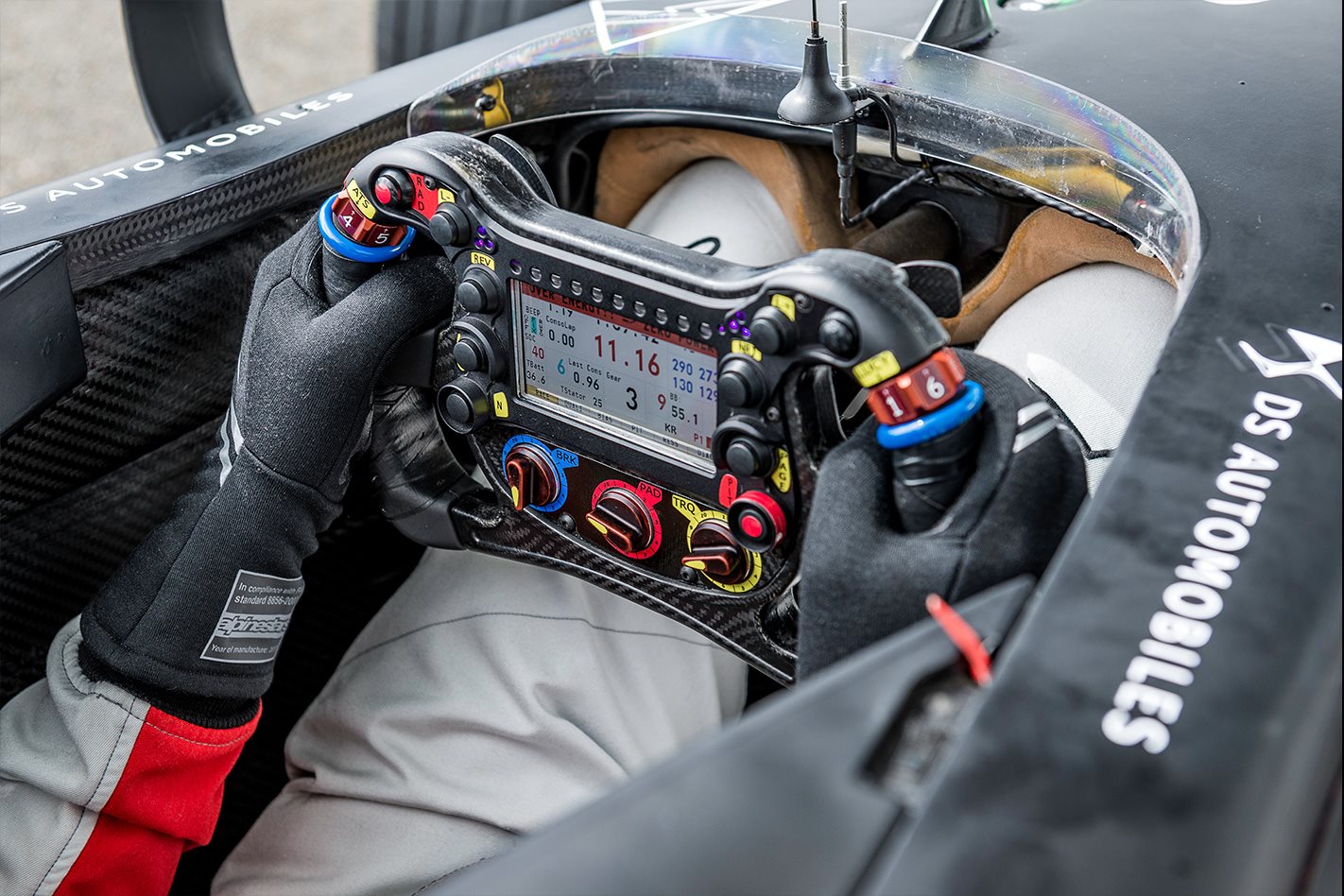 I’m already getting mentally overloaded, but in races, Bird will blend his braking with a pull on the re-gen paddle to feed more energy back into the battery, and sometimes brake even later because he’s going just a little slower to conserve energy.

Understanding what he’s doing is relatively simple, but how he strings it all together during a race as a pack of world-class drivers bear down on him is incredibly impressive.

Me? After about eight laps, I’m about five seconds off Bird’s pace. During a race, I’d be running around like a stray safety car. But I’m happy enough with that, and even happier to bring it home in one piece.