Like many companies in the Australian four-wheel drive industry, 4Way Suspension had very humble beginnings. In 1985, company founder John Agostino imported a set of shock absorbers from the US for a mate.

“I used to be a Qantas flight steward and Frank Zofrea, who was spare parts manager of G Brothers at Mona Vale (NSW), a Mercedes-Benz dealership, asked me to bring back a set of shock absorbers for a Type 1 Beetle, for the very first Bourke to Burketown Bash that his boss, John Guberina, was entered into,” John says.

The shocks performed so well that John Agostino started importing them, operating out of a small office in the spare parts department of G Brothers. “For three years, that’s what I did,” he says. “Until 1988, [when] I took some time off from Qantas; I was off for about 10 months to get this thing going.”

Things weren’t easy in the early days. John was working long hours, but wasn’t making money. Times were tough. “In that 10 months I had lost a lot of money and the choices were to walk away or leave Qantas and give it a shot.” 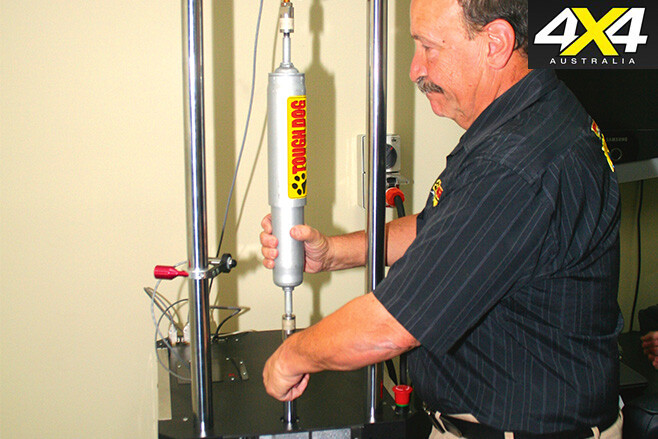 With interest rates at around 19 per cent in 1991, being in debt was not good, so John and his wife sold their house to finance the fledgling business. And it wasn’t just high interest rates that were challenging the business.

The suspension brand that 4Way originally imported from the US was called Bulldog, and when Mack Trucks – the truck manufacturer with the bulldog logo – got wind of this, it threatened to sue. “That’s when Tough Dog replaced Bulldog,” John says.

To grow the business, John knew it was imperative to develop new product and grow the range, but that would require funds. From 1991 to 1992, John produced a cab-mount for the International T-Line truck, which the company (now Iveco) then fitted as original equipment.

“They spent between $30,000 to $50,000 per month, for the next four years or so, and that’s what took us to the next level, and gave us a little bit of money to start developing some products,” John recalls. 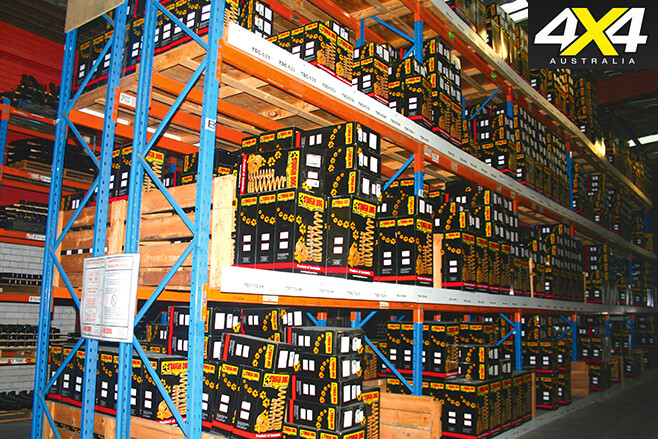 4Way then secured the exclusive rights to distribute the externally adjustable shock absorber in Australia. “We then developed that product,” John said.

“We developed the struts and it made us fairly unique, because it was the only 40 and 45mm externally adjustable strut on the market. It took a while, with a lot of development to get it right, but we put in place certain procedures and we did in fact get it right.”

These days Tough Dog suspension components are sourced from all over the world, with some components produced locally, others in the Americas and others in Asia, but nothing is shipped out of the 4Way Suspension facility without first being thoroughly checked in-house. 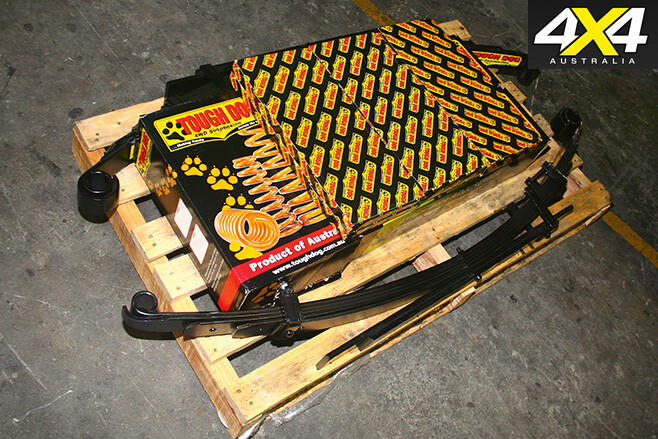 “Our coil springs are manufactured in Australia, to our specifications. Our leaf springs were manufactured locally for a good 23 or 24 years, but to maintain a competitive edge with leaf springs, without compromising on the quality we are known for, we were forced to reassess our options.

“Our urethane shackle bushes are manufactured locally. Again, it’s dearer, but we prefer the quality, and that’s a very integral part of a leaf spring… There are certain key elements that we still prefer to get made here in Australia.” And that philosophy is adhered to at 4Way Suspension’s local distribution centre in Sydney’s west.

“We make sure that we bush and finish every shock absorber in-house,” John said. “There are three physical checks, so by the time it goes on the shelf it’s signed-off, has initials with who manufactured it, the date it was manufactured, and who’s checked it off. So when it gets to the other end, it’s what [the customer] is supposed to get.” When it comes to shock absorber options, Tough Dog undoubtedly has the biggest range in the country. For many vehicles, in addition to the standard foam cell shock absorbers on offer, there are optional units including Nitro Gas, 40mm Adjustable, 45mm Adjustable or 53mm Big Bore ‘Ralph’ shock absorbers. “One of the things we wanted to do was make a product for different applications rather than one-size-fits-all,” John said.

“Most of our competitors have one shock absorber, and they make it for all applications. And you know, for probably 80 per cent of applications that’s fine, but when you get the guy who puts the kitchen sink on the back of his vehicle and goes up to The Cape, and he’s going to be away for three months, well, let me tell you, a 35mm bore shock just won’t cut it, not when it’s working 10 to 12 hours a day over corrugations.

“That’s why we went to the big 53mm bore and 45mm bore adjustable shock; the casing is 70mm, rather than a normal 55mm or 60mm for smaller bore shocks… there’s a lot more oil in there so it takes a lot longer to heat up, and there’s a far greater surface area so there’s a bigger area to cool down. If you can keep a shock absorber cooler, it will always perform longer.”

But not everyone is going to drive to Cape York fully laden. That’s why there’s choice in the Tough Dog range. “People driving around town don’t need a 53mm or a 45mm bore shock absorber, but the blokes who are doing those sort of trips, and prolonged trips, do,” John says. 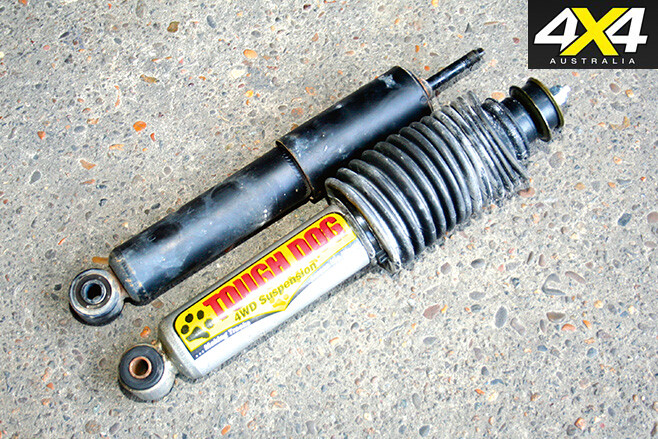 “Consequently, the products that we do [offer] are quite diverse and unique, and we are very aware that the more product that you have, the more sales you’ll make… because you give people more choice.”

With such a big range of product available for so many vehicles, you might think it’d be difficult to select the right suspension set-up for your vehicle, but John says nothing could be further from the truth.

“If you go to our website, we’ve got a suspension kit builder. You can put in exactly what accessories the vehicle has fitted, what load it’s carrying, and it’ll give you the correct part number…

“And, of course, we’re always just a phone call away. People will pick up the phone and say, ‘I’ve got a vehicle and I’m not quite sure what to put on it’, so then we’ve got the expertise behind all that information. We’re always happy to talk suspension with people. We want to make sure customers get the right gear for their needs every time. 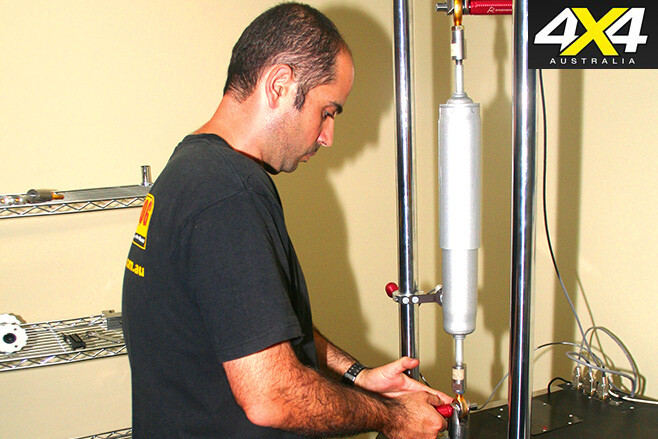 “We have a number of key people that are as passionate about the Tough Dog brand as I am. General Manager Simon Vella has been with me for 22 years. Avian Howard and Janelle Vella have been here for 12 years each. There are other key personnel that have all contributed to the brand’s success.

“In the last 12 to 18 months we’ve consciously gone out overseas and done quite a number of shows to try and grow our international business. We currently export to 28 countries and that number is growing.

Despite having been in the industry for almost 30 years, John has no plans to slow down. “I’m 64,” he admits. “I like coming to work. When you started something and you worked so hard to get to where it is today, it’s not about the money anymore…”

And he’s extremely proud of the company that he’s built: “What we’re finding is the level of awareness of our brand is really quite fantastic out there. We’re perceived as being a strong brand and a quality product.” Enough said.