EMERGENCY Services, Police, the Defence Force. The general population knows they are there when we need them, but too often these essential people in our lives blend into the background of why you see them.

Whether it is a motor vehicle accident, a violent situation, fighting bushfires, rescuing those in peril or being deployed to a conflict in a distant land, the true impact of being front and centre in these (and other) scenarios is only felt by those first attenders. 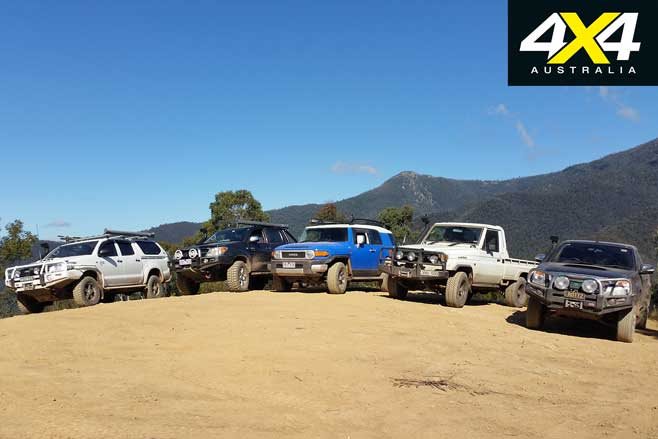 It’s incredibly hard to put yourself there mentally, to even try and understand the effect of seeing some of the worst things humanity can do to itself, and then trying to dismiss it – or at the least, bury it deep in the back of your memory.

Many understandably cannot, and the resultant post-traumatic stress disorder – and other stress and grief-related mental illnesses – can be incredibly difficult to deal with, for not only the one suffering but also their loved ones. It can take a unique approach to allow those affected to see beyond the grim reality of their jobs.

The Blue Green Crew (aka TBGC; the Blue acknowledges the police; Green the defence force, and Crew from the fact ambos work as a team) takes a unique approach, and it’s an absolute belter. It takes groups of Defence and Emergency Services personnel out of their intense environment for a weekend (or sometimes longer) of off-road touring and camping. It was an idea borne from TBGC founder Marcus Nash’s own battle with mental health issues.

“I came up with the idea after it was clear that I was struggling with mental health issues, and my way to reset or escape was to head away four-wheel driving and camping,” Marcus says. “I found that it had a profound effect on my mental health after taking away a couple of returned soldiers that had recently returned from Afghanistan who didn’t have 4x4s but loved getting away. It was, I guess, like a light bulb going on: I had an idea.”

This idea of Marcus’s soon grew into a more detailed plan as to how to convince attendees of the benefits of escaping the craziness of their professional lives for a few days, regularly. 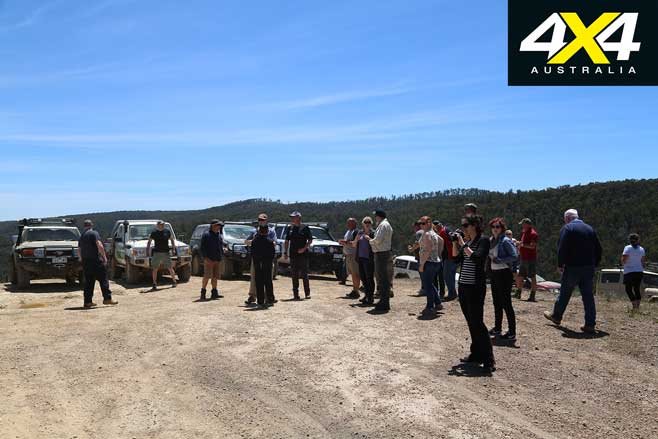 “As the vice president and one of the founding members of The Victoria Police 4WD Club, I realised most of us are going away on club trips by ourselves in the vehicles,” he recounts. “So why not fill those empty seats up with members of Emergency Services and Defence who are struggling with mental health issues (and) may not have the knowledge, equipment of confidence to go camping and four-wheel driving.

This would give them a safe environment in which to do so, and give them the opportunity to experience the fun that four-wheel driving and camping has to offer.”

The Blue Green Crew program has grown quickly since those early days – a sure sign this type of approach helps with mental health – and has benefited from plenty of support (and gear) from the various services (Vic Police, Vic Ambulance, the Army), as well as 4x4 industry icons Ironman 4x4 and ARB and adventure retailer Anaconda. 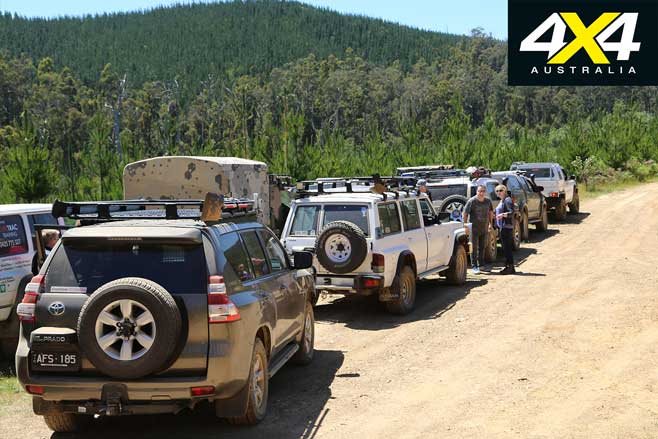 Icom and GME have also donated gear for members to use. Those early days also saw Marcus fulfil a lot of the roles needed to make weekends away a success, including becoming more than a dab hand at pre-cooking and prepping meals for the weekend.

“I would be up at 6am on a Friday. I’d head off shopping for everyone, and when I got home from the shops I’d start pre-cooking roast dinners and stacking them in foil containers for all the members and people filling the passenger seats,” he says. “The campsite would wake to the smell of bacon and eggs, as the army was fed for the morning; morning teas would be cakes, muffins and coffee; lunches were mostly salad rolls.”

The cooking and catering soon got too big for one person, but this also allowed Marcus to implement a more inclusive and fun solution: the team now purchases all the food needed when at the weekend’s meeting point, and then everyone pitches in to cook and cater over the weekend, bringing them together as a team and ensuring there are plenty of tall tales and laughs around the camp kitchen and during the meal. 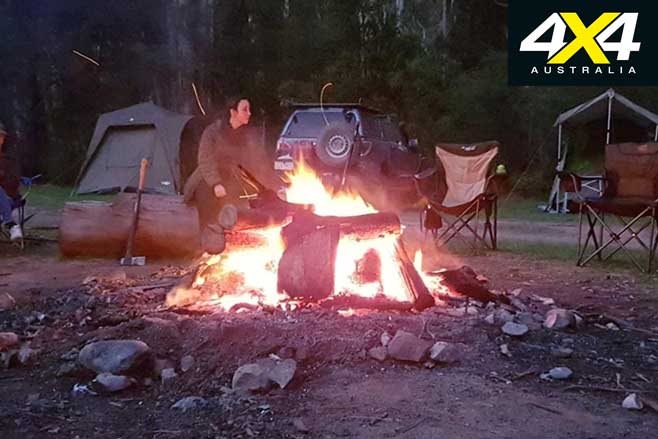 Trips are advertised early (about two months before the actual date) through a number of channels, according to Marcus, with Vic Police promoting them in its internal gazette, while the ambulance service sends its members emails and the defence crew posts it to its intranet.

The Blue Green Crew Facebook page is also a great central communications point. It is the communication side of this whole venture – and ensures the spirit of the Crew and its message gets through clearly – which is crucial to drawing out those who may be interested but need a bit of assurance before committing.

“Most attendees will email me first,” Marcus says. “You get one opportunity to instil total confidence in those people, as they are unlikely to reach out a second time if they felt in any way that it may not be a safe environment for them to be in. Normally, they will leave a phone number and I will call them to chat with them to put them at ease.” 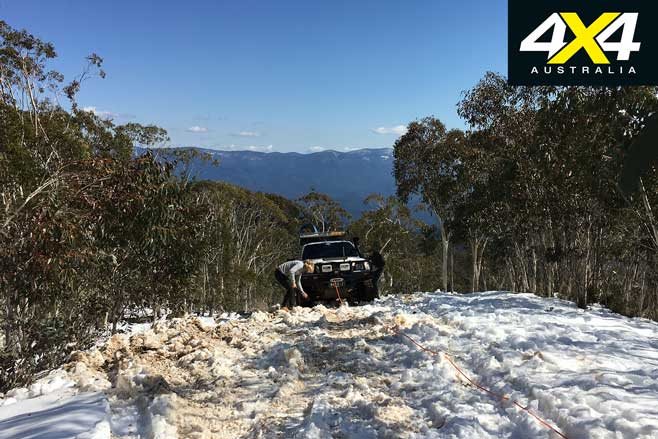 It’s all about getting them there, Marcus reckons, and once they see how much fun and how relaxing, both physically and mentally, the trips are, they will usually return; as confirmed by John, a long-term member of TBGC.

“I have been a police officer with Victoria Police for almost 20 years,” John says. “I have been involved in two critical incidents (shootings) that have resulted in PTSD. I first heard about The Blue Green Crew through our Intranet Bulletin Board. I was then taken on a camping/4x4 trip as a passenger. This was my first real experience camping and 4x4 driving.

“I met some great people that had been through similar experiences and I realised that my thoughts and feelings were normal. This, along with the amazing scenery and views of the Victorian High Country, really helped me see things a little brighter. I had such a great time that I came back from that trip and bought my own 4x4. I have been on almost every trip since then and have developed some lifelong friendships that have helped me through some dark times.” 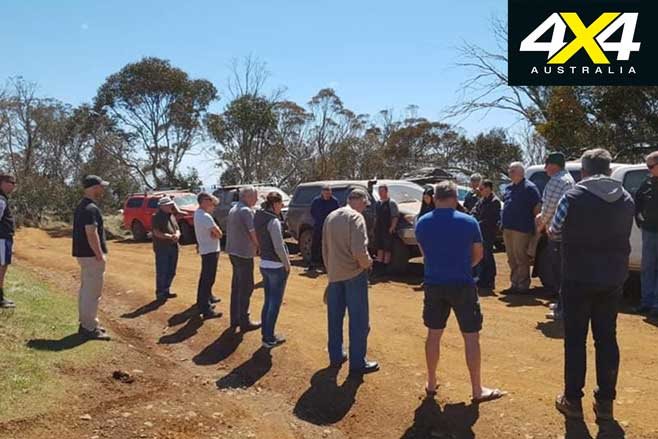 Yep, TBGC is one of the great feel-good stories, and it’s hard not to go overboard in terms of offering kudos to Marcus for thinking up the original concept and then offering more for just how big and impressive it has become in terms of reaching its goals. Of course, it’s not the only solution to this terrible problem, but it’s definitely one of the most unique – after all, it’s hard to think of anywhere that’d be more conducive to bringing a smile to someone’s face than a night around a campfire in the High Country.