New Roothy rattles the Grand Cherokee through some old mining country in Cloncurry.

SO, THE brand new Jeep Grand Cherokee had a couple of thousand kilometres on the clock before I got to drive it. After a couple of long days, we’d turned off the highway to check out some old mining country behind Cloncurry, Queensland.

The track I’d picked hadn’t been driven in a few years and took a bit of finding and, as it hadn’t rained much in outback Queensland for the last five years, things were looking pretty rough. There were plenty of rocks, a few undulating channels that used to be creeks, and a whole bunch of scrub over the sides of the track.

“Hey John,” said Rod, our stills camera shooter. “Could you take the Jeep up that hill? I know I could do it but that little lecture you gave us about scratching the paint and...”

Yeah, I get it. If anyone’s going to stuff the new Jeep it’d better be the mug who borrowed it. 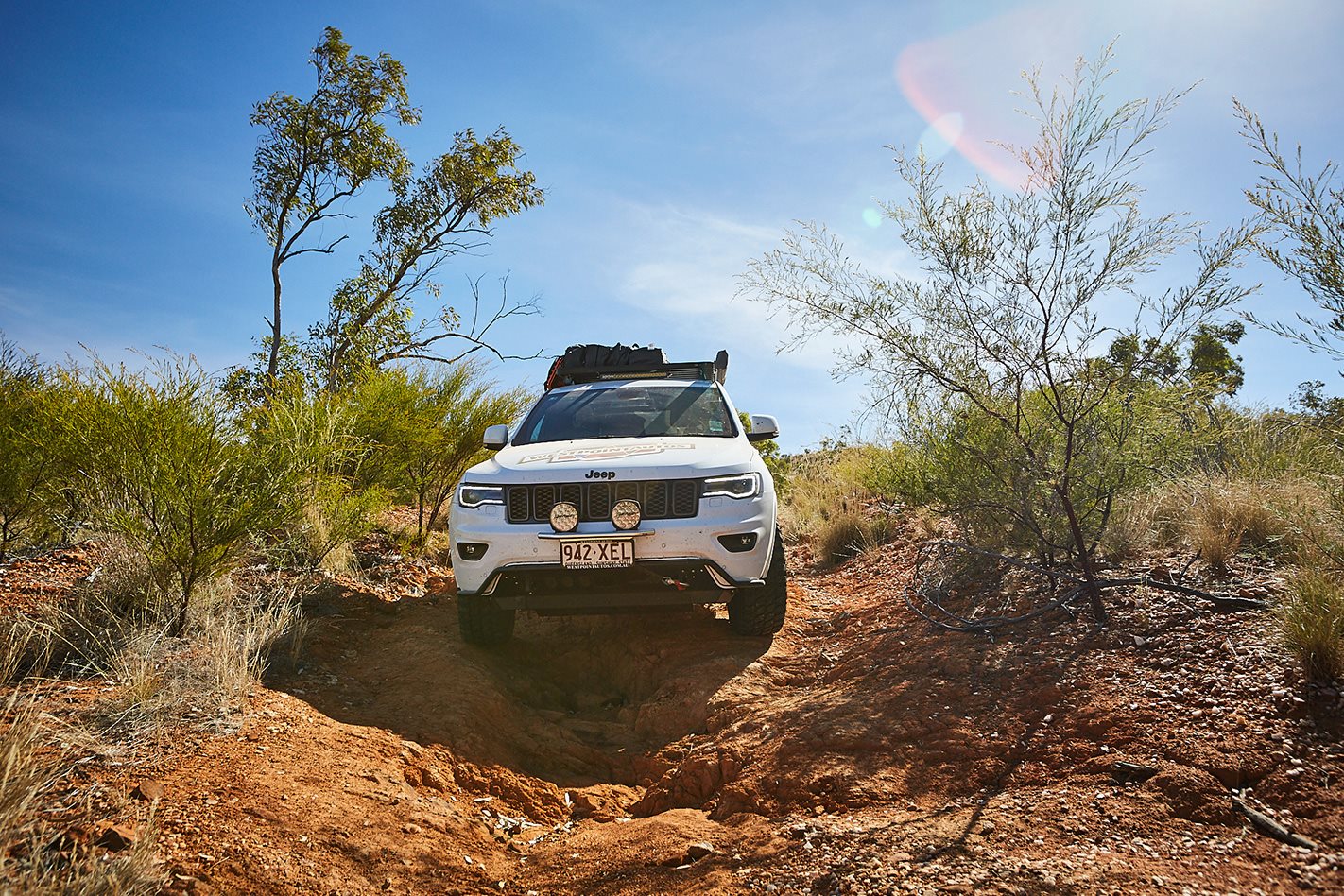 I hopped in and fiddled with the seat adjustment – there are a couple of buttons that shift the seat to suit almost any build, from Gimli the Dwarf to the Elephant Man. I went for the Santa selection.

“You can put the window up. The air’s on,” said Rod, no doubt feeling the dry outback heat after the Jeep’s comfy climate control. I switched the air off and buttoned down the windows just to be difficult. Yes, there is a layer of red dust through everything.

Hopping out of Milo isn’t good for comparisons. Fact is, Milo has the comfort of a Bobcat and the style of a rubber mallet, while the Cherokee felt leather-lush and beautiful. Right then, I figured I had better not let my wife Karen anywhere near it.

Like all Jeeps, the suspension instantly felt super soft and supple, with a ride over the rocks that’s best described as ‘floating boat-like’, while the steering, which I’d put in Sport mode, felt very precise. None of that’d matter, though, if this boat ran aground on the sharp, old rocks poking up out of the track. I put my faith in the unproven Desert Hawk muddies, selected low range with a push of the button and Rock mode with a twist of the fat dial, and then aimed for all of the high spots. 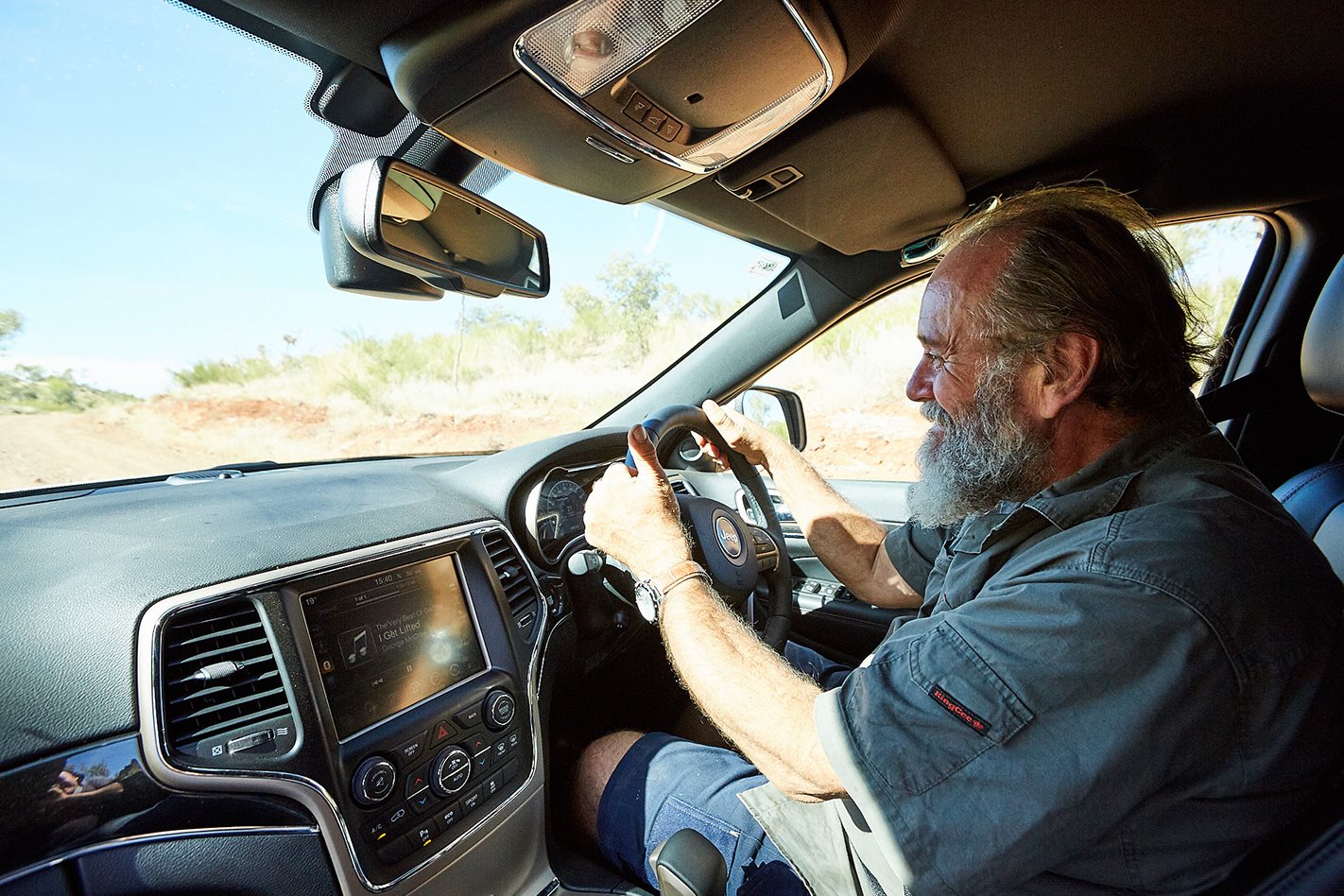 Wow! Sure, it took some judicious wheel placement to keep the low-slung body off the rocks, but wherever I pointed it, the Jeep responded by doing well. Then things got steeper and it started spitting out stones, and a couple of times it stopped altogether on the real steep stuff and nothing but a shove on the throttle would get it moving again.

So I tried mucking around with the modes. Now, I’ll leave it to the experts like Editor Matt and my old mate Fraser to explain why this is so – apart from the obvious reason that Roothy’s a klutz – but for some reason I found that when in Sand mode with occasional light pressure on the brake I could get it to clamber over almost anything. I know there’s an electronic diff lock up the rear and traction control all around, but somehow all four wheels found traction and the Cherokee became unstoppable. Only the fear of doing some body damage kept me from trying some really silly things.

Decades or more ago I went to Jeep releases in the US of A, and they always involved driving the Rubicon Trail, a tight, twisty and rocky 22-mile-long prospecting track that can take a couple of days. Big vehicles really struggle with it, but every Jeep ever made is expected – albeit with a bit of protection on the sills – to do it well in stock form. If you know that and you’ve seen the trail, it’s pretty easy to see why Jeeps, even Grand Cherokees, stay close to their heritage. Compact and light, reasonable approach and departure angles, and soft suspension make for a great formula for any off-roader – even one with all the leather bells and whistles. 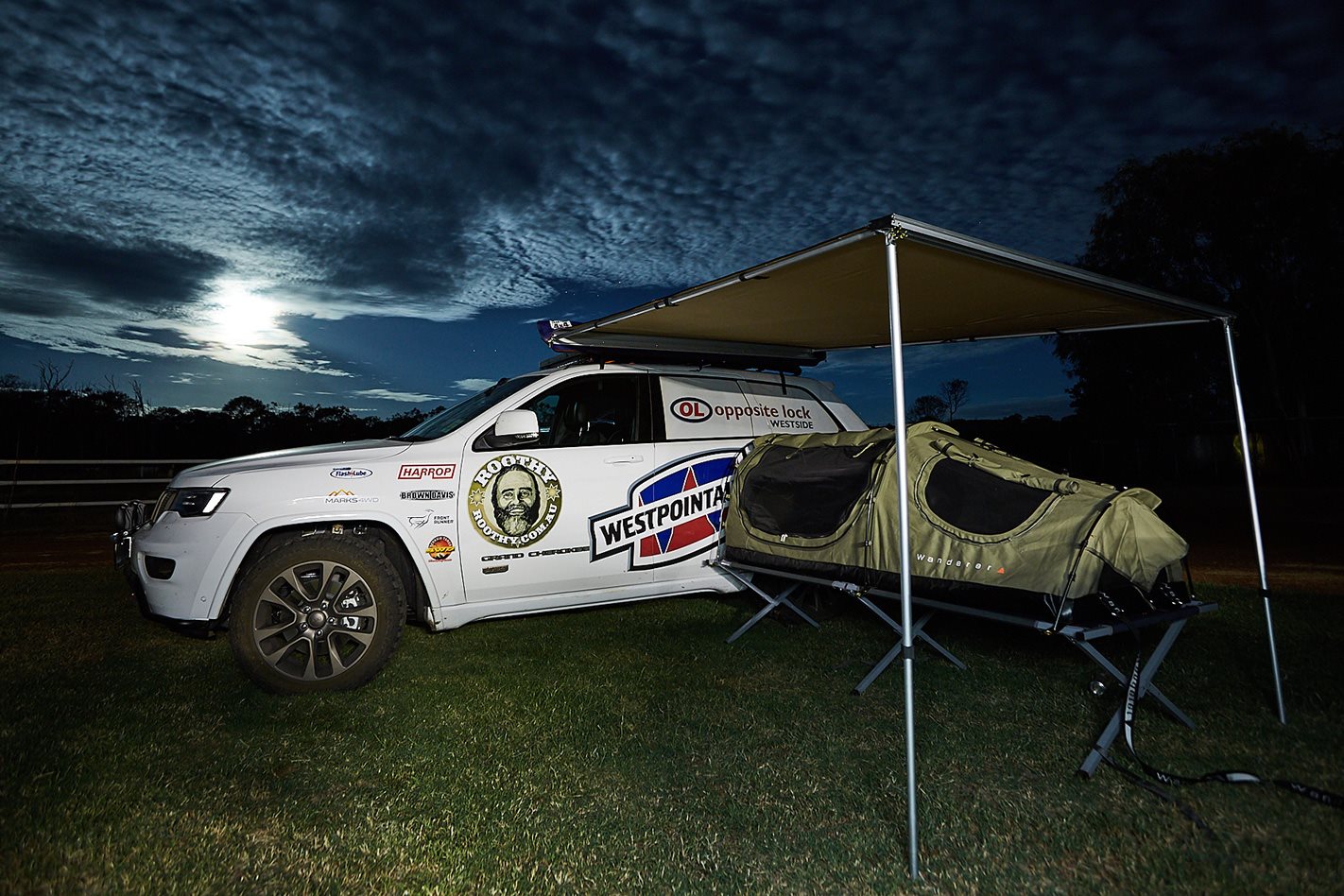 After four days of swapping in and out of the Jeep every time things got hectic, the overwhelming feeling was how tight the whole package was. No rattles, no bangs, no vibrations – just pure power when you needed it and plenty of brakes. I did a few high range dirt tracks at speed for photos and found it as predictable as it was surefooted. The Grand Cherokee can be made to slide through a corner, but it’s like skipping out in a rally car as both ends shift together with minimal input at the wheel.

Maybe I’d better mention the engine again. The V6 turbo-diesel makes 180kW and 570Nm. For those of us brought up loving big V8s, that’s more torque and a tad less power than the GTS 350 Monaros that won Bathurst during the 1960s. Yet you wouldn’t even know the bloody thing was running if you stood behind it at idle. More muscle than a muscle car, but it’s backed by an eight speed automatic that selects the perfect ratio for every situation thanks to having a computerised brain under the seat

Meanwhile, Milo and my mate’s modified 60 Series, both tough, old live-axle trucks with leaf suspension, were tackling the same tracks without the caution. That’s a ride height and price thing – the Cherokee is lower and its price higher. This Grand Cherokee whistled all the way to Darwin and back without missing a superbly comfortable beat. The only tracks we didn’t inflict on it were the ones near Adelaide River that, with rain still falling at the end of the Wet, were too deep in mud and water to chuck in any vehicle without a snorkel. 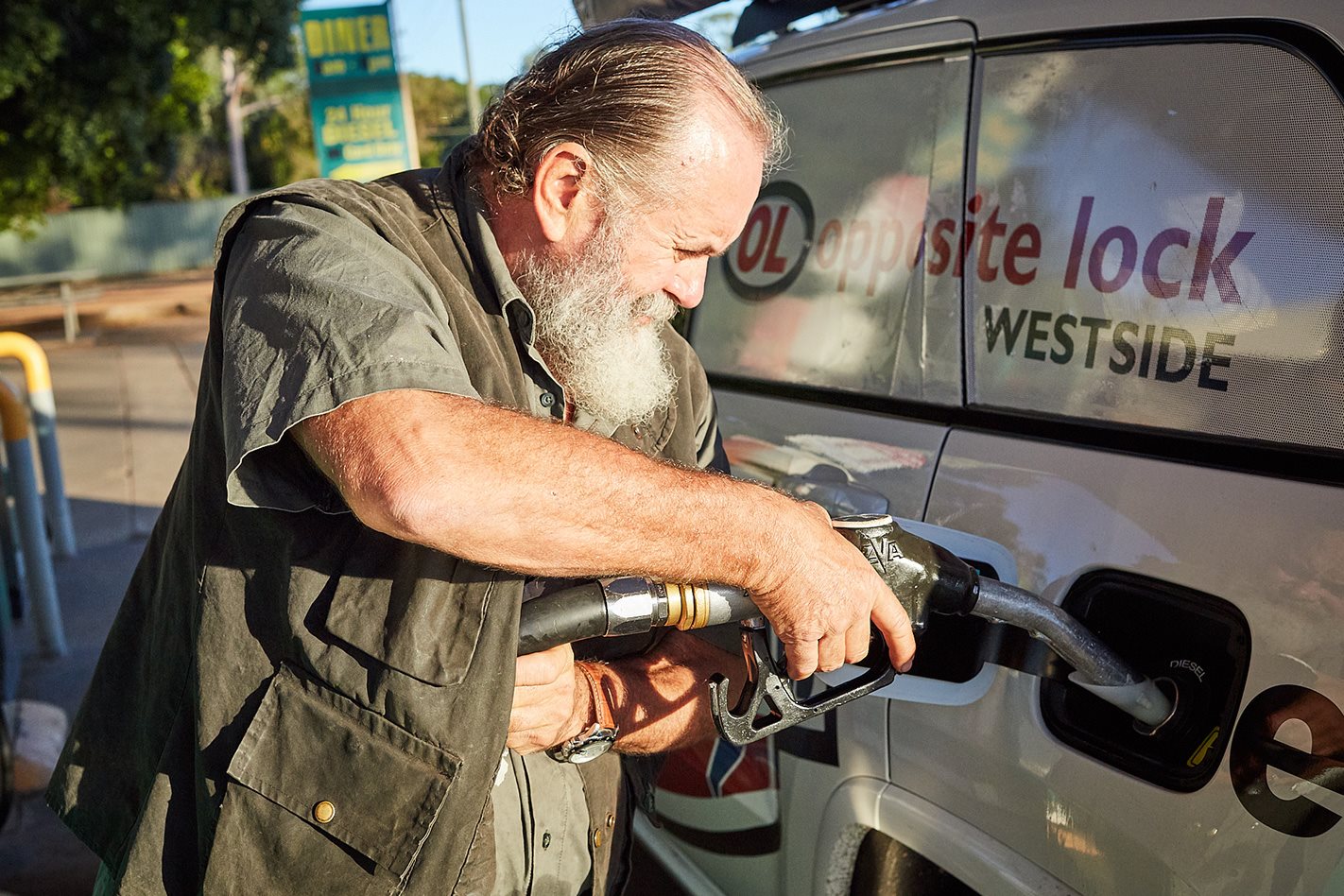 This was a real-world test, with real-world drivers like our camera crew who are just there to do the job with plenty of real-world off-roading thrown in. Thewhole idea was to prove the ‘There and Back Guarantee’ that Jeep has been pushing. Three weeks later we were back in Brisbane, having done a tad less than 8000km of mixed highway hauling plus another 2000 or so kays of back-track touring. Fully loaded inside and out, it still averaged 10.9km/100L – try getting 28mpg out of that old Monaro!

Despite some sharp rock country and plenty of corrugations, the Desert Hawk tyres didn’t lose a pound of pressure. I know that, because there’s a read-out of individual tyre pressures on the dash. Despite some wheel-in-the-air situations and plenty of steep rocky dips, we didn’t need the VRS winch, which speaks volumes for the traction control, the Desert Hawks and the suspension all working together. The MaxTrax didn’t come off the rack, either, at least not until we borrowed them for our Adelaide River run.

Most of all, we didn’t need to phone the dealer. When I did, it was to ask Luke if we could keep his Cherokee for another couple of weeks because we were enjoying it too much to give it back. Off-roader, highway cruiser, around-town vehicle – the Grand Cherokee was brilliant everywhere.

You know what? I’m thinking the only people who knock Jeeps do so because they haven’t tried them.

Righto, from the sublime to the ridiculous – next month we’ll be back in the shed working on Milo 2.