Roothy lands a surprise companion for a desert-crossing road trip.

YES, I know, this column should be following on with more of the Milo 2 build, but things came to a standstill last month because it was time to go seriously outback again.

With a four-wheel-driving mate getting married up in Darwin, and a whole lot of pent-up demand for more Milo DVDs, I figured we could combine the two and make a cross-country trip through the bush. That meant a big filming trip, so I was looking around for a camera car. I’d put the word out, but the first reply I got was a bit of a surprise.

“You want me to take a brand new Jeep Grand Cherokee?” 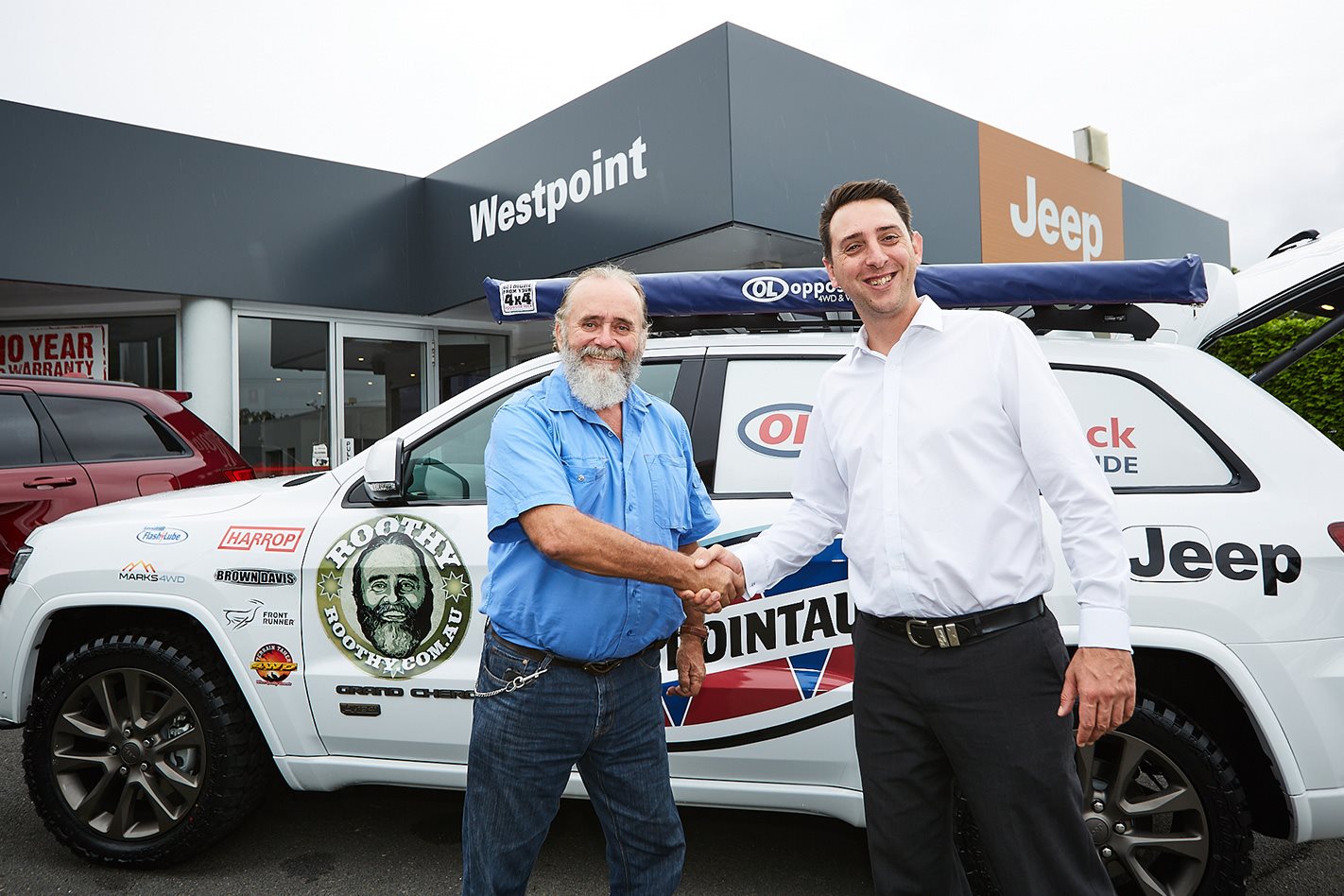 Phew, Luke Hawkin’s call sort of took my breath away. Camera cars are usually rough, old stodgers; GU Patrols or 100 Series Cruisers, with whatever motor makes the least amount of power so there’s less chance of them self-destructing. The best bet has usually been to buy them cheap, equip them up with gear, and expect them to last a few trips at best.

Camera crews can be hard on machinery. Their first priority is always ‘the shot’, which means they’re likely to barge through mud or climb trees to get into position. Most of the blokes – and ladies – I’ve worked with over the years are good bush drivers because they’ve had to be, but looking after the vehicle is usually way down a long list that has clean lenses and charged batteries up top.

Video: WWII Jeep - The Greatest 4X4 of all

However, Jeep has had an image problem in recent years – too many people whingeing on social media, mostly. For a while, Jeeps were selling like crazy thanks to a combination of great advertising, great pricing and a bloody good product, but somewhere up the line a few years ago things got a bit too self-confident and suddenly customers and warranty issues weren’t always coming first. Sometimes success breeds complacency.

There’d been some major changes at distributor level to correct the complacency issues including a new ‘there and back’ guarantee aimed directly at the knockers, but things also needed a shake-up on the sales floor. 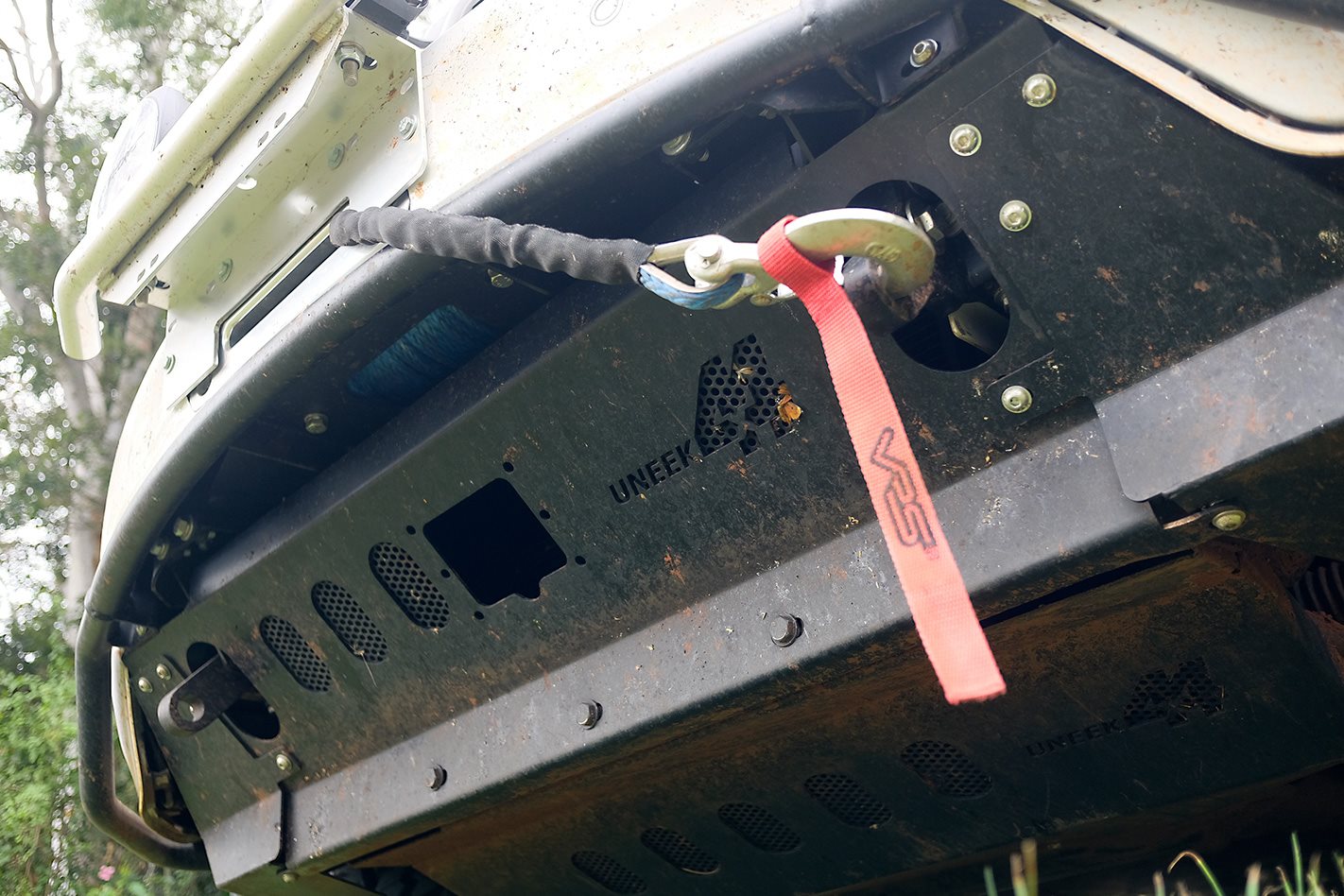 Luke Hawkin’s Westpoint network of dealerships, which includes a Jeep franchise, decided to do some ‘proving’ of their own. They’d let Roothy loose with a Cherokee. Maybe it’d come back...

So what do you do when you give a brand new vehicle worth nearly $70K over to a camera crew who are filming in rough and remote outback country? You dress it up with some good aftermarket gear, of course. But we only had a week to do it, and the new Cherokee hasn’t been around long enough for there to be a whole world of choice in aftermarket clobber. Fortunately, part of the Westpoint network is Westside Opposite Lock run by my mate Aaron Marshall. I’d get expert advice and fitting right from the start.

What to go for, though? A suspension lift would have been great, but the 2017 Cherokee had enough subtle differences for nothing to be engineered yet. I’d driven the Jeep in stock form and was pretty impressed by the standard suspension; super soft and about as long travel as you’d expect from a stocker, which is pretty much what you expect from Jeep. Decent tyres are essential for any vehicle intending to take on outback tracks, and the large alloy rim size narrowed our choices, but Aaron found the Achilles Desert Hawks and they certainly looked the part. 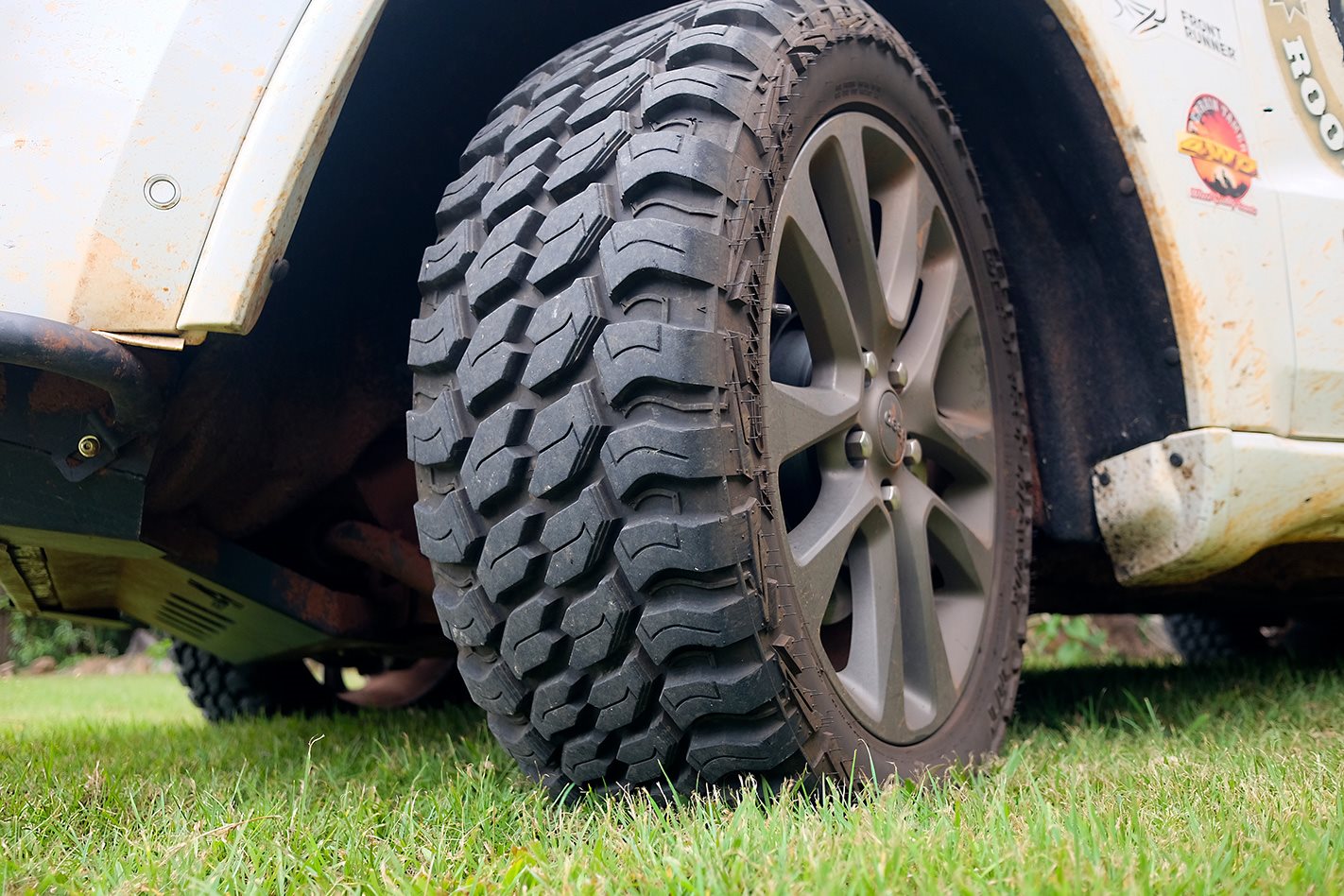 The last thing you want is a camera team blowing out a tyre while chasing the convoy. With the rubber sorted it was time to look for some frontal protection with winch potential, too. Because camera crews often lag behind as they pack their gear, they need to be fully capable of a self-recovery, too. In my mind, that means two things are essential: a good winch and a set of MaxTrax.

Aaron sourced a steel front panel from Uneek 4x4 and then, after asking me what sort of winch I’d prefer, got his team to fit a VRS 9500lb job with rope. A bit of bash-plate-style protection up front on modern vehicles is almost mandatory if you’re serious about going bush. When anything from a kangaroo to a rock can see a vehicle sitting on the side of the road on a cloud of steam, I’d rate frontal protection as not only mandatory but cheap insurance.

With the battery packs and camera gear taking up most of the Jeep’s internal room, a roof rack was mandatory. It had to be strong enough to take a cameraman or two for those lovely ‘high set’ shots, while still not looking out of place on the stylish Cherokee. The best racks in the business are Front Runner – they’re light, strong and, with flat slats, can be easily walked on. They also come with virtually any accessory mounts you can think of, including MaxTrax mounts. I’ve had plenty of trips where the MaxTrax never left the roof, but when they have they’ve recovered the vehicle and often saved it. MaxTrax are the cheapest insurance any off-roader can have. 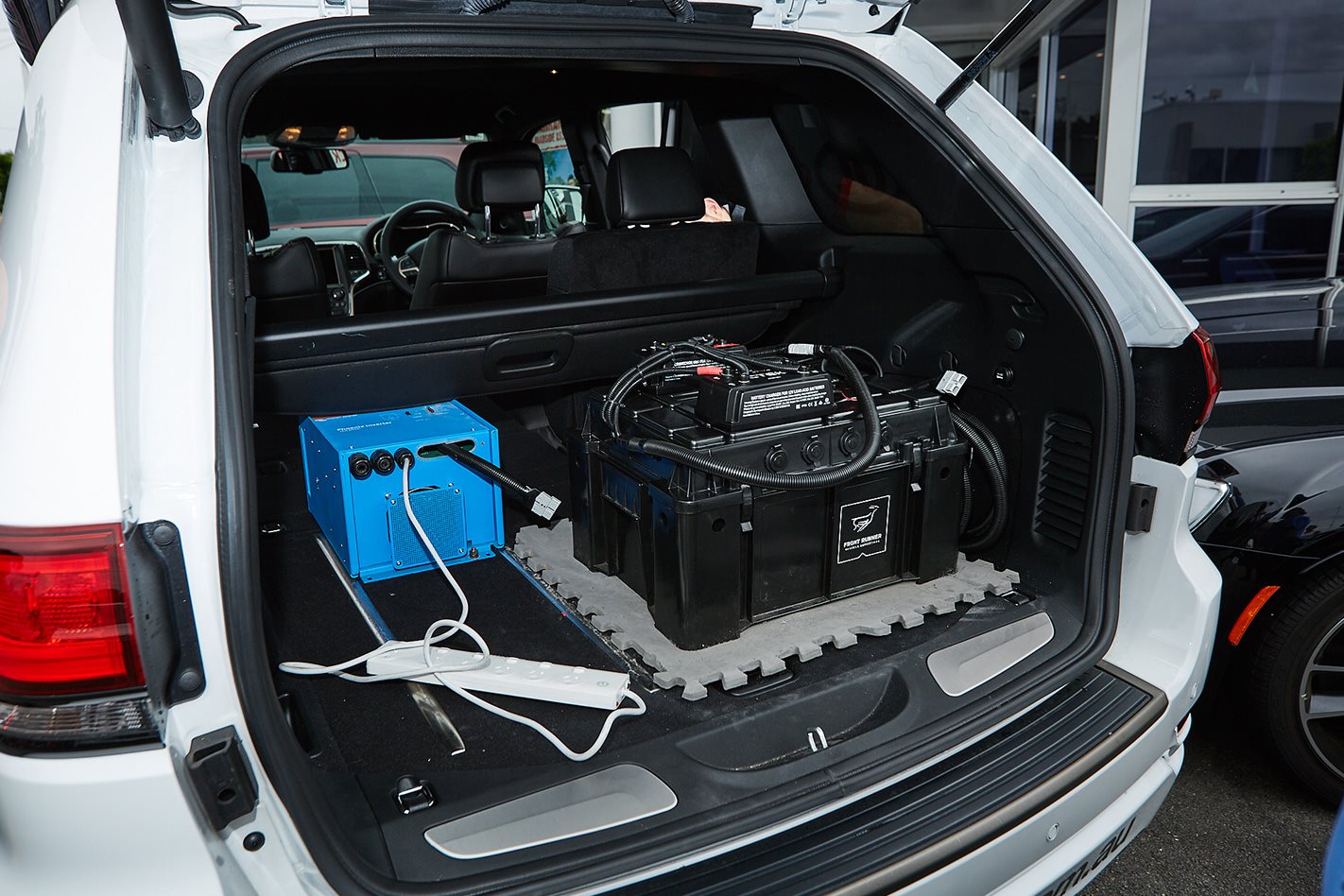 Front Runner is a South African-based company, but it’s telling that it makes a bracket for its racks specifically for MaxTrax because the orange boards are a favourite over there, too. I guess you don’t want to be mucking around with cheap, cracking plastic when there’s a pride of lions waking up under those trees. Because the lads wouldn’t have time for mucking around, I got Aaron to fit an awning, too. You need reliability and strength when an awning’s being used for work, not play.

Finally, we got the swags and bunks strapped to the roof and the back seats folded down to take all those Pelican cases full of gear, and it was time to hit the back tracks to Darwin. At this stage I’d put exactly zero kilometres behind the wheel of the new Jeep, but I was hankering to see how she’d go off-road. I had a whole bunch of people wondering if it’d make it home, too.

There hadn’t been a lot of time for preparation and, with about 10,000km ahead of that cute, little nose, the big questions were still on the table. I guess that means next month we’ll be looking at how the Jeep faired. You might be surprised.

Meanwhile, I’m home again, so I’d better go see if I can source some engine mounts for Milo 2. Talk about one end of the technology spectrum to the other. 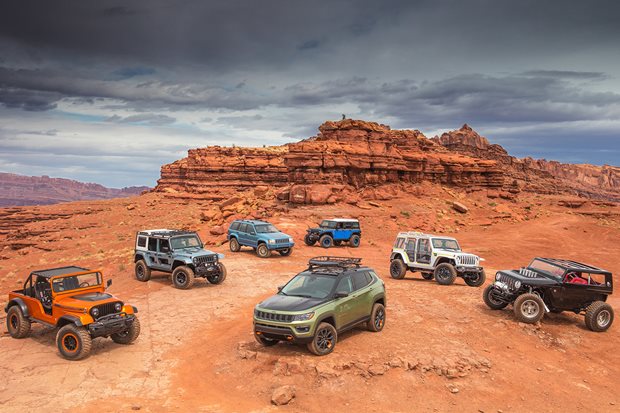 Jeep rolls out its new crop of one-off creations at the 2017 Easter Jeep Safari. 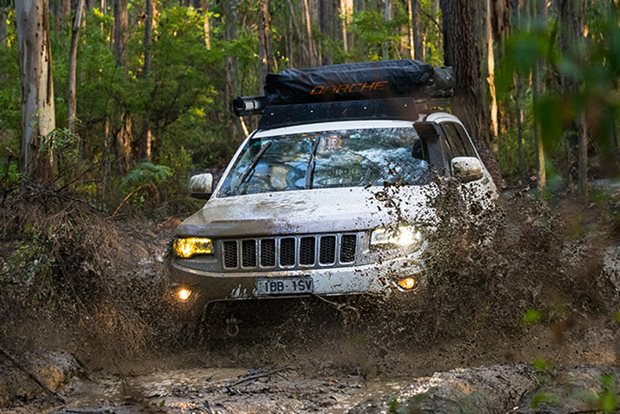 Paul Nagel is the kind of bloke who picks the right tool for the job. Is his 2014 Jeep Grand Cherokee up for the big Aussie lap? 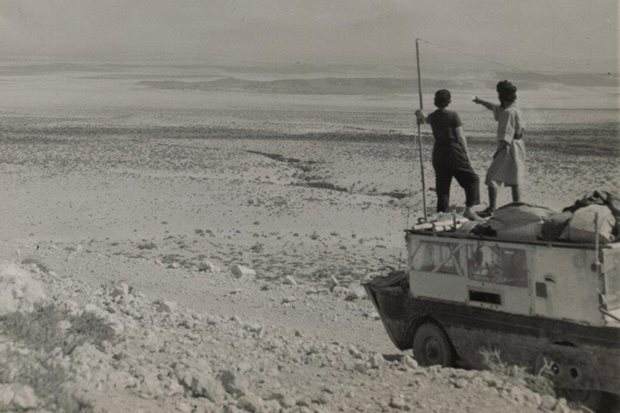 Australian Ben Carlin’s trip around the world in an amphibious jeep seems ridiculous. But Ron Moon’s here to tell you it’s all true! 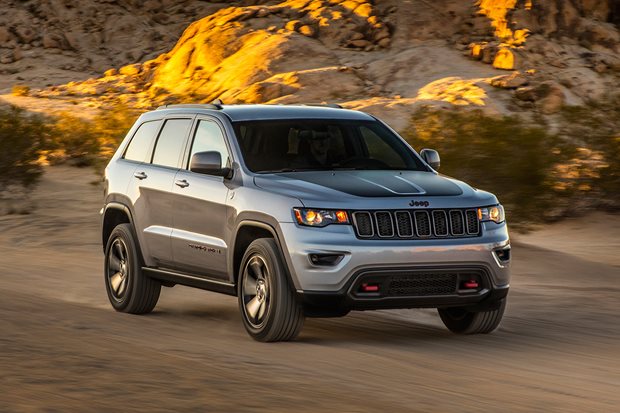 The Jeep Grand Cherokee Trailhawk will hit local showrooms next year, but what happens when you bolt a slew of off-road gear onto Jeep’s popular large SUV? Do the gains in...