SOME days are bathed in a kind of golden light of shiny wonderfulness, and that glow will tinge your memories forever more, even if the actual day in question was swathed in fog and occasionally bastardised by traffic jams and terrifying tractors.

Any day in which you stroll into the fabled Ferrari factory in Maranello and are handed the lurid red key to a Ferrari 488 Spider is going to be a great one, and I tried hard to imagine just how excellent it would be as the date drew closer, but this was, truly, one of those days when you feel more alive, more blessed, and in need of a solid self-pinching.

After being ushered through shiny halls filled with chromed engine blocks and busts of Michael Schumacher, I was given a brusque briefing on the savagely sexy Spider - which was even painted Blu Corsa, genuinely my favourite colour - by a female executive type with an accent from Downton Abbey and all the warmth of the Thames in winter.

She advised me that, unlike the 488 coupe - bought by crazed fanatics who want to titillate themselves alone each Sunday morning - the Spider will be owned by people who mainly drive with a loved one who will sit, staring wild-eyed at their own relationship-threatening Passenger Screen, which not only advises them of your current gear, revs and pace, but what your top speed for the day has been.

Presuming a passenger was the done thing, I’d brought my old man, now pushing 70 and currently visiting me in Italy with exquisite timing, which made the whole day even more momentous. He managed to fill our conference room with a series of disbelieving snorts during the presentation, as Ms Cutglass Vowels explained that 60 per cent of all 488 Spiders would be bought by repeat Ferrari customers, and that 90 per cent of those only ever buy the convertible.

And that the top speed of our car would only be 325km/h, as opposed to 330-plus for the hard-top, which weighs just 50kg less (Ferrari claims most, non-Italian-designed roofs would weigh at least 40kg more, and that its retractable hard top is lighter than a soft-top would be, and it can now be raised at up to 45km/h).

The weight penalty might not sound like much - indeed it’s so little that Ferrari didn’t need to change the dampers or springs, partly because their software helps them adapt instantly anyway - but it crunches the Spider’s zero to 200km/h time to 8.7 seconds, a pitiful 0.4 seconds slower than the coupe.

In fairness it’s worth point out that the staggering Ferrari 458 did the same 200km/h dash in 10.4 seconds, and that the Spider matches its lighter sister with a 3.0 second time in the 0 to 100km/h sprint.

My co-driver’s derisory snorts were turning into slightly worried gasps as these figures assailed him, but they were as nothing to the volcanic exhalations, interspersed with panicked breath-holding, he’d be displaying within the hour.

First we had to stand in the car park and make low whistles and polite groans as we bathed in the blue brilliance of the 488’s beauty. The Spider might lose the glass engine cover, but it replaces it with a sleek rear deck that loses nothing in the downforce stakes, apparently. You also gain some storage space behind the seats, which you’ll need for your passenger, and their sick bag collection. Our next mission was deciding where to go with our allotted six hours (other car companies lend you their vehicles for a week, Lamborghini will give you for a couple of nights, only Ferrari has a leash this short), but I had come prepared, with a sheet of card I’d ripped from a drive program for the 488 GTB launch in Maranello.

What I’d not realised, perhaps because I can’t read, was that the twisting, titanic and scenic road I remembered - the Passo della Futa - turns out to be less than 30km from my house in Bologna, which meant I’d have time to pop in home afterwards to spin my mother, wife, two kids and half a dozen neighbours around the block. Could this day get any better?

Obviously, yes, because driving the Spider, and better yet watching the bloke who helped teach you to drive perform paroxysms of joy and shock in the passenger seat, is such a startling experience.

Because it’s Italy, I was actually overtaken on what I seem to mistakenly believe are the speed-camera (distance-over-time) controlled freeways, by a hearse in one case, but once we reached the bottom of our mountain climb I was able to gently squeeze the throttle beyond halfway, at last.

What happened next is hard to describe in words, but I can somehow recall the shouting within my own cranium:  “Wow! Wow! Wowwowow. OW! Oh shit. I’m going to die, and kill my father. And worse than that I’m going to destroy this beautiful Ferrari! WOW! Brakes! Yes! Ohhh. That was close.”

The idea of a car that can hit 200km/h in under nine seconds, and a turbocharged 3.9-litre V8 engine that makes 492kW, and 760Nm, and has the same throttle-response times as a California (“lag” is not just a dirty word, it’s non-existent) is one thing; the reality is like an iron fist to the sternum. 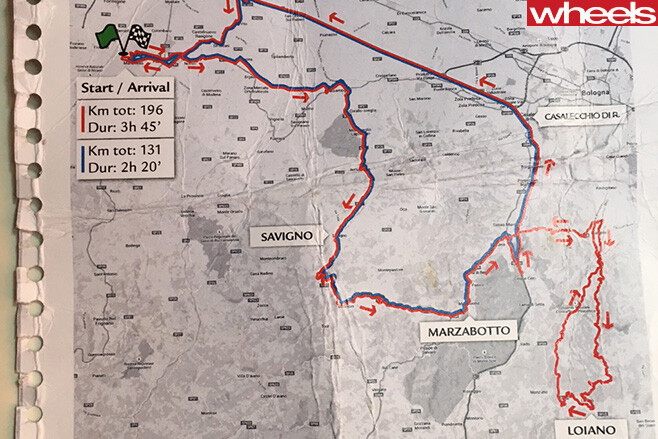 Even with a cautious, don't kill the bloke who’s still earning your inheritance approach, I smacked into my first hairpin bend a full second faster than my brain had believed was possible and was forced to brake like a man stamping on a wasp.

I would say the Spider stood on its nose, but in fact there was virtually no pitch at all, and so stupendous are its multitude of electronic stability, steering, F1 diff and torque-shifting programs that the Ferrari merely shrugged off my stupidity and slashed its way through the U-bend of a corner without the slightest sight of understeer.

Nor, when I planted the foot again in sheer joy, was there a sniff of wagging oversteer. All you get from the 488 is complete, freakish control, and a traction control light that flickers like a broken turn indicator, constantly reminding you that it’s more science than skill that’s keeping you on the road.

In yet another freak turn of events, the weather hit a balmy 19 degrees, and after enjoying the Wagnerian blast of sound through the small rear window, which can be dropped for purely orchestral reasons, we could actually lower the roof.

This deft dance of double panels takes just 14 seconds and somehow manages to make the Spider’s shape look even more desirable. More engine howl finds its way into the cabin as well, which is great, but only served to remind me of the top-end theatrics the 458 used to have, and how we’ll never hear their like again, thanks to turbocharging.

The trade-off is more than worth it, as the kind of ice-hockey-puck-me acceleration that’s always on hand in this car, even off zero throttle out of a slow bend, is simply unmatched, in my experience.

Nothing, but nothing, is as furiously fast, yet as excitingly within your control, as this car.

In handling terms, as we climbed a seemingly implausible number of bends up and over the 903m-high pass, the Spider seems to lose nothing at all to the original GTB, and it’s easy to see why, on a clearing sunny day that opens up vistas of pastoral green and burnt orange autumnal vineyards, people opt for the Spider.

By day’s end, the entire Corby family was blissed out and this one in particular was even more in love with Italy than ever.

I may as well come home now, though, because it surely can’t get any better. Unless I win the Italian lottery and buy that damn car.