The hot-hatch class gets even hotter with the tough-looking, multi-talented Renaultsport Megane RS280. And you can buy it in orange.

The hot-hatch class gets even hotter with the tough-looking, multi-talented Renaultsport Megane RS280. And you can buy it in orange.

Renaultsport’s third-generation hot Megane, based on the lukewarm but promising Megane IV GT, meaning four-wheel steering, a turbocharged four-pot and a dual-clutch ’box. Except that in this instance, Renaultsport hasn’t forgotten that purists love a manual transmission and pumped guards, and a bespoke suspension set-up that truly transforms this car. 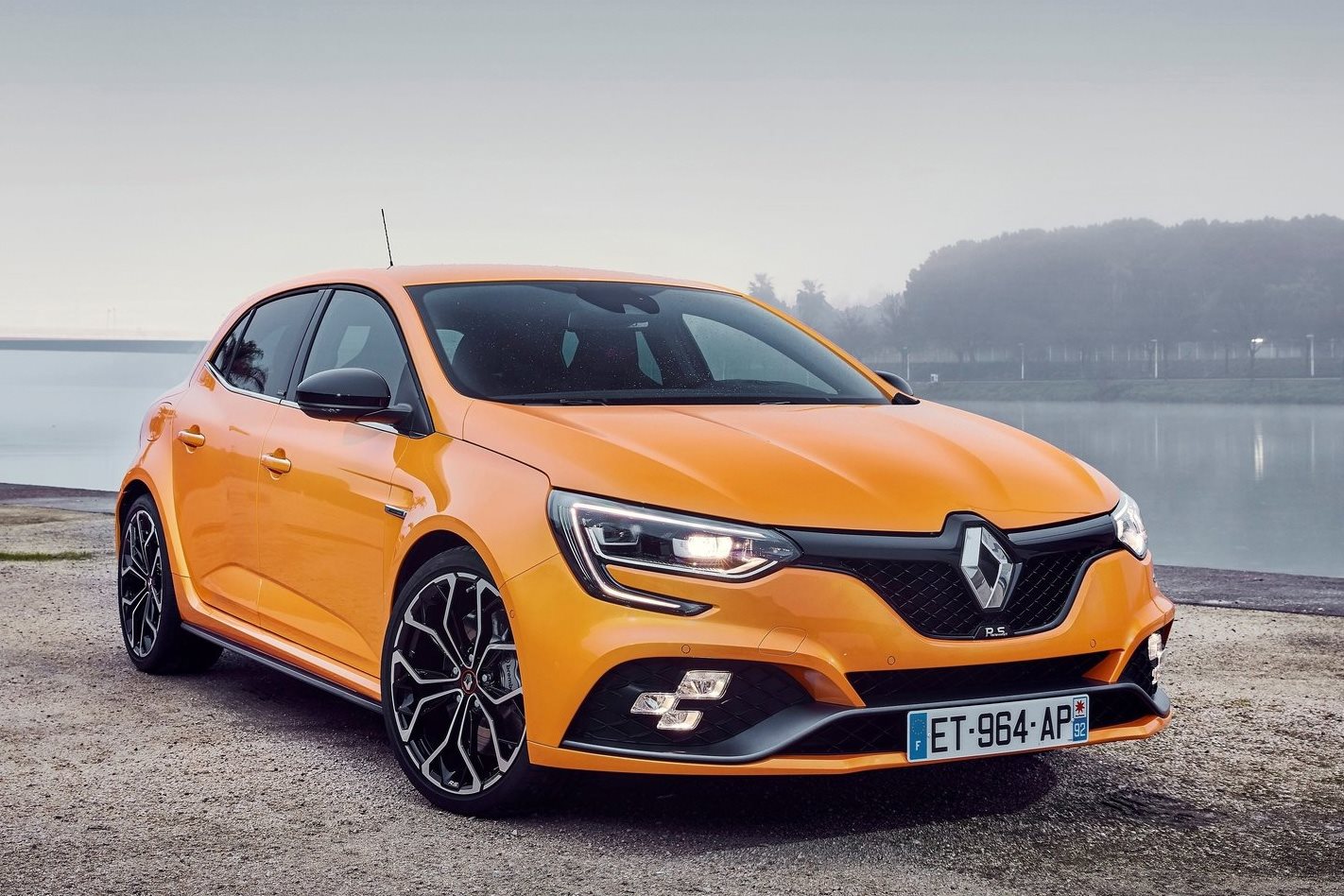 In the surprisingly cold climate of southern Spain in winter, we tested a ‘standard’ Megane RS280 with Sport chassis tune and auto ’box before moving into the red-blooded Cup version on the Jerez circuit, complete with a mechanical torsen LSD, a six-speed manual ’box, and even more-focused suspension.

Giving the hottest Megane greater appeal to the masses, while not ignoring the fan-boy demands of manual-loving purists leaves this five-door-only hot hatch in revered territory. Its brilliant suspension control, the intriguing charms of four-wheel steering and the fruity grunt from its new 1.8-litre turbo donk more than make up for any design flaws inherited from the regular Megane. Not to mention the fact that it looks deeply sensual. Especially in orange. 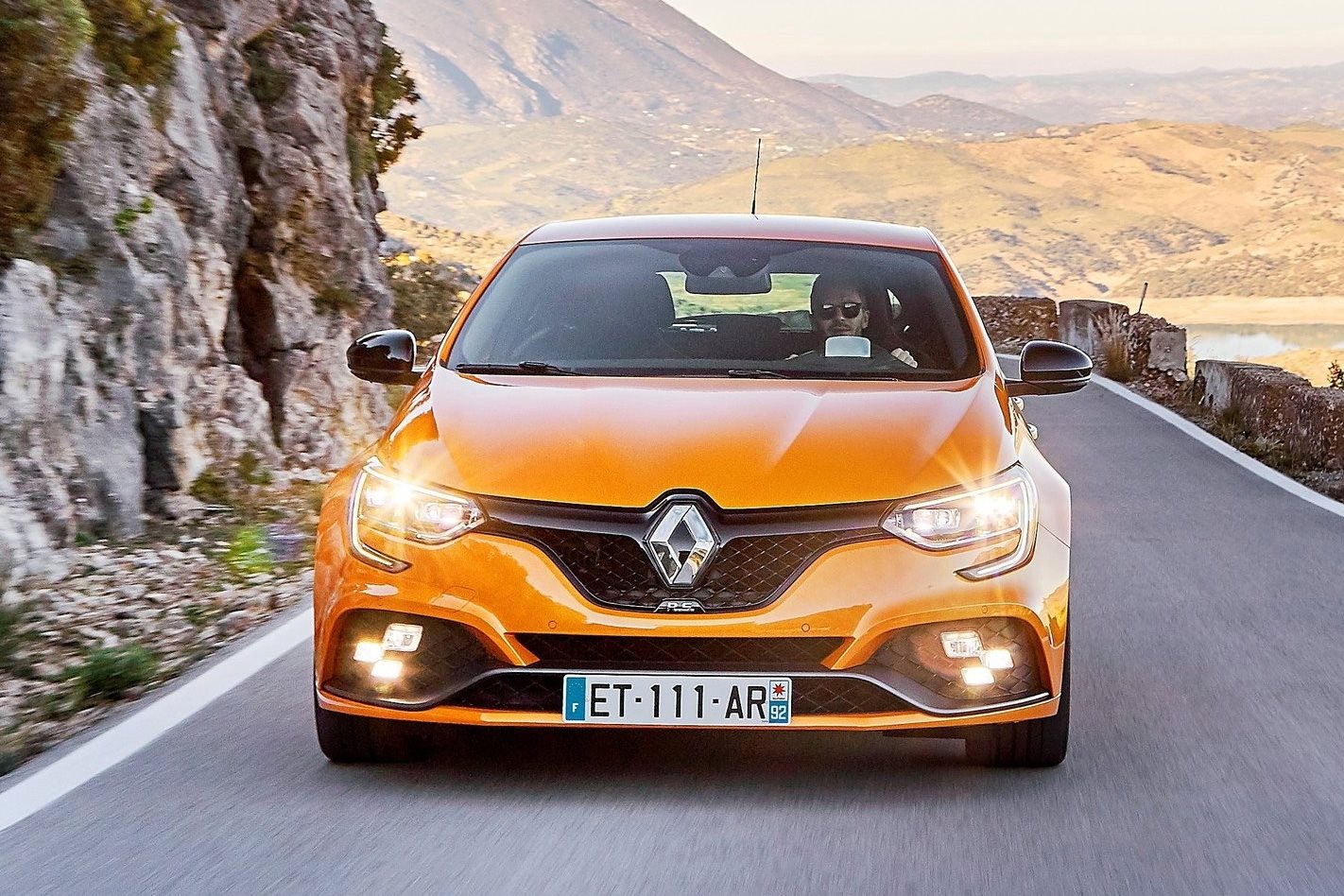 IF WE needed any further proof that we’re living in the golden age of the hot-hatch, then this glorious pearlescent-orange Renault is it. Pumped to within an inch of appearing gratuitous, and preened so beautifully in just about every area, the new Renaultsport Megane RS280 has ‘want’, ‘need’ and ‘must have’ written all over it.

Much like its heavily re-engineered predecessor, this is no shoehorning engine experiment, and nor is it merely a simple exercise in modernising the cracking hot-hatch that fans have salivated over for nearly a decade. This is fresh thinking for Renaultsport, despite the fact we’ve seen a five-door hot Megane before.

The French performance outfit had considered continuing with a three-door format but felt the development budget was better spent turning the rather unspectacular, if worthy (in GT form) Megane IV into a hatch that’s hairy chested, standing four-square and proud as if that’s the way it was meant to look. Once you’ve seen how tremendously taut the Megane’s bodywork has been stretched over much-modified underpinnings, you’ll never look at a stock Megane again without feeling like something is missing. 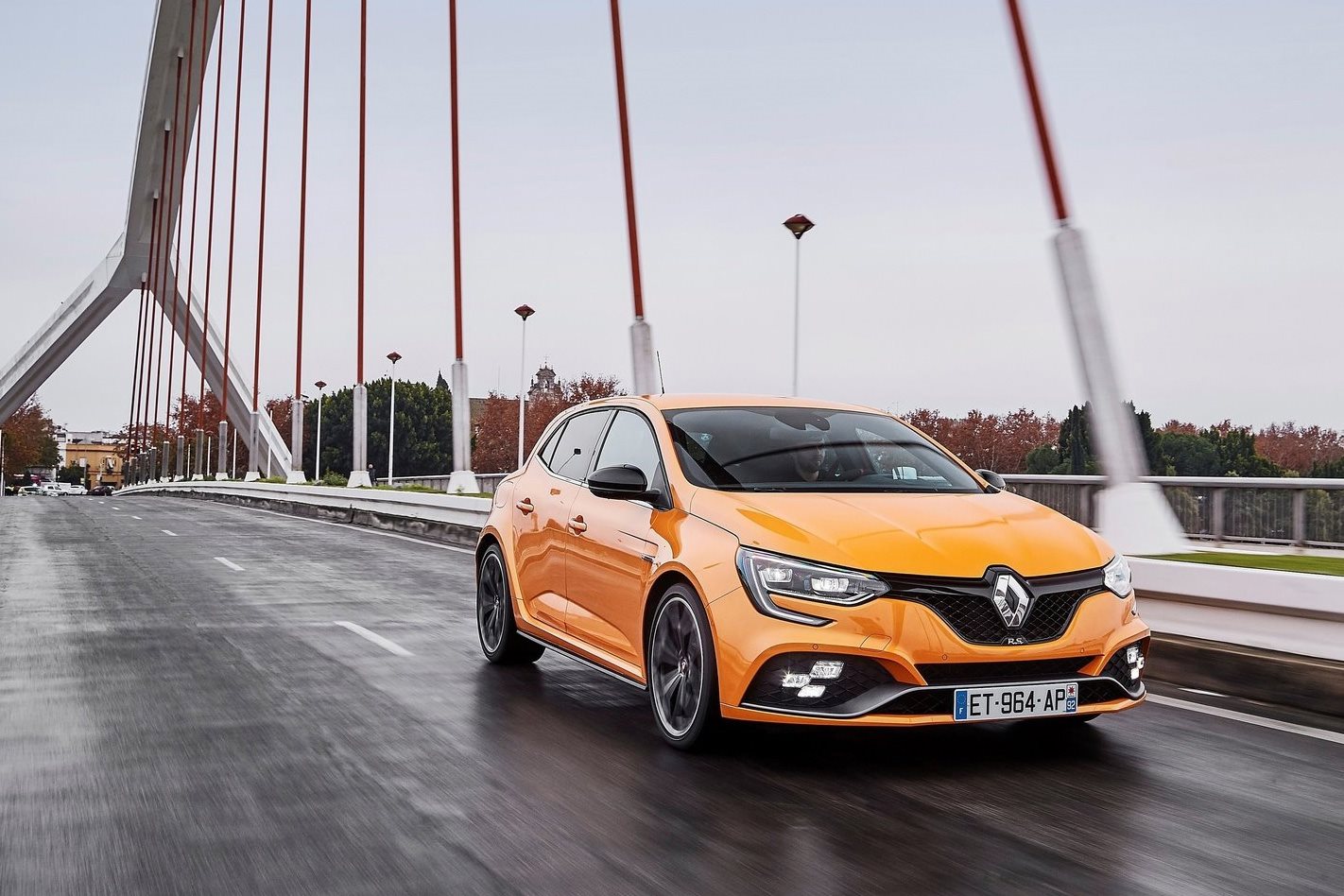 Here’s the core of the matter: front guards widened by 60mm, and rears 45mm broader than a stock GT, with the ride height 5mm closer to terra firma. Two suspension tunes will be offered – a core Sport set-up and a (roughly 10 percent firmer) Cup version with bespoke spring, damper and anti-roll bar rates, as well as adjustments to the ingenious hydraulic compression stops (“a shock absorber within a shock absorber”, according to Renaultsport). Inspired by rallying, this consists of a secondary piston within the damper unit that aims to dissipate energy without transferring it to the wheel like a traditional bump-stop would. And it works. Brilliantly.

Despite a reduction in engine capacity, the Megane RS280’s new-generation engine (shared with the new Alpine A110 sports coupe) smashes out 205kW at 6000rpm and a chubby 390Nm from 2400-4800rpm. Yet this engine will comfortably pull from just 900 revs without complaint, as well as nail the 7000rpm cut-out without choking. Tied to an eager six-speed manual with perfect pedal placement or a heavily re-engineered six-speed EDC dual-clutch (for the first time in a hot Megane), it forms a drivetrain that effortlessly complements the new Megane RS’s supreme agility.

This is also the first time that I think anyone could honesty say that a synthesised induction note actually sounds real. According to the head of Renaultsport’s engineering department, Olivier Guintrand, they spent “a very long time” trying to perfect the acoustics of this new drivetrain. And the result is both a rich induction sound inside the cabin and, thanks to ignition-cut electronics, a fruity, crackly exhaust note that, on the EDC version, fires out one of the best exhaust upshift barks in the business. Make no mistake, the tough new Megane RS has the muscle to match its machismo. 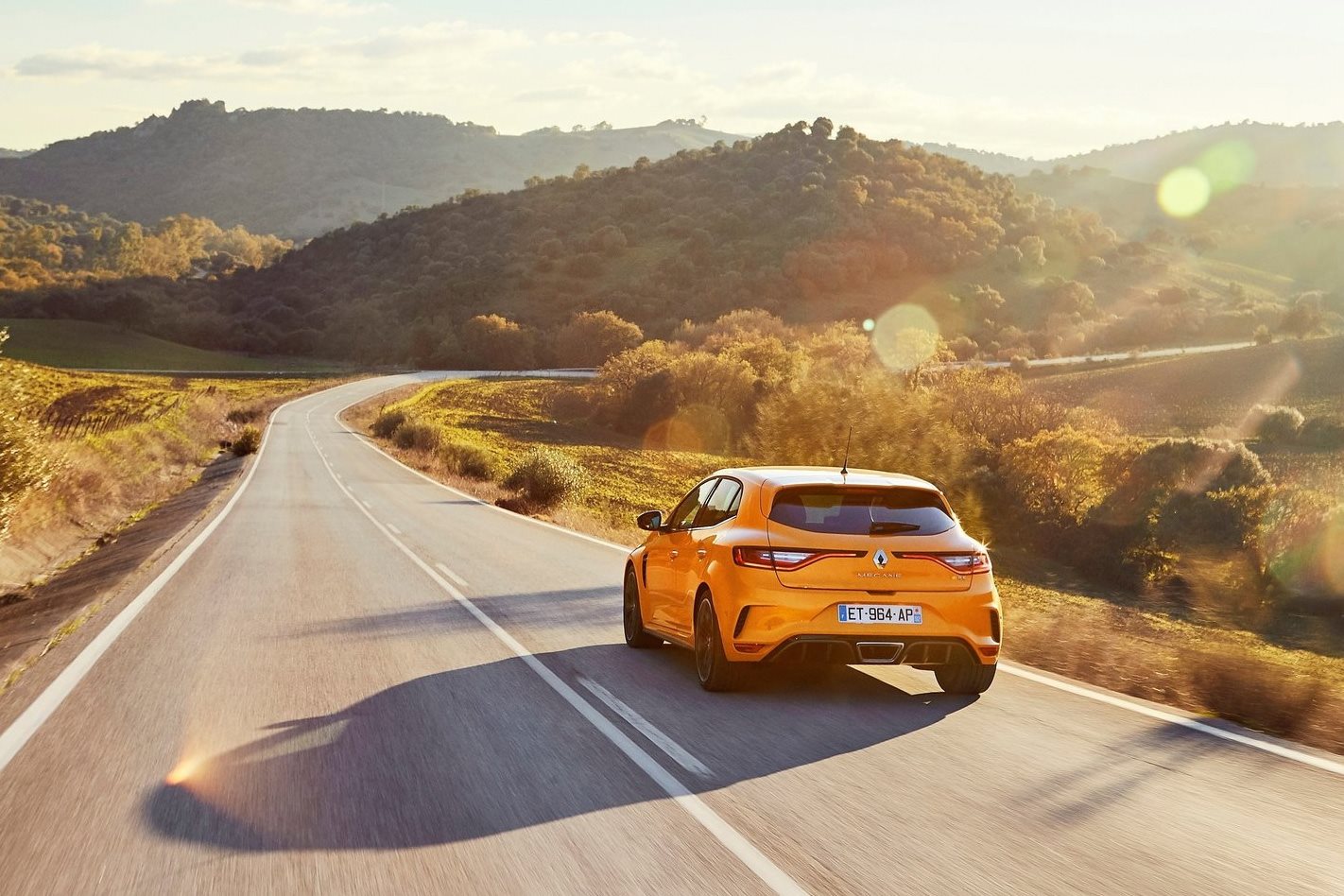 Chassis wise, we drove the dual-clutch Sport version (in stunning pearlescent Tonic Orange) on some wonderfully challenging roads in southern Spain, and a manual Cup on the famed Jerez racetrack. Despite any fears you may have about the ‘automatic’ Megane RS with ‘soft’ suspension being a dunger, it’s anything but. Brilliantly damped, to the point where it feels Hoovered to the road surface, and capable of tackling the sort of hits you’d imagine could crack a sump, it’s this mixture of discipline with total control that defines how the new Megane RS drives.

The ‘4 Control’ four-wheel steering adds an interesting flavour too. Despite wearing fat 245/35R19 Bridgestone Potenza S001s, the smokin’ Megane’s turning circle is just 10.3m, making it not only a champion in tight spaces but a mega-agile device when the road turns pretzel.

Normally, the rear wheels point in the opposite direction to the fronts up to 60km/h, but in Race mode (as opposed to Sport, Neutral, and Comfort, as well as an impressively configurable Perso mode), this threshold is extended to 100km/h. And while there’s a degree of trust that needs to build when pushing the Megane’s chassis at first (some people don’t like the rear-endy, oversteery feeling of the back end, especially on our very slippery test roads), there’s actually plenty of purchase here. 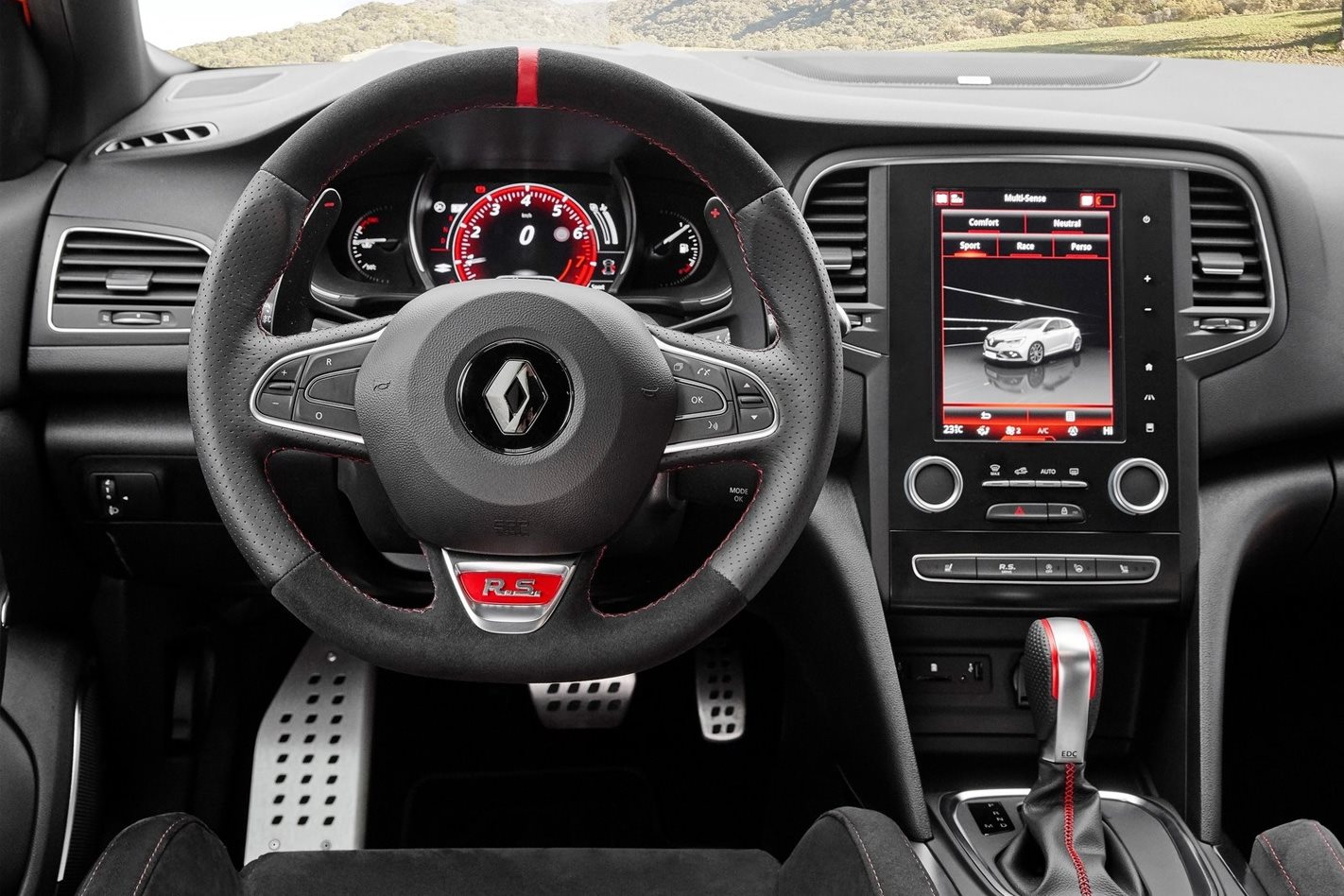 Thanks to the steering set-up, you need little input from the Megane’s superb perforated-leather and Alcantara wheel to change direction. Yet the car doesn’t feel nervous either, tracing challenging cornering lines with crisp accuracy and encouraging keenness. Even the ESC (in Sport mode) is on the bandwagon, nibbling at the edges when it needs to with the sort of finesse a car like this deserves. And besides the odd moment where it’s a gear too tall, the dual clutch ’box is also a cracker, reading the conditions with respectable accuracy and finding the right gear at least 85 percent of the time.

Those moments where the EDC ’box isn’t doing quite what you want does expose one flaw in the Megane’s towering repertoire. The column-mounted shift paddles are too short. Because the driver’s ergonomic set-up has to accommodate Renault’s infamous ‘carbuncle’ multi-function audio protrusion, there simply isn’t room for the paddles to extend any lower. And while we’re at it, full manual seat adjustment with lever-activated backrest rake isn’t ideal for everyone to achieve a perfect driving position (though my 179cm frame had no issue whatsoever). Nor is the wind noise from around the mirrors and A-pillars at 120km/h, or some of the resonances from the tyres on coarse surfaces – all easily drowned out by the robust Bose stereo.

Unexpectedly terrific as the dual-clutch Megane RS280 Sport is, it’s the manual Cup that really needs to nail the brief if it’s going to withstand Honda’s new-gen Civic Type R onslaught. And after nine laps at Jerez, there’s a bloody strong chance the new Megane Cup is everything Renaultsport wants it to be. 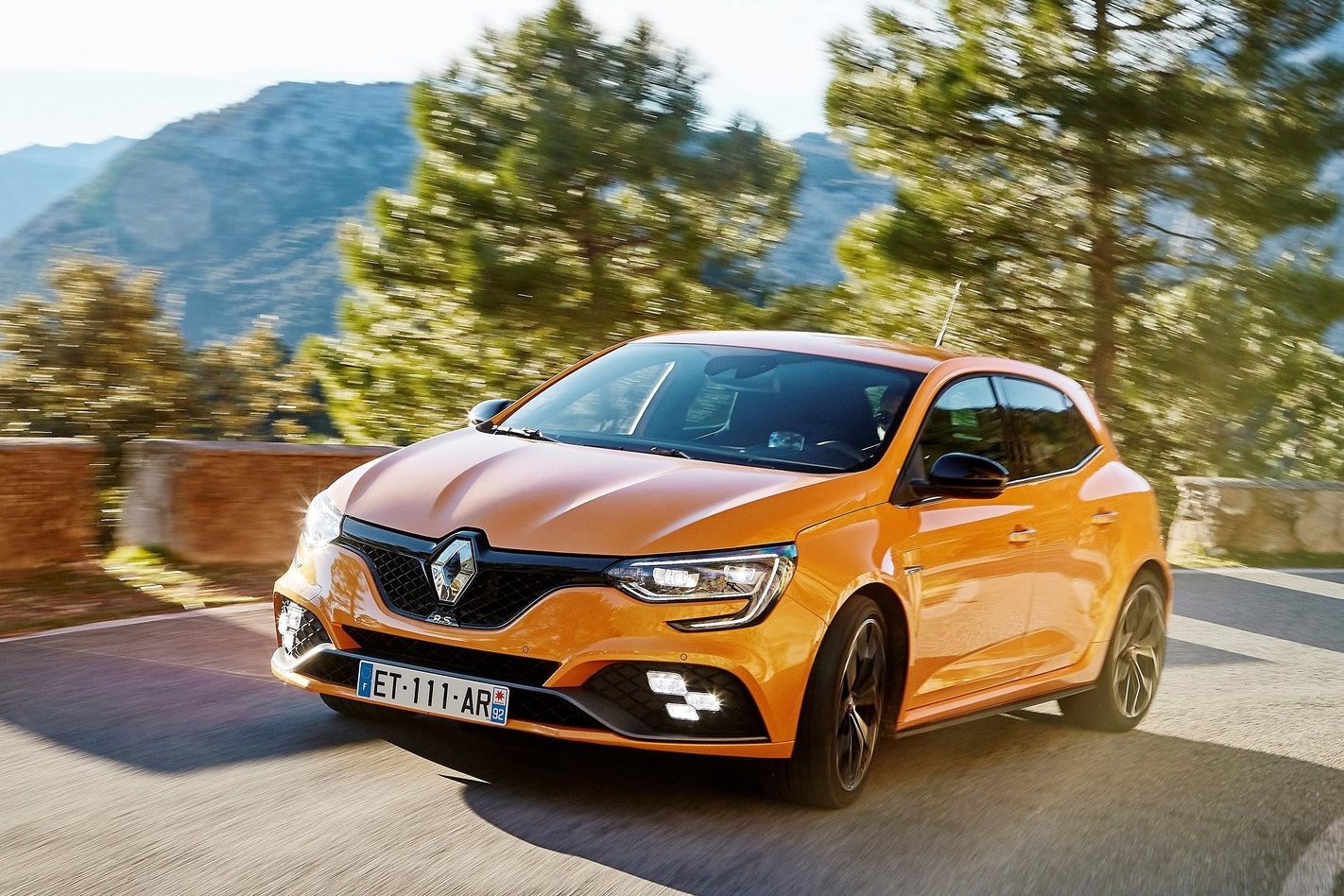 With a mechanical torsen limited-slip front diff (instead of the electronic wizardry and torque vectoring of the Sport chassis), the Cup fires out of Jerez’s third-gear hairpins and through a fabulous series of tight corners set up to demonstrate the Cup’s agility with, well, wonderful agility.

With the ‘multi-sense’ drive mode selection set to Race (meaning ESC off), you can throw the Megane around and it responds with lovely oversteer slides that remain fluid and focused, just like the car itself. And while the brakes on our Cup test cars – 355mm vented-disc fronts and 290mm solid rears, clamped by Brembo calipers – were starting to groan after an entire morning’s flogging, there’s little reason to doubt the new Renaultsport Megane RS280’s credentials as a potential best-in-class hot hatch.

In fact, all the things that aren’t quite perfect on this car – some dud cabin plastics and underdone rear-seat packaging being the main two – already apply to the regular, rather lukewarm Megane. So the fact this super tough-looking bully of a hot hatch has emerged so darn strong and seductive speaks volumes about how much engineering effort has been invested in making it great. 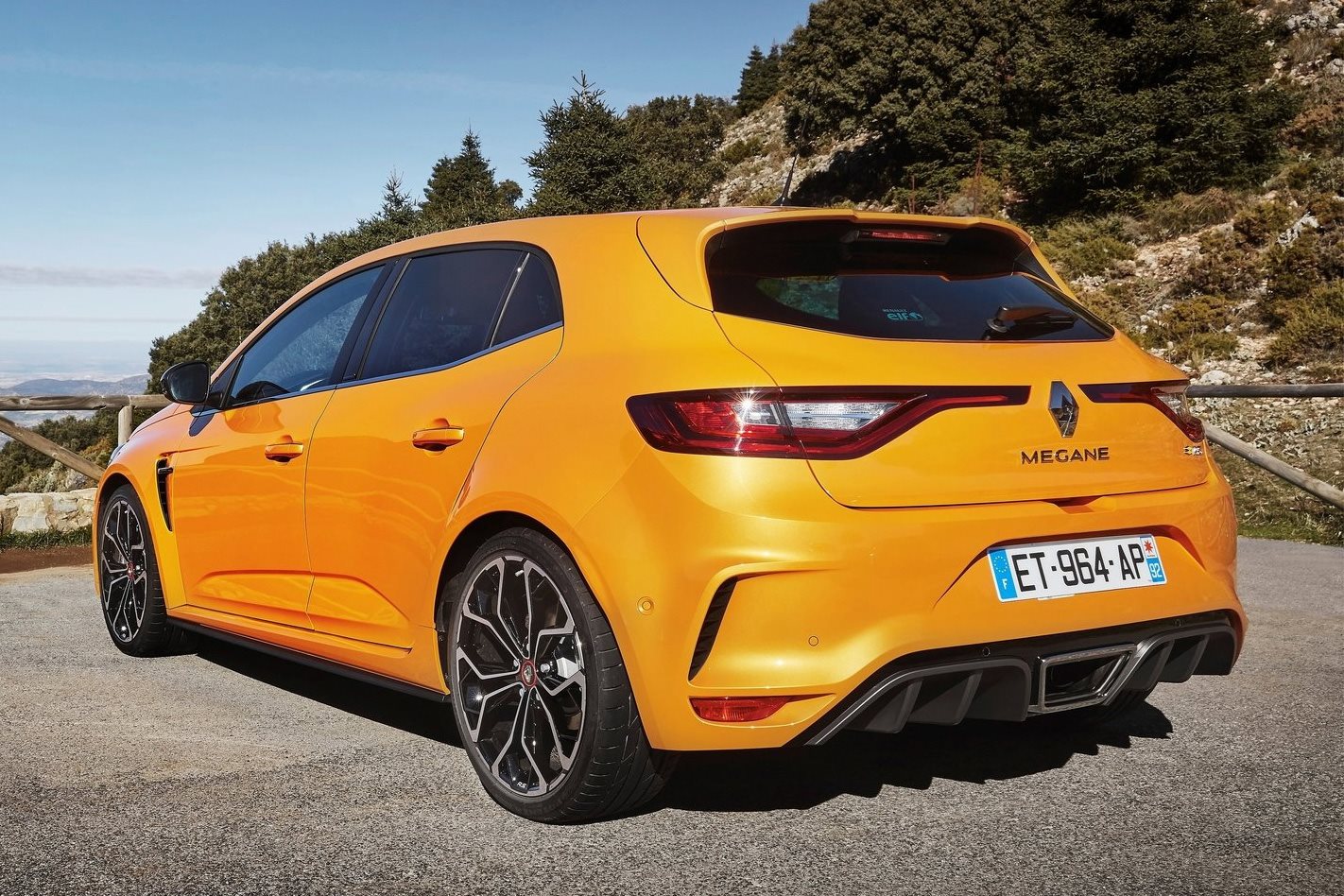 And there’s more to come. Expect a Paris Show reveal of the forthcoming 220kW/400Nm Trophy version, complete with its own styling and wheel treatment, and an even higher grade of tyre, plus – if everything goes according to plan – a new Nurburging lap record for a front-driver, just to put the Civic Type R in its place.

As for Oz-bound Megane RS280s, expect the Sport to arrive in around September this year, in both manual and dual-clutch varieties ($45,000 to $47,500 estimated), though we won’t get the same drivetrain with the Cup chassis. That’s being reserved for next year’s $50K-plus Trophy version. Pity, though – with its sinister black rims and sub-$50K sticker, an RS280 Cup has a lot of appeal for Aussie Renaultsport fans.

As it stands, broad and tough with more than a hint of bad-boy character, the new-gen Renaultsport Megane is pretty much everything we wanted it to be. A better all-rounder than its predecessor without scrubbing off too many edges, yet a car brimming with personality, individuality and flavour. That’s what we want in a French hot hatch, and that’s exactly what you get here.