It's not the first time Ford has rolled out this nameplate

As a bloke whose formative automotive years were littered with numerous subscriptions to increasingly obscure English car mags (Cars and Car Conversions, anyone?), the Ford Puma does not, to me, signify small urban crossover.

The evocative name speaks to a small, slightly ungainly but half-decent little coupe of the late 1990s that – for one ill-fated limited edition known as the Racing Puma, at least – even came with Alcon brakes and a slightly spicy 1.7-litre four-potter, destined to be flung at hedges in the English countryside by people willing to pay a $5000 or so premium over the Subaru WRX of the same era. 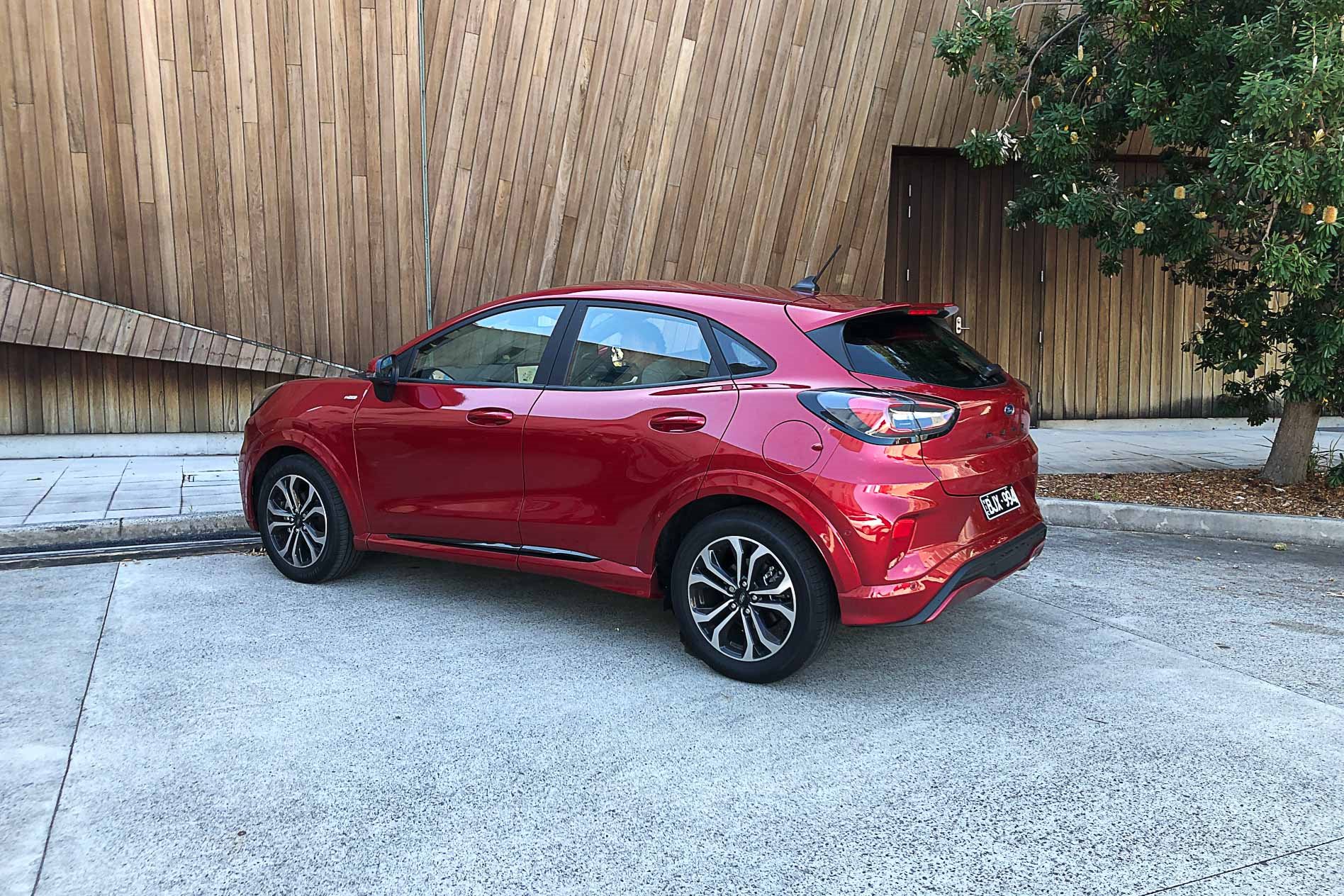 This, then, is not the Puma of old – yet the two share some similarities. For one, both can name the Fiesta as kin, and both are driven through the front end.

That’s pretty much where the story ends, though. The 2020 Puma has a very different role in Ford’s car-free, SUV-heavy future, shoring up a small crossover campaign that’s been pretty badly dented by the underdone and unloved EcoSport.

Our ST Line wears $650 worth of Lucid Red paint and a Parking Pack that, at $1500, includes adaptive cruise control with stop/go start, evasive steer assistance and lane centring, active park assist, front parking sensors and blind-spot monitoring, for a total ticket of $36,140 drive-away. 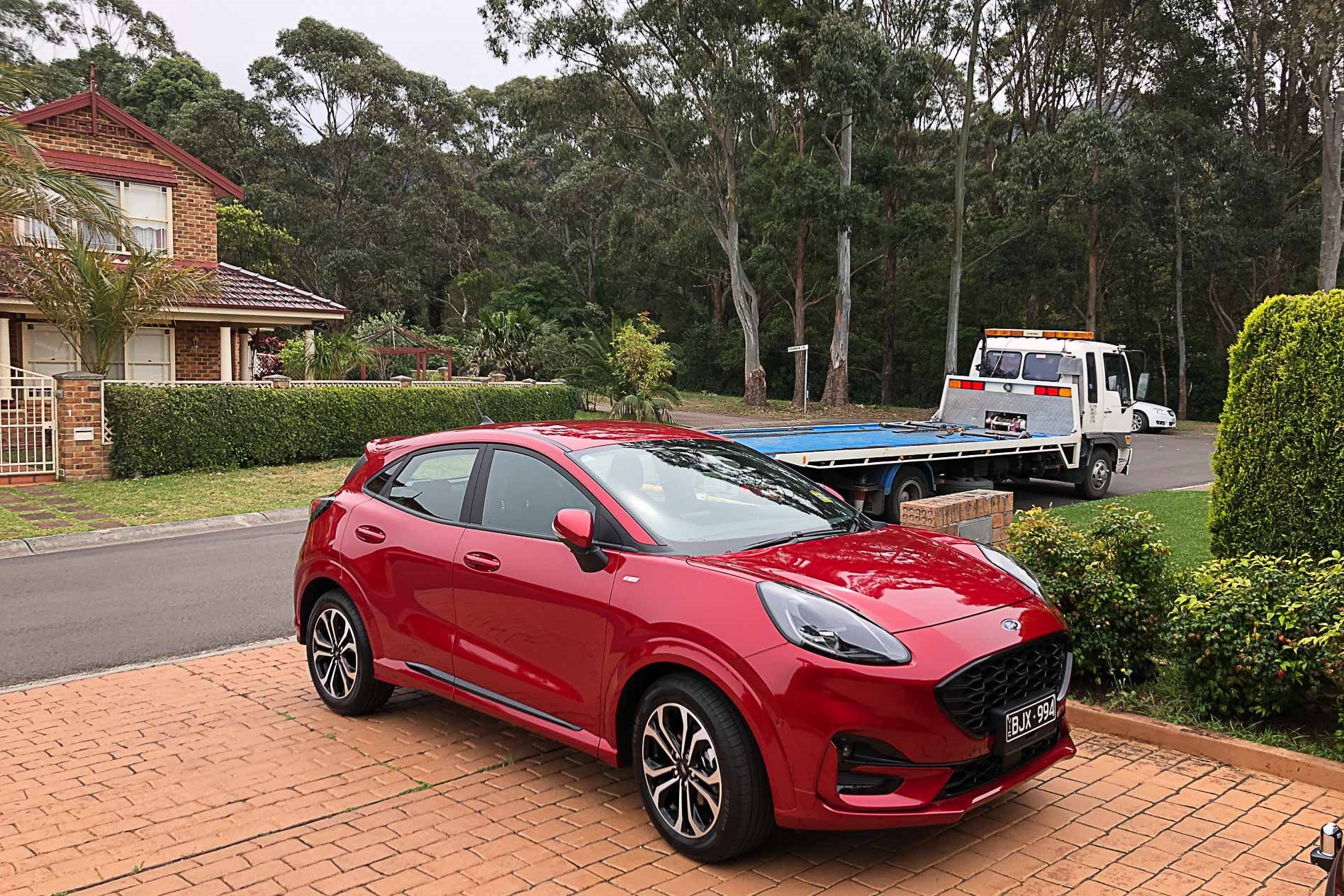 Ford says that the drive-away pricing would be offered until the end of 2020, but my guess is you’ll be able to reference these numbers as a starting point on the dealer’s lot.

What do you get for your money? A compact five-door, five-seat crossover, with a decent little 92kW, 170Nm three-potter, a well-behaved seven-speed dual clutch gearbox, a nicely presented interior with Ford’s generally excellent Sync 3 multimedia set-up, a decent array of active and passive safety and an inoffensive demeanour.

While it’s the small SUV category that gets all the glory, the light SUV space is starting to gain a little ground.

Mazda recently shuffled its batting order, bumping the dominant CX-3 down a rung to make way for the CX-30, and while it starts at a drag-’em-in $22,710 for the Neo Sport manual, our Puma ST-Line compares better with the $32,840 sTouring.

How will it fit into the Robson lifestyle? We’re in a transition phase, actually; our kids have all but grown and our hobbies have changed, meaning that we are looking at moving down in size and price bracket for the next purchase. 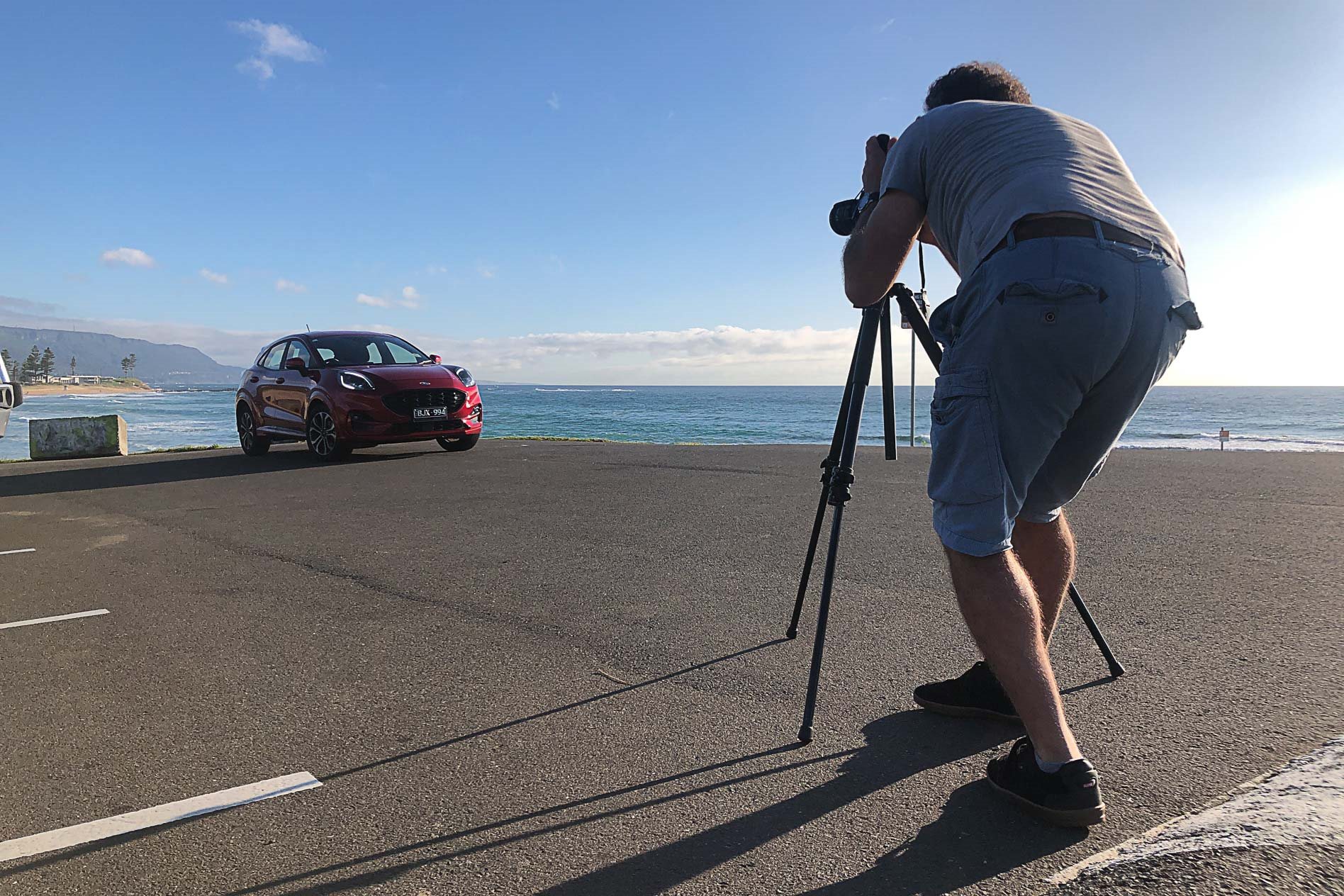 The new generation of compact crossovers provides a variety of options from mild to wild for people in our position, and I’m interested to see whether the Puma can worm its way into the affections of the Better Half during its four-month stay.

“It’s pretty zippy,” she remarked early on, “and I like that the indicators are on the correct side of the steering wheel.” 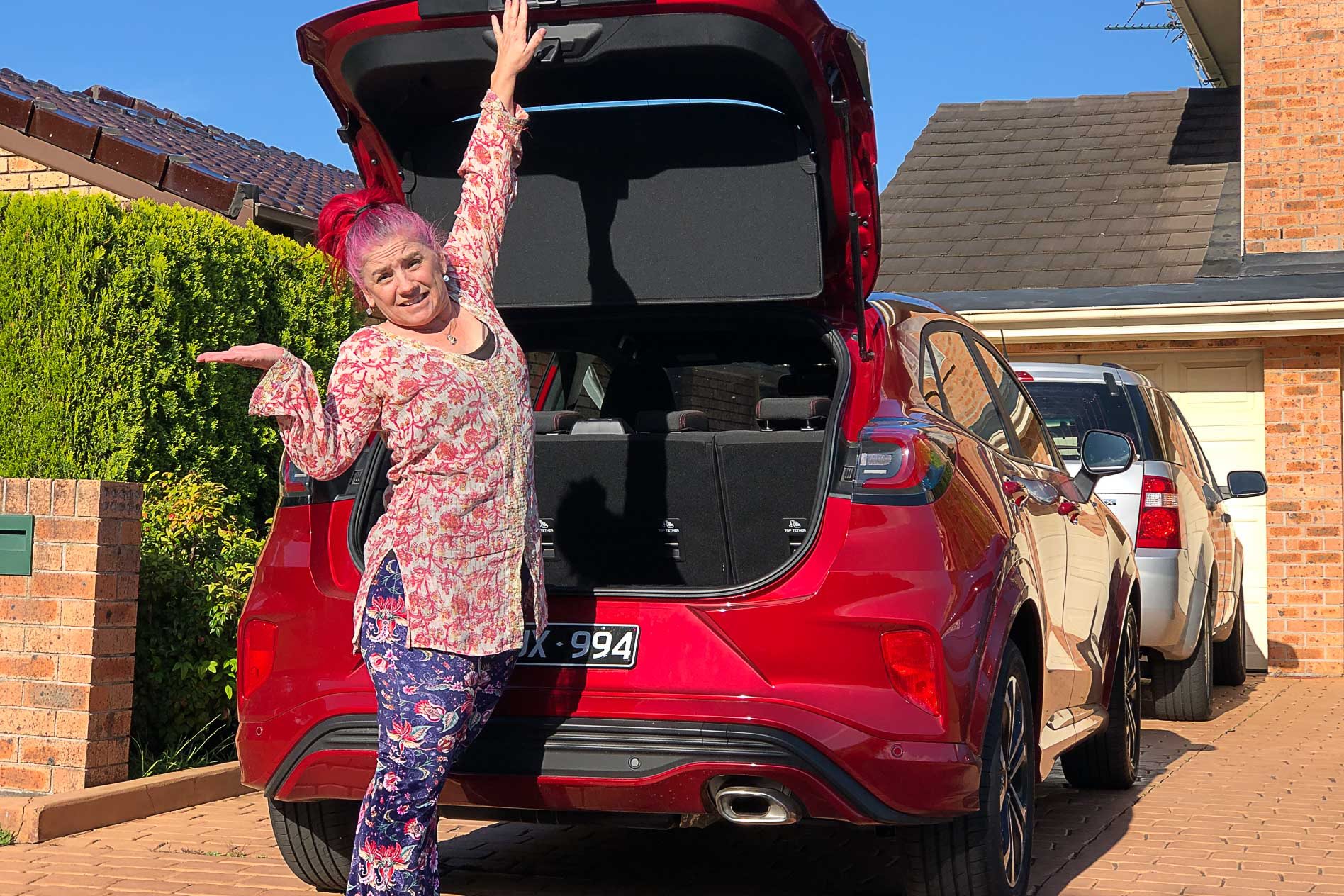 It’s these small details that can set a car apart; I’ve got a mate who flat-out refuses to buy a car with the indicator stalk on the right side of the column. Fussy? Maybe, but it’s his money.

For mine, the Puma is an odd one to get a grasp on initially. The ride/handling compromise, for one, immediately jars with me – quite literally, with what feels like a real lack of wheel travel making for a brittle, bump-laden ride on even moderately pockmarked surfaces.

For me, this is where a crossover should excel, using its extra ride height to bring compliance and suppleness to the party.

Its steering, too, is oddly lifeless and disconnected, with no relationship to speak of between driver’s hands and the road surface. Mel doesn’t mind it, though, so what do I know?

Given their ages, too, the front seats are used more than the rears, which are now largely the domain of small, yappy child substitutes.

So it’s the cut and thrust of suburbia for the Puma for the next few months, with the odd intra-city run thrown in for good measure. We’ll play with tyre pressures to try and calm the ride and report back, too.

A hard and fast rule for any car entering Chez Robson is the ability to lug large, dirty bicycles. How does the diminutive Puma fare? 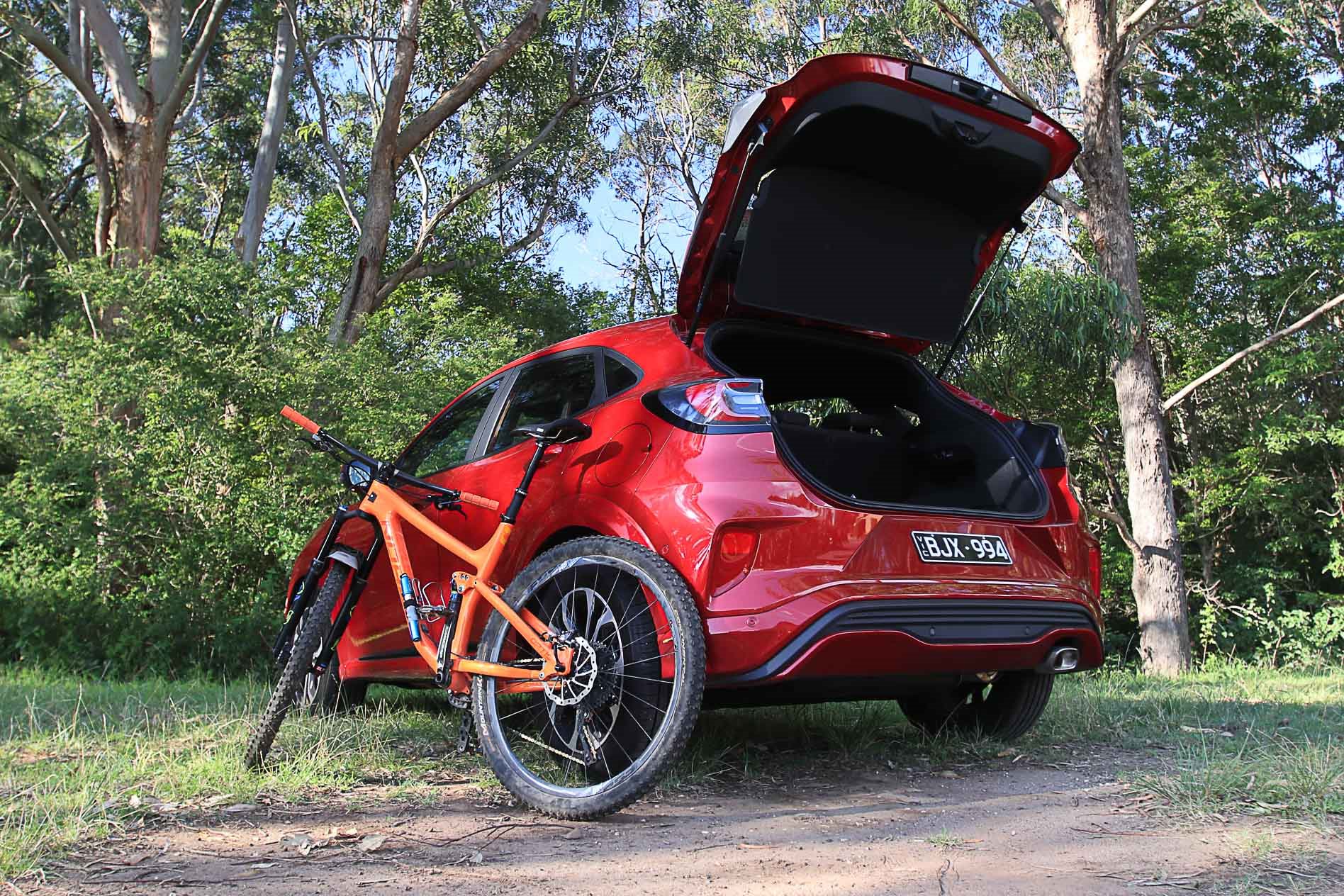 The modern mountain bike is a pretty amazing device – but, just like televisions and cars, they have subtly grown in stature over the years to the point where they almost need their own transportation systems.

My after-hours life for the past 20 years has involved mountain biking in some form, and the transportation thereof. Ergo, I’ve never had an MX-5 or a Lotus Elise on long-term duty.

Compact SUVs, though… I’ve had a few and the results have been mixed when it comes to adding two more wheels, some carbon-fibre and smelly bike kit. At first blush, though, the Puma has the runs on the board in the boot capacity stakes, especially when you’re eyeballing its rivals. 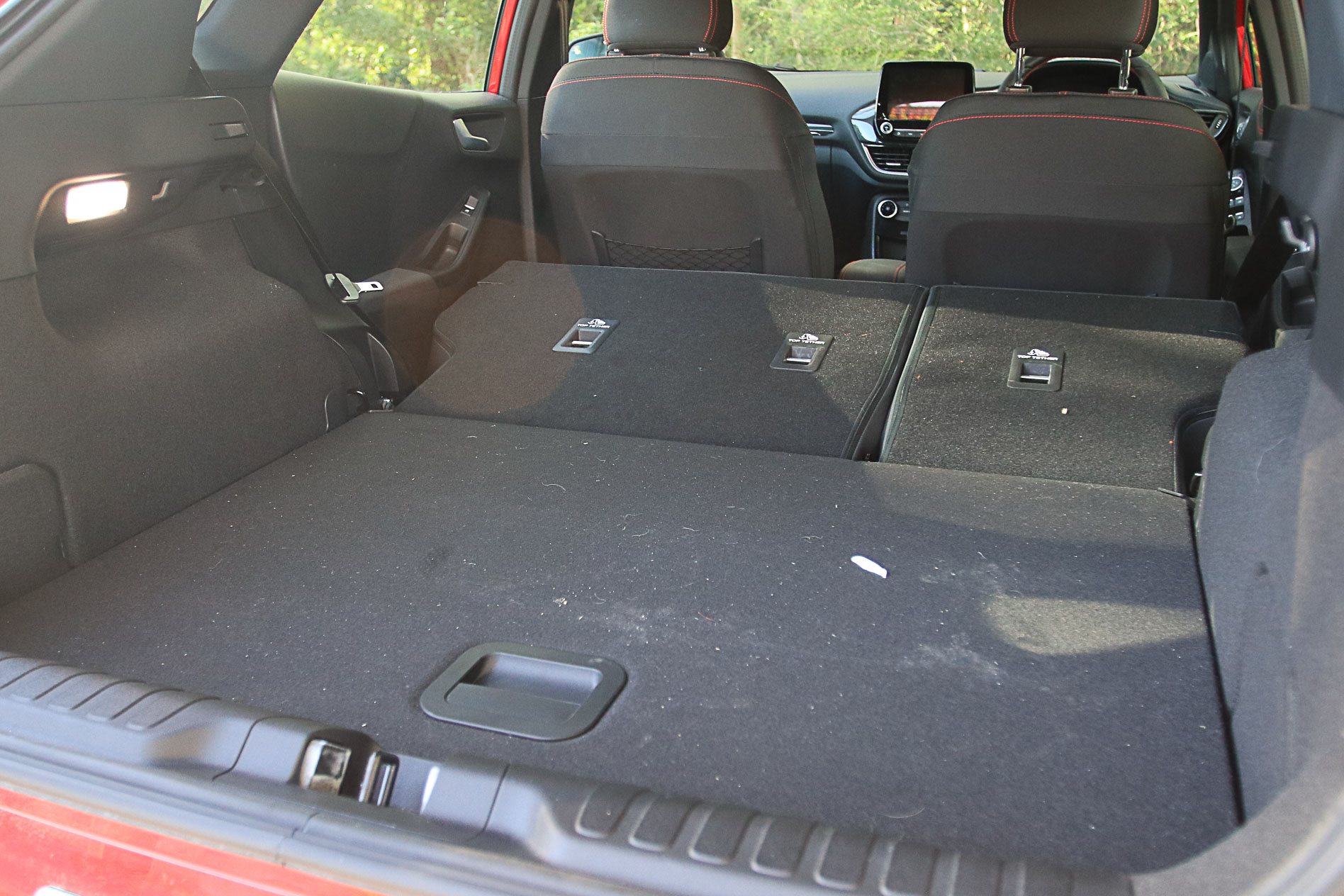 For example, the claimed boot area of 410 litres smashes the CX-3’s capacity by 60 litres, but falls short of the Juke’s frankly amazing 422-litre claim. However, adding wooden blocks to a cargo area is one thing… I need to see for myself whether my wee orange beastie can snug into the Puma.

Dropping the seats is relatively easy; there are no levers in the cargo area but the stretch to reach them is not a long one.

The rear belts can’t be restrained, which is annoying, but the novel cargo area cover (below) rises out of the way with the tailgate, which is bloody handy. I can’t tell you how many cargo covers have ended up in my shed. 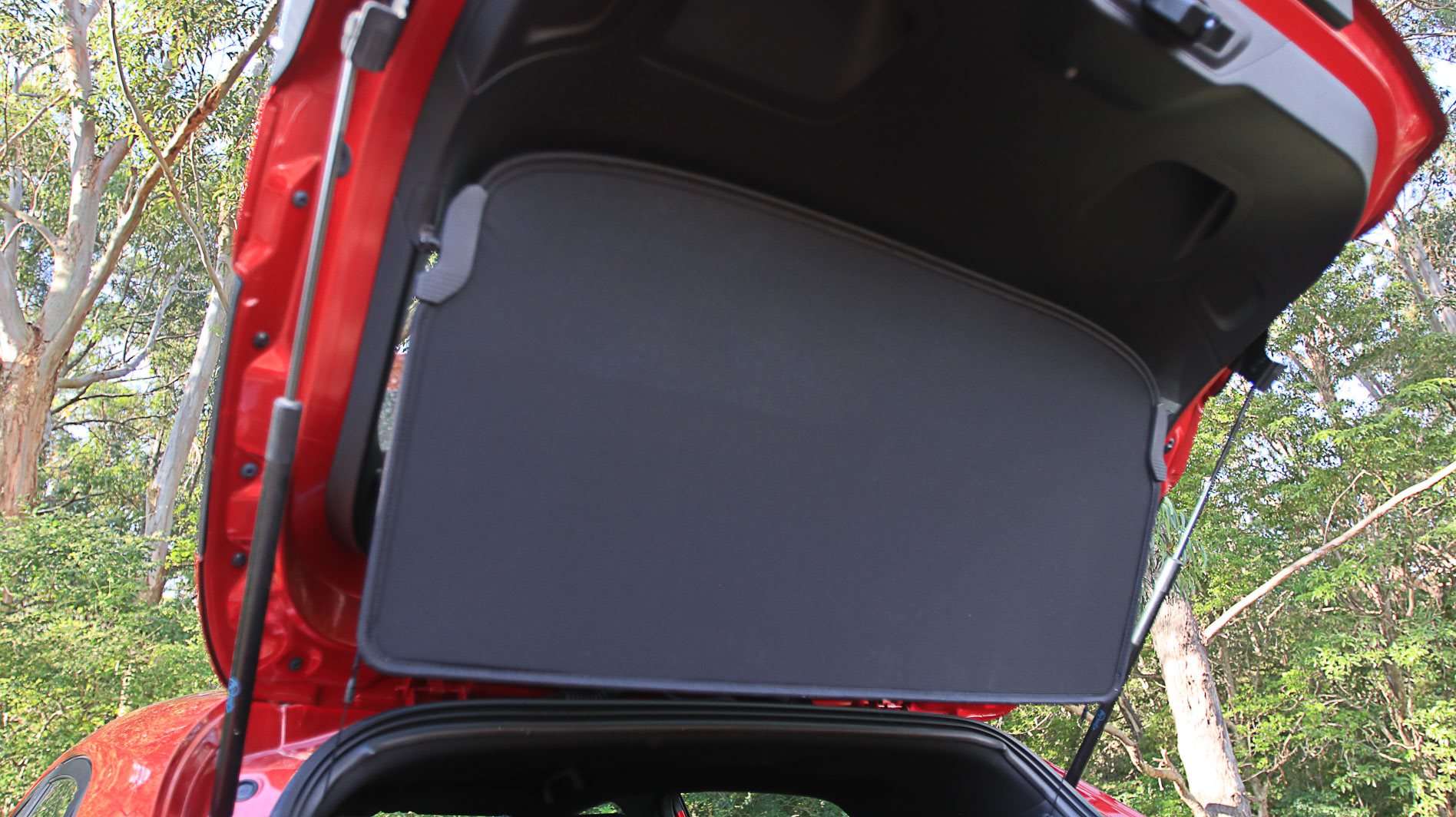 Inserting my Norco Optic with both wheels on was never going to happen, to be fair, but dropping out the front wheel is not a drama.

However, the Puma’s boot floor-length is not quite long enough, so I’m forced to slide the front passenger seat almost all the way forward to accommodate my unwillingness to drop the rear wheel out of the bike (leaving it in means the chain is much less likely to lube up the seats). 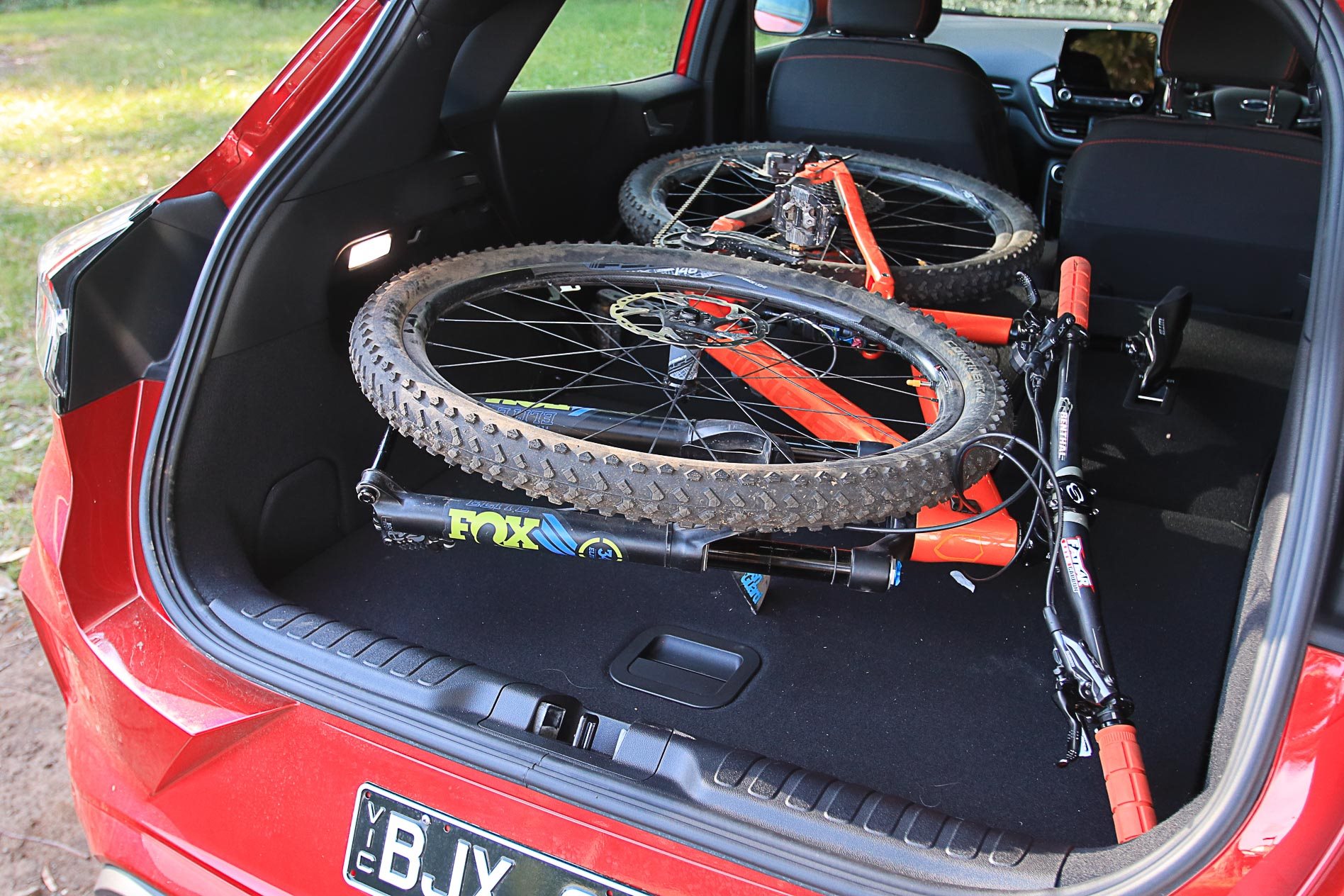 With biking comes gear, which needs to be stashed. A somewhat convoluted system to raise the Puma’s boot floor (below) to create a level surface also reveals a 60-litre wet bin – similar to what the Territory had back in the early ’00s – which hides a helmet, Camelbak and other stuff easily. 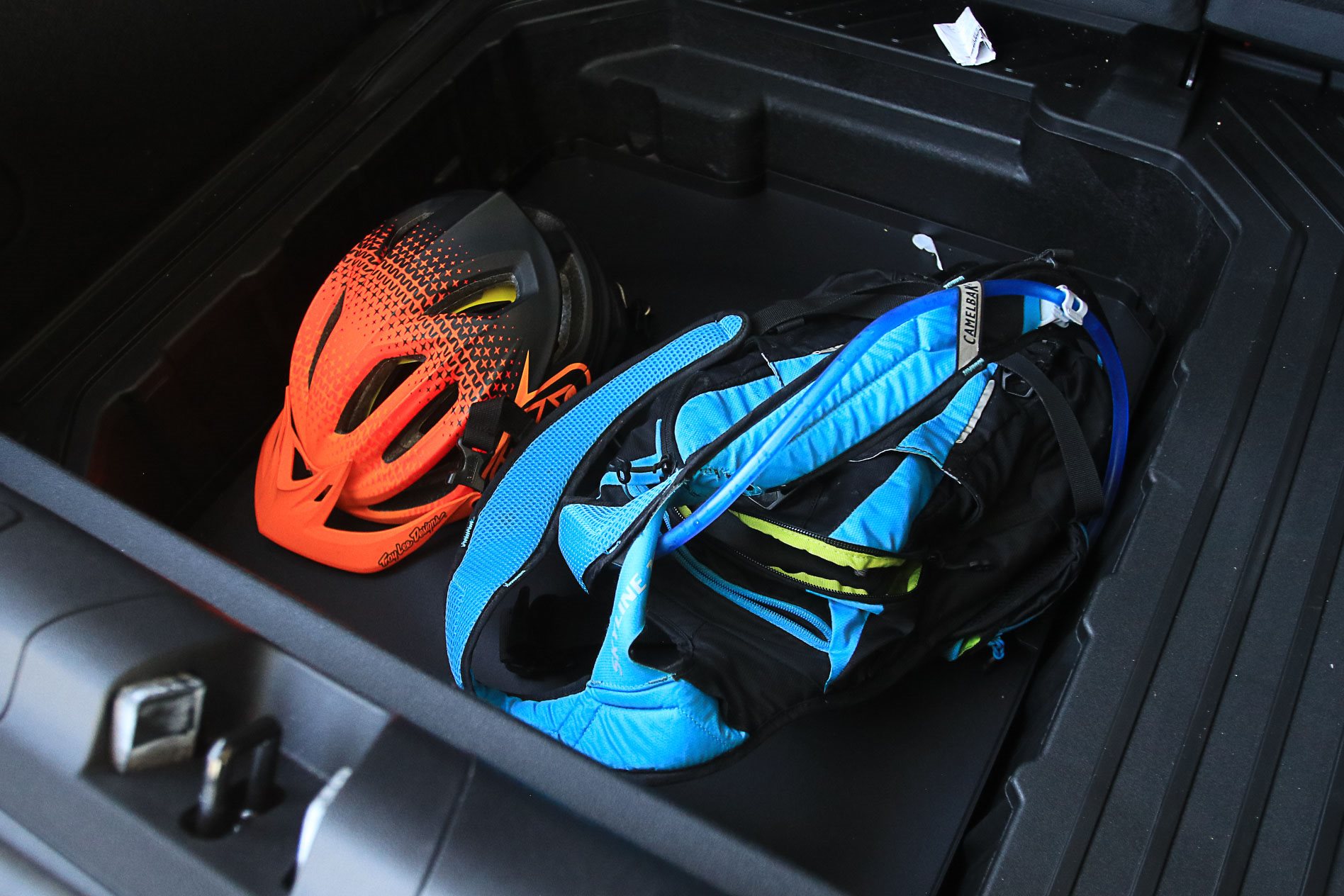 So I’d called that a result. Two bikes could be squeezed in the rear without wheels mounted, I’d suggest, and the relatively low roof height could see a pair of bikes chucked up top, too.

Much palaver is made about the flexibility of crossovers, but often it’s a hollow claim. The Puma, though, has kicked off things in the right way.

Robbo gets toey in the Puma

I’ve been blessed/cursed with sensitive feet. No, I don’t mean I break out in hives if I expose them to saltwater or anything like that. It’s more how my tootsies interact with the pedals of a car; in particular, the middle one.

I have no idea why I’m so fussy with brake feel. It’s not like I was subjected to ritualistic sensory training as a child that set me up for a life of being overly judgemental about vehicle retardation.

So what do I like under my right (or left, I’m fine either way) foot? I like a medium-high pedal, with a low-resistance transition to a well-modulated, fulsome engagement that is consistent right through the application, and one that transitions off-brake just as nicely.

RELATED How do brakes work? 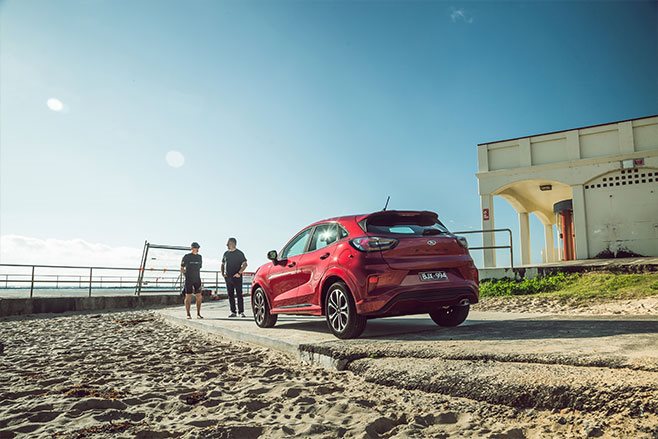 But as I guide the Puma through our local urban landscape, wincing every time I try and balance that crucial point between activation and retardation, I can’t help but wonder why any car feels any different to any other – ever. Look at the bits and bobs required to make a brake work in a modern car. A pedal, lines to carry fluid, a booster to multiply your pedal effort, a caliper, pads and a rotor. Not much, then.

Sure, tyres have a role to play, and electronics also have a say, but the fundamentals of a modern braking system are tick-box items now, over-engineered, costed to within cents of their lives, their physical existence and associated terabytes of testing data collated (I imagine) as ones and zeroes on a hard drive that can be called up at whim should an engineer want to replicate a task. Pedal pivot angles, brake line length, caliper type, piston diameter… it’s all science now, surely.

For whatever reason in the Puma, though, it feels like there’s an extra millimetre or kilopascal or something that’s been added to an engineering file somewhere that has the effect of rendering the Puma’s brake pedal as an on-off switch.

Brush the pedal at suburban speeds and there’s a wall of fuzzy, muted resistance that provides almost nothing in terms of slowing effort before – wham! – stage two kicks in like an Apollo rocket dropping its primary stage, standing the Puma on its nose. 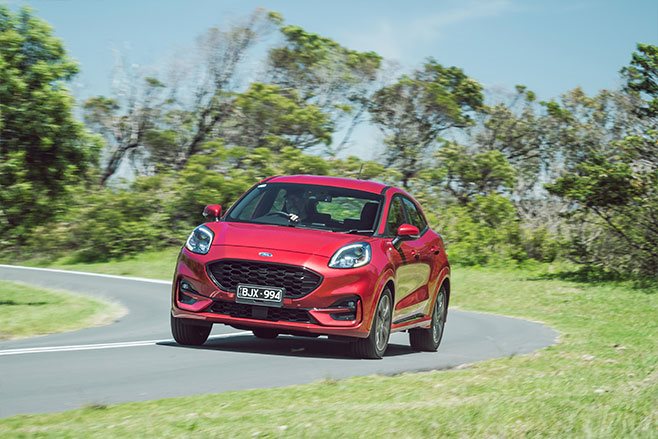 Your passenger, long tired of your endless car shenanigans, gives you their best side-eye glare, even though there is nothing that can be done to amend it from your side. The feeling improves with more speed onboard… but honestly, at sub-60km/h velocities, the Puma’s brake feel makes me want to walk home. And three drivers are reporting the same thing, so it’s not just me.

So to my question; why does this even have to happen? The Puma rides on the older B2E platform, so it’s not as trick as the new C2 version that rolls beneath the larger Escape – but the last Fiesta was a terrific little thing, with loads of brake feel and a sweet balance at the pedal.

MORE These are the small SUVs with the best braking performance

Yes, there’s pad feel variance, and I do wonder if a different compound would improve it. The Dunlops on the Puma are quiet and supple, so I don’t suspect them at all. 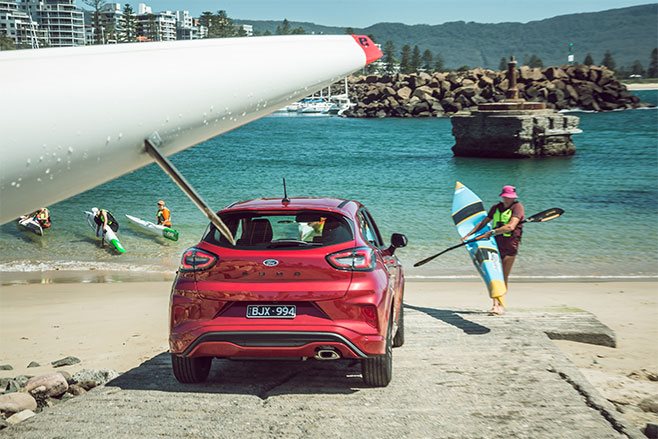 The curiously tied-down nature of the Puma’s suspension tune is a bit player, though; firm off the top, the springs don’t allow for sufficient pitch to contribute to brake feel at lower velocities.

Putting aside that (large for me at least) grievance, the Puma’s life in suburbia continues unhindered. The harder, less luxurious plastic surfaces between the front seats are holding up well to the generalities of life, the three-cylinder engine continues to impress with its surprising vim, and the combo of the faultless Sync 3 screen and digital dash still feels special every day. 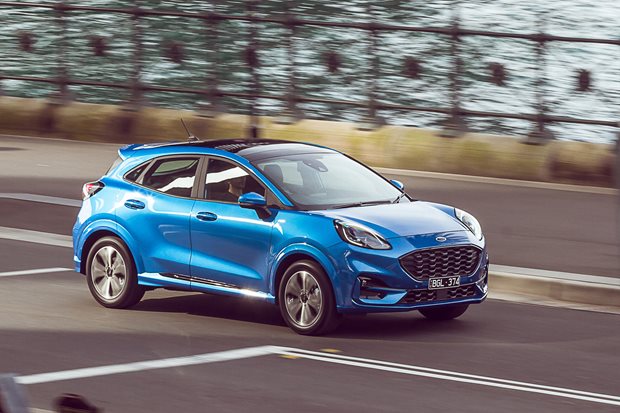 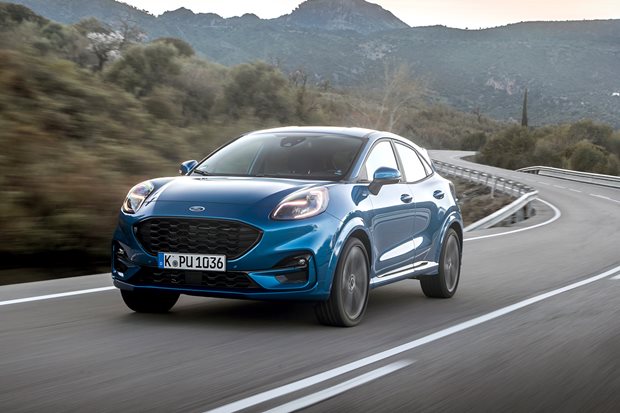 Ford’s Puma small SUV launches Down Under, so what have we got to look forward to? 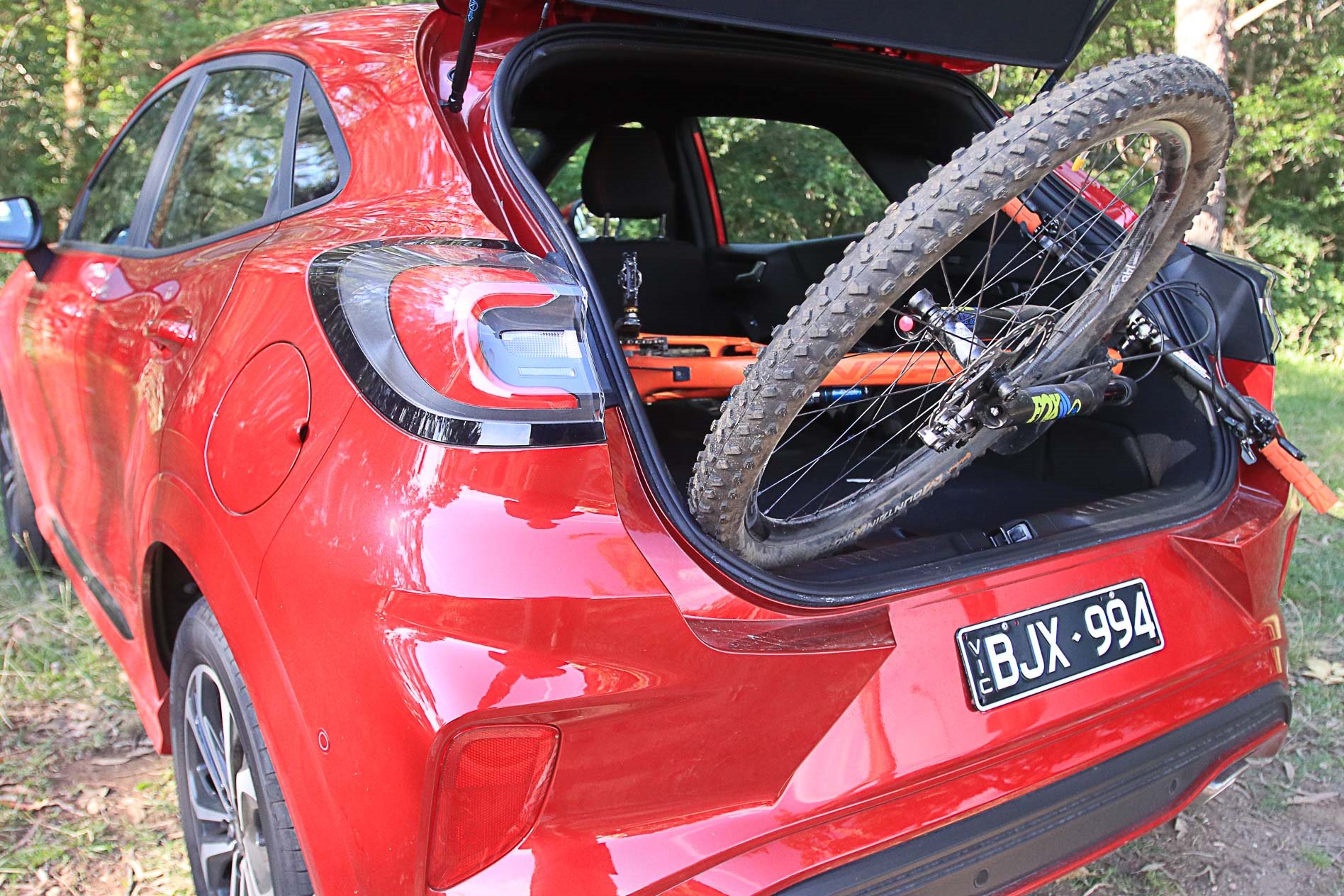 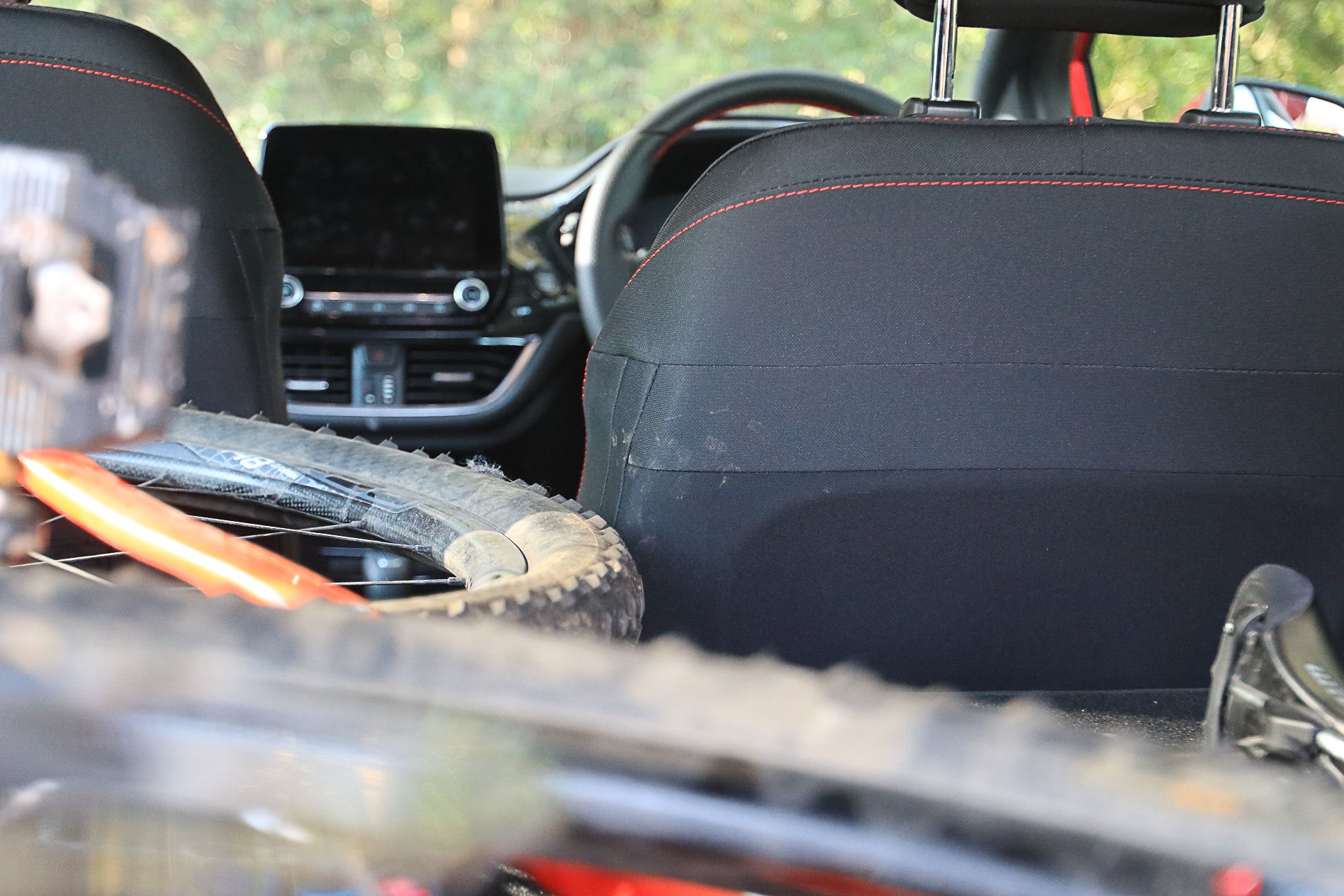 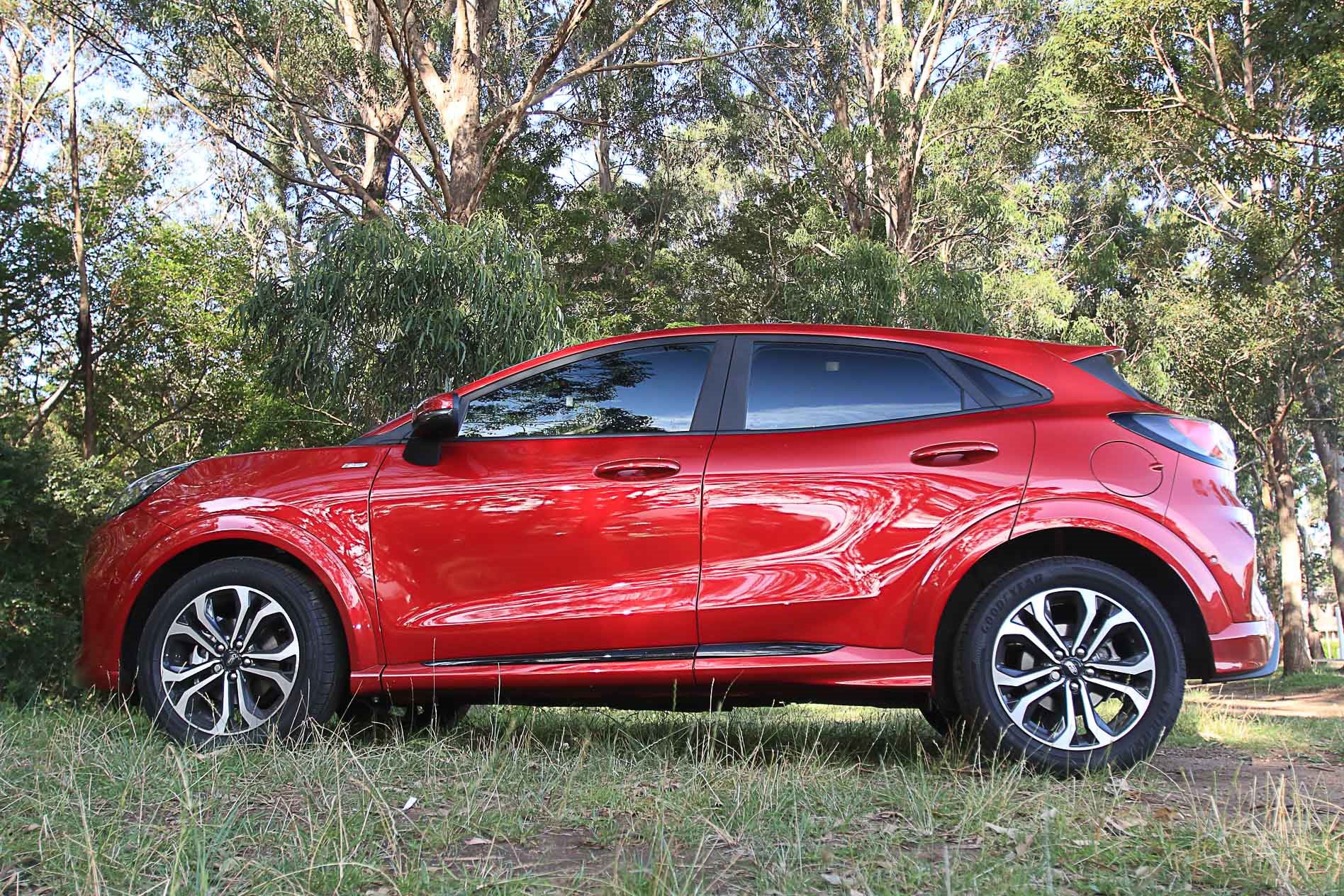