YOU don’t see too many crazy modified VW Amaroks. Sure, there are plenty making big power thanks to that mighty V6 engine, and there are loads set up as comfy tradie vehicles.

There’s plenty of tourers as well, built to travel the countryside in style. But answer me this, when is the last time you saw a VW Amarok on 34-inch tyres? 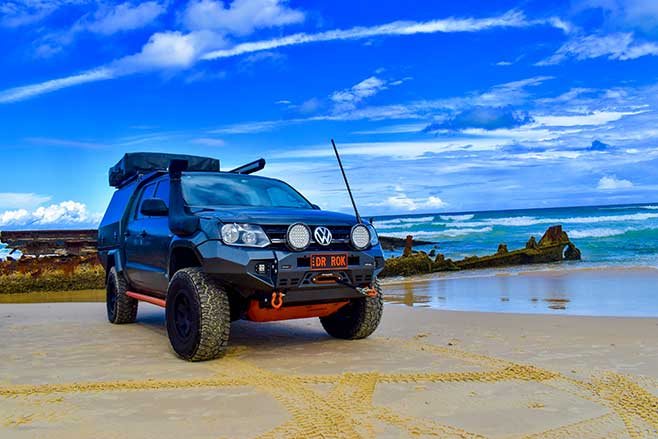 “I kind of fell into it by accident,” says Jeremy. “I’ve owned a bunch of Land Rovers, including a yellow Defender 130 called Big Bird, but when the engine died early on thanks to a dud EGR cooler, I decided to give the Amarok a go. We’ve created a real niche in the market, and are now the go-to shop in NSW for anything VW Amarok.”

When your bread-and-butter is building and servicing Amaroks, you know the shop truck is going to be pretty damn serious. Introducing Dr Rok, what I’m calling the most modified VW Amarok in Australia.

Jeremy wanted the Rok to be as practical as possible, but also as light as possible. This is the reasoning behind using the Rival front bar from Drivetech 4x4 as it’s made from alloy. He also fitted up a dual-speed Drivetech 4x4 winch and Rival underbody bash plates.

The nine-inch Perception Lighting LED driving lights help turn night into day, with just enough space left for Jeremy to fit a GME UHF antenna to the front bar on a flip mount. A set of Fatboy rock sliders from Southern Cross Fabworks were also bolted on, but coated with Raptor Liner in Jeremey’s signature orange colour. 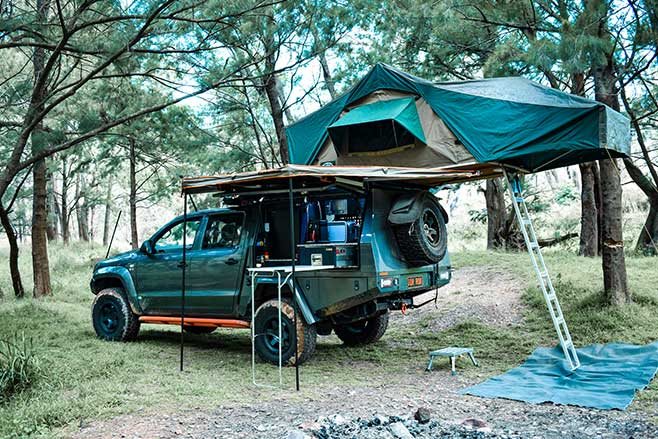 To protect the engine from water and dust ingress, a Safari Armax snorkel has been given the nod and the induction noise through it is simply intoxicating. Air On Board diff breathers have also been installed, for peace of mind when exploring his local Blue Mountains tracks. We put them to the test on this photoshoot, that’s for sure.

To further safeguard the engine, Jeremy installed a Process West catch can and a secondary Fuel Manager diesel pre-filter.

“I consider these modifications as essential for the Amarok,” says Jeremy. “They aren’t terribly expensive when you consider how much a new motor will set you back if things go wrong.”

The key feature of Jeremy’s Amarok is certainly the custom canopy built by MITS Alloy in Newcastle. “Don’t ask for one, as they told me they wouldn’t be interested in making another one like it,” Jeremy says with a grin. 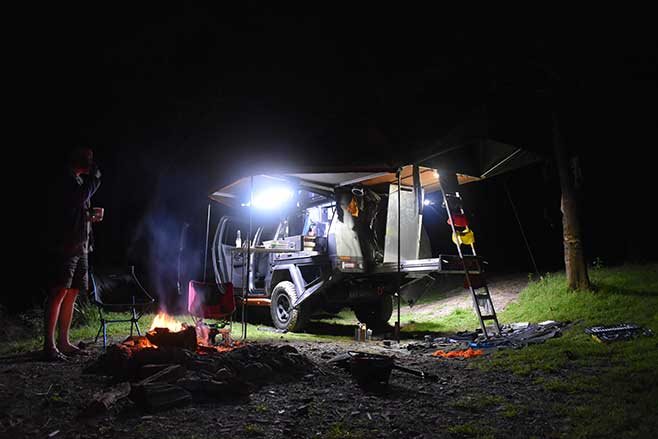 Not only is it a thing of beauty to look at, matching the lines of the Amarok as neatly as possible, but it’s insanely practical as well. Jeremy wanted everything to have its own place but still leave enough room for swags, firewood and other bulky items that get added last minute. It’s not just a tourer, it’s a work vehicle as well at the end of the day.

Storage is handled by a set of RV Storage Solutions drawers, which Jeremy feels are the best in the business. With the height of the canopy, an upright Bushmans fridge sits perfectly on the passenger side, and he has enough space for a second smaller Bushmans fridge on the driver’s side if heading away for an extended fishing trip.

As Jeremy is an agent for CRD Tech custom dyno tuning, his V6 Amarok was always going to have a power increase. Well, after swapping out the turbo multiple times purely to experiment with high-flow options, and spending hours on the dyno getting the tune right, Jeremy is now over the moon with the performance of the Amarok. 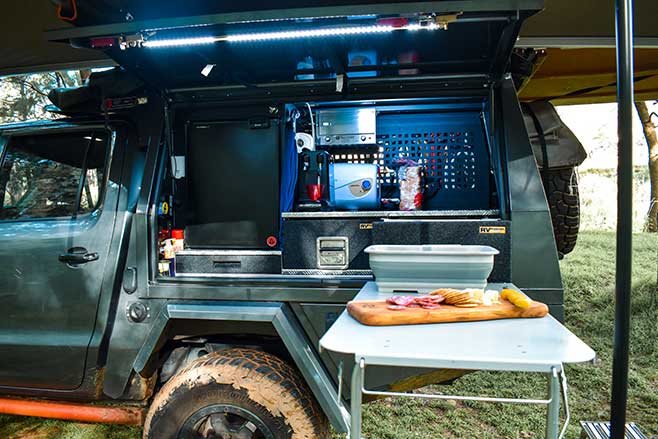 There’s also a PWR intercooler and a three-inch Manta exhaust fitted for further gains, as well as a gearbox tune which changes the shift patterns and helps when trying to reverse in soft sand or when backing up a trailer. And the end result? This Amarok now makes 220kW and 600Nm at all four wheels.

On 34-inch tyres. Now that is impressive! A Wholesale Automatics transmission cooler kit was installed to help keep gearbox temps down around the same time, and Jeremy has seen a massive drop in temps since fitting it, as well as a ScanGauge to monitor vital temperatures.

Being a European vehicle, there was only one option for Jeremy when it came to suspension. He’s installed a suite of Bilstein products sourced from Heasmans Steering in Sydney. B6 Bilstein struts with H&R coils and Hardrace upper control arms get the party started in the front end, with a diff-drop kit from Southern Cross Fabworks installed to keep CV angles within spec.

In the rear end, Jeremy installed a set of Outback Armour constant-load leaf springs, Polyair air bags and the massive (and expensive) Bilstein B60 rear shocks. The reasoning for going with the big shocks in the rear is because this is where most of the weight sits. So far Jeremy says he is wrapped with the performance, and has no plans to change it. 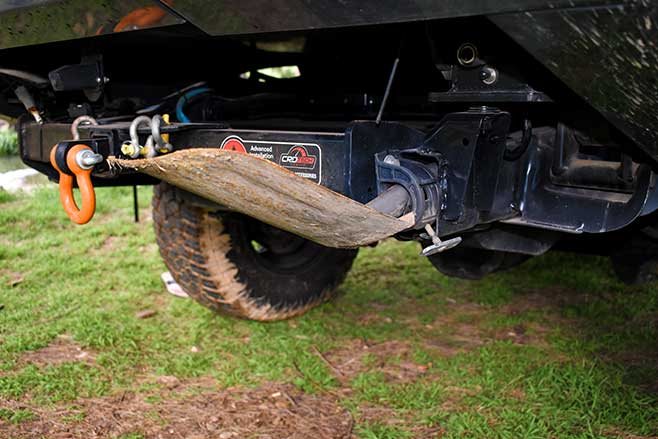 As well as the suspension, Jeremy’s Rok is riding higher on a 43mm body lift kit from Southern Cross Fabworks. Interestingly, the Rival front bar is adjustable to suit the body lift so no additional fabrication was required post body lift, as the rock sliders were made to suit. Good info for anyone at home wanting a high-riding Amarok.

It seems that if you own an Amarok, you have Fuel Vector wheels fitted. And there’s nothing wrong with that. Jeremy wanted to stand out from the crowd though, and decided on a classic-looking set of Rotiform alloy wheels in 17x9 flavour. One of Jeremy’s favourite accessories on Dr Rok are the tyres. He’s running the new Yokohama X-AT all terrain tyres in 295x70R17 or 34-inch diameter in the old money. “They get the power to the ground, don’t feel sketchy in the wet and work well off road,” Jeremy mentions.

By trade, Jeremy is an auto electrician, so naturally the 12V setup in his Amarok was going to be pretty wild. The whole box-and-dice is controlled by a Redarc RedVision system, which allows all 12V accessories to be accessed from one touchscreen or by using the app on his phone. No custom 4x4 is complete these days unless it has the all the niceties of home. So, you guessed it, there’s a pie oven and coffee machine, as well as an electric hot-water system with shower hose (Jeremy isn’t a fan of carrying gas).

It seems you can have your cake and eat it too, if you put in the ground work. Jeremy has created a 4x4 that is comfortable, powerful and capable. And yes, it’s been reliable too. But if you reckon you have a more modified VW Amarok, we’d certainly love to see it. 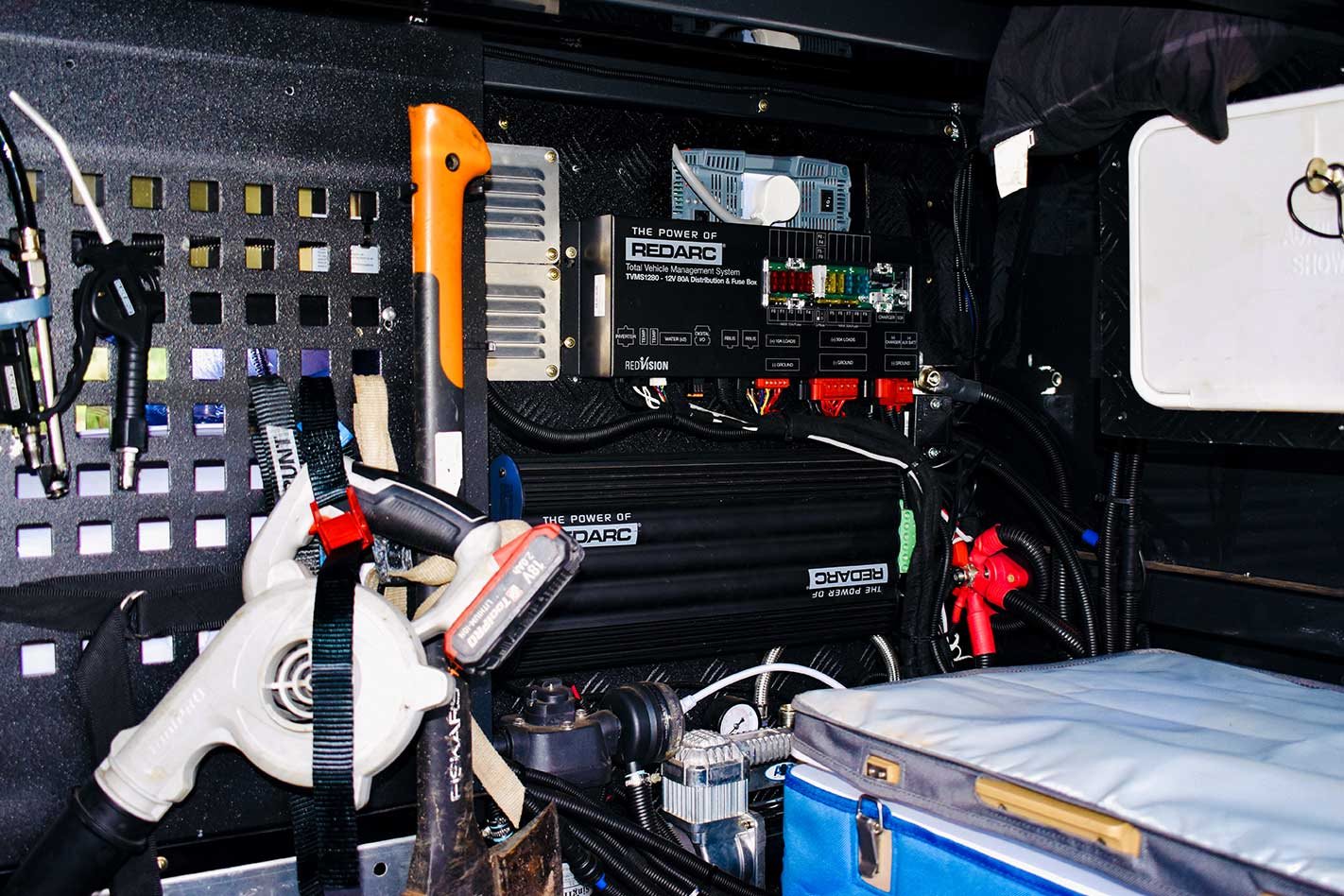 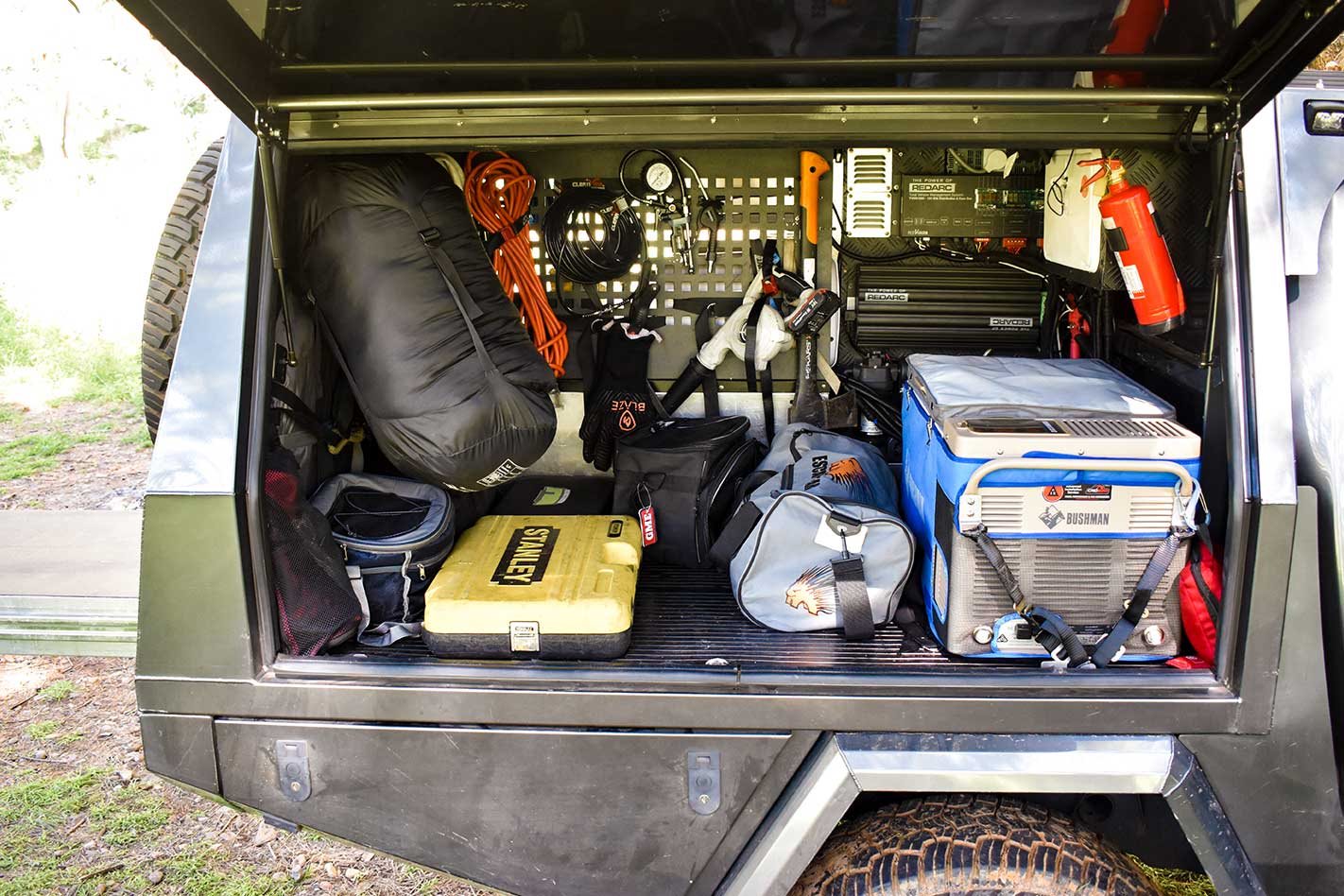 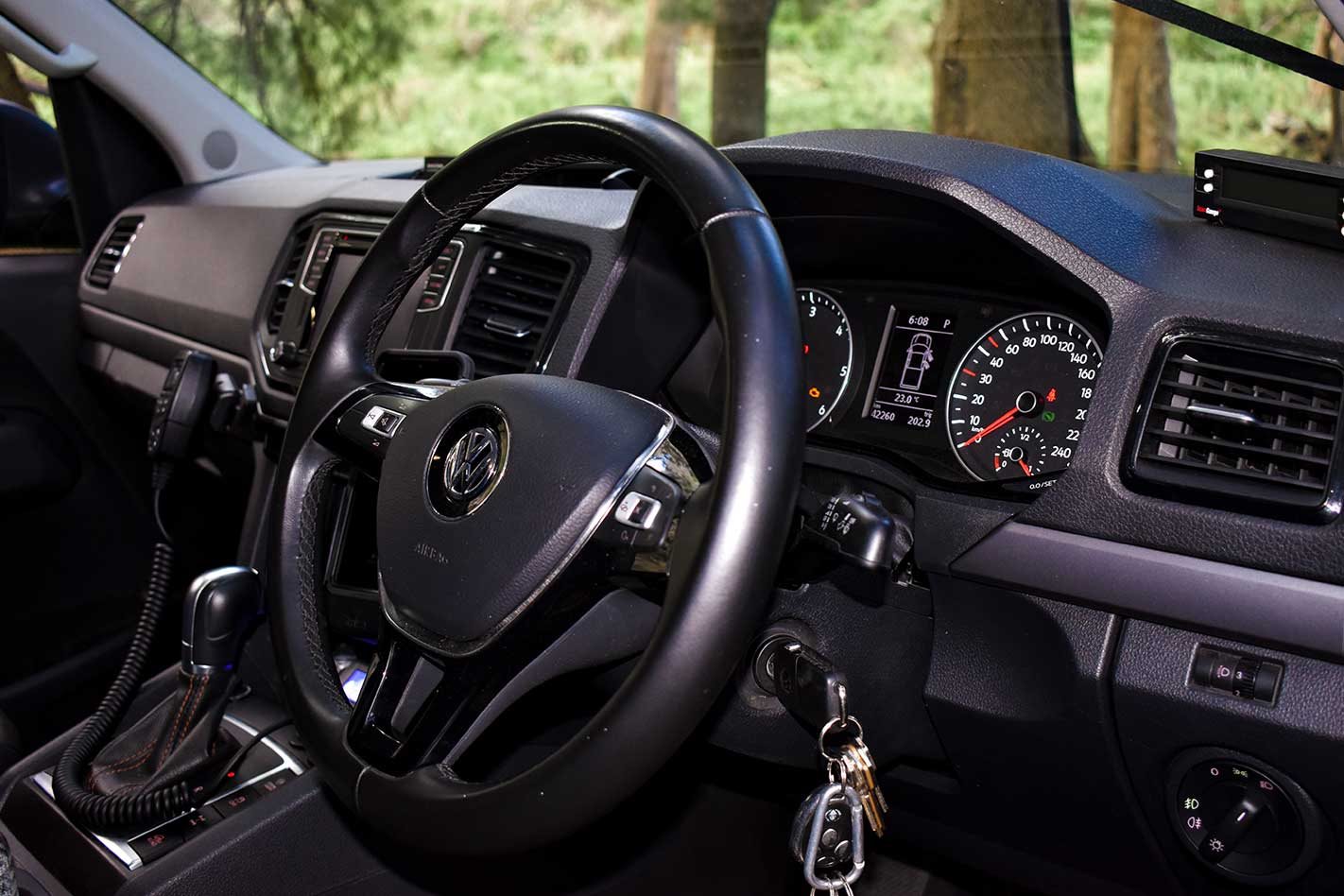 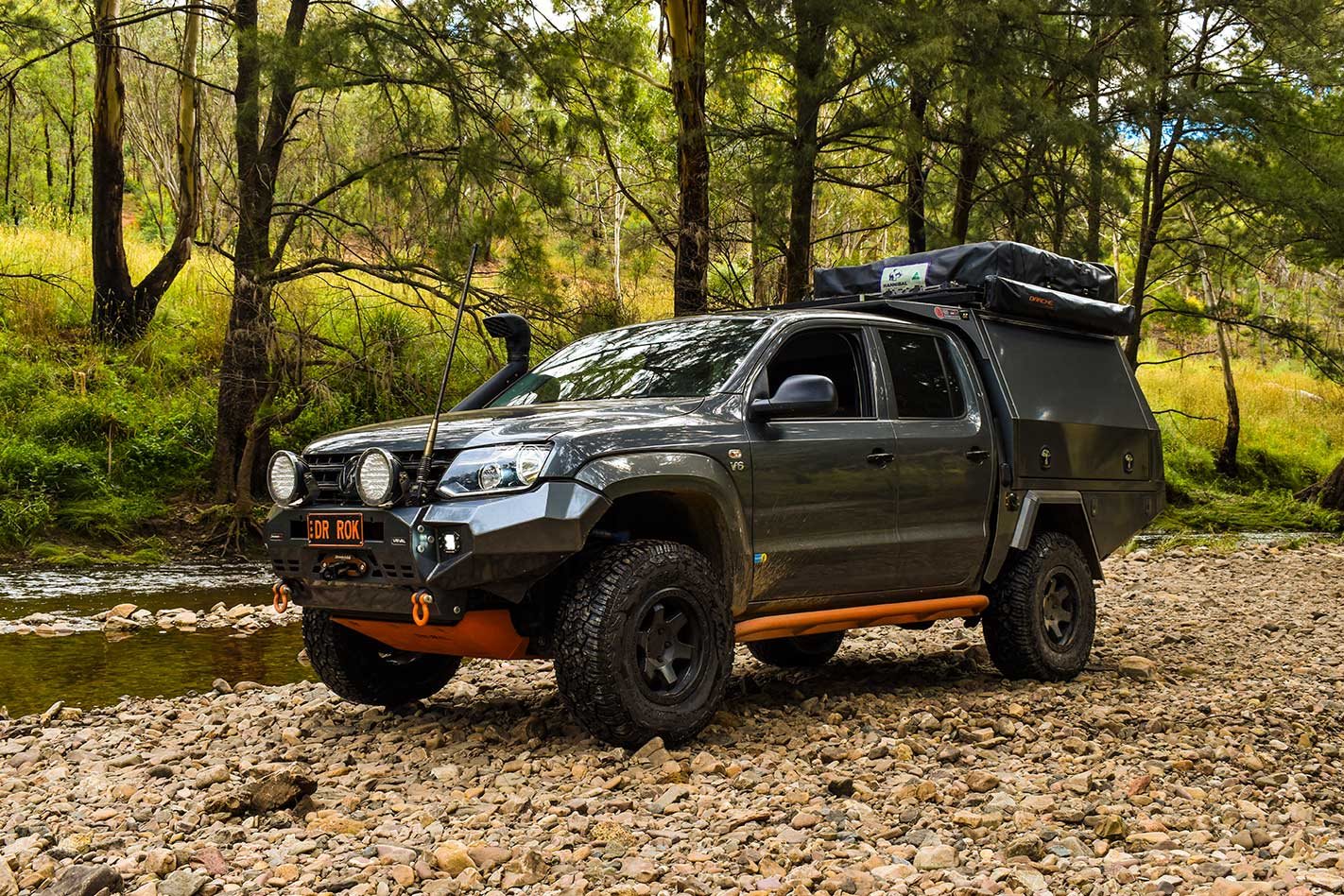 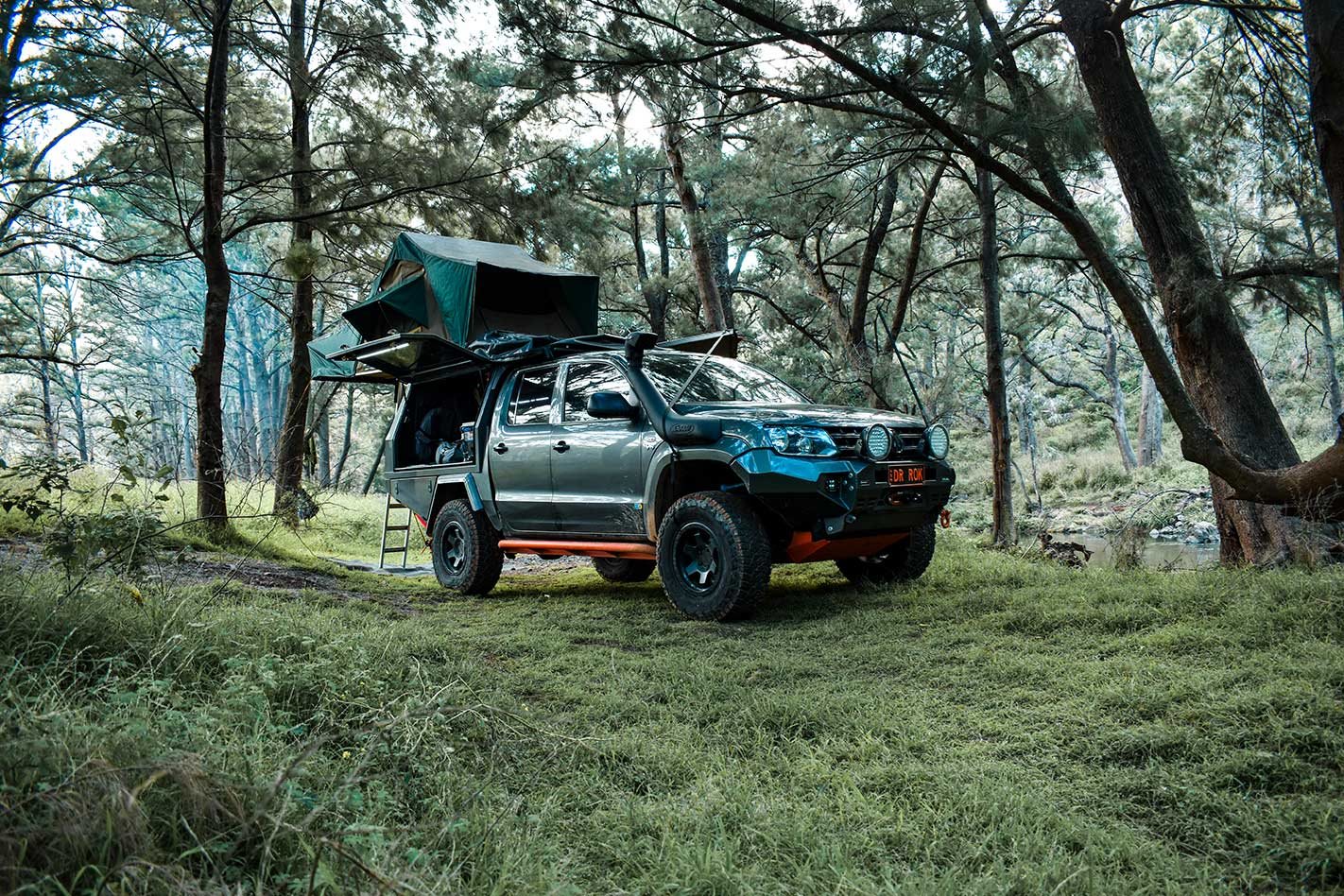 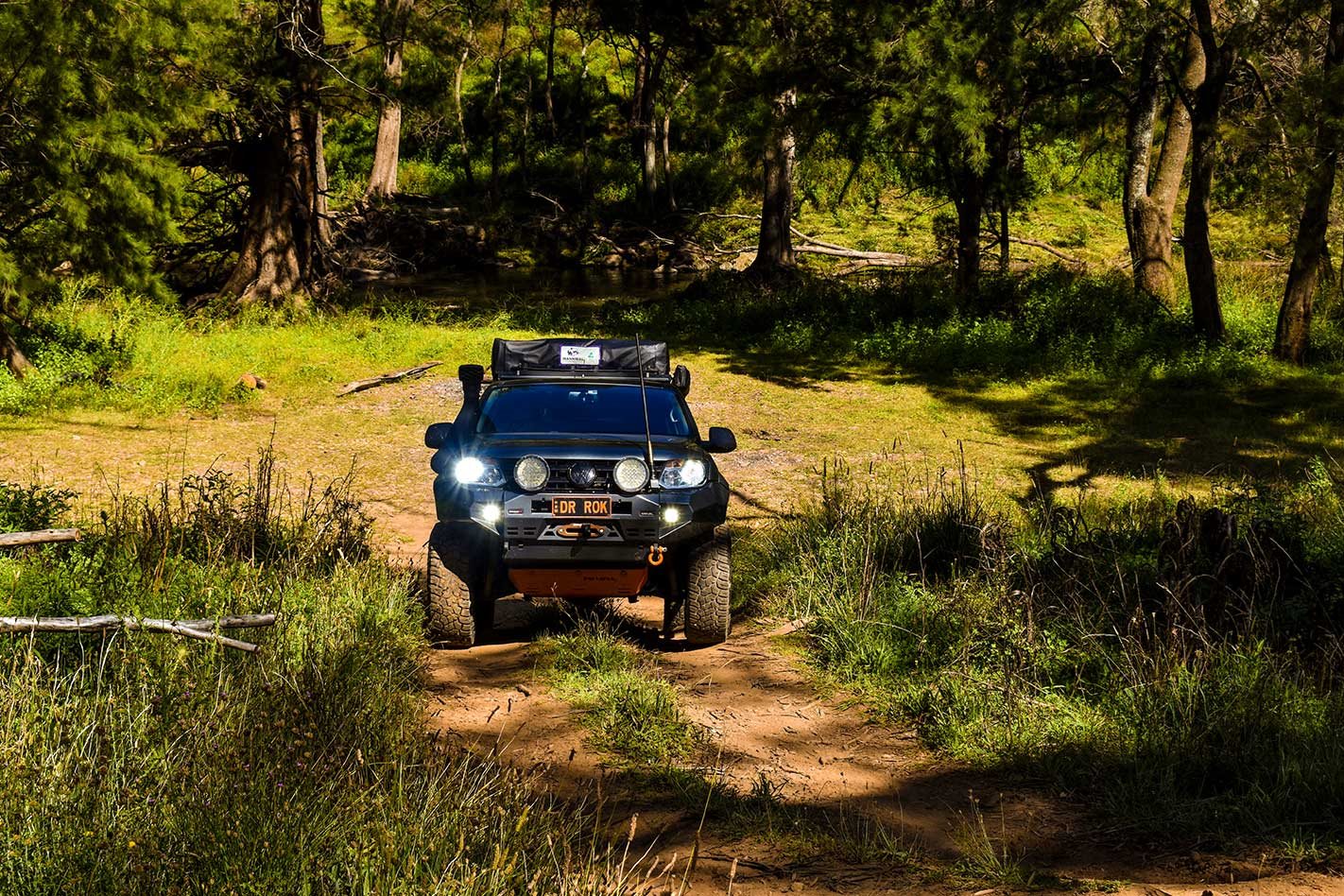