"THEY don’t make them like they used to.” It’s a phrase repeated day after day, year after year, through countless country pubs, 4x4 workshops, and the comments section every time we post a review of a new 4x4. People gripe about the youth of today, the vehicles and the music, and why all three were better back in the day.

But the future ain’t all doom and gloom, especially if Perth-based 20-year-old Sivan is anything to go by. On any given weekend you won’t find Sivan strapped to YouTube or tweeting his life away; he’ll be out in the hills, exploring the best parts of Australia’s West Coast in one of the neatest 60 Series LandCruisers we’ve seen in the past 30 years.

"I was originally looking for a 105 or 80,” Sivan told us. “Eventually I found the 60 and just loved the old-school design.” 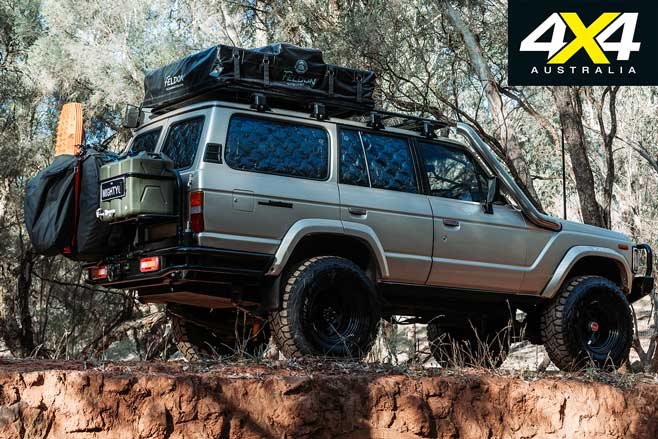 Despite being commonly mistaken for a 61 or 62 due to the rectangle headlights, it’s actually a clean-as-a-whistle HJ60 complete with a pushrod non-turbo 4.0-litre diesel under the bonnet. From here, Sivan tweaked and tuned the oil-burner to make it far more liveable with the higher speeds of the new millennium.

Starting from the intake there’s now a four-inch straight shot into the engine bay, thanks to the one-off stainless-steel snorkel handbuilt by the guys at Craftsmen Metal Works. At the business end you’ll find none other than a CT26 turbo, donated to the build from a later model factory turbo-diesel LC80. It’s pumping a respectable 15psi out the other end, before a monster 600x300 top-mount intercooler reigns in the intake temperatures.

The Holden Colorado bonnet scoop is the only external clue of the significant power upgrades to the old girl. Spent exhaust gases make their way rearwards through a three-inch turbo-back exhaust system, and a heavy-duty clutch mates the whole lot up to the OEM five-speed cog-swapper. 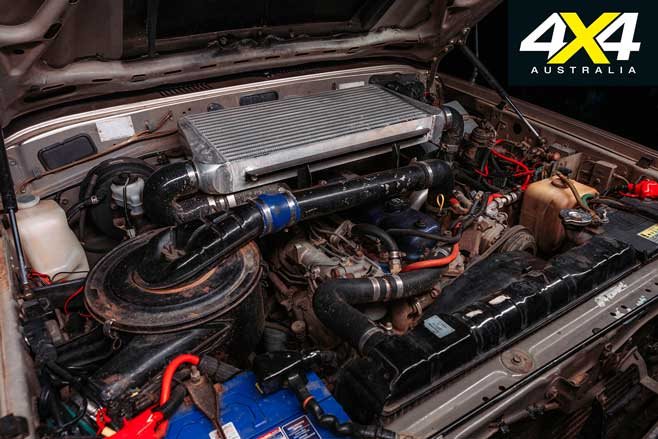 Sivan’s ’Cruiser earns its aggressive stance thanks to a combination of suspension tweaks and a body lift. Up front, the live axle is held in place by a pair of heavy-duty Pedders leaf springs. They’re raised two inches over stock and rated for the additional weight of the diesel, nearly 60kg heavier than the petrol offerings. In the rear, two-inch-lifted Dobinson leaf springs are rated at 300kg constant load to cope with the extensive camping setup, while an Airbag Man load-carrying setup helps to level the load when towing.

Dobinsons got the nod again when it came time to get the whole show in order, with its twin-tube big-bore nitro gas shocks finding a home at each corner. They’re paired with new shackles, bushes and a return-to-centre steering damper. 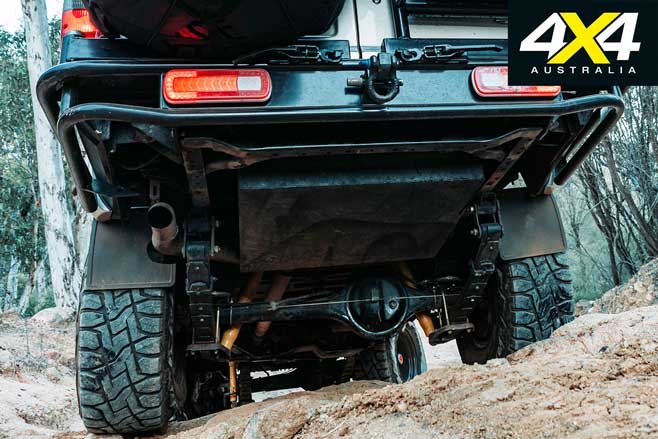 For those doing maths at home, that’s still only a two-inch lift over stock. The remaining two inches of vertical growth comes from body lift blocks pushing the cab higher than the frame, freeing up valuable real estate in the wheel arches.

While the ’Cruiser might look as clean as a whistle, it’s no mall crawler. Shoved in to each corner are massive (for a 60) 315/75 R16 Toyo Open Country R/Ts. That’s a little less than 35 inches in the old money. The aggressive rugged-terrains straddle the divide between M/Ts and A/Ts (see breakout below).

The meaty rubber is wrapped around 16x10 steel wheels, with a -44 offset punching the 60s track width out nearly four inches over stock. Ensuring all four tyres get equal drive when the stubby lever gets pushed into low range are a pair of locking diff centres. Up front, a Harrop ELocker provides positive drive with the flick of a switch, while at the back an air locker from TRE keeps Sivan moving when the going gets tough. 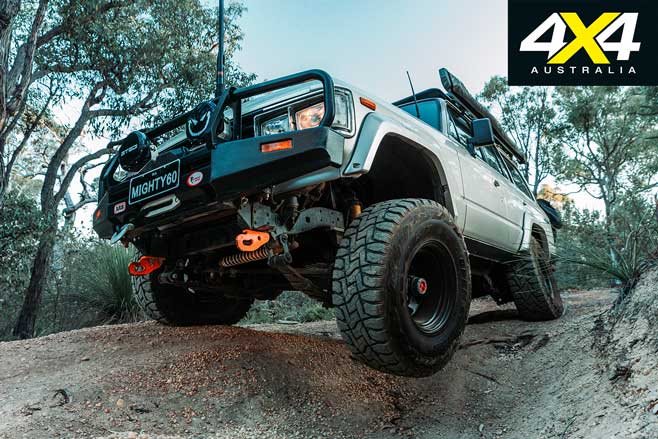 Keeping the 60 in one piece on tough tracks and giving it that unique look is some seriously cool bar work at both ends. Up front, Sivan’s gone for a retro-styled ARB ‘Dakar’ winch bar, which not only provides a decent approach angle off-road but incorporates serious radiator and headlight protection. Sivan also mixed old and new by slotting in a set of high-powered 8.5-inch Stedi Type-X LED driving lights in the bar. Beneath them lies a Domin8r X 12V winch.

Moving rearwards and the ’Cruiser cops a dose of custom. The normally vulnerable quarter panels are now the strongest part of the rig. The custom tube bar armours up the rear-end and provides a mounting point for dual swing-out carriers; plus it mounts 66 litres of water storage, with three jerry cans on the driver’s side. The passenger side swing-out houses the spare tyre, MaxTrax and a canvas trash bag. Road Vision’s sequential tail-lights have been built in, a vast improvement over the stock offerings. 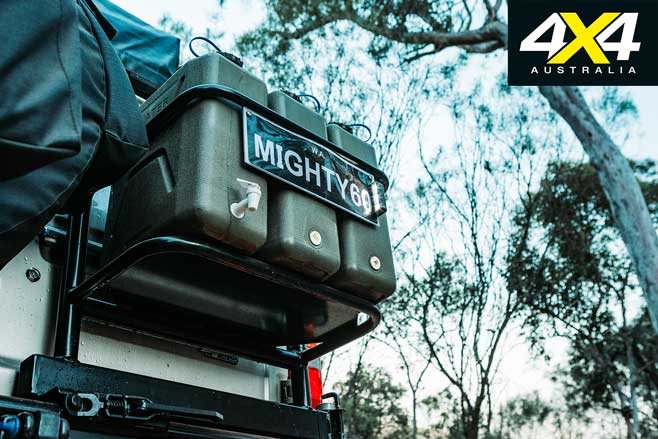 Swinging open the rear bar reveals a seriously impressive camping setup. The first thing you’ll notice is the twin-drawer system and Dometic CFX-50 fridge/freezer on the tilt-down slide, but that’s just the start. Sivan has customised both barn-door internal door cards. On the driver’s side a drop-down table gives a hand-prep area for meals, while the passenger side incorporates recesses for everything from barbecue tongs to spices and cutlery, all within arm’s length. Underneath there’s a trick triple-battery setup ensuring Sivan is never left wanting.

The start battery takes care of starting and winching, a second battery runs all camp lighting and the sound system, while a 120amp/h AGM battery right up the back keeps the fridge and inverter running. The whole affair is powered by a Redarc 50amp BCDC charger, with a 200W solar panel on the roof keeping it topped up. Insulation panels from Solarscreen keep internal temps down, while a full steel rack houses the Foxwing 270-degree awning and a Feldon Shelter Crow’s Nest rooftop tent. 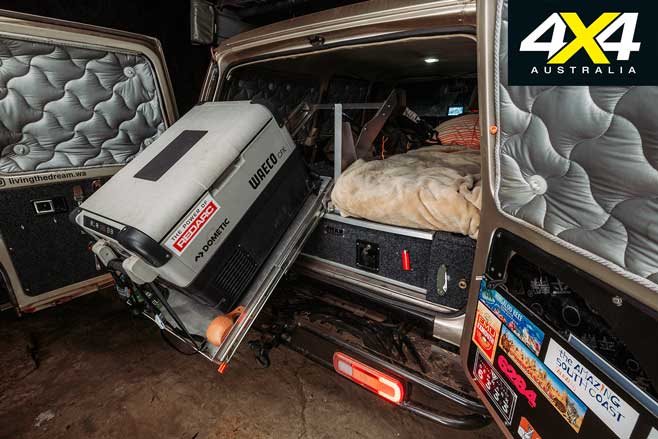 Sivan also fully overhauled the interior. Smart tech comes in the form of GME’s XRS Connect UHF and a Hema HX1 GPS, while a full interior swap has netted a pair of factory turbo bucket seats and a Deluxe centre console. He home-brewed a false floor in the back, replaced the back seats and opened up storage for bulky items, making for one serious usable setup.

They might not make them like they used to; but if the new way of doing things means taking to the hills in classic 4x4s packed full of DIY modifications, maybe that’s not such a bad thing. 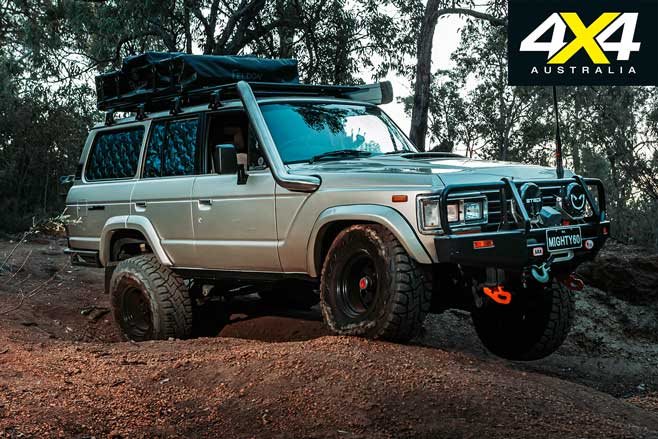 YOU MIGHT be staring at the meaty rubber beneath Sivan’s ’Cruiser, trying to work out if they’re an all-terrain or a mud-terrain. Well, they’re kinda both. You see, 4x4ing isn’t as simple as mud trucks or big trips anymore. People want their cake, and want to take it on a 5000km outback road trip too. It’s brought about a revolution of ‘hybrid’ tyres, something that falls between a mud- and all-terrain tyre.

They’re typically based on the same carcass as their M/T brethren, with a slightly less aggressive tread pattern, more focused on-road noise, and improved handling and braking rather than outright traction off-road. If you live in a mud pit they might not be your first choice, but if you’re doing a combination of touring, daily driving and mild wheeling they’re well worth a look. 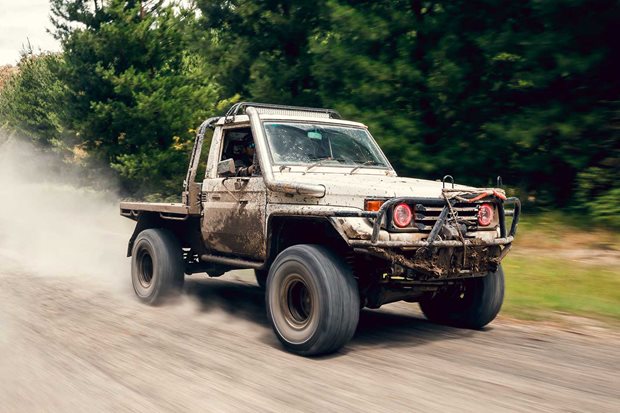 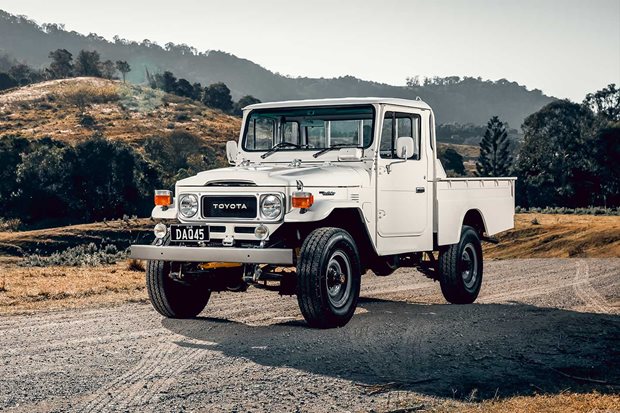 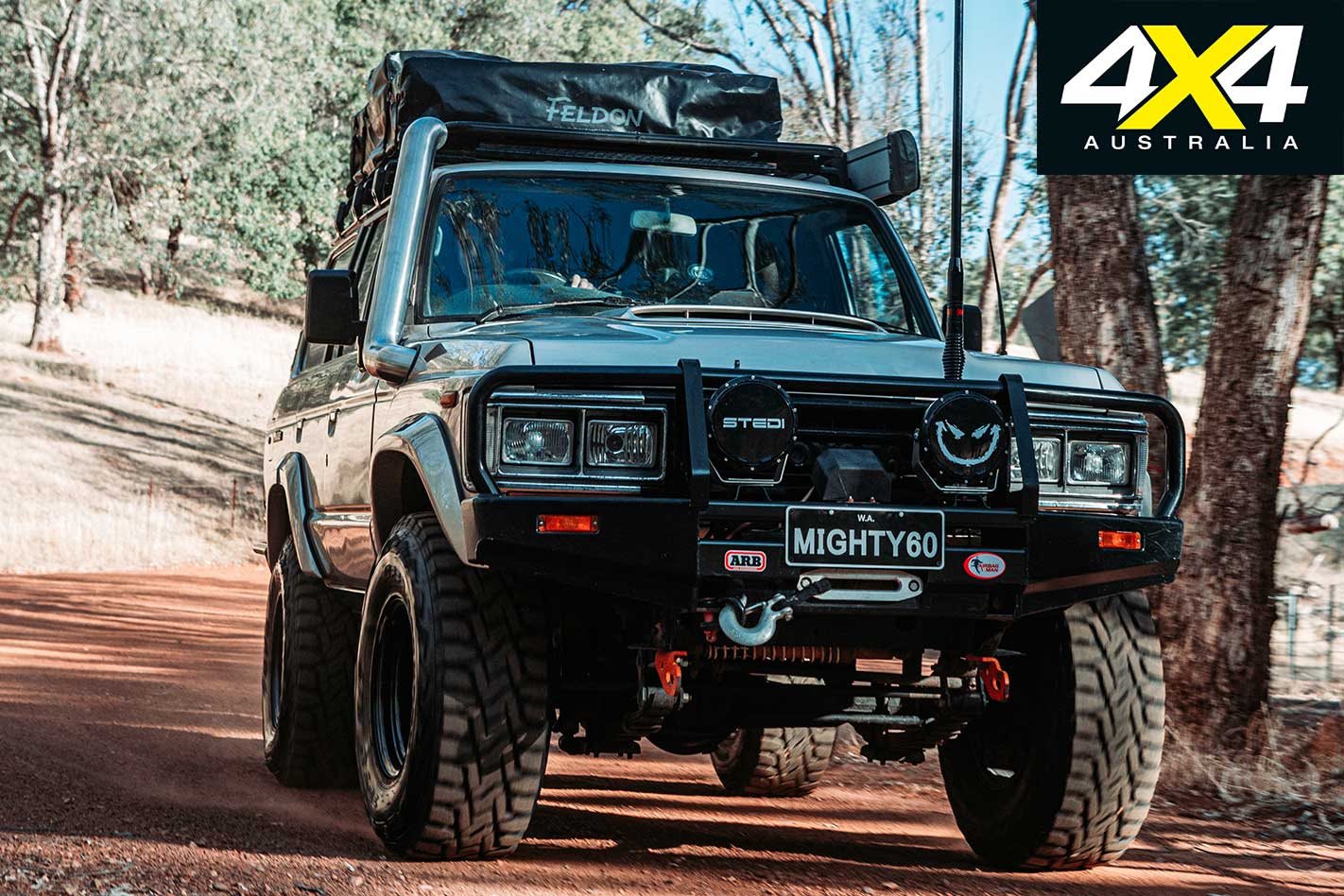 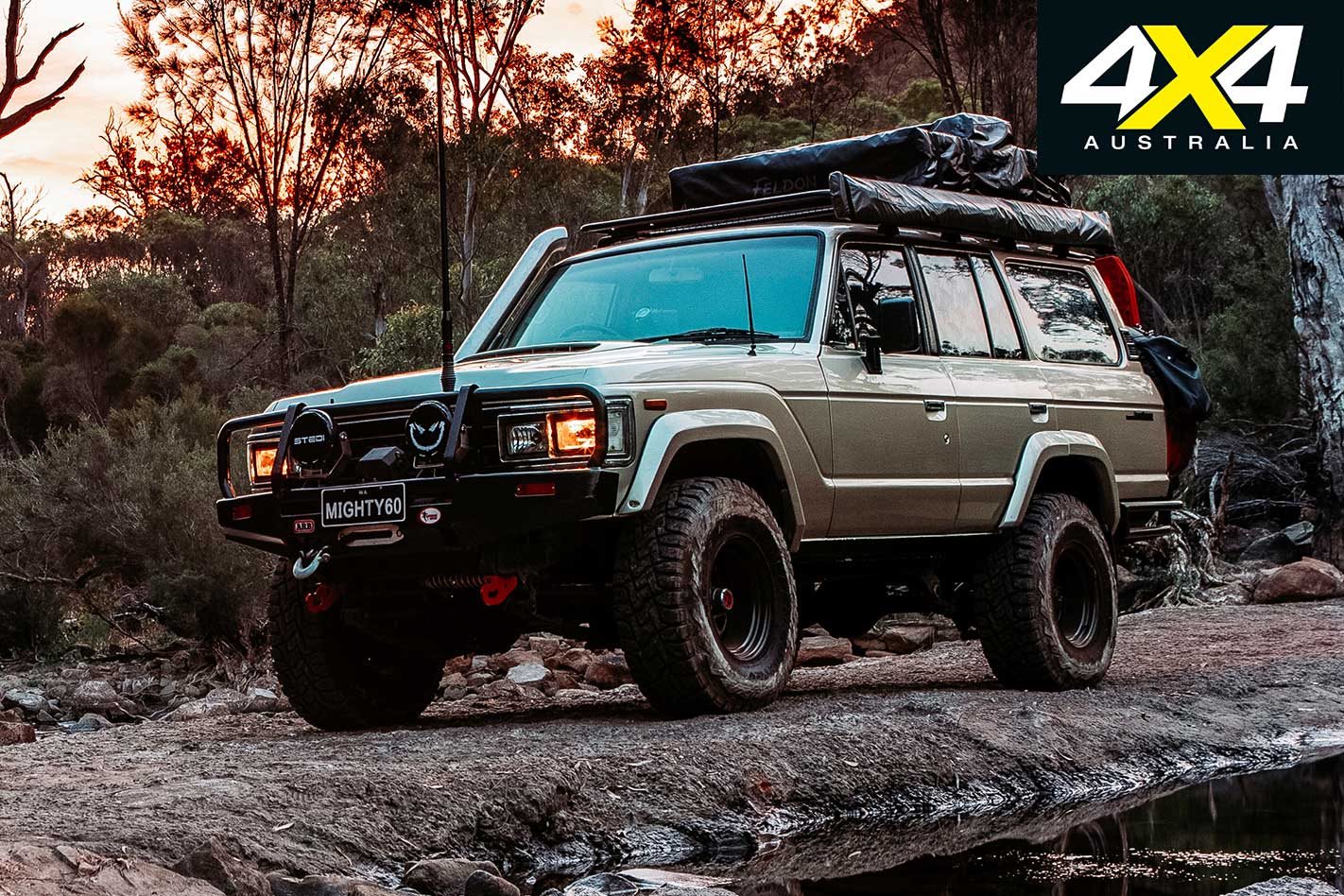 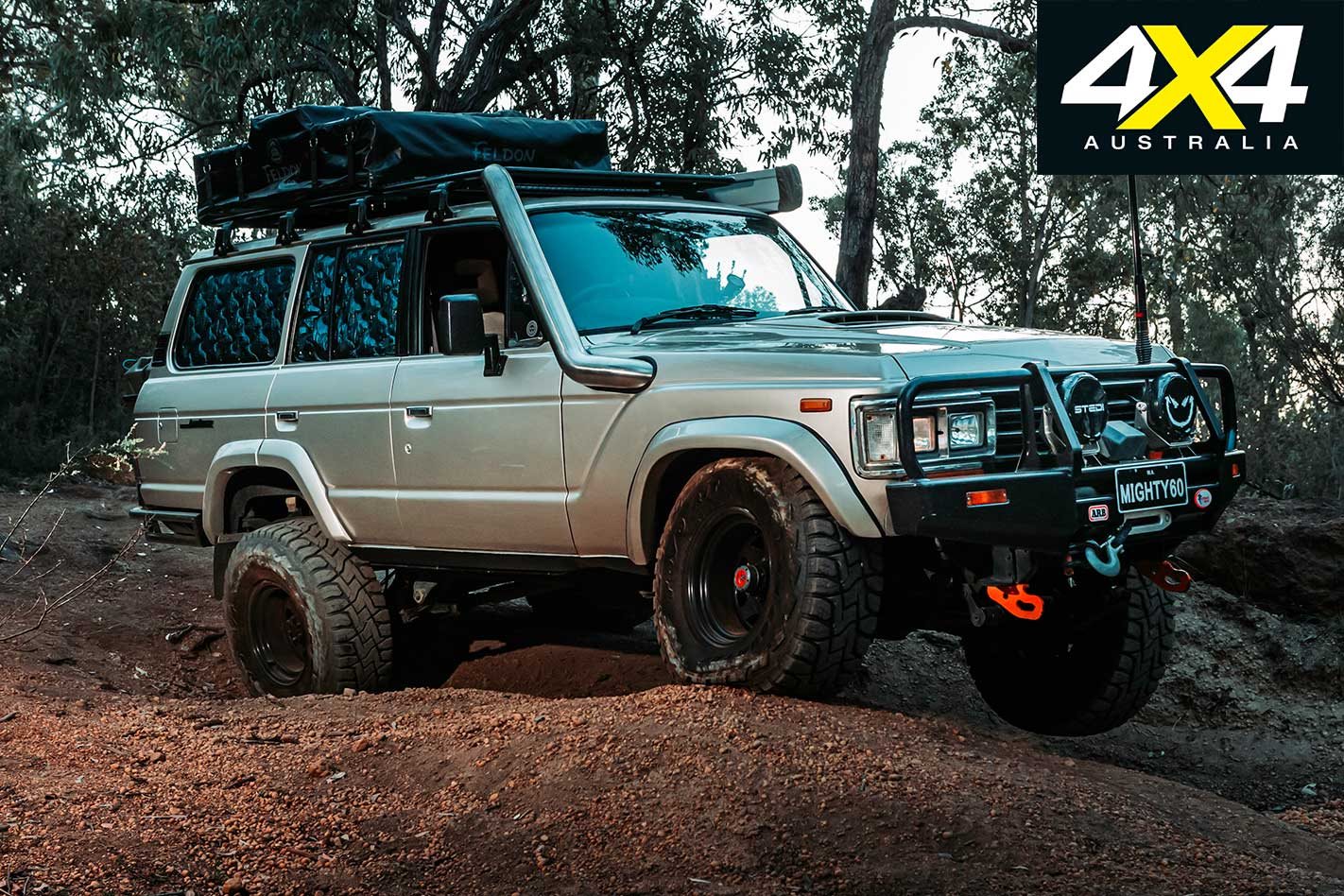 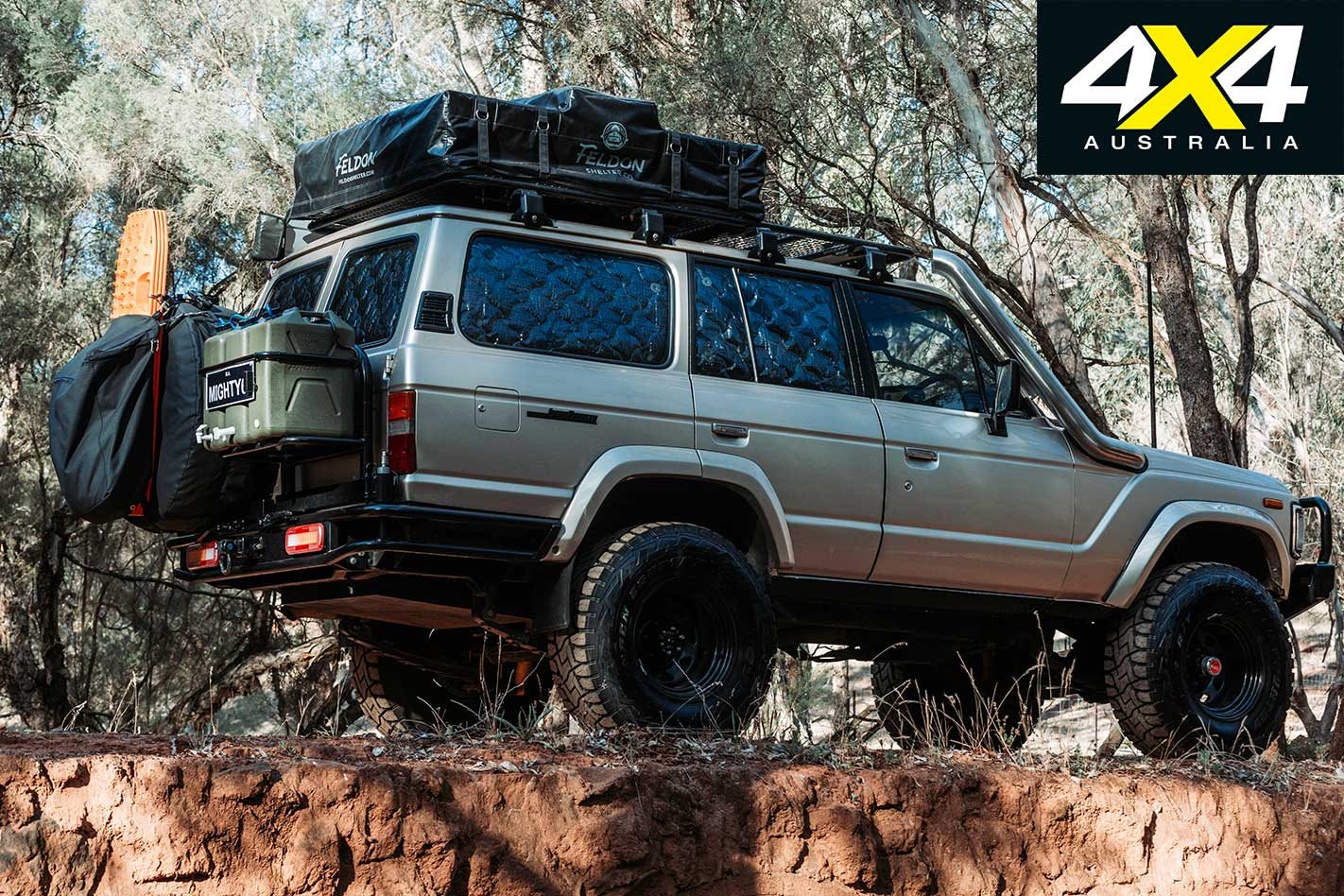 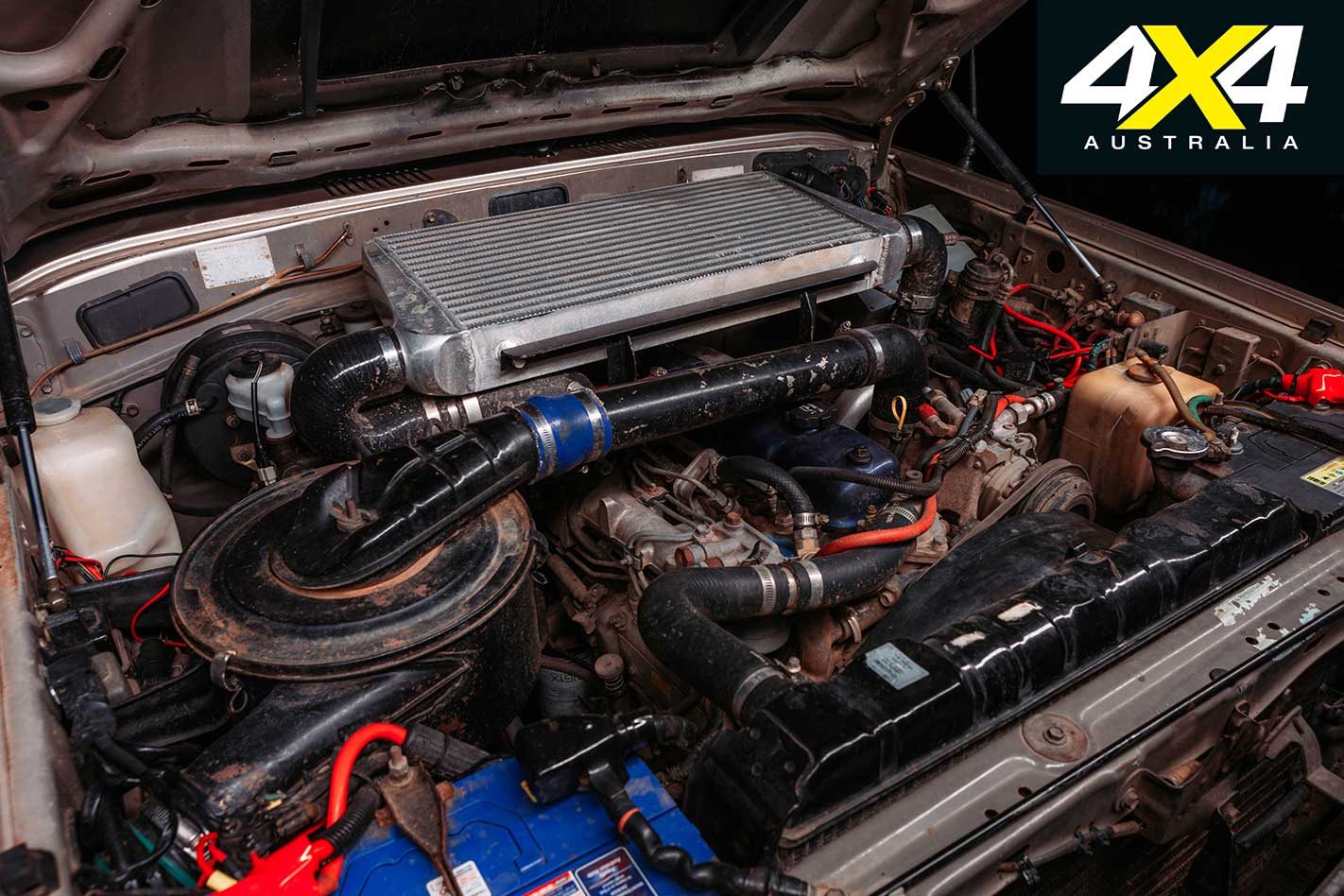 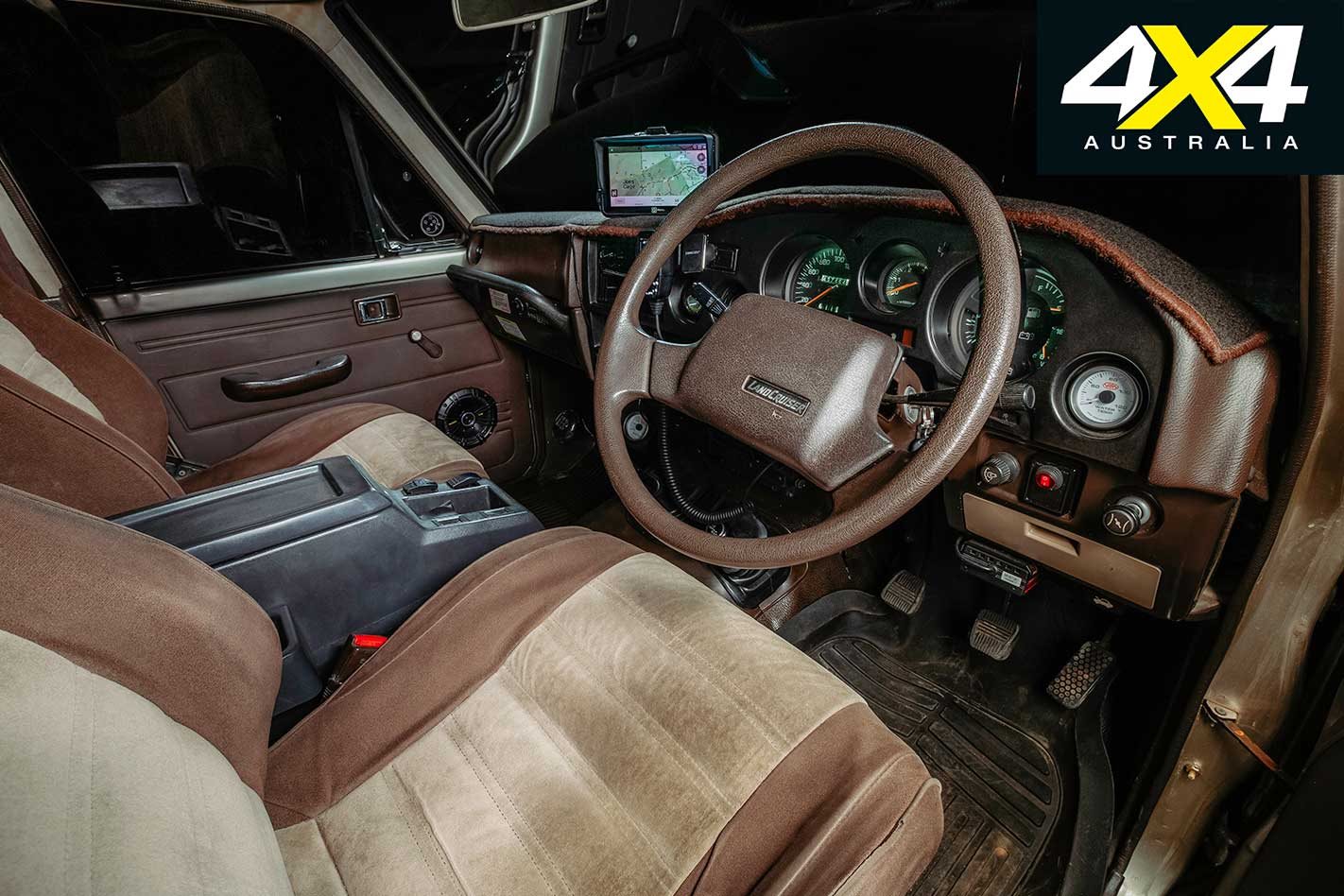 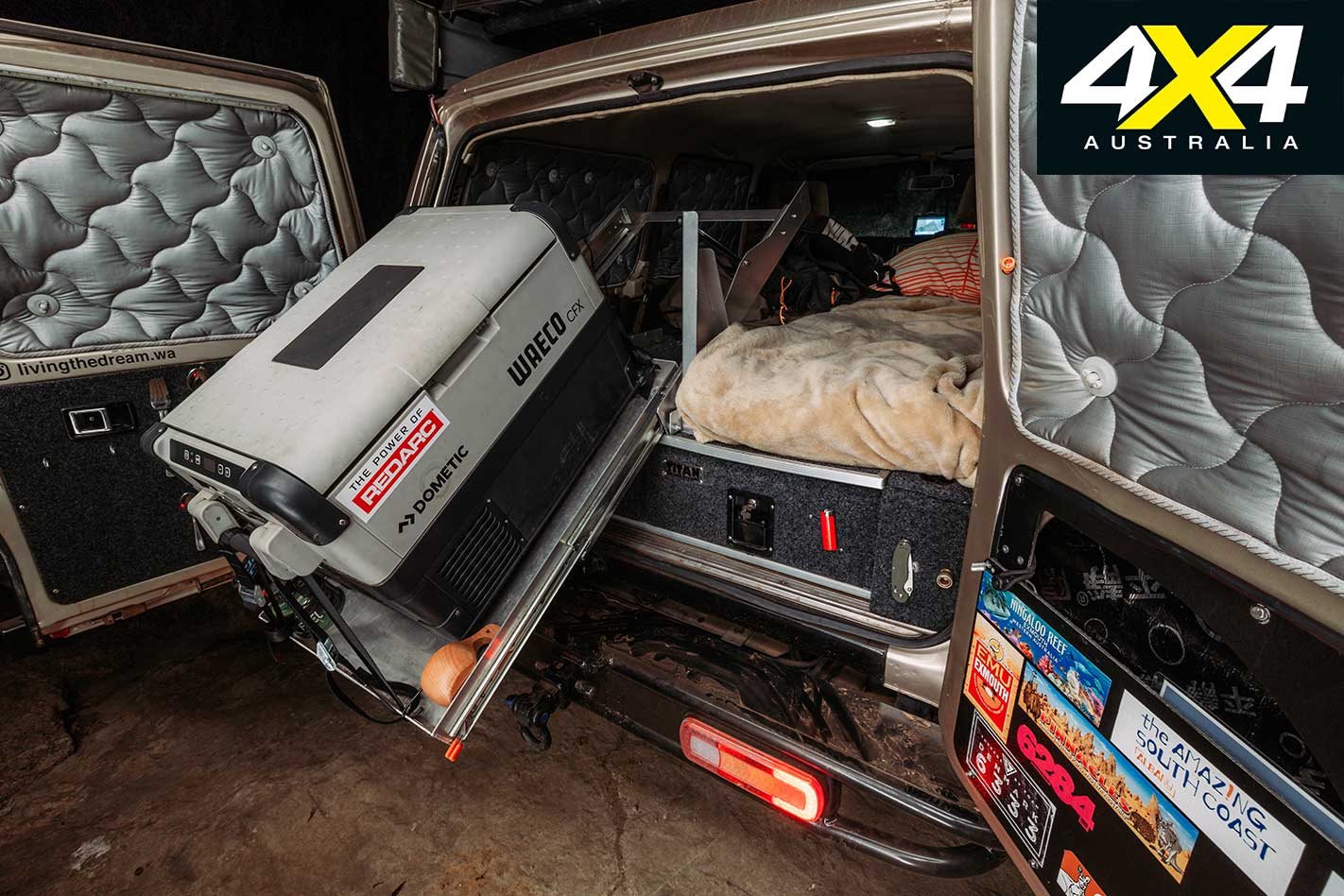 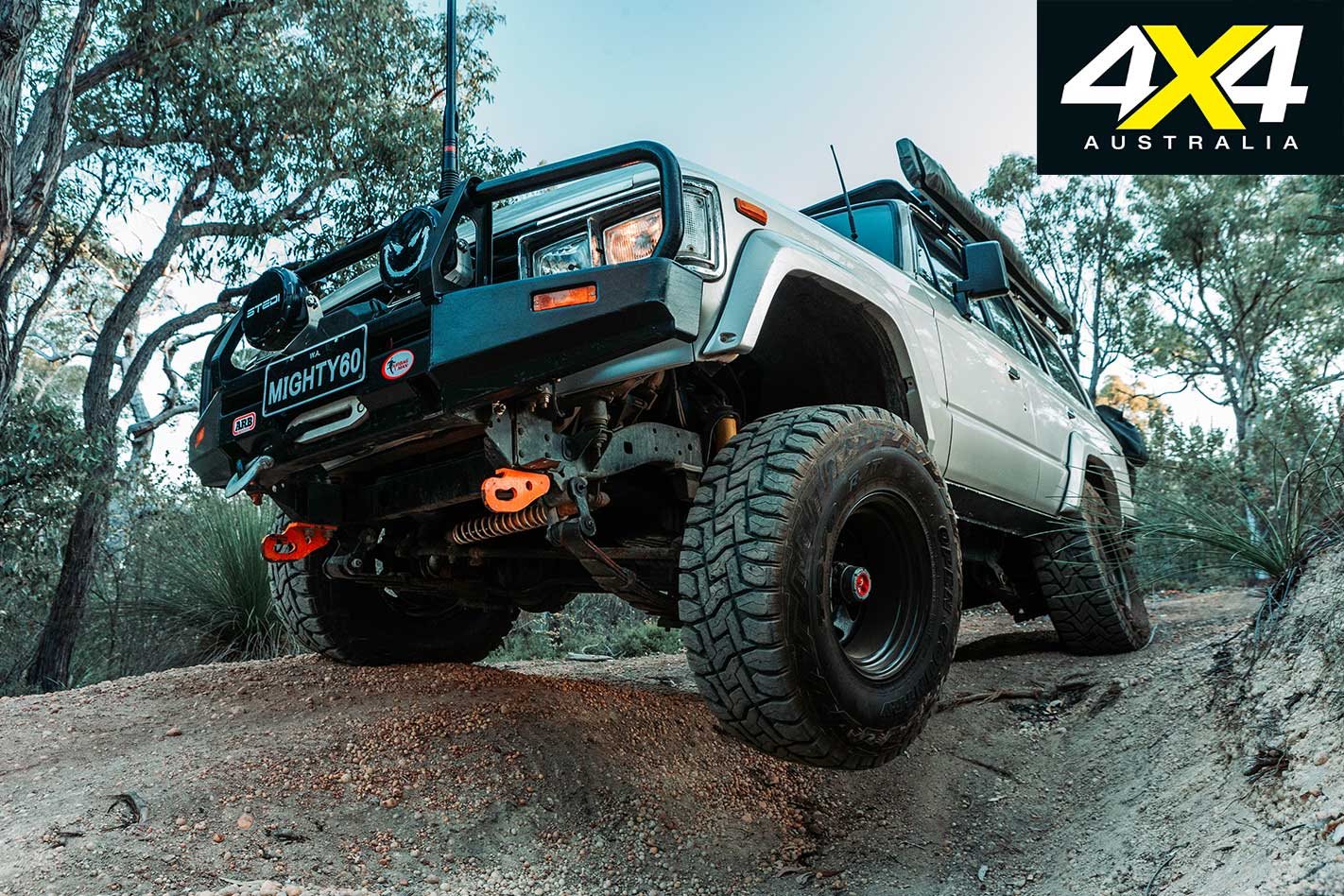 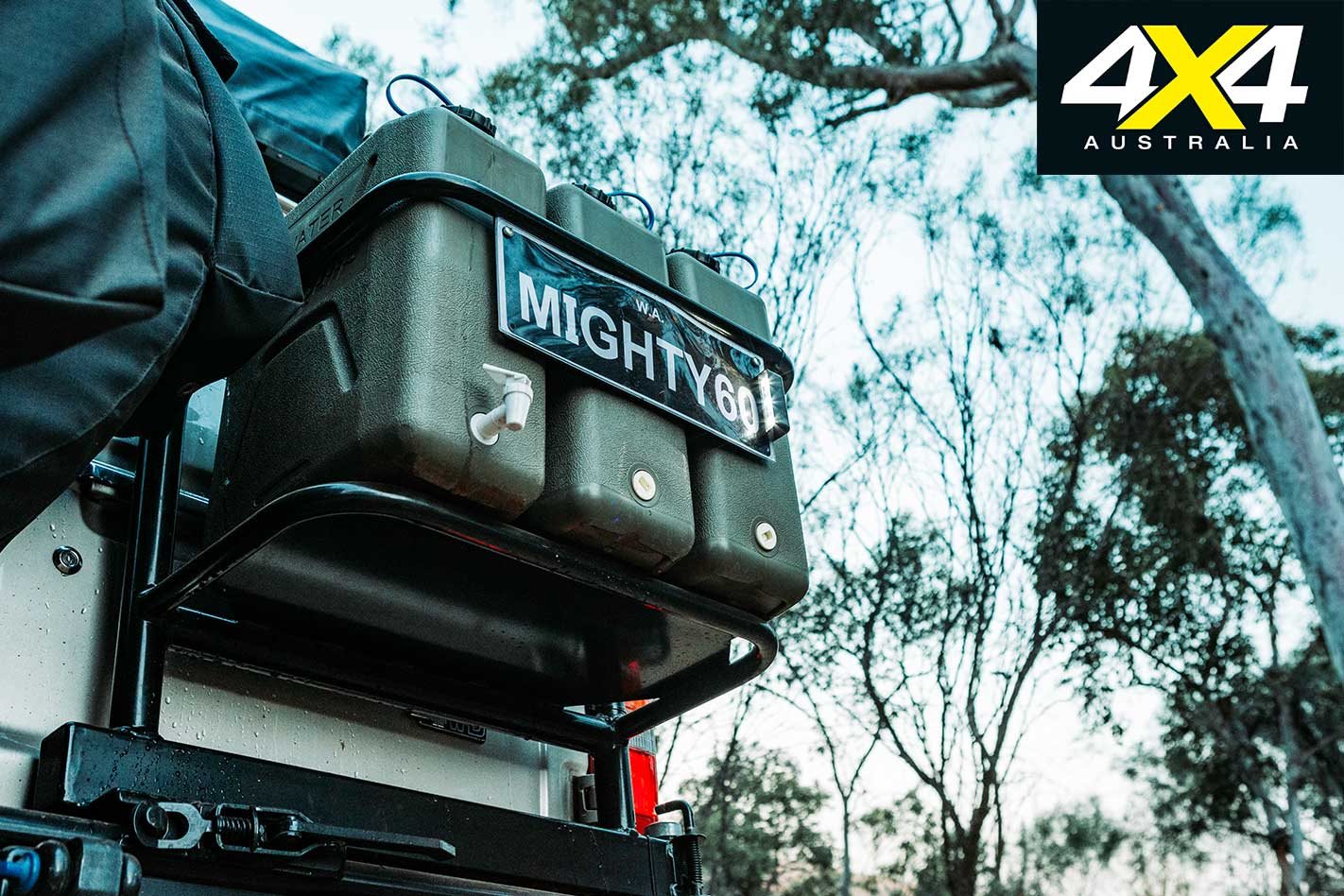