If you’re one of the thousands of Australians now driving a mid-size SUV, there’s a good chance you’re in a Mazda CX-5.

The first generation has been so popular out here that Aussie feedback played a significant role in the development of the second-generation CX-5.

The new CX-5 is an evolutionary step change that promises to sort out the few bugbears of the original while building on its successful formula to stay ahead of key rivals like the Volkswagen Tiguan, Kia Sportage, Subaru Forester and Ford Escape.

In terms of spec changes, the new CX-5 is quite familiar. Its basic platform is the mostly the same as before, though the body is slightly lower and longer, and there are the same three engines to choose from; a 2.0-litre petrol four, a 2.5-litre petrol four and a 2.2-litre turbodiesel four, which is what we’re driving today. Power for the petrols is 114kW and 140kW, with torque outputs of 200Nm and 251Nm. The diesel manages 129kW and 420Nm, which is solid for this class. As for gearboxes, a six-speed auto is standard everywhere except the entry level CX-5 Maxx, which is the only one to offer the choice of a six-speed manual. The smaller 2.0-litre petrol engine is also the only one available in front-wheel drive. Both of the larger engines are all-wheel drive only and available across a wide spread of trim levels.

What is new is a fifth model grade called Touring that sits in the middle of the line-up between the Maxx Sport and the GT. That means more choice for buyers, which is a real Mazda strength, and ultimately equals better value. Pricing for the new CX-5 is almost the same as the previous generation with slight increases of less than a thousand dollars across the range, which Mazda has justified with higher levels of standard equipment. At launch the CX-5 starts from a little over $28-grand, up to almost $50K for the top spec diesel.

What’s most significant about this new-gen car is the work Mazda’s engineers have put in on the stuff you can’t see. Noise, vibrations and harshness improvements were a primary focus during the second-gen CX-5’s development and this cabin is now much quieter inside, which was a problem with the old car. 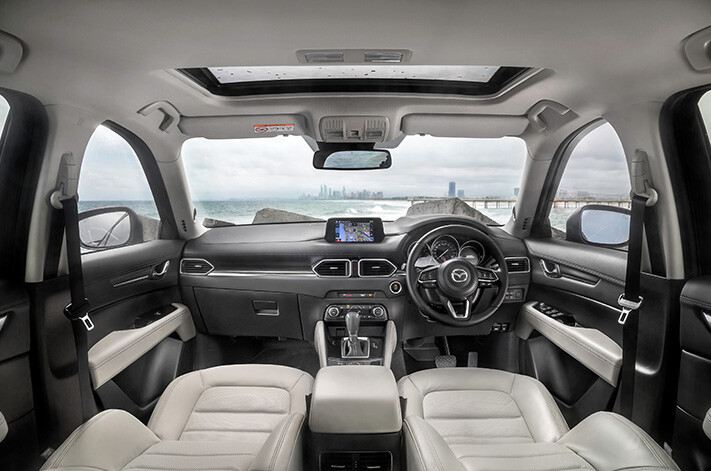 Safety has been another obvious priority with all models scoring upgraded blind spot monitoring and auto emergency braking that now works up to 80km/h, even in reverse.

From the outside there are obvious design elements woven in from Mazda’s other successful SUVs, the CX-9 and CX-3. Mazda says the styling approach is more mature, and though the middle of the car is basically unchanged, lower profile lights at the front and rear, a new tailgate and a bigger front grille do add appeal and just enough difference to separate this CX-5 from the old one.

Where Mazda hasn’t held back is inside. The experience of this cabin is noticeably more upmarket. A complete interior overhaul has brought in a beautiful new dashboard and more premium finishes, plus better ergonomics than before, particularly in the back. Rear seating offers increased visibility and more room, with a lower seat cushion making it more comfortable for kids, and rear air vents now standard in every model grade except the base Maxx.

Making the CX-5 quieter has added up to 40kg of extra weight, though that has had only a minor negative impact on the CX-5’s sporty attitude, leaving its driving experience as a plus in our books.

Those confident road manners are helped by the compliance of the CX-5’s ride, though it is a little harsher on the larger 19-inch wheel packages of the up-spec models like this one, as opposed to the 17s down the range.

Minor engine revisions have also improved refinement levels, particularly for the diesel, though the base 2.0-litre petrol is still noisy and lacking in mid-range shove. That engine won’t be nearly as popular as the larger petrol, which doesn’t suffer from the same issues.

Mazda has addressed key criticisms of the old CX-5, while preserving the things we liked most about the original car. Other contenders in this segment are increasingly competent, but this new CX-5 has what it takes to hold its own against class benchmarks like the Volkswagen Tiguan, and could just do enough to defend its position as Australia’s most popular mid-size SUV.

Genesis reveals its sporty-looking new mid-sized wagon, and while an Australian debut is confirmed, we can thank Europe for its existence