With no ABS, no traction control, about a billion horsepower and my own feeble, bordering on non-existant drifting skills, my imagination assured me I was definitely going to crash this one-off, purpose-built Toyota 86 drift car.

And matters were not helped by the thought that it not only belongs to Australian drift royalty and three-time champ Beau Yates, but that so much of the build itself was done with his very own hands. 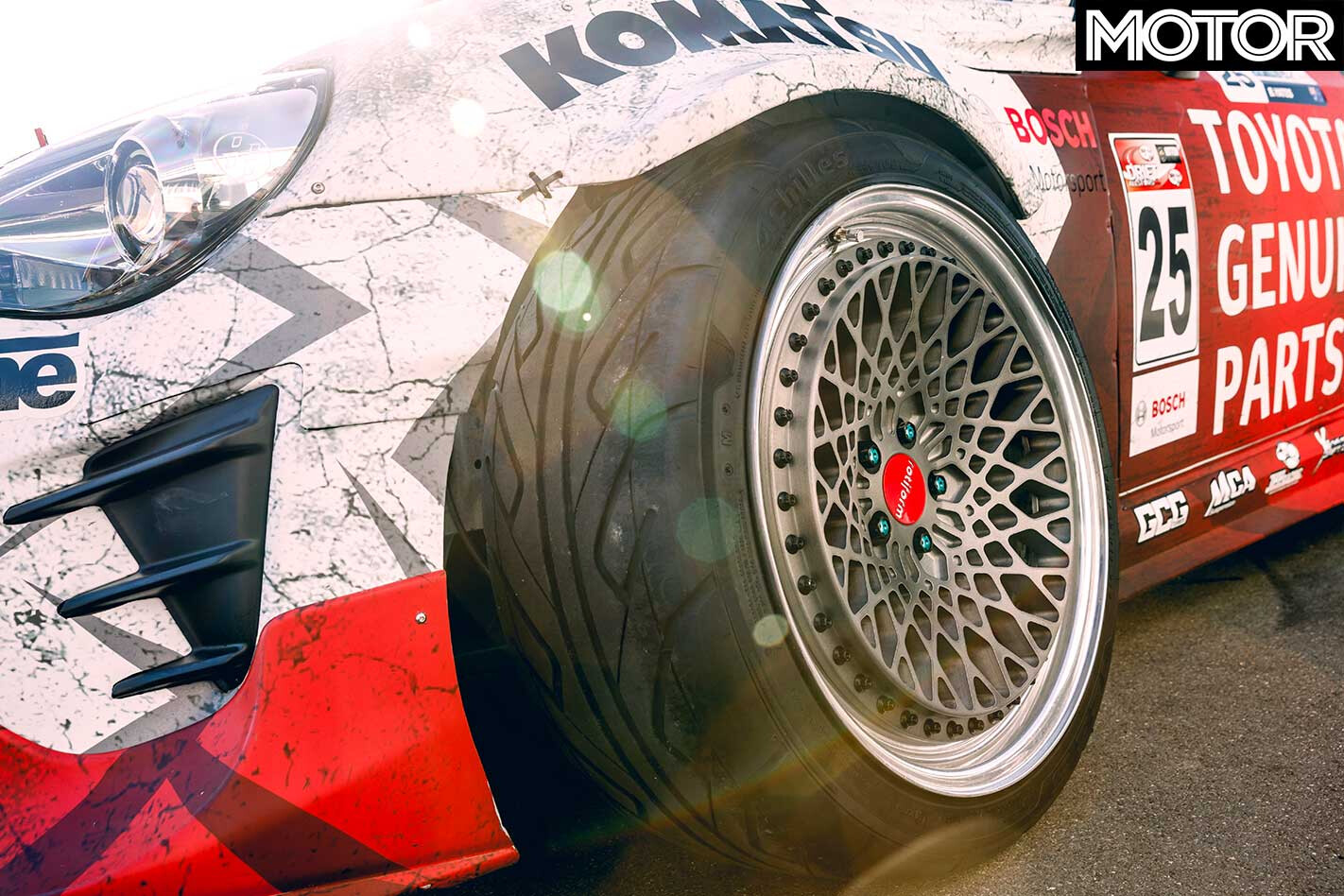 One look at this heavily modified racecar is enough to further trigger one’s fight-or-flight response. Widebody guards front and rear barely conceal bulging, heavily cambered wheels and tyres, the 86’s expanded footprint giving it a predatory stance. The occasional, scarred bodywork reminds that this vehicle does battle, within millimetres, of other drift cars in proper competition.

Yet look closer and this car is also an engineering marvel with delightful, almost artful details all over, from the beautiful welds, to the way it looks – a lot of thought, and care, has gone into the build of this car, and it shows.

Under the vented bonnet, the stock boxer-four is a memory, replaced with a 3.0-litre straight-six (the legendary and battle-proven 2JZ) and fed with an enormous single Garrett turbocharger. A frankly silly amount of power reaches the rear wheels (537rwkW/1000rwNm) via a sequential ’box.

Time to strap into the passenger seat. Inside the stripped-out, caged interior the engine is buzzy and loud at idle. Yates plucks first gear, making a sound like a sword hitting a rock, and jolting the car, his previously calm and relaxed demeanour immediately replaced with focus.

He spits on his gloves and what feels like moments after leaving pit lane, the clutch is in and he’s ripping up the handbrake into Winton’s sweeper at about 150km/h, before dancing the car in one huge, connected drift through turns six, seven, eight and nine, working the brake and handbrake just as much as the steering and throttle in a frenzy of non-stop small inputs.

The engine rages with one of the angriest noises I’ve ever heard, bouncing off its 8750rpm hard-cut almost the whole time. It’s impressive to watch; you could easily imagine Yates drifting the whole track, multiple laps in a row, if the car could do it. (On a warm day, it needs a cool down every five minutes; a new pair of rear tyres are lucky to last much longer than that.)

It’s my turn to show everyone how it’s not done. I’m relieved to find the controls immediately easy to use; clutch forgiving, accelerator precise, giving you a god-like feeling of control over all that power, and whether rear tyres live or die.

There is something unbelievably cool about a sequential ’box, plucking gears with a tug of the solid mechanical lever, and hearing the whine. I drive a few ginger laps of the track to get a feel. With no provocation, the car wants to oversteer into every corner. But it’s friendly; not at all scary.

Even more unexpected, however, is seeing Yates on the pit wall, making wild arm gestures egging me on. But I am not yet brave enough to incite wheelspin in anything other than a straight line. And I’ve never felt a car as eager to completely bonfire its rear tyres as this one.

We hit the skidpan and Yates lays out a witches’ hat course a bit bigger than I’m honestly comfortable with. Almost straight away, however, I’m able to connect the whole course in one big, slightly wobbly, but smoky drift – which is a credit to the car.

To drive, it is, dare I say, easy – benign, fluid and not snappy at all. Getting sideways requires no special skill, such is the tyre-turning power and torque available; and there is so much steering lock, if you cock it up you just steer further into what would otherwise be a spin. It’s the ultimate flattery.

Red flashes up on the MoTeC dash indicating it’s time to cool the car down (the radiator is in the boot). It’s only built, after all, to do battle for minutes at a time. In my case, minutes that will remain vivid and clear forever: Yates’s born-to-drift 86 is easily the most exciting car I have ever driven.