Skoda’s Kodiaq large SUV and Octavia sedan and wagon models tussle with one another as the company’s best-seller from one month to the next, and it’s easy to see why. Both offer a refreshing departure from the norm, excellent features, refined build quality and engaging dynamics without asking a premium for it.

Supply constraints might explain why the Skoda Kodiaq is only just ahead in Australia’s severely SUV-skewed market, but both are still worth a look and have more in common than you might imagine including the price. That said, the genetically related pair are also very different in other ways, too. 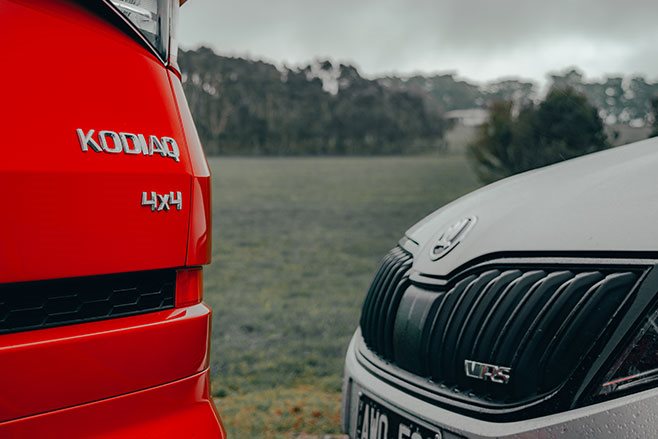 We pitched the Kodiaq 132 TSI Sportline against the Octavia RS245 wagon to see if the latter is still a compelling option that SUV intenders should consider in Australia’s SUV sales tsunami. Both are up for an identical $46,990, so which gets you more for your money?

The Octavia RS is a little known driver’s gem that deserves more recognition, praise and sales than it gets. With the same 180kW turbo petrol engine as the Volkswagen Golf GTI driving the front wheels, it is fast in a fantastically tractable manner.

Add to that a wonderful chassis that manages to be comfortable and rewarding all at the same time and we are already on to a winner – even before you start to look at it practicality package. 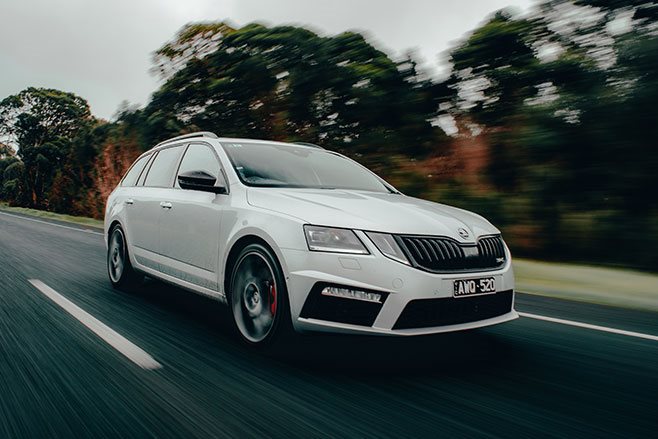 The first thing you’ll notice jumping into its spacious cabin is the beautifully appointed Alcantara (synthetic suede) sports seats that offer a supportive and ergonomically perfect driving position, matched to a perforated leather steering wheel that is equally comfortable.

With so much torque directed through just the front wheels and the relatively large body to haul around, finding traction with full acceleration off the mark can be tricky, especially given the excellent urgency with which the seven-speed dual-clutch automatic transmission responds to hard throttle work.

Once up and running, however, the Octavia is a true joy to pilot. Hit the driving mode button until the large touchscreen says Sport and it gets even better, with a glorious note piped through to the interior and boosted steering and accelerator sensitivity.

There is little that can touch the Octavia driving experience for the same money.

You might think that swapping straight over to the higher-riding and less powerful Kodiaq might be an anticlimax, then, but you would be wrong. It has one of the most lively and sporty chassis and suspension set-ups in the large SUV world and is surprisingly rewarding to push over some interesting roads.

Roll is pleasingly absent and the steering has all the feel of the Octavia wagon, while the Sportline is equipped with an interior that is every bit as lovely as the RS - albeit dialled back to nine on the sporty spectrum. 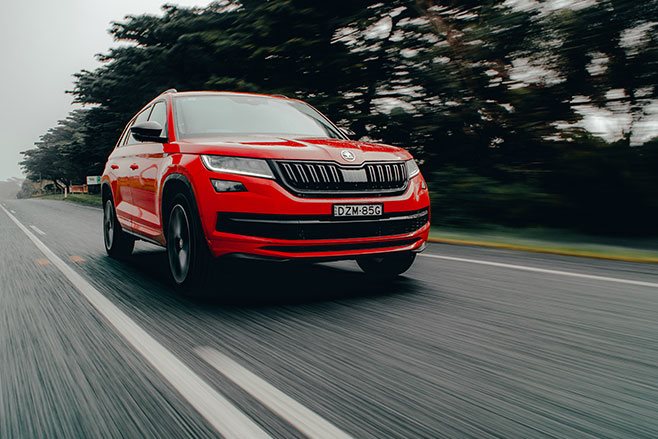 Where it can’t keep up though – literally – is with the Octavia’s power. The Kodiaq also has a 2.0-litre turbo four-cylinder, but it’s turned to develop 132kW and 320Nm. That output is certainly not inadequate and more than enough to serve day-to-day duties, but it is the difference between satisfactory and quick.

Where the Kodiaq has a distinct advantage, however, is in its permanent all-wheel drive transmission which boosts traction for fast road blasts and wet weather, as well as adding a measure of off-road ability that we are yet to assess.

Despite its performance shortfall, the Kodiaq is still a treat to drive and uncommonly good in the large SUV segment. You’ll have to spend a lot more to find something that steers as well and also offers seven seats. It can’t compete with the outright performance proposition of the Kodiaq but it’s still very easy to recommend. 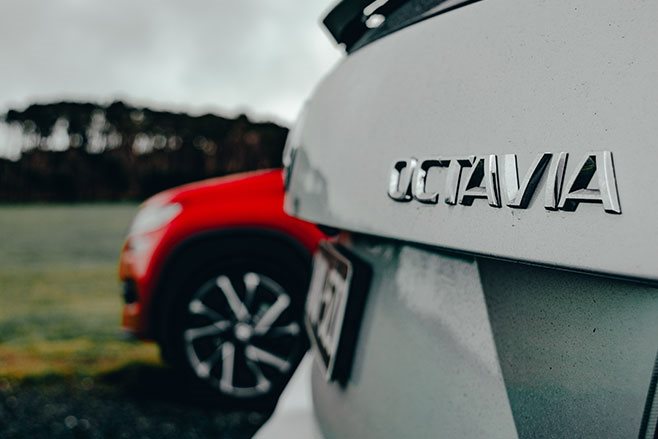 Both of these vehicles offer a seriously attractive practicality proposition but the Kodiaq does steal back some points from the Octavia in this particular battle.

Not only does it have seven seats (the third-row is a useable feature – not the gesture of some other seven-seaters), it has an all-wheel-drive system that has been designed to offer optimum traction on and off the road. These are two big selling points. 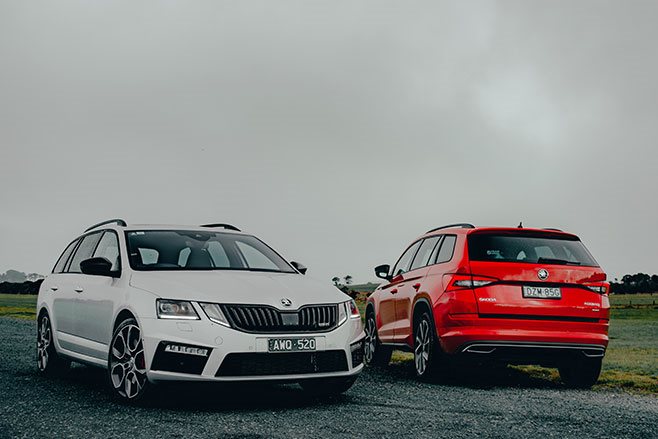 It is also littered with delightful practical features that will have many other manufacturers kicking themselves and saying “why didn’t we think of that?”. Examples include a boot light that pops out and turns into an LED torch, neat little blankets that stow in pouches on the second-row seatbacks,  brilliant door-edge protectors that pop out to prevent car-park damage and umbrellas that hide in each front door – yes, we know Rolls-Royce did this first.

The Kodiaq’s cabin is also full of handy storage pockets that you’ll keep finding over the first months of ownership.

Speaking of storage, its boot can swallow up to 2005 litres of things with the two rear rows of seating stowed, or a still-not-small 630 litres with its five seats in place. 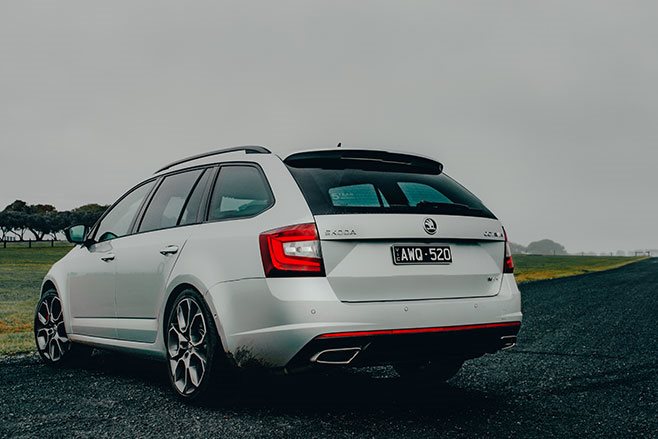 Speaking of spacious cabins, the Octavia wagon punches hard here, too. With all five seats filled, there is still a 588-litre boot at the back and it can expand to 1718 litres with the seats flat. That’s way above the segment average and only serves to highlight the practicality of wagons in the context of SUVs. It even manages to do so without bloating its lovely exterior looks.

With its higher ride-height, the Kodiaq offers the improved view of the surroundings that many SUV proponents (and their smaller passengers) value so highly, but the Octavia’s lower stance is just one of its many aspects that encourages drivers to take the less direct route.

The Kodiaq also has a brilliantly innovative tow bar which is hidden out of sight behind the rear bumper and locks down into place with the press of a button in the boot. To hide it away again you simply press the button again to unlock and tuck it back up again. You’ll never see a Kodiaq with an ugly tow bar when it’s not towing, or a bumper that’s been hacked around to accommodate it.

Both feature a power tailgate, excellent manoeuvring features including a high-resolution reversing camera and parking radar, while the Kodiaq will self-park and there are keyless locking and engine start for both, too. 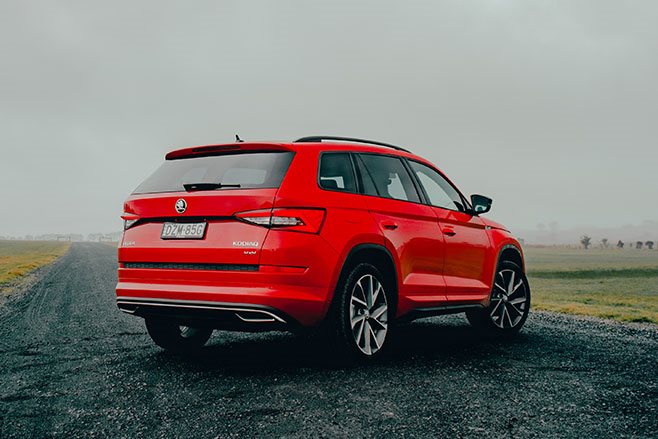 The Octavia’s most recent update also adds the same beautiful all-digital dashboard display as the Kodiaq, which is endlessly useful and yanks the relatively old model right into the 21st century. It really is hiding its age admirably, even among its more youthful stablemates.

Like all Skodas, the Octavia is offered with a five-year unlimited-kilometre warranty, a year of roadside assistance, and long 15,000km service intervals. The first service costs $331 and rises to the most expensive bill of $624 at the 60,000km mark.

ARE THEY WORTH THE MONEY?

In a word – yes. No matter which you choose, both offer a compelling option that packs in a lot for the cash.

Both models will appeal to drivers that want something that stands out for all the right reasons, but without having to pay luxury car prices. In fact, even in the company of some far more premium offerings, this brace of Skodas manages to offer a level of exclusivity.

Perhaps the only black mark against their impressive report card surrounds resale value. As a relatively lesser-known brand, you’ll have to work a little harder when it comes to replacing either, but that applies particularly to the Octavia. 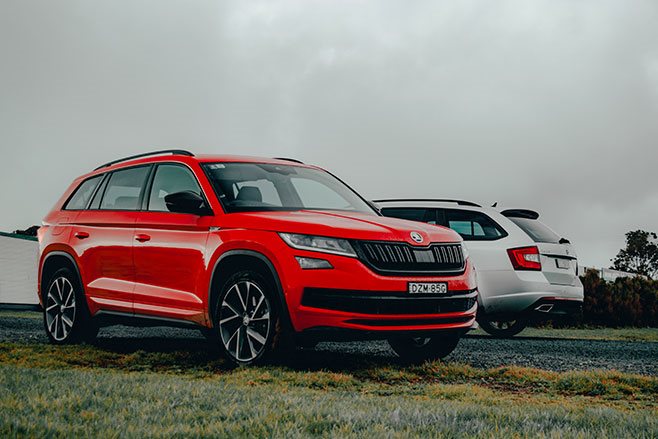 Which one is right for you, if either, comes down to a simple matter of priorities. Both offer a level of driving enjoyment that scores highly in their respective segments, but with the true performance credentials, the Octavia is the car that puts dynamics just ahead of practicality.

It is enormous fun to drive but won’t frustrate you with neurotic racehorse character traits when performing workhorse duties.

The Kodiaq, however, is the Skoda that sneaks ahead with its practicality package, while not neglecting the driving experience. It is still fun to drive with a chassis that is almost as sharp as the Octavia’s, if lacking the power to match it, but offsets that performance deficit with even more bountiful space and some all-terrain promise. 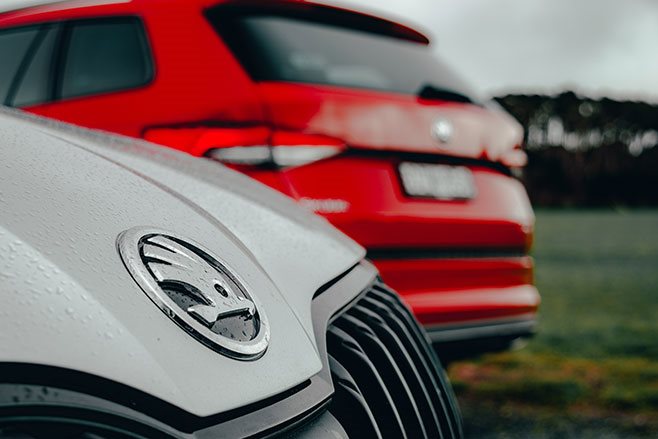