There’s something about electric cars that speak to my inner wild child and set my soul alight. The idea of getting around this beautiful country in a vehicle that won’t contribute to climate change and doesn’t require pushing pedals and sweating my face off gets my insides excited.

My inner-bohemian often daydreams about a barefooted life, with sparkly arm tattoos, salty-wavy hair decorated in flowers, eating organic foods and travelling the coast in a Volkswagen I.D. Buzz concept. I hate to play to a stereotype here, but without a word of a lie, my enviro-warrior self would love nothing more than a country dominated by electric cars.

The concept itself intrigues me. But until recently, I’d never actually experienced driving one. Actually, there was one time I sat in a passenger seat of a Tesla P90D, which I found so befuddling I got carsick and had to ask to pull over. Not a great first impression. Still, fundamentally, I loved it and everything it stood for.

If I confess, though, aside from knowing electric cars are better for the environment, there was actually very little I knew about the reality of living with them. That all changed when last week when I was handed the keys to the funky-looking, 2015 Wheels Car of the Year winner – the BMW i3.

I had grand plans for the little futuristic bubble. We were going to drive to Daylesford for the day and eat some delicious local produce, before spending the weekend on a vegan tour of Melbourne.

The realities of an electric car hadn’t yet set in until I realised the car was sitting in the garage plugged in to a wall. Just because we know how something works, doesn’t mean we actually comprehend it. Until I saw the car, plugged in to a power point charging its battery, the whole concept was, well, a concept. Mind-boggling. It was at the moment, as my car suddenly took form as a household appliance over a transportation necessity, I realised range was something I had to worry about.

You see, I’m one of those annoying people who often leave refuelling to the very last minute thinking I have more range on my car than I actually do (don’t judge me, I’ve only ever actually run out of fuel once). But unlike my car which I can top up with a jerry-can enough to drive to the nearest fuel pump, charging an electric car is not so simple. I can’t carry a can of electricity and even if I could, it’s not instantaneous. It’s a time investment. I’ve not yet managed to charge the i3 enough to get it at full range. Close, but no cigar. 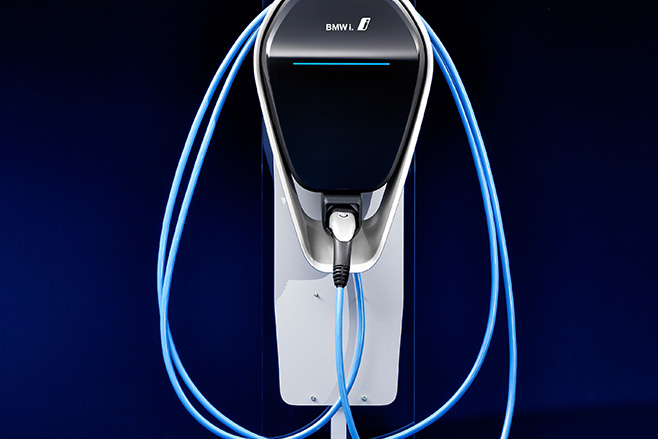 It’s not that this is actually a problem when you own an electric car like the i3. In fact, I could probably get close to two weeks of my daily commute from my house in inner-Melbourne to the office in the south-east of Melbourne out of the little car, before it would need the better part of a day to re-charge its batteries using a normal household charging point.

The idea that it could run out of charge and leave me standard on the side of the road, however, takes a bit of getting used to and enough to cause a little bit of uncertainty on longer road trips. So Daylesford was ditched, as was the vegan tour, and instead, I spent my week using the car as I would normally to see how far I could get out of it. And it’s surprisingly efficient. I charged the i3 on Wednesday, I’ve driven to and from work almost every day since, spent the weekend running around to my usual haunts as I went to yoga, brunch and a quick trip to IKEA in Richmond and I’ve still got around 100km range on the thing, even in the BMW’s ‘Comfort’ mode. Eco Pro ups it to near 130kms.

All that worry was in vain in the end. I could have made it to Daylesford and back on one full-battery. Of course, the new i3 also comes with the option of a range extender for an extra $2000, which will get 70km more juice (of the electrolyte kind) from the battery, which would have come in handy.

Stylistically, though, the BMW i3 is a winner. It didn’t quite play to my bohemian style cues, but visually it combines Captain Planet with the Jetsons as it plays eco-warrior and super geek. Blue tinges to the exterior matched with the interior’s matte carbonfibre chassis and bamboo dash.

The i3 also drives a lot better than I expected of an electric car. It’s agile, offers sharp steering and it’s certainly not slow, reaching 100km/h in just 7.2 seconds, but it feels much faster than that.

And it’s silent. Read any review of an electric car and they’ll tell you they don’t make a noise. But until you drive along narrow Melbourne backstreets, trailing a person, without headphones, walking in the middle of the street (because footpaths are for the weak) for its entire length without them realising you’re driving behind them, the concept is as mind-blowing as it is frustrating!

Despite my initial apprehensions, my love for electric cars has been re-ignited and my inner-hippy, bohemian, wild child has flourished. Even as I write this column, I’ve Googled “how to become a bohemian goddess and travel Australia in an electric car” and purchased a floral crown off eBay.

Do I still hope electric cars take over our roads and save the environment? You bet.

As for my range anxiety, my therapist says it’s only a matter of time before I conquer that irrational fear.