If Apollo 8 was good enough to land astronauts on the moon, they didn’t need to hop out and fix the craft for its return trip.

The same goes for the Volkswagen Polo GTI at Bang For Your Bucks. The addition of two-mode dampers in 2016, at no cost to its bargain price, gave it deadly fangs to sink into the competition. And it ended up swiping second in the sub-$50K category and top honours overall.

This year it seems VW didn’t fix what isn’t broke. This might be because its sizzling replacement is about to land with a bigger 2.0-litre four, but either way, the Polo GTI’s back to defend its crown without an extra arrow in its bow. 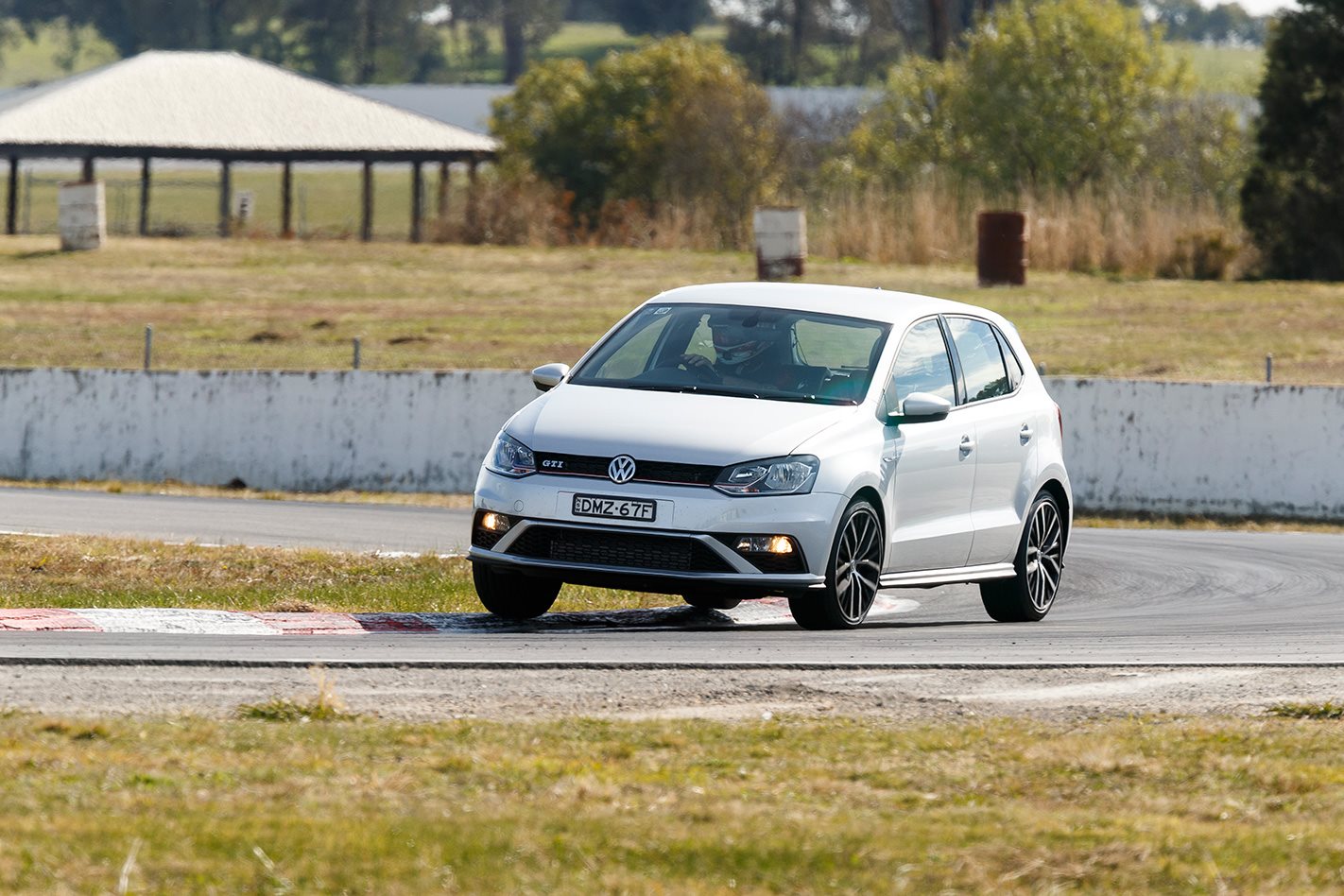 So you can imagine our shock when the formula spat out 2017’s results and perched it on the podium’s second shelf, yet again, with nothing but a $200 increase to its price.

Now, conspiracy theorists might put this down to the formula’s flaws rather than the car’s talents, but let us explain. While the numbers work in dark and mysterious ways, the gist of the formula is to work out how a contender stacks up against the rest.

Which means the field’s average performance is the benchmark to beat every year. Still with us? Good.

Keeping that in mind, consider the Polo GTI has gone from being one of the meekest in the $0-$50K class to one the burliest. Mini’s fizzing JCW, VW’s big brother Golf GTI, or Peugeot’s fat-tyred 308 GTi aren’t here to hold the Polo’s head under water. And it’s used their absence to wreak havoc in track and field. Just peek at its data rankings to the left. They spank its respective third, fifth, and seventh from last year.

Okay, so you might be wondering why this hasn’t shot the baby GTI to the top of this category’s rankings if its sticker price remains so damn cheap. Well, the universe has a funny way of balancing things out.

Without the same big hitters this year, the category’s average price has dropped from $39,219 to $33,891, robbing the Polo of its relative thrift factor.

However, the ankle-biting GTI’s appeal doesn’t only lie in cold, hard data. That turbo 1.8-litre drivetrain not only feels more refined than any other sub-2.0-litre mill on test, but punches harder as well. Its meaty torque band swells early at around 2000rpm and carries past its 6000rpm redline, leaving one judge convinced it’s this Bang’s muscliest hatch.

Of course, ticking a manual box rewards it two-fold. The engine piles on another 70Nm, VW’s seven-speed dual clutch not being able to handle that, and slashes its crucial price. More importantly, though, is it’s filled with nice long second and third gear ratios. 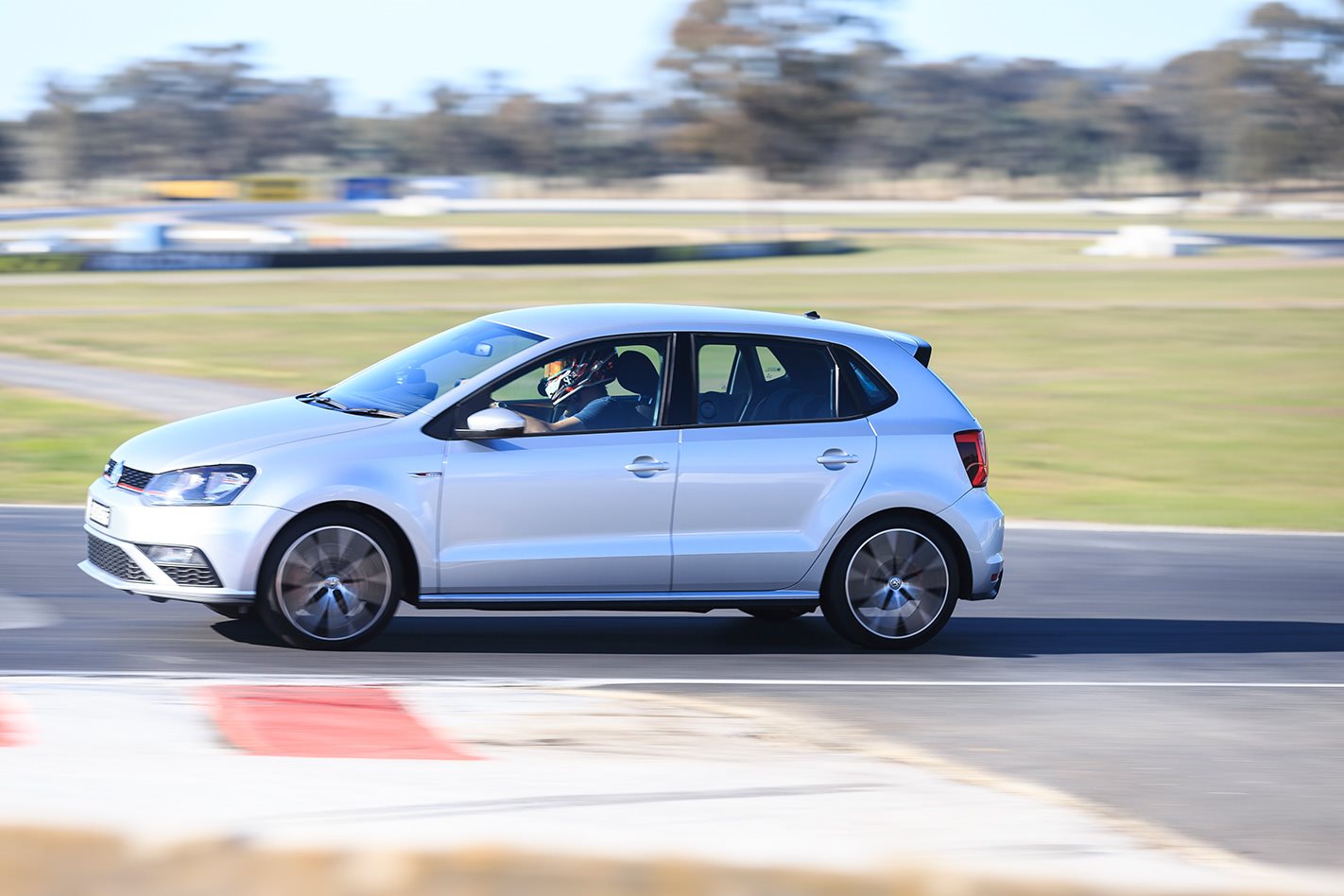 As a result the Polo happily holds third gear down the back straight into the braking zone, past where other cars start headbutting their limiters.

What doesn’t change with transmission choice is a solid chassis underneath the baby GTI. VW’s engineers must have hacked into the Porsche suspension department’s computers because the Polo’s dampers strike a brilliant balance between suppleness and feel.

This gifts the Polo ample grip in the bends and means it never feels like it’s going to bite. The handling setup feels tuned for stability, rather than liveliness. Although some judges reckon the GTI could channel its inner WRC if Volkswagen wound back the stability control’s intrusiveness. 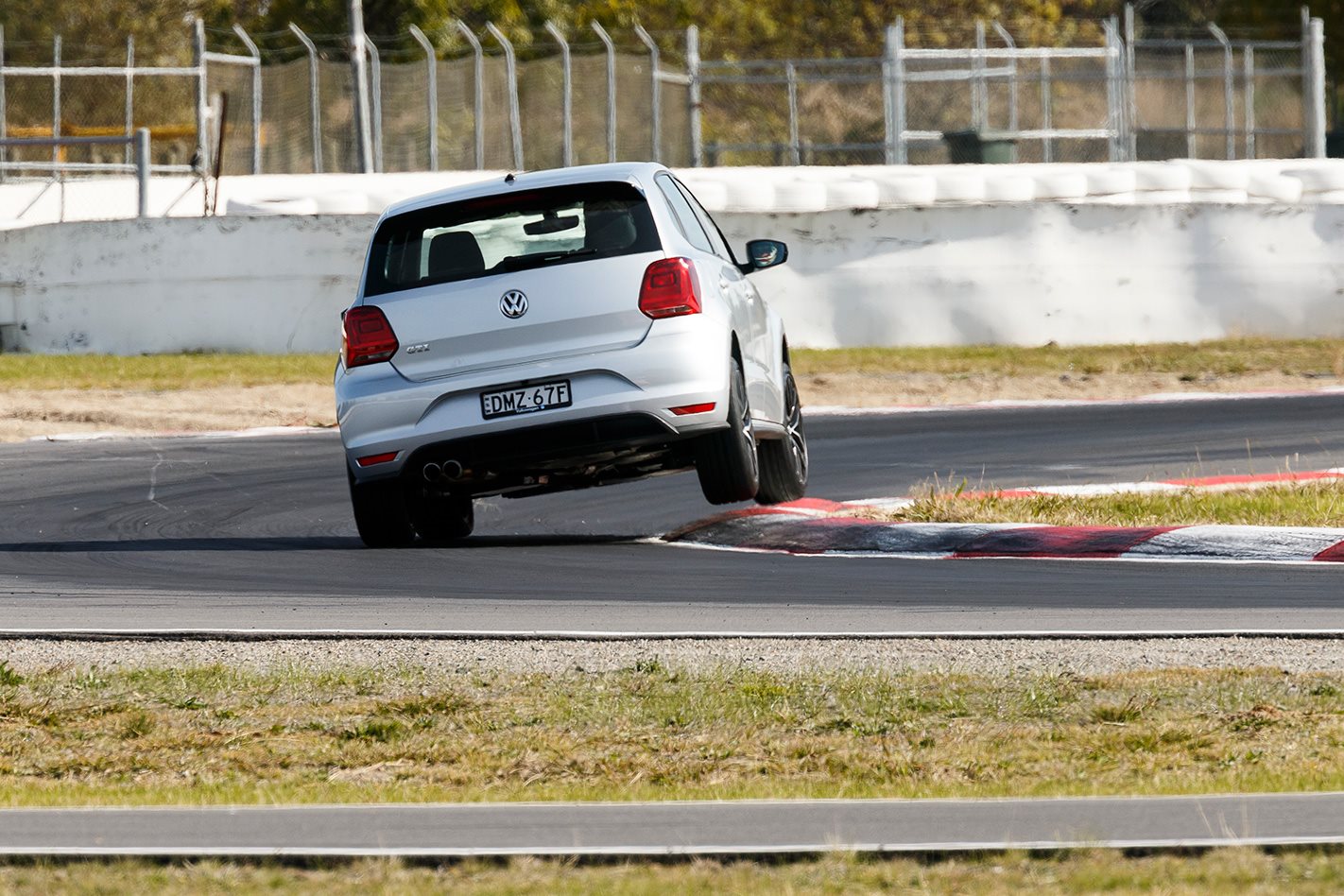 Similarly Germanic are the little things that add up to define its character. That gearshift is involving enough, even if it doesn’t slot like a Fiesta ST’s. The EA888 four-banger growls and hisses, but ultimately sounds like it’s hard at work rather than here for a good time.

No surprise then the Polo GTI rewards clinical driving. Those front tyres have a hard enough time trying to tame such grunt with an ABS-based diff system, and early throttle will push the nose wide. But drive it cleanly and it’s a blast to punt around.

All in all, though, a category win just wasn’t to be. As new foes shifted the focus from price to performance, the little Polo GTI washed up lacking in the shadow of all but one contender. There is, however, always the top-gong to go. And if history’s any clue, the Polo GTI could be passing by the sub-$50K second place on its return trip to overall numero uno. We’ll just have to wait and see.

WARREN LUFF SAYS
“It’s been a mainstay of BFYB over the years and is still a worthy contender today. It’s so much fun out there, it does everything right, and feels like a traditional hot hatch.
You can slide it in with the rear of the car. You can feel the electronics wanting to come back in but it’s not too bad. It gives you that fun factory along with the reassurance it’s there to catch you if it goes too far.
The brakes are good. The seating position is fantastic. You can get nice and low and feel like a part of the car. Will be toward the top again this year no doubt.”

JUDGES NOTES
David Morley - 3rd: “Pretty grown up for a tiddler. Good combo of ride and handling.”
Dylan Campbell – 5th: “Love it to bits and would own one, I just had more fun in other cars”
Louis Cordony – 4th: “Grippy chassis and grunty engine make an accomplished ankle-biter”
Tim Robson – 3rd: “I’m a front-driver man, and I’m a big fan of the GTI. Lots of heart.”