‘OLD SCHOOL’ isn’t a descriptor one would usually apply to a cutting-edge, $400,000 flagship supercar from Audi, and yet, in the context of this year’s Car of the Year field, it’s apt. Alongside the other piece of lotto-prize exotica on hand – the fiendishly complex hybrid-powered Honda NSX – the recipe for Audi’s second-gen R8 is decidedly conventional: big, aspirated engine in the middle, four-wheel drive, and styling that, initially at least, looks more like a rehashed version of the original than something new-gen. 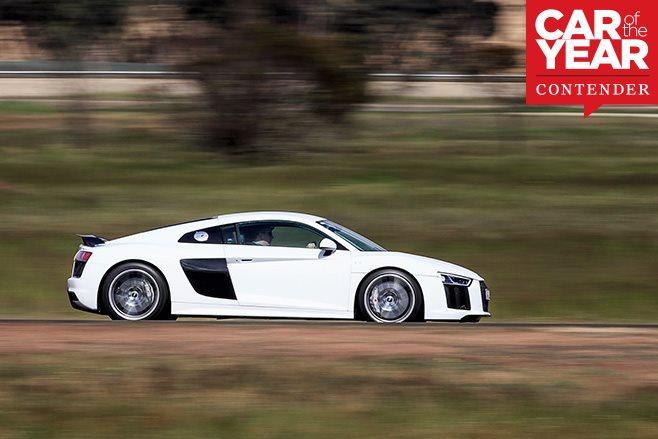 And yet, it’s precisely this simplicity, this dynamic honesty and the R8’s instant sense of hardwired connection that won so many hearts among the COTY judges.

Two power outputs are available (see specs, left) though only the more rabid Audi R8 Plus version, which hones in on its 8700rpm limiter with a frenzied fury missing in the standard car, was on-hand at COTY. Plus versions score a firmer, fixed suspension set-up, extra lashings of carbonfibre inside and out (including that fixed carbon rear wing), fixed sports seats and standard carbon-ceramic brakes. 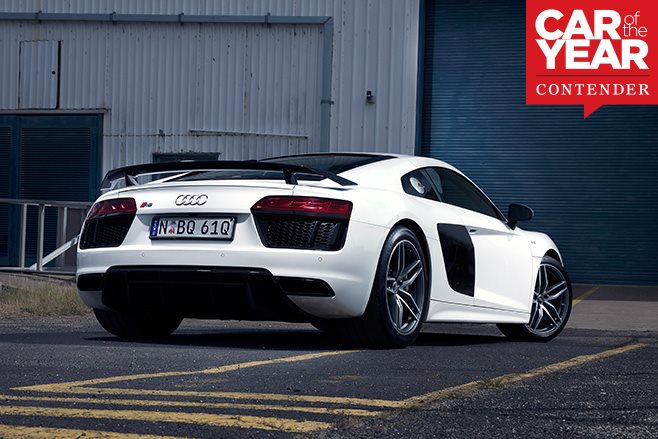 Despite the additions, judges who had driven the regular V10 Coupe argued that it’s potentially the smarter buy, due to its marginal loss in performance, softer, more comfortable suspension and $35,000 saving.

In both cases, Audi’s engineers have nailed the dynamics. R8 V2.0 is lighter and 40 percent stiffer than before, thanks to a chassis that’s now 79 percent aluminium and 13 percent carbonfibre, and the result is an out-and-out supercar with a stunning breadth of ability. 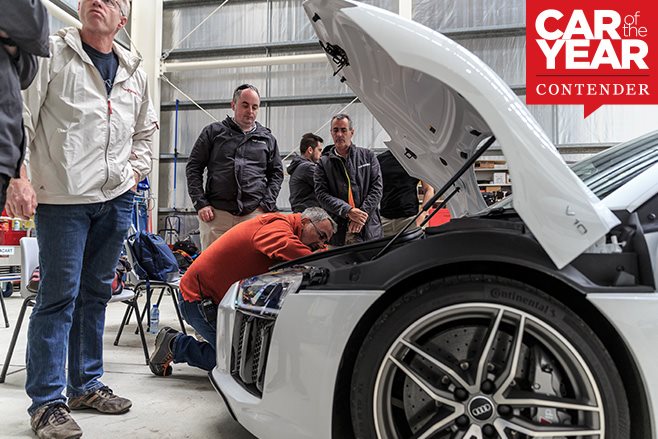 And while the R8 feels alive at, or even beyond, its limits, it’s just as capable at cruising in city traffic in relative comfort thanks to suspension that’s supple enough and excellent visibility. The redesigned interior was singled out for particular praise too, thanks to its stunning combination of quality materials, futuristic design and intuitive ergonomics.

Where the R8 begins to stumble, however, is in the efficiency stakes. The double-edged sword of retaining that atmo heart means the V10 Plus slurps 12.3L/100km, despite Audi’s claimed 13 percent fuel consumption improvement over the first-gen car.

It’s arguably not that great against the technology criterion either, even with its carbon-infused chassis, laser headlights and standard inclusion of Audi’s excellent Virtual Cockpit. While these additions bring welcome advances, this new car feels more like an excellent refinement of the original R8 recipe, rather than a step-change with genuine innovation. 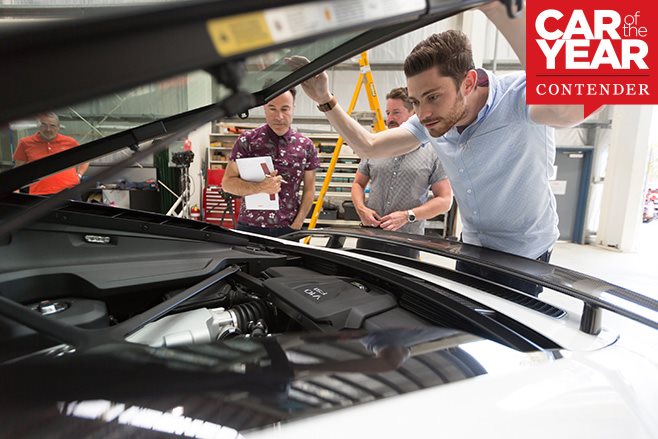 Which brings us to value, where, as is normally the case with supercars, the law of diminishing returns raises is ugly, serpentine head. Compared to the similarly priced NSX, though, the more conventional, more accessible R8 is the more engaging, and the judges’ pick, even if it is less technically advanced.